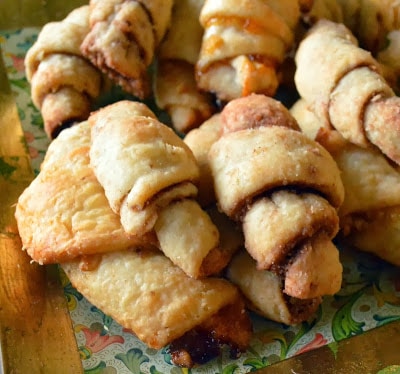 I  must confess. I made these for Yom Kippur with those cute kadaif coconut squares. I was too busy focusing on the kadaif that I forgot about these darling rugelach.

My mom didn’t bake them and they weren’t found in the big K3. I bought them in the grocery for my kids in virtually every flavor imaginable. They were very good but not as good as these!

Hanukkah meant fried foods to me. Hanukkah meant latkes. Donuts are traditional but we never had those as a child either. At least not for Hanukkah.

I do remember going to Bell’s, which might have been the first Target, standing on a ledge, craning our necks to see into the big window, so we could watch the man making fresh donuts. This was exciting!

I think my mom bought me my first Barbie there. And we always bought the donuts. But I don’t remember them being for Hanukkah. They were for eating the minute you got in the car.

Croissant shaped pastries in Poland were called rogale and pronounced similar to rugelach.

Other books say that these were shaped like the crescent on the Ottoman flag and were created in 1793 to commemorate the lifting of the Turkish siege of Vienna. Rugelach, Shumegelach. I don’t care. Just know that these are one fine tasting pastry.

The problem with this post is that I thought I had more photos. I was too busy focusing on the kadaif that I didn’t take enough rugelach pictures.

I seem to remember thinking that I would do it on another day and I guess another day didn’t come and then we ate them all. ALL. ALL of these. They are that good.

And they would travel well, in case you want to send them on their merry way. We didn’t. Because we ate them all. But you know that already.

I know my aunt made rugelach because weirdly I remember her telling me about this great cream cheese pastry that made these so simple to make. She was right. They are simple.

She knew about rugelach because she grew up in Chicago. Living in Kankakee, we were kind of the country bumpkin Jews.

We didn’t have access to delis and Jewish groceries and I never even knew what a JAP was until I went to college. But I digress.

So why did I wait so long to bake these? I guess I was busy frying donuts. And buying rugelach at the grocery.

Well, Manservant fell in love with them. He always liked the ones I brought home from the store, but he liked these WAY better.

The fillings that can be put in these are endless. They are perfect in the morning for Manservant to drink with his coffee. He begged me to put some in the freezer, but I guess that didn’t quite happen. Because, I will repeat this again. We ate them ALL.

I must make them again. They last a long time. The cream cheese helps keep the dough tender and also makes them easy to roll out.

Sour cream rugelach and yeast raised rugelach were popular in Europe.  The addition of  cream cheese was an American invention. It was a good one.

There are so many variations on this cookie, you could always be inventing something new. I used browned butter to brush on them and was happy I did. But no worries. You do it your way.

I’ve even seen savory rugelach inventions with cheese and onions or potatoes. But I am happy with the standards.

Apricot, chocolate, raspberry, cinnamon. I could go on. But I must get to work baking a new batch. I want to eat them ALL. 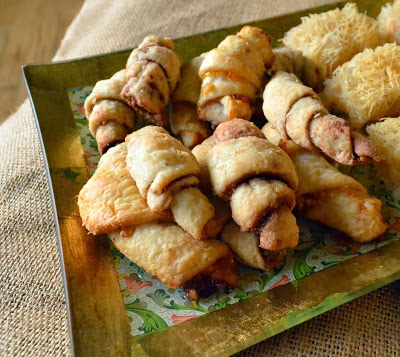 Beat the butter, cream cheese and sugar until light and fluffy. Add the salt. Gradually beat in the flour. (I use a clean towel and drape it over my mixer while adding the flour so I don’t create snow in the kitchen.)

Divide dough into 4 equal portions, form into balls, wrap and refrigerate overnight. Let the dough stand at room temperature until workable. (My refrigerator keeps things sometimes too cold, so I often stick it in the microwave for about 10 seconds-power level 4, a few times until workable.)

Position a rack in the upper third of the oven. Preheat oven to 375.

On a lightly floured surface, roll out each piece into a 1/8 inch thick round about 15 inches in diameter.

Combine the nuts, currants or raisins if desired, sugar and cinnamon. Brush the dough with the butter and then the jam if you are using. Sprinkle with the nut mixture, leaving a 1/2 inch border around the edges.

For large rugelach, cut each round into 8 wedges; for medium, cut into 12 wedges, for small, cut into 16 wedges. Roll up wedges from the wide end toward the point, pinching the point to seal. Gently bend to form crescents.

(You can now freeze these for several months. Defrost before baking.)

Place the rugelach on ungreased baking sheets. Bake until golden brown, about 20 minutes. Let the cookies stand until firm, about 1 minute, then transfer to a wire rack and let cool completely. Store in an airtight container at room temperature or in the freezer.

Notes: Rather than filling you can also roll the dough on a surface sprinkled with a 1/2 c of sugar and a 1/2 t of cinnamon. For chocolate rugelach, you could use Nutella or chocolate chips in the middle OR substitute 1/2 c of cocoa powder for the cinnamon and brush the dough rounds with the 1/4 butter, but not the jam.)

*Does not include chill time for the dough.

Love the combination of flavours, I would imagine they are very tasty

omg, w-o-w, wtf , will you be my new bff???? and LOL. I'd eat every one of these too. What a fabulous recipe and thanks for sharing this one.

rugelach! probably my most favorite treat, especially with apricots inside. i've never successfully made them, but i've attempted them in holidays' past. this year, i'm ready to give it another go, and i'm using this recipe. our family always made "kiffle," which from what i can tell is a slightly different, Romanian version of the rugelach which uses sour cream versus cream cheese. both delicious, both equally unattainable in my kitchen...so far. :) wish me luck, Abbe. :) yours are gorgeous.

These are such delicious looking rugelach, and do I have to say how much we all love rugelach?? :)But i confess - I've never made them before.....

There was a coffee shop in my old neighborhood that served the best rugelach. I couldn't walk past that place without stopping for one. My mouth started watering, Abbe, when I saw this post's title. I can see why your family ate them all. They wouldn't last long here and I live alone. :)