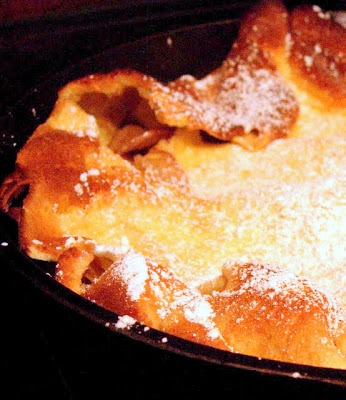 My morning started out rough. My car didn’t start. I think it felt ignored the last 6 days as I didn’t venture out because of the COLD weather. I am sorry car, but you made me miss the Macy’s morning sale. Now I will probably have to buy you a battery, but I don’t think Macy’s sells those. So instead of being at Macy’s I am now at home writing this blog. It is a good one about German Apple Pancakes and the person that inspired them. Think of this my readers, German Apple Pancakes 1, Macy’s 0.

Many people call German Apple Pancakes Dutch Apple pancakes, but they are the same thing. One article I read said that Dutch had a warmer ring to it than German. What can I say? In my background it was definitely a German pancake made by a very special third grandmother. Now keep in mind that I never tasted this special pancake made by my special grandmother. I have only had the pleasure of hearing about it. And when it was mentioned it was mentioned with awe in the voice. I really believed that this pancake must have been a miracle. So years ago I discovered a recipe about this pancake called a Dutch Baby. I actually make it quite often as it is very simple to make. And it is awe inspiring when you see just how simple it is. You can actually measure everything except the butter in 1 4c measuring cup. So this equates to not as many dishes to wash which to me is a very good thing!

Now I don’t know if this is as good as my Ilse used to make, well actually I do know, because nothing could ever be as good as your Grandma could make; but when you make it just think of her. She would be proud. 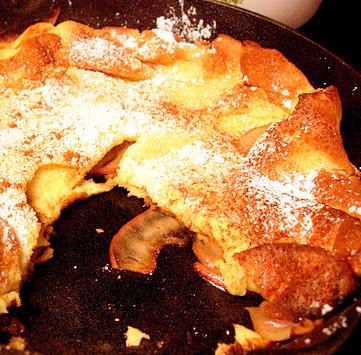 I make this in a cast iron skillet.

They have a delicious apple pancake at the Original Pancake House if you are so lucky to have one in your neighborhood.

It can be made with or without fruit. I think pears would be a nice change if I ever had any in the house.

If you don’t make this with fruit, squeeze lemon wedges over the top and serve with preserves.

I make this a full meal and serve it with candied pepper bacon and my favorite hash browns. 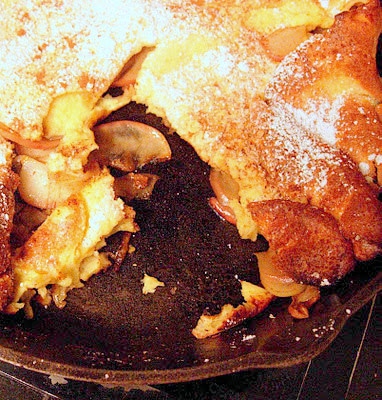 Melt 3T butter in skillet. Add apples and sauté until tender, about 10 minutes. Stir in dark brown sugar and cinnamon. This should be nice and syrupy. If you want more cinnamon feel free to add it.

While apples are cooking measure dry ingredients for pancake into your 4c measuring cup. Add the eggs, milk and vanilla and stir or whisk until well combined. Add the melted butter and whisk in well.

Pour over the prepared apples and bake for 15-18 minutes, until puffed and golden. If you would like more sugar and cinnamon on the top, feel free to sprinkle more on top of pancake about 12 minutes into cooking when it has just started to puff.

Cut into 4 big wedges and serve with maple syrup. You may not need it. Oh-don’t forget the powdered sugar. 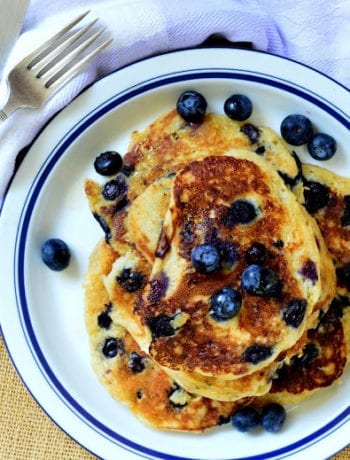 Blueberry Pancakes on the Day of your Birthday 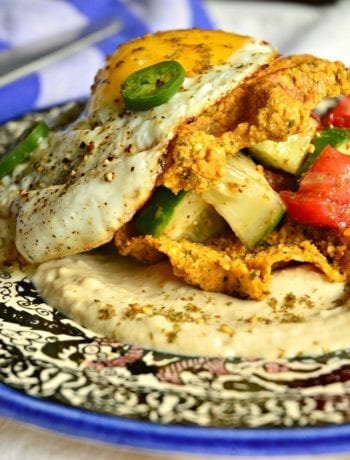 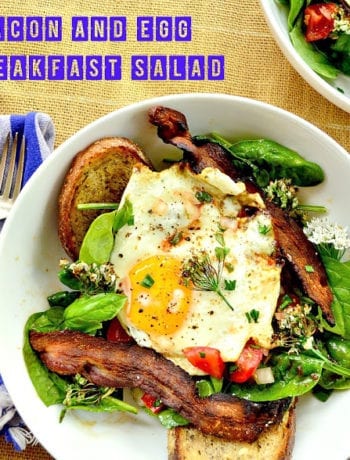