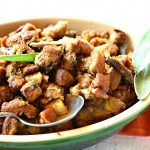 Pepperidge Farm Sage and Onion Stuffing was classic Thanksgiving fare in my impressionable years. In fact it wouldn’t have been Thanksgiving without it! 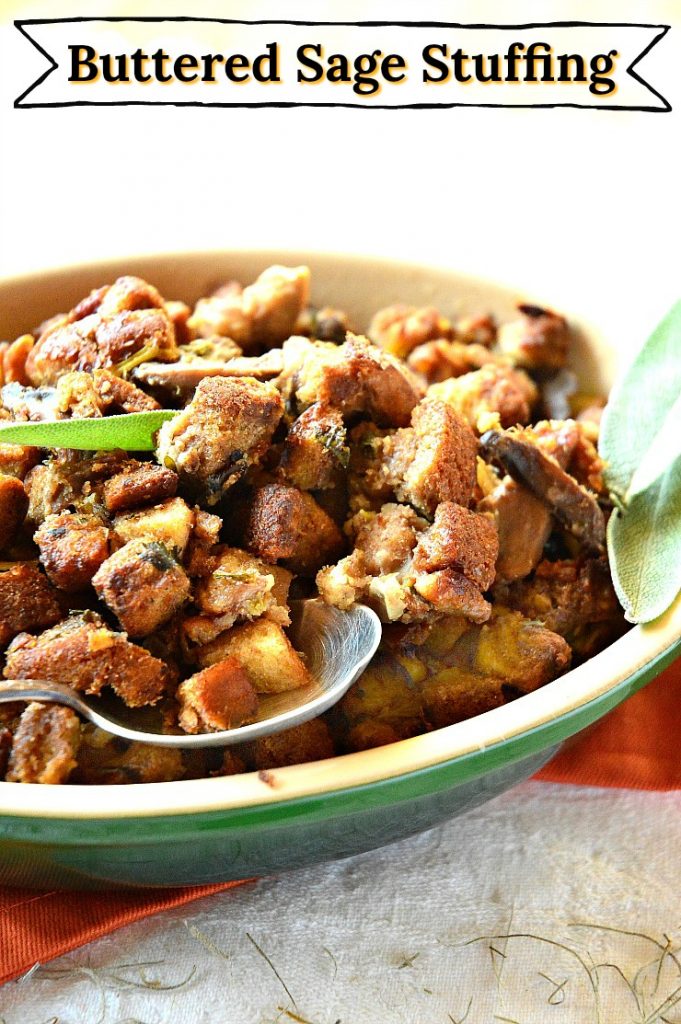 There are some things that never change and Pepperidge Farm stuffing with sage and onion is one of them.

Growing up Mom always made Pepperidge Farm stuffing, even though it was dressing, and it was only when I left home and met Manservant that I started making our beloved tamale stuffing. Mom arrives Tuesday for Thanksgiving and I decided this year to stick with the classics. Yes, that would be Pepperidge Farm! My mother even offered to make it!

SO, what’s the difference between stuffing and dressing?

Stuffing is what goes in the bird and dressing is what stays out. Dressing is cooked in a pan and is outside of the turkey.

So technicalities aside, I always call this well seasoned bread mixture stuffing, because when I think of dressing I think of salad. And we all know that salad is the least important part of the traditional Thanksgiving feast!

Homemade stuffing is also at the top of my list, but let’s get real here. Sometimes we all need a break and even though stuffing is pretty easy to make, everyone needs a shortcut. This year, this Pepperidge Farm stuffing is mine!

So a few notes to the cook: My mom always bought the big bag. We always buy the stuffing cubed. She always sautes celery, mushrooms and onion to add in and she bakes this uncovered in the oven because we prefer our stuffing crispy.  Yes, you can add sausage but good Jewish households never added sausage. But feel free to stir in raisins or cranberries or fennel or apricots, or apples. Stuffing is so about you! 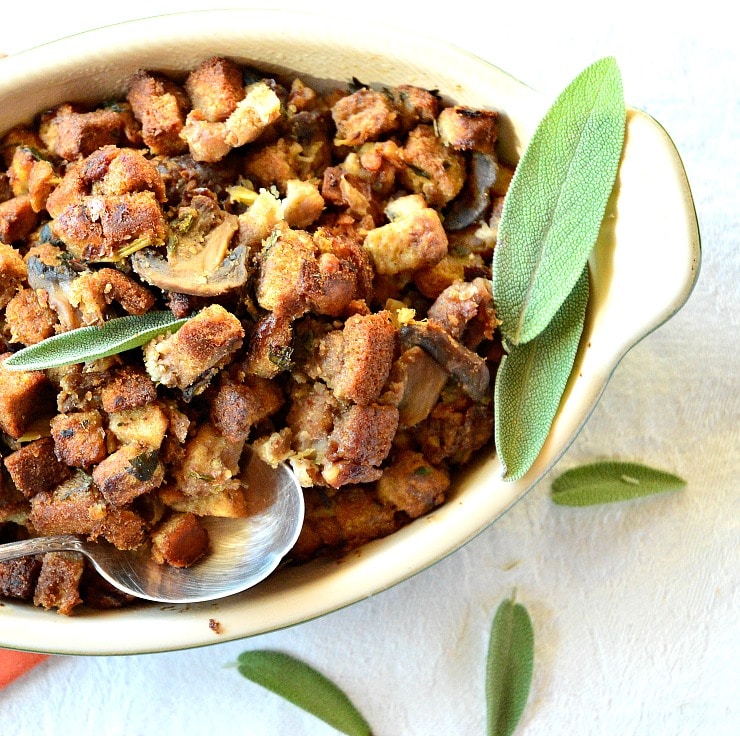 If you like your sage stuffing moist, well, that’s what gravy is for! Just remember that if you have an old bag in the pantry, get a fresh one for the new season. Herbs and seasonings lose their flavor as they get older.

Want to really jazz your stuffing up? Add these fried in browned butter sage leaves as a garnish and everyone goes crazy. (They come with a great squash recipe!) They might even ignore the stuffing!

I always bake my stuffing in a 13 x 9 pan but feel free to use whatever size pan you like. We like ours crispy and if I pack it into a smaller pan it remains moist.

Stuffing can also be baked in muffin cups and then  served individually. That way everyone gets a little crispy and a little moist and no one fights for the corners and sides!

Why is dressing the key to turkey? The answer lies in the first bite. Manservant is very good at smoking turkey.  But every now and then if you are a white meat lover like I am, you sometimes get a dry bite. Hmmm. 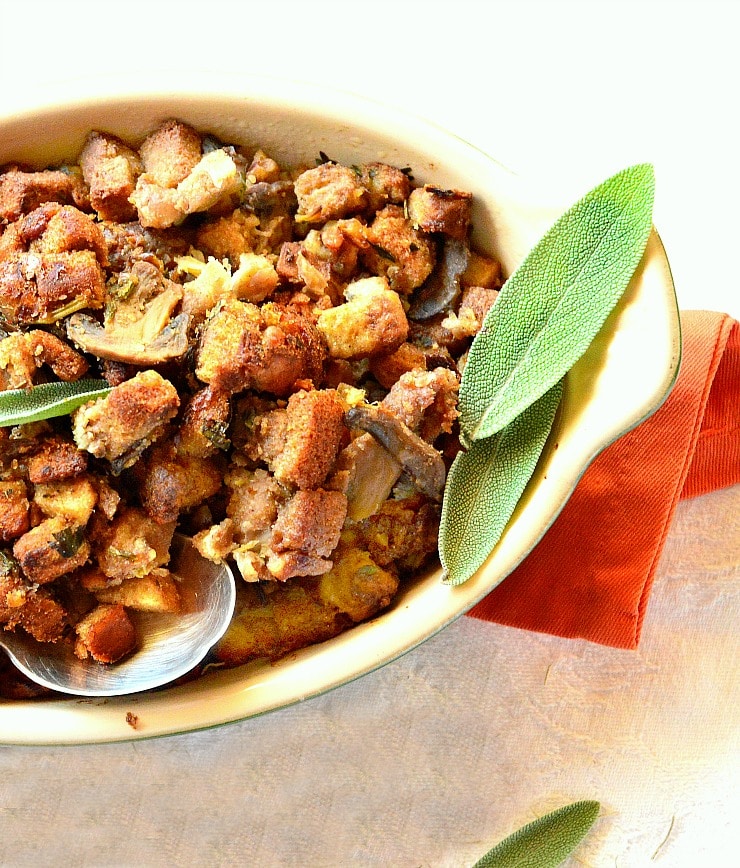 Stuffing is also the key to the morning after breakfast. Heat that stuff up and plop on a fried egg. Get the fork and dive in. This is one reason I make stuffing throughout the year. Yep, breakfast with stuffin’ is a winner.

You can even make stuffing patties like I did in this delish Kentucky hot brown “sandwich.” Eating stuffing straight from the fridge is also something I’ve been known to do.

So whether you call it stuffing or dressing, use cornbread or whole wheat, sausage or not, I hope you agree that stuffing is the key to turkey. As for the best way to make it,  I’ll leave that up to you! 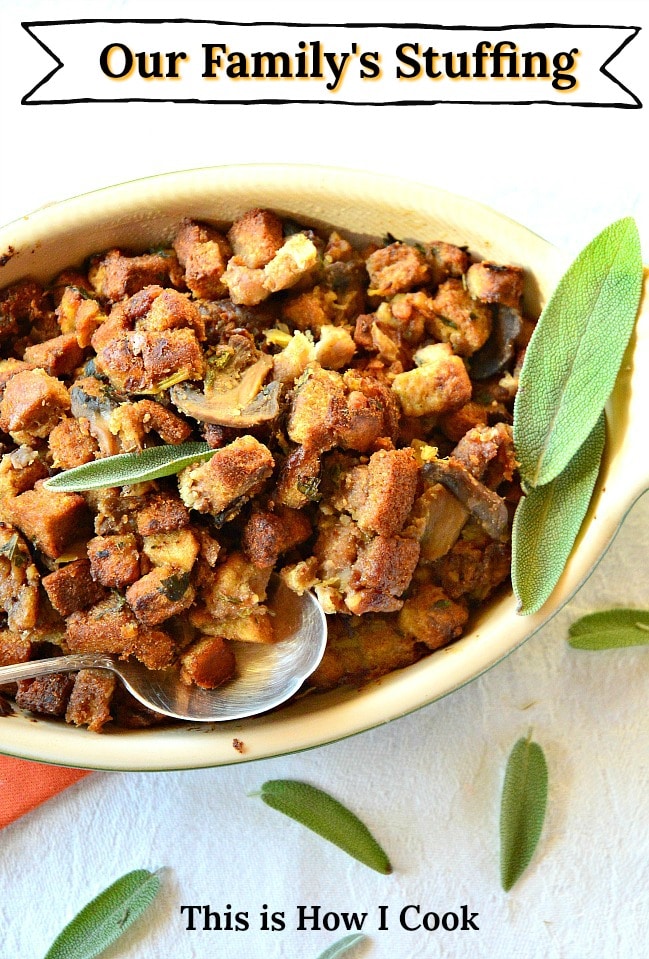 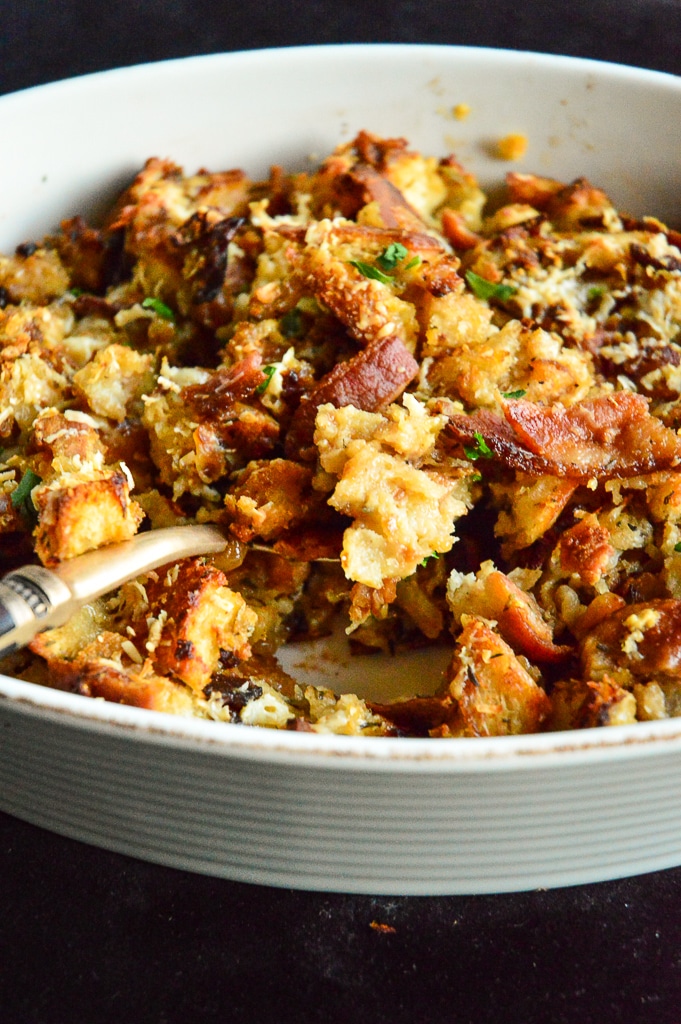 Tamale Stuffing with Raisins and Chorizo and Cornbread 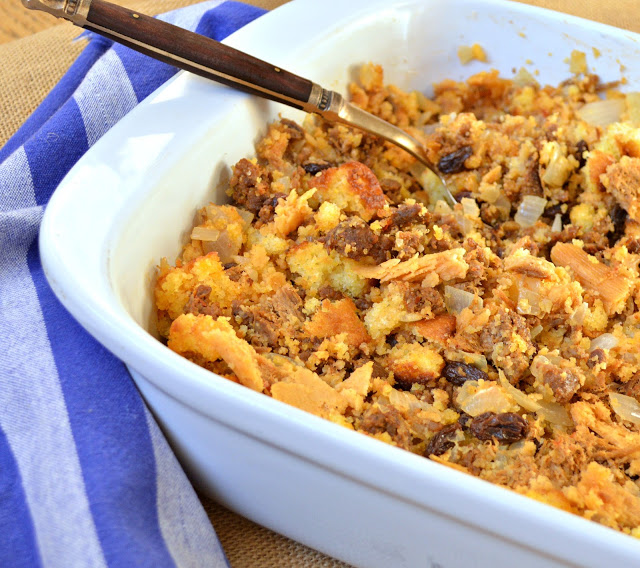 Pepperidge Farm stuffing is the key to a great dinner. Always a hit and a time saver!

Heat 4 T butter in a large skillet. Add onion, celery and mushrooms. Feel free add in some dried, but reconstituted mushrooms also. They give great flavor.

To make ahead: Cover unbaked stuffing mixture in pan. Refrigerate for up to one day. Bake as directed but add time if stuffing is not at room temperature.

My cranberries are always a hit! 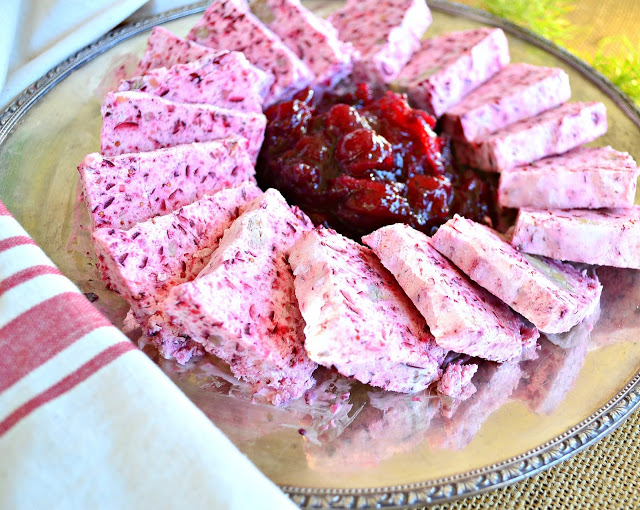 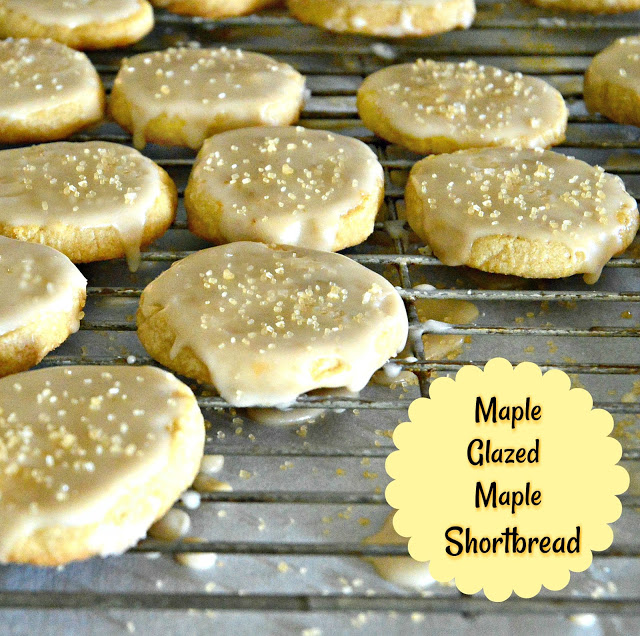 Want all my Thanksgiving recipes in one spot?

I even added more! 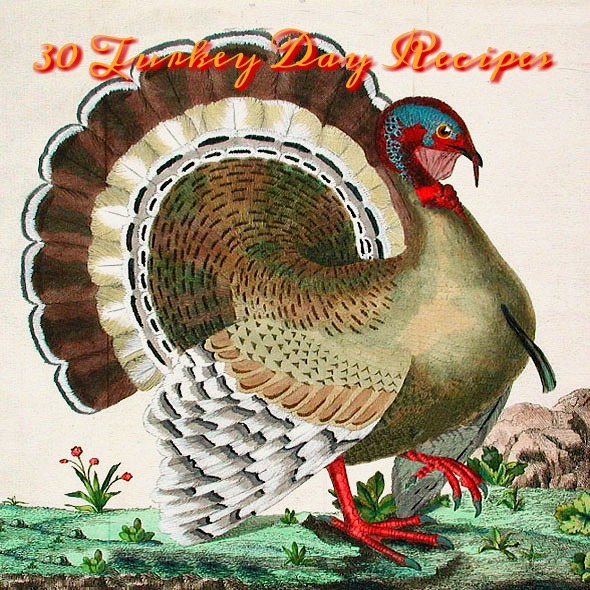 It looks delicious! Mom always added eggs to it, making it moist and good. I basically make it your way. The Hot Brown---I grew up in Louisville and enjoyed that at the Brown Hotel many times, never with stuffing but I just might have to try that now. Thanks!

I love Thanksgiving traditions! I still make my mother's stuffing which is like meal in itself with the addition of a small amount of ground beef and always stuffed inside the turkey. The sage and onion croutons are a must because that's what my mother used too.

This recipe is perfect! Have a fabulous Thanksgiving Abbe.

Thanks Lea Ann. Can never ignore those family traditions!

TBH, I am not really into the turkey thing, but I ADORE all sorts of different stuffings :-)) This looks like a winner to me, Abbe.

Stuffing is so good. And we all know great minds think alike!

Crispy stuffing for me, too. Well, the top of it -- I'm OK if underneath all that crispness there's a bit of moist stuffing. Nice to have choices. :-) Stuffing is the best part of the meal. That and the leftovers. Anyway, yours looks nice -- I like the addition of mushrooms. Gotta try that!

Mushrooms give so much flavor, which I know you know. Leftovers are what it's all about, right?