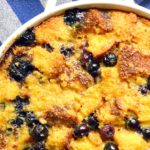 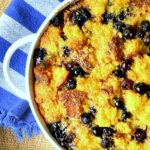 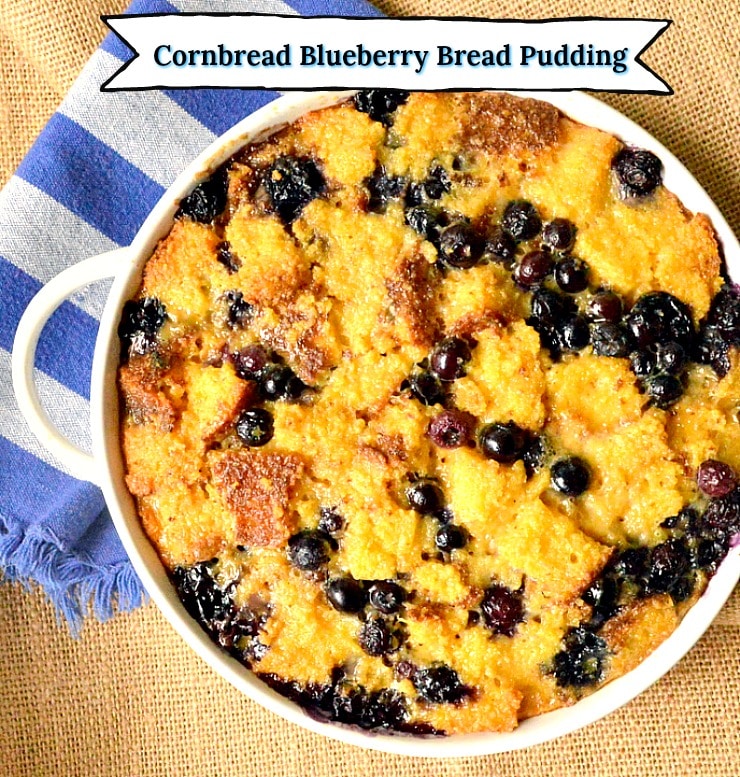 All is well in the world. You know that, right? Except when one has leftover cornbread, which happens quite often with just two in the house.

Never one to leave anything go to waste I experimented with corn bread bread pudding.

No, I am not the first, after searching Google on what I thought was an original idea.

Well, it is a brilliant idea, but I guess I wasn’t the first to arrive at this conclusion.

In any case, corn bread and blueberries are a perfect combo of flavors.

Cornbread is actually a quick bread with Native American origins. It is usually leavened with baking powder.

With the colder weather I am finding the need to make more chili. Manservant loves chili.

And when he has chili he wants cornbread. It’s so easy to make, that I never buy a mix.

Yes, I do make the recipe on the back of the container. Often I increase the sugar to about 4 tablespoons but that is up to you.

A dash of vanilla extract is great if you are using your cornbread for dessert and even if you aren’t. 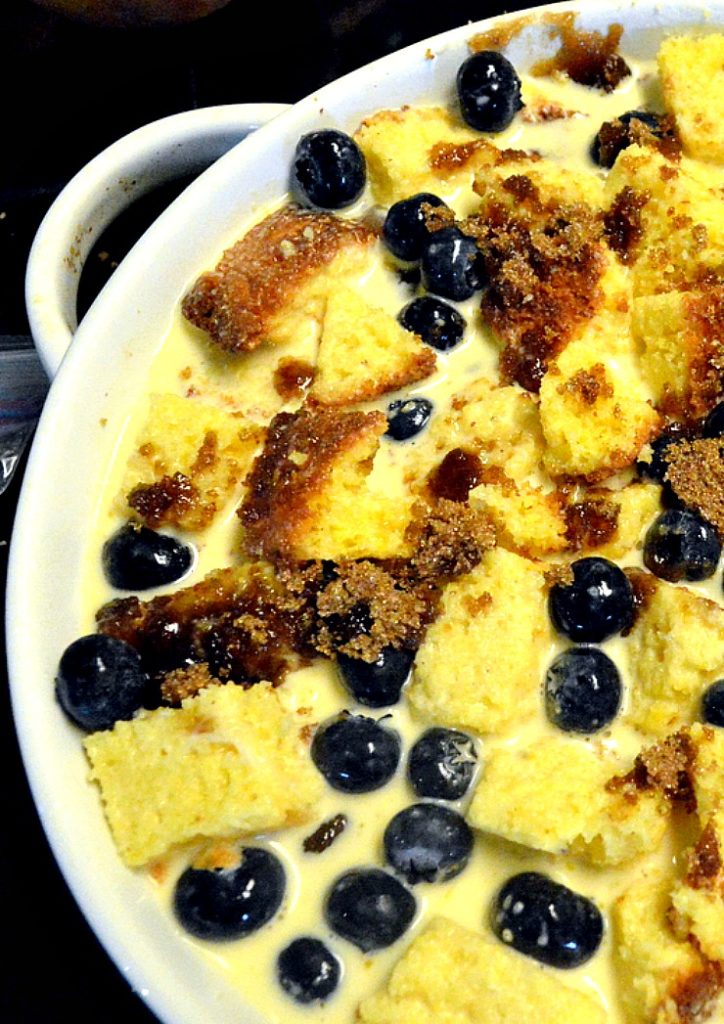 Don’t forget some honey butter with your cornbread. Or just honey and butter will do.

And if you want a new taste sensation, top your honey butter with smoked salt. It makes cornbread amazing.

So, what to do with leftover cornbread? Yes, cornbread makes great croutons.

I use them in this macho salad which I just adore. I think the cornbread croutons are a big part of this!

Cornbread crumbs are also great as breading on anything you would use cornmeal for.

But my favorite way to use cornbread is in this bread pudding.

Blueberries and cornmeal are a match made in heaven, but I have no doubt that cherries would taste great, too.

And of course the Jack Daniels peach topping is perfect for taking this cornbread bread pudding  over the top.

This was a big hit with the in laws and Manservant.  I know you will like it, too. 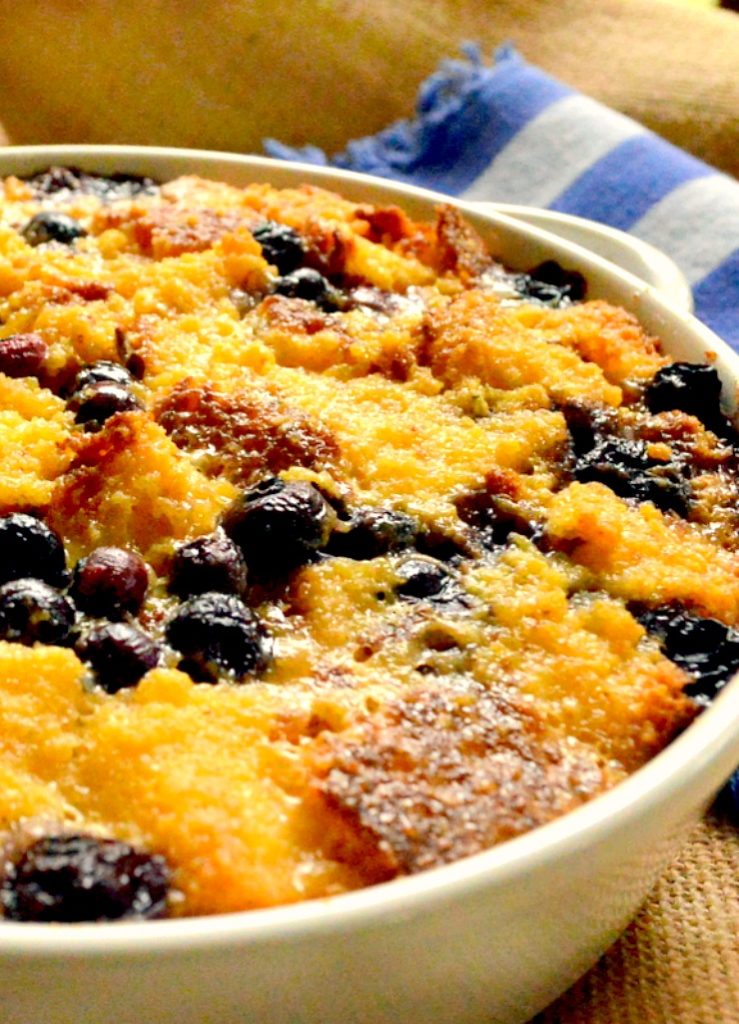 Below is an updated post from 2013. This is also where Manservant got his name!

After 18 days of non stop company, my head is full. Bursting, actually. And if you could call my daughter company, well yes it is a stretch, but when you get used to someone not being home for awhile, it gets tiring squeezing everything in.

I’d have her move back in a nanosecond. I miss her and I hate the quiet in my house. A lot. Well, most of the time. Okay… It is good to have a break.

Thinking of this made me realize that this is the first year my husband and I have been together full time, for about 6 years. Maybe more.

He travels waaaay too much. And being away for that long makes marriage tough.

It also makes it tough when you finally do get back together; which is why he is now my man servant. He named himself this. He said he is finally here to serve!

So, no, he is no longer rabbit catcher; though he was quite good at it.

He is now Manservant. I told him I could use about 10 man servants. He said he could too. Feel free to apply. 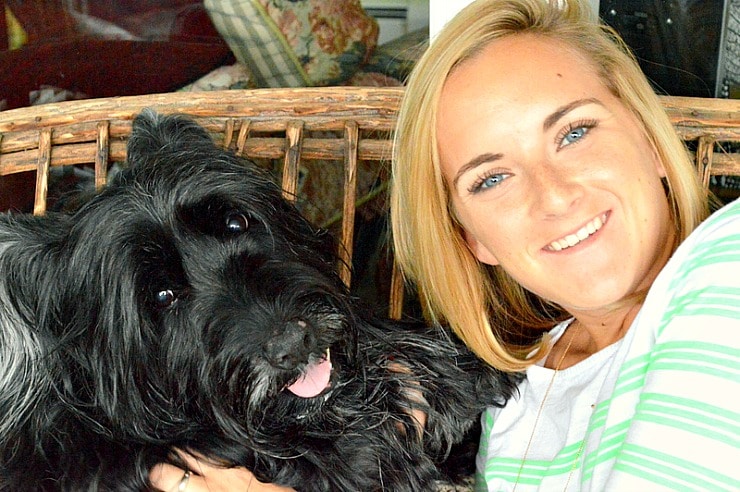 When I last wrote, I was cooking nonstop for my in laws. They left the day after Zoe got home and since Zoe was here I’ve hardly cooked at all.

No, we aren’t going out to eat much, but we had a lot of leftovers. I gave her the requisite steak dinner after she and Manservant watched CU beat CSU, which I’m told just shouldn’t have happened.

We ate lots of nachos loaded with pulled pork when family friends came over on Labor Day to happy hour with us.

Then Zoe made peach margaritas with basil that I should have snapped a picture of and also slurped my favorite shrimp ceviche. Alas, there were none left.

We celebrated the Jewish New Year with pasta and burrata.

It wasn’t planned that way, but sometimes things don’t work out the way they are planned. Rosh Hashanah was spent in the mountains at our Temple’s summer camp.

There with good friends and about 100 other people, in our jeans, outside under the trees, with the sounds of the stream rushing in the background, we prayed.

We believe we are the world’s highest active congregation at over 9,000 feet elevation. No one has heard otherwise. 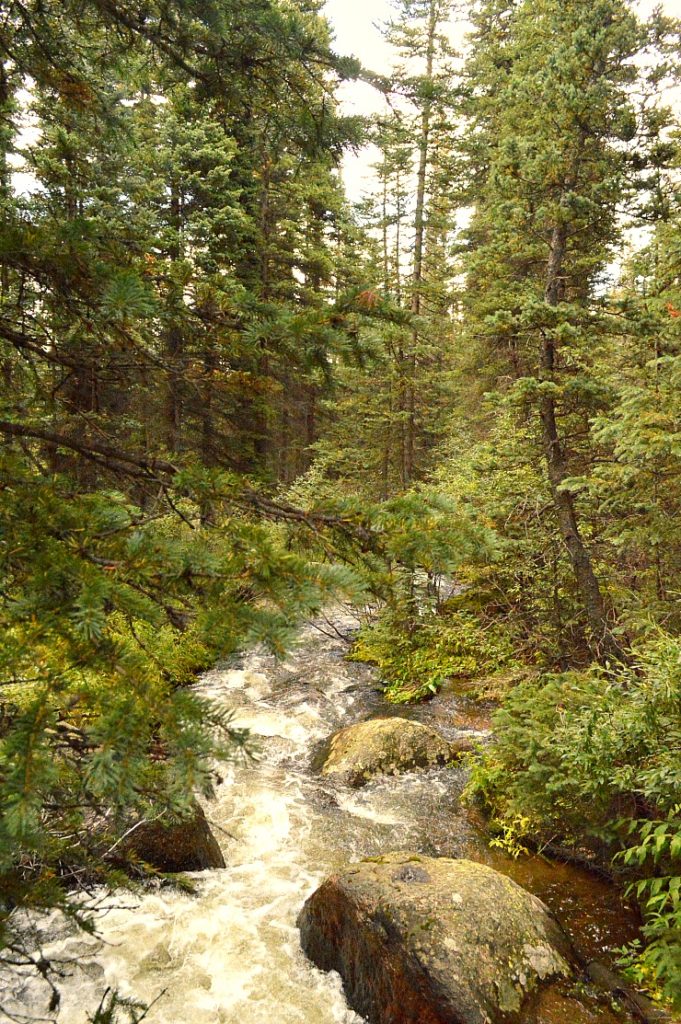 (And yes, we have heard the other joke.) Later we had roast chicken and chicken soup with to die for kreplach, at a friend’s house.

After that it was time to watch the Broncos trounce the Ravens and finish off the Momufuku Milk Bar birthday cake I made Zoe. (More on that in another post.) 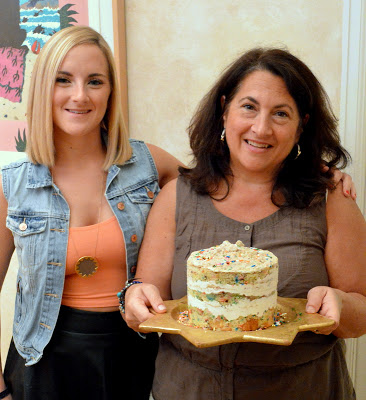 Friday we had dinner at a new restaurant, the Populist. It was fun, but all three of us were pretty tired from a full week of communing with each other and kicking off the Jewish new year.

My expectations were that I would still write while Zoe was home, but my brain was somewhere else.

Words failed me as I was nourished just spending time with her.

Now I am looking through food photos and family photos and trying to see where to begin again.

Kind of fitting since that’s what the Jewish New Year is all about. New beginnings. Wiping the slate clean. Fresh starts.

Last year was a tough one. This year will be good. I feel it deep in my bones.

These bones are so, so ready to jump for joy. I just hope my man servant can catch.

Now please make some cornbread and save some for leftovers.

This cornbread bread pudding is amazing! 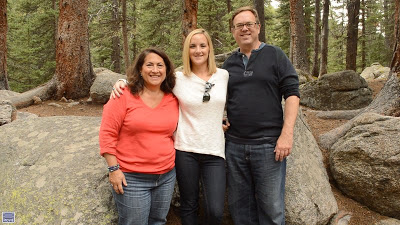 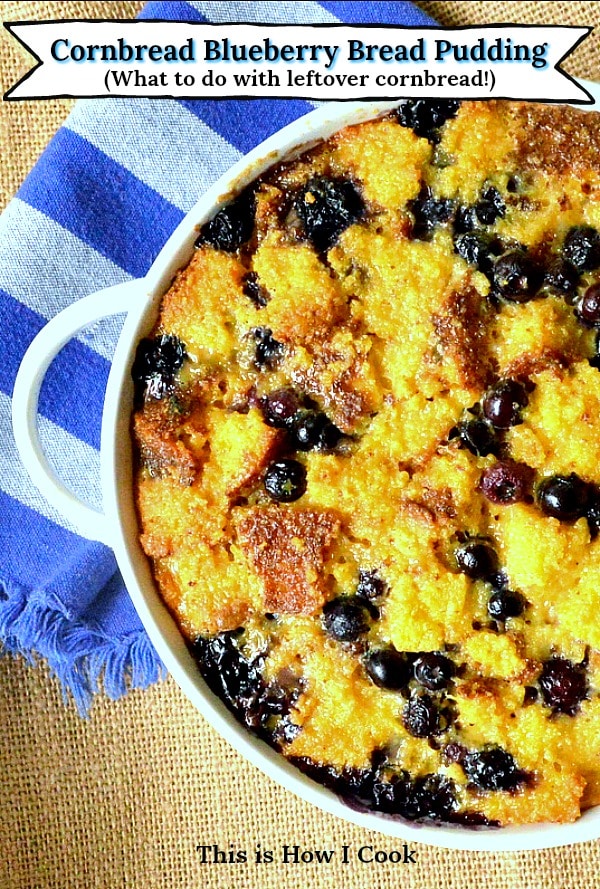 What to do with leftover cornbread? This cornbread pudding is amazing! I mean who doesn’t love cornbread?

3 c Half and Half

Combine dry ingredients in medium sized bowl. Mix wet ingredients in a large measuring cup. Make a well in the center of the dry cornbread mixture and pour in. Stir until everything is moistened and well mixed.

Spread batter into prepared pan. Bake 20-25 minutes or until top is light golden brown and a cake tester inserted comes out clean.

Butter an 8′ round souffle dish. Place corn bread cubes and blueberries in dish.

Whisk first 5 ingredients together. Pour over bread and blueberries. Sprinkle with 2 T brown sugar. You can add cinnamon, too if you like. Feel free to sub in different fruits. And don’t be afraid to add more liquid. The creamier the better. Make sure your bread is covered with liquid. Let liquid soak in about 5-10 minutes, weighted if necessary.

Bake at 300 for 60-75 minutes. Serve warm with peach sauce or  just serve alone with whipped or ice cream.

Melt butter and brown sugar in a saute pan on stove.

Stir in the Jack or leave out.

Stir in peaches and cook for a few minutes until peaches are softened enough to your liking.

Put a few spoonfuls over each serving of bread pudding and top with ice cream or whipped cream.

For bread pudding it is best if somewhat dry leftovers are used. 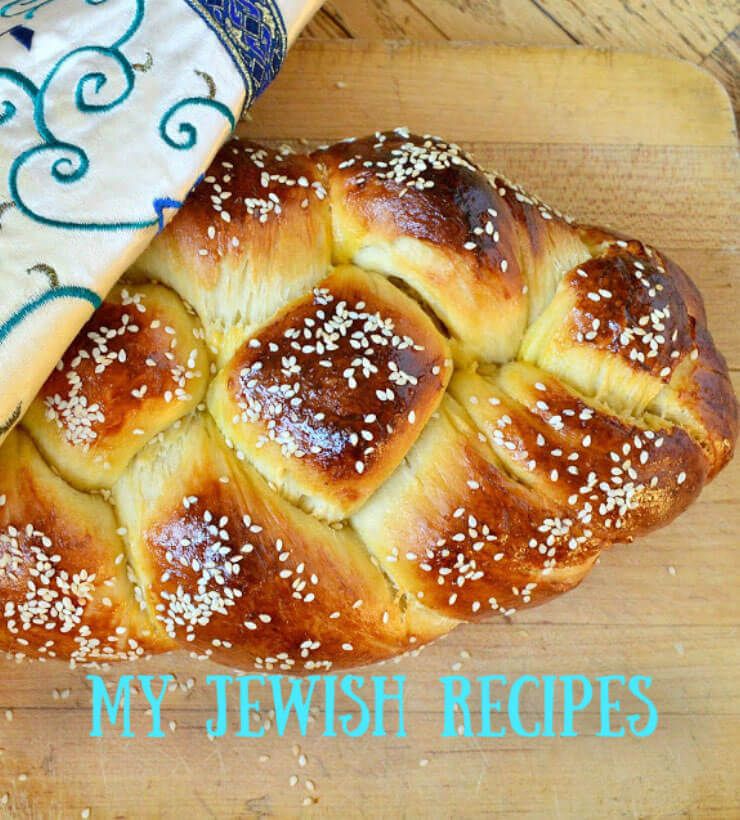 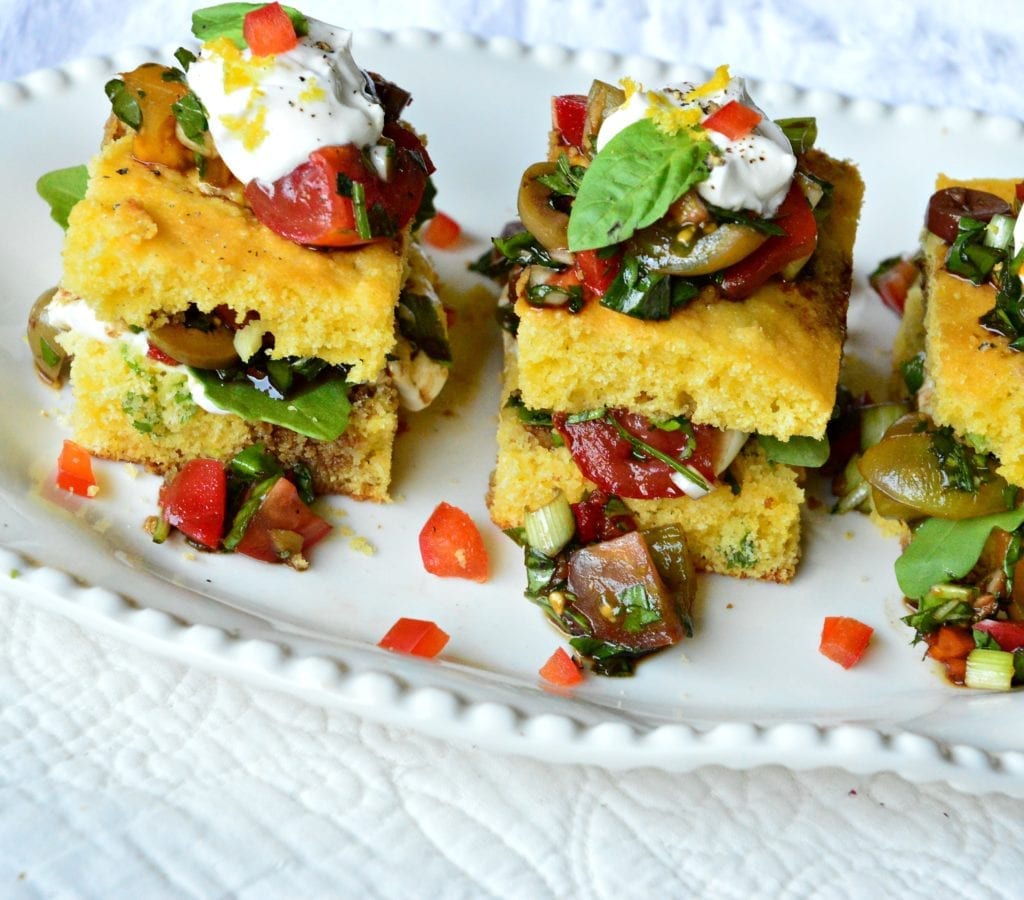 Abbe, I have leftover cornbread and a pint of blueberries in my kitchen right now!! How lucky for me :) Lovely post, my friend. I have many older ones I need to update too!

Thanks so much Tina! It is always nice to get comments like yours. Love your ideas and now that I'm looking at this, I'm thinking I should make this real soon!

This looks heavenly. My sister was just here visiting, has left, and now I, like you, have lots of leftovers, including cornbread. Soooo....your recipe fits the bill! Thanks!--Ggingerwroot.com

So happy it works, Ginger! I'm ready to make more cornbread, just so I can make this! It is good having leftovers though, isn't it?

This looks delicious, I will try it out. Thanks for the recipe.

I enjoyed looking at this very much and stand ready to serve. :) Is it too late to have a repeat of this dish?Love,M.S.P.S. You gals do look gorgeous. :)

Thanks, M.S. Glad you are getting around to noticing us!