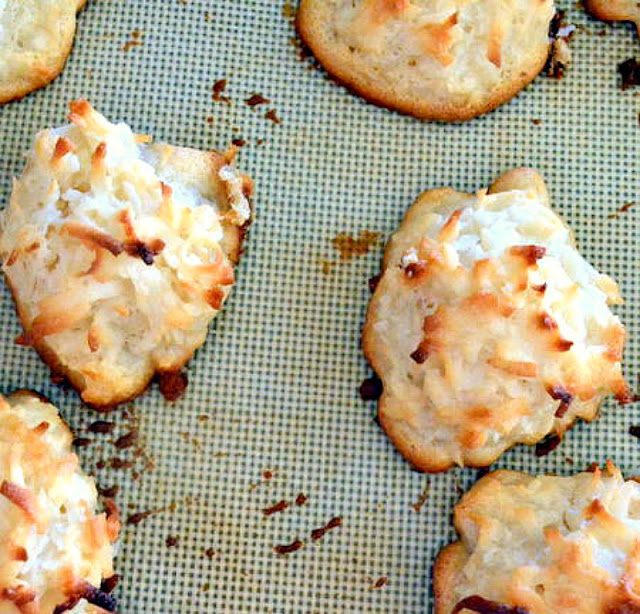 I came back with a tan-how’s that for a hot opener? It feels so good. And now it is back to the routine, as my father says. I think he lives for the sake of routine. I, on the other hand, have a hard time with that path. Not that I don’t have a routine, but mine is always ready to be broken! Phoenix was beautiful and the weather was perfecto. Passover was glorious. My kids were there and what can be more glorious than that? 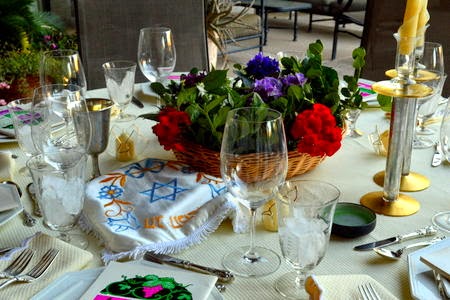 We had a great Seder with my folks and my brother and then we stayed up until midnight and watched the Lunar eclipse. The blood moon, as some call it. The moon looked like a red clay marble that glowed in the dark sky. It will happen again on the Jewish holiday of Sukkot and also next year on Passover and Sukkot again. It happened previously in 1492, 1948, and 1967. Weird, huh? And no, I don’t have photos. This is just one for the memory books. Though I will have to see if Alex got some. He set up his Go Pro on time lapse. The amazing thing was that even my parents stayed awake. Now that was one for the record books! 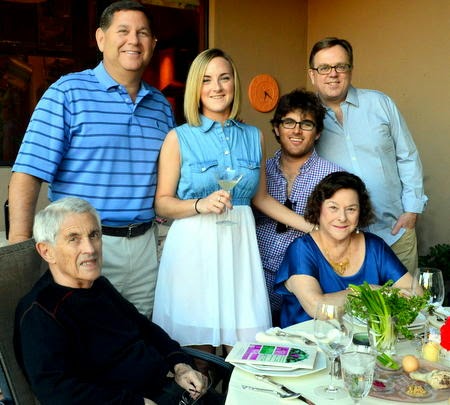 Our week continued with lots of family events and lots of eating, some spa-ing, some shopping and our second time to view the Chihuly glass at the Phoenix Botanical Gardens. We love Chihuly and though I didn’t think this exhibit was as good as the first, we still had a super time. This year there will be an exhibit in Denver and I can’t wait! 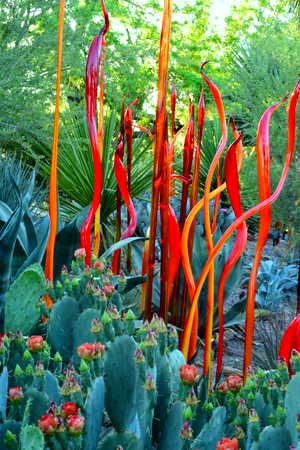 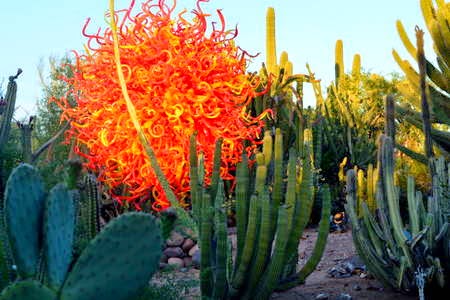 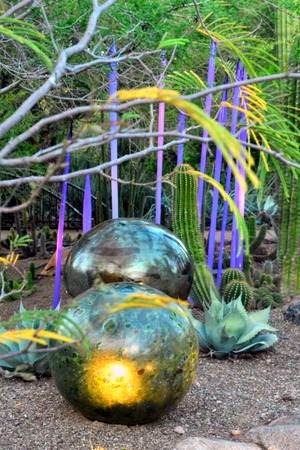 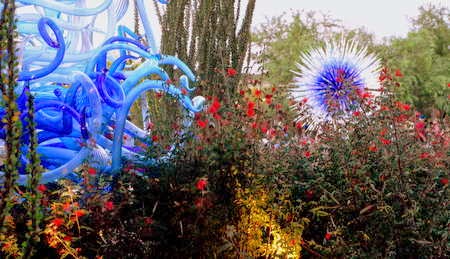 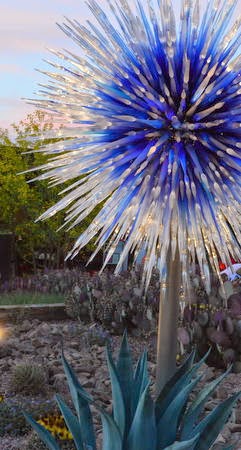 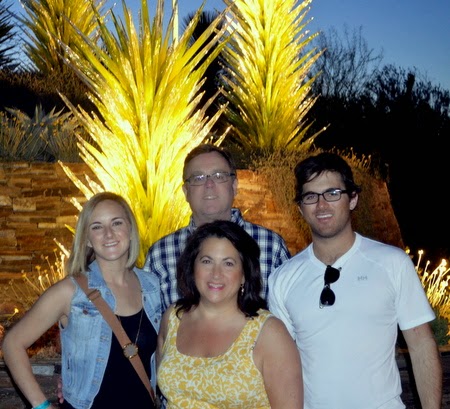 We came back to gorgeous weather in Denver and the mess of having my kitchen painted. I think it has been at least 18 years since the trim work has been done, so it was definitely time, don’t you think? I think it will be finished today, but then it will take a good day before I have it put back together. Painting is sure one way to get things cleaned up around here. And to think I really need to have the rest of the house done, too!

And I almost forgot. My brother told us good bye from this car, that is his baby. His other baby is the driver. 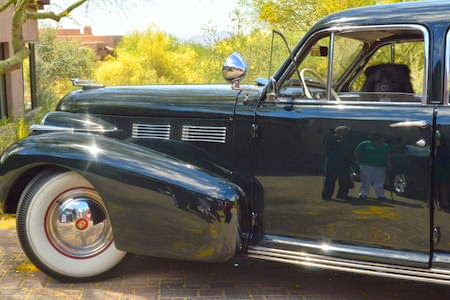 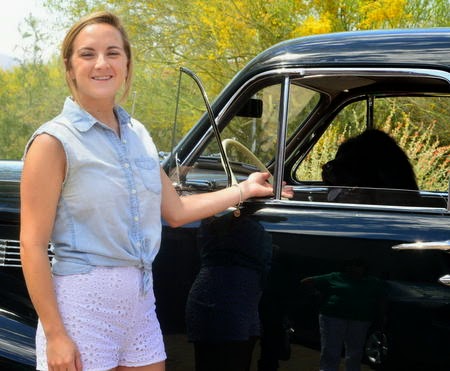 So guess what? Not much cooking going on around here, but I did make these fabulous macaroons to take to Phoenix. I found them in the little food circular, “Relish” that comes in the newspaper. Dan Cohen wrote the Macaroon Bible and this recipe came from that. The funny thing is that is is basically the same as my old macaroon recipe but the ingredients are put together differently. You will have to do a side by side comparison to see which you prefer. 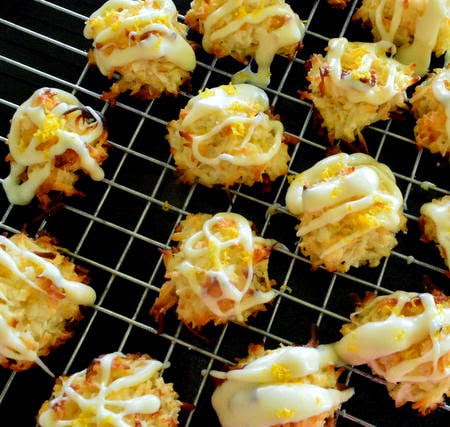 Manservant put it this way: “The original version tastes like it is chewy and full of coconut. It is dense and good. This version tastes like the coconut is more baked in and therefore it is lighter. They are both good and it is hard to choose. It just depends whether you want the more baked in, lighter tasting macaroon or the more dense, chewy macaroon. But they are both chewy in their own way.” So, there you have it! No winner-unless you consider yourself the winner, that can’t go wrong! 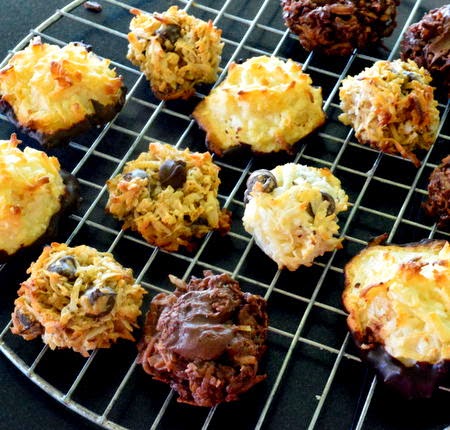 I did make a few new versions this year. They were all a hit! My lemon version was made with the zest of one lemon stirred into about 1/4 of the macaroon mixture and drizzled with a lemon juice confectioner’s sugar glaze. The mocha version was basically a heaping tablespoon of espresso stirred into 1/4 of the plain macaroon dough with added chocolate chips. I liked those! And then I took plain ones and dipped them into chocolate.  Last but not least, I added 2 T of cocoa to about 1/4 of the batter and mixed it well. I then made a little well in each cookie and dropped in a scoop of Nutella. Between all these macaroons and some matzoh toffee we were set. Truth be told they barely made it through the week! 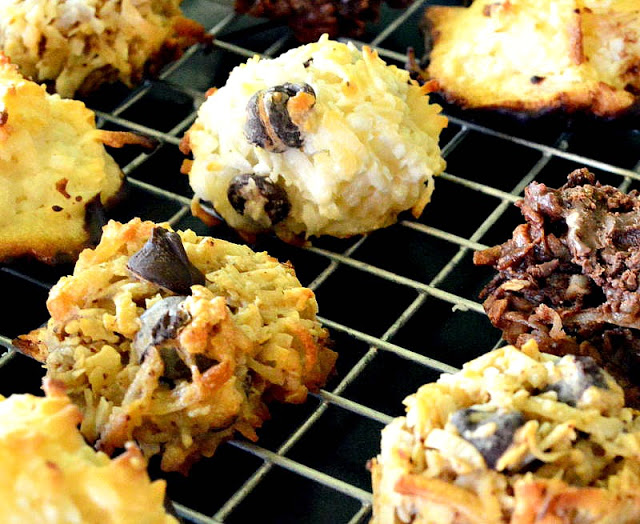 Preheat oven to 350. Line a baking sheet with parchment.
Combine condensed milk and vanilla in a large bowl. Add coconut and stir until thoroughly mixed. Beat egg whites and salt until stiff peaks form, 2-3 minutes. Gently fold egg whites into coconut mixture. I use wet hands to form mixture into small goldballs golfballs. (Don’t I wish?) Do not squeeze to hard and compact the mixture. Place on baking sheet about 1 inch apart. Bake 20-25 minutes. Let cool.

And as for those egg yolks… I put them in a little glass and add a pat of butter. Mix them well. Add some salt. Put them in a microwave for thirty second intervals, stirring in between. Take them out when cooked. Cool. And feed to your waiting and patient dog! 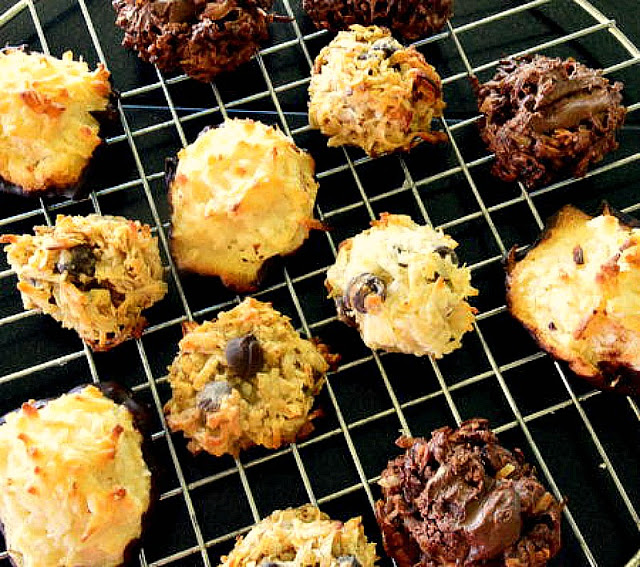 You've never had macaroons? OK. I confess. Never liked them as a kid, because I used to hare coconut. Oh, how times have changed!

And they are. Thanks, Juliana!

They are so easy to make, Sharon!

I'm glad to hear you had a nice visit with your family! Your macaroons look yummy, too - those are something you can't go wrong with!

I have been to the botanical garden and truly it is wonderful. Very sweet family photos. Thank you for sharing. I can say quite fervently that I love macaroons!Yay!!!!!!!!!!!!!!!!!

Thanks so much, Carol! I am so glad you love macaroons. Many don't!