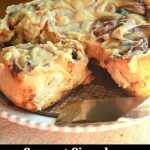 Cinnamon roll cinnabons are a copycat of the famous mall cinnabon. These decadent cinnamon rolls, cinnabon style,  are loaded with cream cheese frosting, and are decadent and addicting! 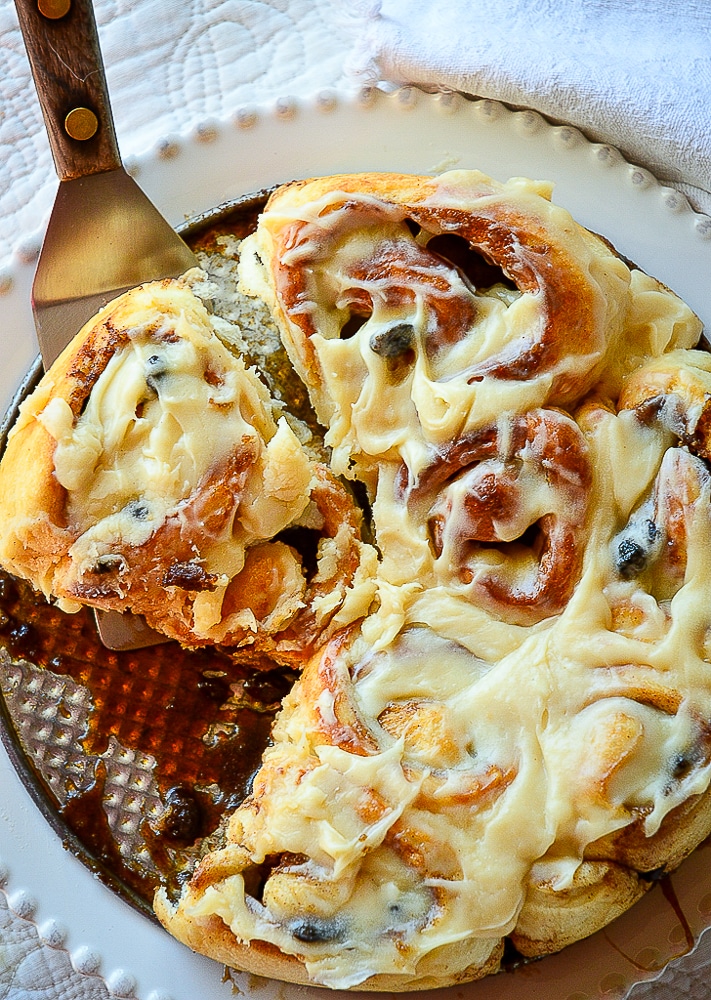 It goes without saying that the minute I discovered a cinnabon copycat recipe, I knew I had to try it.

Ever since I discovered the world famous cinnamon roll, I was smitten.

This wasn’t before 1985, because that is when the first cinnabon opened in Washington state.

I can’t tell you what year it was these appeared  in Denver, but I’m guessing it was somewhere around 1990, because that is when the Cherry Creek Mall opened and I clearly remember walking in there with a double stroller holding two brand new babies.

The  aroma of cinnamon was blindsiding and of course, there was no escaping walking by this calorie laden countertop on your way out the door. 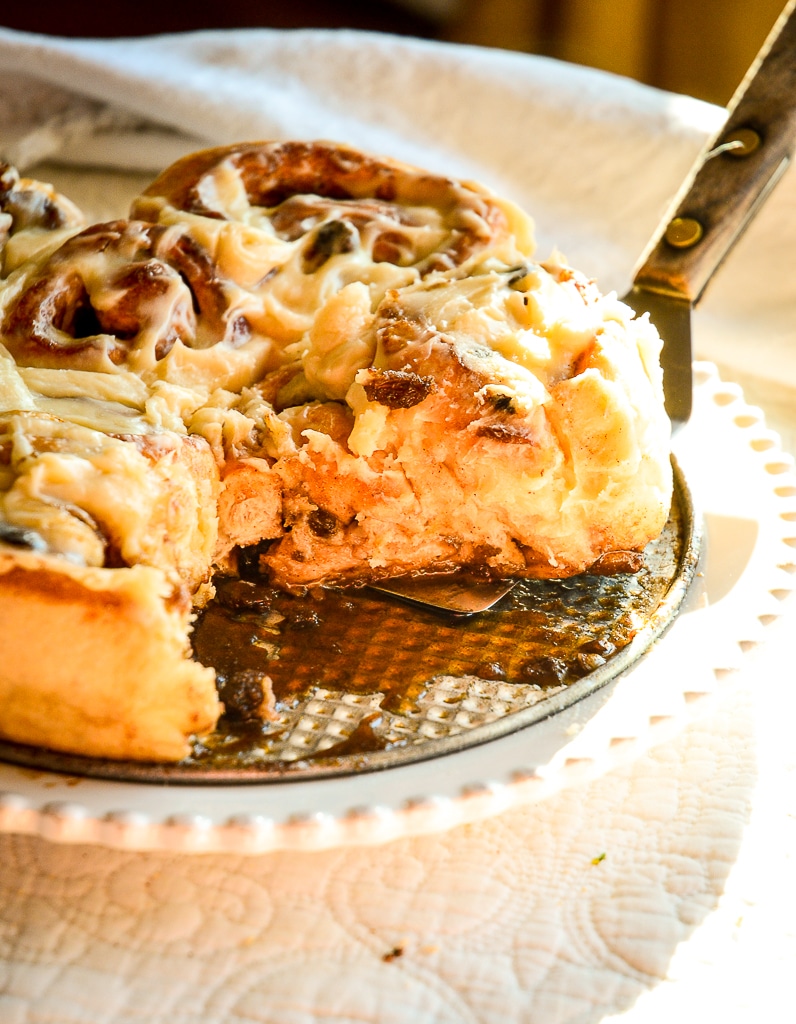 When I grew up the only kind of yeast dough in the house was from a can. You know, the rap on the counter, pop ‘n fresh kind.

Now granted, there was a lot of fun when it was your turn to rap that container against the counter. In fact, it always made my heart skip a beat when it exploded, while spilling its contents.

But somehow I remember never truly loving what came out. There was something artificial in there that just didn’t make me crave the inner goods.

And then I went to college where  many a night was spent drinking beer. The kind that ended when the bars closed, and we ended up at some little hole in the wall cafe that stayed open all night.

The kind of night that ended eating hot, huge, gooey cinnamon rolls, slathered with sweet white icing, that were easy to share between four people, but better between two. 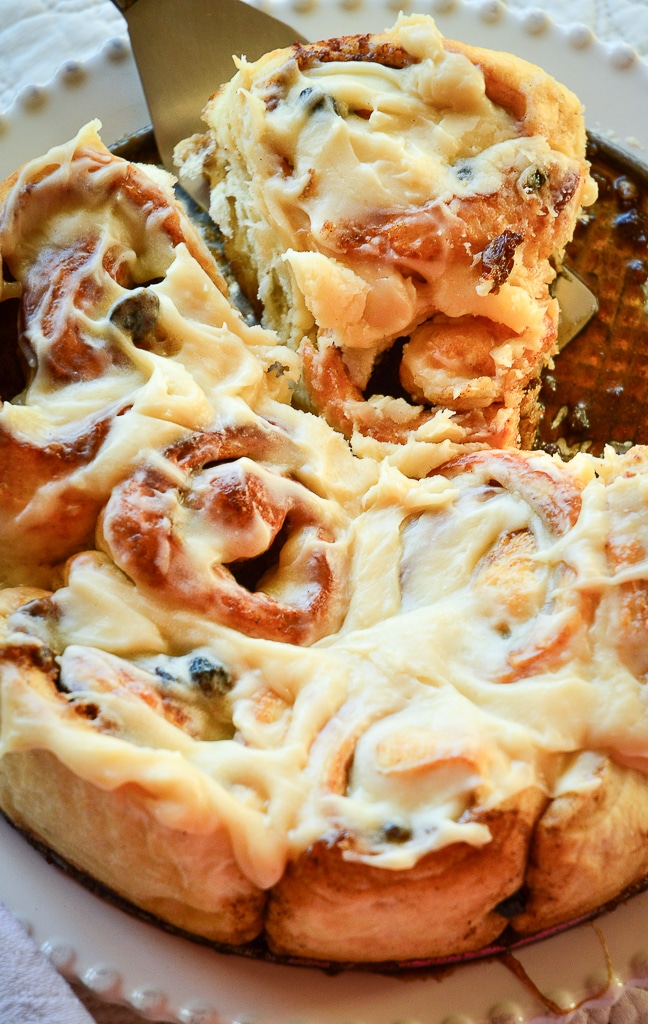 The kind of cinnamon roll that soaked up all that beer so you could easily sleep until noon the next day. Not bad for a night, not necessarily good for the freshman 15.

But that was a long time ago. And today, well, I find it’s better waking up to a cinnamon roll.

In any case, cinnamon rolls are a good way to make people happy. After all, who needs beer when you can eat a cinnamon roll? Well, I guess one could argue that.

But the cinnamon roll I’m talking about are those that can be made for brunch;  you know the family kind.

The kind where everyone loves waking up (even with a hangover) just because the house smells so good. 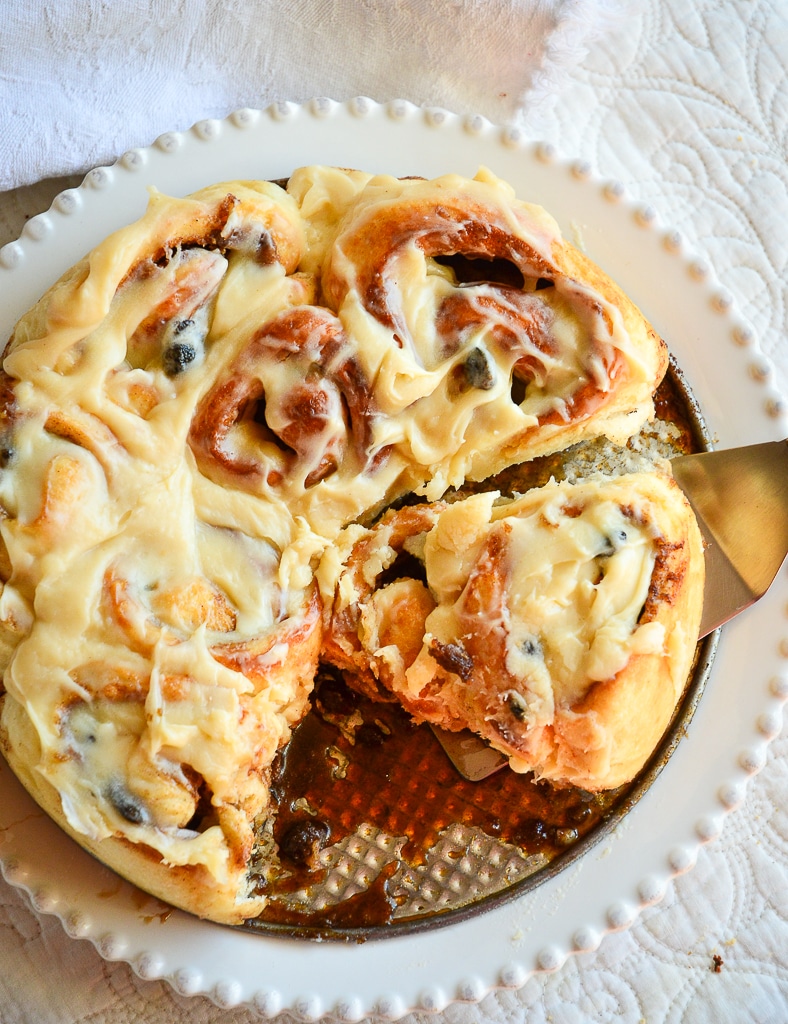 This cinnabon copycat recipe roll is made from Rhodes frozen bread dough.

This cinnabon copycat recipe does not require spending hours in the kitchen.

In fact the hardest thing about making this cinnabon copycat recipe is  remembering to thaw the damn dough. (Just write yourself a little sticky note and stick it to the freezer. THAW DOUGH! )

Stick each loaf in a little mini bread tin that has been sprayed with cooking spray. Cover and let it thaw overnight in the fridge.

This qualify as homemade cinnamon rolls in my book and they are great to have on hand for those after prom mornings, graduation brunches, mother’s day, father’s day kind of events. 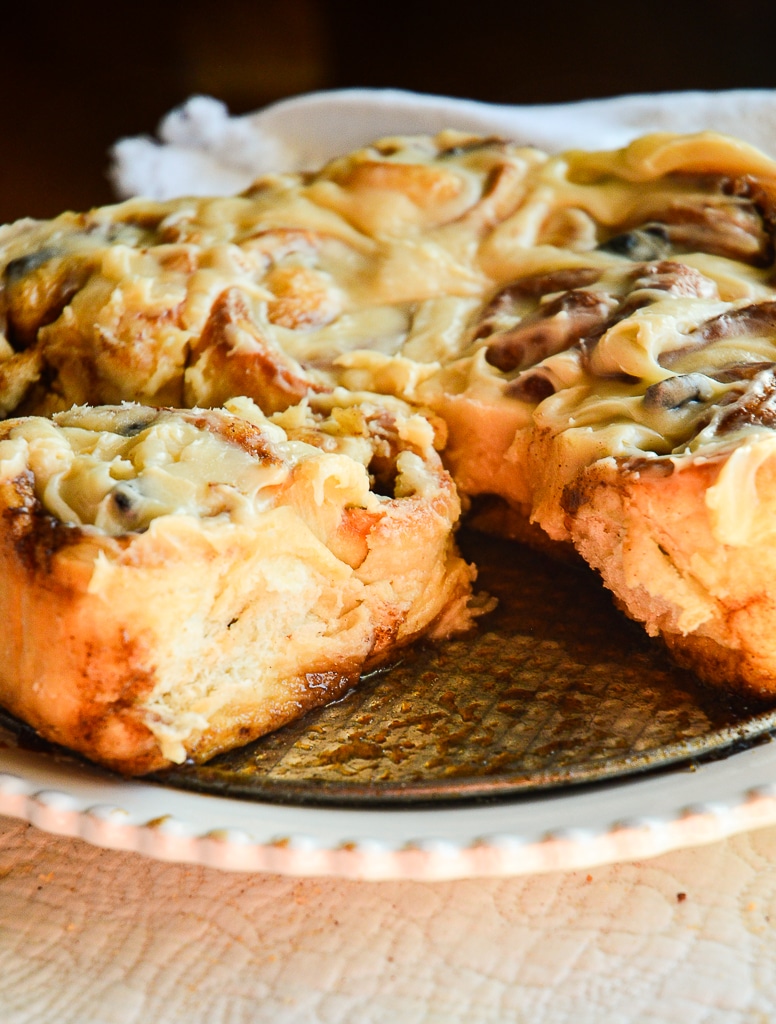 These are also great for gifts. Teachers especially appreciate them for teacher appreciation week. (They still do that, don’t they?) People will be amazed at what came out of your oven.

I’ve rolled these up with chocolate chips , pumpkin filling and even nutella.

But my favorite version is still the classic topped with the best icing for cinnamon rolls, ever!

Thanksgiving is the time I often make these. The kids are home and everyone is thrilled to be greeted with warm cinnamon rolls, straight out of the oven.

I know three pans of rolls sound like a lot, but these  are easily kept in the freezer and thawed when needed. And like I said they do make great gifts for good friends and neighbors! 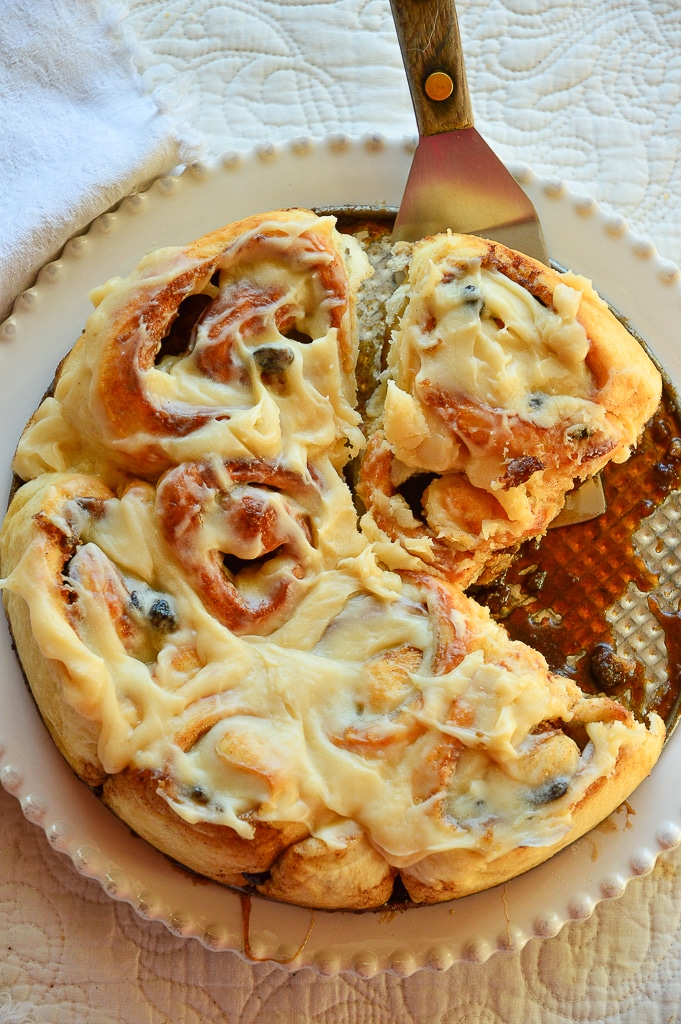 What kind of cinnamon should be used in cinnamon rolls?

One thing that distinguishes Cinnabon cinnamon rolls from others, besides they luscious cream cheese icing is the cinnamon used in the roll.

Apparently Cinnabon has their own trade marked cinnamon, a version from Indonesia called Korintje.

I have never tried this but it is available on Amazon.

I use Saigon cinnamon that I find at the local spice store. It is pretty awesome, too. 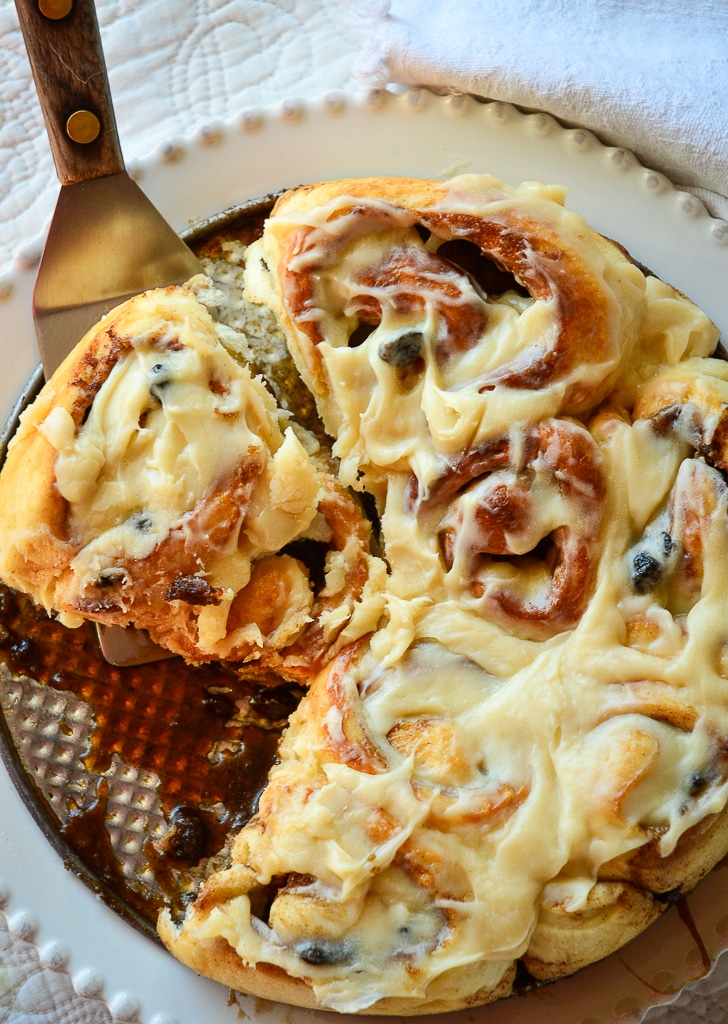 Be aware, there are differences in cinnamon. I am now a convert to Saigon cinnamon that I buy at the Savory Spice Shop  in Denver. I am told  it is their best selling spice. Taste it and you will see why.

Each is from a different variety of the cinnamon tree but the Saigon cinnamon is said to have the stronger flavor because of its higher oil content Just might have to do a taste test with these!

This cinnabon copycat recipe tastes about as close in flavor as those at the mall.

What kind of frosting is used on a cinnabon?

If you are a lover of cream cheese frosting, then you will love what is plopped on top of these copycat cinnamon rolls. 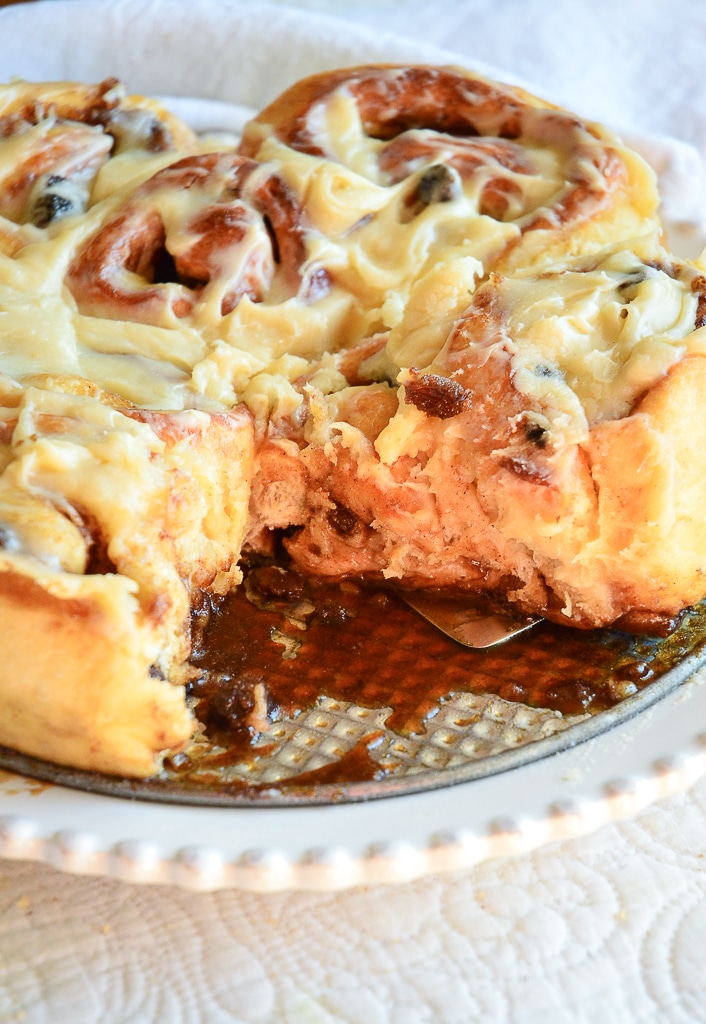 Just be sure to spread this on while the rolls are still warm to get the gooey-est results!

My family loves these easy cinnamon rolls, and I admit I do too. Whip these up and surprise someone this weekend.

Make their day. Well, go ahead. Make yours, too. Just remember to thaw the damn dough. 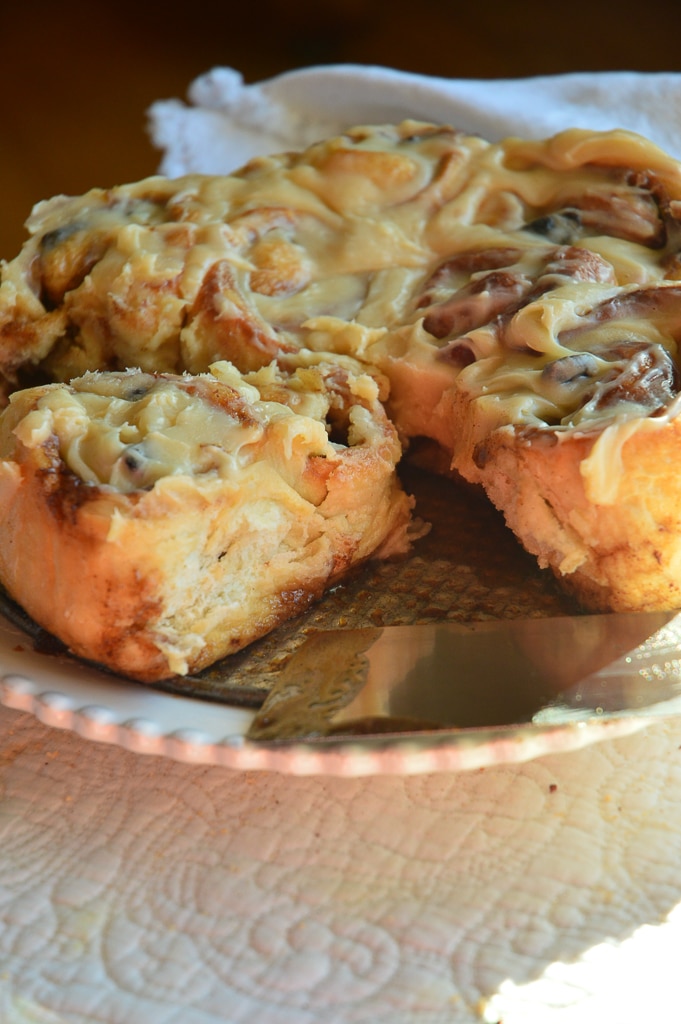 A Few More To Try: 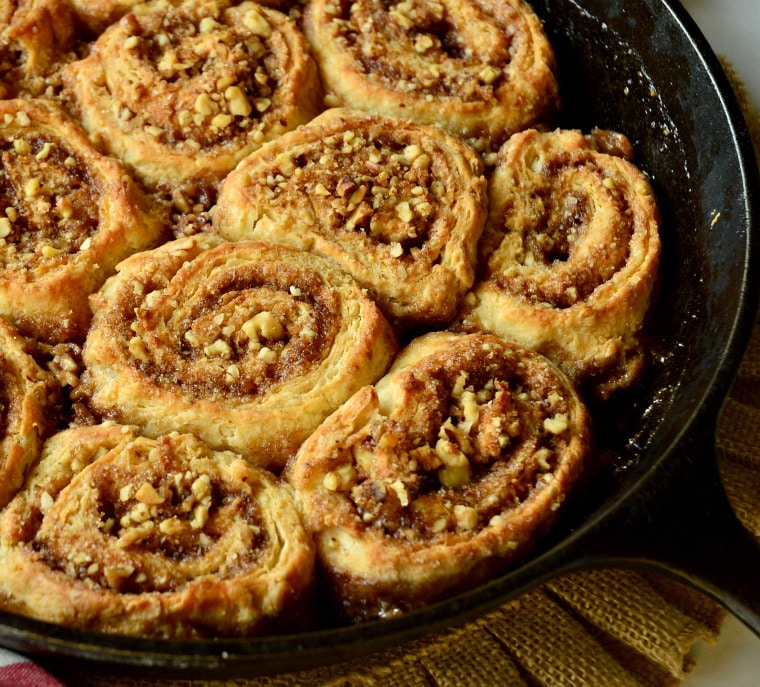 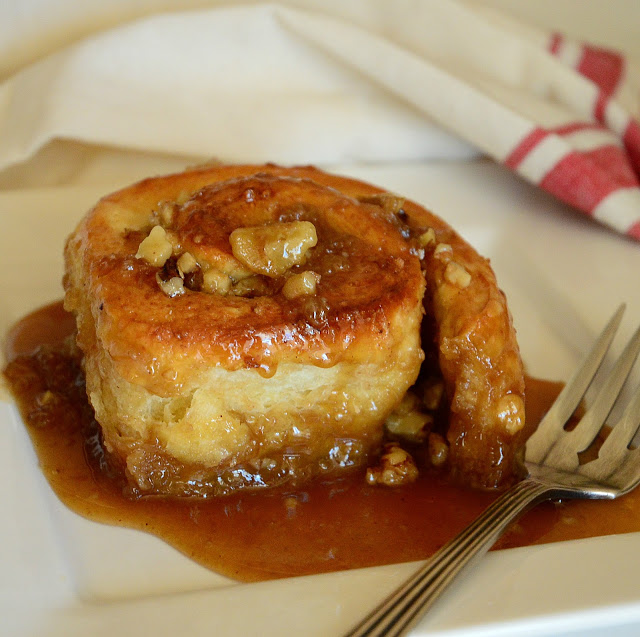 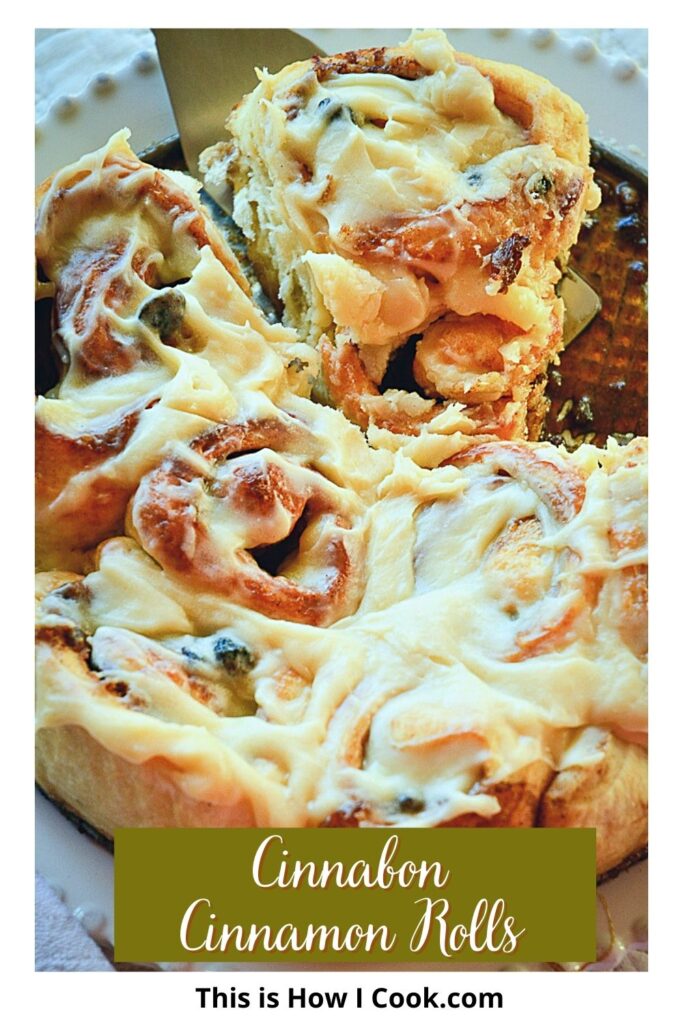 As an Amazon associate, I earn from qualifying purchases and may receive a very small commission at no cost to you. Please see my disclosure policy for more info.

Cinnamon roll cinnabons are the copycat of the famous mall cinnabon. These decadent cinnamon rolls, cinnabon style with lots of  cream cheese frosting are decadent and addicting!

3 loaves frozen bread dough (I use Rhodes and thaw it overnight in the fridge.)

Mix sugar and cinnamon together.

Using one loaf of dough at a time, roll on floured counter to a rectangle of 15 x 7 inches. Spread liberally with melted butter. Sprinkle with 1/3 of cinnamon mixture. (If you want to add raisins, nuts, chocolate or even pumpkin pie filling, you can do that now, too.)

Starting at the long edge, roll up like a jelly roll. Cut this long roll in half. Then cut each half in half. Then cut those halves in half. The idea is that you should have 8 fairly equal cinnamon rolls. Now take those slices and place them in a circle in an 8 or 9 inch  greased cake pan. (Do this 2 more times).

(If you want them to rise overnight cover them with plastic wrap and let them rise in refrigerator. Take them out 1/2 hour before you want to bake them so they will come to room temperature.) If you are baking right away they do need to rise for about an hour in a warm place.

Then brush with any extra melted butter you may have and bake them at 400 degrees for about 15 minutes or until they are pretty and gold.

While they are baking prepare your icing.

Mix icing ingredients in food processor or mixer until fluffy and light. Spread icing on rolls while they are still warm. These may be frozen after icing. Just thaw and heat gently in the microwave to warm a bit.

Best eaten while warm with or without a beer.

Feel free to design your own filling. Add raisins, nuts, other dried fruit and even chocolate chips!

I have not made cinnamon rolls in years. Bill loves them so this is a perfect birthday treat for him this week!! He's going to be thrilled.

I love it when the hardest part of the recipe is remembering to thaw the dough :) The only fault I can find about these rolls is I would want to make them ALL the time!

Cinnamon buns are for sure a crowd pleaser! I love all sorts of variations. This looks incredible with that cheese frosting!

So are you going to make me cinnamon rolls the next time I come home after drinking? Is this what you are saying? I love you and I miss these!

That is a great idea! And for all the things I know I'll forget! Thanks!