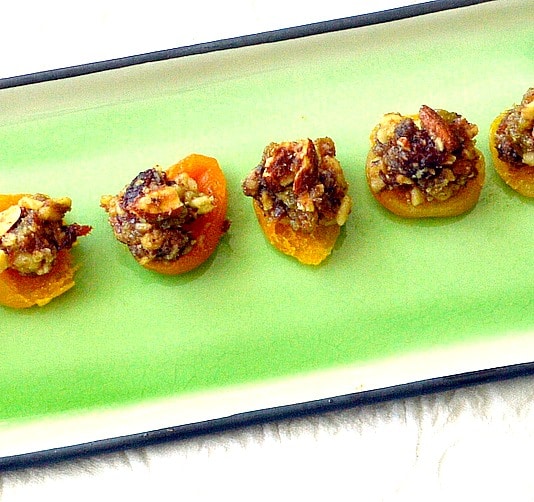 This week in blogosphere I am seeing a lot of eggs, bunnies and chicks all done in pretty pastel colors. I am also seeing lots of chocolate decorated with my favorite malted milk ball eggs that also come in those pretty pastel hues. I am sorry. Charoset does not look like this. But I can tell you it is most likely much healthier than those malted milk balls that I keep passing up in the candy aisle at the grocery.  It is good and definitely worth trying.

Let’s face it. It is hard to make what is supposed to represent mortar very pretty. Now maybe if the Pharoahs had the good sense to do mosaics on the pyramids we could have come up with something a bit more colorful, but giant boulders were more to the Pharoah’s liking. Yes, it is Seder week! And Jewish comfort  foods are traditional. Just like ham and eggs we eat chopped liver and charoses every year. And we look forward to it.

Each year our Seder plate has foods that are symbolic of the season. We have matzoh (the bread of poverty) because when you’re told to get the hell out of dodge you don’t wait for your bread to rise. And we eat horseradish to remind us how bitter our lives were under the Egyptians. We eat charoset to remind us of the mortar that was used to build the pyramids. We eat  hard boiled eggs to remind us of the sacrifice that Jews brought to the ancient temple and also are a symbol for life. A green vegetable such as parsley  reminds us of Spring and that Spring  is a time of renewal. We eat chopped liver just because. Yeah, just because it’s so frickin’ good, and everyone knows that things that are good, aren’t really good for you. Except for chicken soup with matzoh balls.That really is good for you, and we eat that, too!

We eat a lot at Passover, plus we get to drink four full glasses of wine. Try doing the dishes after that! And we sing songs like “Frogs in your bed and frogs in your head.” And it is fun. Even when your entire family isn’t there to share. It’s a good holiday and the kids even get to search for the hidden matzoh or afikomen. Which of course isn’t as pretty as an Easter egg but they do get money for finding it! How much? Well, it all depends on the host and this year’s recipient seemed to do very well with lots of $2 bills. He was definitely happy! 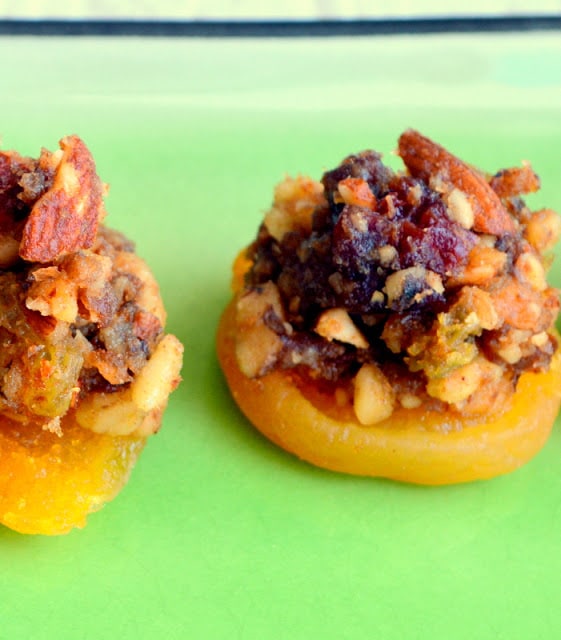 And so it is that I make charoset. This year I made it, just because it is good; and I wanted leftovers to eat for about a week. Charoset is kind of like cranberries at Thanksgiving, in the sense that I always wonder why I only tend to eat cranberries a few times a year. Maybe that’s why they taste so good. Well, charoset is like that. You always ask yourself why do I only make this for Passover? Charoset comes in basically two flavors. The Ashkenazic type and the Sephardic type. Huh? Well the Askenazics were Northern European Jews so their recipe contains apples; whereas the Jews who lived in the Mediterranean regions and further South were not likely to find apples so their charoset is made with things like apricots and dates and figs. Both are ambrosial.

Today’s recipe is Sephardic. It tends to taste richer to me than the type made with apples, walnuts, and cinnamon. I usually add raisins when I make it. But that’s not what is on today’s table. Today we are going to fill our tummies with apricots and almonds and dates. And you are going to need a food processor. We are not like the slaves of old. We like our food processors, especially at Passover! And as a side note…I think this would be great as an appetizer with a dollop of goat’s cheese while sitting on the deck at sunset with a crisp glass of Chardonnay or even Champagne! (Wishful thinking never hurts anyone.) Additionally, you can substitute whatever dried nuts or fruits you prefer. Next time I want to try pistachios! 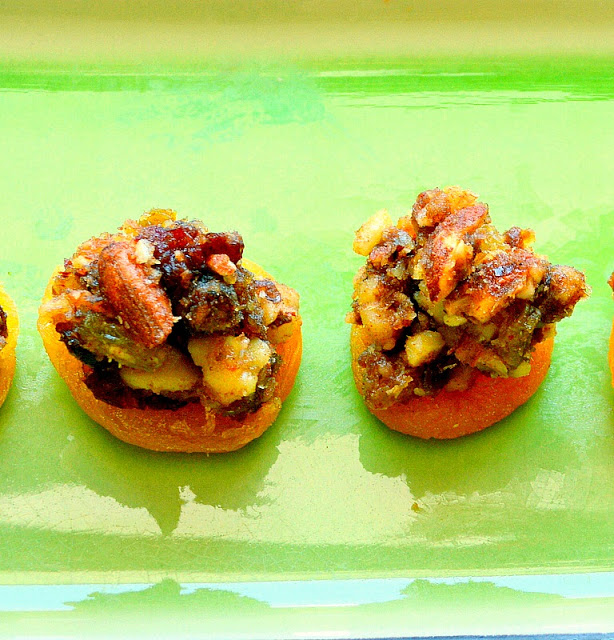 Sephardic Charoset with Dried Cherries
(Adapted from Food and Wine/2000)
Makes about 30.

Directions:
Preheat oven to 350 degrees. Toast walnuts for about 10 minutes and almonds about 6 minutes. They should both be light gold in color.

In a bowl combine raisins, dates and cherries with wine or juice, lemon juice and cinnamon for at least 15 minutes. Process fruit and nuts in food processor until a coarse paste is formed. Transfer to a bowl and refrigerate up to 5 hours or longer. (This keeps well.)

Form heaping teaspoonfuls of the fruit and place one on each apricot half. Garnish with some sliced almonds or goat’s cheese. (If you’d like, you can just serve this with some diced apricots mixed into the mixture. In this case I would definitely serve it with crackers or matzoh.)

Now take a bite and be thankful you are not a slave in Egypt! 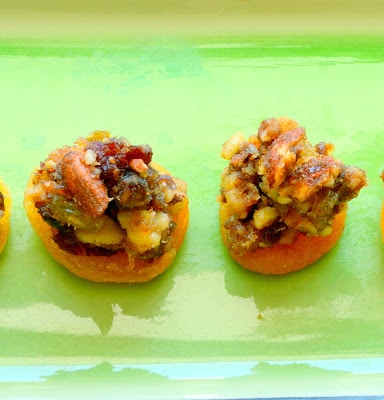 These look amazing especially with the dried cherries. My sephardic mother in law makes a charoset with soaked dates, raisins, and walnuts that looks like mortor

I have never heard of charoses before but I know I would love them. I am a fan of anything with dried fruit and nuts.

Thanks Uru. And thanks for stopping over. It is delicious! And Mr. TC-good idea.

I enjoyed this very much with hot oatmeal and plain greek yogurt... that should be your recommended serving. :)