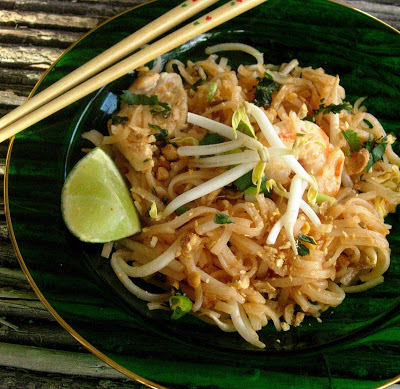 I can always eat Thai food. Spicy, sour, sweet. So last week when I was invited by a close friend to a 5 course wine and food Thai dinner given by students at University of Denver, well, you can imagine that I jumped at the chance to go. The dinner was part of a course they were taking where each student has the opportunity to design a meal and work with a guest chef. In this case the Chef, Saipin Chutima, who owns a well known Thai restaurant in Las Vegas, flew in to work with the students. She helped the students dish out everything from soup to salad to noodles to dessert. Many of my favorites were served and it was fun to see their “take” on them. A lot of Rieslings were served which generally are not something I tend to drink, however, I must say that the sweetness of the wine worked well with the sour in a lot of the dishes. Kudos to the students. They really seemed to enjoy what they were doing and we all enjoyed watching them. I suppose they could be our future restaurant stars in which case I would say they are off to a great start. More dinners are upcoming. If you are interested you should check out the DU website.

Which leads me to Pad Thai. I love Pad Thai when it is made fresh. The students made drunken noodles which I also love, but they left out one of Thailand’s national dishes which is Pad Thai.  There is a lot of BAD Pad Thai out there, floating in the universe. So let’s make some good Pad Thai, shall we? Have you ever had Pad Thai in a Chinese restaurant? Generally, it is no good. The chief reason being that Thai food is not Chinese and most Chinese chefs are only good at- you guessed it-Chinese. The other thing that makes for a bad Pad Thai is bad noodles. Have you ever had noodles where they are soft and gooey and starchy and stuck together? Yeah. Bad noodles. Or you could go the other route where they didn’t soak the noodles enough and then you have hard to chew noodles. Yeah. Bad noodles. Of course this can also happen when the restaurant makes the dish ahead of time and lets it sit around so when it is served it tastes soft and bland and just generally lifeless.

Pad Thai is never good when ordered for take out in my humble opinion. It has too much time to steam and take on those lifeless, limp noodle, characteristics. So if I can’t get out to my favorite Pad Thai restaurant, which is Wild Ginger on Littleton Blvd, then I resort to making my own. This is  my invention using a combo of all the Pad Thai recipes that are out there and it is pretty good. In my case I had no one to share it with, so I have leftovers. In most cases I love having leftovers, but Pad Thai is just not good reheated. Trust me, I will power through them, but Pad Thai is best eaten fresh.

Key tips: Soak your noodles as the package directs. Make sure though that they are soaked enough. There is a fine balance between soft and hard. Just don’t forget that. Avoid BAD noodles!
Tip#2: The sauce is also important. You can make it more sour, more spicy, or more sweet. It is your choice. I figure about 1 T of sauce to 1 oz of noodles. To much and you get a gloppy, yes gloppy, (it’s a combo of sloppy and gooey in a negative sense) dish. The noodles should only be lightly coated.
And tip #3. Always go to a DU dinner if you are invited. They are worth it!
Pad Thai
1 chicken breast sliced thin
5-8 large shrimp peeled
2 large garlic cloves
3T canola oil
2 lightly beaten eggs
8oz flat wide rice noodles soaked
1/2c Green onions or Garlic chives
1 1/2c bean sprouts
Garnish with chopped peanuts, chopped cilantro, green onions or chives and a lime wedge.
Heat oil and garlic in large skillet or wok over medium high heat. Add chicken and shrimp and cook until done. Do not overcook! Remove from pan. Add eggs and stirring lightly, scramble them softly. Add noodles and sauce and stir until combined Add back shrimp and chicken and then bean sprouts and green onions. Serve using all your garnishes.
Pad Thai Sauce
4T ketchup
4T fish sauce (you can find this at most groceries)
1t sriracha (chili sauce)
4t sugar
2T lime juice
Mix together and use about 1 T sauce to 1 oz noodles. Rice noodles come in a bunch of different weights so it depends on your package how much you want to use.
Once you make it you may never order it in a restaurant again! 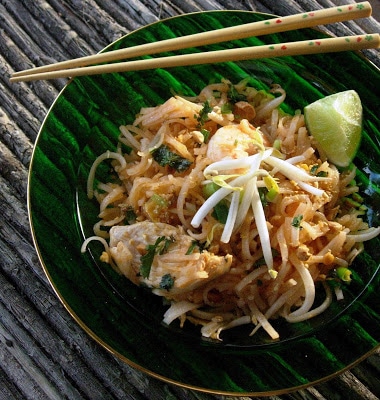 You are so welcome. Sometimes cooking other ethnic foods requires new foods in our pantry. It is not always easy to remember ahead if you need things like fish sauce. Though it does last forever! But try it!

It's funny, but I rarely cook Thai food - or even eat it! Which is so weird, because I love it. But I love so many others things, too, and I'm spoiled by having way too many choices. Anyway, your Pad Thai looks great - simple, clean flavors, just the way I like it. But your sauce has a little kick - also just the way I like it! Thanks for this.

Pad Thai is one of those dishes that when it's bad it is usually very bad! Try this and see what you think. Thanks for the nice words, Johanna!

I love Thai too! I usually make the green curries but I must try this one. I know Pad Thai is very popular. I to had it at a Thai restaurant a long time ago (and it wasn't very good) must be why I haven't chosen it again. Thankyou for the lovely post Abbe! Cheers, Johanna.