Ilse’s Passover mocha nut cake isn’t just for Passover. Alex and Zoe often requested it for their birthdays.  Try this delicious walnut cake with the best, to die for, mocha frosting ever! 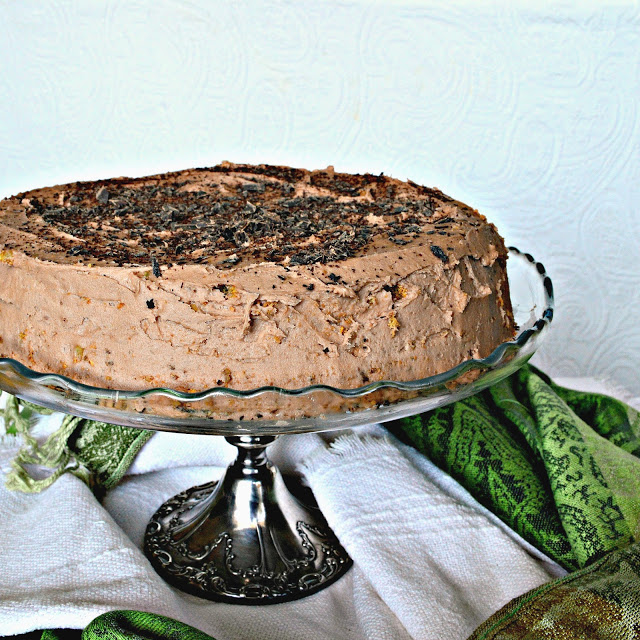 Passover cakes are traditionally sponge or meringue cakes and are always made without leavening. Passover cakes are made without leavening because when the Jews were slaves in Egypt they didn’t have time to wait for their bread to rise. After all when the Pharaoh says go, it’s time to get the hell out of dodge. Hence we eat matzo, which is made from flour, but has no leavening. Matzo meal is substituted for flour and matzo cake meal is the same thing but ground finer.

Passover nut cake is traditionally served for Passover as this cake is made with matzo meal. It also is primarily made with ground or finely chopped walnuts, and eggs and egg whites are used to make this cake rise. We love the nutty taste of this cake but it’s the mocha frosting that sends this cake over the moon and back. Alex and Zoe often requested it for their birthday cake so there is no reason to save this for just Passover.

I’m not sure how my Papa Alex fell in love with our beloved Ilse, but I believe it had something to do with her cooking. I was young when my Bubbe died and I know my Papa was very sad. However it wasn’t too long until he found Ilse and we all discovered that the way to a man and a family’s heart is through their stomachs. Ilse was a tremendous comfort to Papa, which made me comfortable too- because if Papa was happy, well, I for one, was happy, too. 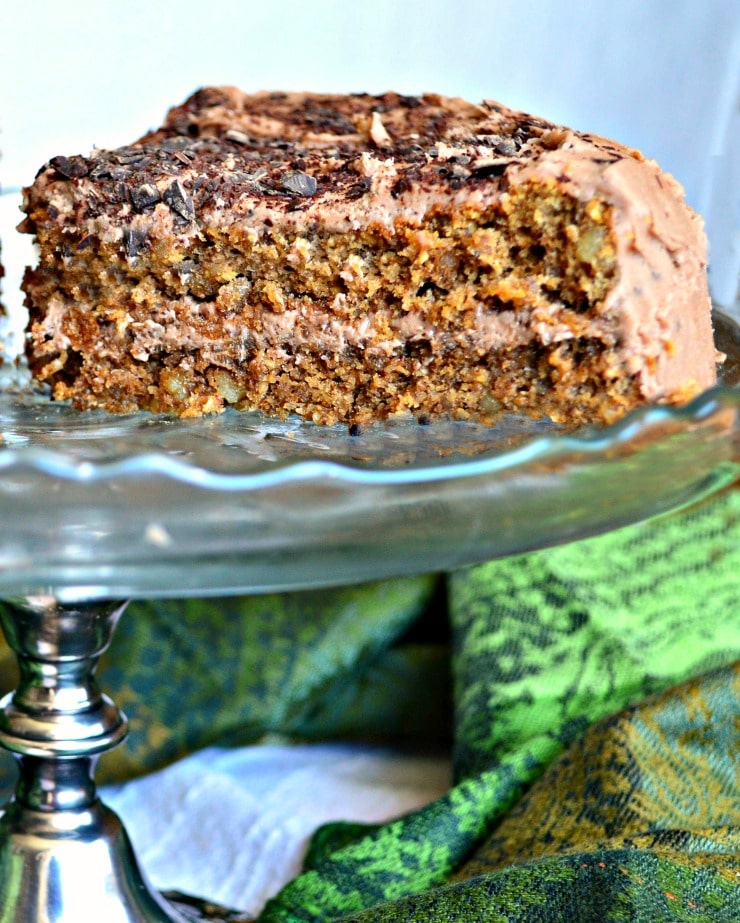 I can only guess what she cooked up on their first date but my imagination leads me to believe that it may have been this cake. It is a special cake not only because it contains love in the purest form, but also because I have never found any like it. So don’t lose this recipe! I guarantee you won’t be able to replicate it.

Many years later when I was older I asked Ilse how long she had been making this. As you will see the secret ingredient in the frosting is hot cocoa mix. I had no idea they made hot cocoa mix in the 40’s but she informed me they did. Now something else you must realize-this was before food processors were standard fare in the kitchen, so all those nuts had to be chopped very finely by hand. Egg whites were mixed with a hand beater. Quite a job and more than I would want to do, but Ilse did it and not just for Passover. (Yes, this is a Passover cake, because it contains no leavening or flour.) She made it often. 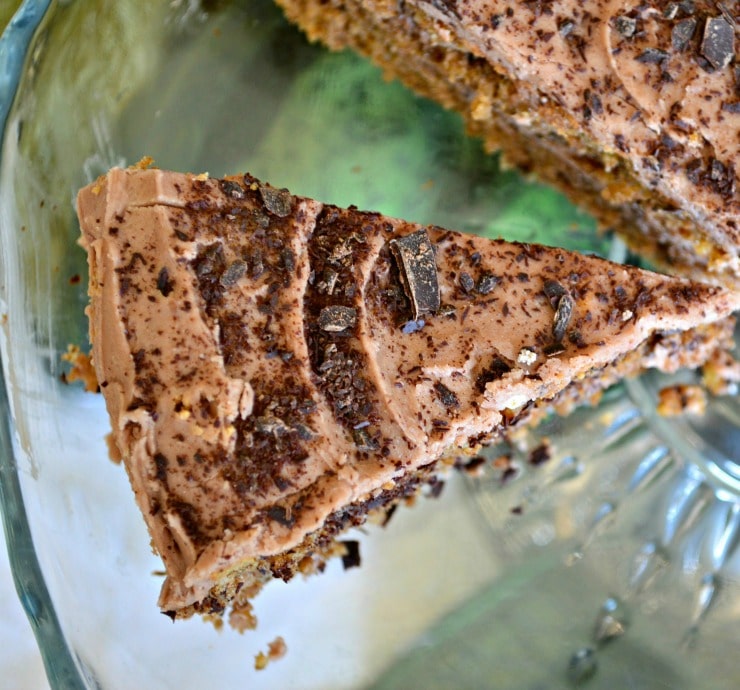 Now, let me digress and admit something here. When I was younger, I did not like this cake, but I loved the frosting. I remember trying to eat around the cake and make it look like I really liked it. But all that does not matter now. One of the first things I wanted when I got married was this recipe. It is true that absence makes the heart grow fonder. However it then took me almost 20 years to get the recipe out of Ilse’s mouth! It was over the phone and well, you can see exactly what I wrote. Now it’s in recipe form so that it can be enjoyed by all. 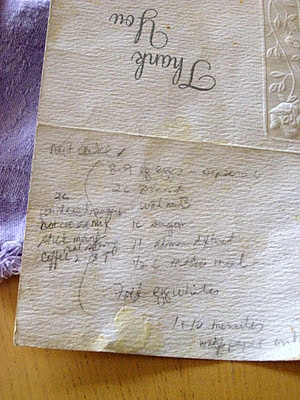 One last note. My kids LOVE this cake. I have twins so I bake two cakes each year. We always do chocolate and we always do Ilse’s cake. And when they came home this year for winter break, it was Ilse’s cake that was waiting for them. It’s only fitting that in the month of December when Ilse would have been 91, that we use this cake to celebrate her. It is comforting to know that my kids will be celebrating with this cake for many years to come. And in doing that Ilse will always be in our hearts and our thoughts. And dare I say- our tummies?  I do believe that would make her very happy.

OK. One more note. Ilse saved the teacup in the photo to give to me at my bridal shower. It was part of my Bubbe’s china set and has a very special place in my heart. 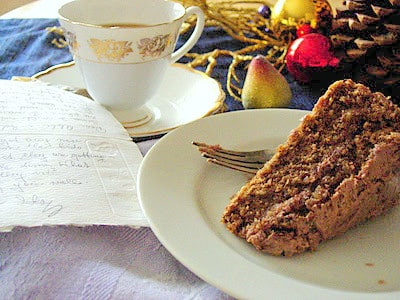 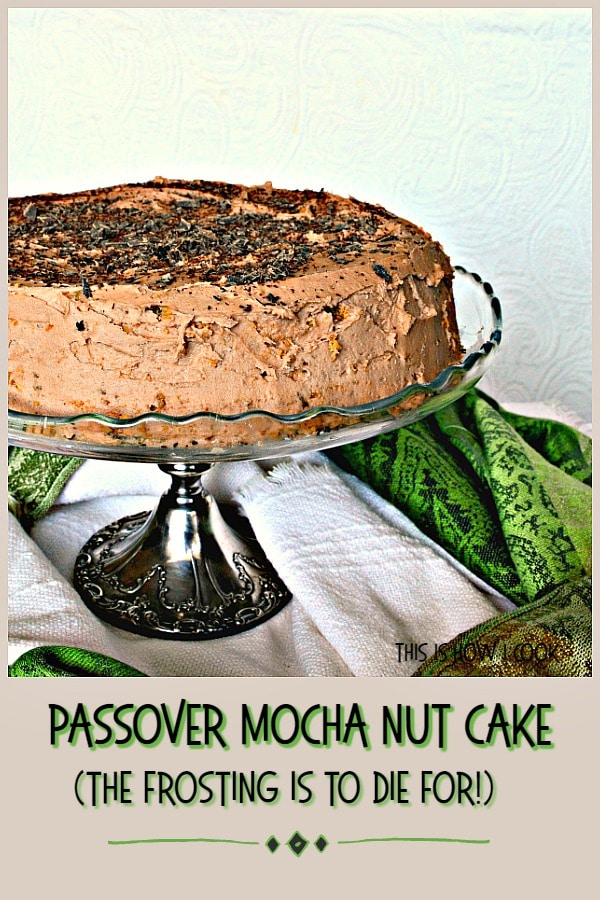 Passover mocha nut cake isn’t just for Passover. Alex and Zoe often requested it for their birthdays.  Try this delicious walnut cake with the best, to die for, mocha frosting ever!

Mocha Frosting
(I do this recipe plus 50% more. You could also double it and then eat the rest with your fingers. Doubled is just a bit too much for this cake!)

I use a 9” springform pan but Ilse used a 10”. I prefer it taller and I also think it stays more moist this way. Keep in mind this is my interpretation of what you see on the above paper.

Matzo meal is not gluten free though I believe many gluten free flours would work in place of matzo meal.

Old Photos but this shows you what the cake looks like split. 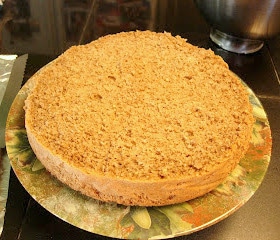 Split cake with frosting in the middle. Like I said it doesn’t look pretty until you frost it. 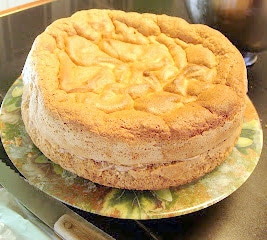 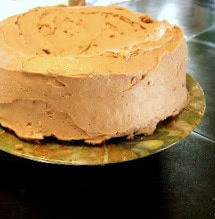 Definitely a grown up thing but my kids always loved it. It's a good memory.

Memories of Passover and grandparents and days gone by. You've helped me think of my own. I remember cakes like this. Used to hate them. We never had them frosted. Now I love them. It's a grown up thing I guess.

For me food and memories go hand in hand. Thanks for reading!

Really nice memory. Family recipes are part of who we are, aren't they? Thanks.

Thanks Cindy. Have you ever made it? If not, you should!