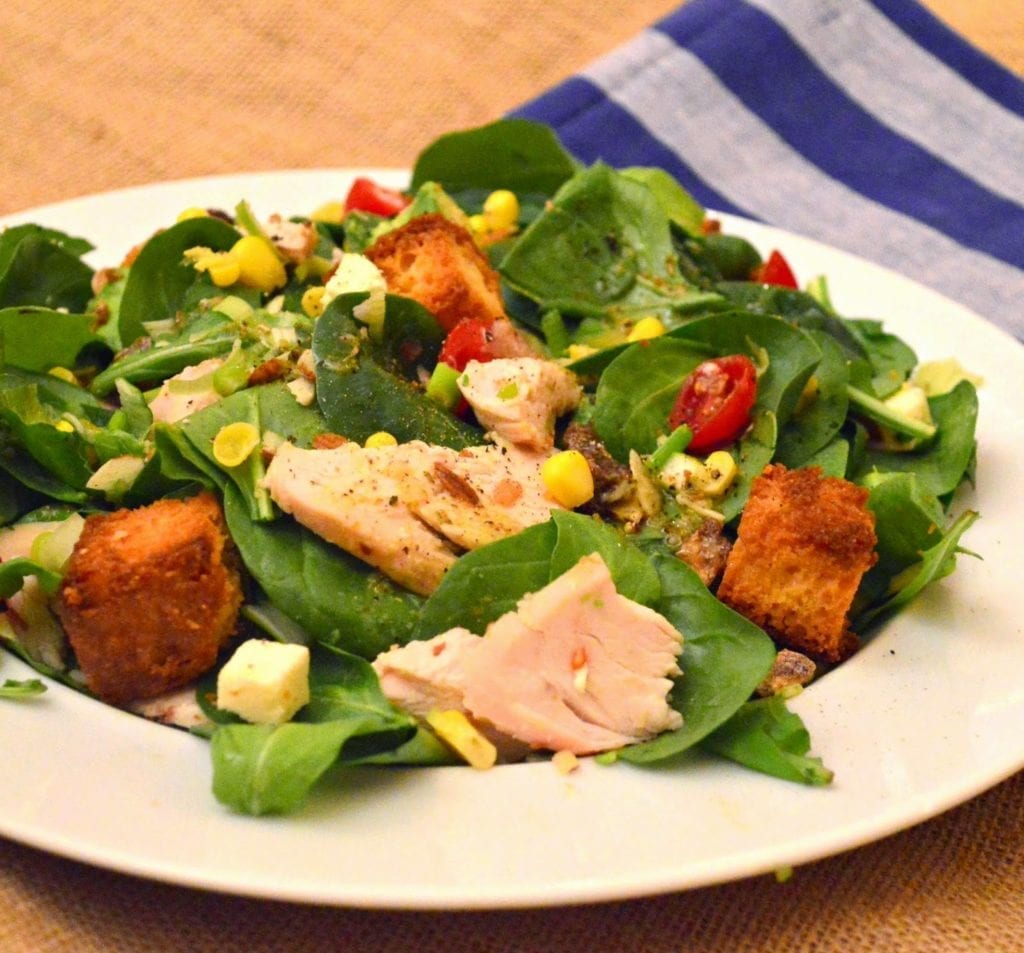 I’ve never thought of salad as feminine or masculine. Salad isn’t quiche-remember how real men don’t eat quiche? Or did they eat quiche? That was a long time ago. I can understand that a salad such as a pretty Bibb lettuce salad tossed with tiny mandarin oranges, sprinkled with lightly toasted almonds might be considered a bit more feminine then say, a taco salad loaded with meat. Does that make a Caesar salad, neutral territory?

But a macho salad? I didn’t name this beast. I ate this eons ago at a restaurant that I think is now nonexistent. Yes, I ordered the macho salad but there were no machos that came with it. Just salad. I shouldn’t say that. This is a salad that even a macho would eat. And whether you are or you aren’t, a macho that is, this salad is, and it is good.

Let’s get something straight here. I’m not a macho lover. But I think we’ve already figured out that I am a Macho Salad lover. So just who is a macho? We all know the song, “Macho Man” by the Village People, right? (True confession… for a long time I though they were saying Nacho Man and I love those.)  But check out this description from the urban free dictionary for the word macho:

male who cannot “lose face” in front of his mates or women. most macho men have the emotional range of a teaspoon and have enough empathy to fill the ink tube in a pen.

Enough said, right? But then there is this:
macho men find any contact with other males to be of “homosexual” nature, with the exception of the “manly handshake”. 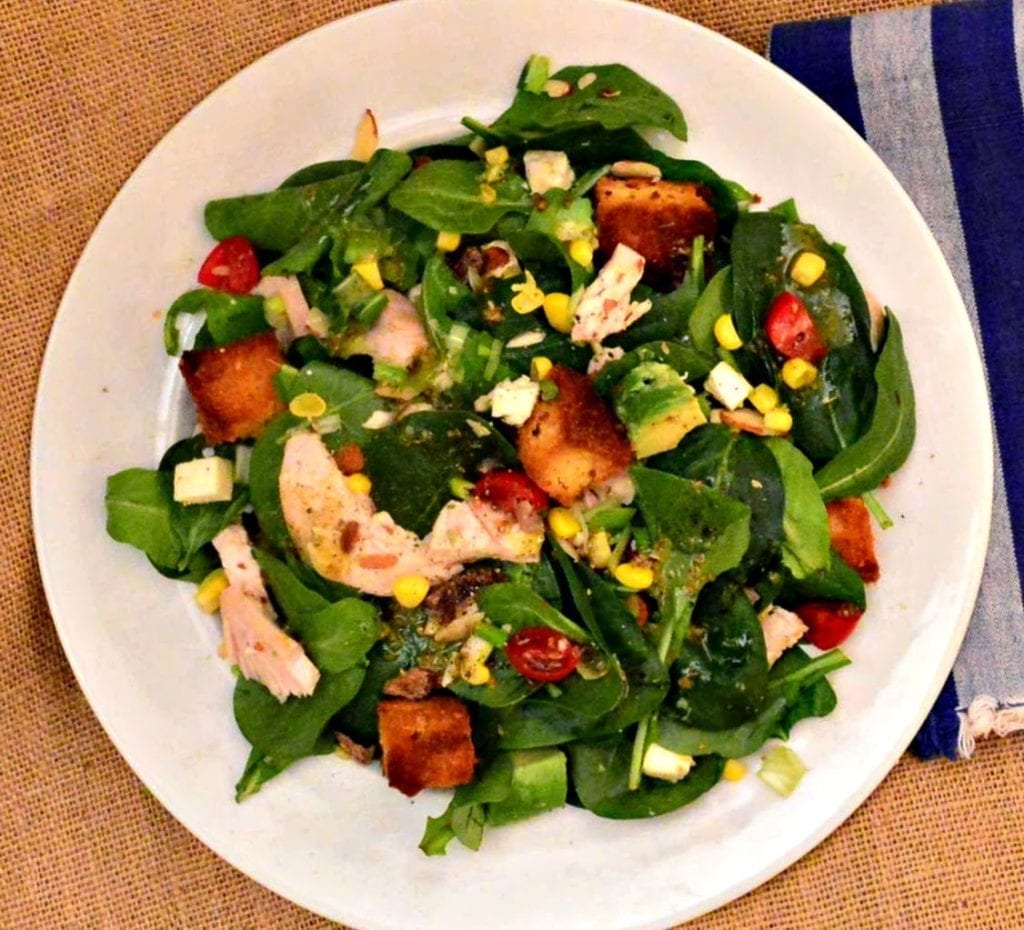 But back to salad..I don’t know how I remembered this salad, but it’s been planted in my mind for awhile. Maybe it’s the sweet cornbread croutons that offset the tanginess of the dressing. Or perhaps the dates off set the goat cheese. And the roasted chicken helps tie everything together. Or is that the avocado that does that? Though you must know that this dressing would taste good on any salad-even one of the feminine variety.

My Manservant loves this salad and seeing how it is now about 60 degrees in Denver, even though the mountains are still being pounded by snow, last night was perfect for a salad. A manly salad. And I only say manly, because it was devoured by my man. I have yet to figure out why if I serve a salad with a meal, he saves it until the end and quite often doesn’t eat it. Whereas, if I serve it as a main course, he loves it! Well, thank goodness for this!

I think even this macho man would eat this salad.

Or perhaps this macho in training. 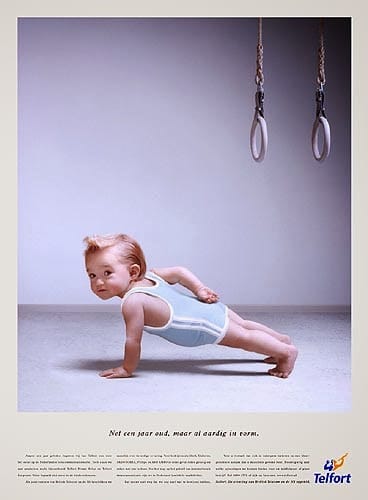 Speaking of which, last night I skipped watching the Olympics to watch the Beatles. Ohhhh. Now that was a good show. Did you see it? And I ate this Macho salad before I sat down to watch TV. And that is all I have to say about salad. Now I’m going to get my hair colored, because if there is such a thing as a Macho woman, well, that’s not me! 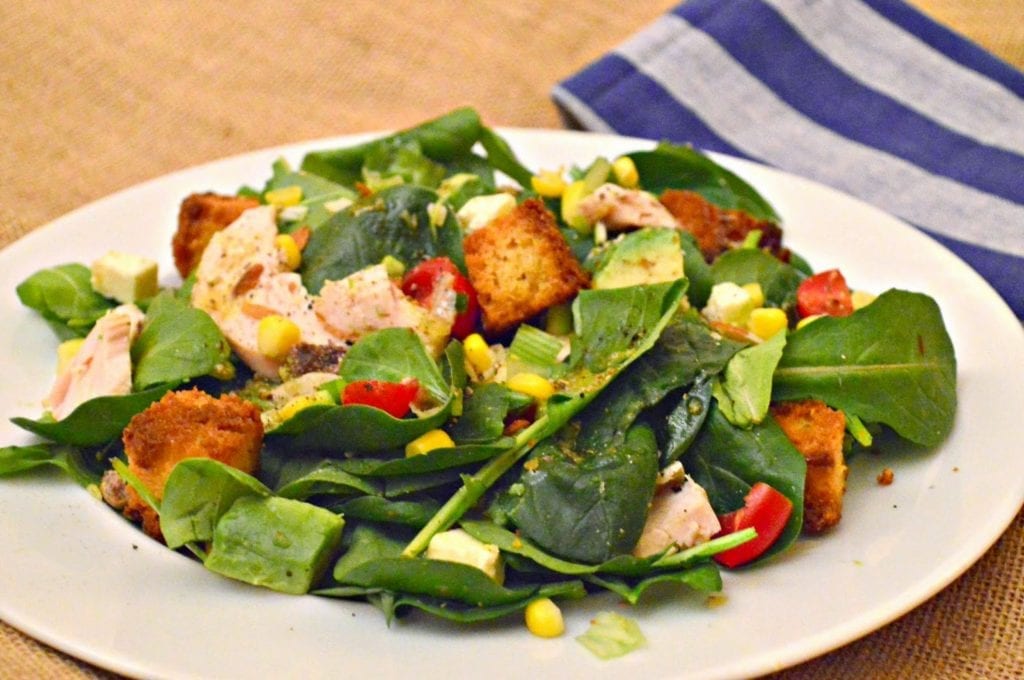 Combine everything except olive oil in a bowl or a 2 c measuring cup. Mix well. (I use the measuring cup because it is easy to pour when it is finished.)
Now drizzle in the olive oil and using a mini whisk, slowly blend the oil into the vinegar mixture to create an emulsion.

(We used all the dressing, but you may have a lighter hand than we do.)

Salad:
4×6″ square of cornbread cut into big cubes (Bake these in 1 T olive oil in a 300 oven for about 20 minutes until they dry out and become croutons. Stir occasionally and don’t let them burn)
3 1/2 c of greens (I used spinach and arugula)
1 c shredded roasted chicken (I use deli chicken if I don’t have leftovers)
10 baby tomatoes quartered or halved
2 t shopped dates or golden raisins
1/2 of an avocado cubed
1/2 c sliced almonds
2 oz goat or feta cheese
2 green onions sliced thin
1/3 c drained corn  or fresh if you have it

Mix all together and toss with dressing. Serve to a macho man-or not!

I used to work at Bandera, where this originated and is served. The name came about from a sick primate that one of the owners' friends worked with. The only thing the primate would eat was this salad, and his name happened to be Macho. Hence... This was the story told to employees, at least. It had nothing to do with gender. JMR

Abbe: You are so funny! Words in my mother language has gender. Salad (salada) is feminine. :) I am guessing that this salad was named macho because it is rustic, robust -- yet quite delish. :)

your post made me sing the macho man song! haha! lovely salad!