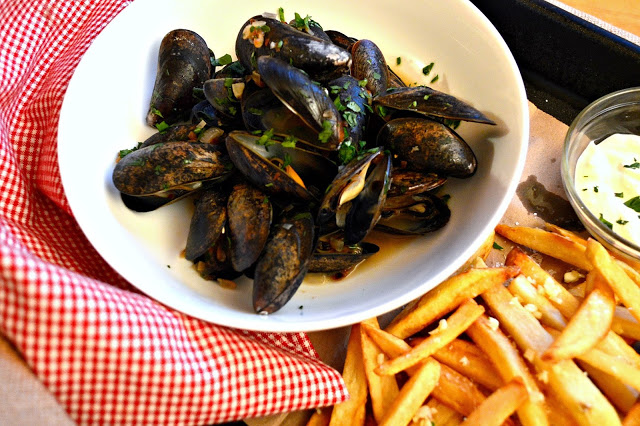 You probably saw this coming, right? The truth is that I made these months ago, and never got around to posting them. I still haven’t had my fries BUT we did hear from HR, formerly known as the officedom of WussMan. WussMan quickly became a hero after recovering from the flu, and now is ready to eat some fries. Just kidding. But he did send the offer. Finally! And it is good and soon my Manservant will be gainfully employed. Not that he wasn’t working hard already. Manservant is a workaholic-he barely comes up for air. He is a man that loves to work and lives to work. They will love him!

Yes, this means we can finally start getting back to the land of the living. Focusing on anything is tough when one has to worry about how to survive the day to day. (Manservant says I am being a bit dramatic here. However it is my blog and I am known for drama anyway.) Thankfully, our family and friends have stood beside us and not abandoned us to the side of the road. It happens. It has happened. Life has a way of still moving, even when you are stuck in the mud. I always tell myself to never judge until you have walked in that person’s shoes. No, I’m not very good at the whole light at the end of the tunnel thing, but I do believe that one has to keep walking. Standing still never does anyone any good.

Damn! Enough philosophy for the day. My head is all over the map, but my belly still wants fries! These photos will have to do me. Yes! These are garlic fries. Very garlic fries. And this is their story: 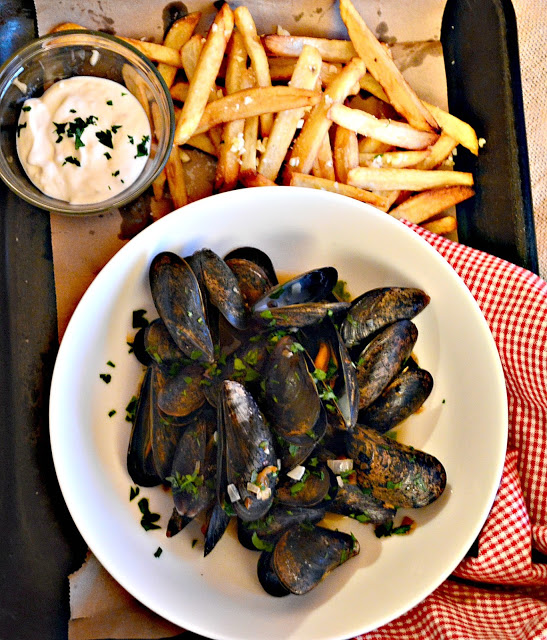 Once upon a time a Princess found herself at the grocery needing dinner. After perusing the offerings she landed at the seafood counter where fresh Prince Edward Island mussels were awaiting her. (No green lip mussels for this princess. She will only eat PEI’s!) Checking with her Manservant, via her handy cell phone, he confirmed that mussels would make a perfect dinner. They are easy to prepare, totally loaded with more protein than steak, and so filled with the sweet and briny taste of the sea. 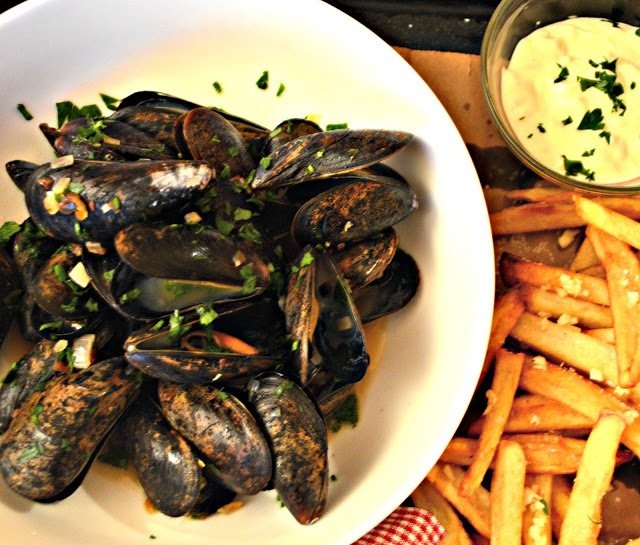 Alas! The Princess did not hear the words French Bread spoken. Would their be trouble in the kingdom? To work the princess went. But not too much work, for she was a Princess and mussels are so easy to prepare. She cleaned her mussels, which were quite clean already, and dropped them into ice water sprinkled with a touch of cornmeal. She then proceeded to select two hearty Russets and quickly  peel them. They were rapidly dispensed into the requisite French Fry cut and soaked in more ice water. After being quickly dried they were ready to fry. Not once, but twice. Then they were turned into a beautiful golden French fry!

The manservant prince soon arrived at the dining table where he proclaimed that his palace smelled so good. “Ah”, said the Princess, “It is the smell of the golden French fries.” Whereupon Prince Manservant asked “But where might be the French Bread?” Looking puzzled, the Princess asked, “What do you mean-French bread? You said French fries”. The prince objected. “I said French Bread, not French Fries!” But upon tasting the golden French fry and seeing the princess’s happiness at having French fries, he no longer needed his French Bread.

The Princess and her Prince Manservant dined happily and the kingdom survived another day.  THE END. 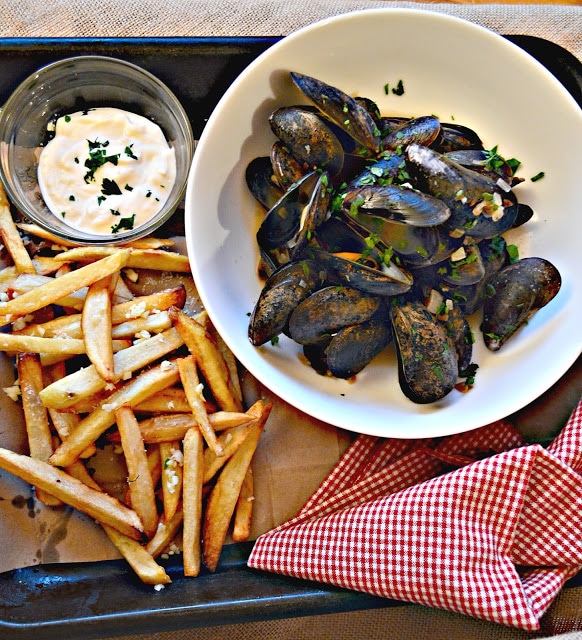 Heat the butter in a large pot (with a lid) and add the onions, shallots, and garlic. Cook until wilted and add the mussels. Add half of the parsley, and all the wine. Cover closely and cook for about 5 minutes, or until the mussels are opened. Serve with pasta or rice or French fries! And some French Bread to sop up all that savory broth.


Directions:
Peel if you’d like, your two glorious Russets. Cut into the size of French Fry you prefer. Soak in cold water-the longer the better. This helps get rid of the starch that clings to them. Remove from water and let dry on paper towels. Blot the top and try to remove all moisture.

Heat  a few inches of oil to 300 degrees. I use my Dutch oven. Gently place potatoes in hot oil and fry until just taking on a bit of color. You are basically softening the potato and not frying it all the way through. You want a crispy French fry, don’t you? You may have to do this in two batches. This keeps the potatoes from overcrowding which makes for limp fries and also takes the fries longer to cook. Remove from pot and drain on paper towels.

Now raise the temperature of the oil to 400 degrees. Place the fries into the hot oil and fry until golden and crispy. Sprinkle with lots of salt and toss with garlic. Drizzle with garlic oil if you have it. Serve with ketchup. However, I usually serve mussels and French fries with aioli, not ketchup. You get an extra dose of garlic this way! 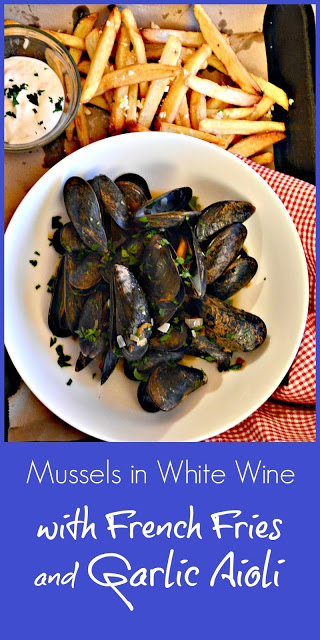 Hello Abbe Odenwalder,This post is very nice. I love the Mussels and Fries recipe. It is very delicious to look at. Thank you for sharing the ingredients and recipe. Hope your next recipe will published soon.

One of my favorite combinations and a recipe from one of my all-time favorite cookbooks! Love the garlic-aioli with the fries--I can just taste them...yum!

This is a very cute post and great looking recipes! Thank you so much for sharing this with us at Saturday Night Fever (last Saturday!), and I'm so sorry for just making it over here to say so. This week got away from me ;)

I made mussels last week...but had to have another meal for the hubby :/ Dorie's recipe is almost exactly like yours...so, soooo good!

This looks like such a great meal! I haven't had mussels in so long so I'm just craving it!