Chocolate Lava Cake And a Birthday 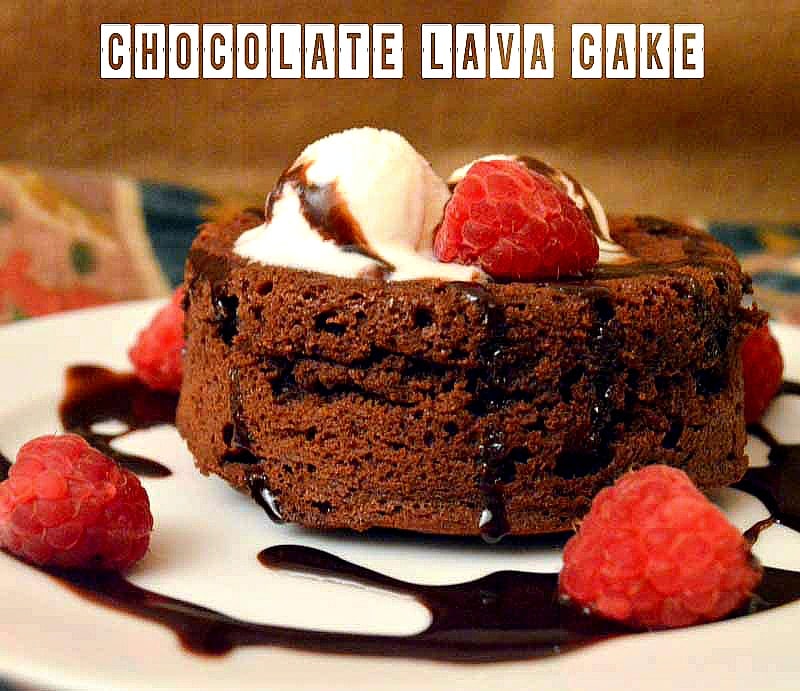 Chocolate Lava Cake is a family favorite. Make them in 15 minutes, and set aside until ready to bake. Place in oven for a long 8 minutes and serve! Rich and full of chocolate, they will be begging for more!

A long, long time ago or once upon a time, (but it really doesn’t matter as this fact is not essential to the story), two people met at college and fell in love. After 4 years of dating, 3 college degrees and a move to Florida, they got married. They traveled and worked and had dogs. They ate and cooked and made lots of friends. They moved back to Colorado and were very happy but something was missing.  Several years of trying to add to their happy lives was taking longer than usual, but they persisted.

And so it was, one February day, with perfect ski conditions, Person A bent down to buckle her ski boots and just couldn’t do it. Luckily, Person B was able to secure the buckles. And later, not long after lunch, on a particularly beautiful day of skiing, Person A decided she was totally exhausted and called it quits for the day, much to Person B’s chagrin. 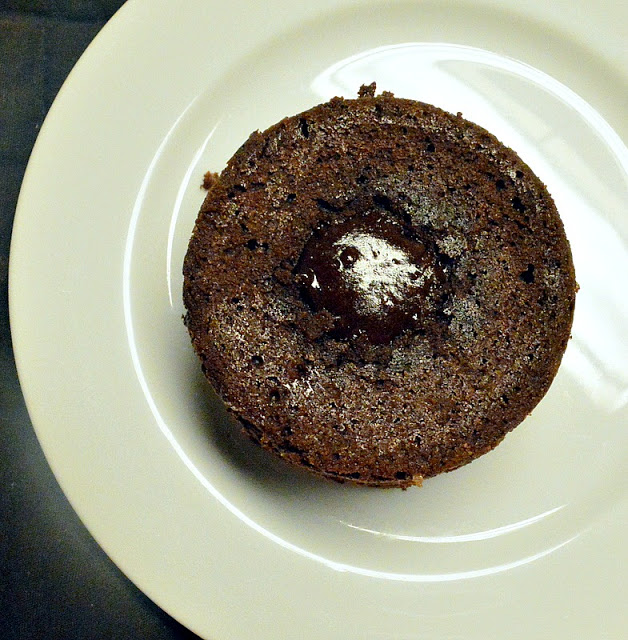 Soon after Person A called the doctor to complain about how miserable she felt where upon said doctor asked if she was pregnant. Person A said she hadn’t thought about that, where upon said doctor said to try a pregnancy test. Said pregnancy test turned immediately blue. She reported these results to Person B who asked, could it be? Whereupon Person A said she’d schedule an appointment with the doctor. Person A went by herself to the doctor, where the doctor immediately confirmed the strip’s results and said they are rarely ever wrong. Immediately an ultrasound was done, where it was discovered that Person A was quite pregnant, at least 10 weeks pregnant, and one baby was two. Yes, there was a reason Person A could not buckle her ski boots.

Person A immediately called Person B who was working  and in a meeting. She said she needed to talk to him now and he walked out of his meeting where he was given the doctor’s results. According to the coworkers in the room at the time, Person B’s face turned as white as a sheet and as he turned to go out of the room he walked straight into the wall. 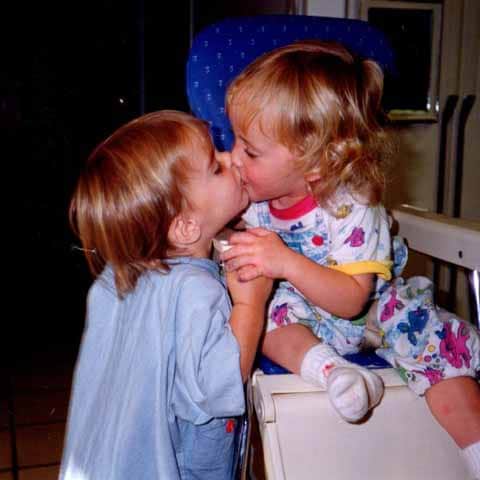 After dutifully reporting the news to said world, Person A and Person B endured a long, hot, happy summer until Person A reported to the hospital on August, 24, 1990, walked up three flights of stairs because the elevators were out, and delivered two healthy babies. One boy and one girl, much to the relief of Person A. They had 10 fingers and 10 toes weighed 4lbs, 2oz and 5lbs,11oz and were 17 and 18 inches long. They were also the most beautiful humans that Person’s A and B had ever laid eyes on.

Said news was reported to the world by expensive long distance calls as cell phones were still used sparingly and facebook had yet to have faces. Google was not googling and instagram was not instant, as it had not been born yet. But two babies had, and though they were not greeted by throngs of photographers and news journalists at their birth, many people flew in a week later to participate in a bris and baby naming, where upon two glorious babies came to be called Alex and Zoe.

After many birthday parties that ranged from clowns and magicians to pioneer parks; scavenger hunts, bike parades and back yard camping; laser tag, chocolate and the ubiquitous pool parties; the day is now just quietly celebrated with life and love and memories. And though the little ones have flown the coop,  Person A still remembers the glories of her children’s childhood and all the love that abounded each and every day, birthday or not. She is happy to report that Zoe just made her first chocolate heirloom cake for herself and friends in Philadelphia and that her brother celebrated his at a beer festival in San Francisco. 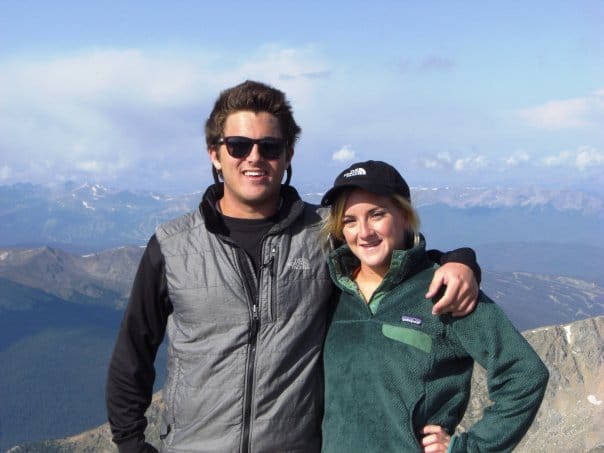 Person A quietly celebrated their birthday while recreating their 7th birthday meal. This was attended by their teachers way back when, where everyone ate calamari, linguini with clam sauce, Caesar salad, garlic bread and the before mentioned heirloom chocolate cake. Both teachers were pleasantly surprised when they were not served pizza, hot dogs or mac and cheese, which apparently were customary meals for a 7 year old birthday. No, Alex and Zoe, developed good eating habits at an early age and now are good cooks themselves.

Though Person A did not bake the heirloom chocolate cake she did make a spectacular molten lava cake that burst with the flavors of chocolate and joy. She sat quietly as she savored each bite while remembering the joyful noise of each birthday and hoping for more to come. Each bite was taken without the slightest bit of guilt and each bite was spent gulping back tears and memories. Each bite was full of love and pride that she had raised two totally perfect children in a totally imperfect world. And though no photographers were present, and no words were spoken, she remembered the day her children were born and she rejoiced. 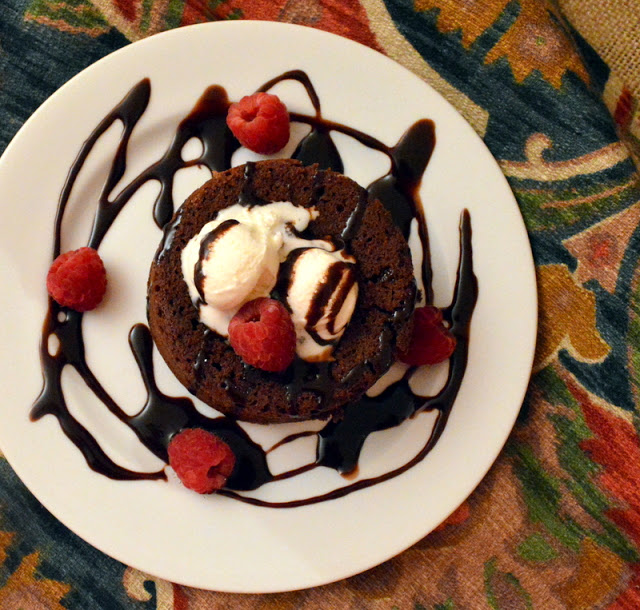 Melt chocolate and butter in microwave for 45 seconds. Stir until chips are melted. Whisk in egg and egg yolk. Add vanilla, salt, powdered sugar and flour.

Bake for 8-10 minutes. You may eat these from the ramekins or you may unmold them and serve them directly on the plate. Top with ice cream or whipped cream.

These  can be held on the counter until you are ready to bake them. In our case, this means do the dishes, put in the cakes and then cakes are ready to devour. You can bake these up to about 14 minutes, but the centers will not be as runny or molten. This cake is extraordinary and perfect for any occasion. 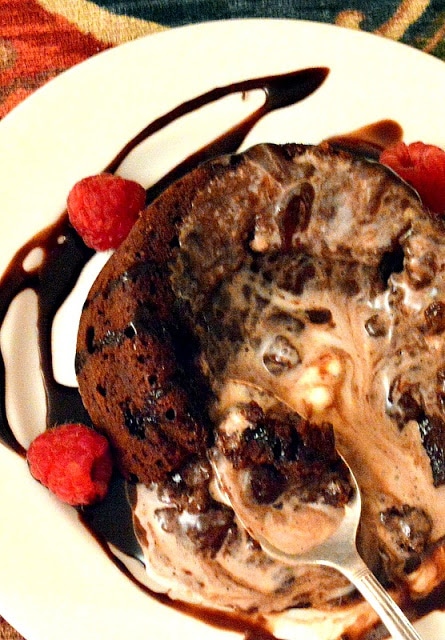 August 26, 2013 By Abbe
36
Donburi Bowl or Fast Friday Barbecued Shrimp and the Challah is Rising 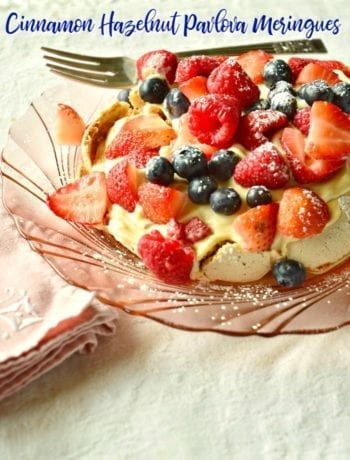 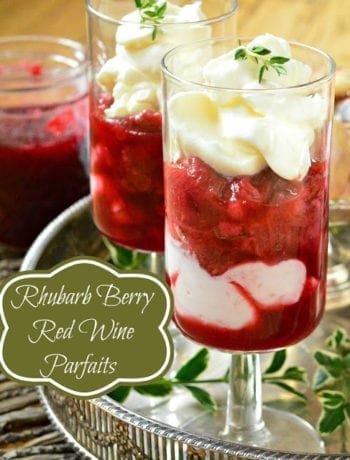 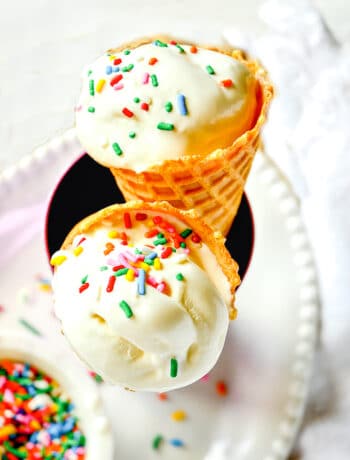