Potato Kugel (Ilse’s One and Only, Not for Passover, No Eggs, To Die For Potato Kugel) 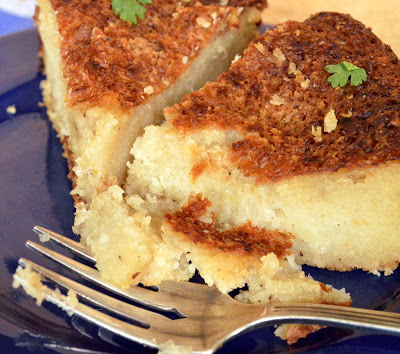 The above is a very long title because it is hard to put into words the truth about this egg-less potato kugel.  Honestly, I wish I knew the truth. Kugels, usually made from potatoes or noodles, are often served as a side dish on Shabbat. The word for kugel in German means sphere, globe or ball. Ilse’s kugel is made in a round shape though most kugels now, whether noodle or potato are usually made in rectangular pans.
Ilse was my grandfather’s wife. I’ve given you several of her recipes before, but it is time to share this one. Ilse married my grandfather in, I believe, 1968. I was almost 11. They had a whirlwind six month courtship and married. They had been neighbors. Ilse had lost her husband and my Papa had lost his wife. Ilse was 47 and my Papa, 62. They both knew a lot about life and a lot about living.
At the time some considered it scandalous, after all, a short courtship it was. But it wasn’t long? before Ilse won over our hearts and our tummies. I don’t really know how they met, other than they were neighbors, but I like to think that Ilse knocked on Papa’s door with this kugel to give him. Or maybe it was her mandel bread or her spritz cookies, or her nut cake. Possibly her German pancake or maybe it was a steak. My Papa used to tell me that his favorite foods were a good steak, a nice scotch and Ilse’s potato kugel. Yes, this man had his priorities straight.
I’m not sure when Ilse came to this country but I think it was when she was a young teenager.  I often imagine her and her red hair, in a long wool navy coat, carrying her cast iron black kugel pot, after she got off the train in dark, rainy, Chicago. The other hand might have been lugging a sewing machine, but of course, this is the movie version that plays in my head. In actuality, I really don’t know, but I was told the kugel pot came with her. Ilse was a person to be believed, so I believe it. She was a woman of many talents; one of them being cooking and the other being sewing. She was a remarkable seamstress and knitter. She married her first husband at 18 and I think he died in his mid thirties. (I know many family members read this blog so it would be nice to have correct info!) She was married to my Papa longer than she was married to her first husband, that I know. 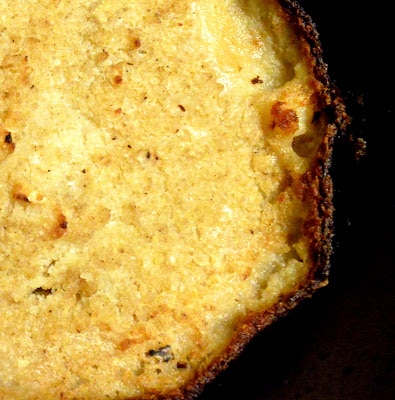 Fast forward about 25 years to the day I decided I had to get the nut cake and kugel recipes. Calling long distance from Denver to Kankakee with my pencil in hand-I was ready! Ilse was not one to give out her recipes. I think I’d been asking for at least 15 years. She always had an excuse. “It won’t turn out the same, because you don’t have the pot… I don’t really know the measurements… You can’t make this for Passover… It won’t work in Denver… I’ve never written it down… I can’t show you how fine to make the potatoes… I used to do it by hand…” On and on. I decided sometimes I’m a lot like Ilse; full of excuses, but somehow I usually get the job done. And that day, I did. I managed to get THE nut cake recipe and THE kugel. Thanks be to GOD! 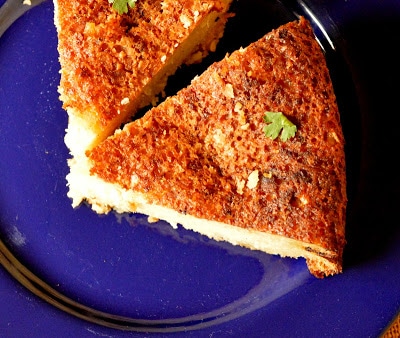 Ilse was right about a lot of things; the most important being the potato kugel pot. She told me I needed the right pot and that a glass one wouldn’t work. After cracking the glass one I owned in the oven, I can tell you, she was right. (Yes, I’m stubborn, too!) This recipe requires you to pour water onto the kugel halfway through the cooking process. OKay! I know that cold water poured into a hot glass dish can cause the glass to crack. I just didn’t want to believe it. So after a few more years I decided I needed to buy a cast iron pot. I went to Ace is the Place, and picked up a very heavy, cast iron, Dutch oven, perfect for 5 minute bread and this kugel. Just not at the same time!
I don’t remember the dimensions of Ilse’s pot but I believe it was smaller in circumference than the one I bought, as I remember Ilse’s kugel being taller than mine. But I was little then, so everything seemed bigger. Right?  This pot does work, though it will never be as seasoned as Ilse’s pot, I’m sure. You see, after the kugel bakes for three hours, it must be flipped out of the pot, so that the golden exterior of the kugel is what you see.  This is my favorite part.
The flipping, that is. But I will tell you that it is not easy with a big Dutch oven and a pot not seasoned as well as Ilse’s.  And I am not sure where to find a smaller size cast iron pot. But, the kugel is worthy and it brings Ilse to me, whenever I bake it.
I have heard this potato kugel compared to a potatonik. I have not had a potatonik so I couldn’t tell you. I can tell you that is is good! 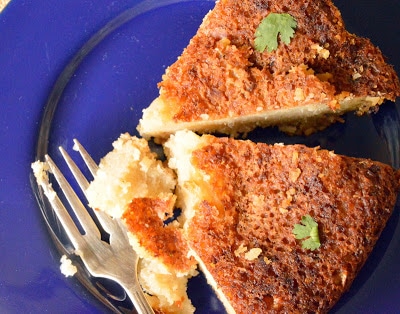 This is a kugel like no other. I have searched and searched and would love to hear if anyone knows of one like this. It requires two white bread rolls. Your guess on size is as good as mine, but I used dinner size rolls with a soft crust and interior. Not too soft, though! Hence the reason this is not a Passover kugel-because it contains bread. It also has no eggs, which is a unique feature, because all the kugels I ever see contain eggs. This kugel takes three hours to bake.  Yes, if you’ve ever baked a kugel, you can tell this one is different.
This kugel is light, even without the eggs. It is creamy and potatoey with hints of onions and a bit of pepper. The crust? OMG. THE CRUST! Crispy and crunchy and golden. This is what you get for baking for three hours- an out of the world potato crust. Filled with a mouthwatering, comforting interior of creamy potato goodness. It is best right out of the oven. Microwaving leftovers is good but not the same.
Ilse was one of a kind. I know not where she got her recipes. Was it her mother? I do not know. I know they are good, solid, recipes though and the kind that you remember years later. Heirlooms they are, and it is important to pass them on. They are gifts that keep on giving, so please accept this gift from me to you, in this new year. Ilse might not have given you the recipe, but I will. And I think if she knew, she’d be quite pleased. After all, it’s always good to pass the love. 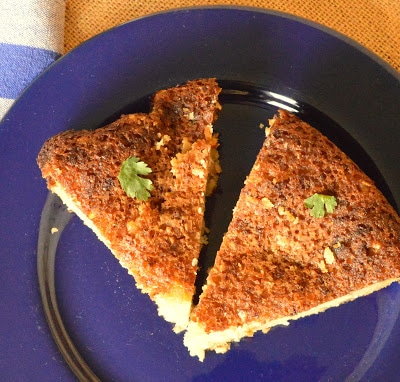 Ilse’s Potato Kugel (Serves 8-10)
6 Russets, ( a bit larger than your palm in length) peeled
1 large peeled onion
Salt, Freshly ground pepper, garlic powder, chicken boullion granules
2 soft, but not too soft, white bread rolls, soaked in water and squeezed dry
3 1/2 T crisco or chicken fat (schmaltz) or olive oil, plus more for greasing the pot
Preheat oven to 350 with 8-10″ pot inside. You want the pot, good and hot, so the potatoes sizzle when you pour them in.
Cut your potatoes into chunks and let your food processor do the work. Using steel blade grind potatoes until they are not quite mush. They should still have some texture.
Cut onion into chunks and chop it finely in food processor. Mix potatoes and onion together in large bowl. Stir in about 1 t of salt and 1/2 t of pepper, 1/4 t of garlic powder and 1/4 t of chicken granules. (Don’t worry if you don’t have the granules.) Then stir in the squeezed rolls and your choice of fat. If you have chicken fat, it gives a lot of flavor. Make sure everything is well distributed and mixed well. At this point, I always take a spoonful of the mixture and put it into a microwaveable bowl and cook for about 20 seconds. This is how I test for seasoning. You may need more salt or pepper. Whatever. Make it to your liking.
Take pot out of oven and grease well with crisco, oil or chicken fat. I use about 2 tablespoons. You don’t want your kugel to stick. The more seasoned your pot gets, the less you will have to use.
Pour kugel mixture into hot pot. Bake uncovered at 350 for 90 minutes. Now pour 1 c water over kugel and bake for 90 more minutes.
Take your golden, dark brown, crispy kugel out of the oven. Take a platter and flip the kugel onto the platter so the bottom of the kugel is facing up. Slice into wedges and serve. Savor the moment. Savor the love.
More Ilse Recipes:  And yes, I still need the mandel bread. Does anyone have it?
German Apple Pancake
Spritz Cookies
Ilse’s Mocha Nut Cake
September 18, 2013 By Abbe
22
Barbecued Shrimp and the Challah is Rising Boulder Ice Cream, White Chocolate Crumb, Hot Fudge Sundae and A Giveaway 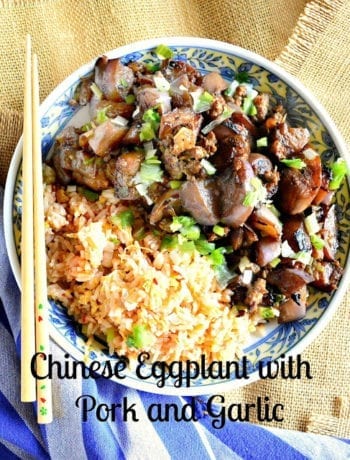 Chinese Eggplant with Pork and Garlic and China! 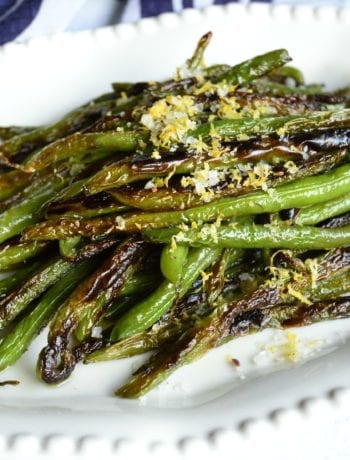 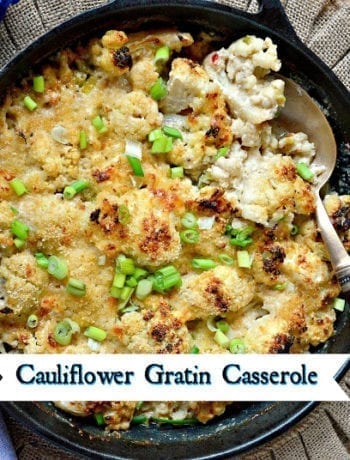