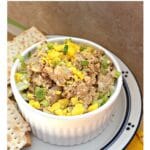 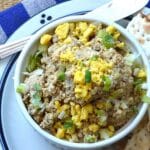 Chop Liver, a standard Jewish appetizer or often made into a sandwich, is kind of like a rustic chicken liver pate. Don’t knock it until you’ve tried it. 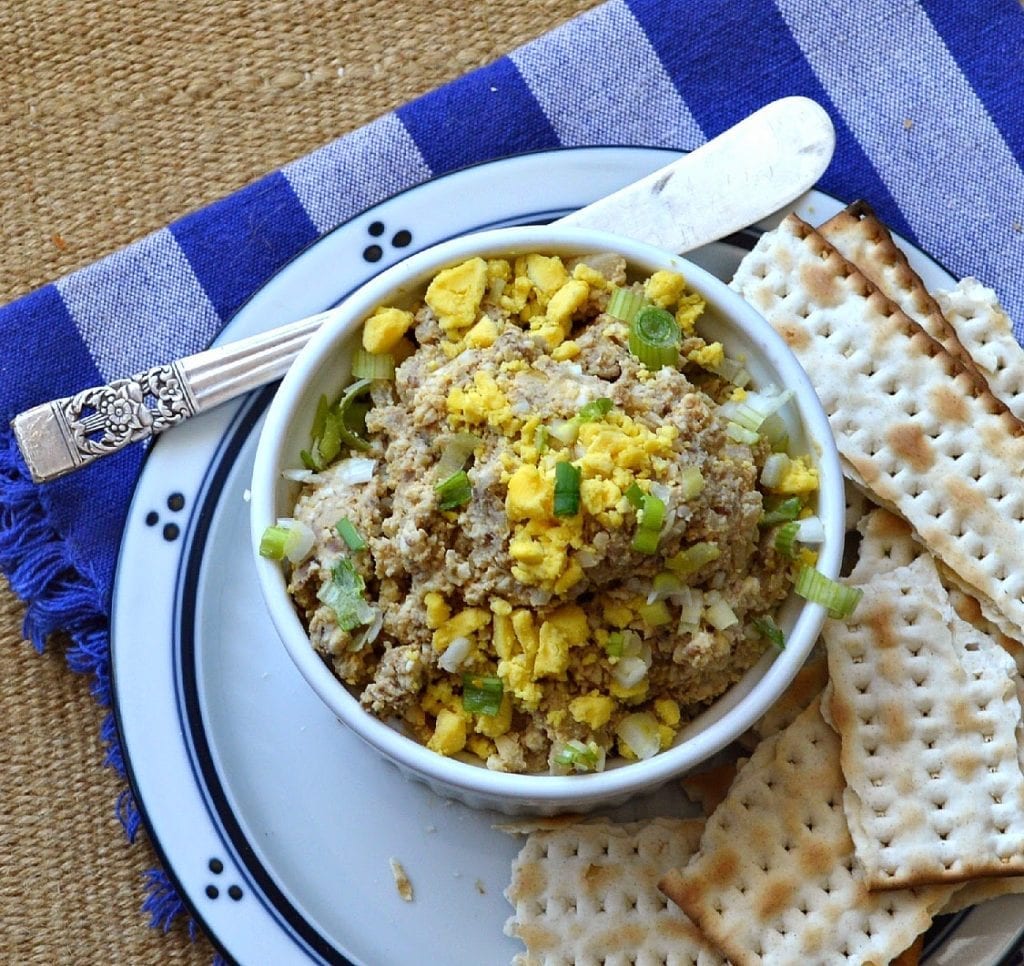 Chop liver has a bit of an image problem. I agree. It’s not like it’s called pate or mousse or something fancy in French. It’s just a very simple dish that happens to be made out of chicken livers.

Throw in a few hard boiled eggs and some sauteed onions and you’ve pretty much got it. In my case, I sauteed the onions in duck fat, not chicken fat or schmaltz.

It would have been easy to turn it into pate. But I held back. This is after all, a Passover chop liver recipe, not fancy chopped liver pate.

Liver seems to have fallen out of favor unless you are a goose, in which case you are a foie gras and highly desirable.

But a chicken is still just a chicken-liver in this story. And the poor cow-I’m afraid his liver is used only when Weight Watcher’s requires their one liver meal a week; but maybe they changed that requirement since I was a teenager.

I do recall my mother making it with onions each week with regularity. And I liked it.

And then there is pork liver which becomes Braunschweiger and a lot of people eat that including moi, who used to eat it every morning for breakfast in the form of Oscar Meyer liver sausage. I ate it on toast as a child, on Pepperidge Farm white bread with minced onions on top.

And then there is the duck’s liver and he can also become the desirable foie gras. So, really if you think about it, liver is still pretty popular in most forms.

You know the saying, “What am I, chop liver?”

And on those days I just tell myself, “Get over it!” Sometimes it works. Sometimes I still feel like chop liver. Overlooked. Second fiddle. But at least today I can eat it! 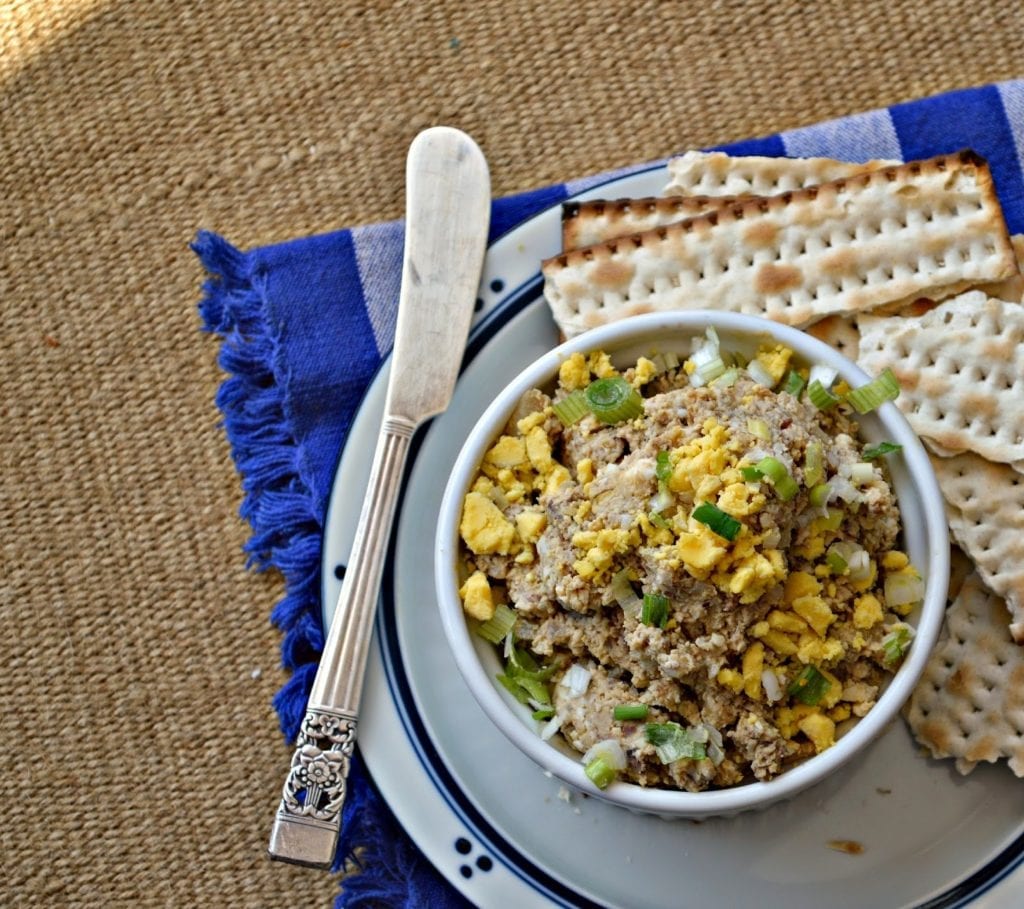 Which leads me back to waste not, want not. I’m not sure if they ate a lot of chickens way back when, but they did make a lot of chicken soup and roast chickens. So whether they kept all those livers and saved them up in the days before refrigeration, well, I can’t tell you. My research doesn’t go back that far.

But I can tell you that it doesn’t take many livers to feed a lot of people. I used about 3/4 of a pound and still had enough to give some to a friend. The rest we’ve been eating for about a week.  So figure this will serve about 6-8 people as an appetizer and that is what chop liver is meant to be-unless of course you put it on a sandwich in which case all bets are off. Some like a lot, some not so much spread between their bread.

I can also tell you that when I’m making liver I have two very close friends that don’t leave my side. The smell of liver is truly intoxicating.

The onions and the liver create a highly addicting aroma, especially if you are a dog. I think my dogs dream of Jewish holidays as much as I do.

So here goes. Venture forth to the land of liver. Remember to wash them well and trim off all the yukky green parts and the extra fat. Sometimes you get a good batch where there isn’t much to trim. The rest, well, sometimes they are a little gross.

And be careful of those livers. They tend to be fragile, so handle them gently. Just like people like to be treated gently, the same goes for liver. 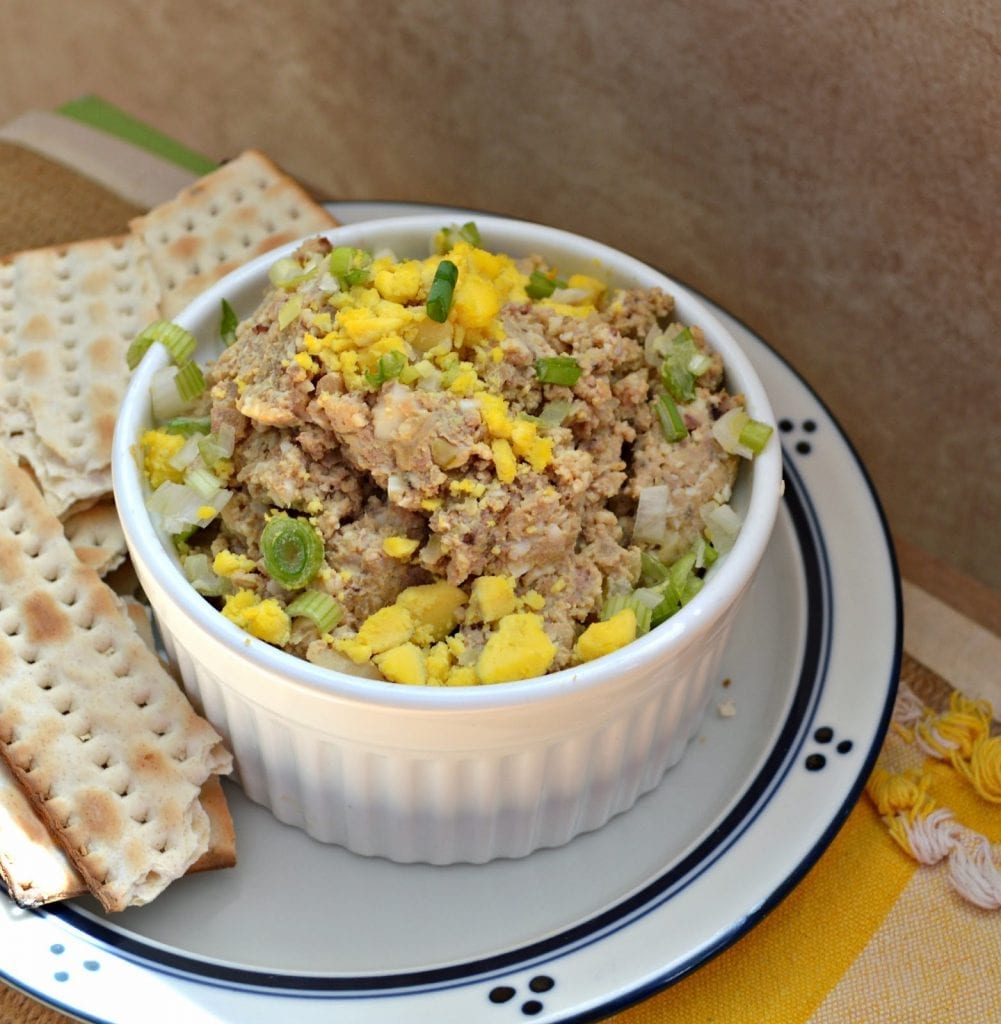 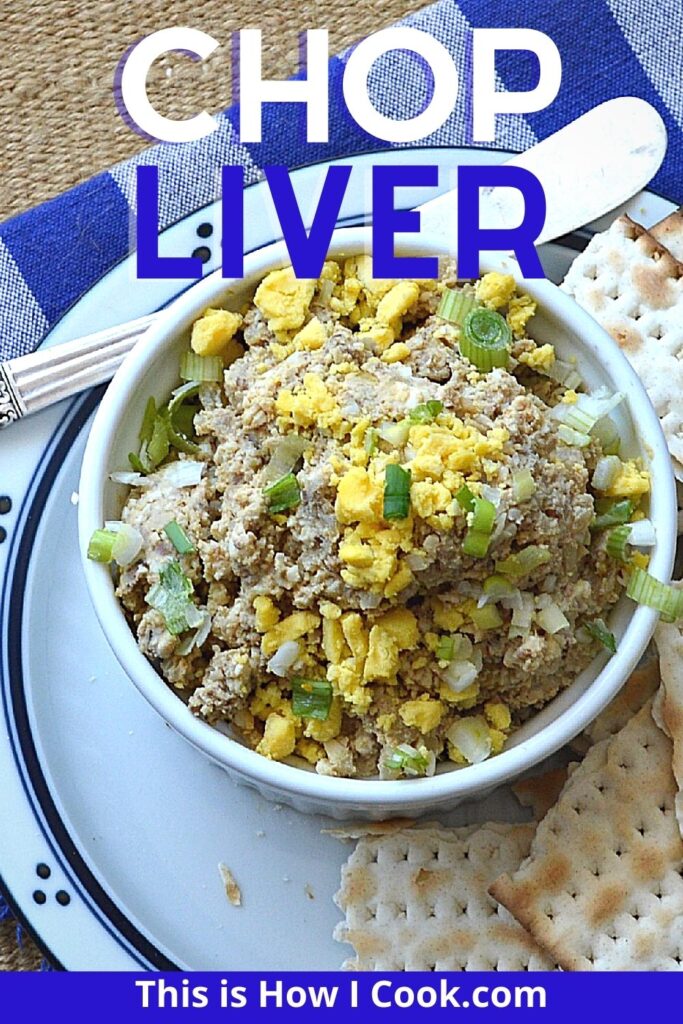 Chop Liver, a standard Jewish appetizer or often made into a sandwich, is kind of like a rustic chicken liver pate. Don’t knock it until you’ve tried it!

Be it called chopped liver or pate, it changed my view on chicken liver. I didn't like cooked chicken before maybe because it was cooked in bigger slices or chunks but once I had chopped liver I was instantly hooked. Thanks for sharing this wonderful recipe. I'll definitely need to save up some chicken fat or duck fat before I attempt it.

I think you have to grow up with them! Not to worry!

Both my PIL and my Mom LOVE chicken livers - ew! Sorry, not my cup of tea, but glad you liked it! :D

Barb, they are good just like you said.And easy to make. I also love fried chicken livers. My dad used to buy fried chicken every Sunday night when i was a child and he always used to come back with a container of fried gizzards and one of livers. Don't know that they still do that anymore. We always fought for the last liver.

The onions mask the smell, Cathleen! But really if you like pate you will like this! And chicken livers are sweeter than beef livers!