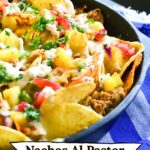 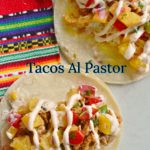 Al pastor tacos or nachos are made with braised or grilled pork. Cooked with lots of seasonings and pineapple juice, this is my favorite taco. Or nacho! 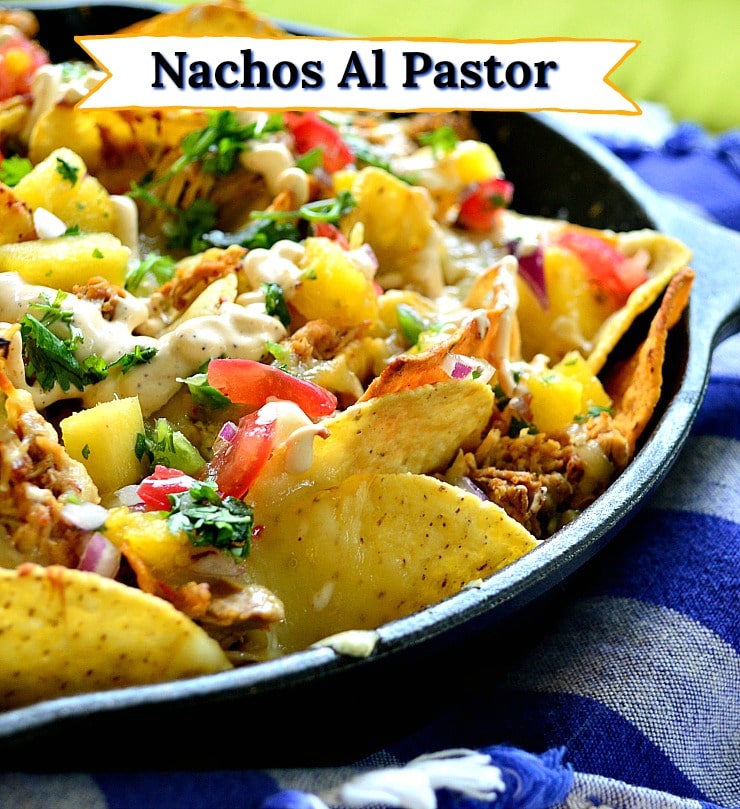 Al pastor tacos are technically made with pork  cooked on a spit, covered with a variety of seasonings.

They were brought to Mexico by Lebanese immigrants who commonly made lamb shawarma on a spit.

As traditions changed pork  was substituted, but the seasonings used to season al pastor often contained cinnamon and other Middle Eastern spices.

Today it seems the one common ingredient in al pastor, besides the pork, is pineapple.

As a street food, pineapple is often served on top of your taco, which I think is what put al pastor on the map.

The al pastor recipe below contains pineapple juice in the braising liquid.

Additionally, a pineapple salsa really sends this taco into another hemisphere.

Wanting to simplify? Don’t feel like making pineapple salsa? A thin wedge of pineapple on your taco would also do the trick.

No one really knows how pineapple got into the mix in the 1930’s in Puebla, Mexico, but you can read  about the mystery and al pastor tacos here. 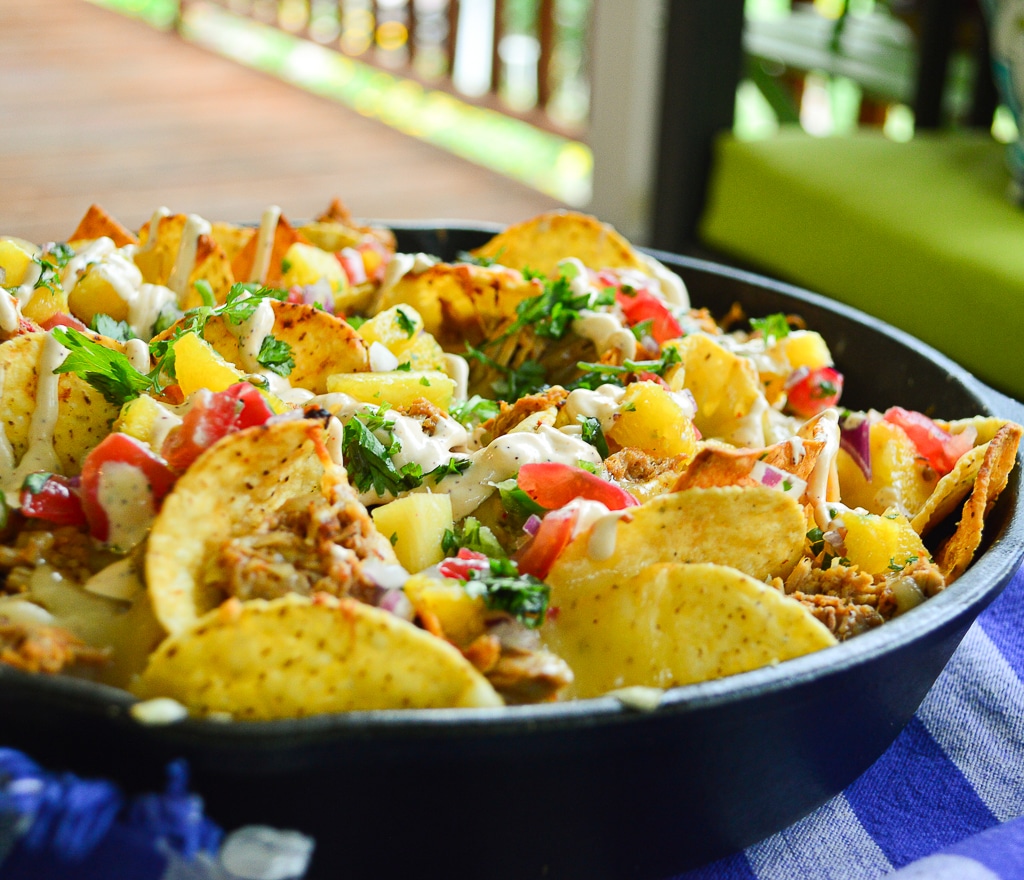 Cooked on a spit and over fire and in the past with lamb, certainly makes me think of a shepherd taking care of his flock.

But sometimes cooking outside isn’t  an option, which makes this braised pork cooked inside very appealing.

After the pork is braised if you want to give the meat more of a crispy texture it is certainly acceptable  to dry fry it in a hot skillet.

Whatever you decide to make, tacos or nachos or both, just make sure to try this recipe. It’s Zoe’s favorite taco and mine, too. Enjoy! 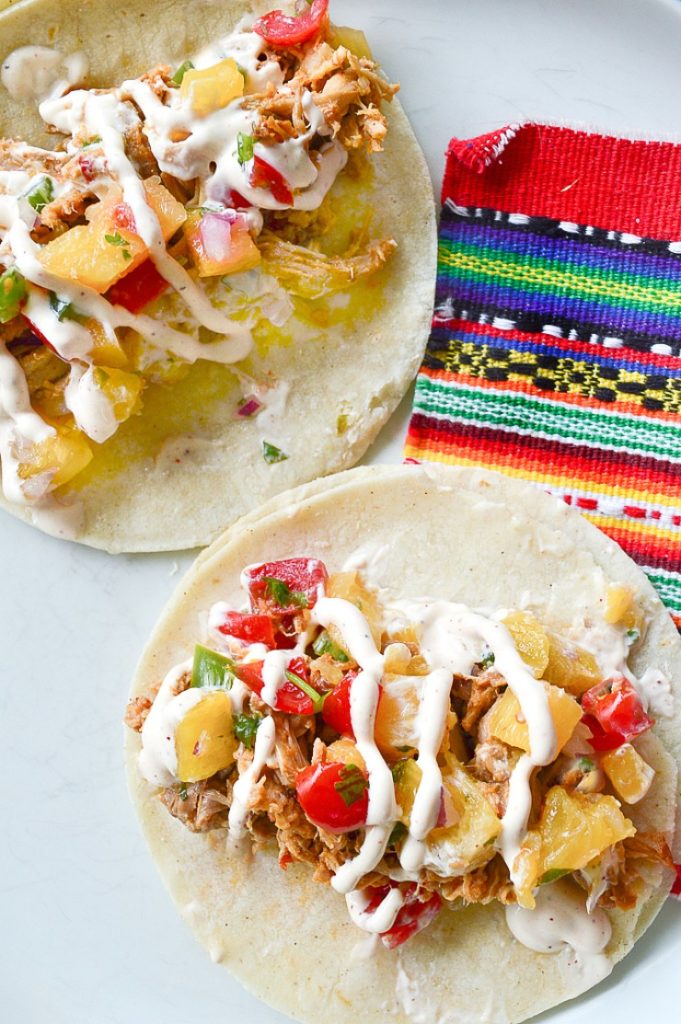 Where do I start? Over the last few weeks of my untimely disappearance, I wish I could tell you  I was kidnapped by a bunch of extremely handsome hunks, (much like my favorite in the Ralph Lauren ad) and taken to a desert island with white sand beaches where I was waited on hand and foot, given countless back and foot massages, and entertained quite lavishly.

Alas, that was not the case.

No; not in any particular order. My mind  is too discombobulated to try that!

In the last several weeks that no one has missed me (SOBS!!!!), my faithful daughter flew home to help me give a bridal shower for her best friend.

This best friend lived across the street, in the cute yellow house, that was almost Zoe’s second home.

Many good memories were created in the last 25 years between our two families, so it was with pleasure that we were able to honor Whitney, as the guest of honor. 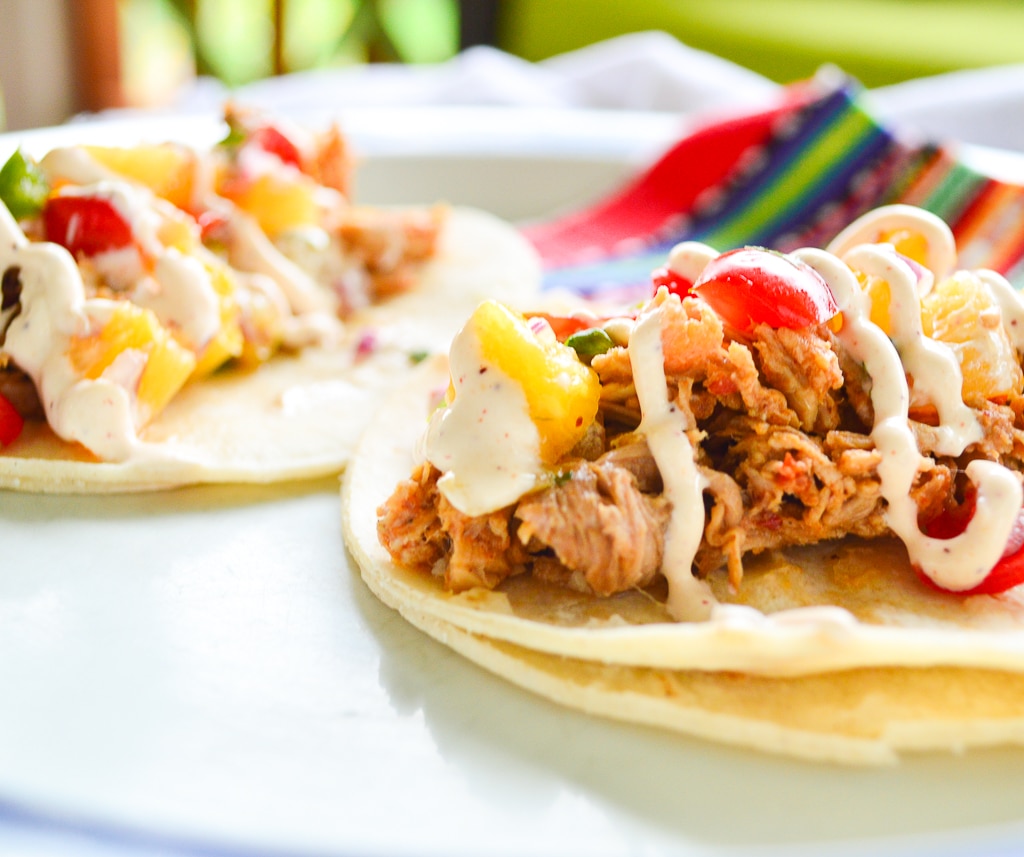 This quickly morphed from a California Dreamin’ shower to become a Mexican themed shower, but the wedding is being held in Costa Rica in January, which is close to Mexico and California, right?

(Needless to say I am now on the Costa Rican beach diet, that began with  throwing out all unhealthy food from my refrigerator. But back to the shower.)

hanks to Pinterest, Zoe had a particular way that she wanted this shower to be.

Let me say this. It was a fun shower, but I was the one in the kitchen.

I was the caterer and only a hostess for a few moments, until I was also told to take photos.

They had margaritas. I had a hot pad.

I wanted a taco BAR. She wanted passed taco baskets already made up;”like in a restaurant, Mom.”

And she wanted two types of tacos which meant making 24 individual tacos and 12 Corn in a Cups.

She wanted chips in little baskets with individual cups of guacamole and queso! AND this was just for happy hour.

Well. They were happy.

Especially when it got to be pinata time and they found it was filled with cute little bottles of alcohol, lace panties, socks, and even candy! 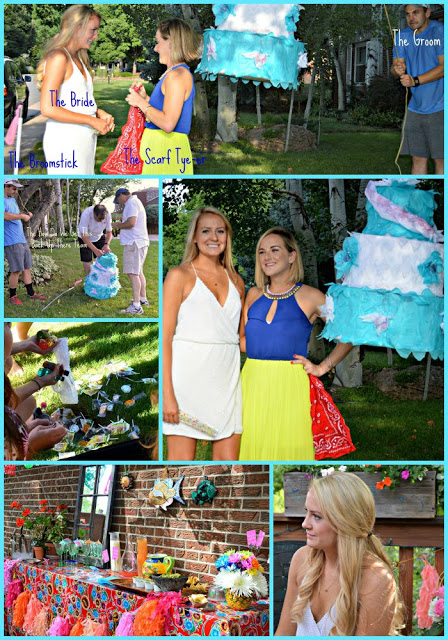 I haven’t even mentioned dessert.

Nor have I told you that to achieve this feat of showerdom, we needed to find little cardboard tubs to hold the taco chips in.

This was the hardest feat of all until I ran into my blogger friend Karen, who said go to 5 Guys and get the peanut baskets that are by the front door.

Thanks 5 Guys and thanks Karen. We only spent 2 days looking at numerous places to figure that out.

Nor have I told you about special ordering the tiny corn and flour tortillas to make the tiny tacos, because the tortillas in the grocery store were too big. Well; the princess thought so.

Raquelitas, located downtown with no name on the door, was willing to provide. Yes, I did have to buy 5 dozen tortillas each.

I think I need to open a retail establishment that specializes in tiny tortillas like they serve in restaurants. I would sell them in cardboard tubs like they have at 5 Guys.

Behold the menu. (My mind is still fuzzy, but I think this was it.) 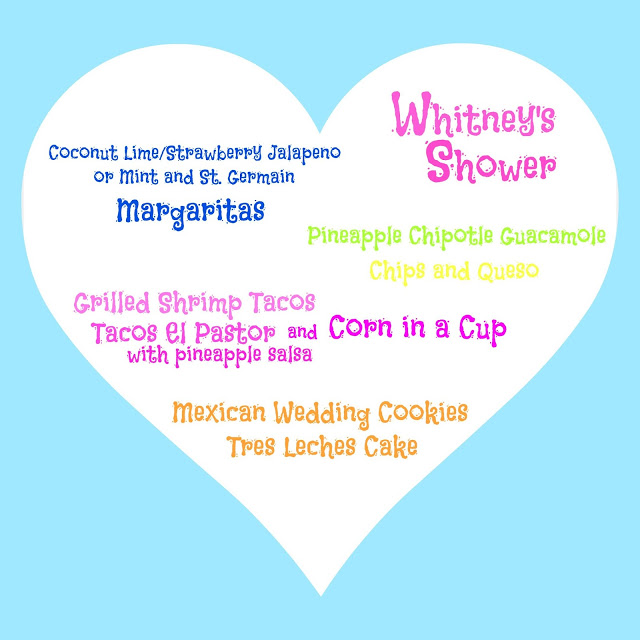 I wish I had photos of the tacos in their cute little al pastor tacos baskets with the shot glass containing corn in the cup.

But I did get photos of the beautiful girls. The happy, young girls. The possibly tipsy girls… 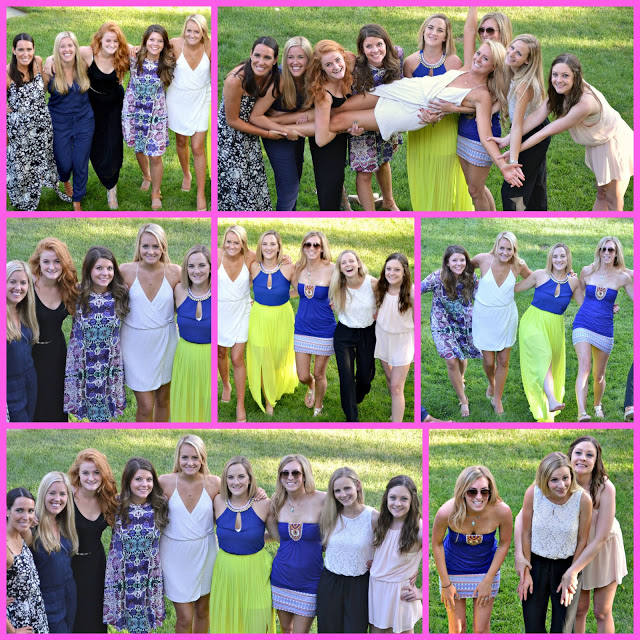 And before you know it I cleaned up and Zoe headed back to Philly.

In between our shower activities Zoe had plenty of time to fall in love with Geordie.

I must say we made a pretty good team, but next time I hope she reminds me to hire someone to help. What was I thinking?

In my current downtime I’m getting ready for the annual RV arrival and trying to find the true meaning of summer.

The folly is coming along and Geordie is growing.

My last post was number 300 and I never ever thought I would be doing anything for this long.

Well. I guess This is How I Cook! 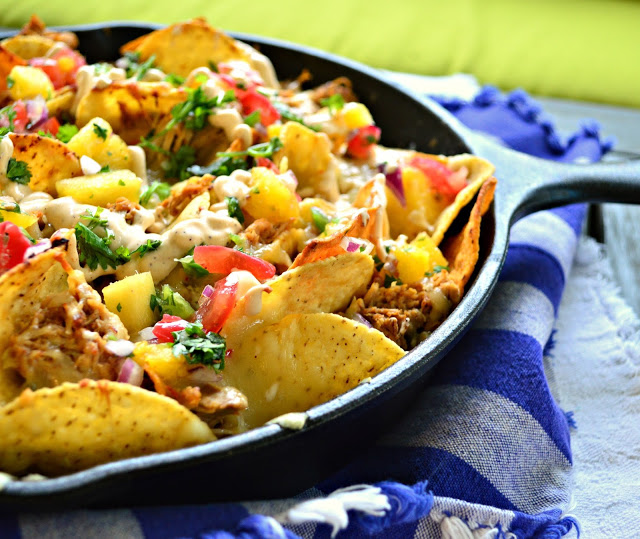 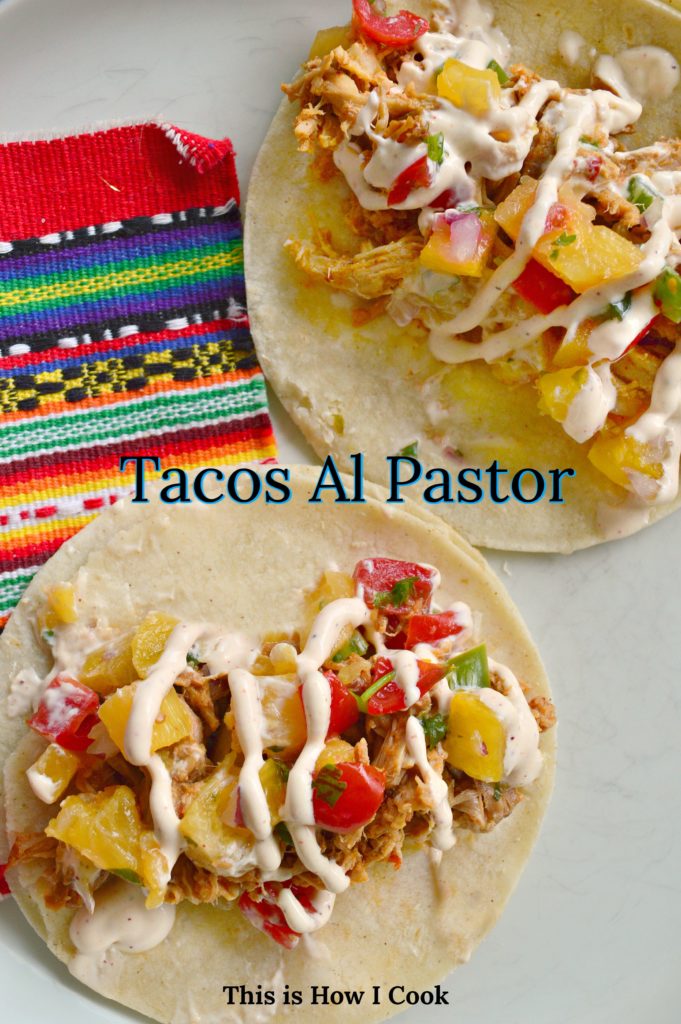 Tacos or nachos al pastor are made with braised or grilled pork. Cooked with lots of seasonings and pineapple juice, this is my favorite taco. Or nacho.

Serves: About 25 tacos or more

Time To make: About 20 minutes to prepare/About 4 hours to cook

1 7 oz can chipotles in adobo

Makes enough for about 12 tacos and 1 batch of nachos.

Time to make: About 15 minutes

1/2 of a pineapple, chopped into fairly small pieces

1 pinch of salt or to taste

Chipotle Drizzle Sauce (Perfect for tacos and nachos and even sandwiches!)

Time to Make: About 5 minutes

Tortillas for tacos, your preference

Tortilla chips for nachos, your preference

Grated Cheese, about 2 cups for nachos

Combine salt, oregano, cumin, pepper and chili powders in a small bowl. Rub the mixture into the tenderloins and place in a Dutch oven.

In a food processor place 1 can of chipotles, diced pineapple, red onion, garlic, lime juice and vinegar. Process until smooth. Pour this mixture over tenderloin. Now pour the beer over the top. As long as the tenderloin is covered, you have enough beer. Drink the other.

Over medium heat, bring mixture to a low boil. Turn temperature down to low and simmer for about 4 hours or until pork can be easily shredded. Let it cool in its juices and then use two forks to shred it. For tacos and nachos you want the mixture dry, so I drain it very well. For other purposes you may want to save some of the liquid and reheat it together.

Mix together and put a spoonful on each taco or sprinkle over nachos.

Mix this up in a mixing cup and then pour it into a squeeze jar. If you want it thinner add more lime juice, milk or heavy cream to thin it. Feel free to drizzle to your heart’s content!


To assemble tacos:
Take one  corn or flour tortilla and top with a few spoonfuls of drained pork. Top with some shredded cabbage and then some salsa and cheese if you like. Drizzle some sauce on top. Keep the portions dainty as it is much easier to eat tacos this way!

For nachos:
I kept this simple. Arrange 1 bag of tortilla chips in a cast iron pan. I stand them up like rose petals and then place the meat and  about 2 c of jalapeno jack cheese between the “petals” and on top. Bake at 425 until cheese is melted and chips are crisp. Top with pineapple salsa, extra chopped cilantro and drizzle some sauce. I use a spatula to get these out of the skillet and serve them on plates with forks!

What an adorable Theme for a bridal shower! And your tacos look great!! Gee, I don’t know how I missed this post ? But glad to see it now! Have a great week!

Really nice photos Abbe. And thanks for sharing the shower with us. Love the Mexican theme. And aren't tacos al pastor just the best? Love that slow cooker recipe. Pinned.

I would rather do what you did than be kidnapped by hunks..any day!:)

I gave so many showers and loved each one.. for the moment and as far into the future as I can see..mine are done..

Looks like it was just perfect Abbe..how cute are young girls today anyways?

Sounds like you've been busy in such a fun way, Abbe (except for the poop detail, that is). The shower must have been wonderful and the tacos sound amazing! Your daughter and Geordie have bounded for certain! Glad to see you back ;)

I missed you but I knew you had stuff going on - we will always be here whenever you have time to post! Now I want nachos!!