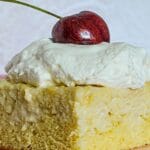 A 3 milk cake is a sponge cake that is doused with a combination of milks and then left to soak. Some may say that is is like a trifle, but whatever the case, I urge you to give this simple coconut rum  tres leches cake a try! 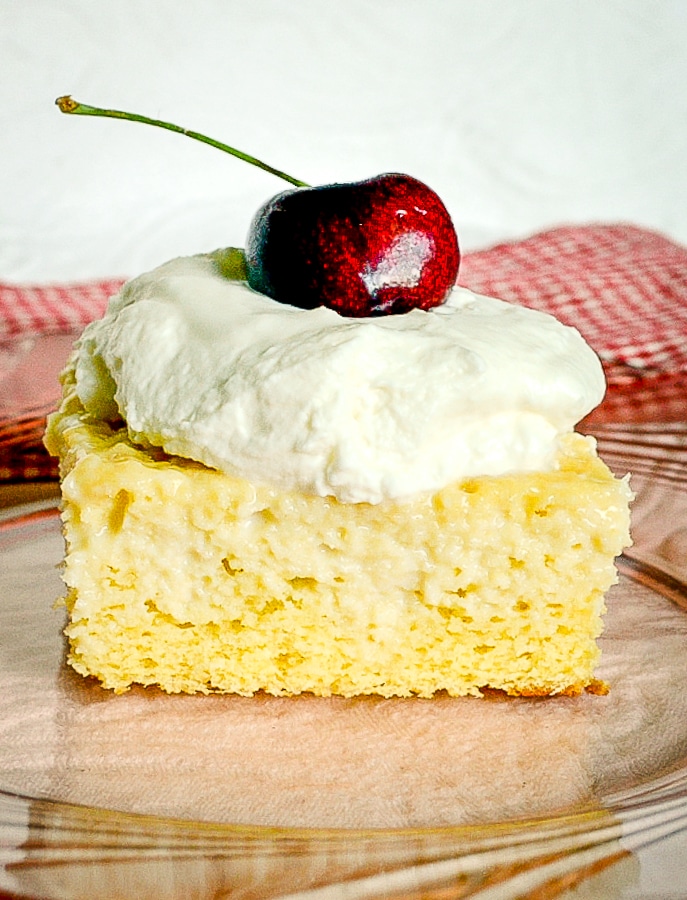 Have you ever made a 3 milk cake? Actually have you ever tasted one? This coconut rum tres leches cake is outstanding!

I don’t know why it took me so long before I had my first bite, but this Mexican cake is a winner in my book.

Though this 3 milk cake is very popular in Mexico, no one knows its true origin, but the consensus is that it comes from somewhere in Central America.

There are many theories about this cake’s origin.  One says that in 1810, evaporated milk in cans became available in Central America. Then in 1850 condensed milk added.

Supposedly Nestles printed the tres leche recipe on the cans of milk which popularized the cake. Others say that as Europeans began to settle the Americas, recipes like tiramisu and rum cake, both of which are cakes that are soaked in some kind of liquor, were adapted to the area.

Whatever the case, I can attest that this tres leches recipe is so good!

This easy tres leches cake begins with a sponge cake. I’ve seen these made with other types of cake, but even though this recipe involves beating the egg whites separately, the batter only contains four ingredients.

There are many different types of recipes for this cake. Basically a  sponge cake, as it acts like a sponge when absorbing all the milks poured on top.

Most sponge cakes do not contain leavening, and the only fat is from the egg. The eggs are beaten until light which helps create air pockets or holes in the cake which makes the cake great for absorbing lots of flavors; in this case, the milks!

Several recipes I found did contain butter in the cake batter but I decided that this 3 milk tres leches cake  recipe sounded rich enough and who needs all those butter calories anyway? 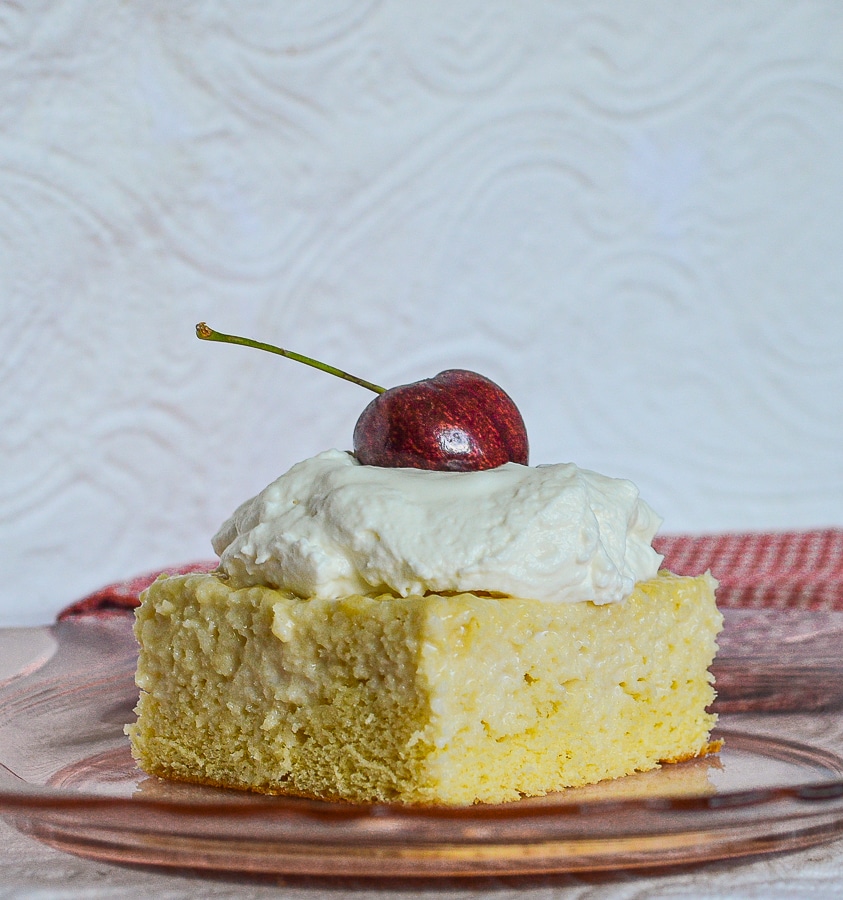 After is is baked, the cake is poked with a lot of holes and then doused with a three milk mixture to become a 3 milk cake!

That’s why this cake is called tres leches, meaning three milks, because there are three milks involved in the soaking of the cake.

Generally,  evaporated milk and condensed milk make up two of the three, but other choices involve heavy cream or half and half. I added coconut milk.

The frosting also contains heavy cream so in actuality that is 4 milks, but who’s counting?

My friend Becca came over to cook with me and after figuring out the main course, we then had to figure out dessert. She suggested pie, which I like, but didn’t think very Mexican, so I suggested a tres leches cake which she had never heard of.

Frankly, I’ve never had one, but I always love seeing them in Mexican bakeries, all gorgeous with their thick white, fluffy frosting and always topped with colorful slices of fruit, making them look like Carmen Miranda’s fruit basket hat.

Well, we decided to give it a go and I think we are both glad we did.

OK, let’s catch our breath here… Let me tell you this was a great cake. A superb cake. A really, really, good cake. And when you read the directions it sounds so weird. So squishy (you’ll see).

But what the heck? Everyone raves about it, so I wanted to see what all the fuss was about.

There are many  variations of this cake and many involve  how to frost it. Some call for a meringue frosting. Others believe in a whipped cream frosting which is what we chose.

We dolloped the whipped cream on top, rather than frost it, because we knew there would be leftovers. I think this worked great and allowed us to keep the cake longer.

This coconut tres leches cake only got better the longer it stood. It never got soggy, only more moist and creamy.

I still have one piece left in the fridge and we made it last Saturday. Rabbit catcher would not let me throw it away! 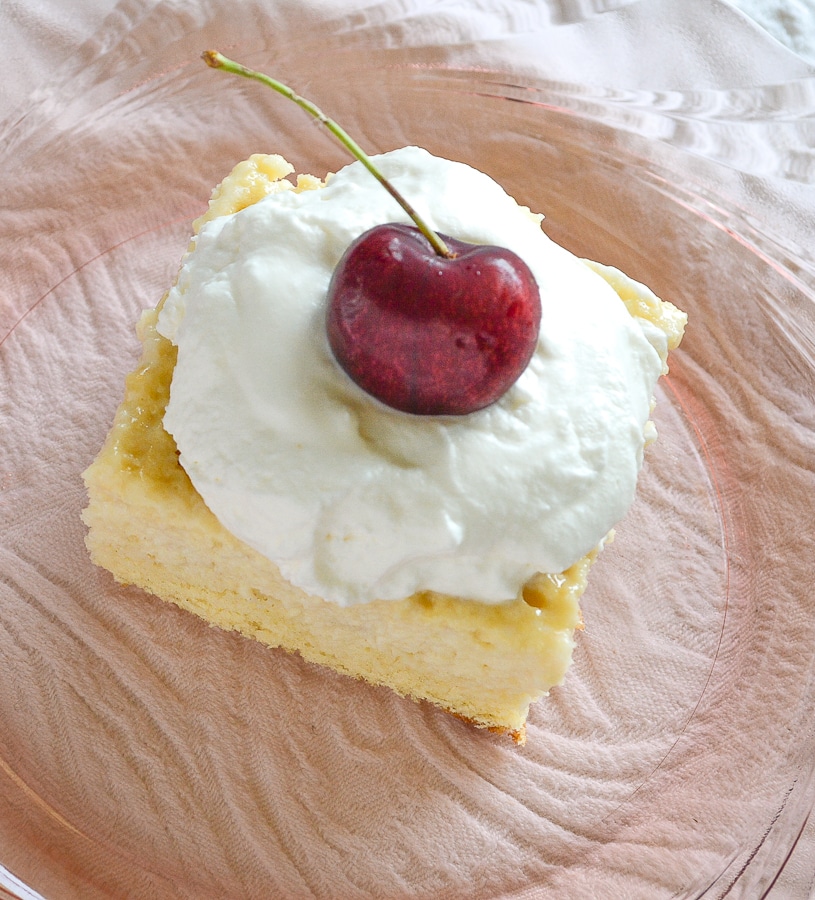 Flavoring this cake with rum was a great idea.. I also used coconut milk and meant to top it with some dried toasted coconut flakes, but Becca and I were busy gabbing, and  well, we just forgot!

Frankly, even though we used coconut milk, the rum flavor was more predominant. You could use cinnamon or caramel for other flavor variations, and I would love to try chocolate, but haven’t figure that out yet.

Making dinner with Becca, who is just 16, was a lot of fun! I mean I’ve known Becca since she was a very wee one and Becca, who has a million and one things to do to keep her busy, asked  if she could cook with me.

Well, Becca and I had a fabulous time which I think made her mom happy, too.

Becca wanted to make my  avocado corn soup  which helped settle us in to a Mexican menu. We had loads of fun while making salsa and fresh refried black beans and Spanish rice.

Flat New Mexican chicken enchiladas with red chile were the main course and I know Becca wants the recipe for that chicken, pronto! But we’ll get to that!

I think it’s because it was the first thing she tasted after she rushed over straight from a sleepover birthday at a friend’s house. (Boy, I wish I looked that good when rushing straight over after an all nighter, because I bet that’s what it was!)

Laura, you’ll be happy to know she eats very healthy. She started with chicken and then gulped some Crystal Light and a Diet Coke, then finished off the rest of the snickerdoodle cookies I had on the counter. I can easily see why she stays so skinny and gorgeous!

While this cake may not make you skinny and gorgeous, this divine tres leches cake will make you very popular. It really is that good! 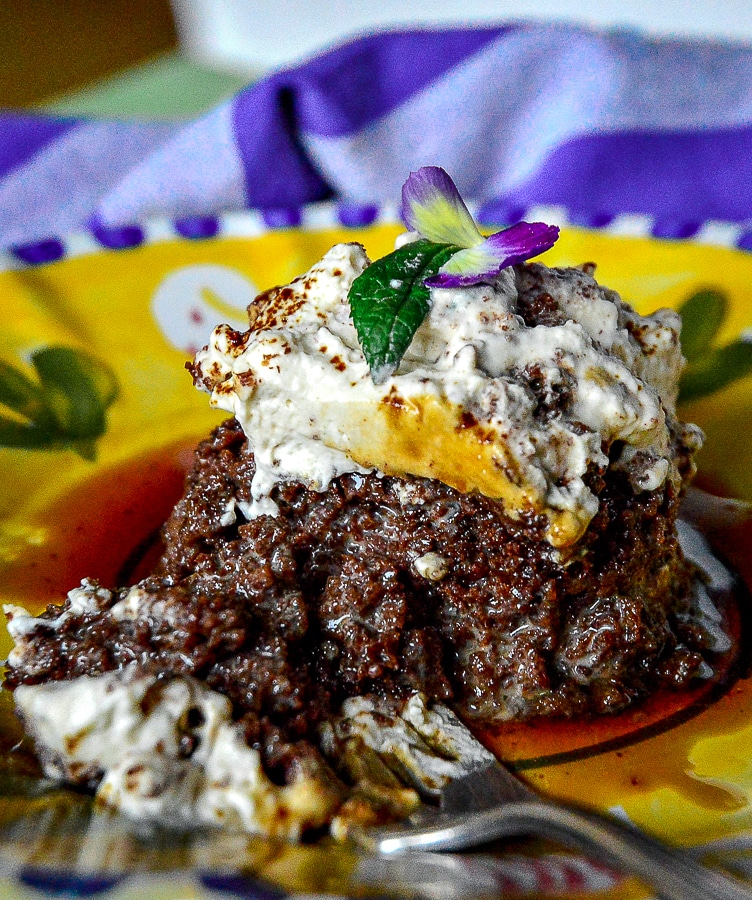 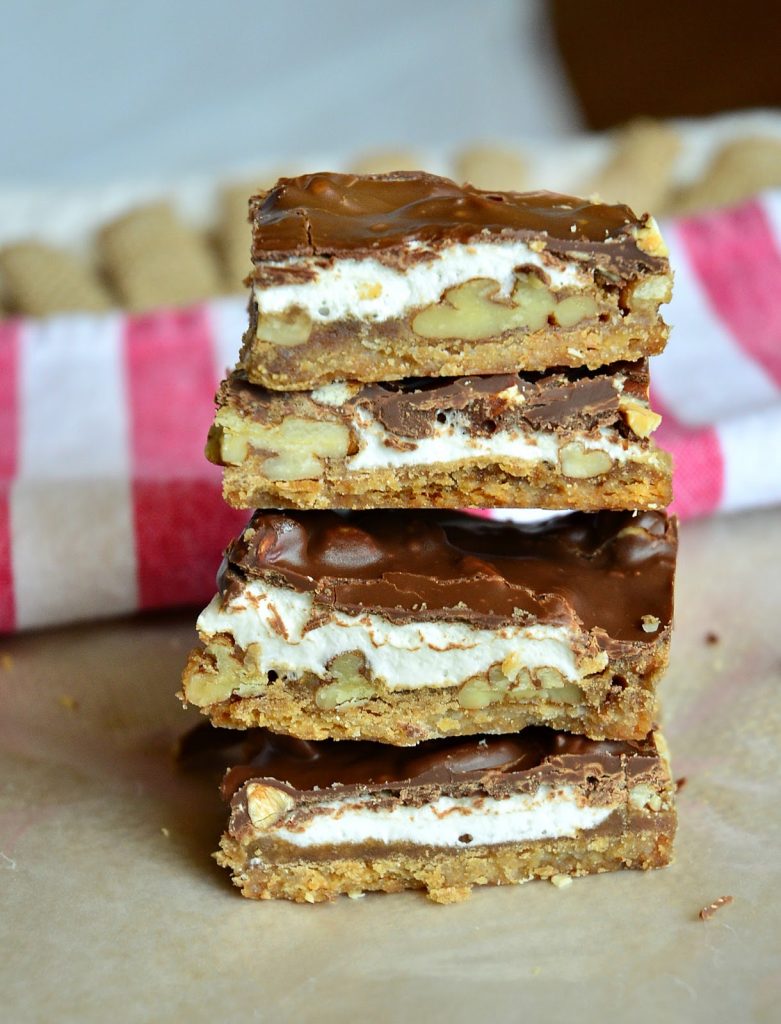 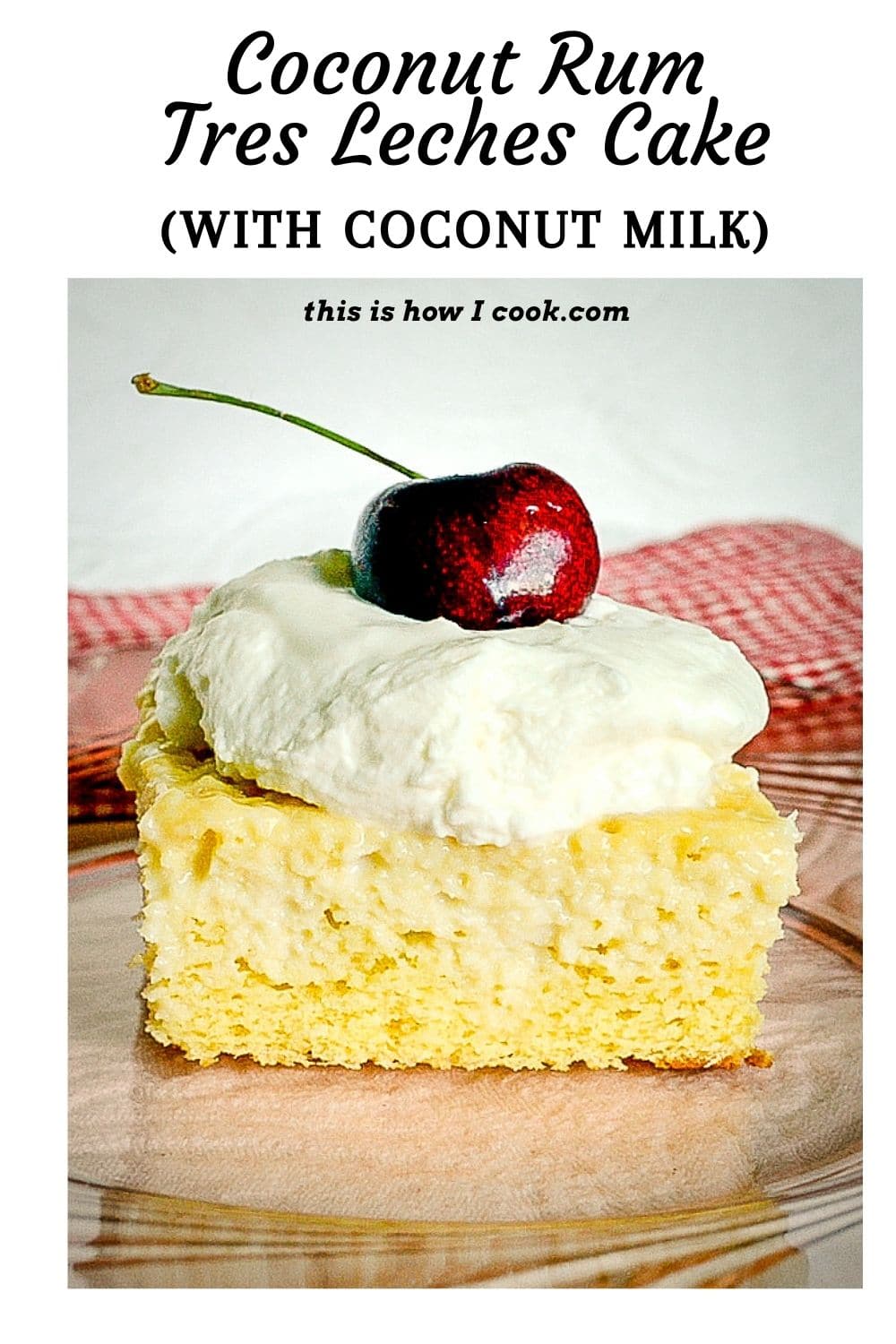 This 3 milk cake is moist and delicious and perfect for any celebration! Flavored with coconut milk and rum, gives this tres leches cake recipe a pina colada flavor!

1 c all purpose flour, aerated with a fork

Preheat oven to 325 with the rack in the middle position. Butter a 9×13 baking dish. Set aside.

Separate eggs. Place whites in mixer and beat on high speed until medium peaks form, about 1 1/2 minutes. Transfer to another bowl.

Place egg yolks in mixing bowl and add sugar. Beat on high, until pale yellow, about 5 minutes. Stir in vanilla.

Using a rubber spatula, stir about 1/3 of the whites into the yolk mixture to lighten it. Then gently fold in the remaining whites. Sprinkle the flour over the egg mixture and gently fold it in, until there are no white flour streaks remaining.

Pour the batter into the pan and bake until the cake is puffed and golden around the edges about 20-25 minutes.

Meanwhile! Place the three milks and the rum in a large bowl and whisk until combined.

Remove cake from oven and place on a cooling rack. Using a toothpick or skewer, poke holes all over the cake and allow to cool for 15 minutes. Poke holes at least every 1/2 inch and poke all the way to the bottom. Pout the milk mixture evenly over the cake and continue cooling about 45 more minutes.

To make frosting:
Toast coconut for topping. Set aside. Beat cream until soft peaks form. Then add rum and powdered sugar. Continue beating until stiff peaks form. Refrigerate until ready to use. When ready to serve cake, frost with whipped cream and sprinkle with toasted coconut. Or just dollop the way we did!

*Times do not reflect time for cake to cool

I'm up to ten people asking me for this recipe. So simple, so yummy and elegant.

I'm so happy Rachel! It is always fun to receive comments from someone that has tried the recipe! I love this cake!

That is definitely one of the most popular desserts in Latin America. I like your version.

Thanks for dropping by.

It is extremely moist and drool worthy. Condensed milk is really a great gift in many recipes, isn't it? Thanks for visiting, Irina!

This looks so incredibly moist that I might start drooling! I love Central American desserts, especially the use of condensed milk.

This looks and sounds really good and rich! I have to add this to my recipe bucket list! :)

Nancy, it took me awhile to try it, but I am really glad I did. It was perfect after a rich, spicy meal!