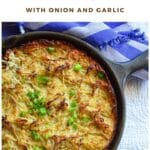 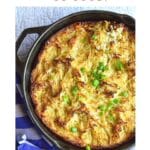 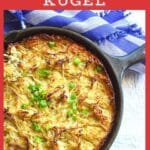 Potato Kugel with its golden crispy exterior and creamy oniony interior, is a classic dish in most Jewish homes. Try it! 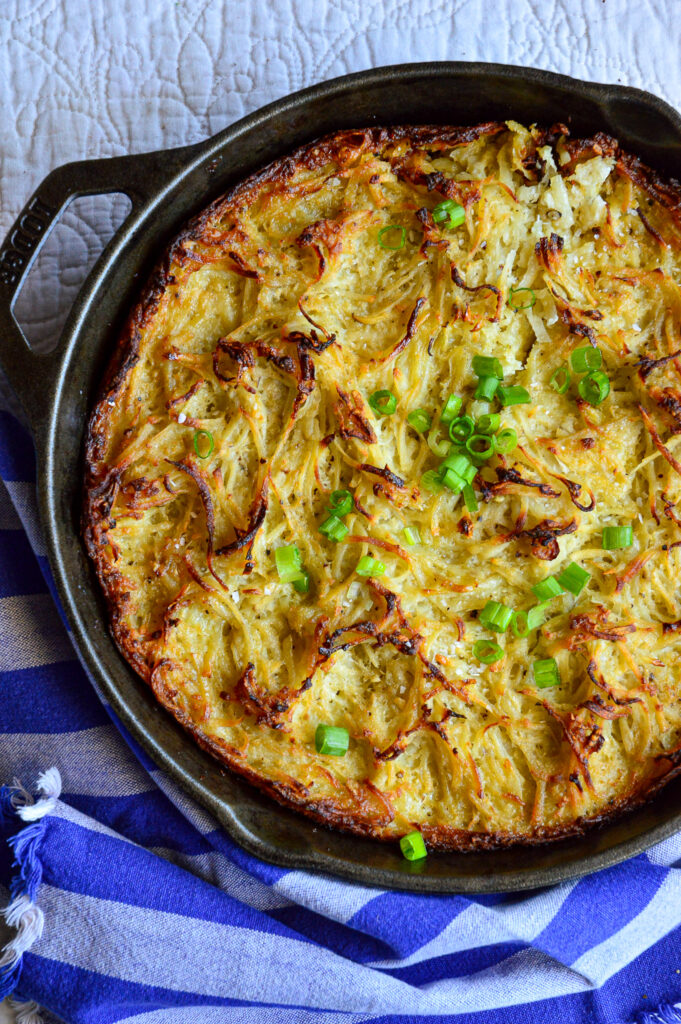 It’s that time of year when potato kugel recipes are on my mind. Being a potato lover, I am always on the lookout for a new version of this classic Jewish dish.

There are many variations in potato kugel land, but the ingredients are almost always the same. Potatoes, eggs and onions. All three are always in my kitchen.

To liven up this year’s recipe I used duck fat, which is kosher. I like the fact that I can find duck fat on my grocer’s shelves, but somehow I can’t find chicken fat unless I go to a specialty market. Some things just can’t be explained.

There are two other potato kugel recipes on TIHIC. One is my Omi’s potato kugel which some might explain as a potatonik. It has no eggs but is still remarkably creamy and amazingly crispy on the outside. 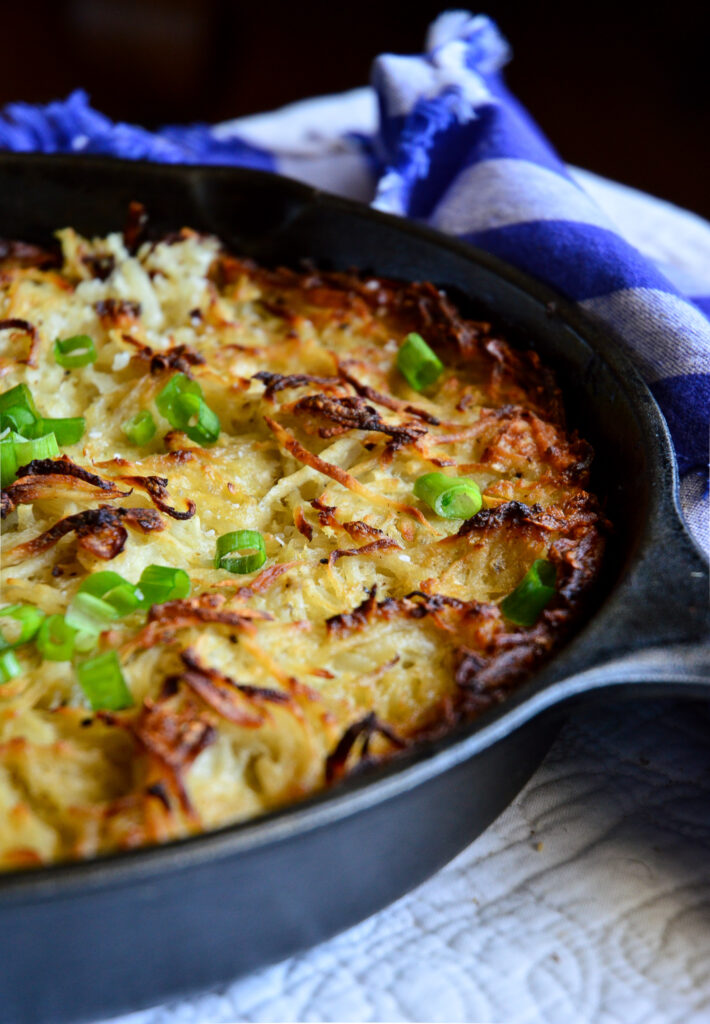 Omi used to flip it from one Dutch oven to the other so even the top became ultra golden. I’ve tried to research this recipe that has water poured over the top of it, but really can’t find much. If you have ever heard of this, I’d love to hear more.

Not feeling potatoes? Well shame on you! I could eat potatoes for every meal. But seriously, kugels are often made with grated zucchini or carrots.

I’ve even seen apple kugels and broccoli stem kugels, so I guess whatever you prefer can be made into a kugel. And then there are noodle kugels, but that’s another post! 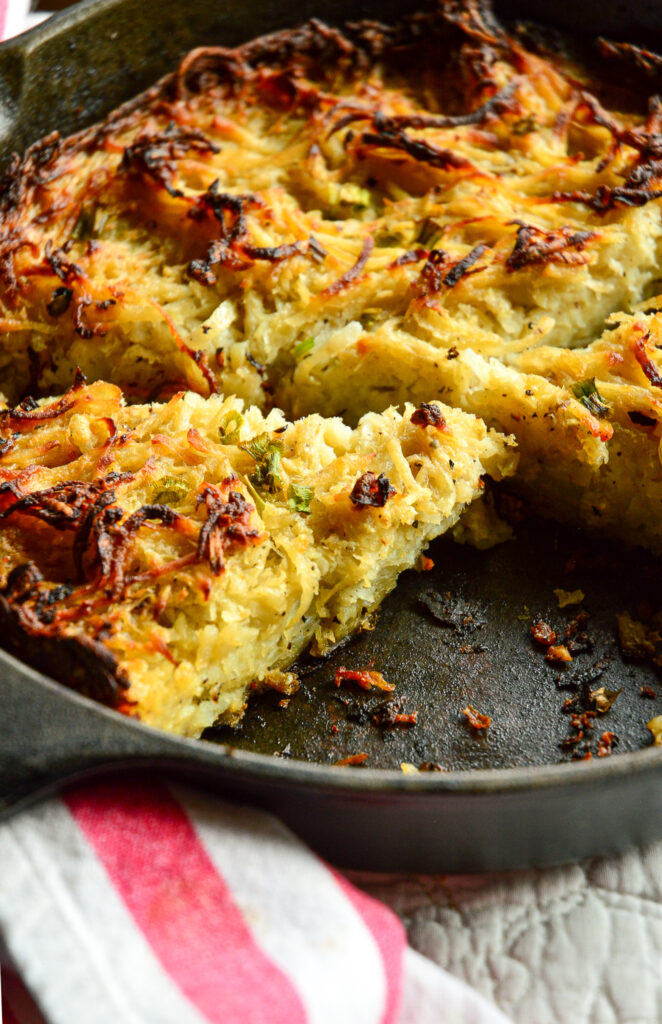 Kugels can be made with sauteed onions if you prefer a milder taste, but I have no problem with raw onion.

Potato kugels often have baking powder added, if it isn’t a Passover kugel. Baking powder helps the potatoes break down and become more creamy while also giving a crispier crust.

This duck fat potato kugel has an added rich flavor due to the duck fat. Chicken fat will do the same.

I also love the fact that is has the right amount of salt and pepper. Too little of both makes a kugel bland. Not sure if you need to add more? Just take a spoonful of your potato mixture and stick it in the microwave for about 20 seconds. One taste will tell you if you need more salt or pepper.

Garlic is not often added to potato kugels, but garlic is one of my favorite ingredients. It’s up to you, but I do love the extra kick it provides. 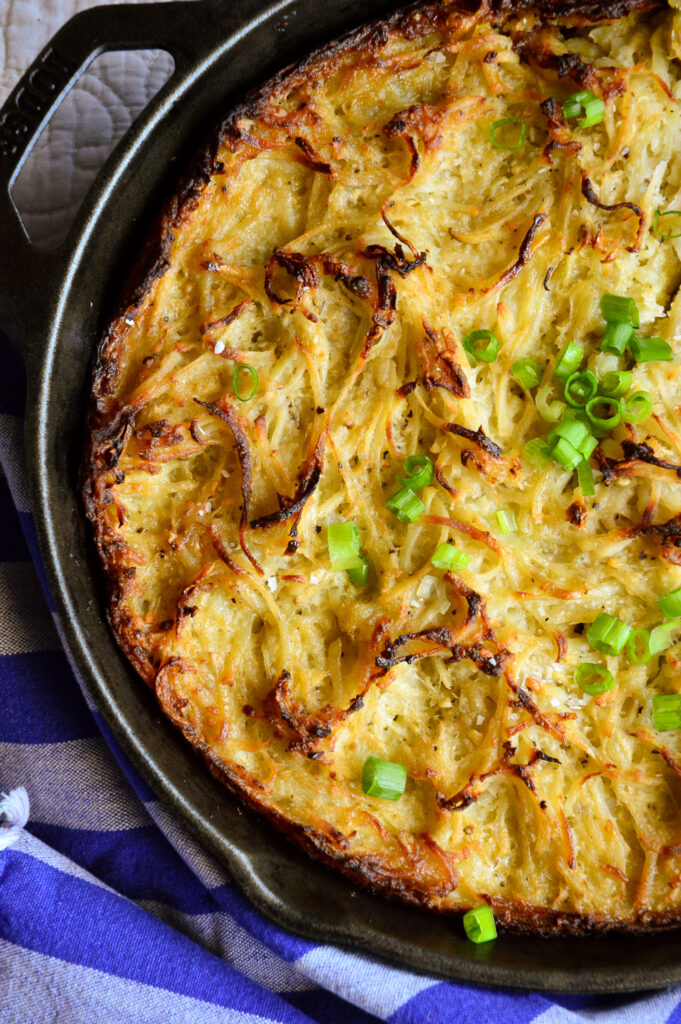 The High holidays will be a bit different, very untraditional event, this year. Our service will be zoomed, which means no celebrating at 10,000 feet.  it appears it will be just the two of us, which is a really strange feeling.

Well, one thing I can count on is that at least my menu will remain traditional. Even if the number of participants eating is way down! 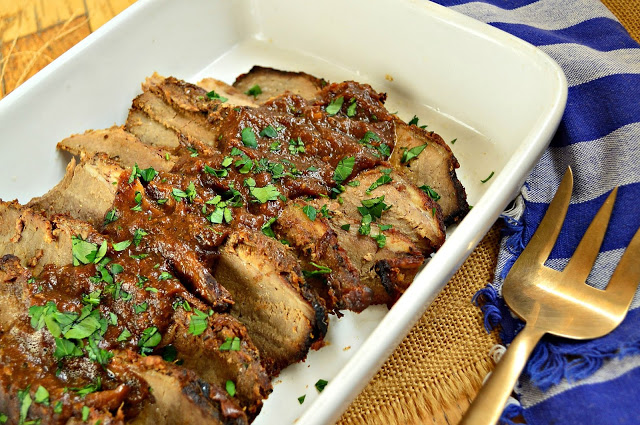 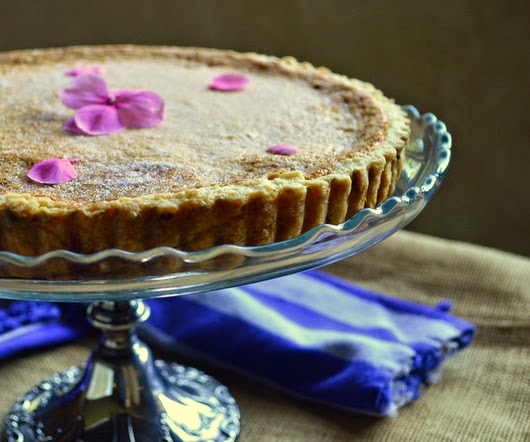 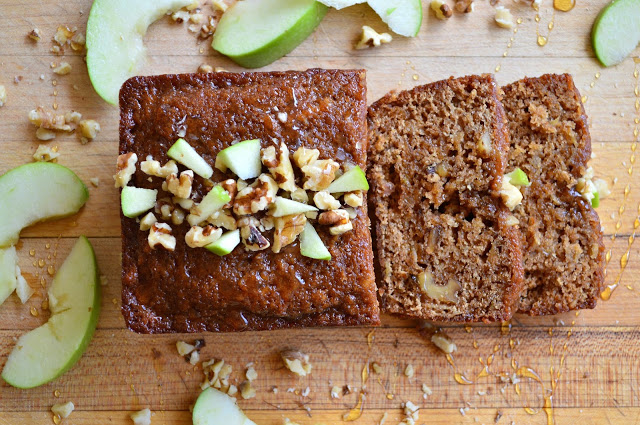 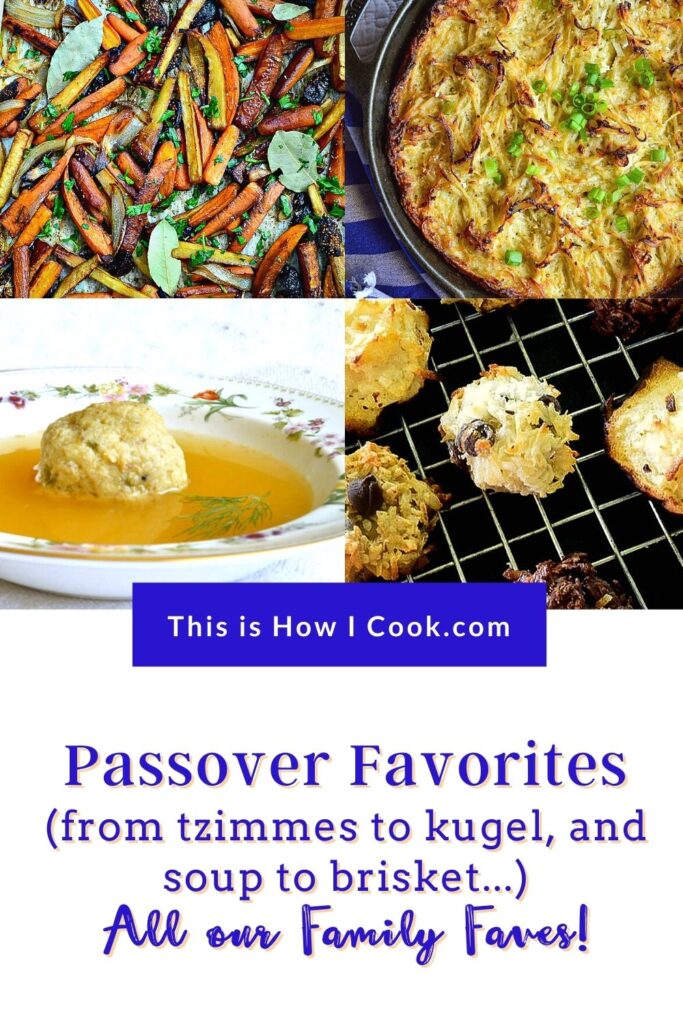 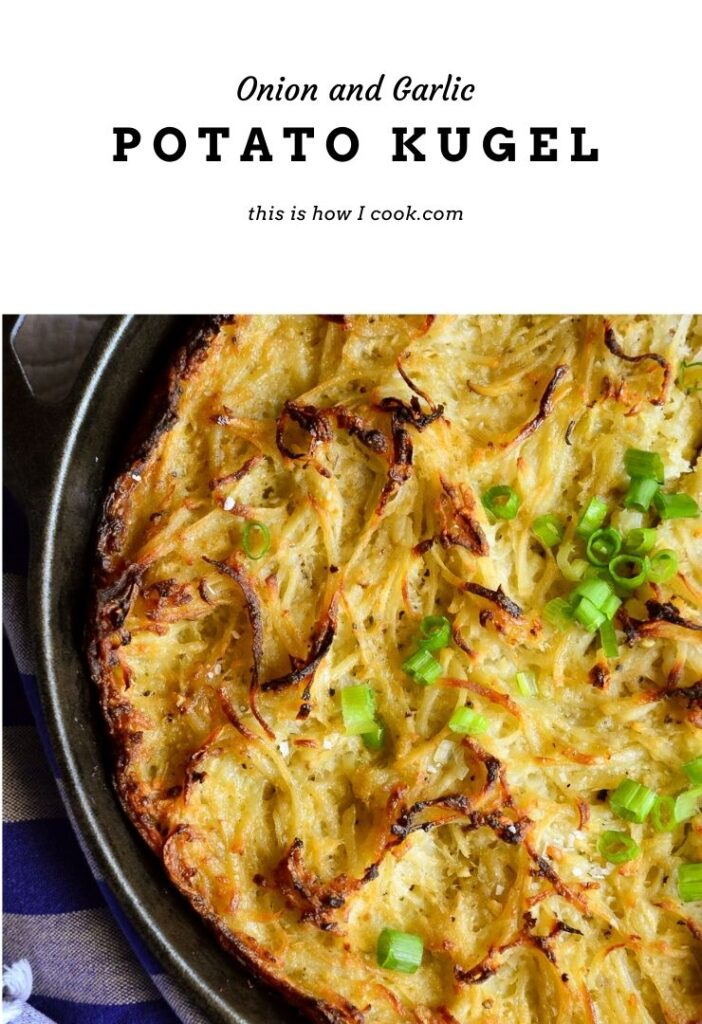 Potato Kugel, with its crispy golden edges and its soft interior, is a Jewish version of potato casserole!

3 lbs or about 5 large baking potatoes (Russets or Idaho), peeled and cut into large pieces that fit the feed tube of the food processor sideways

1/3 c potato starch, cornstarch or matzo meal (They all work)

Potato kugel can be made by hand by grating  the onions finely and coarsely grating the potatoes and mincing the garlic. This is how my Bubbe did it. HOWEVER! I prefer to use a food processor.

In a food processor with regular steel blade, chop onions and garlic until almost finely ground.

Now put in the grating blade. Place potatoes in sideways to get long strands of potato.

Heat 1/4 oil or schmaltz or duck fat in a 10″ cast iron skillet over very high heat until hot. Pour potato-egg mixture into pan carefully because if this is hot the way it should be, it may splatter. Spread evenly in the skillet. Drizzle with last tablespoon of oil.

Bake in a preheates oven for 75 to 80 minutes, until browned on top and tender in the middle. Cover with foil if it browns too fast.

Serve in squares or wedges. This can be served from the skillet or unmolded onto a platter. Kugel reheats well in a warm oven. It keeps in the fridge for days and can be frozen and then defrosted before rewarming in the oven.

No cast iron? Use a casserole baking dish, but just make sure the oil is hot as mentioned above before pouring in the potato mixture. This can be done in the oven, but it may take a bit longer to heat up.

If there are leftovers, I chop the kugel into large pieces and saute them in oil to make really good hash browns.

I tried commenting on some of your other posts and there wasn’t a comment box. This sounds fantastic and I'm so goad I found it in time for Canadian thanksgiving. It’ll make a perfect side.

How could it be that I've never had potato kugel before...it sounds delicious. Adding duck fat to the mix and it is a must try. 😊

well, kugel isn't very common unless you are in a Jewish family. In which case there are lots of opinions on what makes a kugel!

We love it Sherry!But I also happen to be a potato lover!

I love that crisp edge so much! It must be amazing made with duck fat.

In our house I always get the crust pieces! And the duck fat? Just gives this extra flavor!