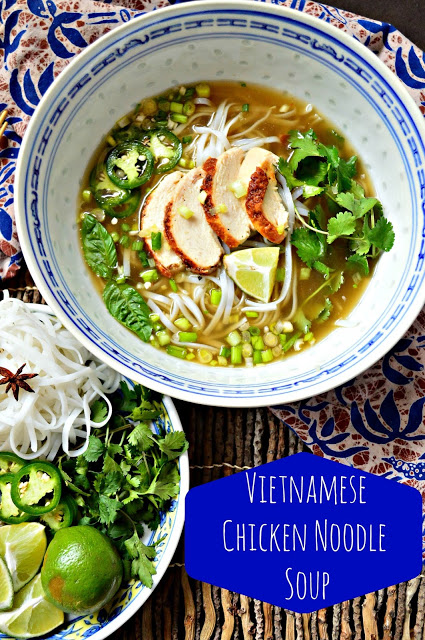 No, I did not disappear into the sunset. 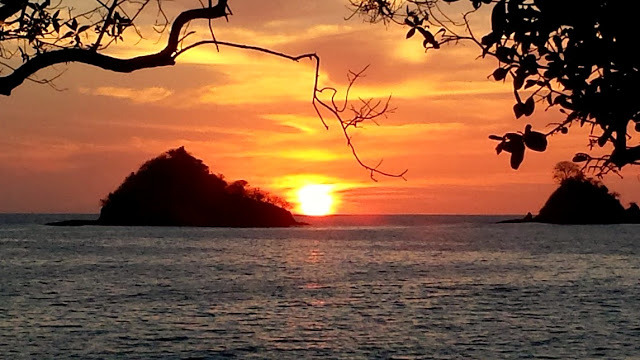 And I promise if I invite you to dinner, that I am a great host. So with the best of intentions I thought that writing this little blog would be easy while China Boy is home. I thought that writing this blog would be easy while off to Costa Rica. I was wrong; I admit it. I was too busy dancing at weddings and watching blue morpho butterflies and gasping at mesmerizing  views filled with lush green mountainsides and the most beautiful cows. I have a thing for beautiful brown eyes. 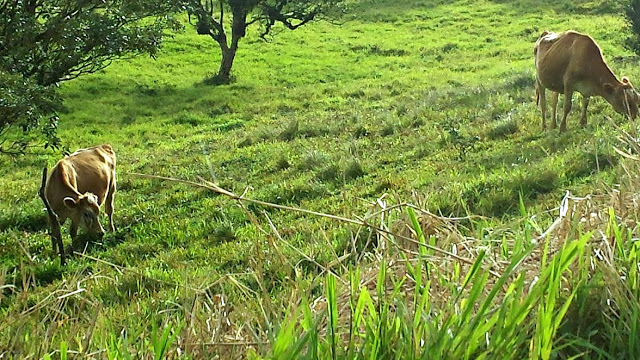 I have a thing for family and treasure the moments we have together. My China Boy came home on the 29th (that was last year…hard to believe!). We celebrated New Year’s with him and friends and had a great meal with some fun new recipes. Thank you Greg, for this great date appetizer and thanks Brooklyn Ragazza for these chicken riggies and I made a good tiramisu too. No photos; just memories.

It was then a busy week before it was off to Costa Rica for a special occasion for a special girl that we’ve known since she was three. You may remember that Zoe and I threw her a shower this past summer. We couldn’t feel closer to this family if we tried, even though we aren’t blood related.Time flies and now little Whitty is MARRIED! 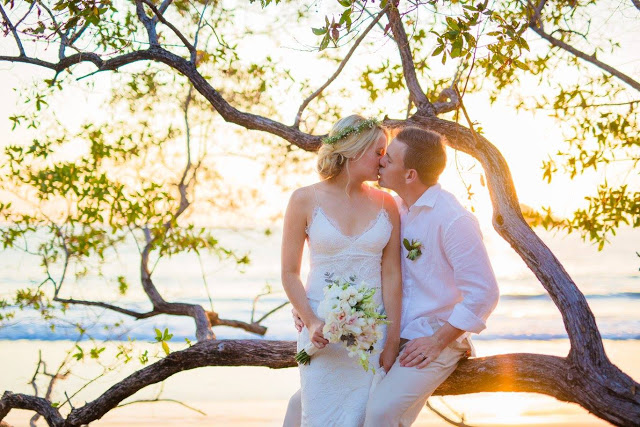 She and Scott had a spectacular wedding in Las Catalinas and we were so happy to be a part of it. Aren’t they the most gorgeous bride and groom you’ve ever seen? 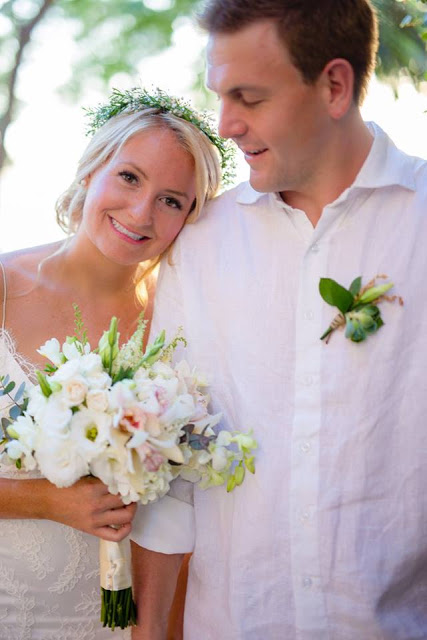 Zoe was in the wedding and we all met up, including Zoe’s boyfriend, for a fun filled 10 days of wedding and seeing Costa Rica. It went way too fast. 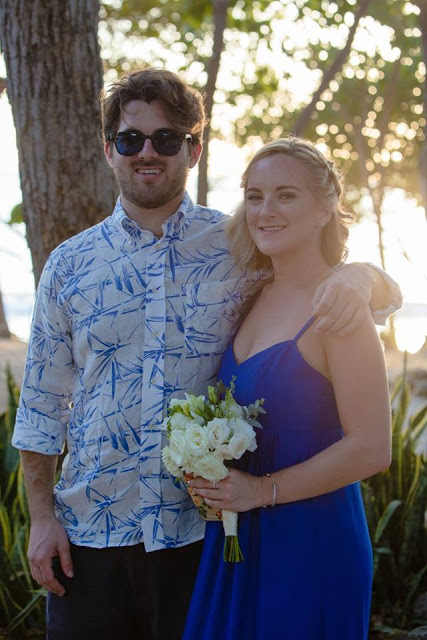 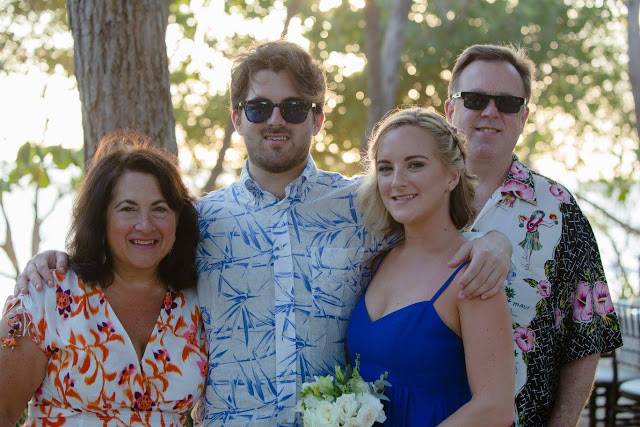 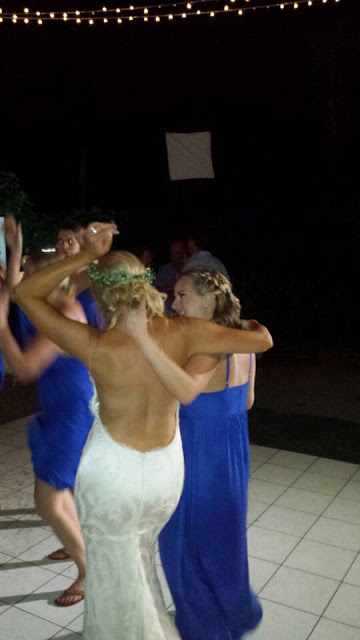 After driving to the spectacular Las Catalinas in an elegant pick up truck- oh yeah-( thank you Priceline and Alamo for that), 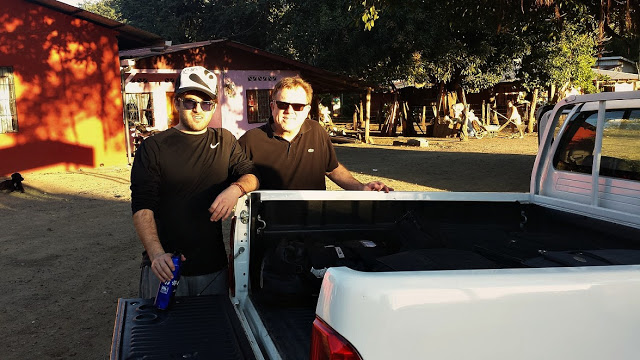 we discovered a totally fabulous community where it is oh so easy to forget your troubles and forget all your cares and go downtown… well, in this case Las Catalinas!. Yes, it did take almost a full day to find a new rental and return said truck, but hey- all trips are an adventure. (If you are going to Costa Rica call Adobe.) They were honest and reputable.

As we relaxed, the kids partied forever. The girls had a bachelorette party on a giant sailboat and the boys went surfing and drinking beer in Tamarindo. I think maybe though… that the girls had more to drink than the boys…. There were night hikes and kayaking and good food and tables set like this 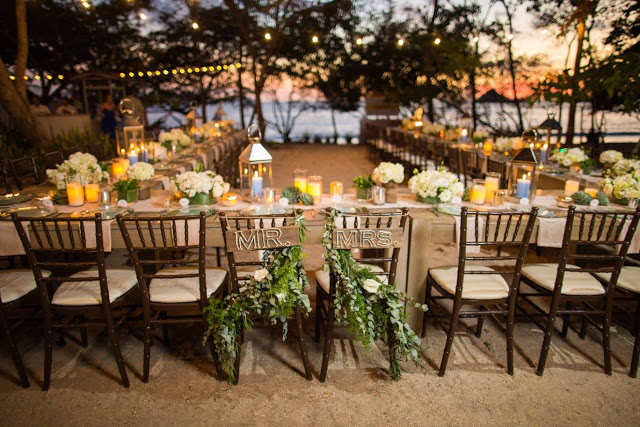 and then there was a gorgeous bride and groom. Oh my. And the sunset. One must not forget the sunsets. 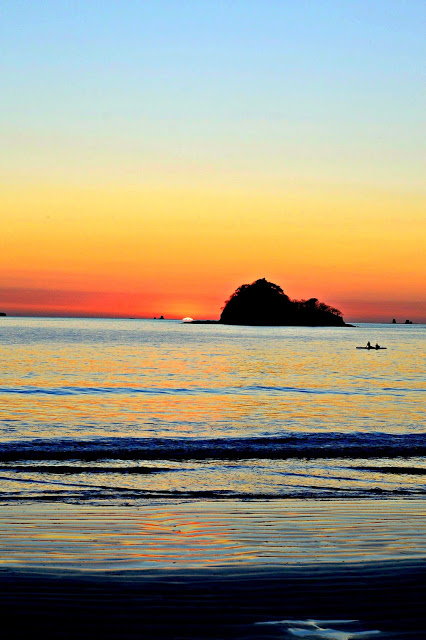 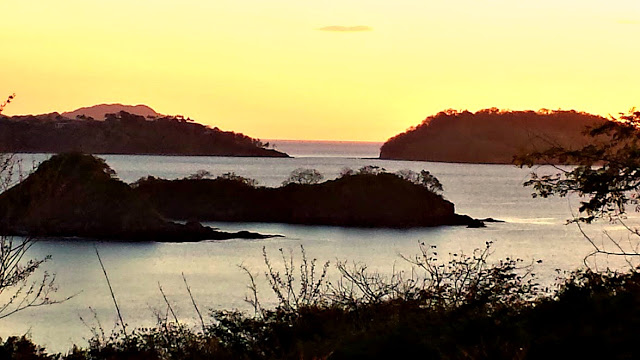 It was also a time for losing glasses. Manservant proceeded to lose his to the waves after partying at the wedding. Three times I told him to take them off, but being a boy who grew up on the Gulf and knows everything about waves, he assured me they were fine – that is until they weren’t. Zoe lost hers to quicksand – as she described it. The kids and Manservant climbed  what is a very hard climb up CerroChato and because it rains a lot in a rain forest, duh! it creates lots of mud. 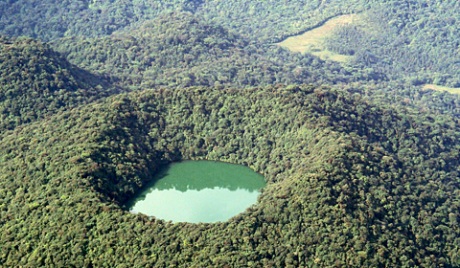 While scrambling out of it, said Ray Bans came off. The third pair of glasses was lost when Geordie ate China Boy’s upon return to Denver. He bit right through the lenses.  Mine are lost to Manservant who discovered that my prescription is very close to his. Which wasn’t a bad thing because otherwise he might not have been able to drive us around Costa Rica’s notorious gravel roads.

After the festivities we traveled up to Arenal, the volcano country, 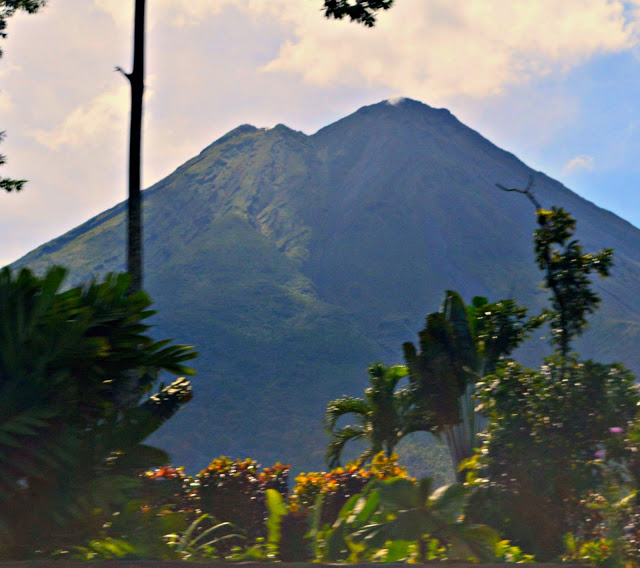 We hiked down to the waterfall and back up again. Some swam. 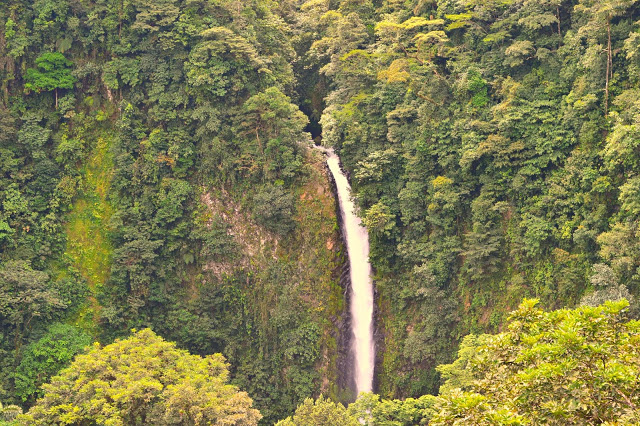 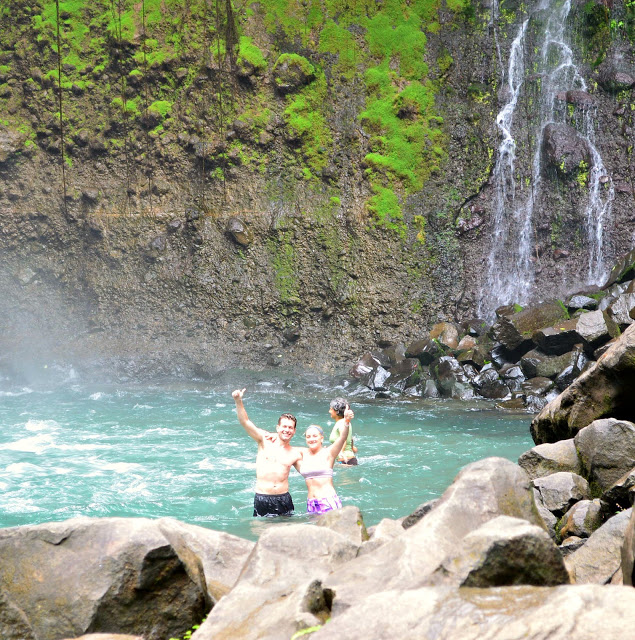 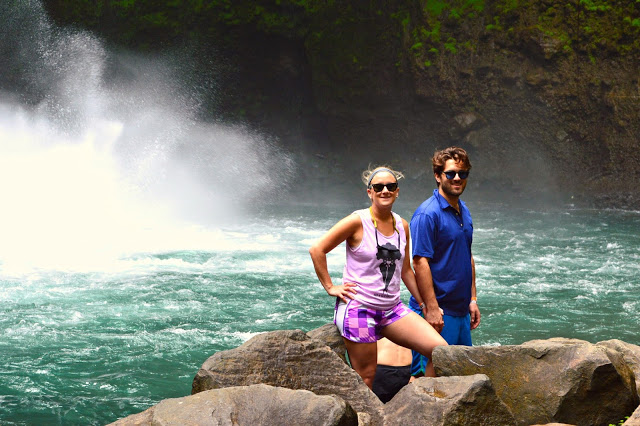 and then it was on to  Monte Verde where the cloud forest is. Costa Rica is a spectacular country with grandiose landscapes. We didn’t get to experience the clouds though, because we had no rain whatsoever. Our views were crystal clear. 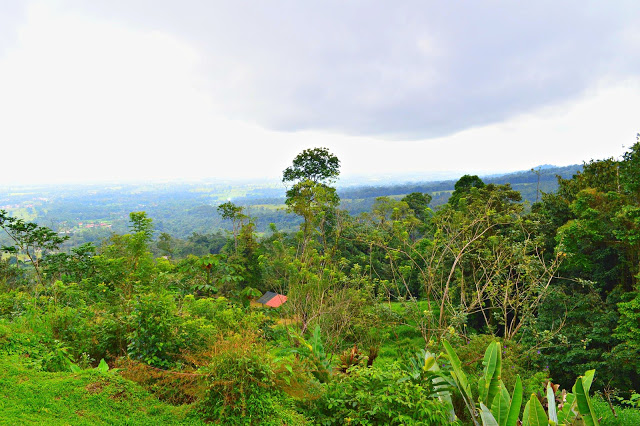 Seeing wildlife was a bit harder because of this, but we still saw macaws and monkeys and butterflies and the elusive quetzal. Luckily we saw no snakes in the jungle, though we did see bullet ants. Watch out for those! I even saw a toucan. Makes me wish I had a new gigantic lens on my camera!

It was a trip. And I mean that. The family got along great with the exception of one car ride where the kids still acted like kids… It was glorious and I can’t wait to do it again. I hope it is sooner rather than later. And I hope the next one will be to China. China Boy, Alex Odie San heads back on Tuesday and I will miss him. I do hope that the next family trip, including Zoe and Evan, will be there to see him.

But this is a blog about food and life and so it is on to the food. Costa Rican food is typical food 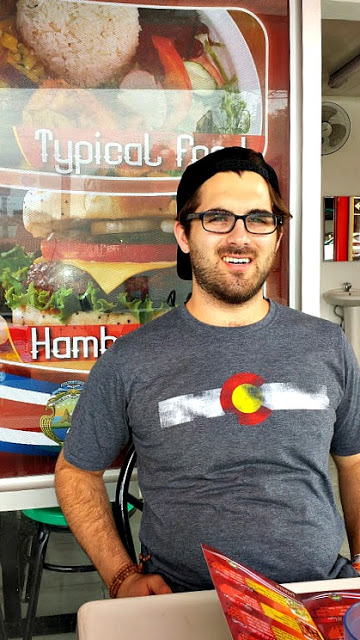 and that is even how they define it! It is simple food. Beans and rice. Some grilled chicken or fish. Ceviche of which we never found one we thought was great, even though we went to the ones that were supposed to be. The papayas and avocados and pineapples were superb. But in our case Costa Rican food was plain and simple. We still feel our best meal, besides the wedding, were the pasteles we bought on the side of the road.

The way back home found us going through Houston so we couldn’t not stop to see my in laws. It was great to see family and cousins that we haven’t seen in a long time and I can’t believe I didn’t get a picture! Shame on me. But I did get a photo of the boys with my in laws and Buckie. Alex insisted we go to Buckie’s. 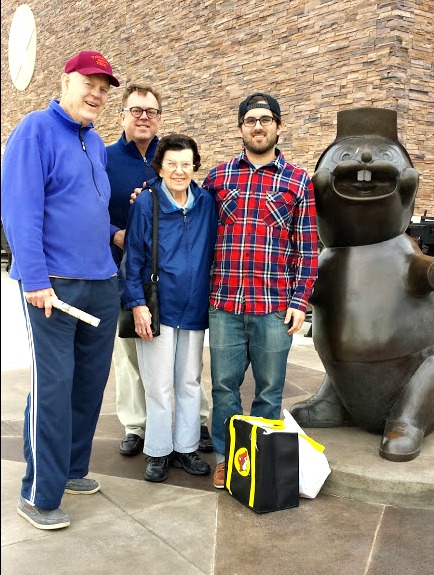 And then we were home. Cold and sunny, but home. The dogs gave us a giant welcome. And as our tummies were worn out, we started the week with something simple. Well, I guess we really started on Sunday after the BIG Bronco’s game with a giant muffaletta. China Boy really misses sandwiches which are hard to get in Shanghai, so we made a big one. And then we were worn out. Our tummies said enough. He headed to Vail and I made chicken soup. Not just any chicken soup. Not my mama’s chicken soup. I made Vietnamese chicken soup. Simple and quick, this one uses a store bought rotisserie chicken. It is full of flavor and perfect for when you have those after the vacation blues.

Vietnamese soups are often served with the broth in a separate bowl. It is up to the eaters to add the condiments of their choice. You will love the addition of 5 spice powder and the star anise. This tastes like a very complex broth, when in actuality, it is  simple to put together. Vietnamese chicken soup or chicken pho just may become your next go to soup. Frankly, I could slurp this every day! 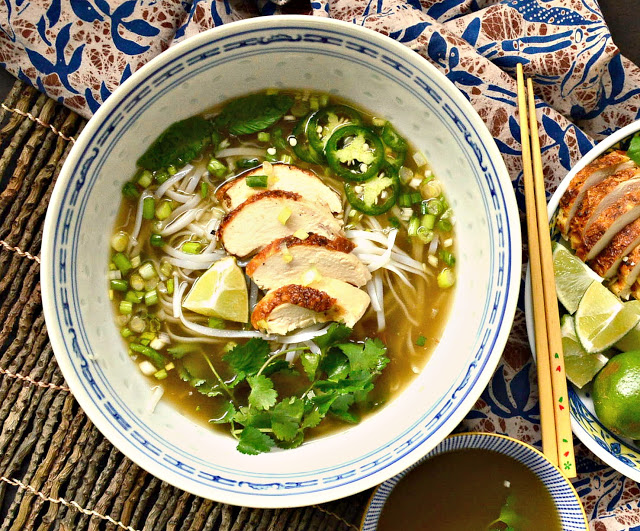 Vietnamese Chicken Noodle Soup or Chicken Pho is easily made with rotisserie chicken. You will be amazed at how good this is and how simple to make!

Limes (a wedge for each bowl to season broth)

In a large stockpot over medium high heat, bring the chicken broth to a boil and add the garlic cloves, star anise, 5 spice, onion and ginger. Reduce heat to low and let simmer for 30 minutes. Pick out and discard onion, ginger and whole spices. Add the sugar, salt, pepper, garlic powder, fish sauce and sugar. Taste and adjust with more salt or sugar if necessary.
To assemble bowls:
Cook noodles according to package directions. Noodles should fill a quarter to one half of the bowl. Arrange the shredded chicken on top of the noodles. Divide the green onions between the 4 bowls. Divide broth between the 4 bowls. Assemble a plate with the rest of the garnishes and have diners add as they like. A fresh squeeze of lime and a fresh grind of pepper is perfect!

Adapted From: The Vietnamese Market Cookbook (Van Tran and Anh Wu) I am loving this one!

More Soups and Vietnamese Dishes for a Winter’s Day: 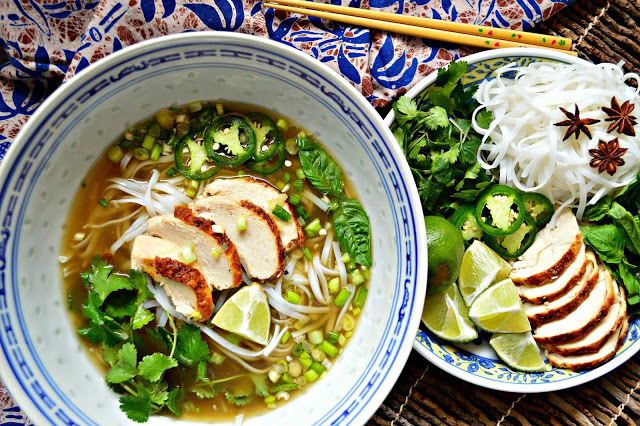 Pin for future use: 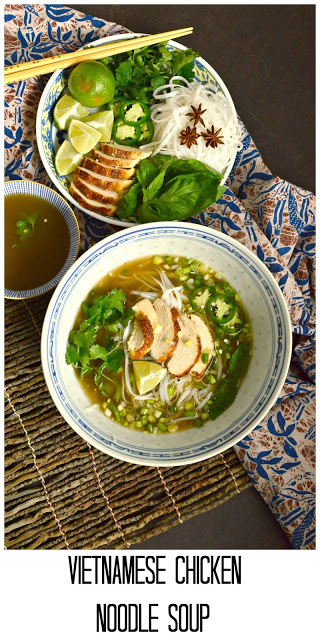 I never thought of using rotisserie chicken in noodle soup. What a great idea! And beautiful wedding pictures!!

Congratulations Abbe! I was just on food gawker and look who's recipe is on the page of most gawked! You go girl! Your photography is just beautiful!!!!

What a beautiful post! I do remember the shower..what a cute couple your DD and her beau..and the bride and groom..you all look so happy and lovely..and that soup..NOW.

Thanks Monique. The one with the beard is my son!

What a beautiful venue for a wedding! There is absolutely nothing wrong with putting the blog on hold while we go off and enjoy ourselves ;) Your soup sounds delicious and full of wonderful flavors!

What an amazing trip!You welcome back soup is terrific too. I'm glad you were inspired by the dates too. Now I'm off to look at all your pics again! GREG

Very good dates! This soup is great, too, but the trip was better!