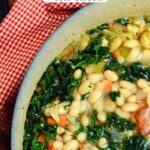 Today’s recipe is for white bean kale soup. Hearty, and soothing, this is a good soup.

It is full of fiber and fiber. And kale. Which is fiber, too.

You could leave it out. Did I mention protein? Lots of that, too. This is good and filling.

And white beans are easy to work with. After a quick boiling water soak of an hour, the soup can then be ready in another hour.

You could  make this without the bacon. But it only has three slices of bacon in the whole pot. I don’t think that’s so bad.

It just doesn’t have French Fries!

Manservant informed me for the third day in a row that he is out of coffee.

He also tells me he doesn’t NEED coffee. I believe that like I believe he’s going to get a job offer any day now.

Every damn channel is covering the cold, except the CNN person who found herself in Miami and is feeling a bit guilty about it. I wish her no ill will!

HOWEVER! There is a guy in Dallas that needs to report for work soon or I swear-I am going to lose it.

I am told that he has been on holiday and will hopefully show up tomorrow. I think he is just a wuss and doesn’t want to go outside, because it is cold in Dallas, too.

I swear, (I’m doing a lot of swearing today) I will fly down there and escort him to his officedom if I can catch a flight.

And if he isn’t on holiday, and this is really related to the weather, than I think he is a doublewuss. It’s just not that cold in Dallas.

You may wonder why I am so busy swearing today… As some of you may know, my Manservant, who is an entrepreneur, has decided that it is time he takes a real job.

Well, he decided that awhile ago, but it has taken over a year to find the job. (He is lucky he is still alive.)

In any case… he has been told that he will be getting an offer any day now. They have already sent the benefits package.

That’s kind of like putting the cart before the horse, I think.

Today he got an email from his friend saying that he is sorry this offer hasn’t arrived but it appears the HR wuss in Dallas (these might not have been his exact words) is still on holiday and said offer has to wait on this guy in HR.

You mean to tell me that in a billion dollar company there is only one guy who can put together the paperwork? Sorry. I am venting… 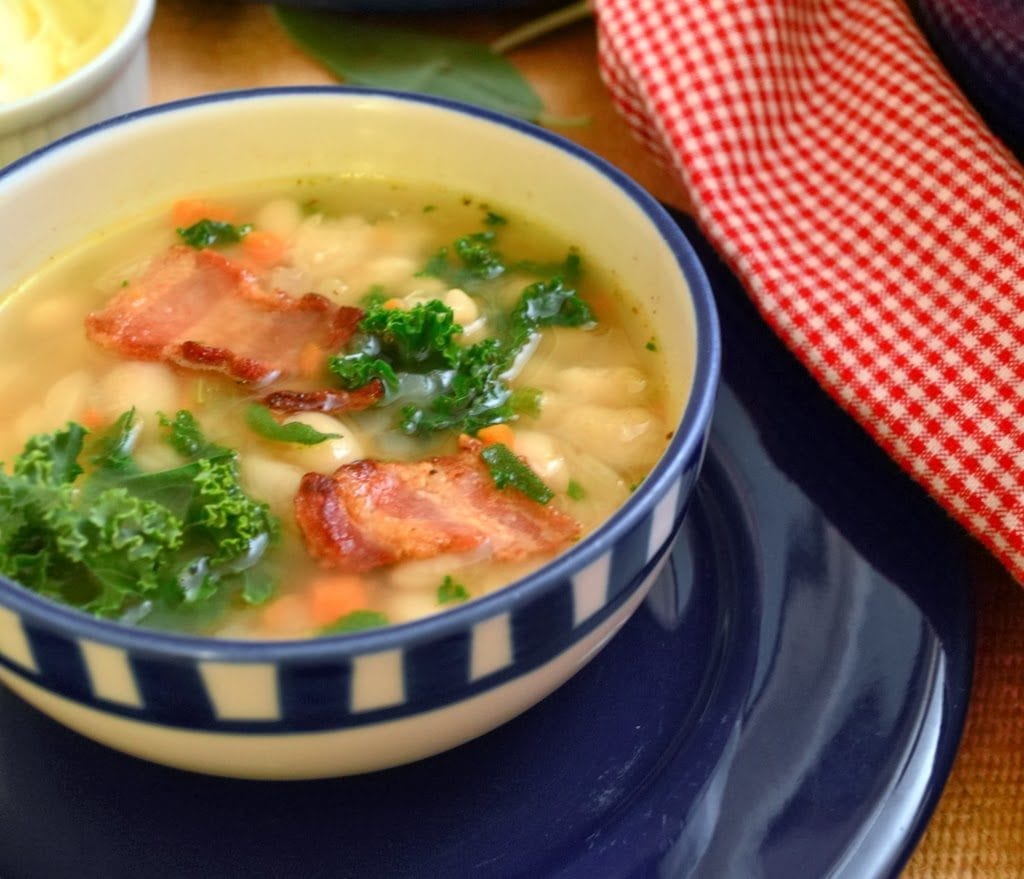 In any case, I am sitting here on a very sunny, cold day wanting French Fries.

I haven’t had French Fries in a very long time.

I make French Fries about once a year and today is not the day.

But I still want French Fries. With Heinz ketchup and salt. I would eat them all and if you took me out to get them I wouldn’t share.

I mean that. I am so not in a sharing mood. But I might give some to that HR wuss if he ever got to his desk.

The good news is that my son lost 10 pounds in the last 6 weeks.

He is working hard at Matsuhisa in Vail. It is a big restaurant and he does a lot of walking.

And during the day he does a lot of skiing. So, if you want to lose weight, my suggestion is to work in a big restaurant as a table runner and ski during the day.

I think if I ate all those French Fries I might have to get a job like his.

However, I think they only hire young, good looking, robust types that don’t eat French Fries.

A few nights ago he met Nobu and Jose Andres. If you are in the food world, this might make your eyes light up.

If you aren’t, forget it. He is doing great and finally, after sleeping on many couches, he was able to move into his just redone rental right on Gore Creek in the Village.  (Score!)

I am  just happy he finally has a bed. He is definitely learning how to get by which will serve him well when he leaves to go to China in the Spring.

I better not think about that now. It might make me want a double order of French Fries. 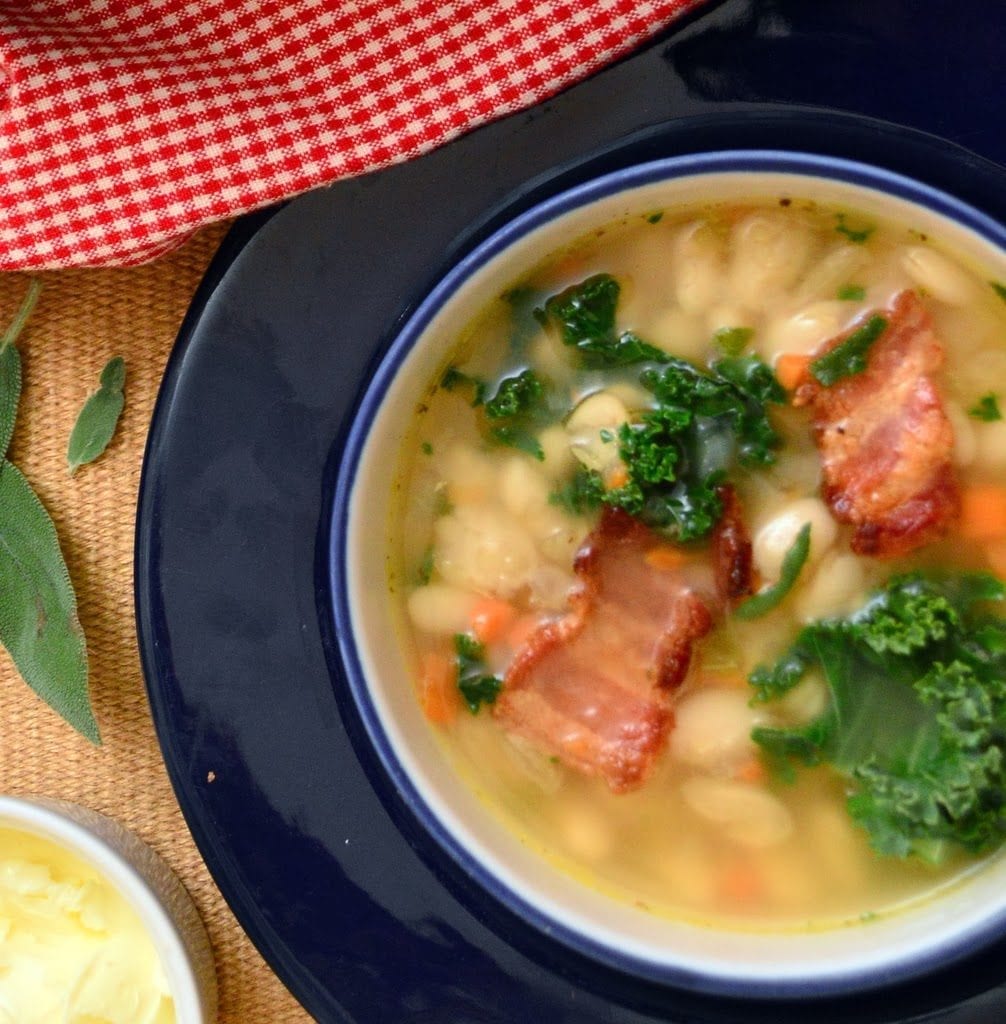 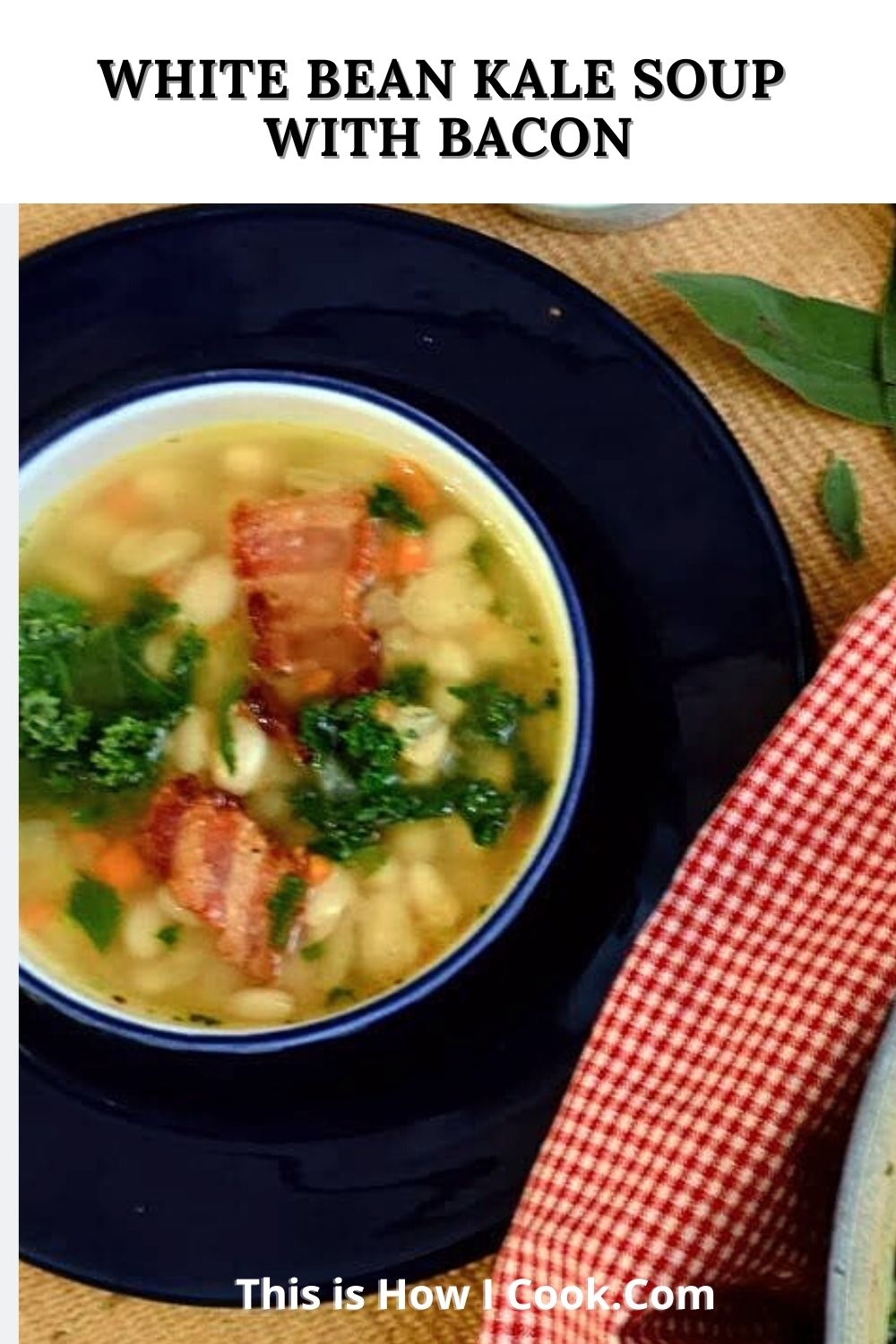 White bean kale soup with bacon is hearty and comforting and pretty good for you. Even if it has a touch of bacon!

Rinse beans and in a big pot cover with 8 c water. Bring to a boil. Cover and remove from heat. Let sit for an hour.

While beans are soaking, chop bacon into big bites. Fry in a big soup pot. (I use my Dutch oven) Remove when good and crisp. Set aside.

Throw in the onion, carrots and celery. Saute until soft. Add parsley and garlic and cook for about one minute. Set aside until beans are ready.

After beans have soaked, throw away soaking water and add beans to Dutch oven.

Add dried sage, bay leaf and chicken broth. Bring to a boil. Turn down to a low simmer and keep lid on, but slightly ajar and cook for 45 minutes to an hour or until beans are as soft as you’d like them.

(If you want, you can puree some of them with an immersion blender. I like them just the way they are, but this is one way to get a creamier soup.)

Add kale and fresh sage about 5 minutes before serving. Garnish with bacon when ready to serve. Serve with French Fries. I mean, bread and butter!

This is such a wonderful and delicious looking soup!!Perfect for the weather here.I will just omit the bacon (it's forbidden for us)

Thanks Anna and Liz. Crazy, huh? It should be a good year and I'm glad I made you laugh!

This soup sounds amazing and so comforting! I'm sorry for the trouble you are having with the job offer. These companies can all be a pain, but it will work out. And your son's job sounds so cool! Oh, and we all crave French fries sometimes. Make a batch and enjoy!

Laura, life can be a lot of trouble but it beats the alternative! Thanks for your optimism! My son has had a lot of cool jobs-but they are all work. Thank goodness he is good at that!

HI Abbe! I love this soup! Its all we have been making these past few days. And, yours has kale, white beans, and oh that bacon has to be the stellar in the soup - I just know it! Your story about HR is funny and I agree with you, only one guy? Hope your hubby hears something soon. And, your son is having a blast in Vail!