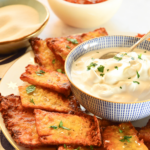 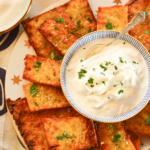 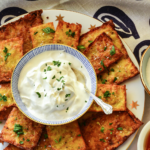 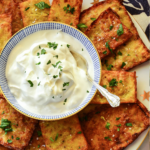 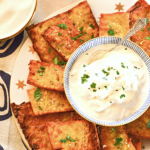 Sheet pan latkes are a great way to make latkes. Yes, they are baked and then fried, but so much less mess, IMO!

And hey, need ideas on what to serve with latkes? Please read on! 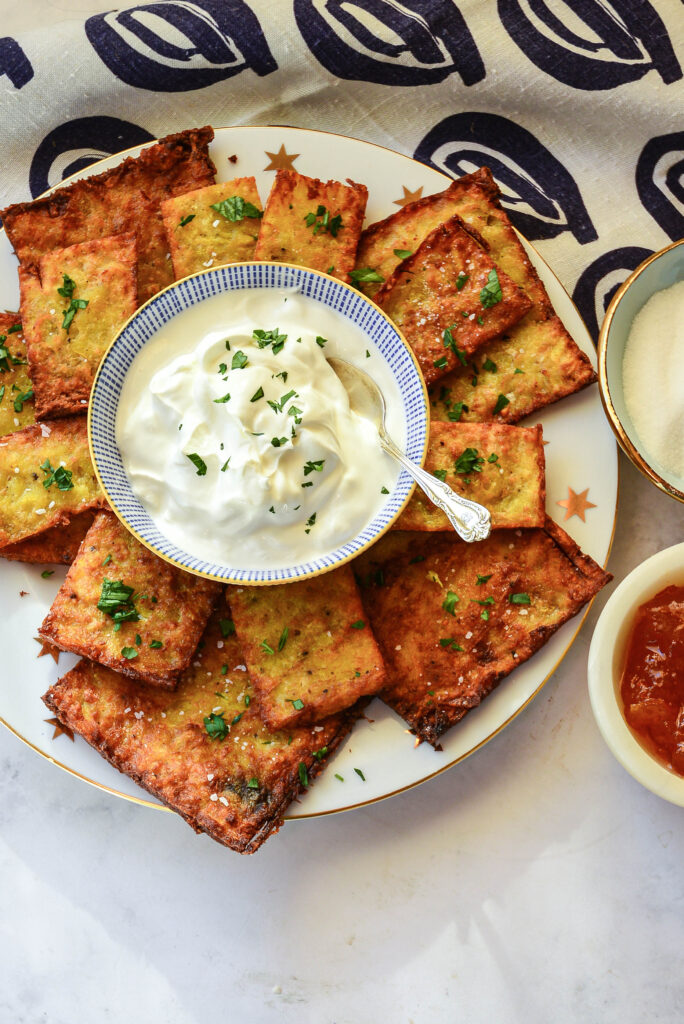 Tonight begins the festival of lights; the Jewish holiday of Hanukkah.

It truly is a minor holiday, but because of Christmas gets pretty hyped up.

Honestly, it is a fun time and I love lighting colorful candles in my menorah collection every night.

As a child, my mom would bring out her electric frying pan and the house quickly began to smell like McDonald’s!

But no one cared because that meant lots of latkes would soon be satisfying our taste buds!

(And this was also not the time of scented candles, which I strongly suggest burning if you don’t want your home to smell like a fast food restaurant!)

All my life I have been serving round latkes. Whoever thought they could be any shape or size, for that matter?

It was with great anticipation that I made these simple sheet pan latkes that I spied on The Nosher site.

Yes, they still need to be fried, but after baking them and letting them cool, it is a very simple and quick process when you get to the fry part.

Instead of beginning with my food processor, I decided since I didn’t need many potatoes, to use a box grater.

Plus, this way I didn’t have to wash the bowl! 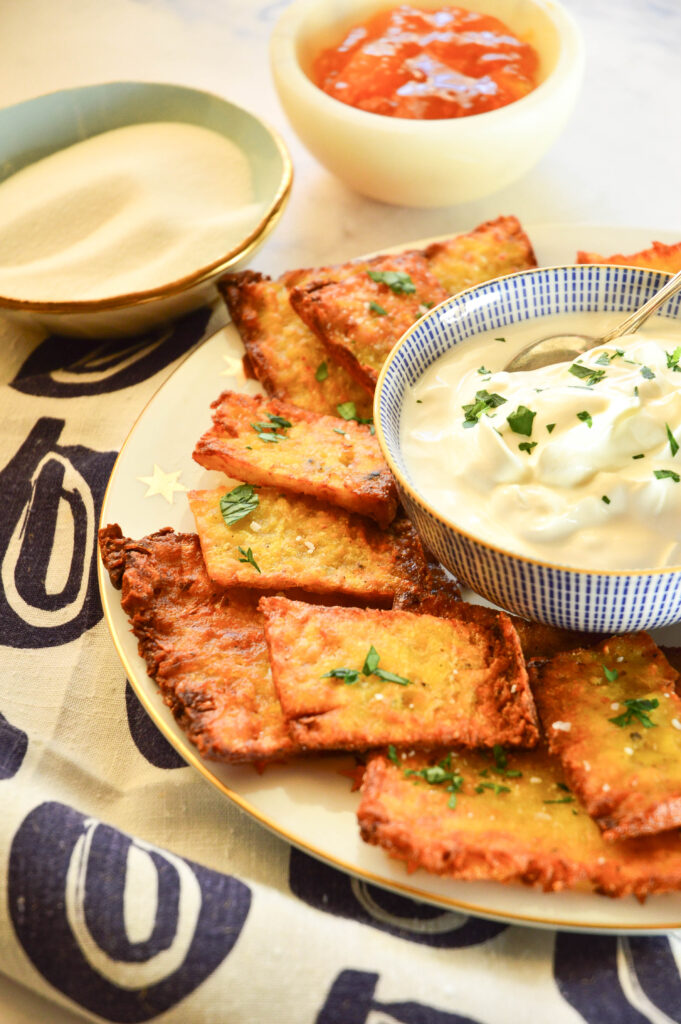 How To Make Sheet Pan Latkes:

I used Yukon golds, but russets would also work, to make these crispy potato pancakes.

I coarsely grated the onion and potatoes and placed them into a large strainer and ran cold water over them.

Then I dumped them into a clean kitchen towel and wrung out all the water.

And repeat! Dump back into the towel and squeeze as much liquid as you can, one more time.

This is a bit different than a traditional latke recipe and I am guessing it is because these are baked before they are fried.

Place the potato onion mixture in a large bowl and add the 1 t vinegar, matzo meal and eggs.

Combine the mixture well and stir in the potato starch.

Normally, the potato starch is the white stuff left in the bottom of the bowl, but in this case because of the rinsing it needs to be added back.

No matzo meal? Use flour. 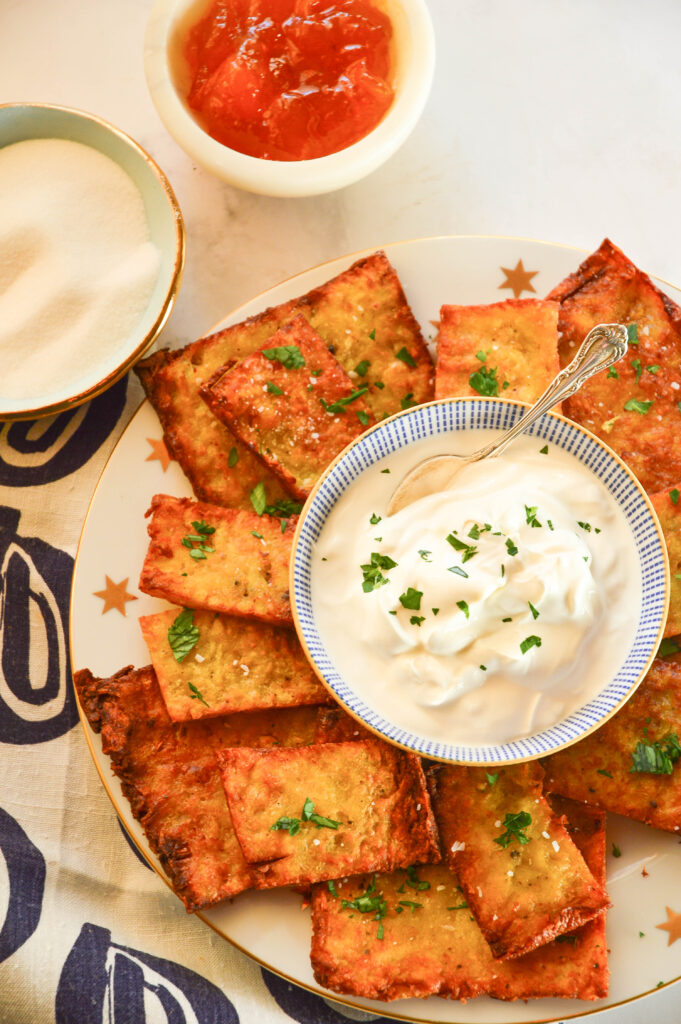 Preheat oven to 350 degrees. Take the potato mixture and spread it in a thin layer on your well greased baking sheet pan.

If you want a thicker latke with a softer interior I would recommend using a 13 x 9 pan, which is what I intend to try later this week.

Bake the mixture for 20 minutes. The shredded potato mixture will still be white in color.

Cool and then cut the latkes into squares, strips or rectangles.

Squares are almost like crackers, except way better, and can be topped with just about anything.

If you cut them into strips, they become latke fries and who can think of anything better than that?

Now it’s time to heat more olive oil or canola oil and fry in a cast iron skillet or a nonstick skillet, over medium-high heat.

Make sure it’s hot oil-about 350 degrees- and that there is enough oil in the skillet to cover the potato pancakes.

Yes, I did fry mine in a mixture of duck fat and olive oil for extra flavor.

Fry, turning once when the edges of the latkes turn slightly golden, about 2 minutes per side.

Don’t forget to sprinkle with salt while they are still warm! 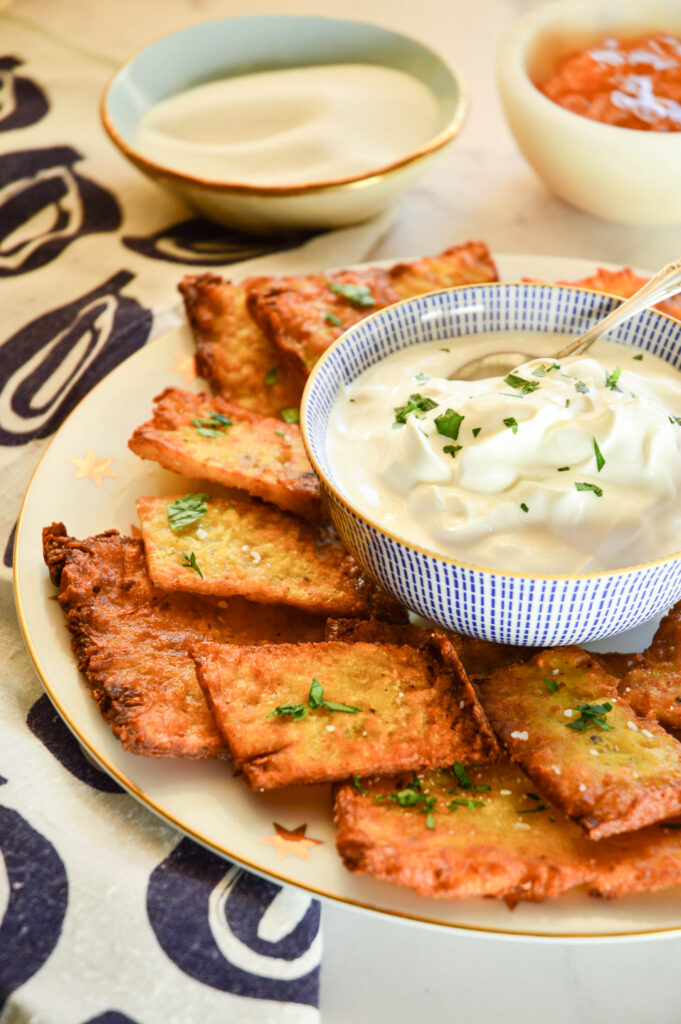 What to serve latkes with?

Latkes are often considered a side dish, but with the right accompaniments can quickly become the main course.

These giant hash browns would be great with lox and a soft cream cheese spread.

Then add a dollop of caviar for extreme elegance!

And you could make your own gravlax!

Or serve these with traditional Hanukkah foods.

Make a meal of fried chicken and donuts-whether jelly doughnuts or simple glazed.

I often make a brisket for the main course and serve crispy latkes as one of my side dishes.

Don’t feel like beef? I have plenty of roast chicken dishes on TIHIC, and this new pomegranate chicken would make a great main dish to go with this comfort food.

Latkes, which originated in Eastern Europe can be topped with a fried egg. or a perfect poached egg.

Throw on some corned beef or pastrami and make a Hanukkah breakfast sandwich. 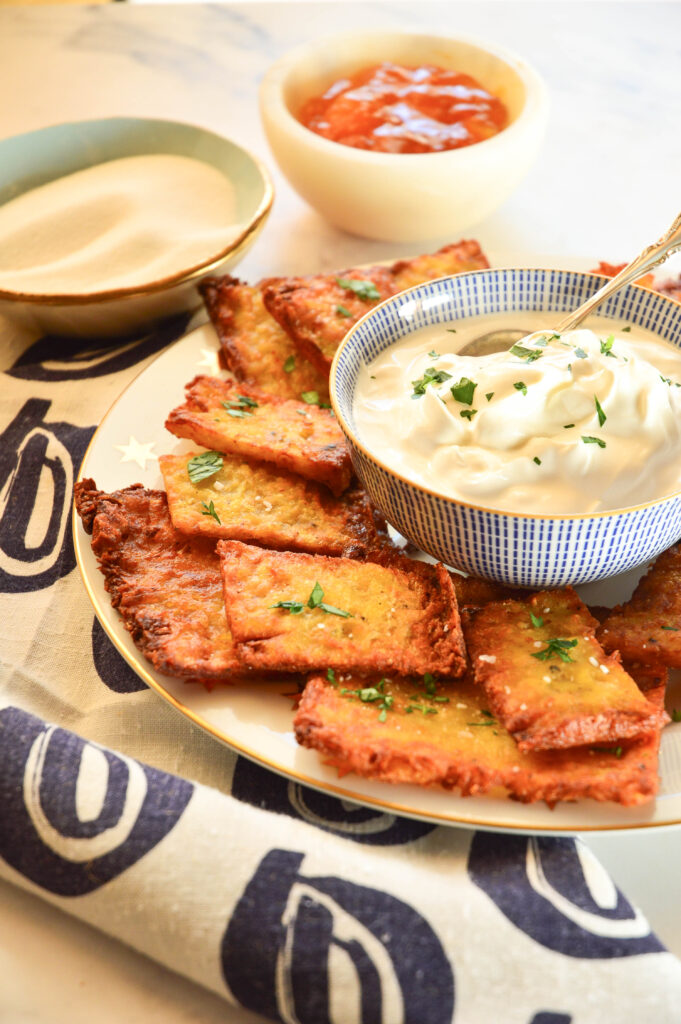 Having a latke party? Remember latkes do not do well sitting on a buffet, so plan to eat them fast.

Serve a latke board with the traditional toppings of jam, sour cream and in my house a light sprinkle of sugar.

Somehow the sugar-just a tiny bit-brings out the salty latkes flavor!

Don’t forget the apple sauce. In my house it is always homemade.

This smoked trout pate would also make a great topping.

I have lots of latke recipes from sweet potatoes to one using chickpeas so make sure to check them out.

With eight days of Hanukkah one can have a Hanukkah celebration every night!

This most traditional side dish can be eaten every night! And no one seems to mind!

So here’s wishing you lots of chocolate Hanukkah gelt and a whole lot of sheet pan latkes! 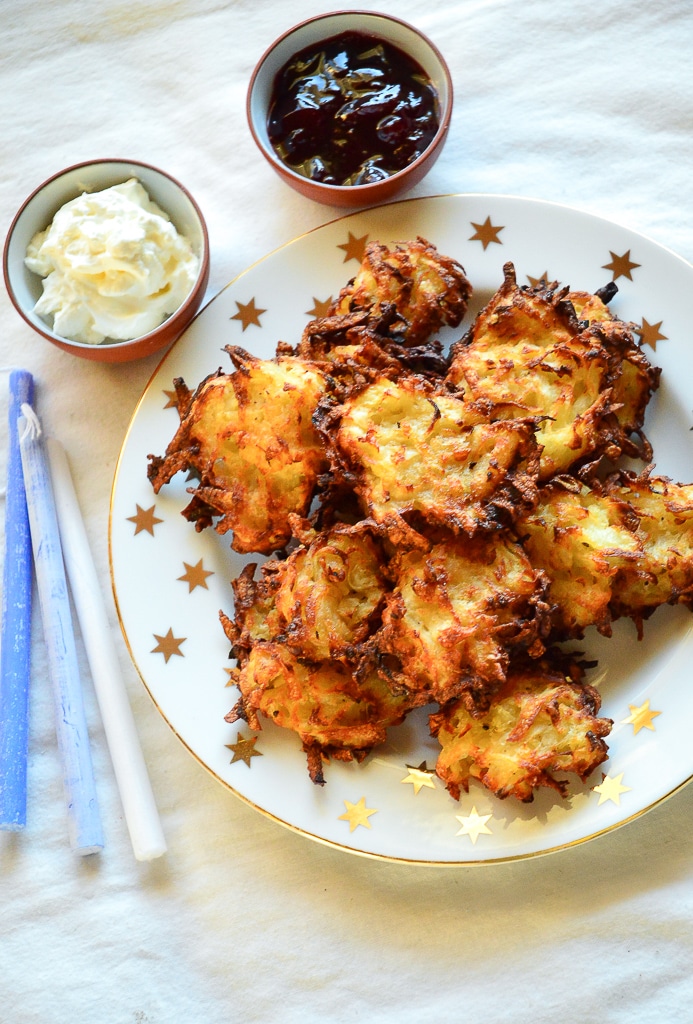 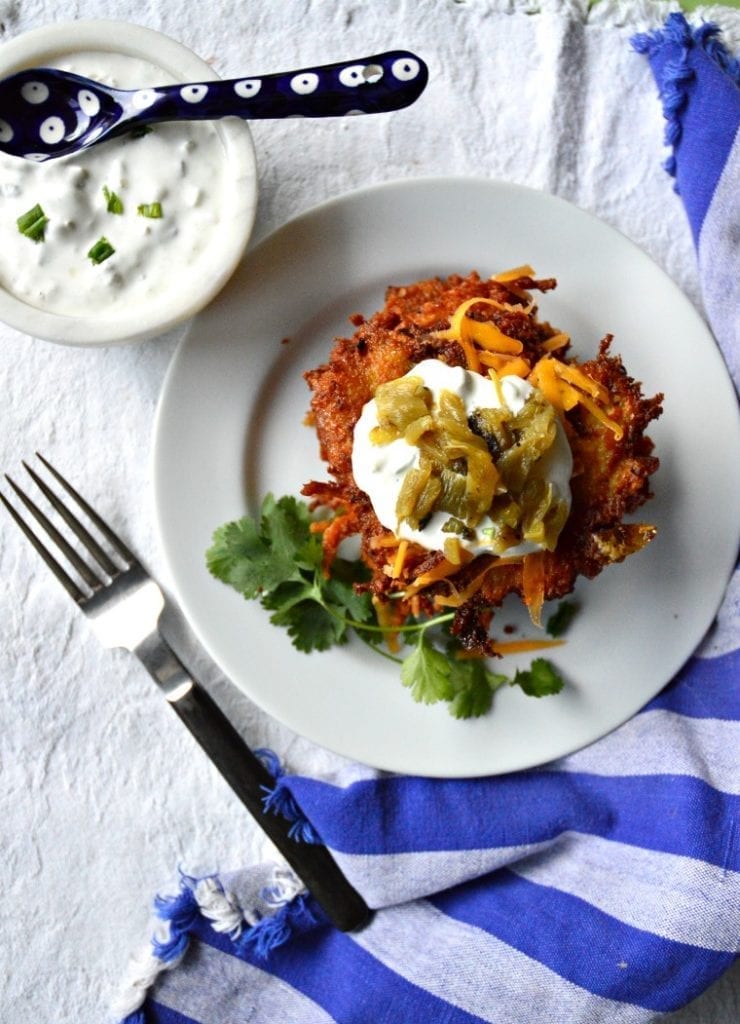 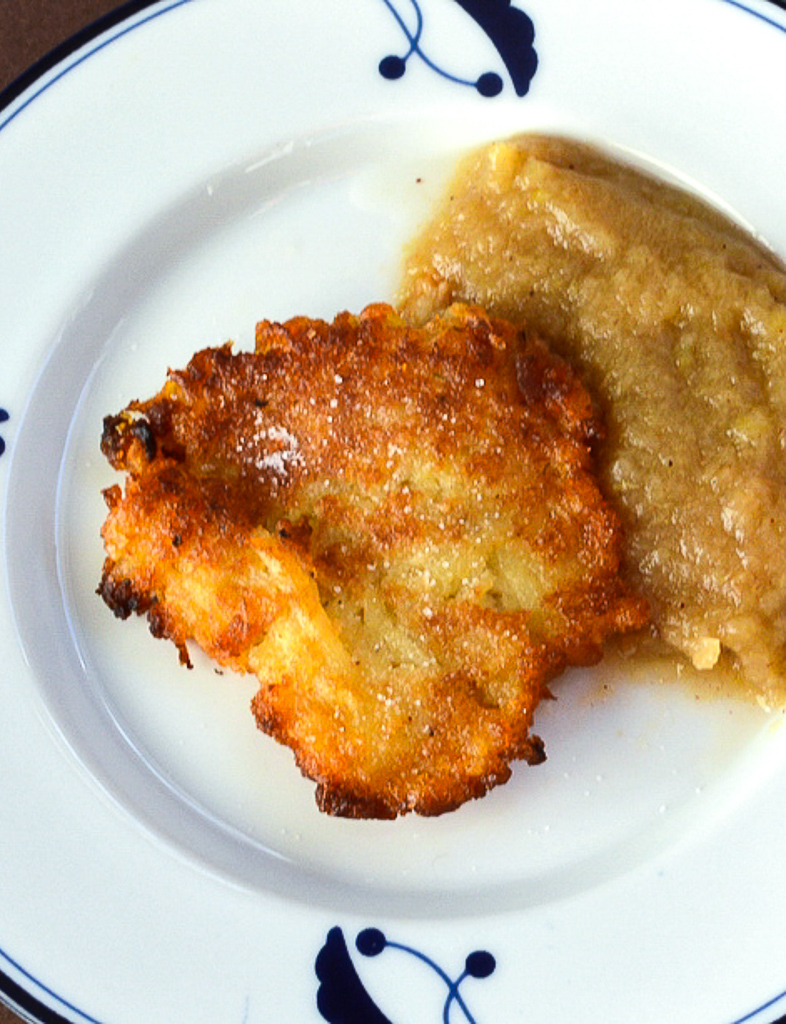 Sheet pan latkes are a lifesaver. Plus they are really, really good!

Oil such as olive oil, canola oil or duck fat or schmaltz for frying

Using a box grater, grate the potatoes and onion and place in a strainer and rinse with cold water.  Transfer to a bowl lined with cheesecloth or a thin dish towel. Wring out the liquid from the potatoes. Do this again and squeeze again and then transfer to a large bowl.

To the bowl with the potatoes and onion, add the vinegar, matzo meal, salt and eggs. Mix well, then add the potato starch and mix again.

On a very well greased sheet pan, take the potato mixture and spread into a thin, even layer. I used a 10″ by 15″ pan to get really thin latkes, but if you want them thicker, try a 13 x 9″ pan.

Bake for 20 minutes. The potatoes will still be white. If you are using a smaller pan, I would bake for 5 minutes longer.

Take mixture out and allow to cool for about 20 minutes. Cut into the sizes you want.

Heat enough oil-about 1/4″ in a cast iron or nonstick skillet. Add the latkes to the hot oil and panfry until golden brown, flipping once after about 2 to 3 minute. Sprinkle with salt while still hot.

Drain on paper towels and serve!

I kept my baked potato sheet in the refrigerator for several days before cutting and frying. Bring to room temperature before frying.

Beautiful appetizer Abbe! I wish you have happy holidays!

No kidding! These would make a wonderful appetizer, with all kinds of dips! What a great idea.