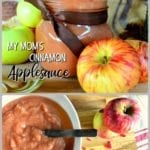 My Mom’s Cinnamon Applesauce is made with apples and cinnamon red hots. OK, this isn’t for the purists, but my mom’s cinnamon applesauce keeps the kids returning home! 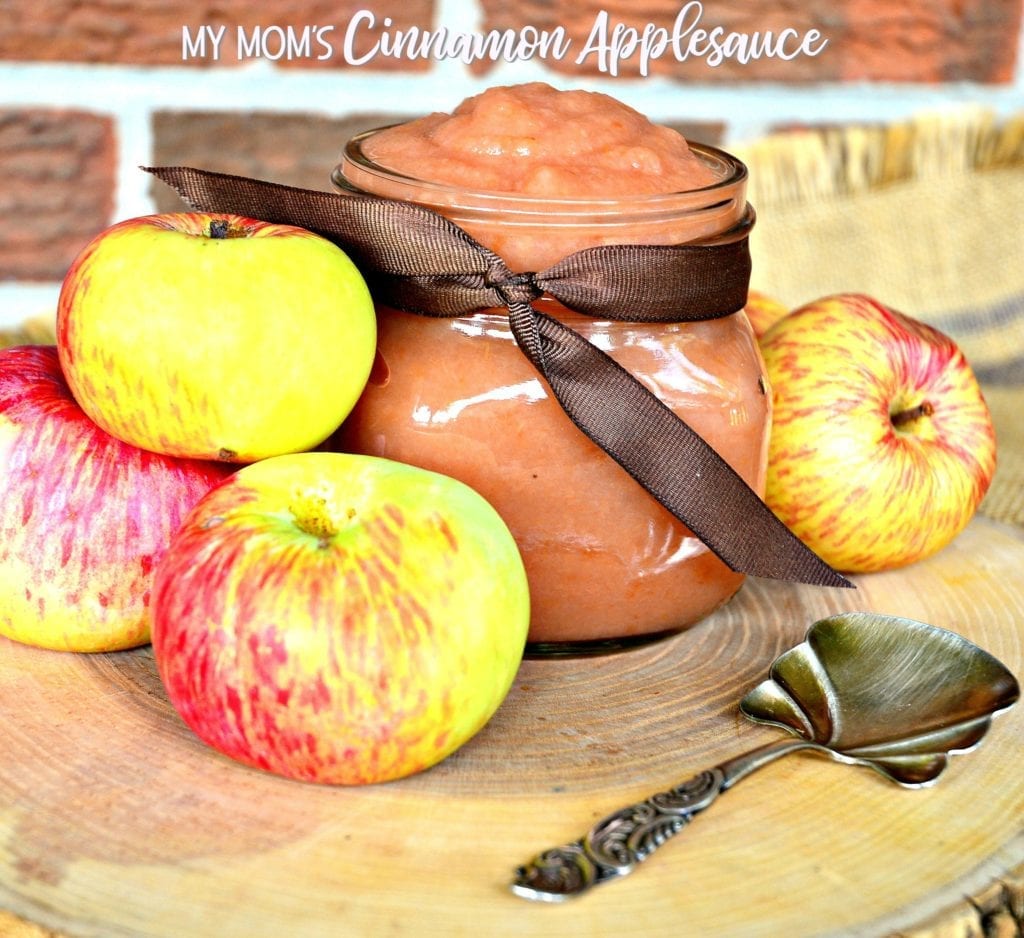 Every Fall found my mom buying bushels of apples at John Panozzo’s fruit stand. I loved going there as a kid. With cement floors and a damp interior that smelled like apples and hay there was a realization that the seasons were changing and quickly moving from corn to apples. At least that’s how it seemed to me. Summer meant corn and gladiolas and fall meant apples and pumpkins. Yes, life was much simpler then.

Now Mom was probably buying Winesaps or Jonathans or McIntosh apples, or perhaps a combo, because good applesauce is made with a variety of apples. I remember her peeling and coring and then simmering those apples so gently on the stove. After going through the food mill the warm applesauce was stirred together with tiny cinnamon red hots that melted and gave my mom’s applesauce the prettiest pink color and the most exquisite taste. After cooling it was poured into plastic freezer containers where it waited for those special occasions when Mom pulled it out for us to devour. 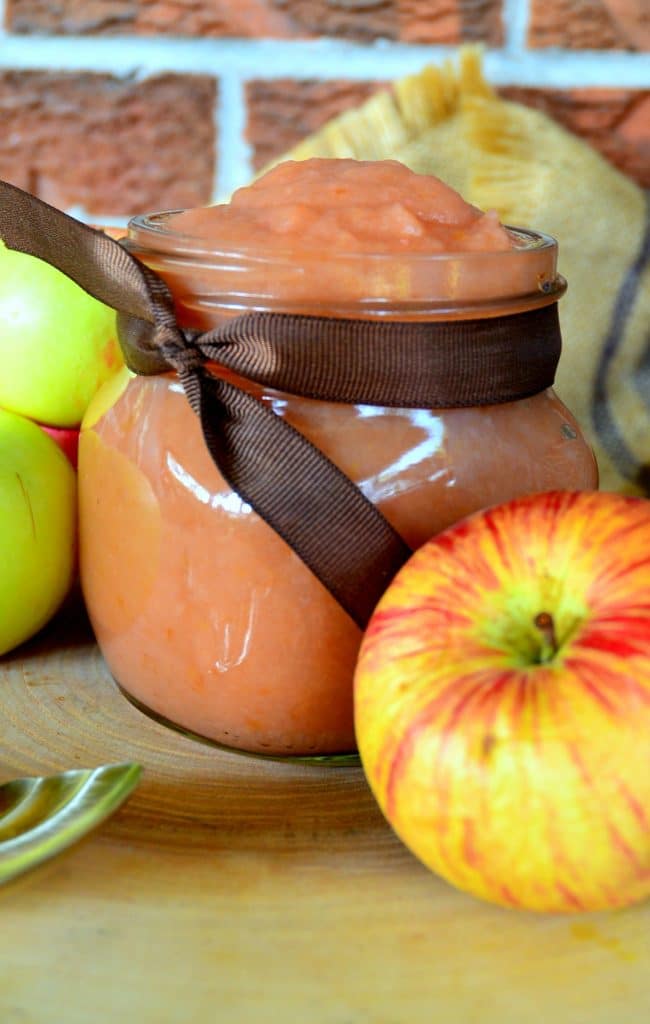 Well, it’s hard to find those tiny cinnamon red hots that were made with sugar and not corn syrup, but as times change we must change too. I’ve kept the tradition going with Brach’s cinnamon candies that I unwrap and crush in a ziplock bag, and it is that unperfect candy that I pour into my applesauce that makes it perfect and special. This year I’ve already made 9 quarts of applesauce and I could easily make many times more. We have an apple tree in our yard and this year it gave and gave and GAVE! I can’t tell you what kind of apples are on its branches but I can tell you that this year I have more apples then I can possibly use.

Manservant loves my cinnamon applesauce and I love it too. Whenever the kids come home we always pull a bag out of the freezer and I can tell you that extra cold cinnamon applesauce is a real treat. I always take some out around Hanukkah to go with our latkes and I always keep some ready for whenever anyone is sick. I don’t know why, but in our family we love to eat applesauce when we aren’t feeling well! 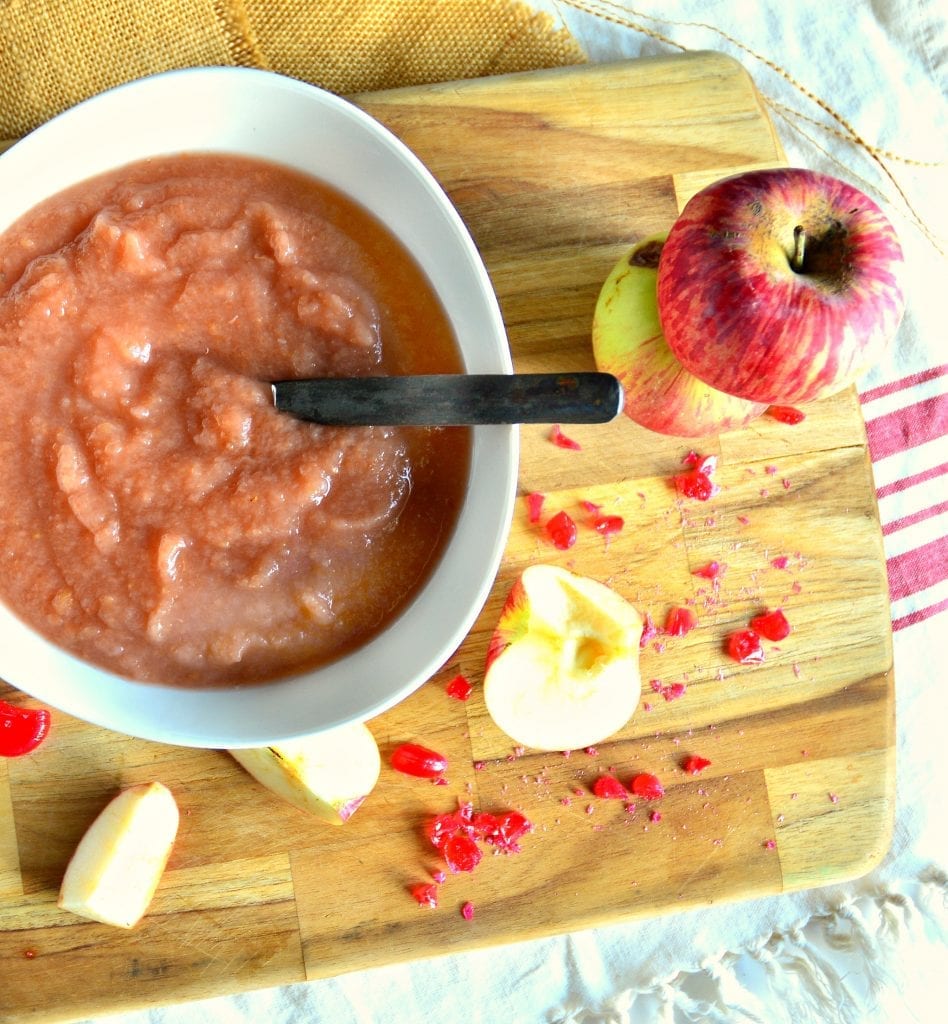 I don’t know why my mom made applesauce. She always made apple pies too. I remember her making them with a neighbor and perhaps it was their time to bond and talk and make the kitchen smell good. Maybe she had extra time because ladies’s golf had finished for the season… I don’t know, but whatever the case, I’m not sure she ever knew how much us three kids loved that applesauce. Well, now you know, Mom. We love your applesauce! 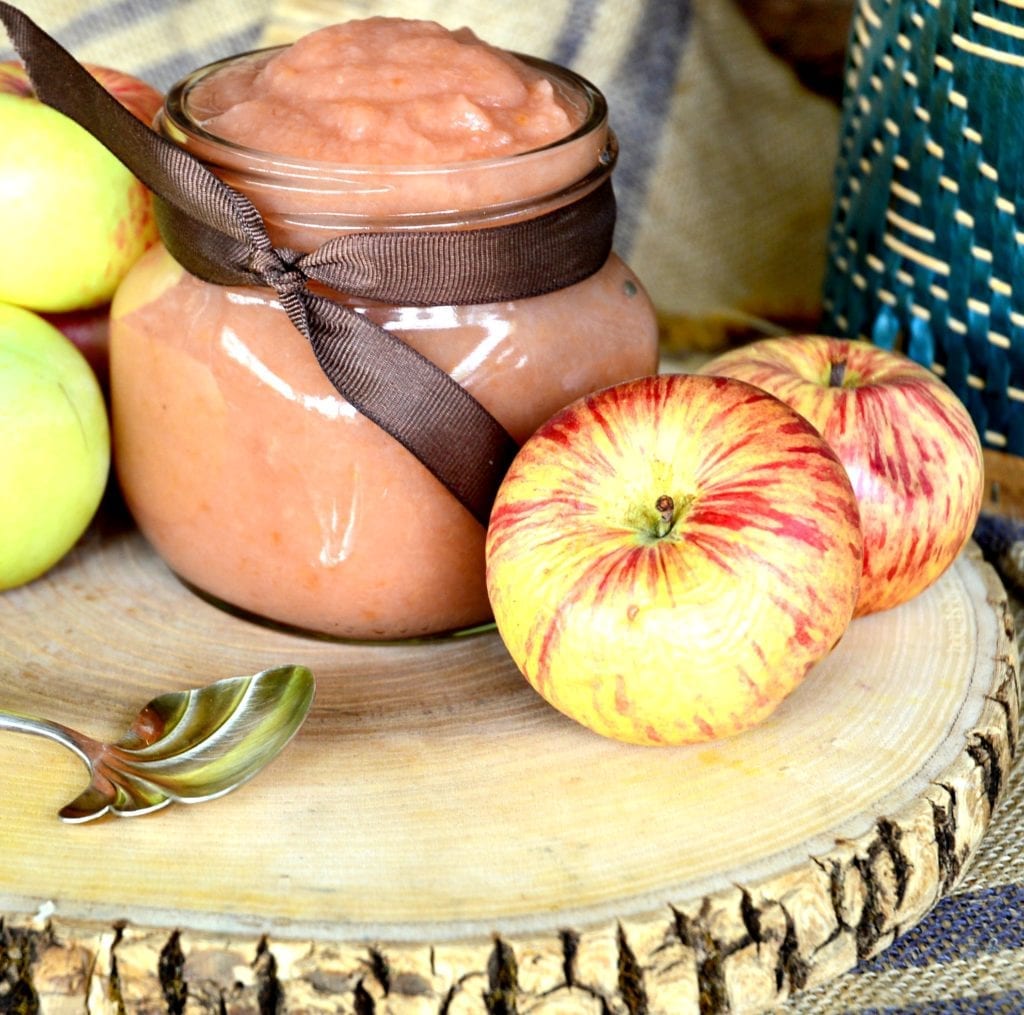 To get the apples ready they must be cored. Holding your apple upright on a cutting board, first slice in half as close to the core as possible. Then turn your knife at an angle and cut another third off. Finally turn again and cut the final third. There is a bit of waste, but this is a real time saver. No need to chop further. They are now ready to simmer. No need to peel because I think the peel gives flavor and color. And let’s keep this simple, right??

Please Pass This Recipe Along! 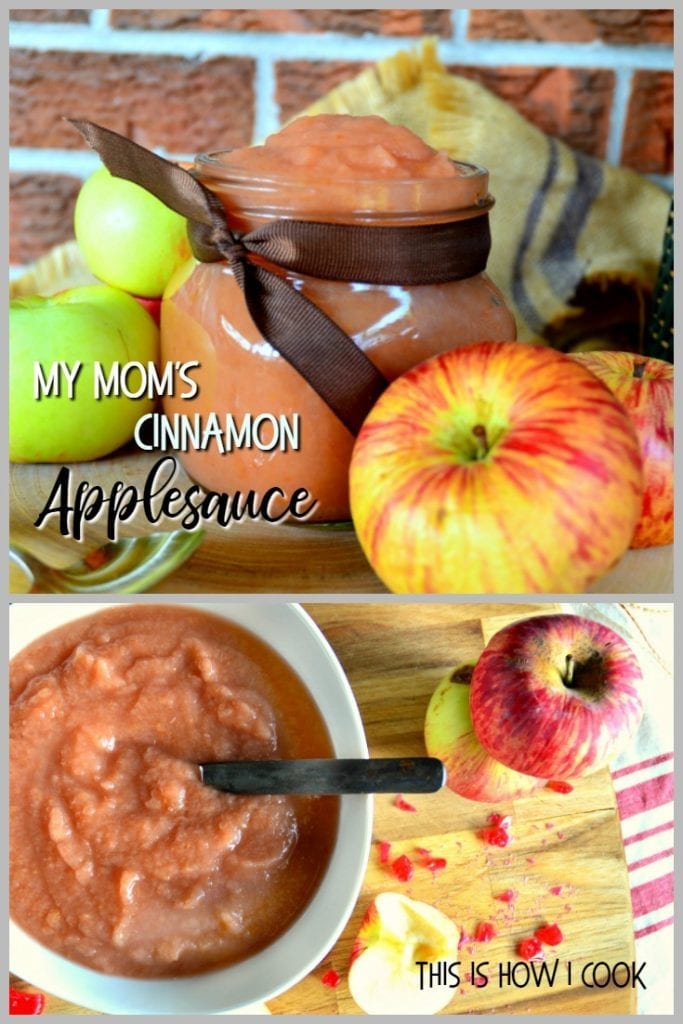 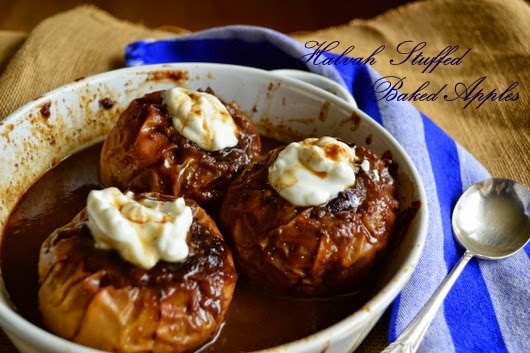 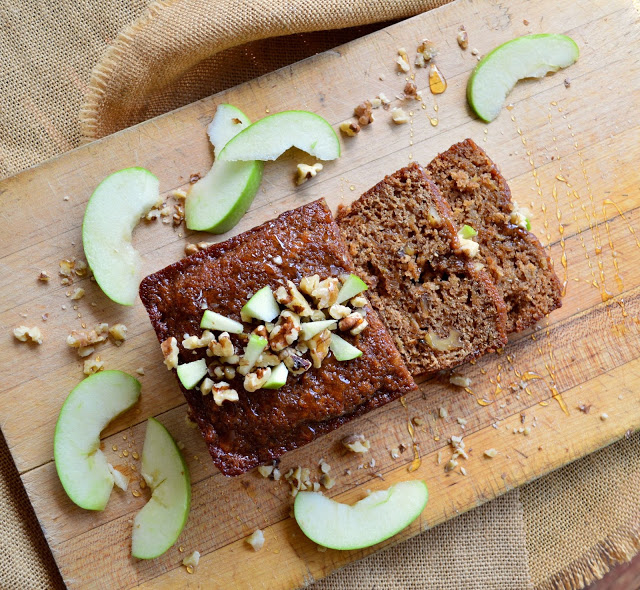 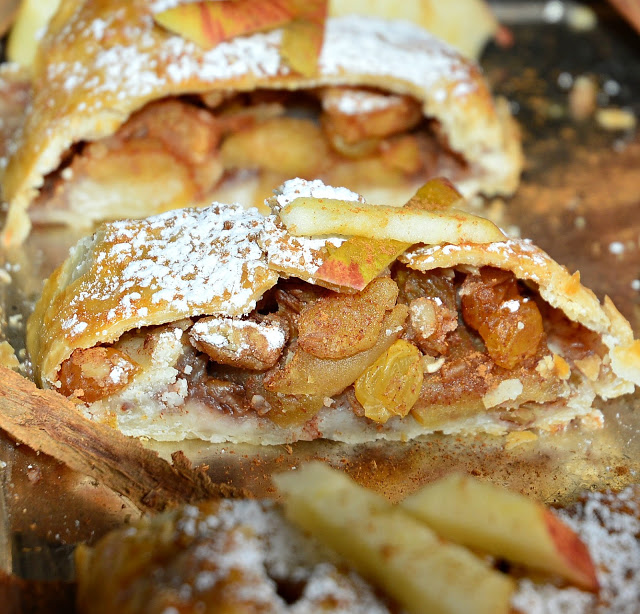 And a few more: Apple Crisp Ice Cream would taste perfect on any of the above! Thanks Barefeet in the Kitchen for this! And this Apple PanDowdy is on my must try list…but so far most of Saving Room for Dessert’s recipes are on there!

My mom’s cinnamon applesauce is made with cinnamon red hots. You will love it!

Core apples. I recommend using the method described above. No need to peel or chop further.

Place in a large Dutch oven with 2 c of water. Cover and bring to a boil.

When the apples are boiling, turn down to a simmer. Keep covered and simmer for about 40 minutes until apples are soft. You do not want them to disintegrate.

While apples are simmering crush red hots in a ziplock bag. If you find the little ones, no need to crush those. You may add more red hots according to taste. The cinnamon flavor is mild and there is not heat!

Place crushed red hots in a large bowl. When apples are soft, place a food mill over the bowl and add soft apples. Turn until all that is left in the food mill are the skins of the apples. Stir the melted red hots into the applesauce.

When cool, spoon about 3-4 cups into 1 quart bags and freeze while flat. This recipe makes three 1 quart bags.

What a great recipe! I love the color and would love to have a few jars of this now. Thanks Abbe! Pinning and sharing :)

Your applesauce sounds good and brings back memories of our apple orchard in New Hampshire. I agree about leaving the skins on if you are putting it through a food mill as the skins give it a nice color.

I would have never thought of using cinnamon candy in apple sauce! I love the idea and hope to buy some apples at the farmers' market soon just so I can try it. I love applesauce with potato pancakes too!

Hi Abbe, I find it so interesting adding the cinnamon candies in the applesauce...you add sugar and cinnamon at the same time...so smart! Oh...thanks for the tip in how to core apples...bit time saver! Have a wonderful weekend!