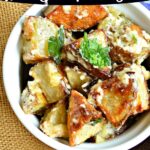 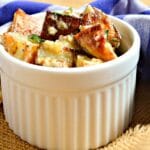 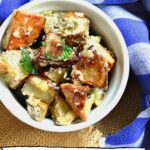 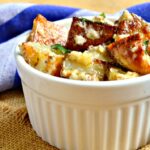 This Warm Roasted Potato Salad Recipe with garlic aioli is a perfect side dish to most any meal. If you love garlic and potatoes, you will love this! 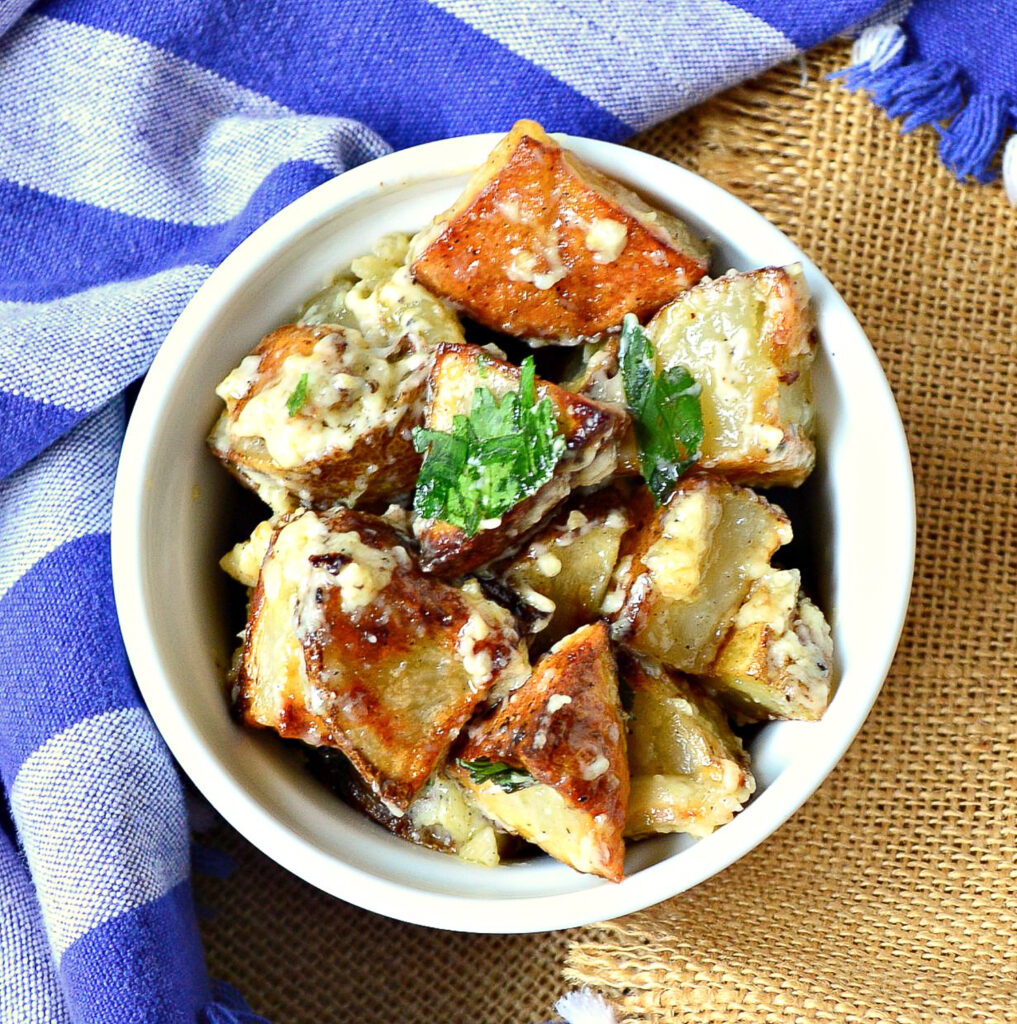 This roast potato salad recipe is one of our favorites ever since we discovered it on Food 52 over 6 years ago.

Not a traditional potato salad, this roasted potato salad begins with potatoes, tossed with olive oil and salt, and then roasted on a rimmed baking sheet.

The crispy, hot potatoes are then mixed with a garlic aioli dressing made with minced fresh garlic cloves that have been combined with Dijon mustard, lemon juice and mayonnaise.

If you love golden brown potatoes in a creamy dressing, you will love this great recipe.

This simple recipe is savory, full of garlic and of course my very favorite vice – roast potatoes.

I love potatoes. I can eat them fried, baked, hashed, mashed and even boiled. Those I must have with lots of butter, sour cream and chives, please.

Manservant complains when I make too many potatoes because of the low or high GI thing. I’m not very good with numbers so I just ignore him. 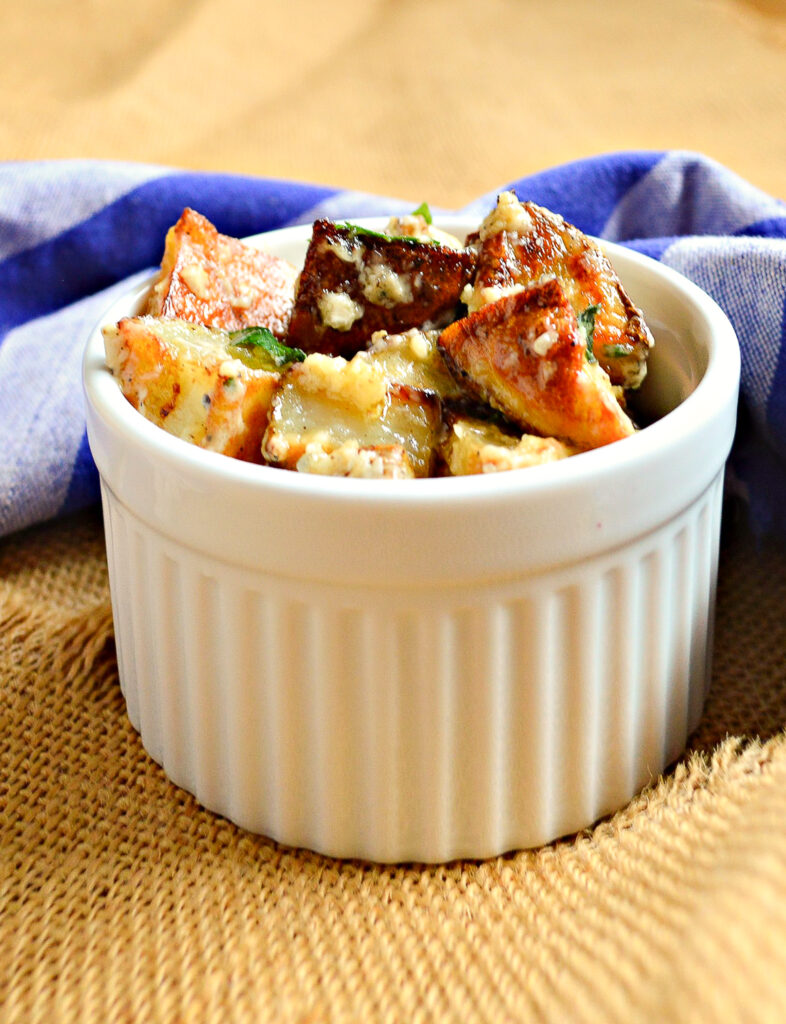 This simple, warm potato salad is a perfect side dish to most any main dishes, and is one of the best potato recipes I know of.

Alex always requests this and apparently makes it quite often in Taiwan.

Combine potatoes with fresh parsley, black pepper and toss potatoes with the mayonnaise dressing and you have a huge hit on your hands.

What kind of potatoes can be used for making roast potato salad?

Many kind of potatoes can be used but if using large Russet potatoes, please make sure to cut them into bite-size pieces.

No need for boiling the potatoes in this recipe, which means staying away from waxy varieties such as fingerling potatoes.

Yukon golds are a great potato for roasting. If you can find baby Yukons so much the better.

Slice them in half and toss with the oil and salt and place them in a single layer before placing into the hot oven.

This recipe calls for regular salt so if you are using kosher salt, you may want to increase it a tad. 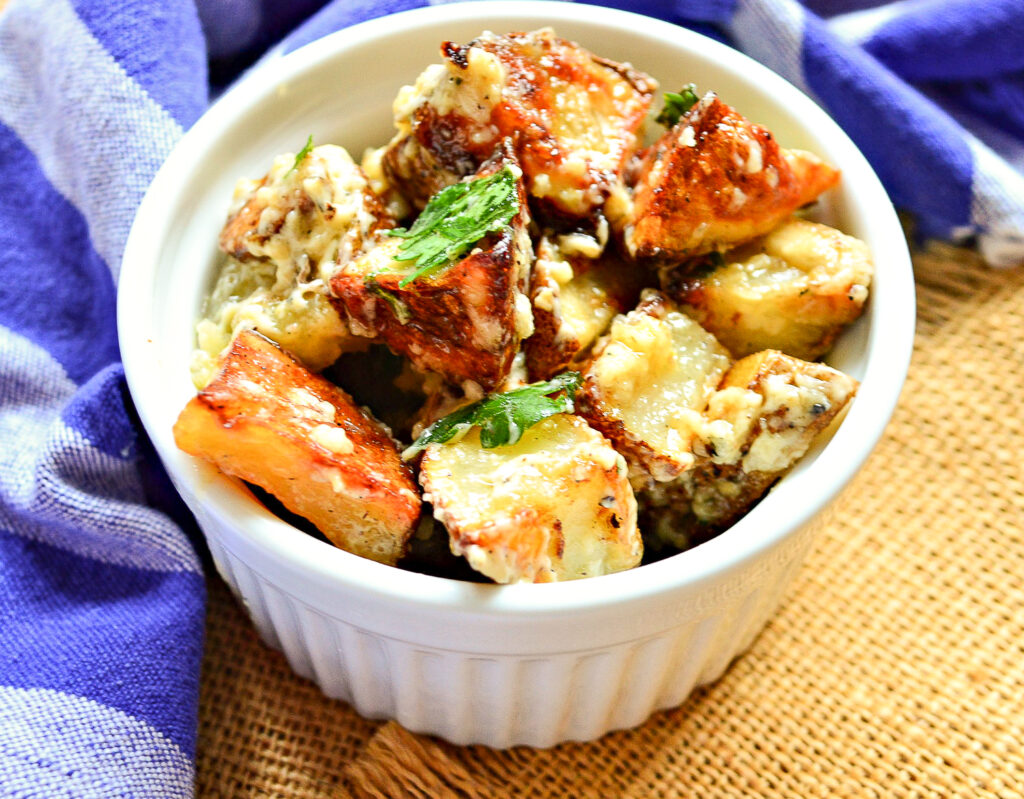 Yes, this is a take on Spanish potatoes often served as tapas.

Honestly, if you want to do that, just roast the potatoes and use the garlic aioli as a dipping sauce.

Make this and have a new best potato salad recipe. We served this with steak and trust me, no one missed the baked potato.

Just make sure to use warm potatoes vs. cooled potatoes, otherwise the dressing doesn’t melt into the potato mixture, which is what you are going for!

And please be sure to use fresh garlic, not garlic powder. It does make a difference in this recipe with so few ingredients.

When the Queen Mother came to visit I made her BBQ ribs. Meat isn’t really my thing, but Manservant kept pestering for them, so I succumbed because I know the Queen loves them. 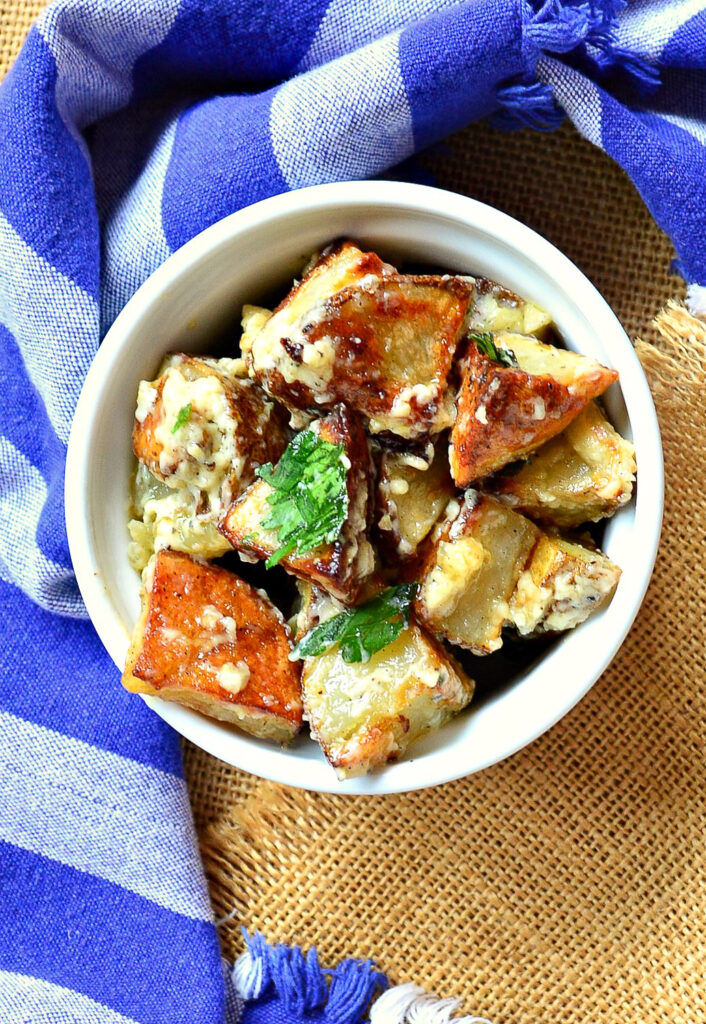 I also made a grilled corn bread panzanella salad that I adored. The Queen had no comment.

Then I made this potato salad and the Queen said it was a tad too salty. Then she asked if it would be on the blog. So… I guess it wasn’t that salty.

I followed this up with a lemon pie because lemon is the Queen’s favorite, though it isn’t mine. The Queen said it was going to fall apart when I cut the first slice. It didn’t. It was fine.

Then the Queen pointed out that the filling didn’t fill the crust. It didn’t. But I like crust.

In any case, I took a few quick photos of the potato salad in the dim light, so I could post this great new discovery. All while Manservant was so kindly doing the dishes.

I’ve been making it for a few years now and my family loves it. I discovered it on Food 52 and though it isn’t a traditional potato salad, it is one of my all time faves.

The potatoes are roasted and taken hot, golden and crisp out of the oven, and tossed briefly with this heavenly garlic aioli. It is a potato salad meant to be eaten warm.

If there are leftovers, which there probably won’t be, they refrigerate OK. However, this roast potato salad just does not taste the same, as hot from the oven.

And so I give you one of my favorite potato dishes. Even the Queen liked it. But boy, oh boy. It sure is hard being a princess! 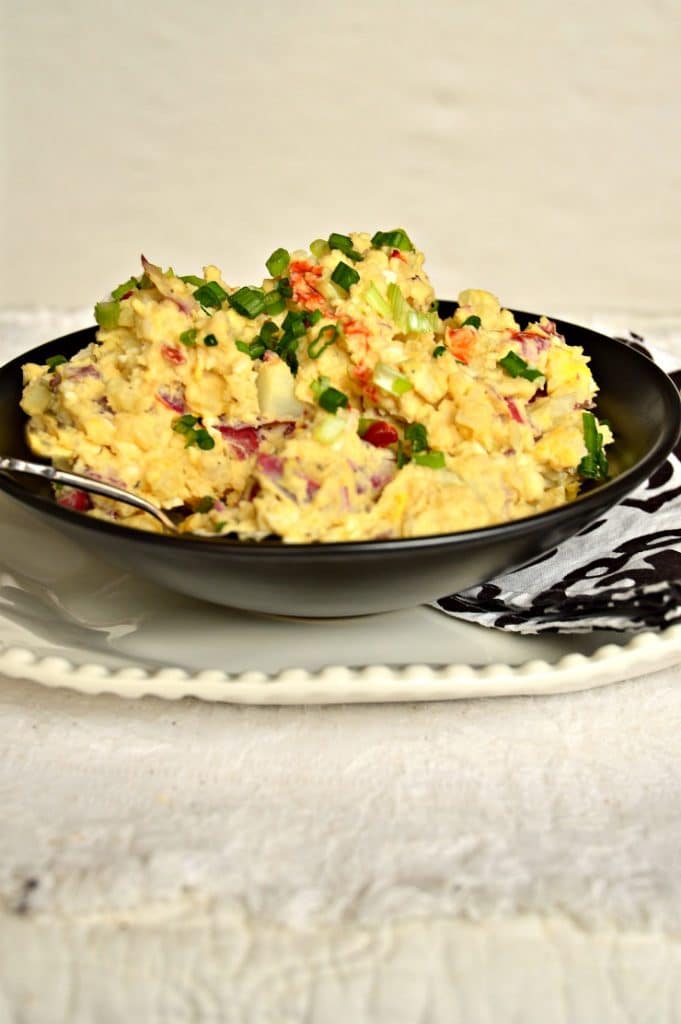 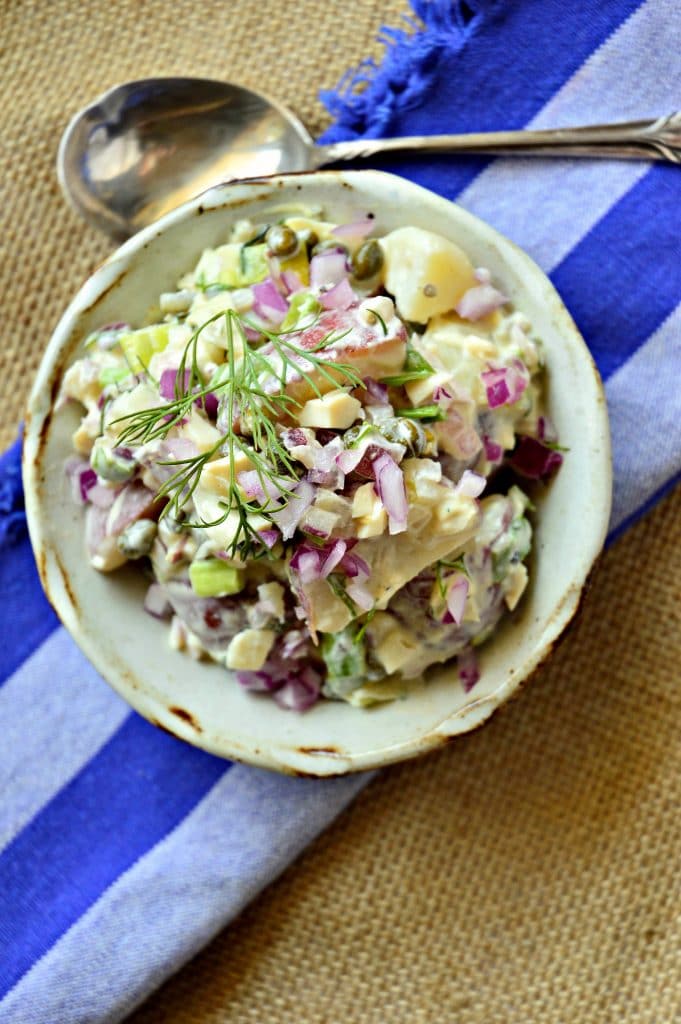 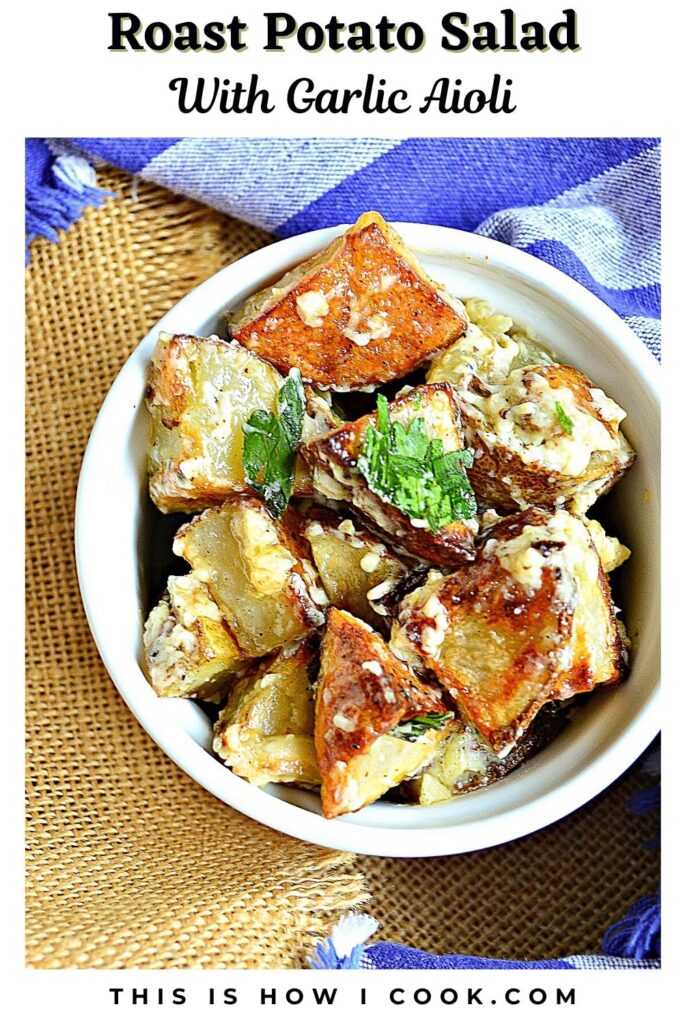 Warm Roasted Potato Salad with garlic aioli is a perfect side dish to most any meal. If you love garlic and potatoes, you will love this!

Preheat oven to 400. Toss potatoes with 2 T of the olive oil, 3/4 t coarse salt and 1/2 t freshly ground pepper. Roast for 40 minutes, turning about the halfway mark. (Important tip: To make the potatoes  crisp and golden do not crowd the potatoes on the baking sheet. Air needs to circulate around the potatoes to make them beautiful and crisp. And golden and delicious!)

While potatoes are in oven make the dressing. Combine the remaining 1 T of oil, 1/2 t of salt or less, with garlic, mayo, lemon juice and Dijon. Whisk well and set aside until potatoes are ready.

Remove potatoes from oven and toss with the aioli. Stir in parsley.

Serve immediately. This is a dish that should be eaten right away.

What a fabulous idea to roast the potatoes for this salad and to highlight it with garlic aioli. Wow! You have my mouth watering for this right now. What a great salad for the grilling and cookout season. I must try this SOON!

4 jumbo sized garlic sounds like our kind of potato salad. Creamy and dreamy... Perfect for all the potlucks and BBQ's this spring and summer. Stay well and take care

Yum! Love potatoes and garlic. This looks terrific -- tons and tons of flavor. Tons. :-) Thanks!

I agree, this potatoes are delicious and there definitely won't be any left over.

I love this, potato salad with heaps of garlic dressing, what a sensational idea.