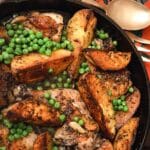 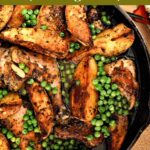 Chicken Vesuvio is a roast chicken and potato dish in a garlic white wine sauce with lots of oregano added to up the flavor. A Chicago specialty! 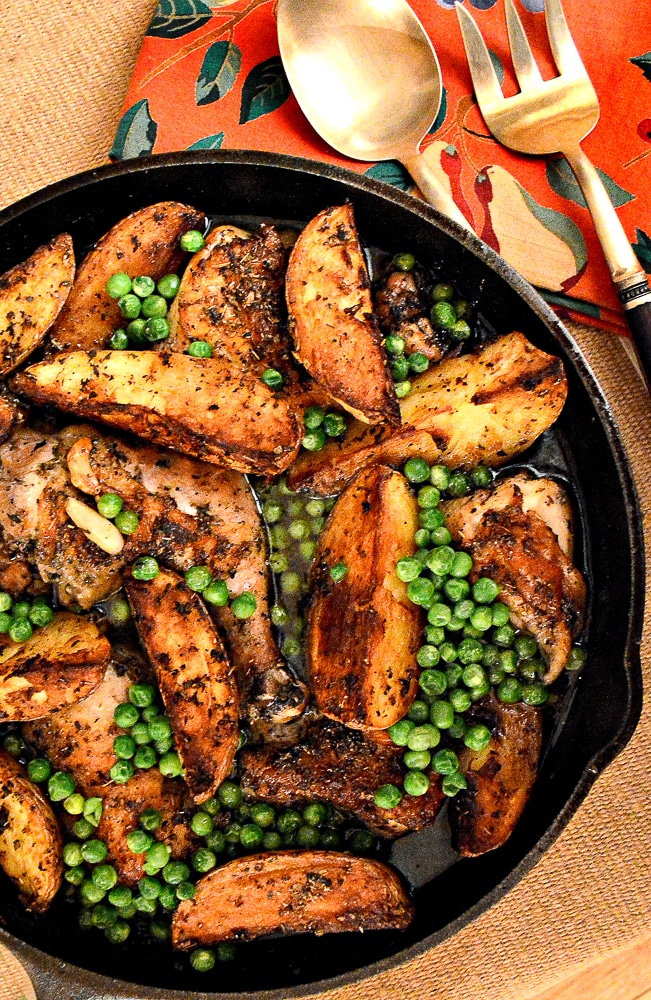 It only took me 33 years to discover Chicken Vesuvio. Pretty pathetic, I know.

After all I grew up off of I57, spent numerous years trailing my parents to various restaurants in Chicago, and yet had never had Chicken Vesuvio. I think they were holding out on me.

It took going back to Chicago for a wedding when the kids were just one year old, to bring it to my attention. And it has held it ever since. 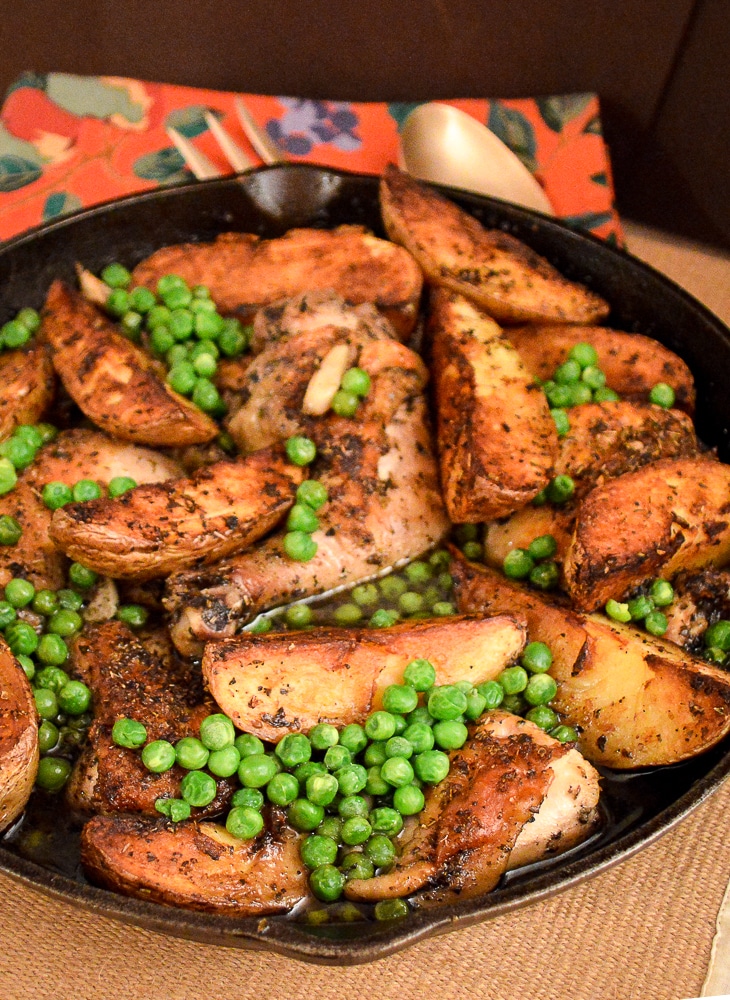 Where did Chicken Vesuvio originate?

Chicken Vesuvio is a Chicago dish, made famous at the Vesuvio restaurant in the 1920’s. Or so the story goes.

It is said the name came about because when the chicken broth and wine are added to the pan during deglazing that the steam made the Italian chef think of the explosion of Mt. Vesuvius. Good story, huh?

Many famous Chicago Italian restaurants feature chicken Vesuvio. In fact, there are now Vesuvio preparations for fish and steak and who knows what else?

I’m guessing they all contain lots of garlic, oregano and wine. 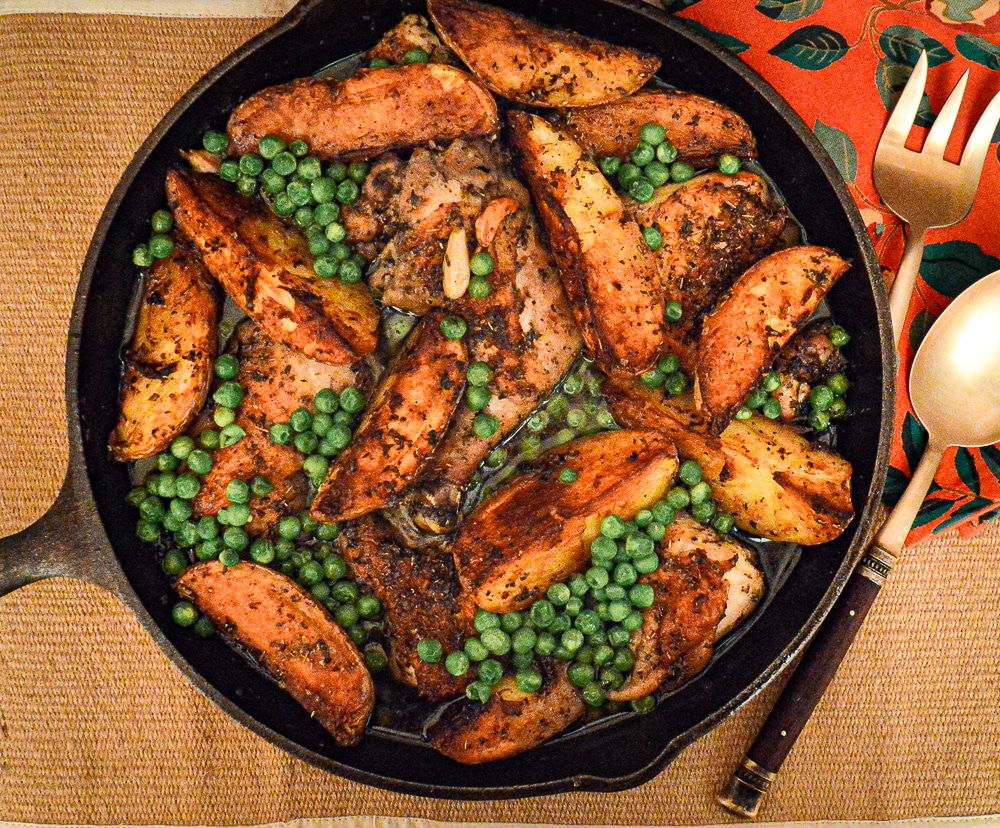 But we are talking about chicken.. And potatoes;  golden brown, crispy potatoes covered with garlic and oregano and wine. The Vesuvio potatoes. The smell alone could kill you.

Some prefer the potatoes not too crispy…the better to soak up the pan juices…and they are right. I prefer a combo of both, which you will get as an option in this chicken Vesuvio recipe.

The perfume that this chicken dish creates is quite intoxicating if you love garlic and wine and chicken. You do, don’t you?

Though the dish takes a bit of time to make, it is not hard. I first published this recipe in 2013, but since then I’ve found a few tricks to make cooking this faster and easier. 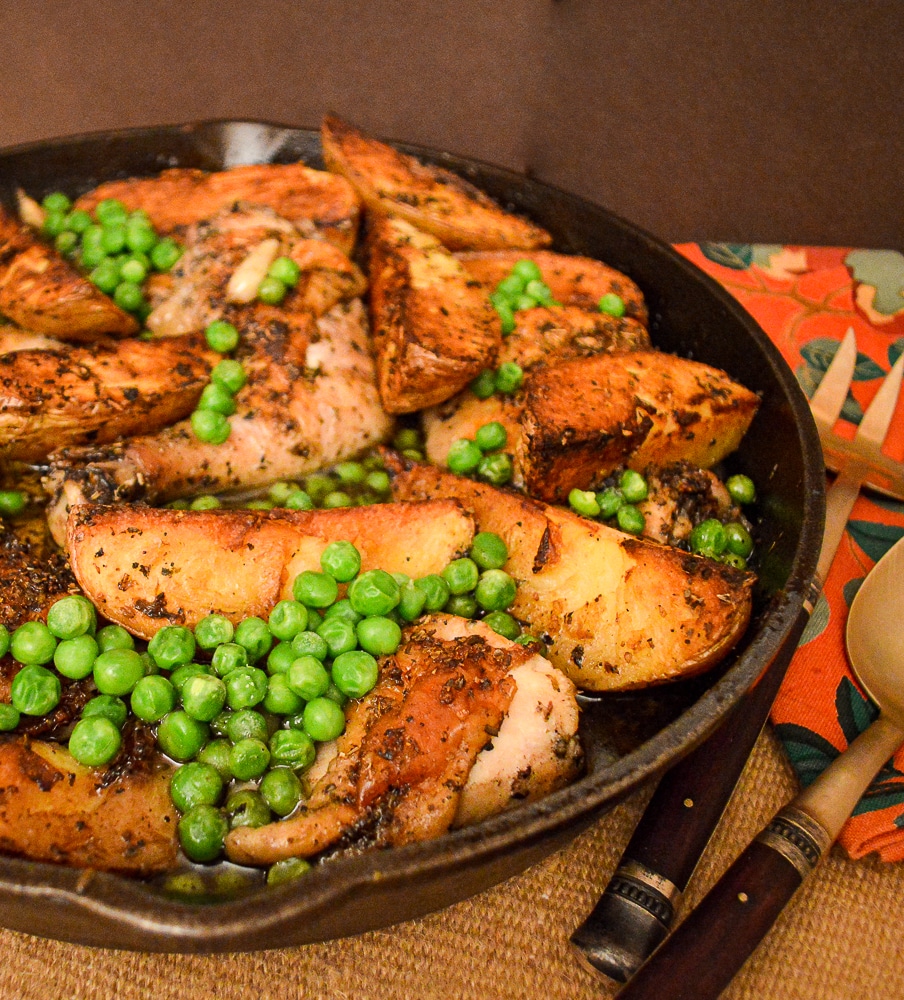 How do you make Chicken Vesuvio?

Begin by roasting the potatoes in the oven. Less frying, less mess. One doesn’t need to cook them all the way through, as they will finish cooking in the sauce in the oven.

On the stovetop is where cooking the chicken takes place. It’s a matter of browning the chicken, just as one does in many cooking recipes.

The sauce is made with wine and chicken broth and garlic. It then gets enriched with a bit of butter and then it is poured over the potatoes and chicken, where it finishes cooking in the oven.

Don’t forget the sprinkle of lemon and wine, parsley and garlic at the end. And yes, the peas? I just love them for the color they add, but the sweetness of the peas does add to the dish! 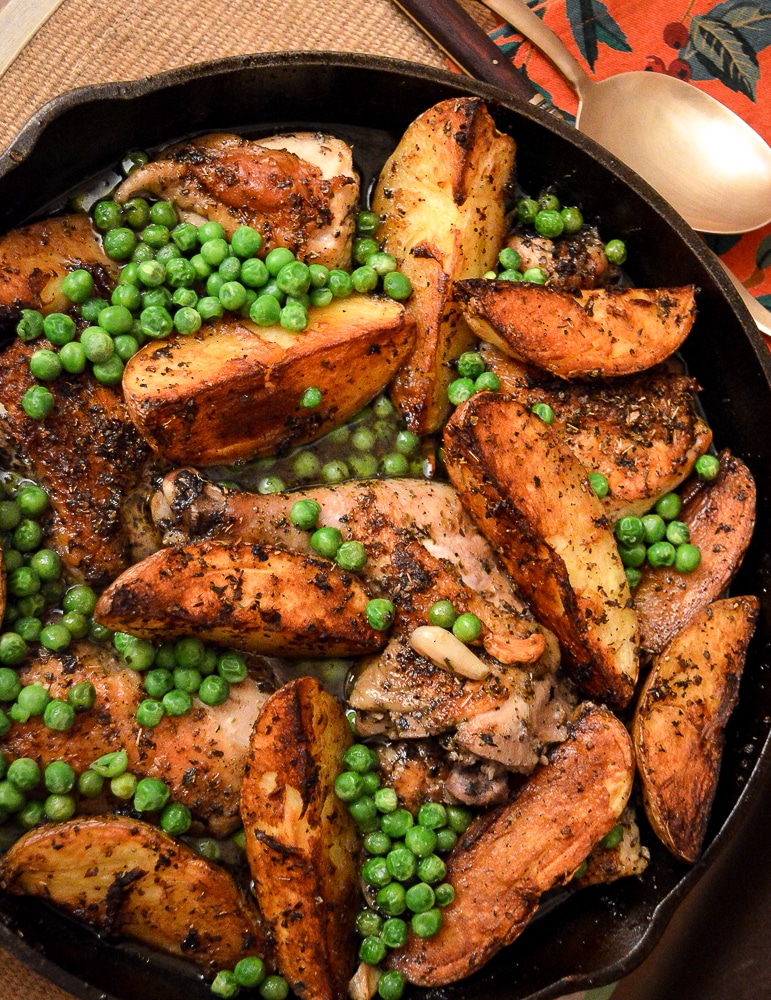 And now the rest of the story!

It’s a story that began with an invitation to my cousin’s wedding in 1991. We had just moved into a new home in Denver, about 30 minutes away from our first place, that was caving in under the addition of two more.

The only babysitters I knew were two teenagers who lived near our old place. And then the wedding invitation came and my mother said you have to be there. Now, it is not that I didn’t want to be. I mean the thought of escaping from 2 roving, almost one year old’s was appealing.

And unpacking boxes in a new house – well, those could wait. So I made the airline reservations and began to pray. I mean leaving my two children with two teenagers in a strange neighborhood, in a strange house and missing their first birthday – well that would equate to child abuse today.

But I did get the recipe for Chicken Vesuvio. That will have to do. 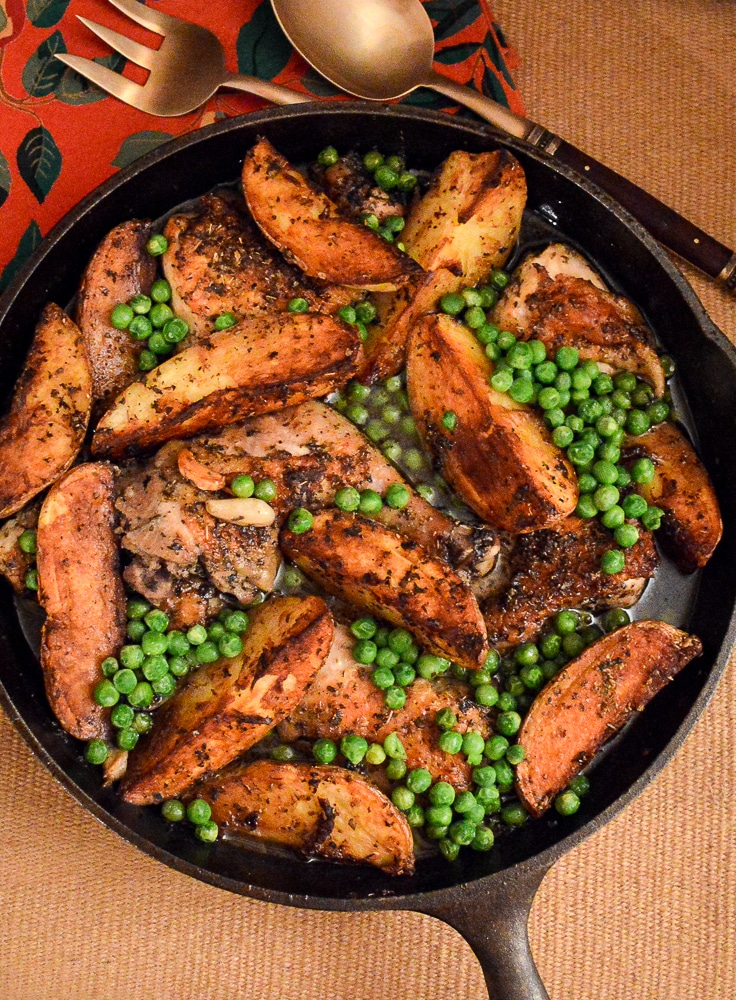 The rehearsal dinner was held at Harry Carey’s in Chicago. I was seated at a table with someone I had been fixed up with on a blind date many years before. We each introduced our spouses to each other. What fun.

But that fun was quickly replaced with little cast iron pans of – you guessed it- Chicken Vesuvio being placed before us. I thought I’d died and gone to heaven.

I’m still not sure if the thought of eating and only feeding myself was contributing to this exhilarating feeling, but whatever it was has never left.

I still love Chicken Vesuvio, even if it leaves my cook top a giant greasy mess.

You can go online to find links to many dishes that say they are from Harry’s and maybe they are. Mine tastes as I remember it and that will have to do.

I will also tell you that Chicken Vesuvio is a great dish for Shabbat. You can get it ready ahead of time and throw it in the oven for the final cooking whenever you desire.

It is also perfect for a winter’s night or a Sunday supper.

And It makes your home smell warm and inviting. And Italian!

It doesn’t get much better than that!

Chicken Scarpariello with Sausage and Peppers 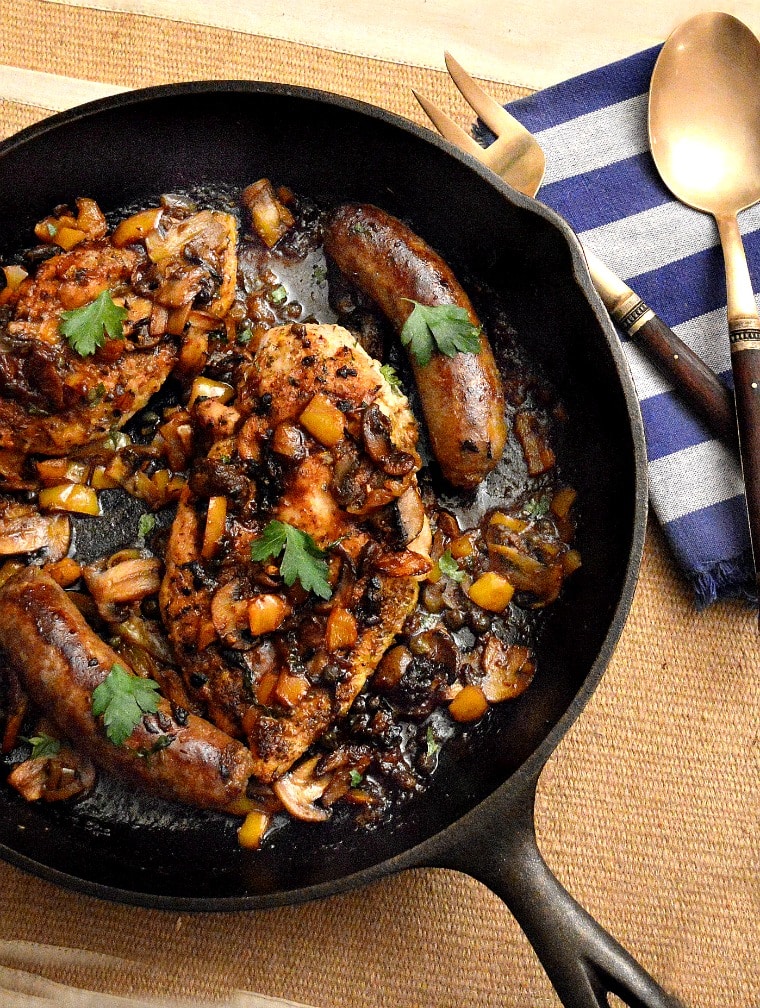 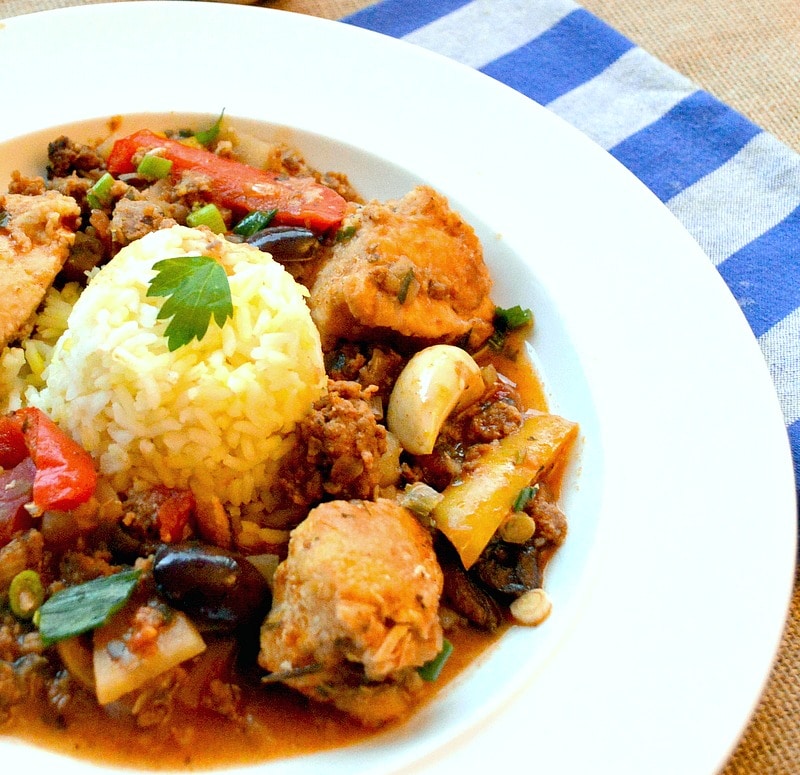 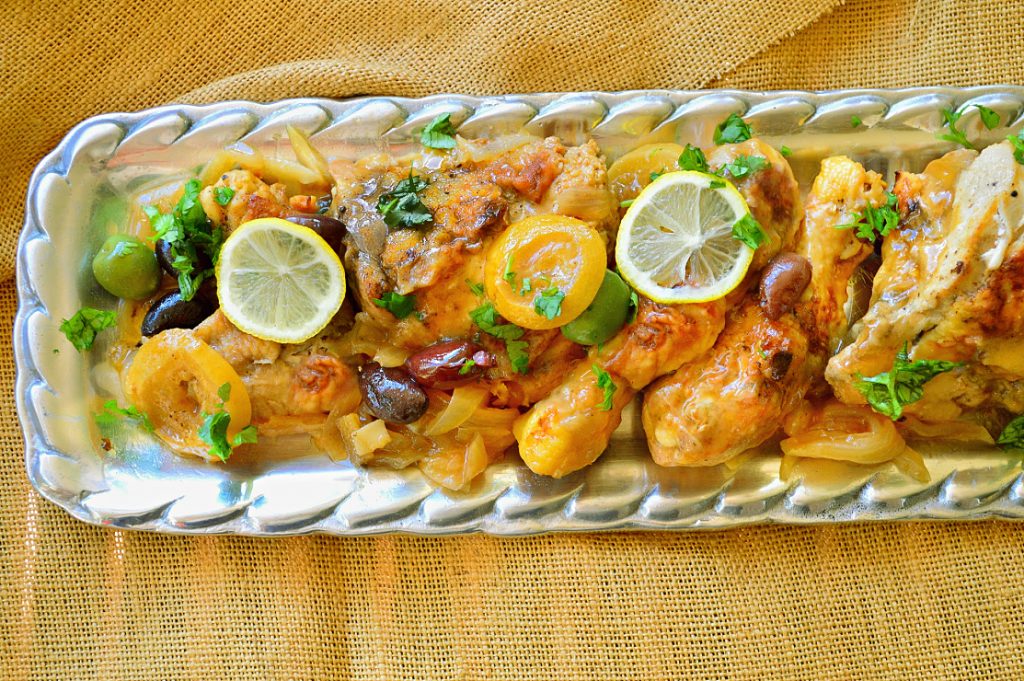 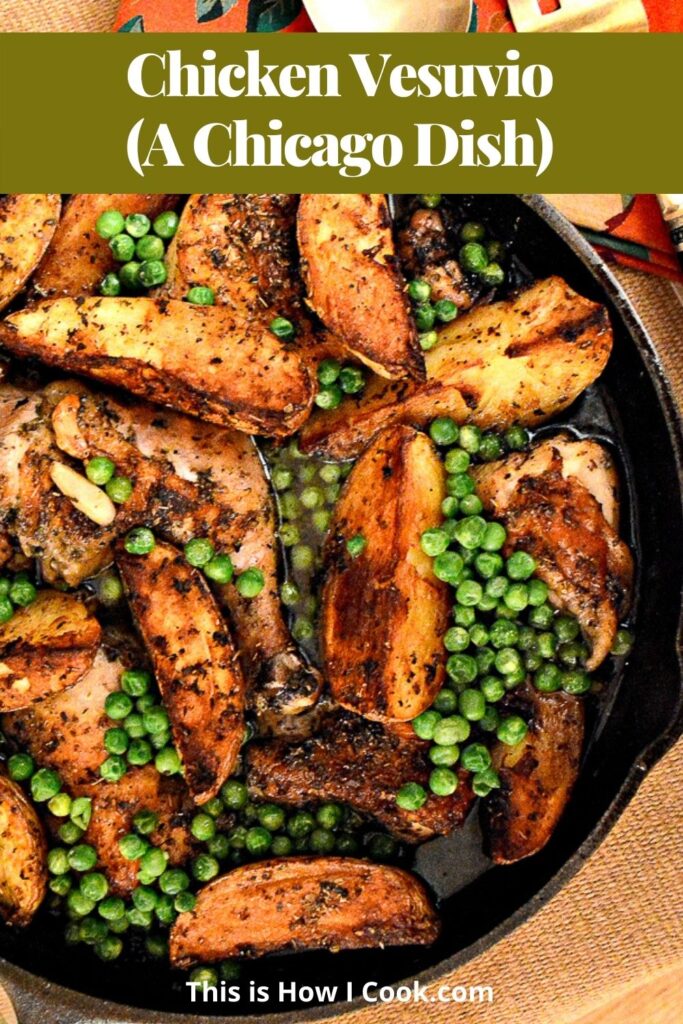 Chicken Vesuvio is an Italian American dish that originated in Chicago. Chicken and potatoes, cooked in a garlic white wine sauce is outstanding!

7 cloves of garlic (Reserve 1 for serving)

Spread the potatoes in an even layer in a 13 x 9″ pan. Try not to crowd or the potatoes will take longer to turn golden. Bake,  turning over after about 15 minutes cooking until the edges are beginning to brown and the potatoes can be pierced with a fork. They will finish cooking with the chicken.

While potatoes roast, prepare the chicken. Season the chicken well with salt, pepper and oregano.

Heat 2 T olive oil in a large 12″ skillet over medium high heat until the oil shimmers. Cook the chicken skin side down until it is golden brown, about 8 – 10 minutes. Turn over and brown the other side, too. You may have to do this in batches because if you crowd the pan, it will steam and not brown. Transfer chicken to a plate when it is golden.

Pour wine mixture over the potatoes and stir to combine. (HOWEVER, if you choose to have more crispy potatoes reserve some for the top of the dish after adding chicken.) Now place chicken on top of the potatoes, skin side up.

Bake until the chicken is cooked through and the potatoes are tender, about 20 – 25 minutes. About 5 minutes before chicken is done, stir in peas.

Now using the oven’s broiler, broil until the chicken has turned golden and crisp, about 1 – 2 minutes. Drizzle with the lemon juice mixture before serving.

.Serve with pan juices and lots of bread for dunking!

Chicken Vesuvio can also be made with just chicken thighs or breasts. You may have to adjust the cooking times.

BONUS RECIPE:  Chicken Vesuvio Hash (Since there are now just two of
us eating enough chicken for four)

Leftover chicken and potatoes from above Chicken Vesuvio recipe with skin and bones removed, chopped

Heat oil in pan and add pepper and onions. Saute until soft.

Add chicken and potatoes and cook until golden. I flatten this with a spatulas so everything gets golden.

Use wine or broth to deglaze pan. Add rest of Vesuvio mixture, like the sauce and peas to pan. Let brown some more and get a bit crusty and crunchy!

It is ready to eat, fried egg or not!

This looks good enough to eat! :) Love all the ingredients as well as the fact that it's a one dish meal. Like you, I prefer cooking with vermouth over white wine. Not sure why, but I just think it's has a better flavor for cooking. Thanks for the idea on how to use leftovers since it's just the two of us as well and this would definitely provide us with two meals. Another YAY!

Just by reading the description of this dish, I know my family is going to love it. Such a beautiful dish!

I love Chicken Vesuvio! It's definitely a Chicago thing and here in the NW suburbs of the city too. After seeing this, I need to make it again. Good eating for sure!

And I love Harry Caray's!!!! I've had many delicious meals, Chicken Vesuvio, and great times at the Loop location, RN! Woo hoo!!!! Just wish Harry Caray was still around and announcing Cub's games!!!

This dish looks fabulous! Pinning to try later! This is something even my picky husband would eat (minus the peas, which he will pick out). Lol!