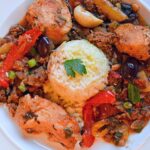 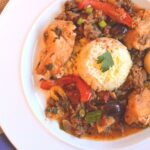 This Portuguese recipe for chicken stew has not just a whole head of garlic, but chorizo and peppers and potatoes. Totally luscious and so easy to make in a big Dutch oven! 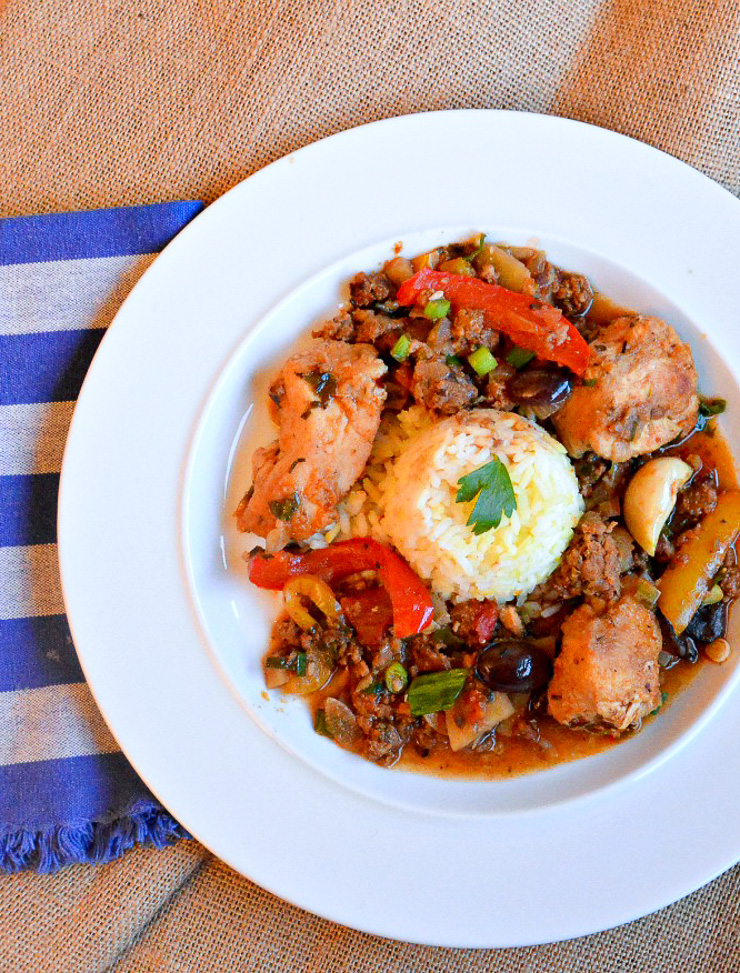 Though I was not on the lookout for a Portuguese recipe when I spotted this Emeril chicken stew, I sure was happy with the way it turned out.

It’s hard for me to resist a dish with so much flavor.

With the combination of chicken and chorizo, olives and capers, and potatoes and peppers; well frankly, this has most of my favorite ingredients all in one dish.

This is an Emeril recipe and though his face isn’t plastering the television like it used to, I must say that his programs were always a lot of fun.

Emeril’s mother, Hilda, was Portuguese and though many well known recipes from Portugal contain seafood, this one is just a flavorful chicken chorizo stew.

Apparently this was Hilda’s recipe and I’m not in a position to argue.

And no, that description doesn’t do this Portuguese recipe for chicken stew enough justice.

This hearty and wholesome, easy recipe to put on the stove, is always a welcome dish and when  I make it Manservant always asks why I don’t make it more often.

Perfect for my son who had just arrived home from a few days of heavy eating in the Big Apple.

And with an entire head of garlic in this recipe, it surely will keep the vampires away. 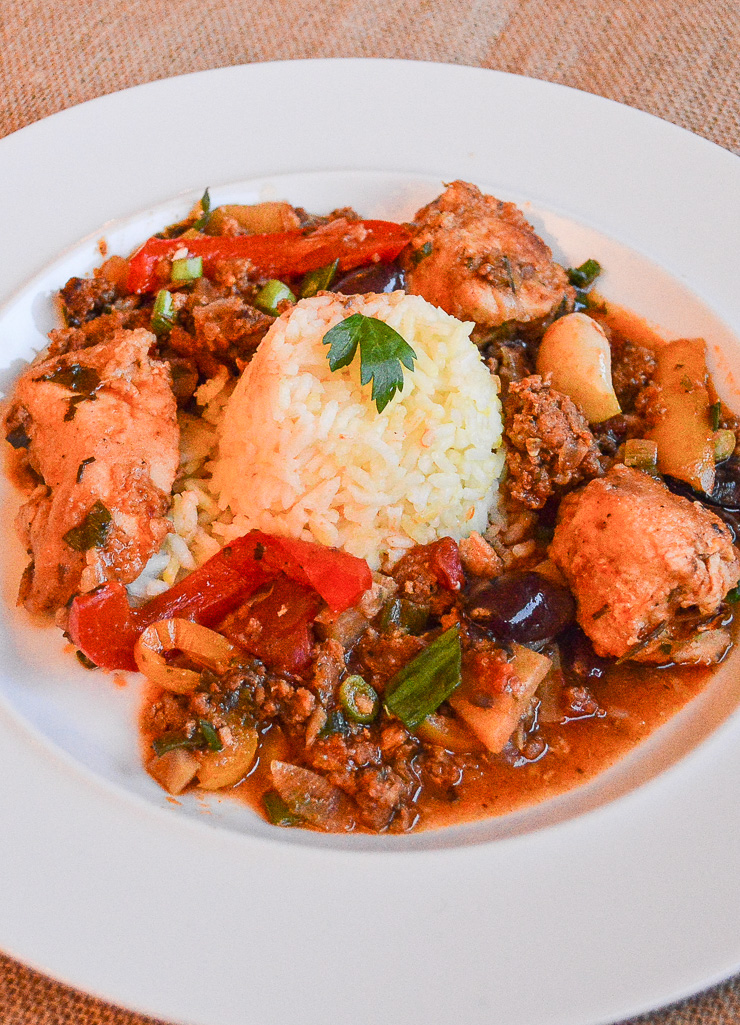 How To Peel Garlic:

The best way I’ve found to peel garlic is to smash each clove with the flat part of a heavy knife, using your palm to whack the flat part or side of the knife.

This should loosen the paper from the garlic and the clove should slip right out.

Whole cloves are what are required in this Portuguese chicken so the garlic flavor is very mellow.

If you want it to be more predominant, chop up a few of the cloves and cook them with the onions and potatoes.

How to Make Portuguese Chicken Stew:

Decide what kind of chicken you want to use. Chicken pieces with skin and bones are just fine, but I always have boneless, skinless chicken breasts in the freezer so that is what I used.

Dust the chicken with the flour/seasoning mixture and brown in oil until it is golden brown on both sides.

Don’t crowd the pan with the chicken as that will actually take the chicken longer to brown.

Remove the chicken from the Dutch oven and add the chorizo.

I used Mexican ground chorizo because I can’t find Portuguese chorico, which is kind of sad because I think I would love all the garlic and black pepper that it is made with.

Spanish chorizo contains more paprika. Both are dried sausages, unlike Mexican chorizo which is made fresh with ground pork.

Stir in the onions, potatoes and red peppers. Cook a few minutes and then add the garlic, olives, capers, and diced tomatoes.

Taste for seasoning and add salt, pepper and smoked paprika to taste. Stir in some wine or sherry, chicken broth, capers and cilantro.

Add back the chicken and bring everything to a simmer for 40 minutes or so.

Serve with saffron rice if possible.

I made this Portuguese recipe in my French oven-one of my most treasured pieces of cookware. 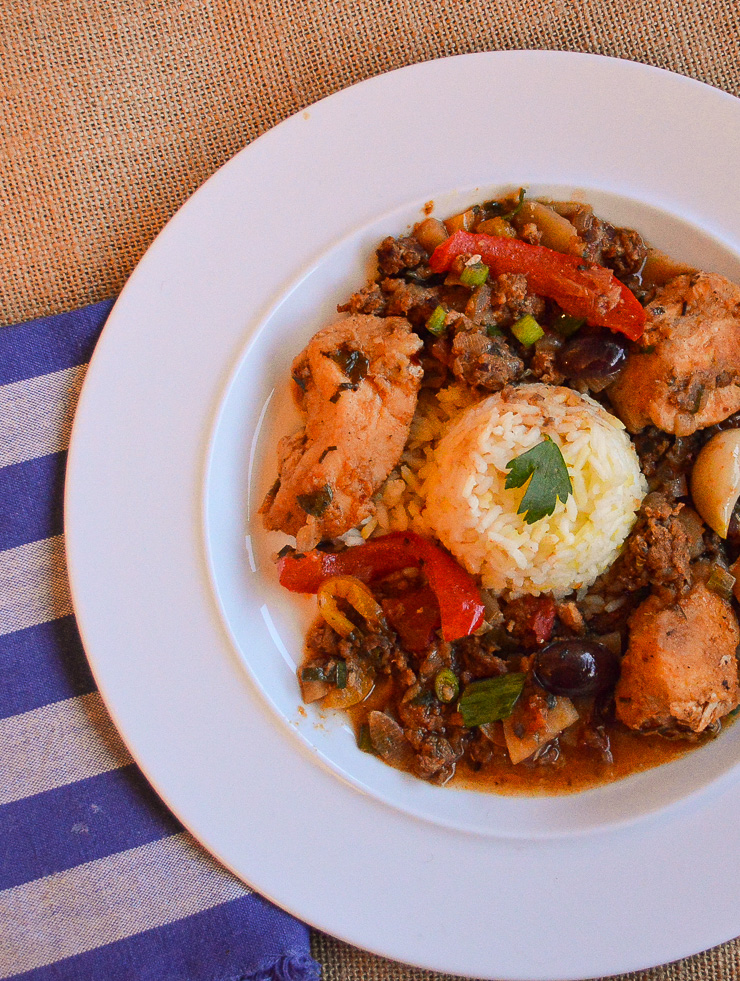 Never heard of a French oven? Well, either had I.

Apparently a French oven is the same as a Dutch oven, except that it has an enameled interior.

Imagine my surprise when I went to the Le Creuset site and found out that a Dutch oven is just a cast iron pot used for cooking over a campfire.

A french oven, on the other hand is a cast iron pot with a perfectly domed lid, that helps to keep the interior of the pot warm and steamy.

It is twice coated with the highest quality enamel and can be used right out of the box. No need to season it as one would have to with cast iron.

OK. I own both.  One I bought to make my 24 hour bread in and my Ilse’s potato kugel.

The French oven came to me courtesy of a very nice mother who bought it for me for Hanukah last year. I am a lucky girl.

How I lived without this all these years is beyond me. Hard to believe that the French oven comes with a lifetime guarantee.

Shoot, I wish I came with a lifetime guarantee.

With Portuguese chicken on the menu, my French oven came in very handy.

Last week when picking up my son from the airport after his NY trip, I needed something simmering on the stove.

My son immediately noticed the gorgeous, very deep blue, sexy FRENCH oven on the stove and asked me why they cost so much. 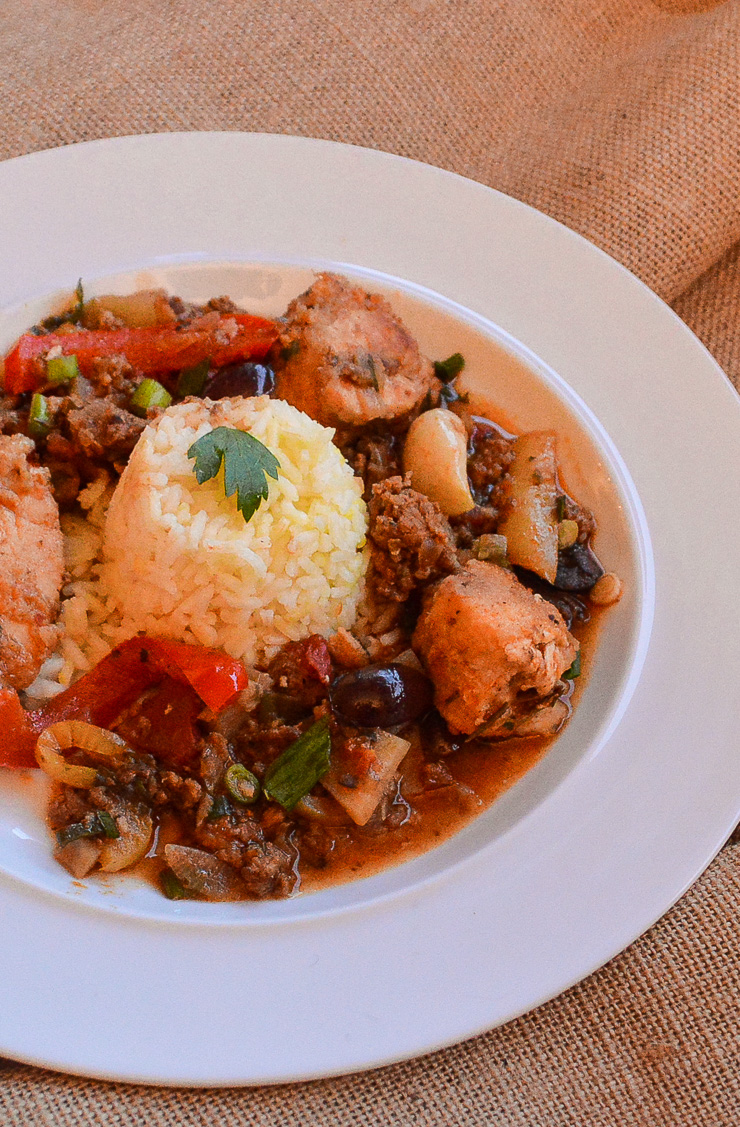 Does using a high quality Dutch oven make a difference in cooking?

This child who just came back from Russ and Daughter’s and Momofuku was wondering. And really, it is a good thing to wonder about.

I mean who wants to shell out several hundred dollars or more on a Dutch  French oven. (Thank goodness, my mother does.)

After 30 years of cooking in an aluminum dutch oven shaped pot that I bought back when I worked at the Kankakee County Courthouse, when a salesman was going office to office selling a set of brown aluminum yucky pots and pans, that at the time I was so proud of; yes this new Dutch/French oven cooks so much better.

Nothing burns or sticks and when a recipe calls for simmering, it simmers and doesn’t boil.

Yeah, son. That French/Dutch oven does make a difference. I LOVE IT!

And best of all, if I drop it, it has a lifetime guarantee. Unfortunately my floor does not.

So all brides out there. Get one. You will use it for the rest of your life and still be able to put it in your will.

When your lifetime guarantee expires you can bet your children will fight over it.

It is worth every penny and even more since I didn’t have to pay for it! Thanks, Mom!

Now it’s 9 years later since I originally wrote this post and I must say that my beautiful blue Dutch/French oven still looks gorgeous.

And this Portuguese stew is still a great recipe!

This post contains affiliate links of which I may or may not make a small commision at no cost to you. 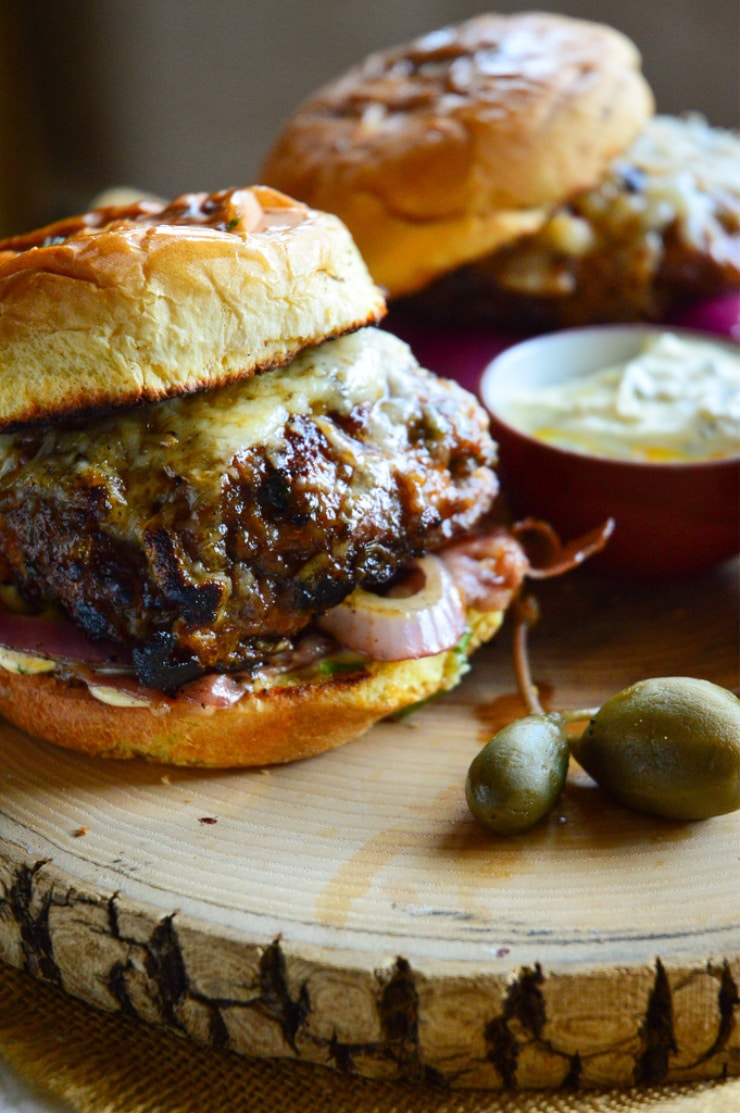 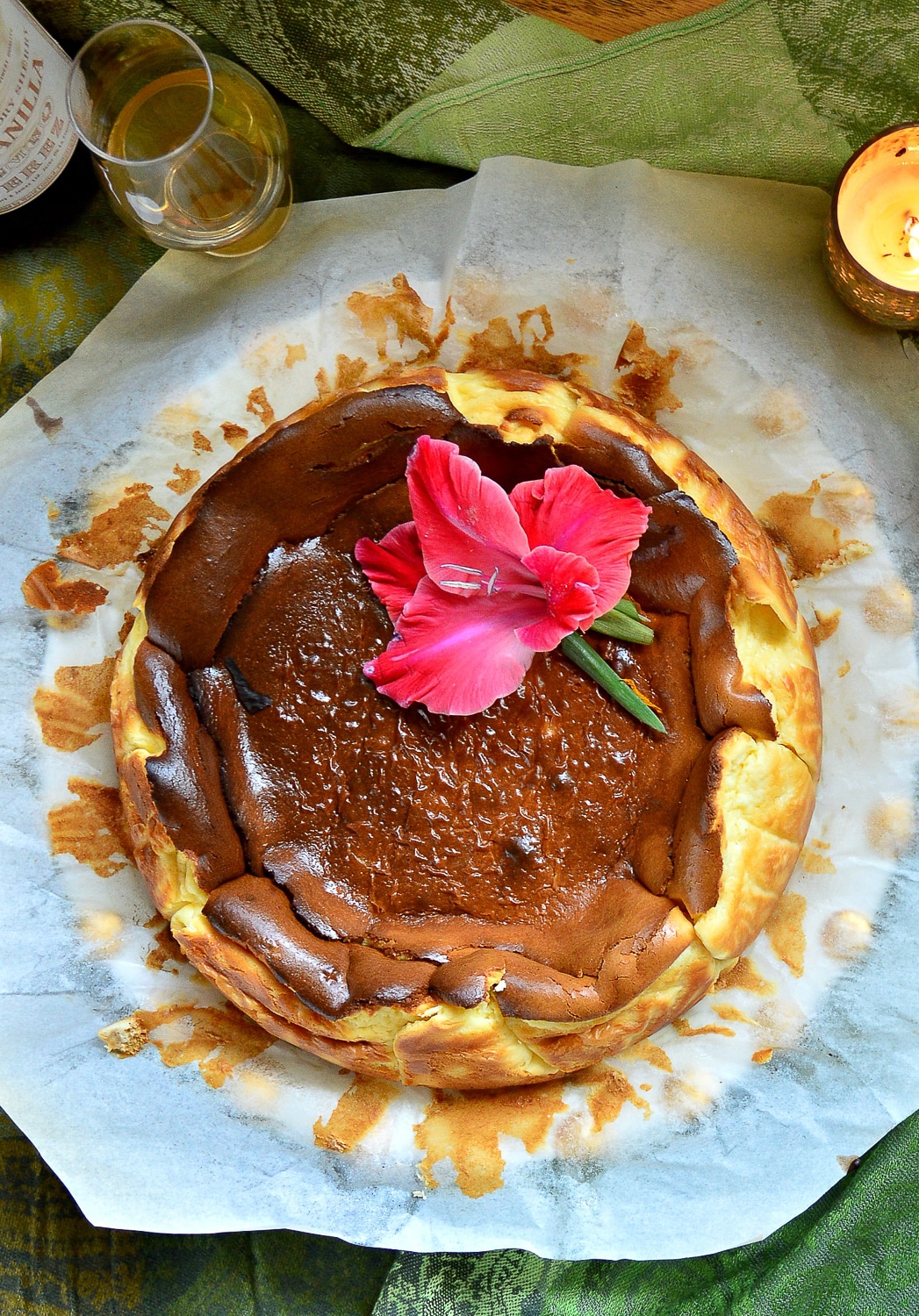 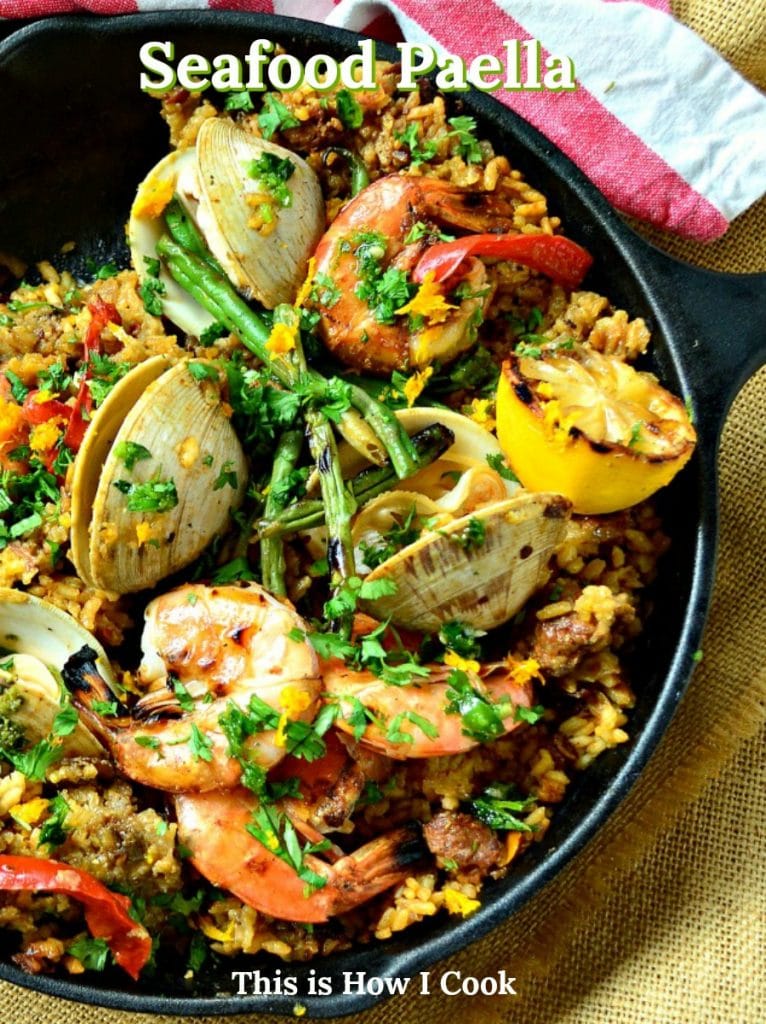 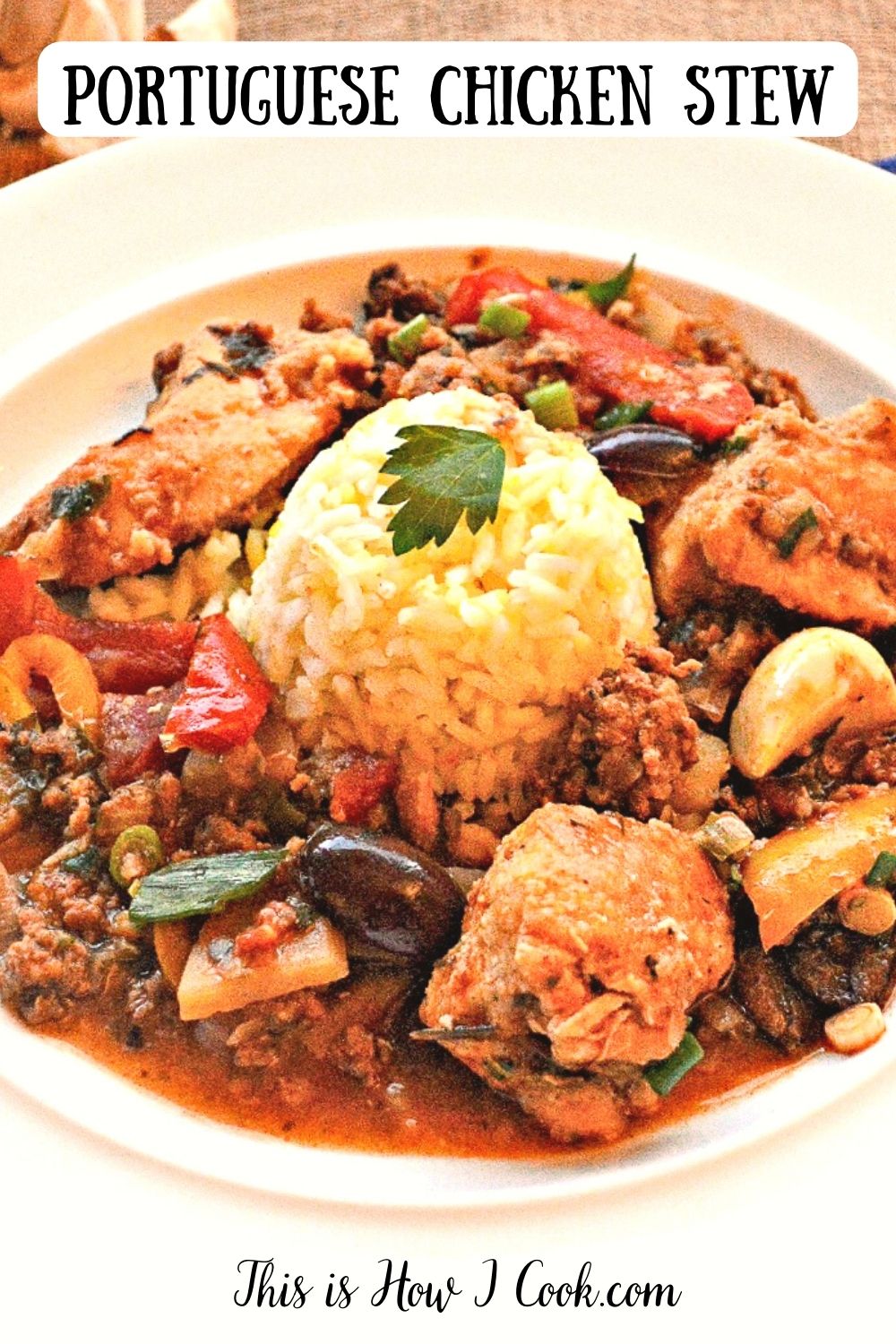 Salt and plenty of black pepper

Combine seasonings and flour in a zip lock bag. Add cut up chicken pieces and coat well with flour mixture. When the oil is hot, add the chicken and sear until golden brown on each side. Remove chicken from skillet when brown (It is best to do this in two batches as crowded chicken takes longer to brown.)

Add chorizo and brown while  adding onions, potatoes and peppers. Cook for about 2 minutes, stirring a bit.

Stir in wine or port or sherry, chicken broth, parsley or cilantro and capers. Add back chicken.

Bring liquid back to boil and reduce to a simmer. Cover and simmer the chicken and vegetables about 45 minutes.

Mound the rice in center of plate. Arrange chicken around rice.  Serve with good bread for dipping.

Wow! Does this sound like a terrific, flavorful stew.

Oh dear! We love chorizo everything! It heals every pain! :-)

What a hearty and flavorful stew! Love the amazing mix of ingredients. All those flavors in one bite would be a mouthful, that's for sure. A beautiful presentation for a delicious dish.

This dish has Sunday Supper all over it. Love dishes like this, that are soulful and comforting. Thanks for sharing this dish with us.

I love how it turned out...flavourful, homey and so comforting! No wonder you are happy with what you have found, Abbe.

You would love it too, Angie!