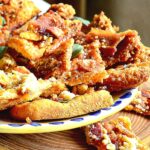 This bacon appetizer is made with crescent roll dough. So many versions one could make but we prefer this brown sugar pepper bacon or the fig jam and goat cheese version. Either one disappears fast! 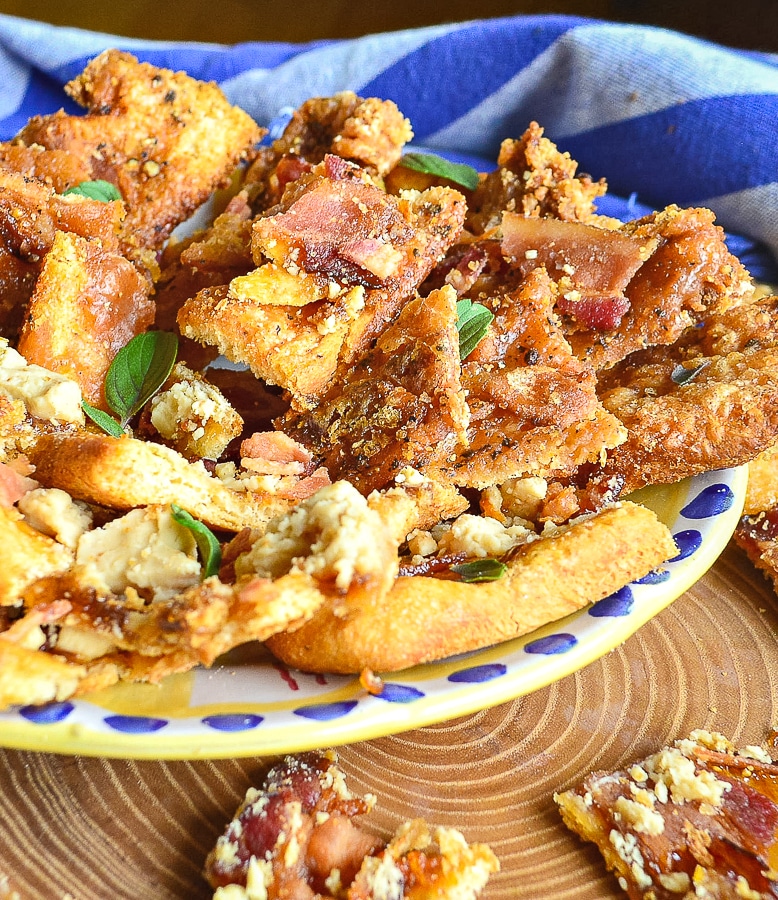 I love appetizers with bacon and these crescent roll appetizers do not disappoint.

It may be hard to tell from the photos, but I did two versions of this bacon appetizer.

One is with maple, black pepper and brown sugar which is almost like I make my breakfast bacon, except I skip the syrup and just use a brown sugar and pepper rub.

If you have folks that aren’t in love with a bit of pepper, the version with jam is the one for you. However you could leave the pepper out and still have something crave worthy!

The other option to top the crescent roll dough is fig jam, bacon and and blue cheese, goat’s cheese or feta, which is just as popular with the folks I serve! Just don’t forget the orange zest!

Another option with that version would be to use apricot jam or orange marmalade and then top with bacon. So many ways you can do this! 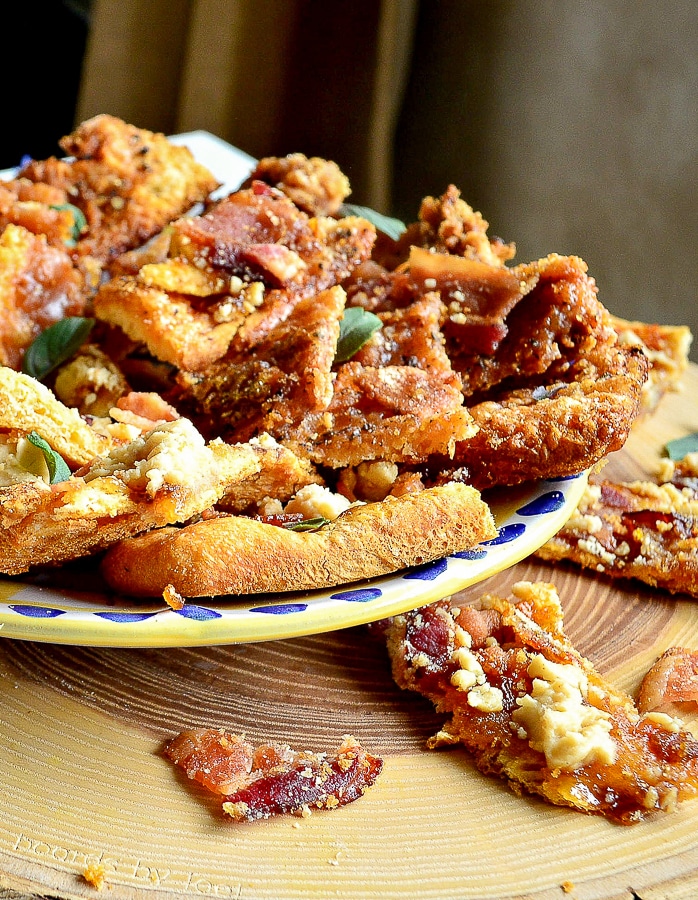 Crescent roll appetizers are some of my faves, because it’s so handy to keep a tube of crescent roll pastry in the fridge to take it out when needed.

How to Make this Bacon Appetizer:

This bacon appetizer begins by precooking chopped large pieces of bacon to let some of the fat render off. The bacon then finishes cooking while on the dough.

There are many ways to fry bacon, but for this recipe-since it is chopped into large-ish pieces, I do it in a skillet on the stove.

If you want to cook it in the microwave, cook it in slices first and then cut it into large pieces.

It does get good and crisp after baking on the pastry, which is exactly how I like my bacon.

Then it’s a matter of popping open the tube of dough and spreading it on your baking sheet. No need to roll it to make it larger, but do press the perforations together.

Now it’s a time to decide what version you want to make, but if you are indecisive like me-just do both! 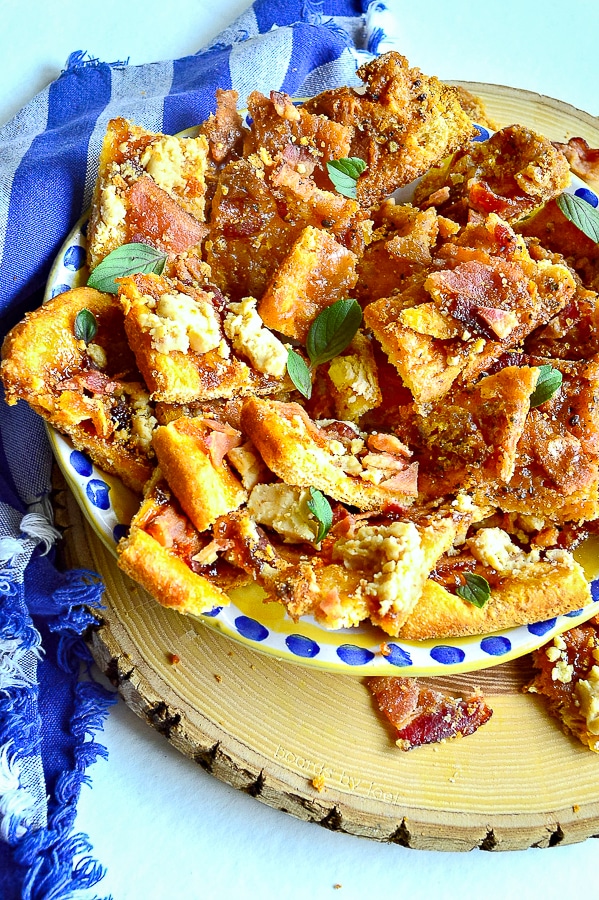 Follow the directions below and spread either the syrup or jam on the pastry. And from there I’d say, “see the recipe below!”

I detested bacon as a kid, because my dad always fried it up soggy. He liked things with fat and always ate the fat trimmings off my steak, which is why, I guess, he liked bacon not so crisp.

Give me crisp, well done bacon in any form, and my eyes light up.

Before I left for China I was invited to my friend’s 100th day party to celebrate her successful bone marrow transplant. So far, so good and though she isn’t over the hump yet, it still spells happy!

Being a bacon lover, I brought bacon appetizers and these bacon crisps were a hit.  It’s hard to say which was gobbled up first, but needless to say there weren’t any leftovers.

Given that football season is upon us, I do believe these would be winners in anyone’s play book. 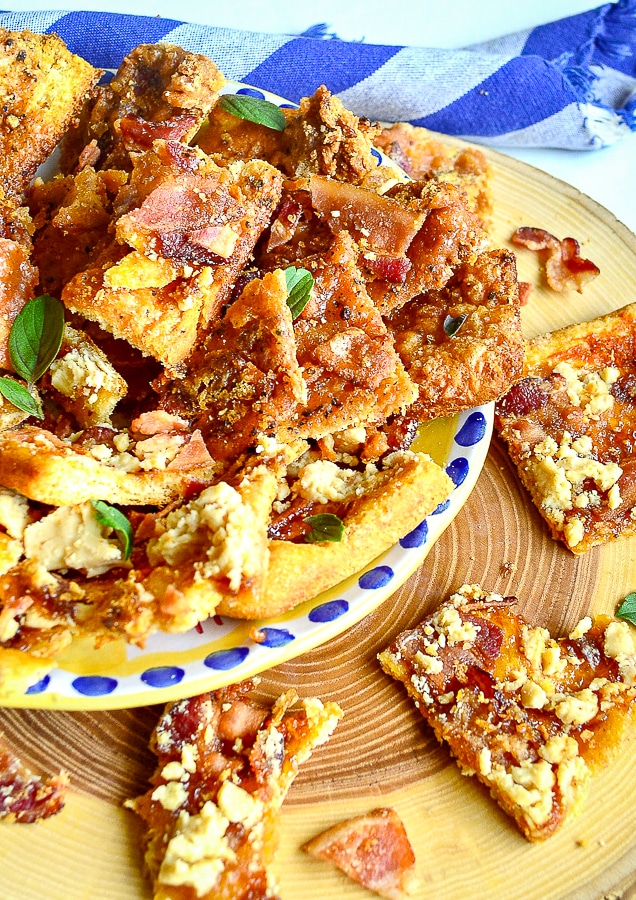 This is an updated post from October, 2016. The China part of the post has moved to a new page and will soon be updated! 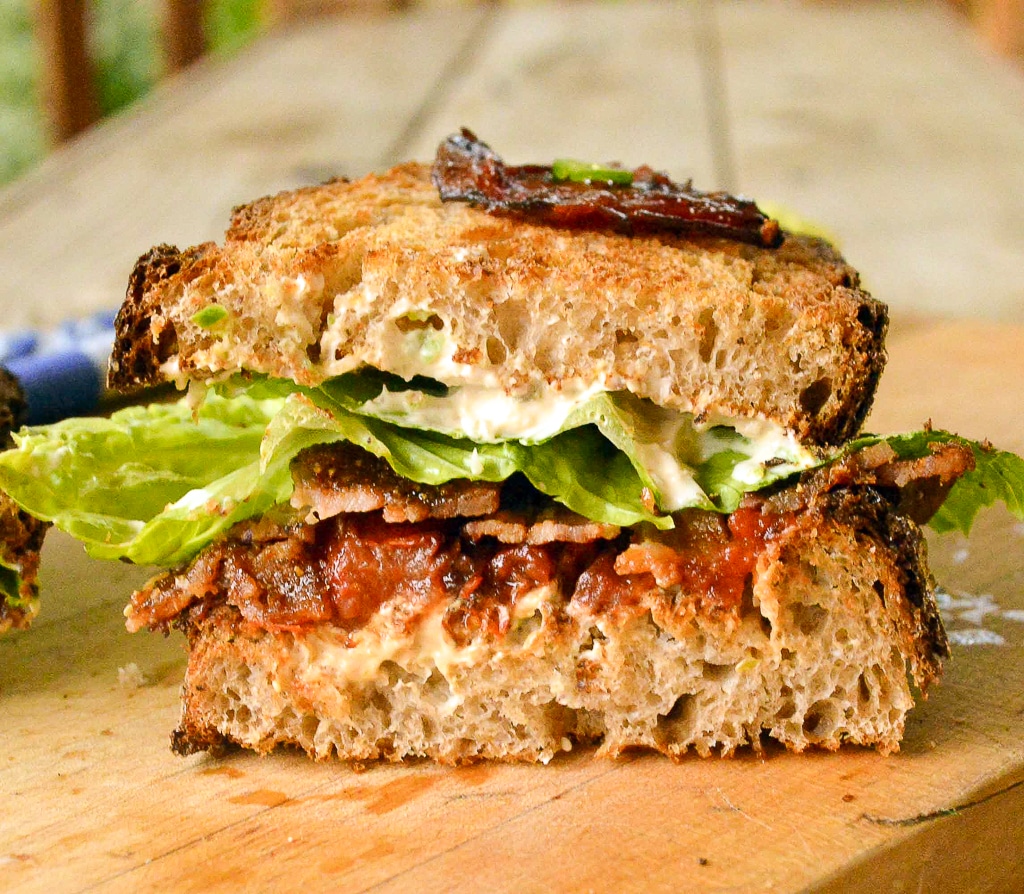 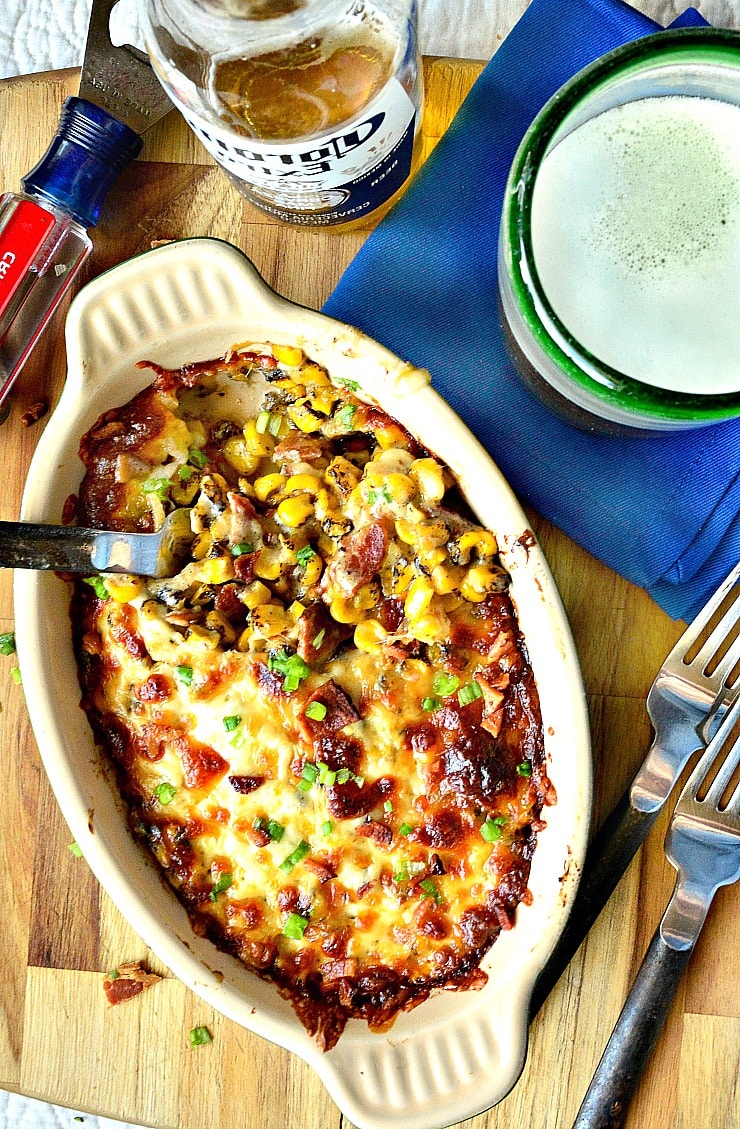 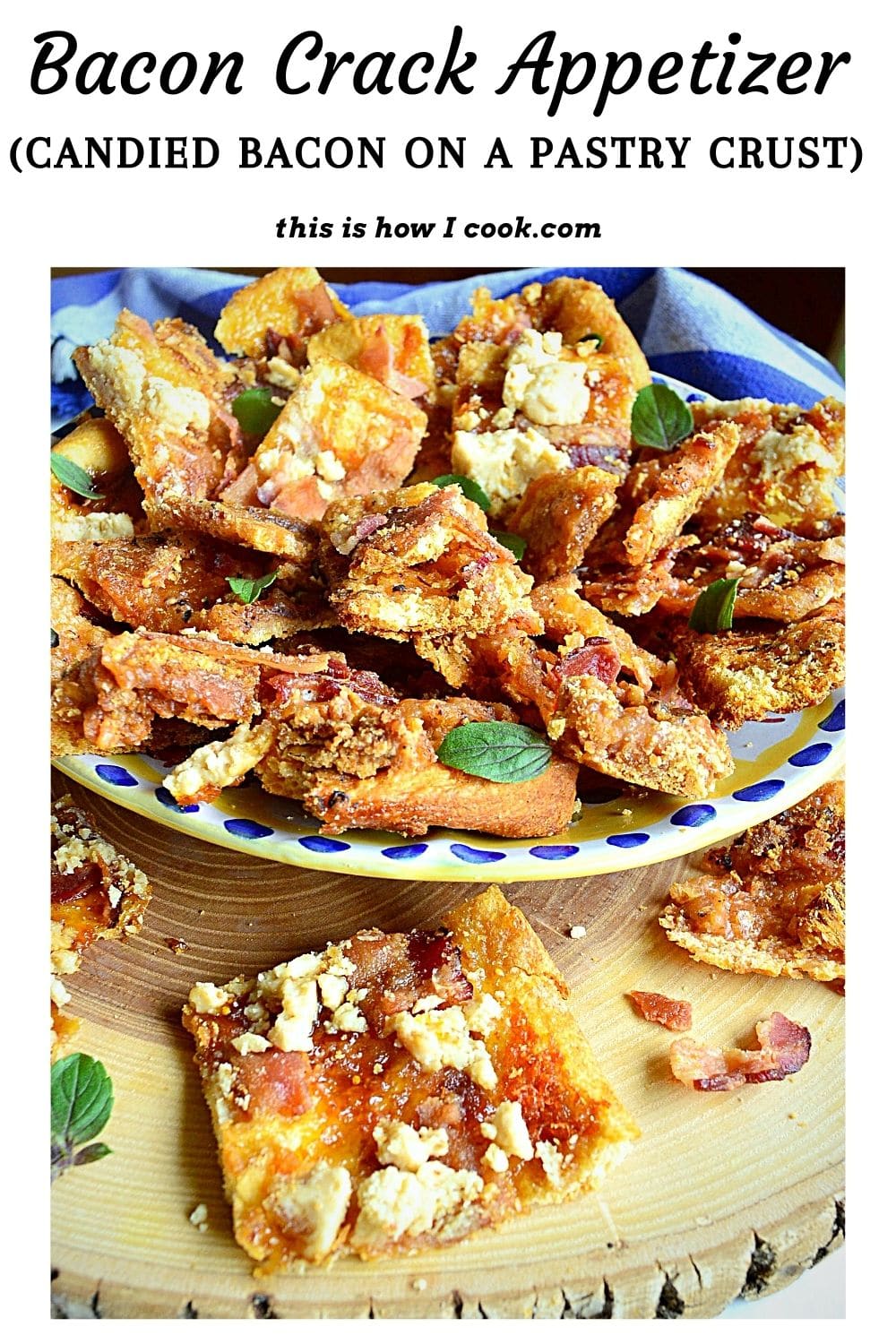 Some people call this crescent roll appetizer, bacon crack. I just call it good. Make up your own version, but we love both of these!

1 lb bacon, chopped and cooked until just about done (6 minutes, approx) and not quite crisp. It will finish cooking on the pastry. Drain well.

3/4 c brown sugar, divided in half

Preheat oven to 325. Line 2 15 x 10 pans with foil or parchment and grease well. Unroll dough and stretch to fit pan forming a small crust around the edges. Prick the dough with a fork. (If using crescent rolls, pinch seams to make one single sheet.)

For the maple bacon version:

Drizzle 2 T of maple syrup on top of one sheet of pastry.

Mix the brown sugar with paprika and pepper. Sprinkle sugar mixture on top of syrup, doing your best to cover pastry evenly. Top with 1/2 lb of  partially cooked chopped bacon and drizzle with remaining 2 T of maple syrup.

Bake for about 25 minutes or until crust is golden and bacon is crisp and topping is bubbly.

Allow to cool before cutting or breaking into pieces.

Fig Jam Version:
Top crust of the second pan by spreading fig jam evenly over pastry. Place torn bacon on top of that.

Bake 15 minutes, then add the goat’s cheese or blue cheese and bake for another 10 minutes.

Grate orange zest on top and let cool before breaking or cutting into pieces.

This sounds wonderful, and I love all of your creative options. I just popped over to the corn cheese and bacon dish. Oddly enough, I’ve made another Korean dish with mozzarella!!!

What a wonderful tour, Abbe, and it included Peking duck?!?!?! Wow! Those carved statues were huge! When I'm standing in front of something like that, I'm struck at the amount of manual labor that was needed to create just one, let alone the entire temple, edifice, or whatever. Amazing! Thank you so much for taking the time to collect, organize, and annotate the photos for us.I visited a Buddhist temple last week as part of a tour of our Chinatown. The multi-armed figure is, in the Chinese Buddhist tradition, called "Guanyin". She is the "embodiment of the compassion of all Buddhas". Many of the images of her show a different implement held in each hand, signifying the many ways she will assist us along the path to Enlightenment. (Who-da-thunk I'd ever repeat that bit of info?) :)

The bacon crescents sound and look wonderful - but the trip to China photos is my favorite! I love exploring the world and this looks like a unique experience!

Great photos Abbe...indeed amazing...sorry you did not get inside Forbidden City...hope you get a chance to visit China again...and no doubt...only crispy bacon for me.Have a wonderful week :)