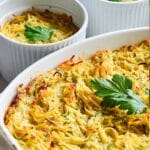 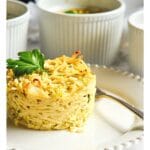 A wonderful side dish, this parve, zucchini kugel with fine egg noodles, a touch of Worcestershire and mustard with a hint of sweetness from apricot jam, is perfect for end of summer dining! 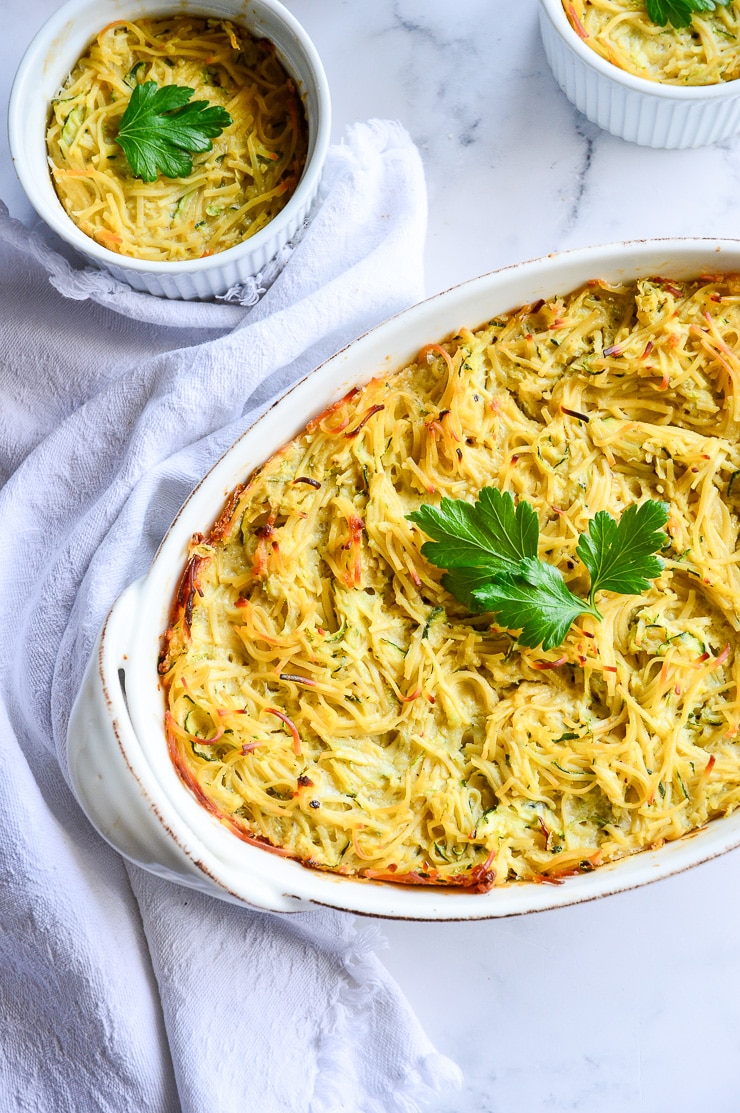 I know I just posted a zucchini bread but it’s high time I give you a different kugel recipe than “Not My Mom’s Noodle Kugel!”

That is one great recipe and with Rosh Hashanah approaching quickly and so much produce in my garden, this summery, light zucchini noodle kugel make a great side dish at your holiday meal.

This parve kugel recipe could also be prepared with shredded carrots or squash, in my opinion and I think it would be equally tasty.

If you follow Jewish dietary laws and keep kosher, than you would know that mixing dairy foods with meat is prohibited.

Therefore many Jewish recipes use margarine or oil instead of butter so they can be served with both meat and fish.

This kugel recipe is made with olive oil and contains no cheese or butter. Therefore one could serve this kugel with any main course. 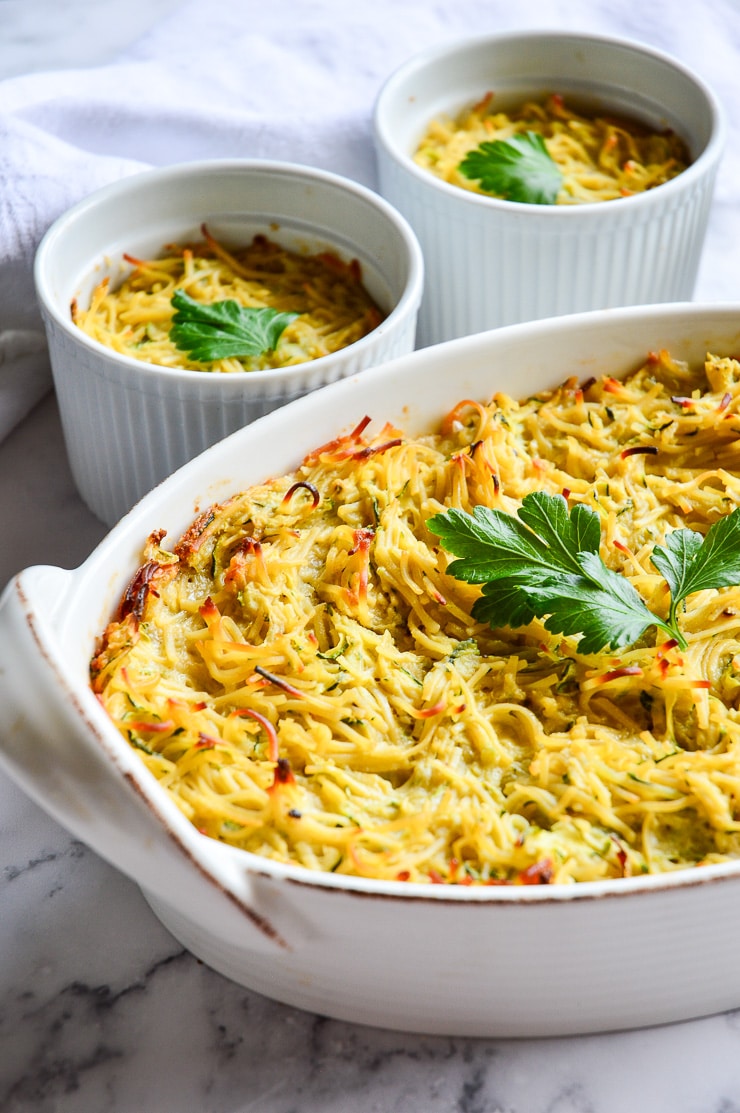 What are the different types of kugel?

Kugels are most commonly made with noodles and potatoes.

They can be sweet or savory, served as a side dish or a dessert.

Most kugels are made with wide egg noodles but this one is made with fine noodles, which blend nicely with the zucchini shreds.

Kugels  are believed to have originated in Germany and there are many versions.

I have three potato kugels on This Is How I Cook and one sweet-ish noodle kugel that is made with cottage cheese, sour cream and  cream cheese.

Though kugels are often served as side dishes to the star brisket, they are also superb served with fish or chicken.

Kugels can also easily be the star of the meal when served with several hearty salads on the side or even a cholent.

Believe it or not, a sweet kugel is often served for dessert in many homes. Think of it- not much different than serving rice pudding! 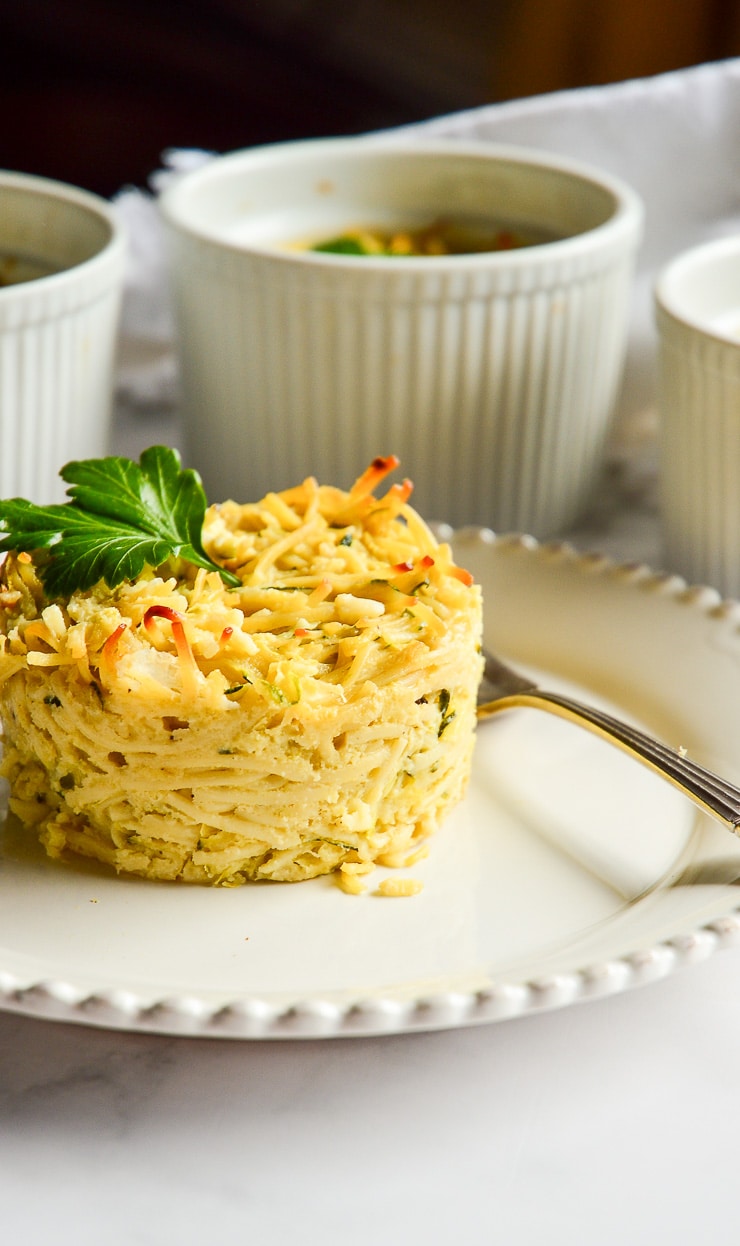 What to do with leftover kugel?

I have been known to reheat a slice of kugel in the morning and serve it with jam on the side, which makes a kugel one great breakfast.

Serving potato kugel? I often chop leftovers into big chunks, slice up some onion and refry it with oil. Oh my. What a great breakfast that can be served with a fried egg on top and even a slice of grilled corned beef or pastrami.

This zucchini kugel caught my eye because Rosh Hashanah seems so early this year.

I’m not quite ready for full on Fall food, so adding zucchini to a noodle pudding seemed perfect!

I’ve never had a noodle pudding that is the consistency of pudding, but kugels were originally steamed, just like a pudding, so that might be where the term pudding originated. 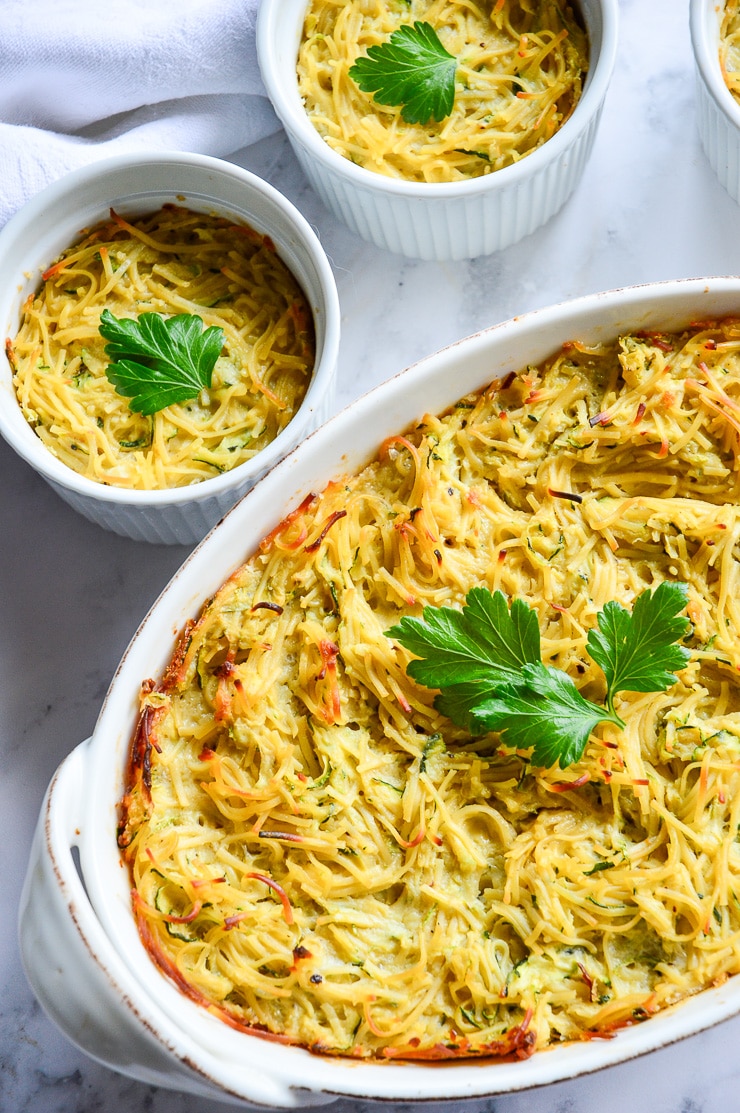 Making a kugel is really simple. Begin by combining your eggs, oil, flour and other seasonings in a large bowl. Whisk well.

Stir in the shredded zucchini, cooked noodles and onions and bada bing-bada boom-you have an unbaked kugel. Really how simple is that?

Spoon or pour mixture into the prepared baking dish and then bake until crispy and golden on the edges and top.

I love making kugels as they are such a traditional Jewish dish. If I don’t eat all the leftovers, I often cut the kugel into slices and then freeze. That way when it’s just Manservant and myself, I always have a great side dish.

If you have never tried making a kugel, the time is now. Take your pick from any of mine. They have been tested over many years!

And if you love kugel, spice things up a bit. Adding veggies is one great way. This zucchini kugel was a hit with everyone I served it too! 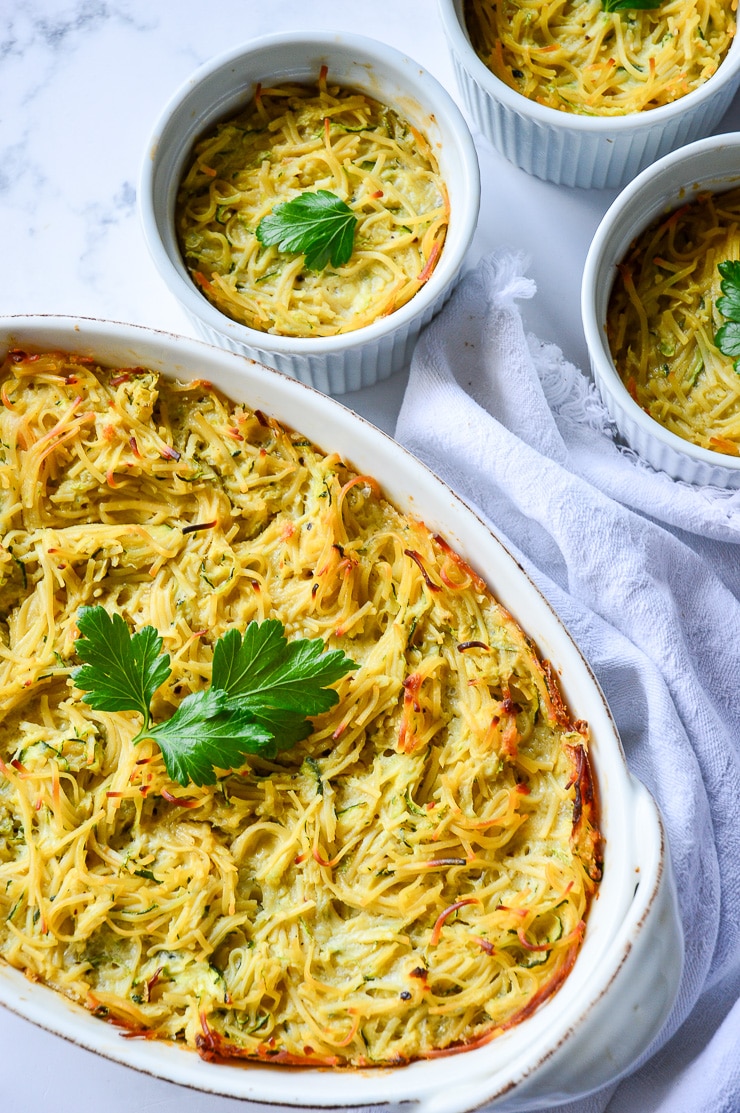 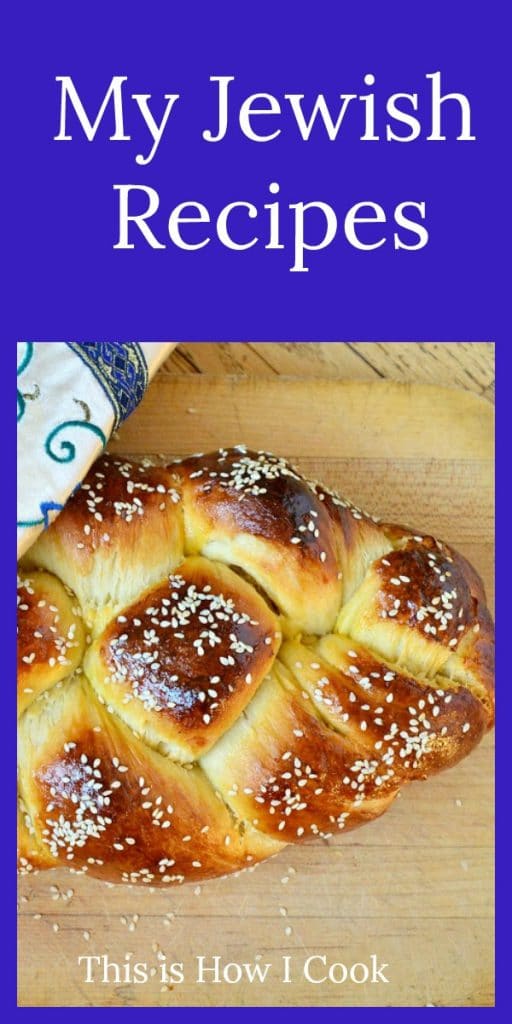 Honey Cake with Whiskey and Pecans 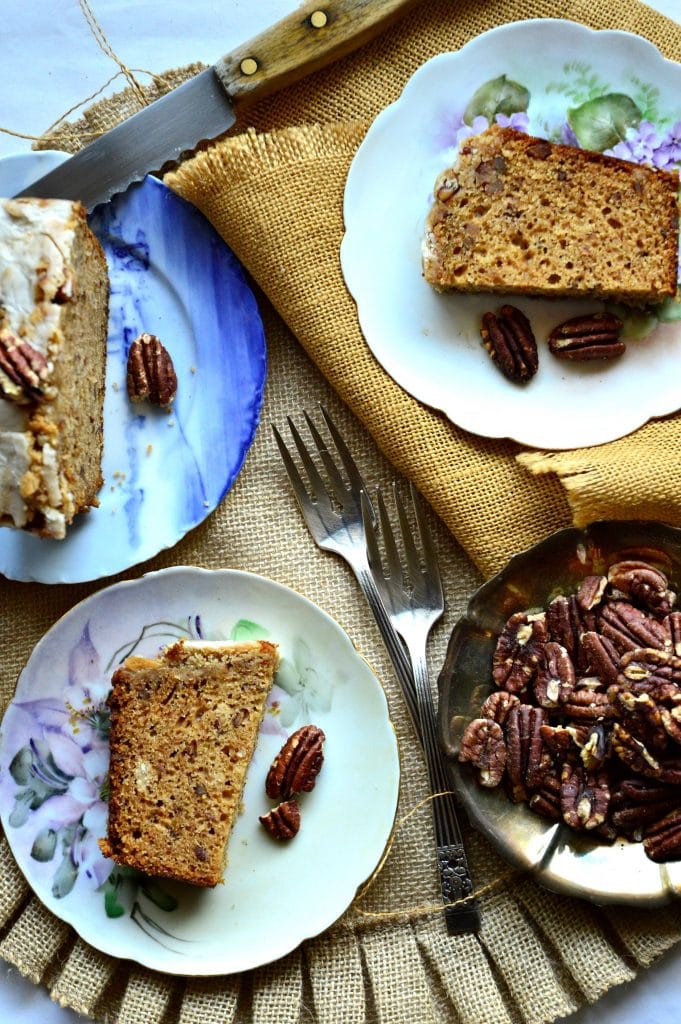 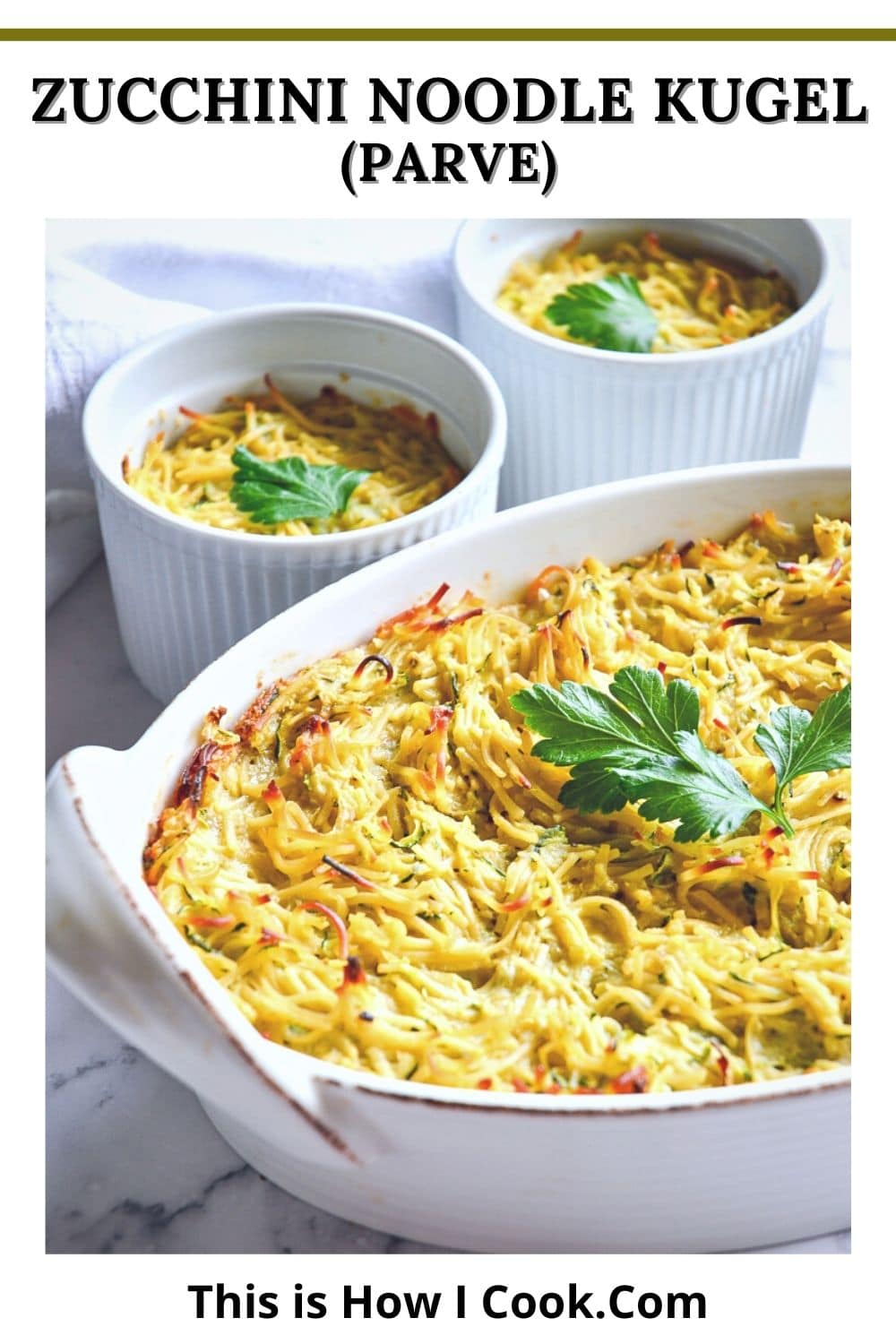 This take on noodle kugel is a great change from potato or the standard noodle pudding. I love using end of summer zucchini in this!

3 medium zucchini, grated on the medium holes of a grater

1 medium yellow onion, grated on the medium holes of a grater

12 oz fine egg noodles, cooked according to package directions- but cook to the lower time on the package

Add the zucchini, onion and noodles and mix until noodles are thoroughly coated and combined.

I made an 8 x 10 oval kugel and baked that with 4 ramekins. I served the ramekins and popped the baked, cooled oval out of the dish, wrapped it well in foil, and plan on reheating this thawed, rewarmed kugel back in the dish for Rosh Hashanah.

*Thanks Modern Menu and Kim Kushner for this fun recipe.

I have to admit that I've never had a kugel before. Shame of me! This looks unbelievably delicous and I love the hint of sweetness with the peach preserves. And those individual servings would certainly make a fancy meal. Love this!

Everyone loves individual servings and they are fun! If you ever get to Denver, I'll make you a kugel!

This is fabulous! Apricot jam? Interesting. But it looks wonderful!

It is good! And the apricot jam just gives a hint of sweetness, which works well in this savory kugel.

Love this idea! Great way to use up the zucchini but also very satisfying and hearty. I bet leftover are even better the next day.

You are right! it does taste better the next day!

this looks so tasty Abbe, and i love your idea for serving leftovers as breakfast. Delish!

Thanks Sherry. I hate food going to waste!

This looks yummy. Loads of flavor, and a great way to use all the zucchini I keep buying. Great dish to serve to vegan friends, too. Good stuff -- thanks.