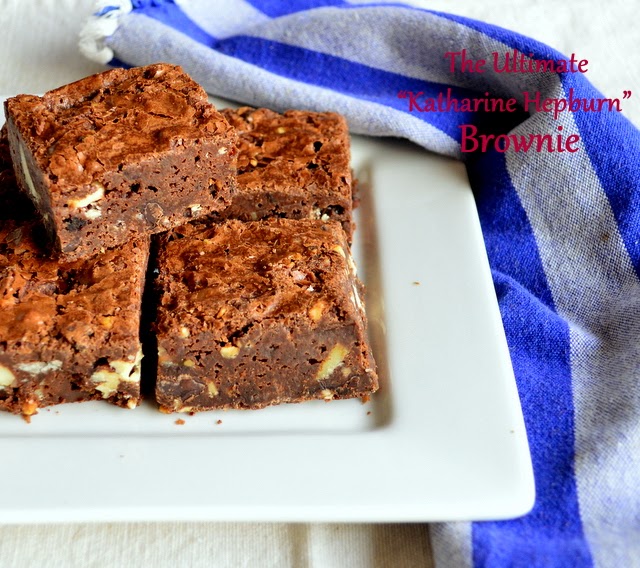 Holy Moly! I’ve deserted you again. But I’m back; at least for awhile. Phoenix called and wanted everything removed so they could actually park in a garage again. That is what a garage is for, according to some people. So back to Phoenix  I went and this time with Manservant. And this time he really was. A Manservant, I mean. We finally rented a U Haul to transfer some of their belongings to other worthy homes, such as my brother’s and mine. And in all fairness this only took about a month since they settled, so I think we did it pretty quick. 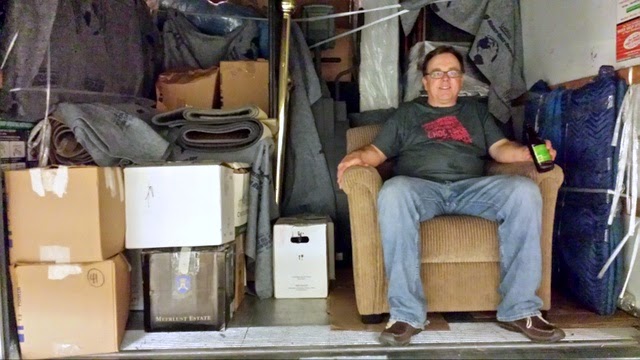 This did involve going into four different storage areas plus the said garage, so coordination was required and I’m happy to say all went smoothly even though my parents didn’t know where their stuff was being stored. Luckily someone did! IDR moving was great and if you are ever in the Phoenix area and need a mover, they are spectacular. They moved my parents and they helped pack our U Haul, which I was sure wouldn’t hold everything; but it did. 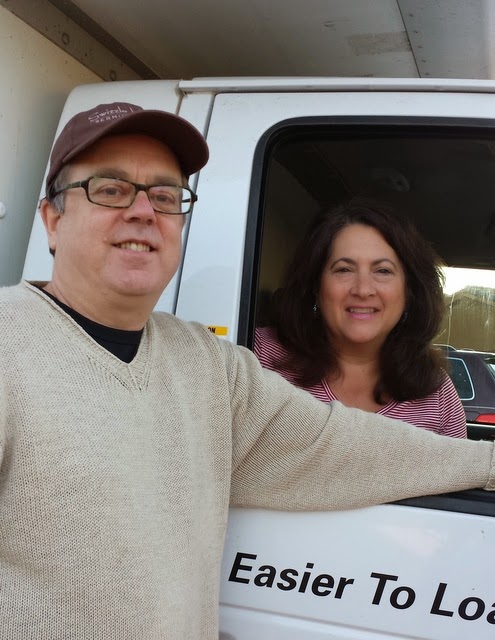 We arrived back in Denver by way of Santa Fe, which is one of my favorite places in the WHOLE WIDE WORLD. Always stop in Santa Fe whenever you can. It has been way too long since I’ve been there. 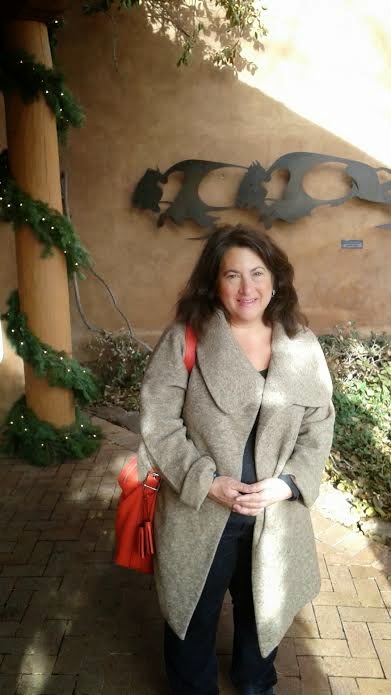 Before arriving there we traversed New Mexico and stopped in Pie Town. We had just seen this two cafe town featured on a CBS news morning show which declared that there were always pies in Pie Town. 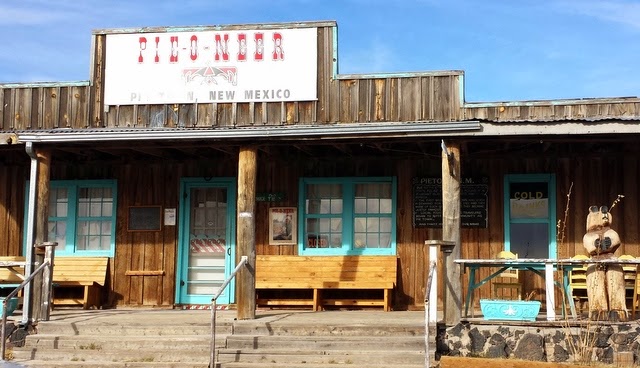 Clearly CBS news didn’t get their facts straight. There were no pies in Pie Town on Friday. We drove an extra 40 minutes to discover this. We even Googled before we went.

After saving my appetite for pies, I was greatly disappointed. Both cafes were closed. CLOSED! So now I am really in the mood for baking a pie. For 300 miles we were discussing what flavor of pie we would get. What a bummer. Holy Moly. But right next to Pie Town were these windmills. I have no idea what they were doing. But they were cool. 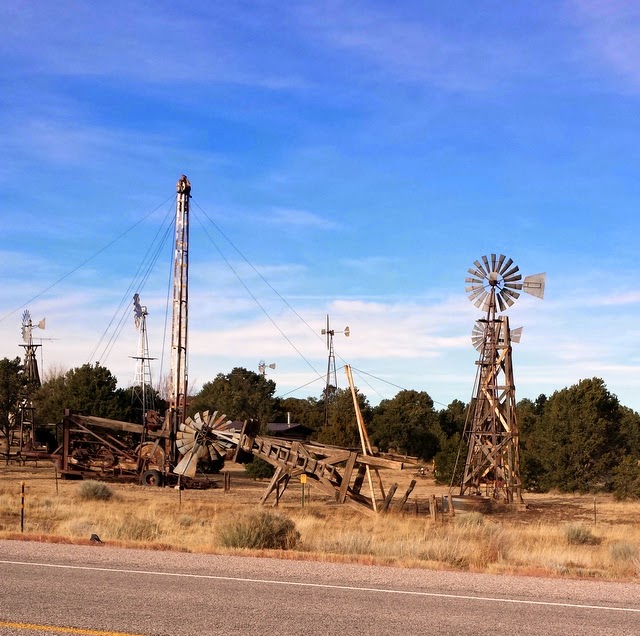 And then we discovered this VLA (Very Large Array) telescope site that Manservant says is for listening to see if there are really signs of life in the outer universe. I am sure they heard us talking about the lack of pies in Pie Town, though. 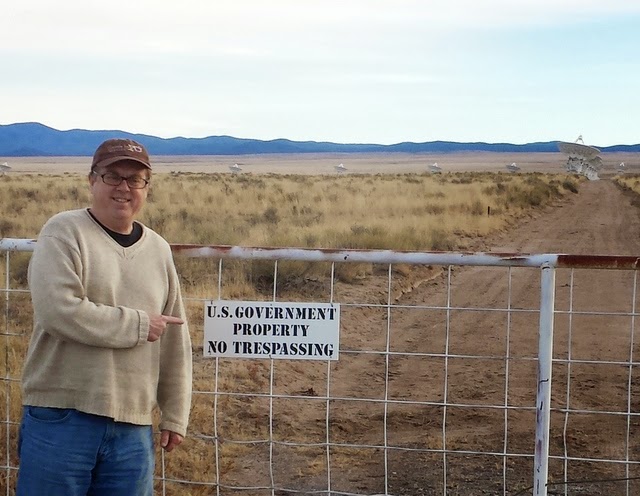 So, Holy Moly. I now have a garage of stuff. I feel like a kid in a candy store. We brought home a king size mattress set that had only been used in their guest house, which means that we were probably the only ones that slept on it. So yesterday we moved out our mattress of at least 27 years (kind of gross, huh?) and put on this one and I slept like a baby last night. My back feels so much better. And a word to the wise. It is not fun being 5′ tall and moving two sets of mattresses with a Manservant who is 10″ taller. But we did it. What a team!

I also have assorted boxes and some new old cookbooks.I have a new kitchen table and a few pieces of furniture. Not too much, but enough that I need to rearrange to figure out where to put it. The truth is that I love decorating!  And pillows. My Mom had tons of pillows of the “put under your head variety” filled with sweet, soft down. Now Zoe can have a new pillow when she gets home! And we have the elephant that I always wanted. The story is told that on my parents first trip to Hawaii my father carted him home by carrying him onto the plane. Imagine doing that now! 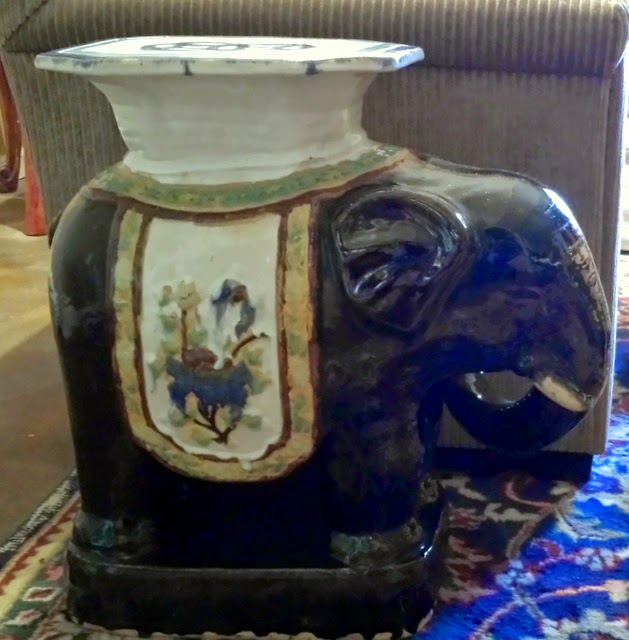 We also have various items of artwork and they will wish they gave us more because they do not have enough wall space to put it all on, but that is now their problemo! I do now have this great piece that my mother did. Kind of reminds me of New Mexico and Colorado, and I’m not sure she knew I took it. I love it, Mom! 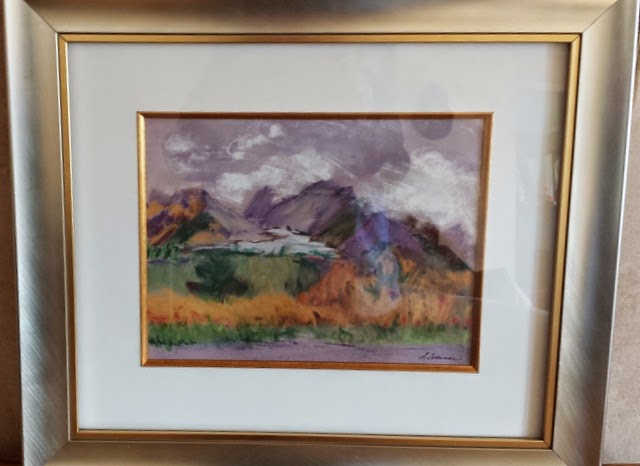 And last but not least-we have wine. Cases and cases of wine. So much wine that we had a wonderful 2006 Syrah with our Smashburger last night. Maybe that’s why I slept so well… My mother bought wine like she buys shoes. We have 10 cases of fabulous wine that needs to be drunk now. Yes, mom was apparently quite a prolific buyer about 15 years ago. Luckily, she has great taste and now we are the proud owners of everything she couldn’t drink. How we are going to drink it all is beyond me, but we will sure give it a good try. Holy Moly.

So now here I am. I’ve been going crazy because this is the time for blogging. This is the time when everyone is looking for the next great recipe to feed their family during these festive holiday weeks. And I have been absent. ABSENT. And I have a lot more to do now than cook. But just like I’m going to give it a fighting chance to drink that wine, I’m going to try to give you lots of great things to eat! 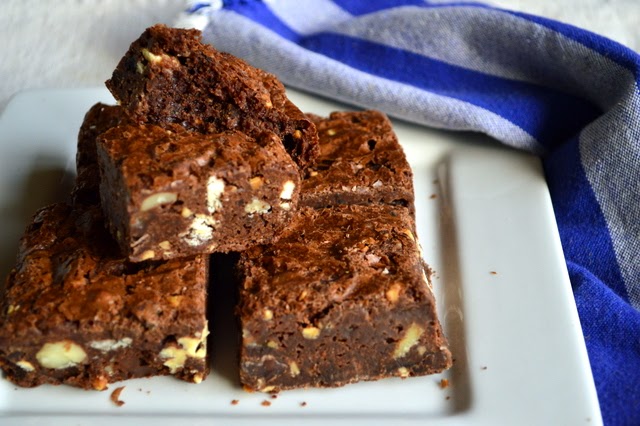 Let’s start with brownies. I have a hard time deciding between brownies and chocolate chip cookies. Brownies are great when you don’t have time to wait around between baking trays of cookies. This is one of my favorite brownie recipes of all time as it is fudgy and full of chocolate. The texture is gooey and dense and totally worth going off your diet for. Oh. I forgot we don’t diet over the holidays, do we?

I load these brownies with all kinds of goodness, but they are also great just kept simple and plain. Toasted walnuts though are superb for texture and taste. Yes, these are attributed to Katharine, and I admit to loving anyone who is an alumna of my daughter’s alma mater. I however, baked these long before my daughter chose Bryn Mawr to attend for college. Who knows? Maybe they subliminally pointed they way. Holy Moly. Just bake the brownies. You won’t be sorry. 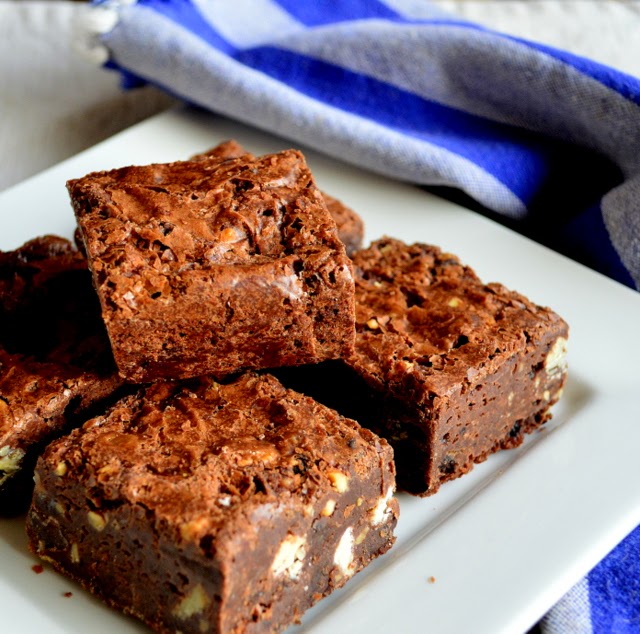 The Ultimate Katharine Hepburn Brownie
16-32 servings
Time to prepare: About 15 minutes Time to Bake: About 40 minutes

Directions:
Preheat oven to 325. Butter and cocoa a 13 x 9 pan. Melt chocolate with butter either in a microwave or on stove. Remove from heat and stir in sugar. Stir in the eggs and vanilla and mix until smooth. Stir in flour, salt and nuts and mix. Add other optional items at this point if you want. Spread these into prepared pan. Bake about 40 minutes or until a toothpick inserted into the center comes out with a few fudgey crumbs stuck to it. Don’t over bake. Let cool before cutting.

Oh, and I almost forgot. The winner of the Whole Foods giveaway for November is: Priscilla S!

What an adventure! And no pie in Pie Town. Good Heavens Batman!!!! 10 cases of wine---TEN. I am sooooo envious. You are a wonderful daughter!!!! Love the brownies and the name of them.

You really need to do a story about Pie Town Carol! Regarding the wine. We don't know where to start.Manservant is actually looking it all up so we know what we have drunk!

Wow, what a haul. I'm most impressed by the wine and your mother's art work :) Well a new mattress would be absolutely welcome in our home also!

Mom will be happy to hear that. And she is quite prolific, so if you are interested.... Why did it take us so long to realize we needed a new mattress?

Katherine Hepburn is one of my family heroes, she is so amazing :DAbbe these brownies would definitely honour her awesomeness in the most delicious way!

Welcome back to blogging! Your ultimate brownies looks truly ultimate... It is a sweet beginning after all the travels and move :D

Thanks Zoe! I always love to hear from you!

I could use a new mattress and a glass of wine, and movie star brownies too. GREG

The mattress is amazing Greg~ Totally made the trip worth it. Well, that and the wine!