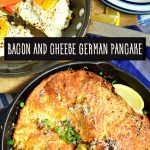 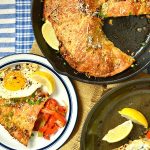 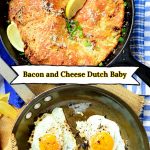 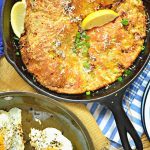 This savory German pancake, Dutch baby filled with bacon and topped with parmesan cheese is a great way to start the weekend! 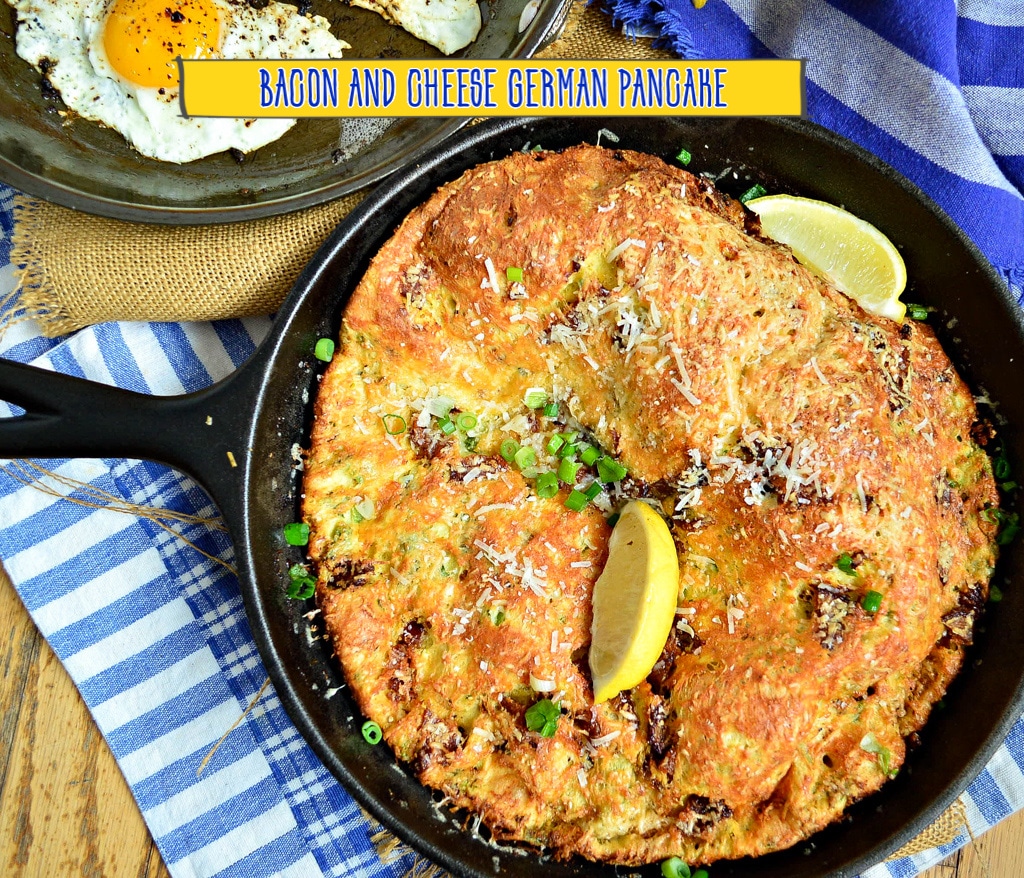 I love German pancakes or Dutch baby’s, as they are sometimes known. Some might think of this airy, giant pancake as giant a popover or Yorkshire pudding, because they really aren’t that different.

My grandmother apparently used to make German pancakes, though I never was there when she did. Somehow I missed this and never ate one of these fluffy, giant, oven pancakes until I made my own.

When The Original Pancake House arrived in our neighborhood their famous pancake is a German apple pancake and a lemon Dutch baby. If you are lucky they will bring you one out free. Since they take so long to bake and they only bake so many an hour, they don’t always get orders for them all.

Yes, it’s your lucky day if they choose your table to bring one too. Easily shared between four people and redolent with cinnamon and apples, they are something one can easily dream about at night.

My recipe, a very old post that has yet to be updated with new photos, is of this type. I don’t have The Original Pancake House’s recipe but mine is pretty, pretty good and a luxurious way to start the day. I heartily recommend it. 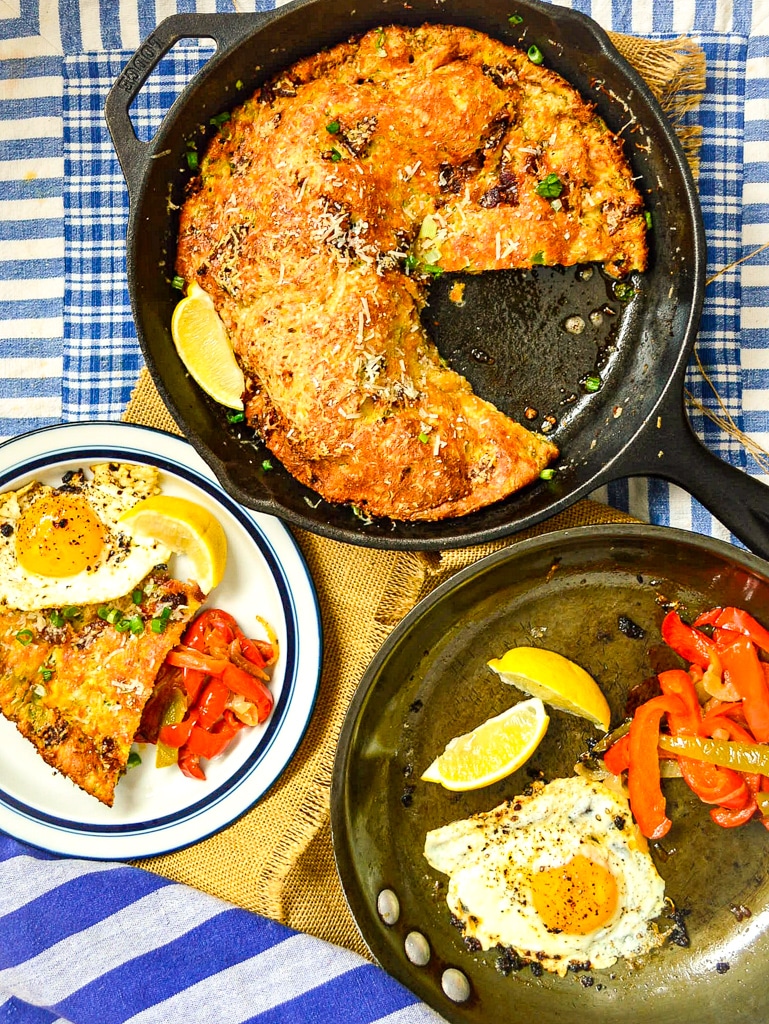 When having breakfast with my daughter awhile back, she glanced at the menu and pondered out loud whether she wanted a sweet breakfast or a savory breakfast. I’d never thought of breakfast that way before, but it stuck in my mind. After all breakfast does seem to be the meal of the day that  can go either way.

This German pancake, Dutch baby recipe does not remind me of a standard sweet Dutch baby. Yes, it gets beautifully puffy-a bit arrogant perhaps-but it reminds me more of a Yorkshire pudding in texture, than a sweet apple cinnamon Dutch baby.

I felt it needed some doctoring up so I added some bacon bits and hot sauce to the mix. Thinking it even needed more, I decided to gild the lily with a fried egg. Fried eggs always seem to make everything a bit more golden-at least according to Manservant.

And because I had some red and green peppers that needed a home, I sauteed those, too.

So today’s recipe is a savory version of a German pancake. One filled with crisp bacon and parmesan cheese. One flavored with herbs and topped with fried eggs. One that is so satisfying it might inspire you to start tackling those spring yard projects. 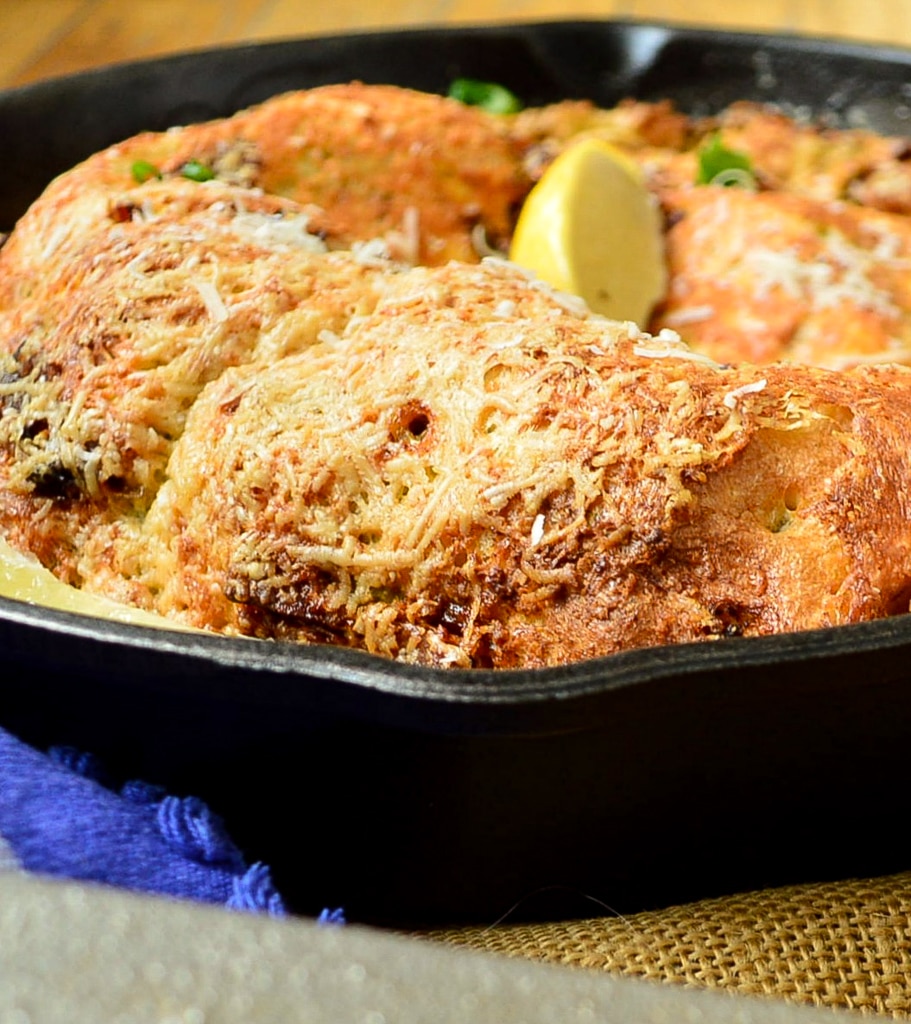 How do you make a German pancake?

Let me start by saying it’s a whole lot easier than flipping pancakes over the stove! This recipe begins with crisp bacon so make sure you have that. From there it’s a matter of taking an oven proof skillet (I use a cast iron) and melt some butter.

Of course there is no need for fried peppers and fried eggs. You could just eat this pancake plain with a drizzle of olive oil or a squeeze of lemon. The choice is yours. And that could also mean sweet or savory. Because a German pancake can go both ways. I promise that neither will disappoint. 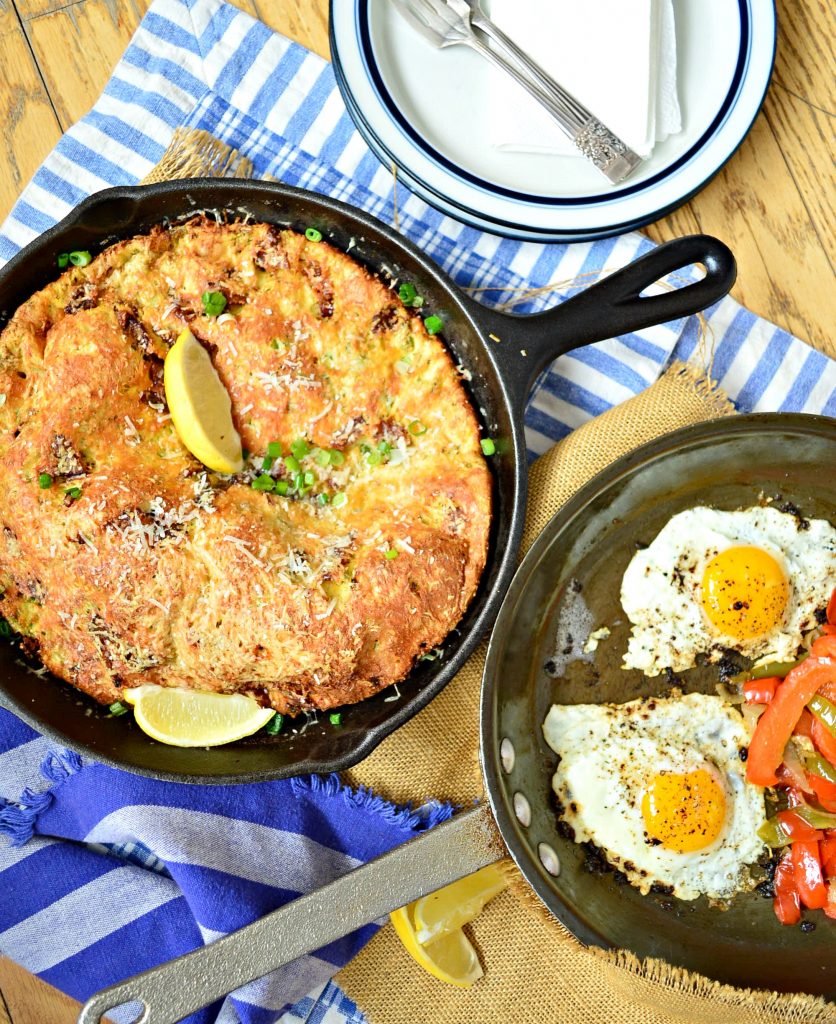 A few Sundays ago when Manservant left for Sweden, I managed to crank out a swanky breakfast. By all rights someone who is leaving me should not be subjected to something so good. But I am kindhearted, probably too kindhearted, because this was practically the last time I spoke with him for two weeks.

His not so kindhearted company works him to death and this wife who is quickly becoming not kindhearted about said company, who always returns her husband home sick and cranky, is becoming quite cranky herself. Not that she blames it all on said company, as we all know everyone should have thirty seconds in a day to call or text their loved ones.

This savory Dutch Baby with bacon and cheese is an awesome way to start the day. So easy to make and such a great change from a sweet Dutch baby…it’s time to give this bacon and cheese puffy pancake its due! 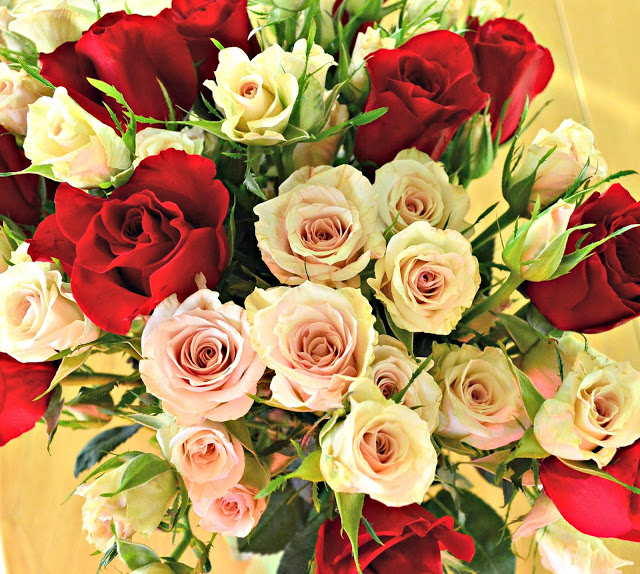 It appears I wasn’t totally forgotten by this manservant of mine; I just seemed to escape his memory for some time.

After all his excuses we ended up having Vietnamese for dinner, which is totally acceptable to me. It appears that Vietnamese families dine out en masse on Valentine’s Day, judging from the very large groups of families that were surrounding us, some even bringing red rose bouquets to the table.

We got our standard dishes of goi ga and shrimp in black pepper sauce, crystal rolls and egg rolls. And then we were full. We followed out the large groups of 12  carrying our doggie bags as we drove down Federal that was totally crammed with cars-and fire trucks and ambulances. I have no clue what was going on.

We arrived back home to two wagging tails and then it was off to bed for Manservant-where I have no doubt he was dreaming of that awesome, kindhearted wife that he married so long ago. I was left awake, after all, it was only 8:30, watching Larry David portray Bernie Sanders-which was quite a hoot, while thinking of pink roses and brown salt bowls and pondering life; which can be a little salty-a little sweet-but it all seems to work out in the end. 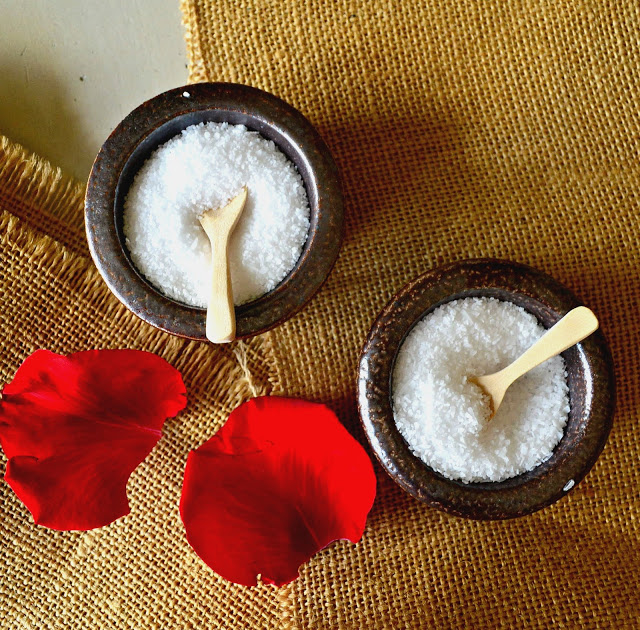 This savory Dutch Baby with bacon and cheese is an awesome way to start the day. So easy to make and such a great change from a sweet Dutch baby…it’s time to give this bacon and cheese puffy pancake its due! 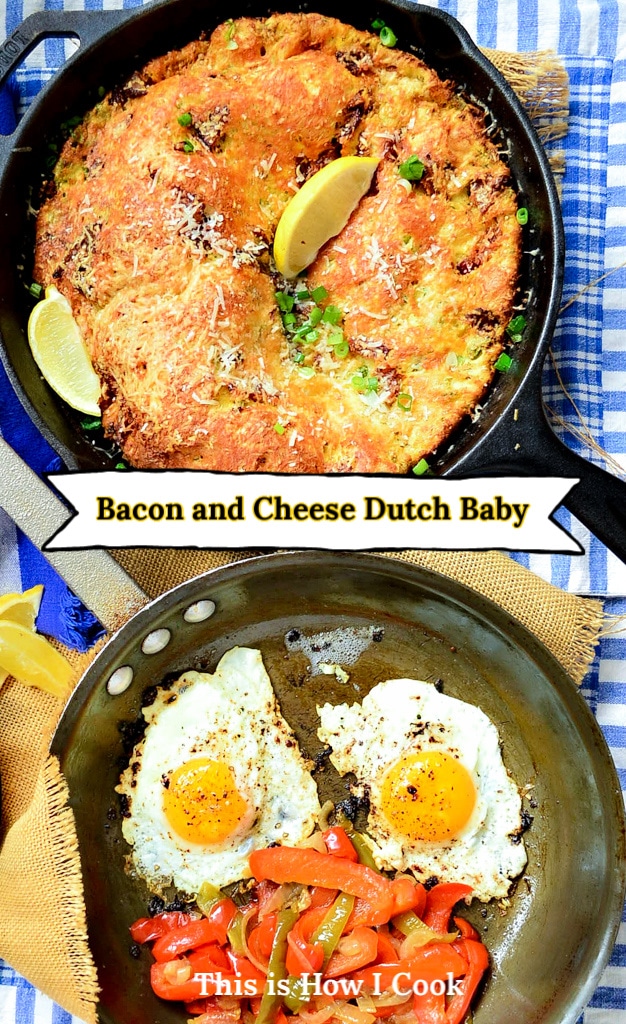 A few things I used when making this recipe:

This savory German Pancake is much better than flipping pancakes. After all, it has bacon!

Salt and Pepper to Taste

Cook bacon until crisp and then finely crumble. Set aside. Reserve the bacon fat.

Use 2 T of bacon fat and saute your peppers and onion in. Remove from pan and keep warm. In the same pan you can use the remaining bacon fat to fry your eggs soon before the pancake is ready.

Preheat oven to 425. Melt butter in a heavy 8″ skillet over medium high heat until it sputters, turns brown and smells great. Make sure the bottom of the skillet is coated with butter.

In a large bowl combine flour, salt and pepper.

In a measuring cup whisk together the eggs, milk and Tabasco. Combine with dry ingredients. Stir in cilantro, chives and crumbled bacon.

Pour batter into hot skillet and scatter cheese on top.

Bake at 425 for about 25 minutes or until your baby is puffed and golden. When the pancake is just about ready, start your eggs.

To assemble: Cut a wedge of pancake. Top with peppers. Top peppers with a fried egg. Serve lemon wedges to squeeze on top of or a drizzle of olive oil. 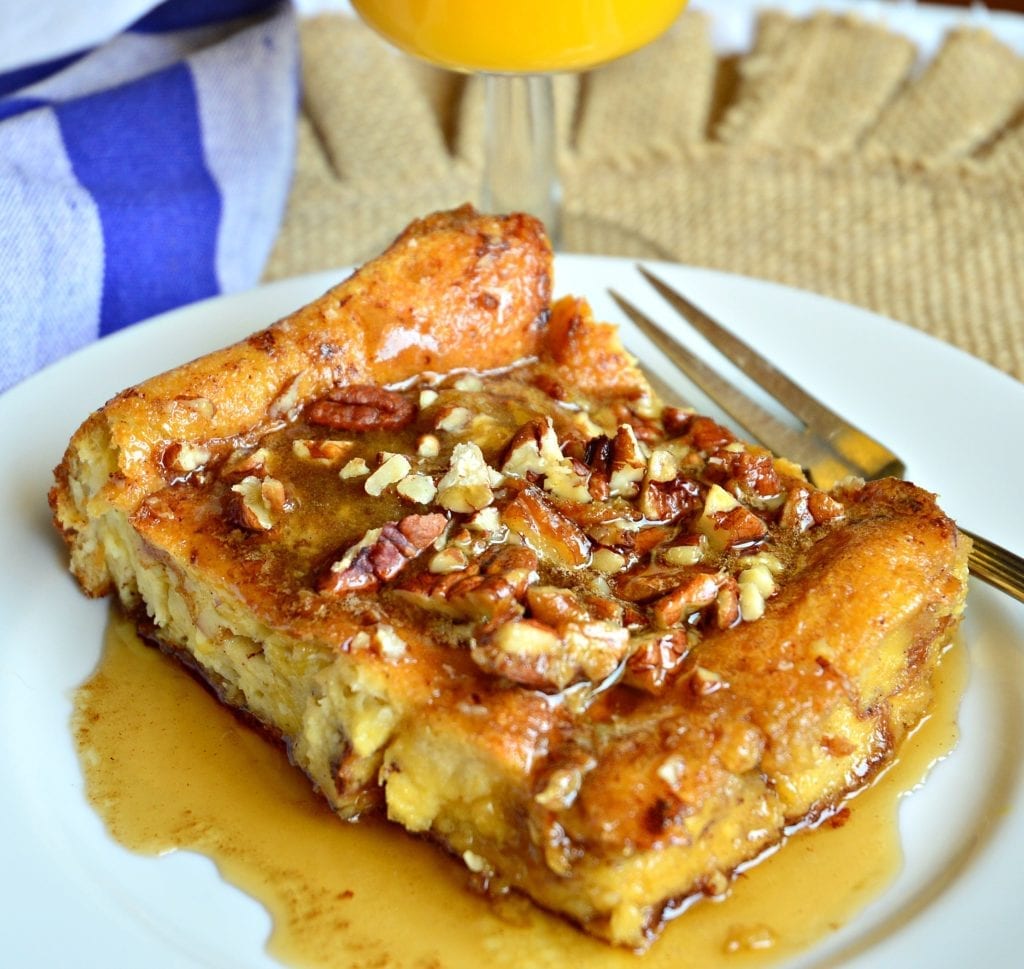 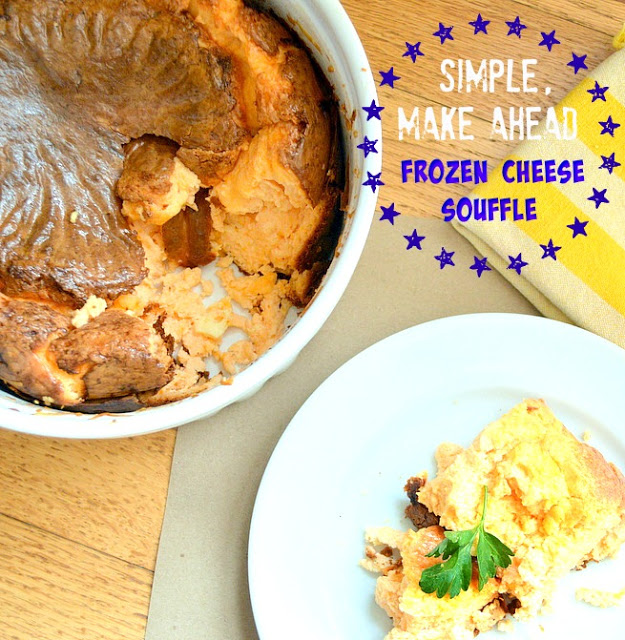 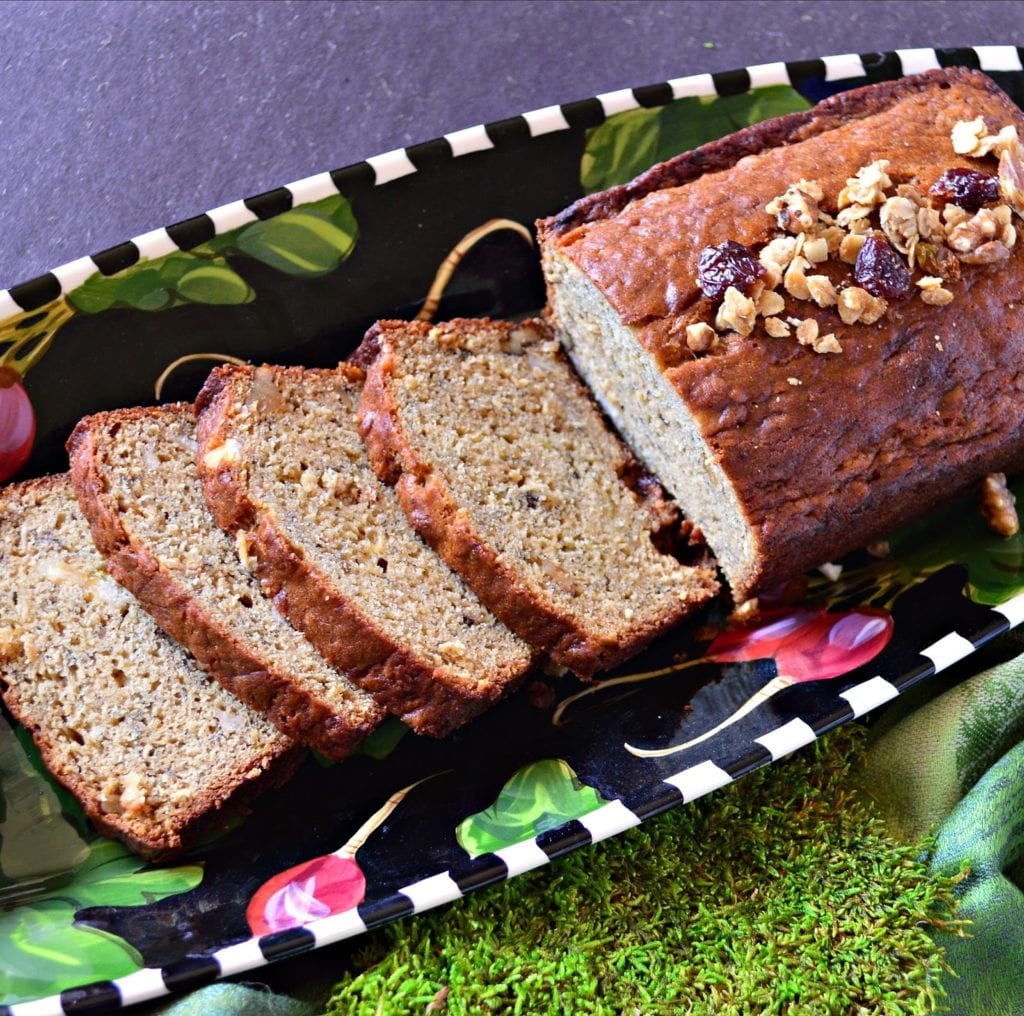 This looks amazing Abbe!! Hope you had a wonderful Passover!! Xo

You would love it! Have a happy Easter and thank you!

There needs to be a warning on your site! Don't come late at night when you are trying not to snack because you will leave hungry! I hope I can hold out until the morning to whip up this delicious dutch baby. Delicious!!!

This is brilliant! I’d much rather eat a savory Dutch baby than a sweet one. Love what you did here!

OHHH MY! THAT LOOKS and SOUNDS sooo frigggin' yumm!

You know it Gigi!

Well is can't be breakfast soon enough! Headed for bed shortly and I'll be dreaming about this tonight. YUM!