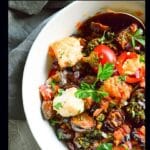 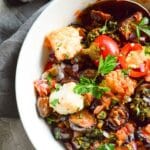 Fish stew with caramelized eggplant and tomatoes is a hearty and simple dinner. Loaded with flavor from capers and garlic makes this stew a winner! 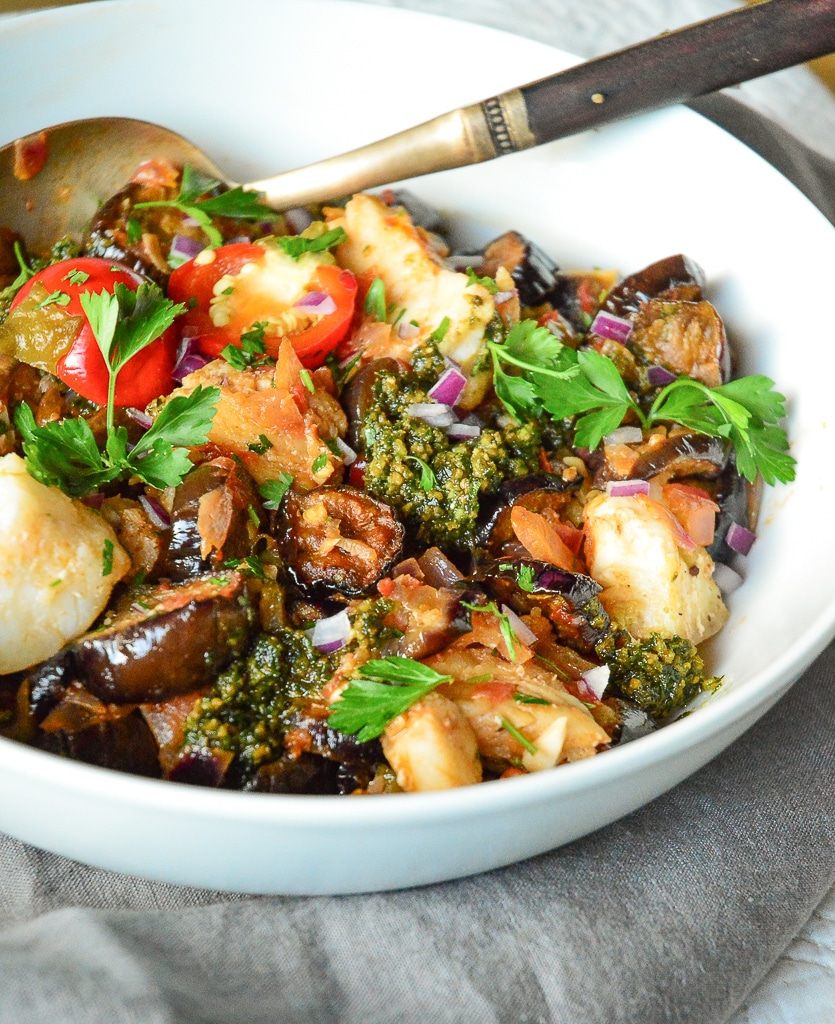 Fish stew recently became dinner in our house. The fridge has been full with the end of the garden’s Japanese eggplants and they needed a worthy home.

This simple supper became a satisfying and healthy meal that is perfect for eggplant lovers.

What makes this recipe so good is caramelizing the eggplant first. Preheat your broiler and then simply toss with some olive oil and season with salt. 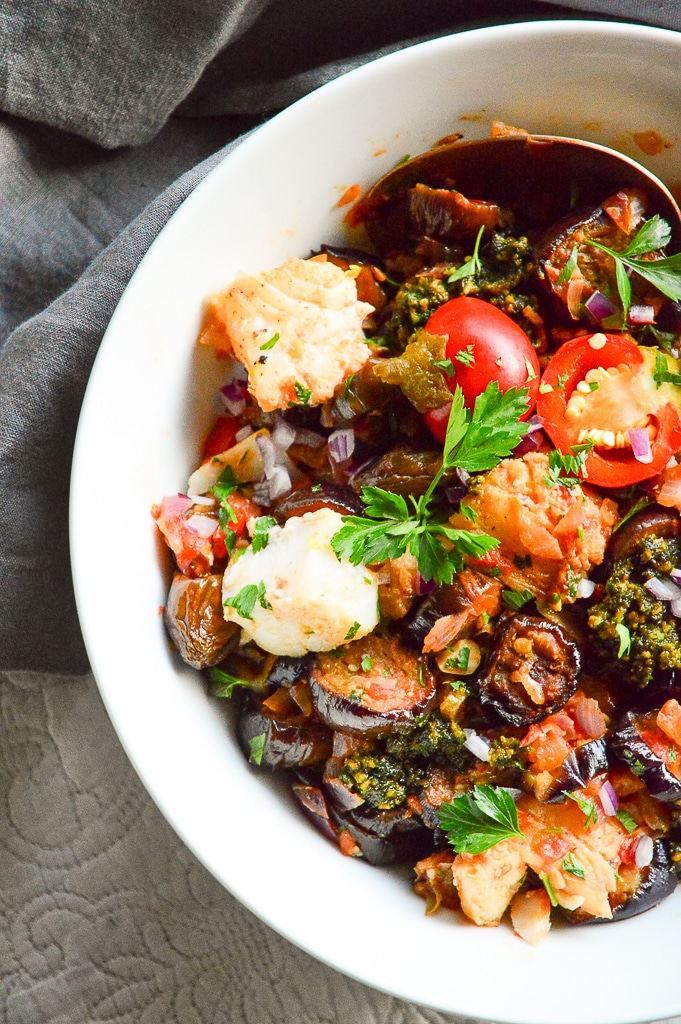 Whatever you do, don’t eat all the eggplant when they come out of the oven. I do love caramelized eggplant! Salty and soft with burnished edges…well, they are almost better than potato chips!

Cod was the fish of choice as it was hiding in the freezer, but swordfish or tuna or even chicken will work in this fish stew also. Just be sure to cut into 1 1/2″ chunks.

Full of Mediterranean flavors this hearty stew is still light and loaded with umami. 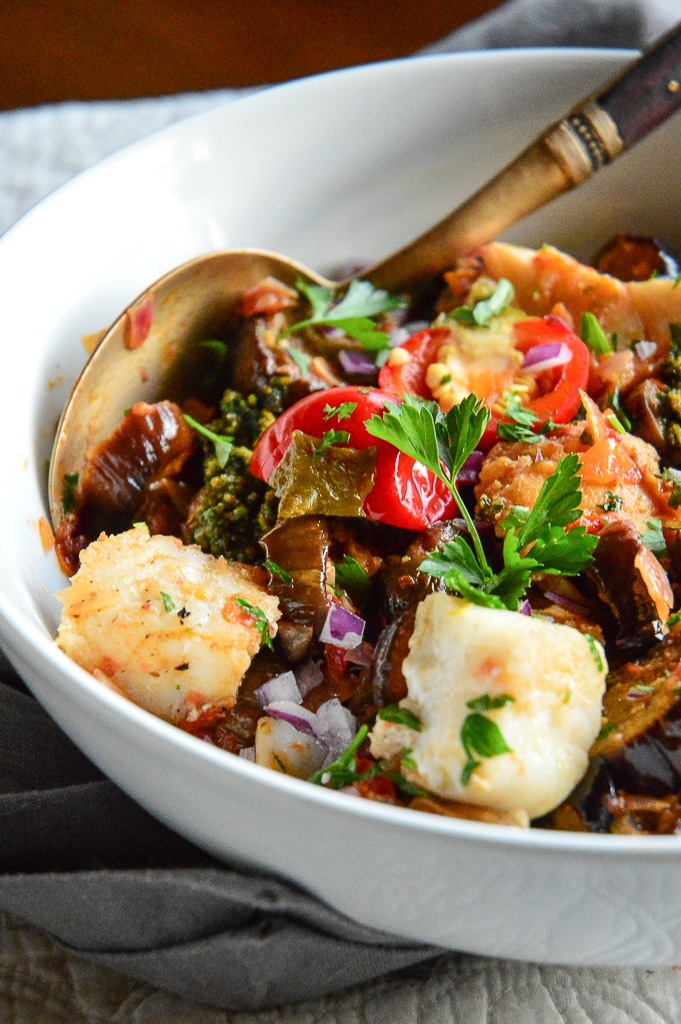 Garlic and capers and olives, or pepperoncini or cherry peppers, add tons of gusto which is great for such a easy meal.

Spaghetti or rice are a perfect base for this fish stew. We served ours on farro.

Want to make this super hearty? Mashed potatoes would send this into nirvana! However it might move this dish out of the healthy world!

I’ve been needing to cook some quick meals as we just started a basement project. Our basement hasn’t been touched since the kids were wee ones.

The carpet is … well, I don’t even have words for why something so ghastly is still in my home. 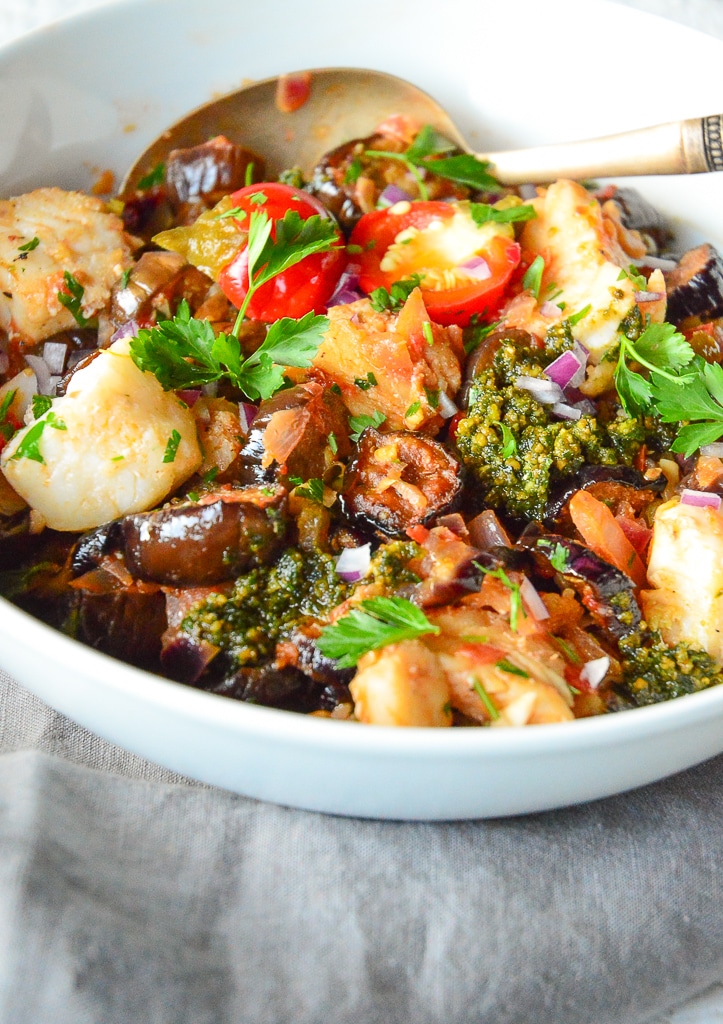 The walls, which I painted years ago, have stripes of navy and orange and hot pink and most of them are not straight! But it worked at the time.

Well, we are attempting to make this walk out space into something we’d actually like to work out in or perhaps even watch a movie! Can’t remember the last time either of those happened.

To do this we have to remove their special little play house from under the steps. Completely hand painted by me and tiled with Mexican tile, I will be sorry to see this space disappear. Many happy memories lived under those steps.

But I’m ready. I’m going to attempt to paper bag my floors and then everything will have to be repainted. Hopefully my knees will hold up! We’ve already cleaned out the crawl space where we discovered a leak from the upstairs shower.

Next up is demolition. 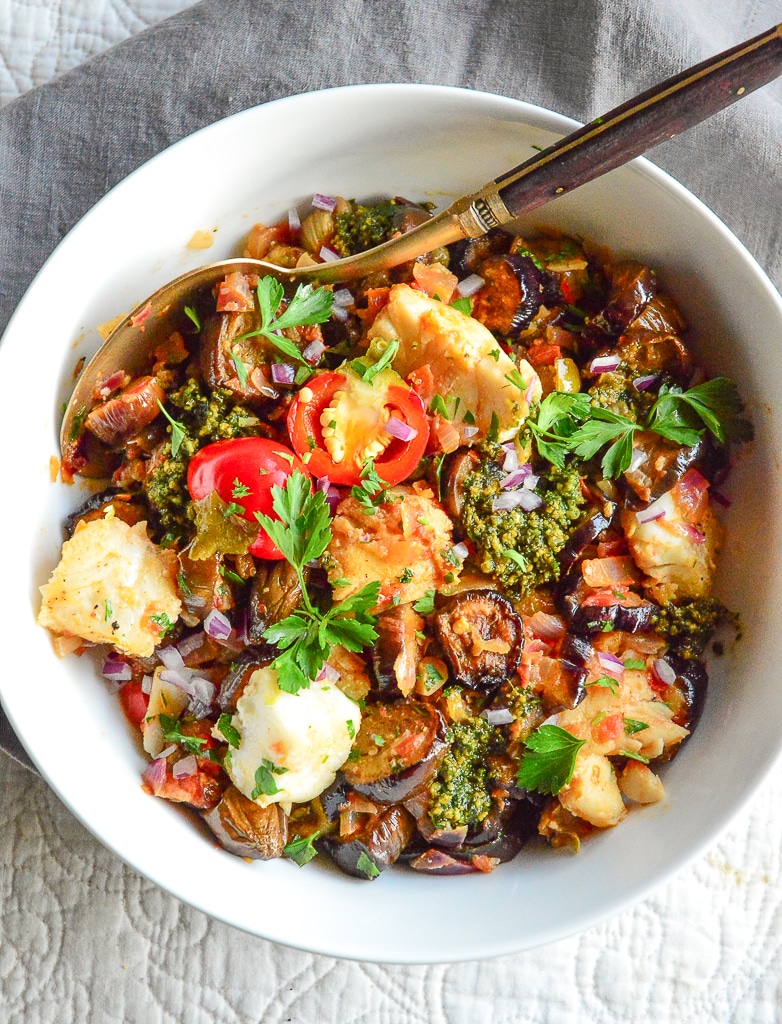 This coming weekend we’ll begin and I still have to choose a color!

Eventually we hope to add a kitchenette and make this space comfortable for visitors and perhaps even grandchildren. Hah! Not sure if that day will ever come!

The hard part about this remodel is getting everything done in 4 weeks because that’s when Zoe and Evan show up for Thanksgiving.  I have a lot to do!

So quick and simple meals ahead. And Thanksgiving will be my choice this year. Which means this kitchen is not taking requests. We are keeping it SIMPLE! 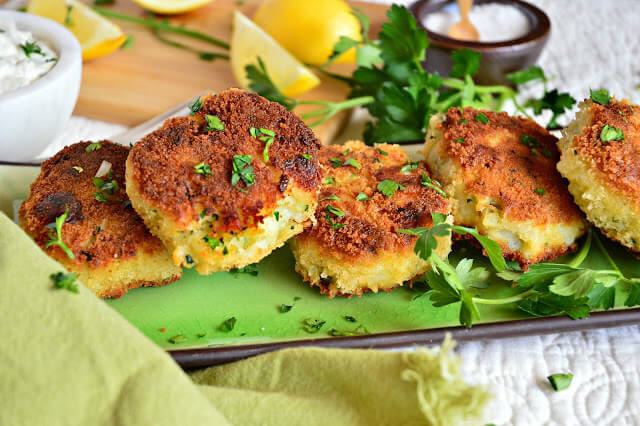 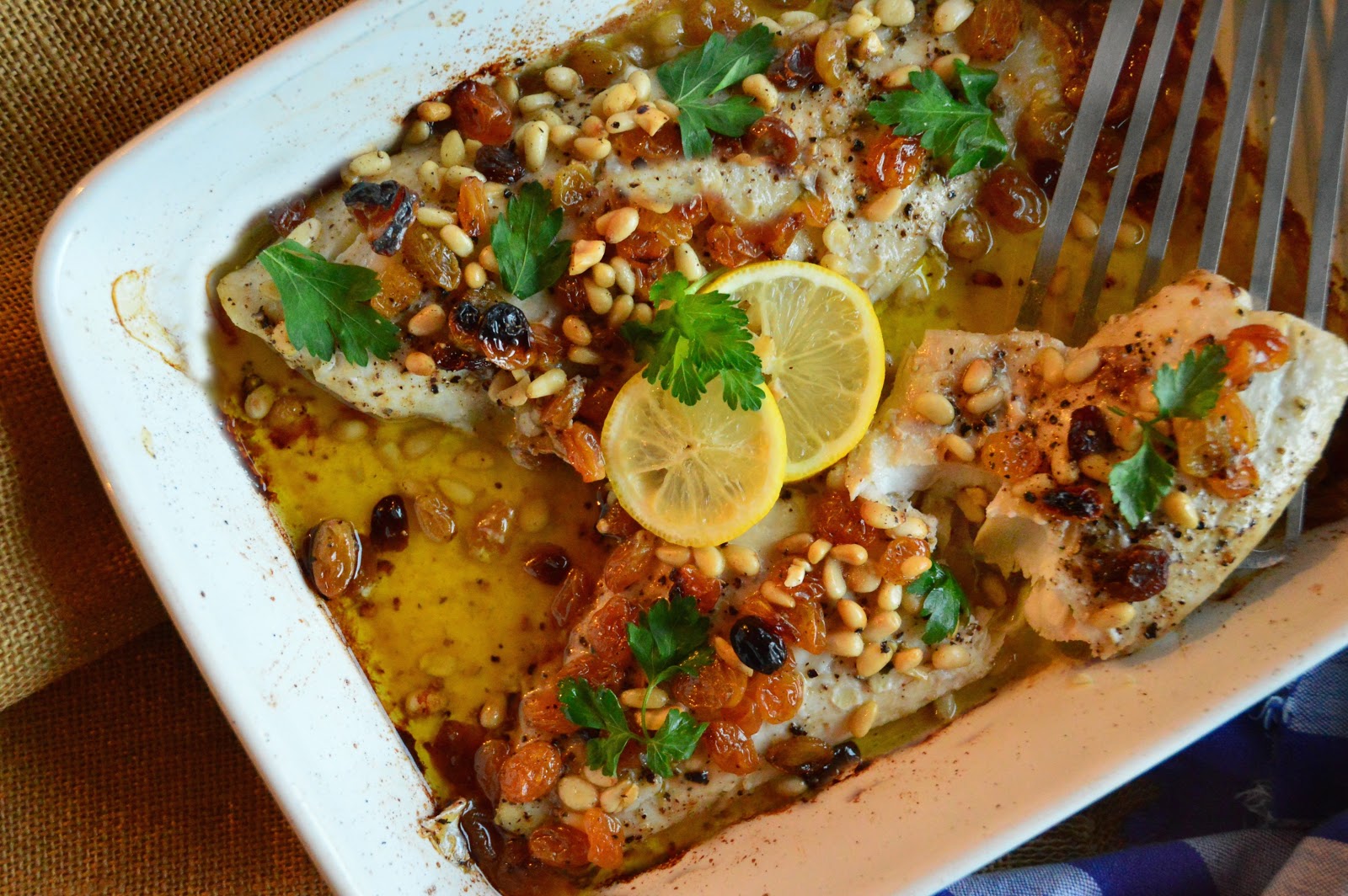 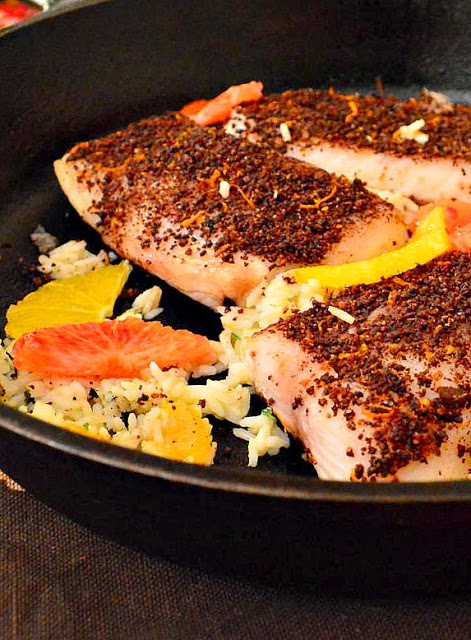 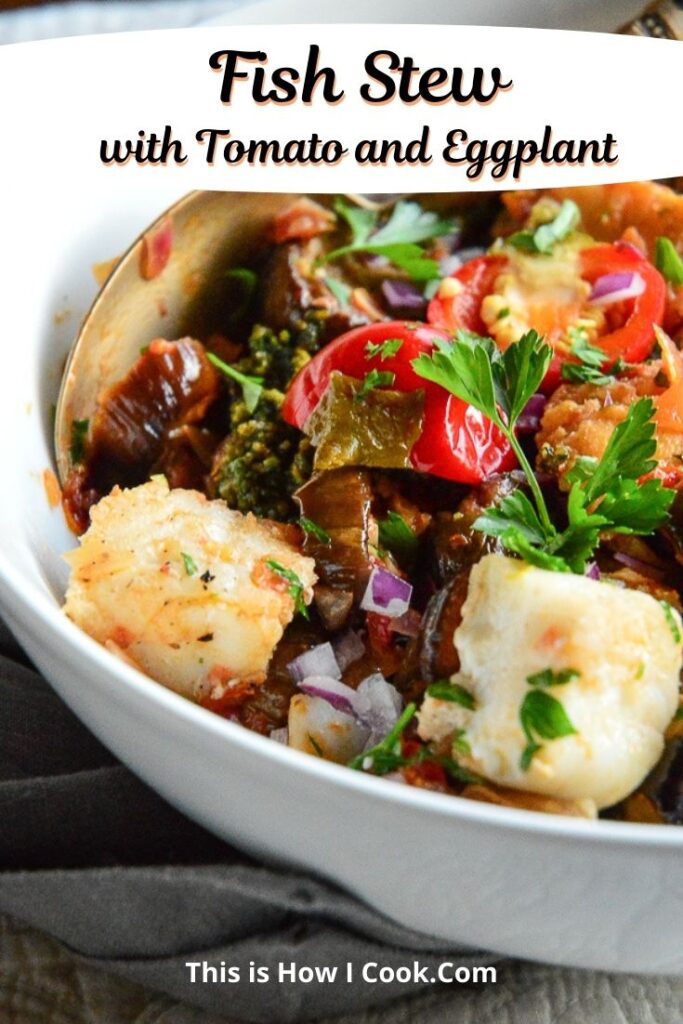 Fish stew with caramelized eggplant and tomatoes is a hearty and simple dinner. Loaded with flavor from capers and garlic makes this stew a winner!

Basil or basil pesto for garnish

Set a broiler rack 4″ from heat source and heat broiler.

In a large zip lock bag, toss eggplant with enough oil to coat and season with salt. Broil until golden and charred in spots, 2 -4 minutes per side. Remove and set aside.

While eggplant is broiling, heat a large skillet over medium high heat. Add 2 T oil and when it’s hot add onion and a pinch of salt. Saute until lightly browned and soft, about 5 – 7 minutes.

Add tomatoes and 1/4 c water and simmer until the tomato breaks down and turns saucy, about 5 minutes. Add a splash of water as necessary and feel free to smash the tomatoes.

Add cooked eggplant to the skillet along with a drizzle of oil and turn heat to medium low. Cook until the mixture is very tender, 10 to 15 minutes. Taste and season with more salt and add plenty of pepper. Using a slotted spoon, transfer eggplant mixture to a bowl and set aside. Raise heat to medium.

Without wiping pan, add butter and let it melt. Add garlic and saute until fragrant, about 1 minute. Add wine, olives or cherry peppers or pepperoncini, capers and a pinch of salt and bring to a simmer.

Add fish and cook gently, turning the pieces with a spoon so they don’t fall apart, until cooked though, 3 to 5 minutes.

Return eggplant mixture to pan and gently stir in parsley. Heat until the mixture bubbles, 1 – 2 minutes.

Garnish with basil leaves or pesto and a squeeze of lemon juice if you want. Serve immediately.

This delicious fish stew has everything going for it! the capers, the eggplant, the wine... yum. However, we are so not ready for a demolition and redecorate. Sending positive vibes and well wishes your way. We have done so much moving and so many renovations, I think I am completely burnt out from that. Next house... has got to be move in ready.

ooh yes this sounds good. not a tomato fan but i could always add capsicum instead i guess. love all the flavours here. caramelised eggplant is soooo delish!

What an amazing combo of flavours! I love fish, but can't remember when I last made it to a stew, let alone with eggplants. A really fun and delicious dish, Abbe.

Fish stews are good, aren't they? Particularly ones like this that look like they come from a southern France holiday. Eggplant are great at this time of the year -- this is a nice way to use the last good ones from the farmers market. Or the garden. :-) Really nice recipe -- thanks.