This rich Cincinnati chili is made with cloves and cayenne, allspice and cumin. Add in lots of chili powder and some dark chocolate and you have an amazing chili! 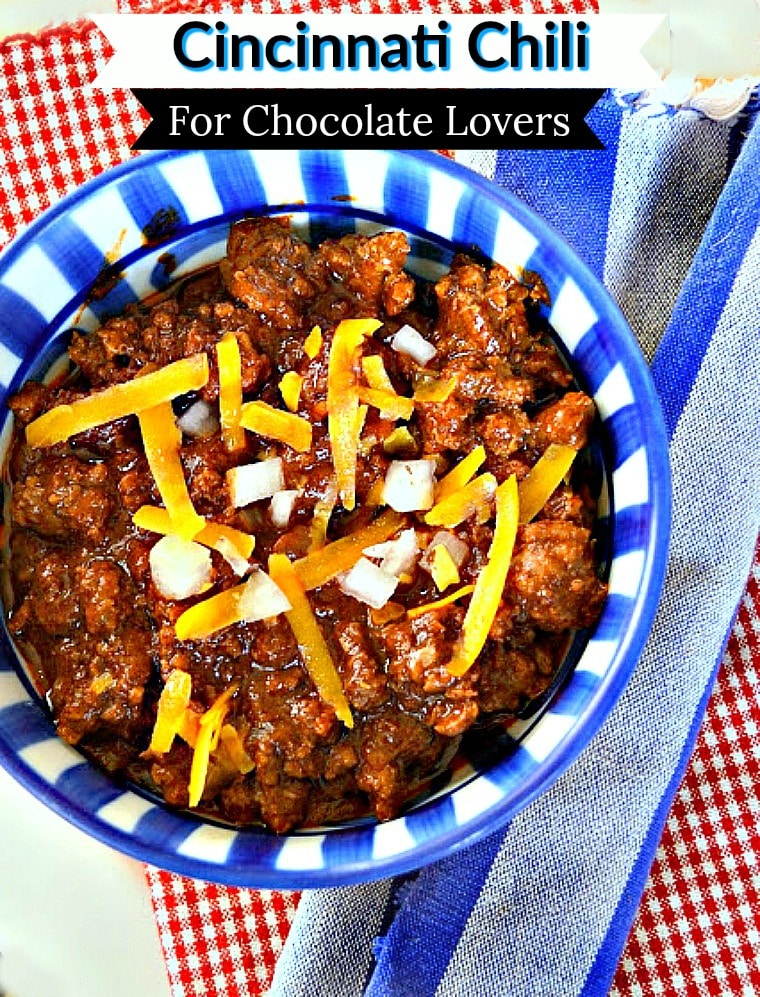 This post was originally published in 2014 and has been updated.

Shivering from the chill, she plunked down at the table and eyed the chili with a chilly look. “This sure looks like weird chili to me”, she thought. The deep brown Cincinnnati chili stared her down and dared her to chill out. “For real. Let’s do some chillin’, ” this chili muttered. (Well, that is, if chili could talk.) With air scented from the essence of cloves and cumin, allspice and cayenne, the aroma from the chili was enough to send her over the top.

That’s a lot of chills to come out of one bowl of chili. And Cincinnati chili, no less. Ever since I made my Chili Mac last year, I’ve become kind of obsessed. I never loved chili as a child. I remember it as a kidney bean thing and I am no lover of kidney beans. But having married a chili lover, I’ve since become one. Once I discovered the myriad of ways to make chili, I was quickly won over. Truth be told, I love Cincinnati chili. Manservant may love his Texas style chili, but Cincinnati chili is hands down, my favorite.

A few weeks ago I ran across the Mast Brothers Chocolate cookbook at the library. This is a great book, I’ve since bought. Filled with recipes like Orange Nib Crusted Salmon and Cocoa Butternut Squash Soup and even a Cocoa Balsamic Vinaigrette – well, this is not just a dessert cookbook. This is a chocolate lover’s cookbook and a cookbook lover’s cookbook, too. It is a great story about how the Mast Brothers came to be. Since chocolate or cocoa is a component of Cincinnati chili it’s only fitting that this chili should be in their book. 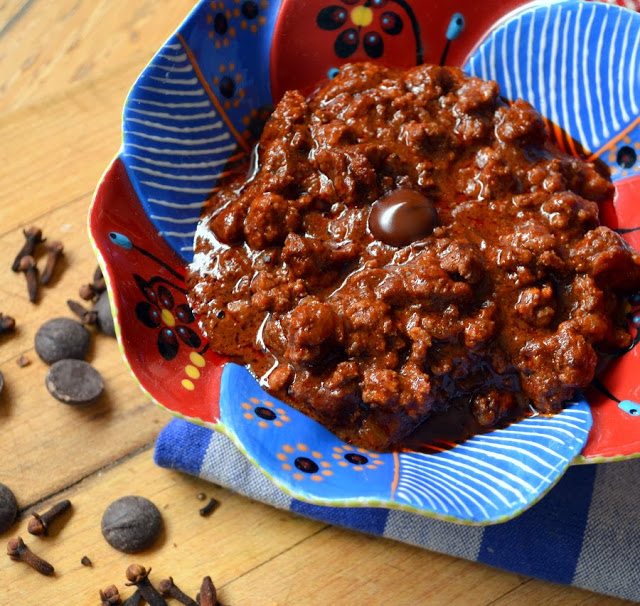 What is Cincinnati Chili?

Cincinnati chili origins began with Greek immigrants in 1920 in Cincinnati and became a meat sauce for spaghetti or hot dogs. With spices from Mediterranean regions such as allspice, cinnamon and cloves, this chili is not a standard chili. Think of this as a sauce that may have had its origins in moussaka or pastitsio and quickly adapted to its new American region. Cincinnati chili is served whatever way you like it and by that I mean one orders their chili over spaghetti with beans and onions or cheese. Two way chili is simply chili and spaghetti. Add in onions and cheese and one has four way chili.

Mast Bros chili recipe is kind of like an over the top gourmet restaurant’s chili. It is simple to make and fun to see how the flavors build on each other. When you start the tastin’, which I do along the way, it doesn’t seem to be getting there. But when you reach the conclusion, with the adding of the sherry vinegar and stirring in of the dark chocolate, well it’s kind of like an opus gone wild. It just reaches a crescendo and keeps ascending from there. This is not unsimilar to when I make mole, only making Cincinnati chili is a  whole lot simpler. 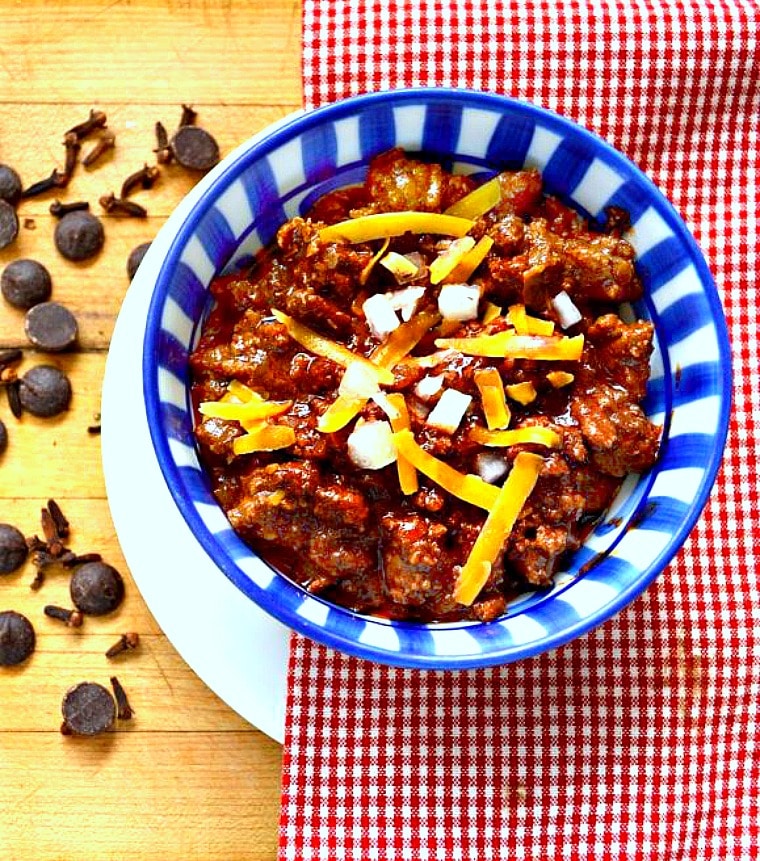 Now I love my other chili mac recipe but that chili might be more of what you find in a diner. I also serve it Cincinnati style 3 ways and I love it and though similar, this Cincinnati chili is much richer. This chili is one to savor and eat slow. Well, I say that, but I’m not sure. You might want to ladle it directly into your mouth. It would be fun to compare both side to side.

I made the Mast Brothers Cincinnati chili with Ghirardelli chocolate. Such travesty, I know. I now can find Mast Brothers chocolate  at Whole Foods. Would it make this chili taste even better? I really don’t know. But it is damn good even with my friend Ghirardelli. 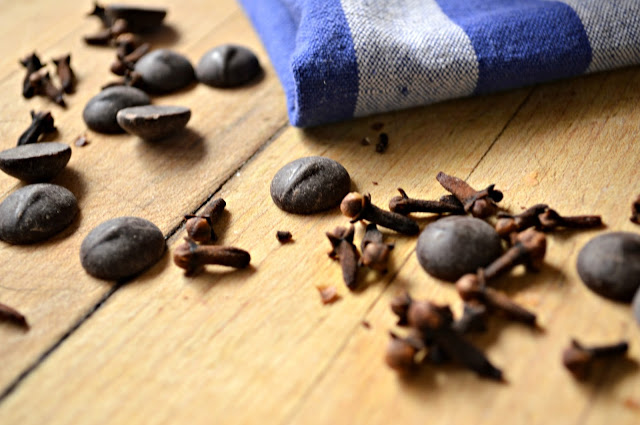 And while I was making this chili: Alex showed up. Alex, who in the span of less than 48 hours had his car fixed with carpooling from Mom, built a bed frame with help from Dad and stained it with help from Mom, and ransacked our home for art work and miscellaneous pots and pans. That Alex, who is now living in Vail, on Gore Creek, working at Matsuhisa, kept me from finishing this post. I should mention that if ransacking, fixing a car, and building a bed aren’t enough, he also bottled beer (Tricerahops) with his Dad until 12:30 AM Saturday morning in between running over to a shady part of town to buy an Iphone off of Craig’s List.

Luckily the Iphone the guy never showed, which was probably a good thing, since it was probably a too good to be true price. That Alex who also went to Costco to buy a microwave to take back to Vail, in between buying bottles to put the beer in and finishing the bed, thought he would be finished in 24 hours so he could ski with his buds on Saturday. Well, he didn’t leave until Saturday at 12:30 pm because he was too busy and so were we, which is why I didn’t send this post to you sooner.

Not that I minded. Alex has a way of making us both feel quite alive and the music is always going when he’s around, which is a good thing.  Though it did feel AND look like a tornado had hit once he left, yes, that Alex Odie, kept me from finishing this post.  And well, in the interim this Cincinnati chili just happened to show up today at Leite’s Culinaria, which just tells me that great minds think alike. Right?

And here’s one to pin for future chili days: 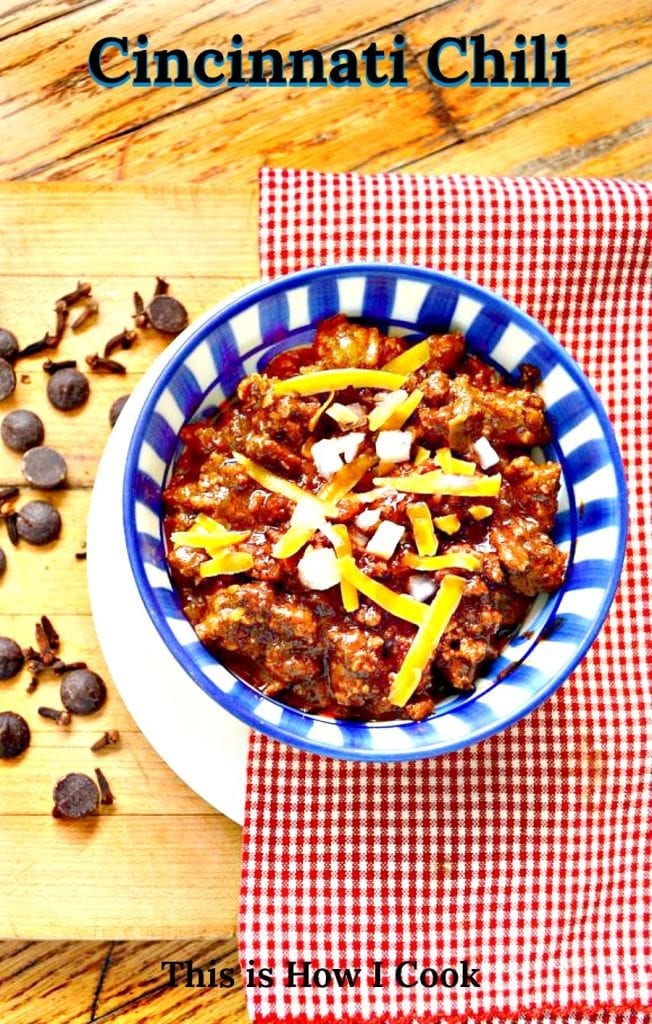 I’m partnering with Amazon to help keep this site afloat.

I may earn a small commission at no cost to you, which I use to help pay for costs of keeping this blog going.

I love to make chili in a Dutch oven. Though it is expensive, my very favorite pot is my Dutch oven from Le Creuset. Look for it on sale and think of it as an investment. I was lucky. My mother gave me one once as a gift and I think it’s the best gift she ever gave me!

This rich Cincinnati chili is made with cloves and cayenne and allspice and cumin. Add in lots of chili powder and some dark chocolate and you have an amazing chili!

In a large pot, heat oil and saute onion over medium heat until translucent.

Add chocolate and vinegar. Stir until chocolate has melted in. Remove bay leaves and season with salt and pepper.

If you choose to serve this Cincinnati style you need to boil some spaghetti, chop some onion, grate some cheese. Beans if you want them. I serve it by putting a serving of spaghetti on a plate. I top that with a bit of grated cheddar. Then I add some chili. Then some beans. Then more cheddar. Then onions. Garnish with crackers. Or those little bitty oyster crackers. Stir it up. Eat it. And if you are lucky you might have a Tricerahops ready to go!

I grew up on Cincinnati Chili since I grew up north of Cincy and later lived south of Cincy. I love the chili but always added a teaspoon of cinnamon to it, it makes a difference. And always over spaghetti. A good old chili for sure, Abbe! Cincy was always called Little Italy, a lot of hills, the 7 hills, and great restaurants too!

Oh Abbe, I love a good 3 way Cincinnati Chili! I haven't seen one as amazing as this though! Love the chocolate and seasonings in it. Also cool to read about it's origins.

You are so funny! We have so many places in Wisconsin that people can't pronounce or spell! This chili looks like a winner, Abbe! I still make the chili the way my mother made it and I need to expand my repertoire. There's another tough one - LOL.

I can't tell you how many times I had to redo the photos with the title because I got the spelling wrong!

I just did a lot of LOLing reading your post. You are SO very witty! I encountered this type of chili in the late 60s while living for 2 years in Oklahoma City - my neighbor called it Chili Spaghetti - and it held a regular rotational place in my kitchen for decades. I'll be trying your version next time it gets cool enough here in SoCal for eating chili. I also got a big chuckle over the beer name. I'm not a beer drinker, but loved the creative branding, TriceraHOPS. Clever.

Thanks Carolyn for reading. Chili spaghetti is great and this version is so good, but check out my chili mac, too!

Yeah, this is fabulous. I love all of the ingredients. Aren't there also noodles in C. chili? I can't spell it either. That, and Mediterranean.

There are Mimi. Chili 3 ways is spaghetti, chili and cheese. 4 ways adds onions and 5 ways adds beans! Take your pick.