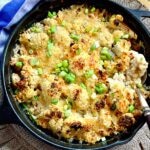 This Cauliflower Gratin Casserole has the right stuff. Made to be rich; this dish is filled with cheese and cream. Some might think of it as mac and cheese, except cauliflower replaces the mac. Reminds me of a steakhouse side dish-where often times you want the side dish more than the steak! 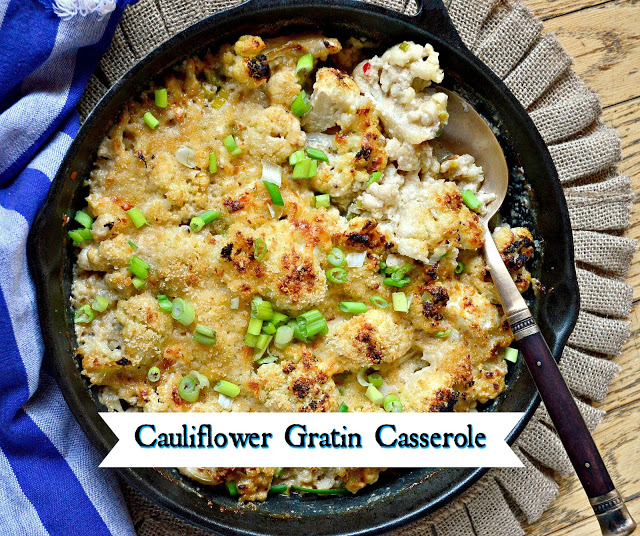 With Passover and Easter behind us, it is always fun to reminisce. I loved having my folks here even though they almost froze to death in our 70 degree house. Zoe always brightens my day and I still wish she lived near by. Perhaps Alex could heed that message, too?  Passover found me cooking a few new dishes, such as a boneless leg of lamb that everyone tells me now beats out my brisket. I am not a meat eater, but it seems I still have the knack. The lamb was a great, very simple, dish topped with my famous chimichurri, (perfect for Spring), and lamb is less expensive than brisket. The mandoline sliced potatoes that the lamb dripped on, were also blue ribbon winners and even I had a taste of those. You know I love potatoes and these were outstanding, laden with onions and garlic and wine; we didn’t have but a bite of leftovers. Isn’t it awful to tell you about such good food and not supply the recipes? If you must have them, let me know, and I will get them to you!

Passover also found us in the plumbing department again, when my helper who was way better than last year’s-remember the guy who didn’t know how to wash a dish and told me he wasn’t feeling well because he had gas? Well, thanks to Jeff  at Bartenders and More, we had a great clean up. I was a bit agitated when he told me we had a slight problem in the dirty dish filled kitchen. Well, slight was a bit of an understatement – but Manservant quickly came to the rescue when the hose on the sink broke, sending water over the counters, instead of on the dishes. Luckily it was a quick slicing off of the hose nozzle, and a bit of gorilla tape, that allowed Jeff to keep washing. I did end up with a clean kitchen and Manservant ended up with having to buy and install a new faucet the next day. 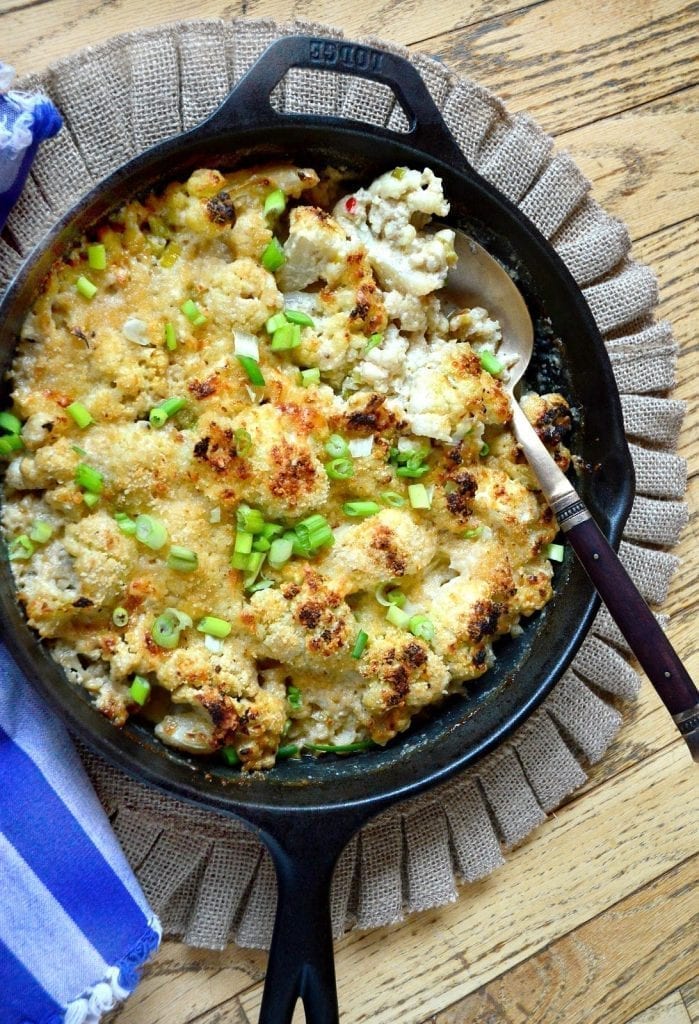 And then it was just this past Monday-thank goodness after everyone had departed-my folks to Phoenix, and Zoe for Hong Kong, where she will work for the next three months, when Manservant woke up and there was no hot water in the house. Yes, we knew our water heater had outlived its life-over 30 years old, this AO Smith heater had finally decided to conk. Ah well, she was good to us. So yes, this meant scrambling to figure out heaters and how to pay for one. I learned more than I wanted about water heaters and plumbers, since I really didn’t want Manservant to attempt this- BUT- he would have. And yes, as of this moment, I do have hot water and a shower sounds pretty good, because ice cold towel baths are not so fun in the spring. By my reckoning, for those who think things happen in threes, this is three if I include the shower grouting, right?

But enough about my plumbing and back to food. Zoe requested a big steak dinner before leaving but my folks wanted Chinese, which she nixed – because after all she will be eating Chinese food for three months;  though she could afford steak every night in HK with the budget they gave her, I know my girl and that won’t be the case. We did try, Yardbird, a new restaurant on Pearl Street, no not Chinese but good comfort food, where actually this cauliflower gratin would feel quite at home.. Still thinking of Chinese, Sunday night found Manservant and friends at Little Chengdu, which like totally speaks Chinese. Can’t wait to go back; it reminded me of China so much, but there were napkins on the table and no trash cans next to it!! Be different and ask for the Chinese menu and don’t expect anyone to understand you. We didn’t try the hot pots, but did get the Sichuan dumplings with chili sauce and the chili shredded potatoes-oh my-can’t wait to get back. Damn, the eggplant was outstanding too! THANKS, @Laura Shunk!

But back to steak dinners. I don’t eat steak but I am always happy to make those around me smile. I made the requisite sauteed mushrooms and did a great Caesar wedge salad. I even made crab cakes with my favorite remoulade sauce, so I would have something to eat, and Manservant could say he had surf and turf. Thinking of the steak houses with massive side dishes, that I prefer over THE steak, had me coming up with this cauliflower gratin. It seemed we had had enough of potatoes and though Zoe requested pasta-fettucine Alfredo, to be exact, I nixed that and went with cauliflower. I’m so glad I did. I’ve been munching it all week and was so happy with this veggie dish. Thinking also that Easter is commonly a meal where ham is served, I do believe those leftovers would work perfectly in this dish-just sayin’! Chop some up and throw it in, if you are so inclined. For that matter bits of crumbled, crisp bacon would work great, too, but I was happy with simple delish!

However you want it, this dish is a keeper-steak dinner or not. And now I’m off to the shower! 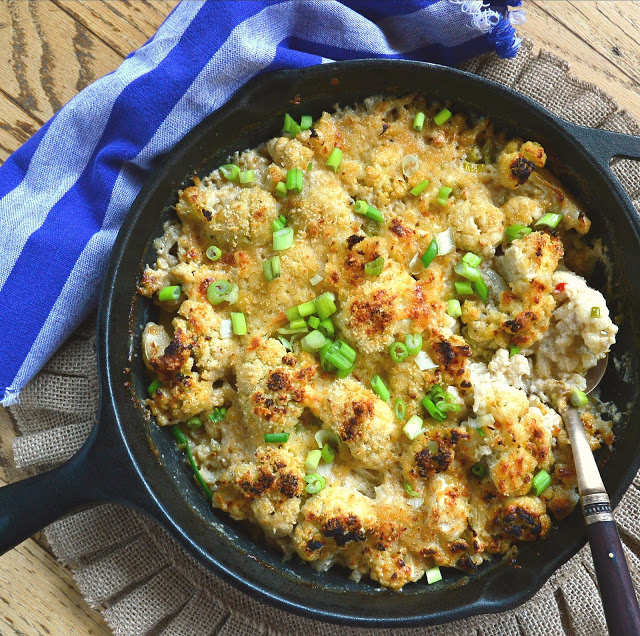 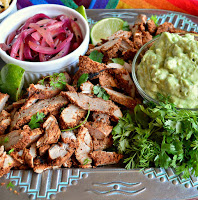 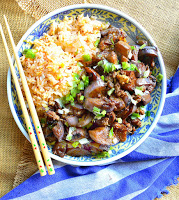 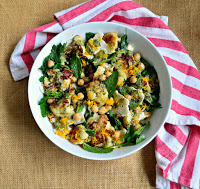 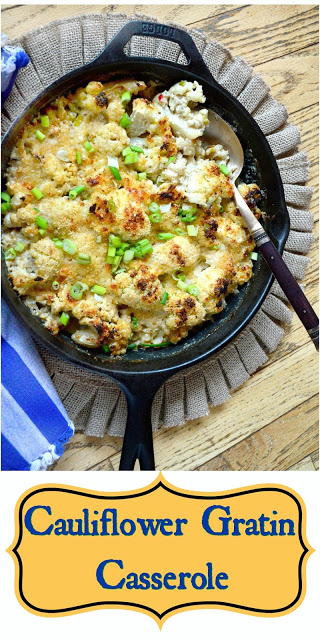 This Cauliflower Gratin Casserole has the right stuff. Made to be rich; this dish is filled with cheese and cream. Some might think of it as mac and cheese, except cauliflower replaces the macaroni. Reminds me of a steakhouse side dish-where often times you want the side dish more than the steak!

In a large bowl combine all the ingredients, except the cauliflower. When everything is well mixed, stir in the lightly cooked cauliflower. Spoon into the baking dish and sprinkle well with Panko bread crumbs.

Bake until casserole is bubbly and the bread crumbs are golden. You may have to run it under the broiler to brown it. Bake for 45-60 minutes. Let sit for 15 minutes before serving, lightly tented with foil.

If made in a freezer proof dish, this may be frozen for about 3 months. Thaw overnight in the fridge and then bake according to above instructions.

I think memories were made! GREG

This looks great, I love the idea of it being a casserole and a gratin!

I am a fan of gratins. They are easy to put together and always turns into a delicious meal. I gotta try yours with cauliflower.

Mercy, that was quite an adventurous time for you and yours! Our 30+ years water heater just died too, they sure are costly now compared to back then! :) Anyway, your Passover food sounds great and I love this cauliflower. Good luck with your household, Abbe! Take care

Wow, you have had your share of misadventure, Abbe! Hope all goes smoothly for the rest of the year ;) I love cauliflower and all cruciferous veggies and will pin this for an upcoming family dinner!