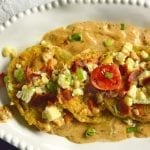 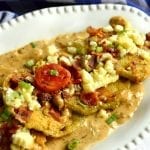 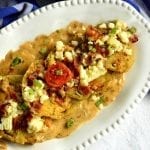 Fried green tomatoes, fried in bacon grease, are a once a summer treat. What are you waiting for? 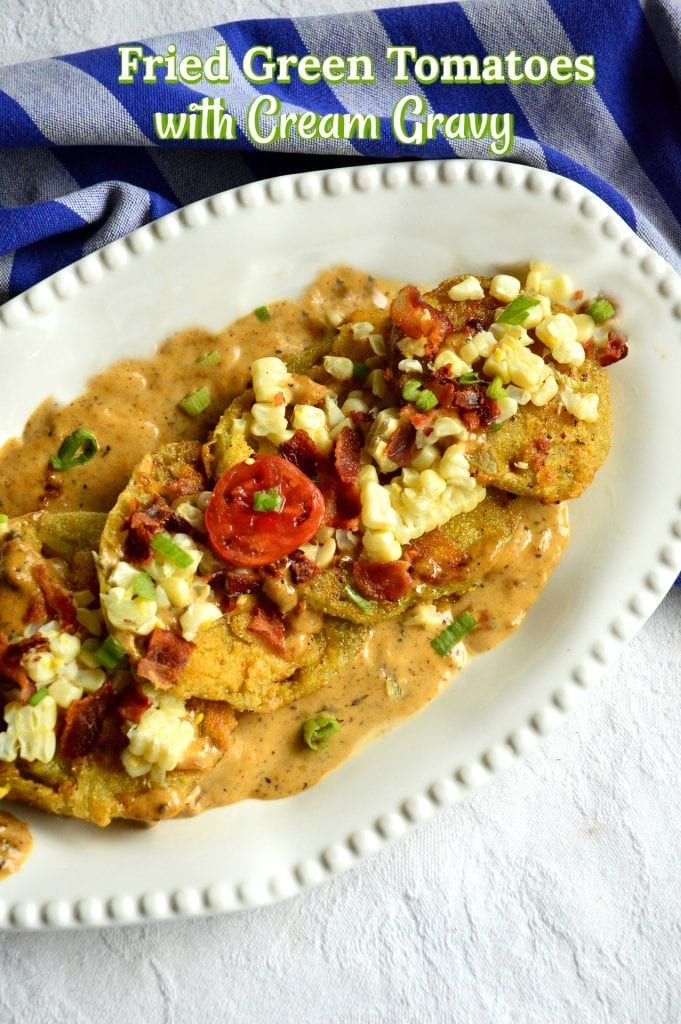 Need a fried green tomatoes recipe? There are many out there, but of course, mine is the best! Actually any fried green tomato one can get their hands on is probably the best, but I promise you, you can’t go wrong with this one! I didn’t have much time to celebrate the glories of summer this year, so I was pleasantly surprised to find that somehow my tomato plants did supply me with a few upon my return. I grew some green zebras this year and what a great fried green tomato they made! With Manservant out of town I decided to splurge and make myself this tasty dish topped with bacon and corn. Honestly, how can one go wrong with bacon and corn?

Fried green tomatoes were something I never ate as a child. In fact, I never ate tomatoes as a child. I detested them! My mother always grew a few for herself, I believe those BIG beefsteak tomatoes, and I remember her (apparently at the end of tomato season) frying up tomatoes for herself. She never offered us any, probably because we would have turned up our noses. Well, they say hindsight is 20/20 and now I know what I was missing all those years. After all, who wouldn’t want anything fried in a hot skillet?

Since I did manage to marry someone else who never liked tomatoes as a child, and still doesn’t like them now, I decided this dish was best made while he was out of town. In hindsight he probably would have loved them, given that bacon grease played a part in this recipe. And heavy cream. And corn. Well, you get the picture. These are deluxe fried green tomatoes! If perhaps you choose not to go ALL THE WAY, just bread your tomatoes and fry them in a bit of oil. They will still be delicious! Of course using heavy cream to create a luscious and simple gravy does make these a bit out of the ordinary, but the gravy is also a classic Southern twist.

Fried green tomatoes should be crispy on the outside and soft and tender on the inside. They should taste like one bite is not enough! They should have hints of salt and pepper and in this case, bacon. They should taste like you never want this meal to end! Most fried green tomato recipes are similar but like I said, mine is the best! Perhaps it’s the brown sugar that caramelizes and gives a hint of sweetness to the tomatoes which should also have a peppery taste. You tell me!

What goes with fried green tomatoes?

Truthfully, this fried green tomato recipe with or without the gravy, would make a great side dish to almost any main course. OK. I wouldn’t serve it with lasagna! But as a side for chicken or steak, you betcha! The choice of gravy is up to you. If you want something filling and rich, this certainly works as its own main course. In fact, these fried green tomatoes with a bacon and corn garnish are perfect with just a salad. 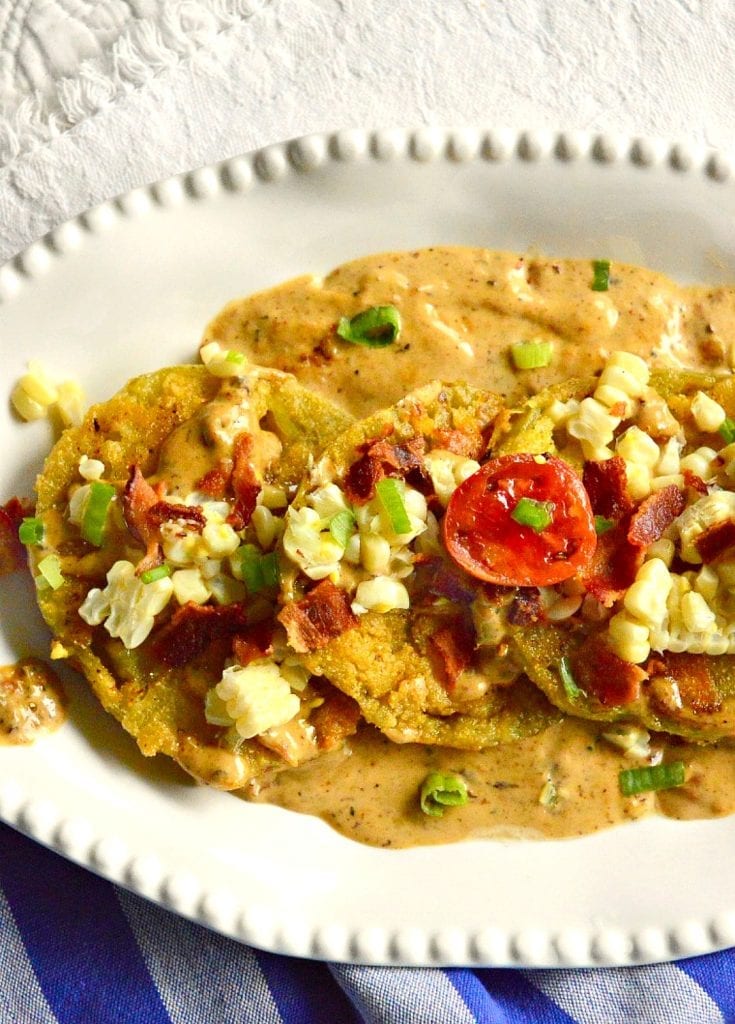 How do I ripen green tomatoes?

I’m guessing that some of you may have some green tomatoes and may not want to always be frying! If so, tomatoes can be placed in a newspaper lined box, with a little space in between each one, and covered up. It may take a few weeks to work and it helps if the tomatoes have a tinge of red or yellow, but they should ripen. If you want them to ripen faster, put a banana in with them, but with extra moisture be sure to check for mold every few days. 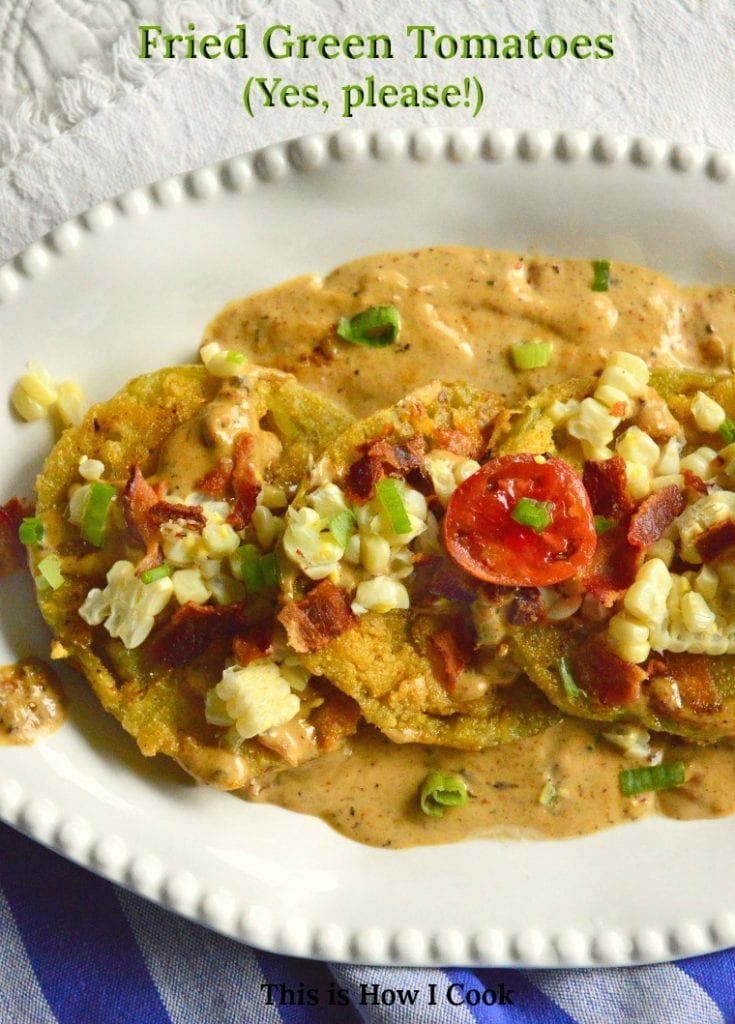 Fried green tomatoes, fried in bacon grease, are a once a summer treat. What are you waiting for?

1 ear of corn cooked and sliced off of ear, for garnish

Combine flour and cornmeal with salt and pepper.

Now dredge the tomatoes lightly in flour mixture and then into buttermilk and back again into four mixture. Set on rack while preparing your tomatoes.

Heat the bacon grease if it has cooled off. Fry the tomatoes a few minutes until they are crusty and golden on the bottom side. Turn the slices and sprinkle very lightly with brown sugar. (Be careful because you do not want to make them sweet.) Fry until the bottom side is golden. Place tomatoes on a paper towel to blot up grease and then place on a platter.

If you need more bacon grease and don’t have it, feel free to add some butter or oil to your skillet. The pan should be almost dry by the time your tomatoes are fried.  Now pour the cream into the skillet and scrape up all the bits from the bottom of the pan with a wooden spoon. Season with salt and pepper and even a little fresh thyme if you’d like. The cream will quickly thicken. Pour over or around the fried green tomatoes.

I seems my first comment didn't go through, just wanted to let you know I love this idea...deluxe fried green tomatoes for sure!

Thanks Karen! Deluxe would be the right word!

Abbe, you are not going to believe, but I have never had fried green tomatoes...I have heard of it, but never tried...sounds amazing especially with the sauce on it...thanks for sharing the recipe. Have a wonderful week!

It's been a long time since I've had fried green tomatoes but when I pulled out my tomato plants this year I was left with an abundance of green tomatoes. Looks like a win for me! They look delicious, Abbe!

I need to go check out my tomato plants. Most likely, I have just green tomatoes so your timing is perfect!

I’m usually not a traditional gravy person (like biscuits and gravy) but this sounds outstanding. I’ve never looked into making fried green tomatoes. There’s one salad I consistently get at a restaurant where my kids live (my married kid and family) and it’s topped with a fried green tomato and it’s outstanding! So now I know how to make them myself!