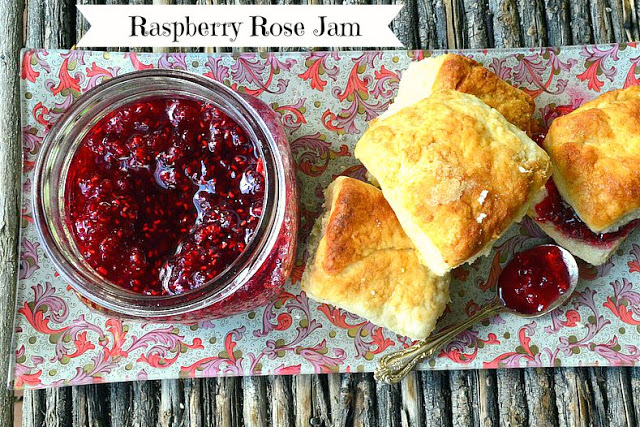 And so it is that sometimes I surprise myself. I’m not talking about something awe inspiring like climbing Mt. Everest. Or even Long’s Peak. No, I’m talking about something as simple as making jam. In particular this raspberry rose jam. I’ve tried and tried and other than my strawberry balsamic black pepper jam, I’ve never had great success; with jam making that is. We have had plum trees and a peach tree and even a cherry tree, that died of old age, and never was I able to take the fruits of their labors and do them justice.  It makes me feel so incapable. I think I’m a pretty accomplished cook, but certain things just stymie me.

So it was with great trepidation that I approached this jam recipe. I made sure it didn’t require any scary elements, like a thermometer. Or sterilizing jars. Or a water bath. Or special lids. I only know how to use a food processor. And a mixer. And a knife. Forget pressure cookers. Forget double boilers. Forget deep fryers. I was raised on pots and pans. And not much  fancier than that. Well, I do like my wok.

I can’t tell you what inspired me. Perhaps it was the large package of raspberries that needed a home. They looked so pretty in the grocery. But yet there are only two of us. I was going to make raspberry muffins, but Manservant didn’t want sweets in the house. So, perhaps it was the claim that this would be jam in 5 minutes. Well, surprisingly, it almost was. Active time was about 10. Shocking, I know. Yes, you too can make jam. Well, at least raspberry jam. I haven’t progressed further than that.

I must look up if this works with grapes.  We still have a grape vine. And the last time I attempted grape jelly, I ended up with grape something that could be sliced with a knife. Maybe it could be a new version of quince paste. Scraping it off your teeth was definitely not an added bonus; unless you know a dentist that needs work.

Perhaps the raspberries inspired thoughts of biscuits. Biscuits always lurk in the deep recesses of my brain. I love biscuits. With butter and honey; and butter. I guess I said that. But biscuits go pretty, pretty good with raspberry jam. And they go pretty, pretty good with smoked pork loin and peach sauce, which was what Manservant ate on Father’s Day. That seems so long ago. 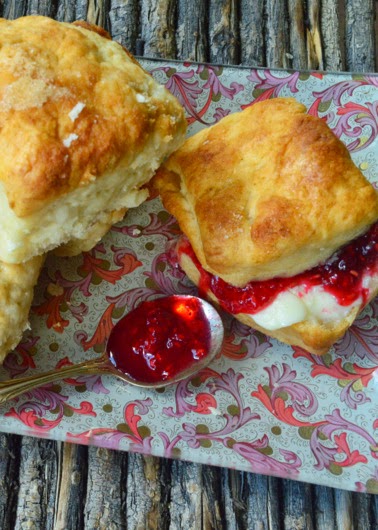 I was planning on getting this recipe to you last Friday, but Friday found me at the airport AGAIN.  I had to drive round trip two times. OR two times round trip. Manservant has not been having such luck with his flights, lately. He and Alex were heading to Houston to see Manservant’s folks and the airline cancelled the flight. The airline which shan’t go unnamed, the cheap ass airline SPIRIT, cancelled the flight. It appears that the flight crew hadn’t had enough sleep. Of course they knew this when the crew got in the night before, but it would be too kind of an airline called SPIRIT, to let their passengers know BEFORE they got to the airport.  It would be to considerate to let them know before the time they were supposed to board, so that every man, woman, and child wouldn’t have to race back to the main terminal and try to book a new flight; the new flight being one that didn’t go out until the next day. Spirit is just too cheap to rebook on other airlines. And I guess Manservant was too cheap to book another airline, so he is just considering this a lesson learned. When it comes to booking airlines let us just say that we have no SPIRIT left in us.

So after my third drive to the airport Saturday morning, and delivering them unto the SPIRIT, which involved waking at 6AM both days, I was tired. I am not an early AM riser. That is a fact, in case you wanted to know. SPIRIT did get them there yesterday, but that was one day late. Which makes this jam recipe three days late. Late is becoming my middle name.

But don’t let late stop you from making this jam. It is worth it. I love the subtle flavor of rose in this, but if you don’t or won’t, then just don’t. Add rose, that is. And go get some raspberries now, while they are cheap. Driscolls are my favorite when I can’t rely on mine. Speaking of which, I should have a good raspberry crop coming soon. So I guess that means more raspberry something. And I confess, I did use a thermometer just to see if the 5 minute thing really worked. It did. 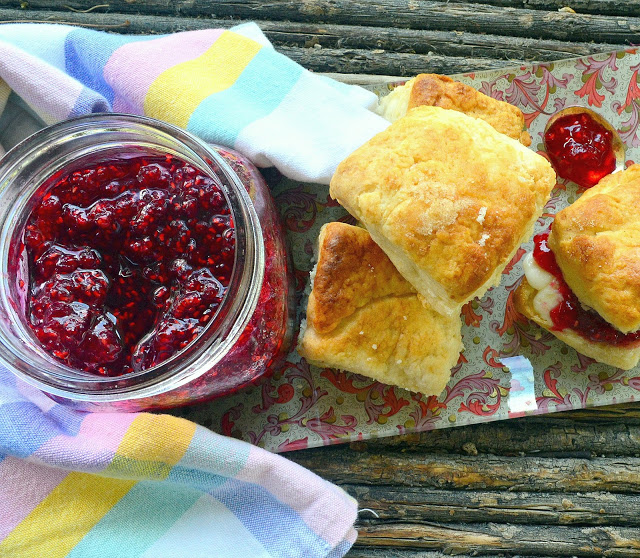 But the main thing I must share, in case there are other jam challenged folks like me – jam doesn’t look like jam UNTIL it has cooled. Now if I’d thought about it first, I would have understood that jelling takes time. And in my case it took about 20 years to realize this. SO! when you pour the jam into the jar, it looks like liquid. It is thin. It is a gorgeous red. It will not need to be scraped into the jar. It will pour. I said this twice so you will get it right. Don’t cook your jam until it looks like jam. It becomes jam in the jar. So hopefully this will get you jammin’ and not in a jam, because this is really worth it.

OK. Yes, I surprised myself. I’ve always been jam challenged. One other thing. This does require a scale. Now don’t think I am so accurate that I have a real scale. I have a Weight Watcher’s scale, over thirty years old, that still works. That is what I used. Do not skip this step. Really. I am told by my son, that scales are pretty cheap. I mean you do know that real pastry chefs weigh their ingredients?  No, I haven’t gone there YET! 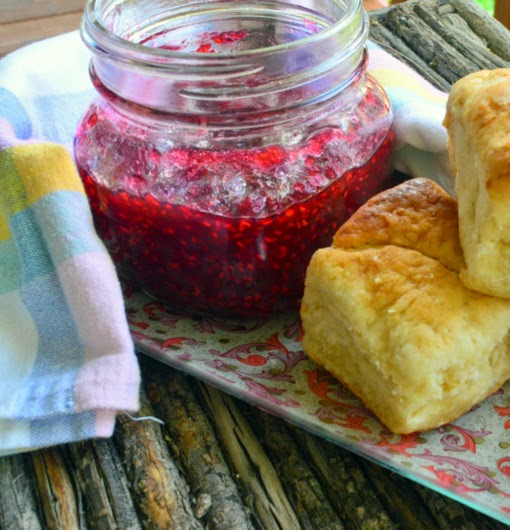 Put raspberries in a heavy, deep pot. Heat on medium heat until raspberries start to break up. There should be enough water still on the berries from the rinsing. Mash a little or stir with a fork to help break up, but this only takes about 5-10 minutes for them to soften. Don’t overcook the berries at this point because then you will lose the beautiful red color.

Take off heat and stir in sugar. Put back on medium heat and heat until boiling. Once mixture is  rapidly boiling, set timer for 5 minutes. The set point on a thermometer for jam is about 220 degrees, which means in Denver it is about 210. Not that this matters, because 5 minutes is what it took. But if you want the hard core facts, well, now you know.

Take off heat and stir in rosewater if desired. Pour into a clean jam jar. This should take roughly two hours to gel up. This will keep in a jar in the fridge for months. And please, do not ask me about canning or sterilizing or such matters, because this is what I know!

Disclosure: #Driscolls sent me coupons to try their product, but I have been buying Driscolls for years and have always been happy. All opinions are my own.

It looks perfect! Great job, looks like you've mastered jam. And roses with the raspberries - so perfect :)

Thanks so much Ami and thanks for visiting!

I love a homemade jam, they are truly the best! And, yours looks delish! Thanks for the tips too!

It is really good. And I must say better than what comes from the store! And fun to make!

Congratulations on a beautiful jar of jam! It looks amazing and love your stories :)

Thanks Tricia! I'll bet you make a lot of jam!