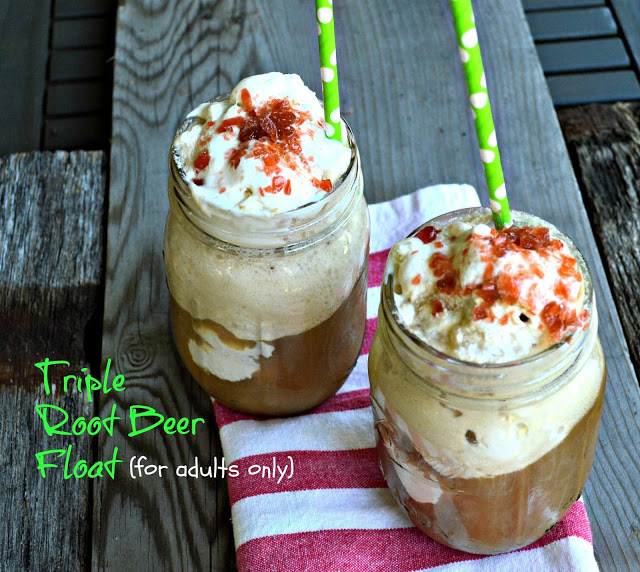 I love root beer. Root beer is the source of many fond memories for me. Long before the days that Kankakee had Kentucky Fried Chicken or Popeye’s, we had Lloyd’s. Lloyd’s was a grocery on the other side of town. Sunday nights found us often at Lloyd’s picking up fried chicken, Dad’s root beer and the best potato salad I can remember. But I was probably like 5 then and who knows how good it really was. Soda pop was a special treat for us as we always had milk at our meals, so being able to drink root beer was so over the top special.We were then parked in front of the TV to watch Walt Disney that came on at 6:30. I used to love Walt Disney. It always began with the NBC peacock. Remember that peacock?

But on to the root beer stand; the famous Jaenicke’s root beer stand located a bike ride distance from our house on the Kankakee River. It is painted orange and has a giant car port that one pulls up into. It used to be a waitress would meet you at your car and take your order. Those days are now gone, but the root beer stand itself is still there. From what I remember the drive in didn’t pay their waitresses minimum wage; they were just working for tips. Now you actually have to get out of the car and place your order at the window. I used to love that special tray covered with orange plastic mesh, hooked over the edge of the window. The only place I know that does that now is Sonic and even though I love Sonic commercials, it just isn’t the same. But Zoe and Manservant love it! 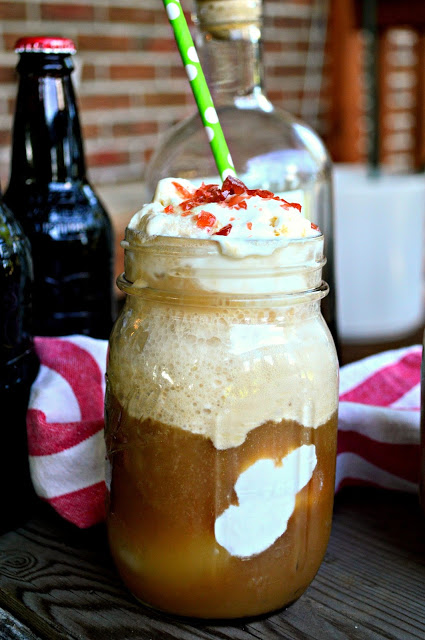 50 some years ago, A and W root beer was served in frosty, icy, giant, heavy mugs. The kind of heavy, glass mug that you were worried your kids would spill in the car. I swear A and W is not the same since they stopped serving root beer in those frosty mugs. I haven’t been to Kankakee in such a long time, but if I were ever close I would stop at the root beer stand. And I’d also order a sauce bun with onions. Well. I’d order two sauce buns with onions. What I’d give for that recipe!

And so it is that summer brought back my root beer memories. Or maybe it was the photo from my brother of his lap holding a sauce bun that he sent about a month ago. As my mouth started drooling, my mind went to work. And though I don’t have a sauce bun, I did make a pretty good root beer float. Using a no churn  ice cream recipe and some recently procured root beer extract, produced some great, but subtle root beer ice cream. Add to that this new liquor that Manservant discovered called Root. It is a very herbally root beer tasting liquor that he has made some awesome cocktails with. If you can’t find it I know there are other root beer liquors out there and if you can’t find those I’m sure a good shot of bourbon would do the trick, but truth be told, who ever turned down a root beer float even if it was a virgin? (That was a long sentence, wasn’t it?)

I served these for dessert and what a perfect ending to a simple summer meal. I also made one for Manservant a few days ago when he had a wisdom tooth pulled. (It ended up not hurting at all, but no-he didn’t turn up his nose at the float.) We sipped our floats while looking out at our yard that continues to improve with the help of our turf consultant. Yes, Manservant hired a turf consultant. He is so much better than a sprinkler guy and I’m NOT kidding! 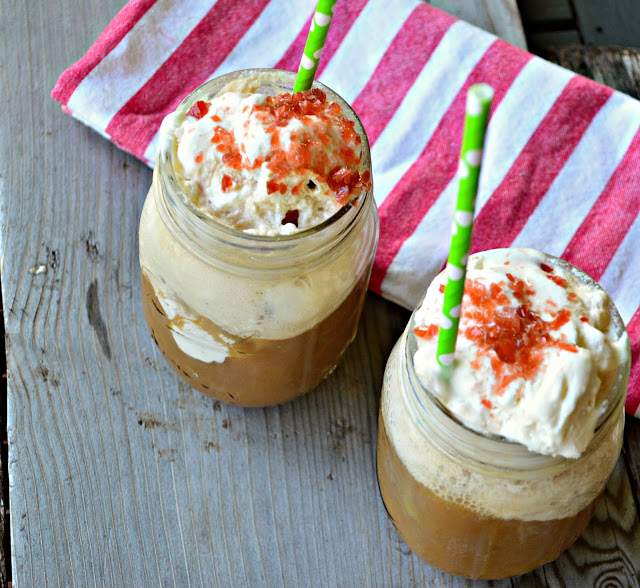 I hesitate to tell you that I used real IBC root beer to make these for friends. However, I did use diet A and W when I made these for Manservant and myself. Yes, there is a difference. IBC makes a great float. The A and W is good and maybe the fact that it was diet soda made it just not as good. The ice cream is a breeze to make and if you can’t find root beer extract just add some vanilla. Tradition is always a good thing! And the root beer liquor? What a way to chill!

Notes: The Root liquor has a very interesting background that you may want to read about. It also will tell you the story about how root beer came to be. (I won’t tell you who made the first root beer, but I will tell you it came about because of prohibition and it was first made in Philadelphia!) Check it out. For all you alcoholic drinkers Root has been compared to an Italian amaro. And here’s another good article from the Washington Post. 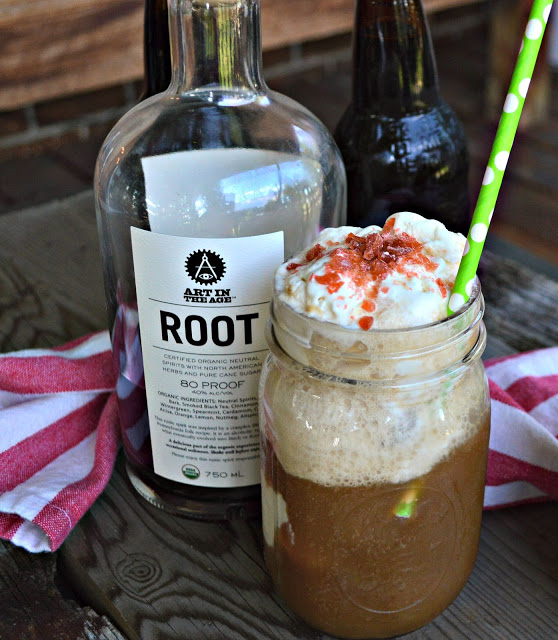 Directions:
Beat cream until stiff peaks are formed. In a large bowl combine condensed milk with extracts. Fold cream into condensed milk mixture. Stir well. spoon into a covered container and freeze. (If I had had root beer barrels when I fist made this I would have crushed some and stirred them into the ice cream.)

To Make Float:
Using a tall glass fill about 1/4 full with Root Liquor. Add 1 scoop of root beer ice cream. Fill to within 3/4 of top of glass. Add another scoop of ice cream. If there is still room, pour in more root beer. Garnish with crushed root beer barrels. (Which really makes this a quadruple root beer float.) Drink through a straw but have a spoon at the ready! 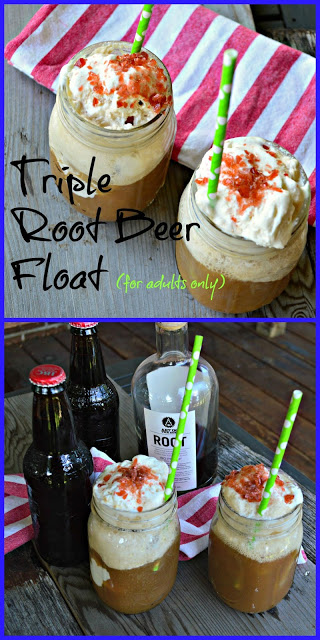 Oh my I would love this love this root beer float right now !! It's makes my mouth salivating!!

I can't even remember the last time I had a root beer float, but it definitely looks insulin worthy! Hugs!

Try sugar free Biz. My guess is you won't know the difference, but I did!

Oh happy that I am a grown up, these floats look irresistible!

Very funny Katalina! It is good to be grown up and this will make you feel young again!

As a teenager, I was a car hop at the A&W around the corner - fun job! I do adore a good root beer float still, and this version looks especially good for one of these hot humid summer evenings - thanks for a great recipe!

You are so welcome Donalyn! Being a car hop brought great tips in my day!

Australians don't drink root beer. It was the first thing I bought when Costco opened. I'm old enough to remember the roller skating A&W drive-ins where they put a tray on your window and you got the frosted glasses full of root beer along with your cheeseburger and fries. oh for the old days :)

I remember that too Maureen! Only I always got a saucebun with onions!