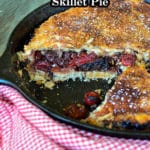 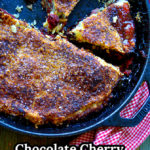 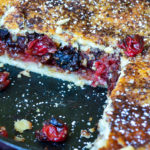 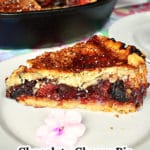 My favorite cherry pie begins with three kinds of cherries. Add in a flaky pie crust and lots of dark chocolate and get ready to swoon! 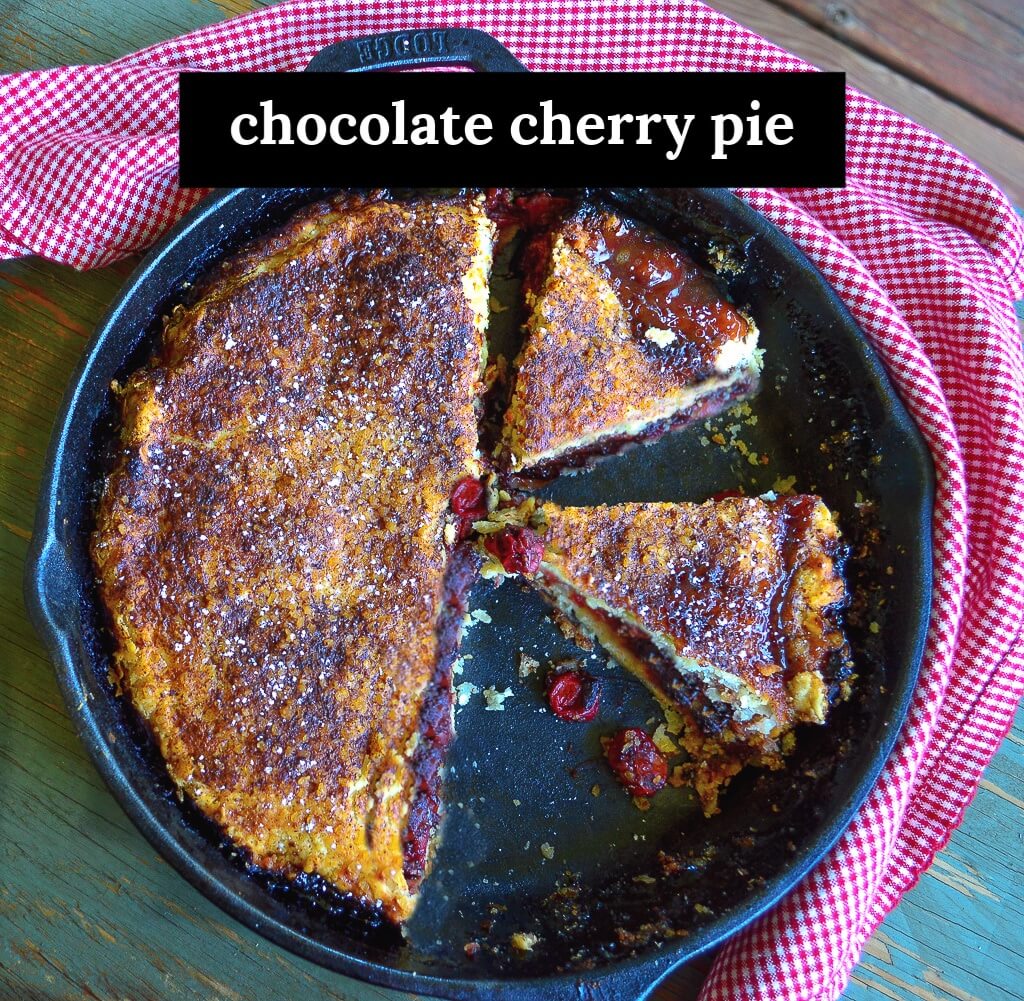 You deserve my favorite cherry pie recipe. Please do not take it lightly.

But a good pie crust is only as good as what it is filled with. Yep. That’s where these cherries step in. Glory, hallelujah! This pie is so cherrylicious!

This cherry pie has one extra special ingredient that makes this pie subtle, smooth and rich. It adds sweetness that balances the tartness of the cherries without overtaking them. 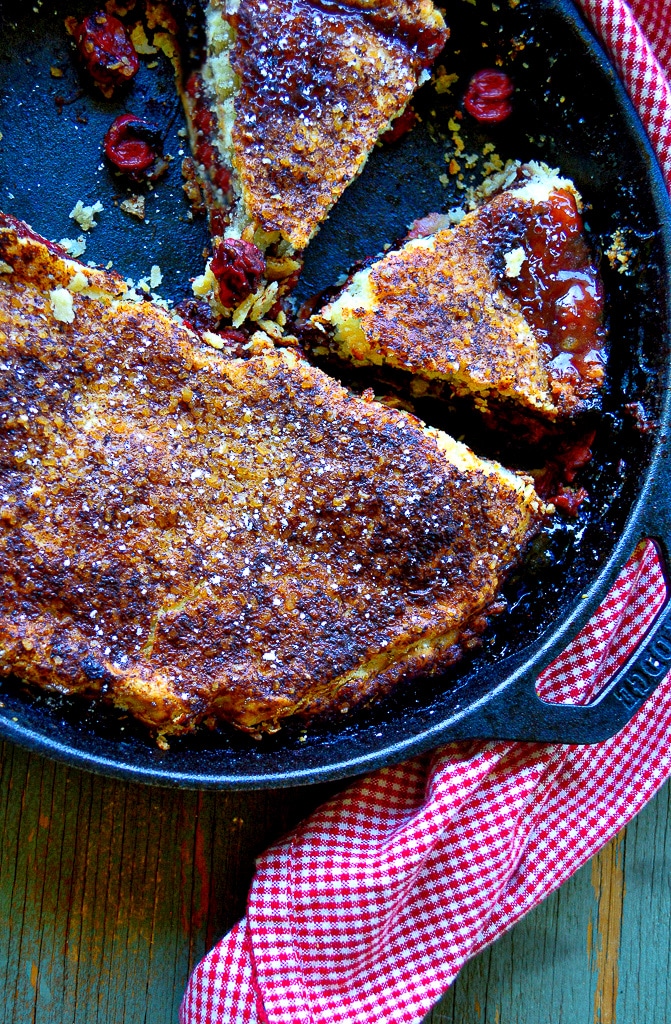 Oh My. Out with it. You know I’m talking about my best babe, chocolate.  I have to admit to having an aversion to those chocolate cherries that come in a box, but oh my, not these that come in a pie.

No, that’s not cinnamon sprinkled on the top of this cherry pie. You know, it’s chocolate, right?

This is one splendid cherry pie. My mouth is watering just thinking about it.

So what else did I do out of pure impetuousness? Is that a word? I decided to bake this pie in a cast iron skillet just like the Long I Pie Company. 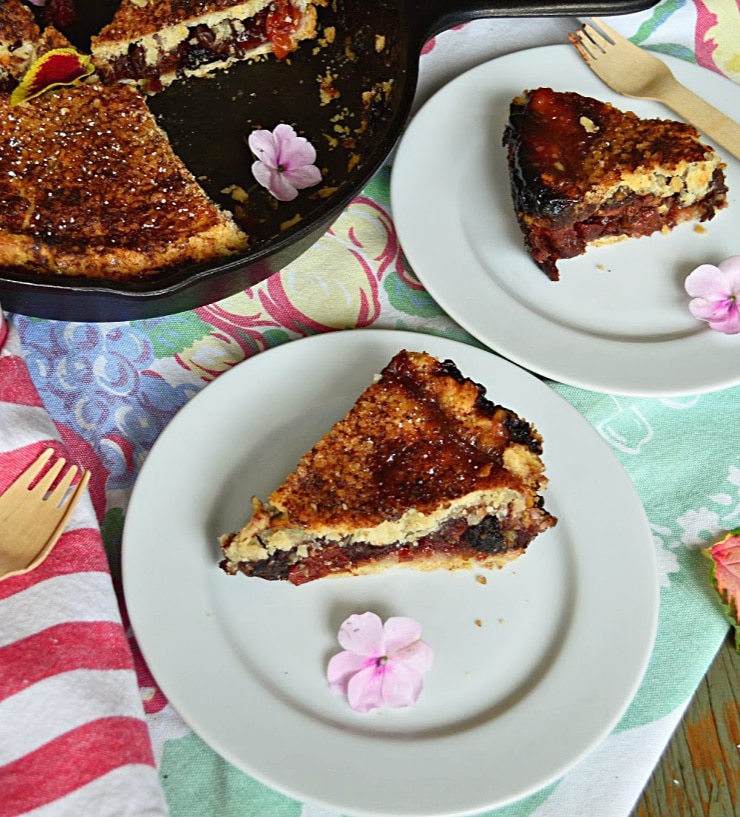 I have a great pie dish that I love. But baking the pie in a skillet gave me a thicker pie crust and I love pie crust. I can never decide if I love it more than the filling. We’ll call it a toss up.

Baking it in a skillet allowed me to have a thicker bottom and top crust. I just love that word crust, don’t you?

I always think the perfect crust is flaky, crispy and golden brown, kind of salty, and slightly sweet.  Who knew crust could be so complex?

Now the cherries. Luck was with me when I found sour cherries.  I thought I’d missed the season. For some folks life is a bowl of cherries but for me-well-I’d rather have them in pie! 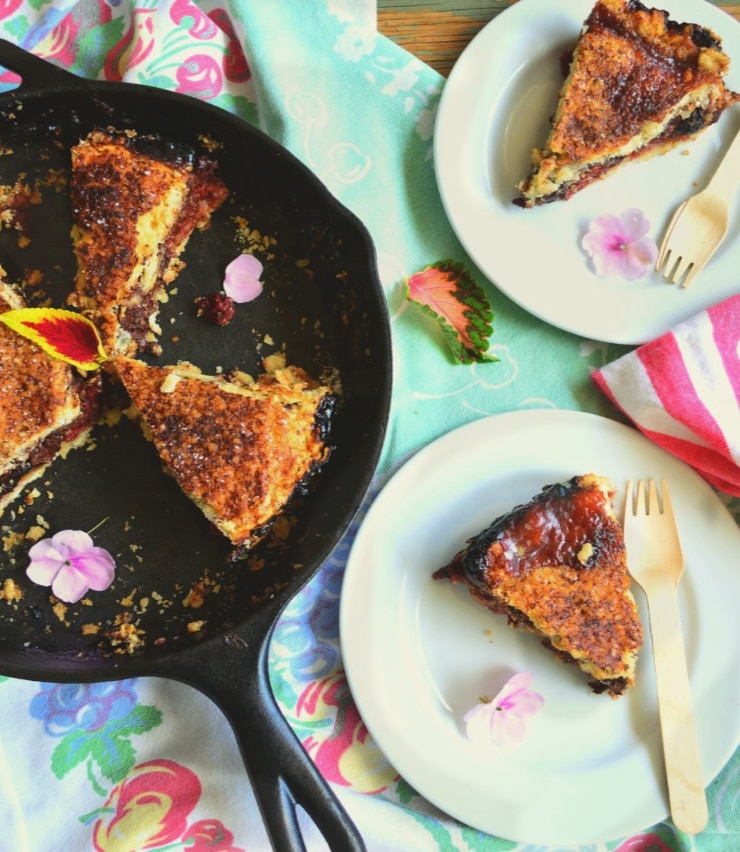 I love cherries and always take great pleasure when  baking a cherry pie or cobbler in the middle of winter. They remind me of summer and  of the cherry tree that used to be in our yard. (I think that’s why we bought the house!)

Finding an 8 pound container of pitted sour cherries  gives me enough for about 5 pies. I freeze them in 4 cup portions which is usually enough for one pie.

I’ve never added dried cherries to a pie but it was a great move on my part. These cherries added texture and bite and such incredible flavor that I think even if I skip the chocolate, I’ll always add dried cherries to my cherry pie recipe. 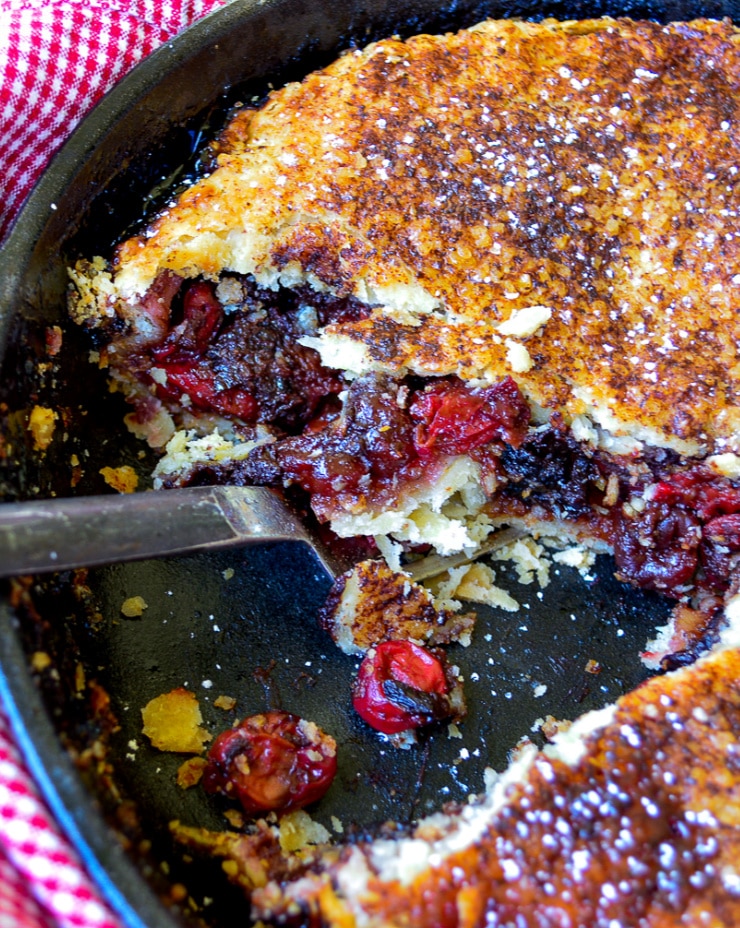 This cherry pie recipe was without a doubt, over the top incredible. Well. As long as cherries and chocolate are your thing!

Yes, it was my lucky weekend! For some that might mean winning the lottery or getting the closest parking spot. To me it meant strolling in the farmer’s market with good friends.

I adore gazing at summer’s bounty and tasting samples along the way. I always come home with too much, but that’s OK by me.

So now I have to squeeze in making plum jam and some refrigerator pickles. And one big heirloom tomato salad. Certainly the farmer’s market is no place to save money, but it is fun to buy things that often can’t be found elsewhere. 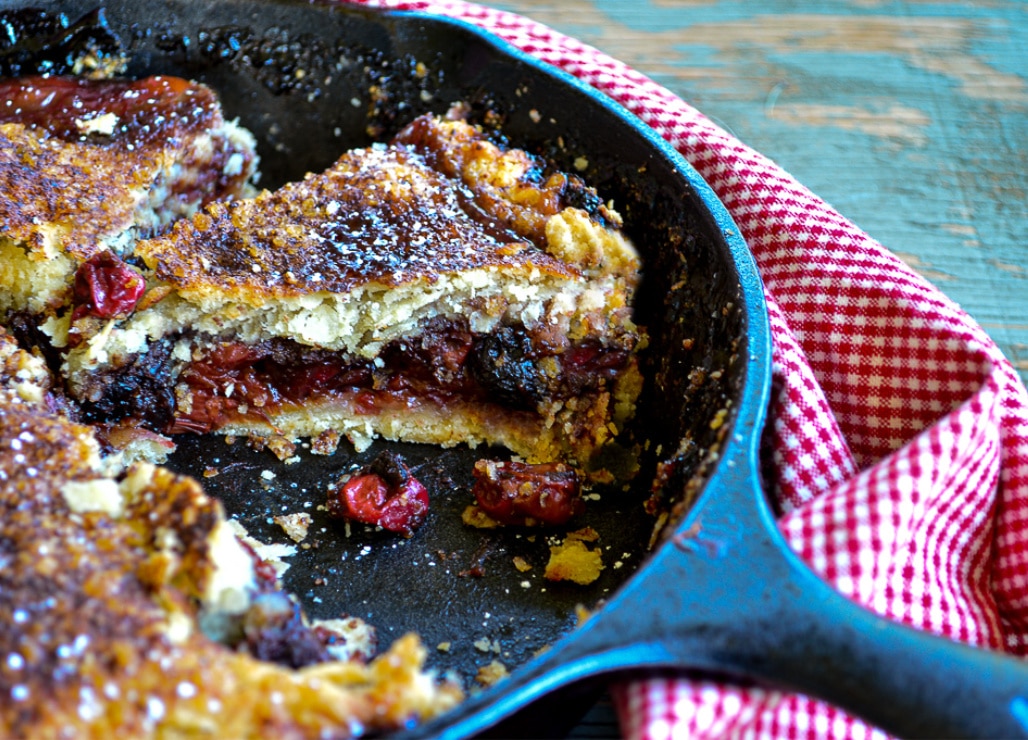 But back to pie. Now pie making skills are not my strongest suit, but recently the Denver Post published a story about a younger than me girl, that bakes fabulous pies from her trailer named Stella.

I saved the article and you know what? She is good. This girl rocks! I feel like pie crust and I finally came eye to eye!

Yes, it was a revelation and I finally feel secure baking a pie crust. Hallelujah! And Hurray for the Long I Pie Company!

Please visit a Farmer’s Market. It is where many great recipes begin! 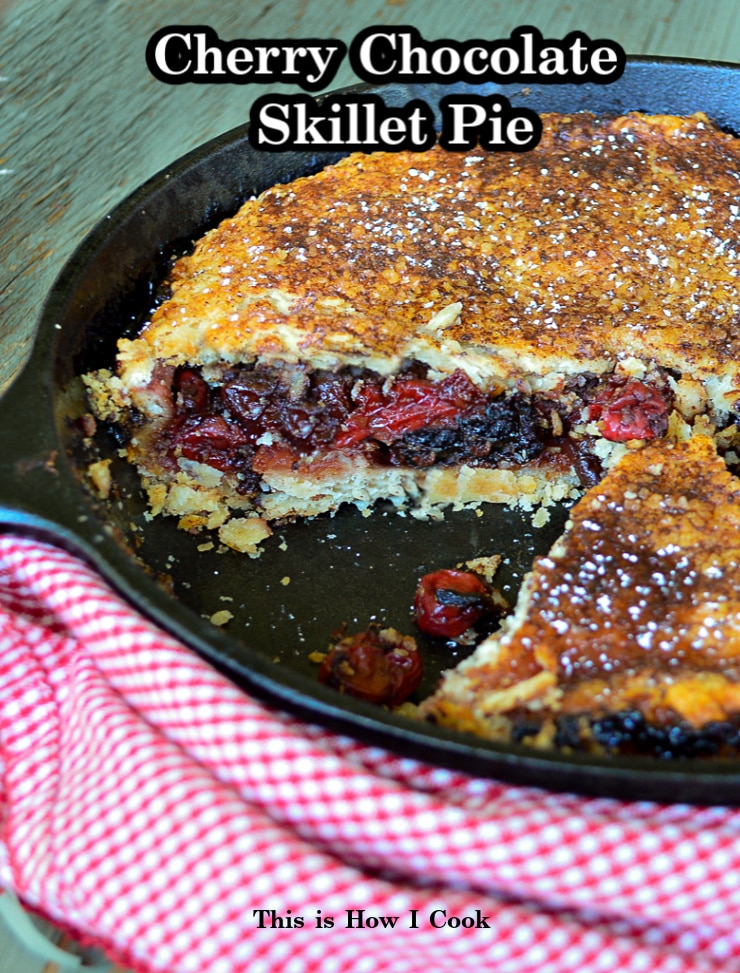 Triple Cherry Chocolate Skillet Pie is truly incredible. With three kinds of cherries and lots of flaked dark chocolate that sink into the cherries as the pie bakes, makes this one irresistible dessert.

The Very Best Pie Crust (from the Long I Pie Company)

"over the top incredible" - I'm sold. This looks delicious and how can one not love the combination of chocolate cherries. Dried cherries are amazing aren't they? I'm always surprised at how well they dehydrate to where they have almost the same flavor and texture of fresh cherries. Great pie Abbe!

I do love this pie MJ. And yes, dried cherries are amazing!

Well this looks fantastic!!! And served warm with ice cream? To die for. Printed for a future celebration.

Need to get this on our our dessert menu asap. This would be a fun one to serve with a BBQ. 2 our favorite things chocolate and cherries. You can't go wrong there!

What a great idea to bake a pie in a skillet! Love this cherry and chocolate combo!! I’ll take a slice or two!

What a great idea to bake a pie in a skillet! Love this cherry and chocolate combo!! I’ll take a slice or two!