Skip to Content
Today is George Washington’s
Birthday. A long, long time ago when I walked miles to school we celebrated George’s
birthday on his real birthday. I don’t think President’s Day was invented yet. And
when I walked those miles home all by myself, or with my brother, and no one
worried about stranger danger, we were greeted with cherry pie. In honor of
George, of course. Because he chopped down that cherry tree; because he could
not tell a lie. Which is just a myth, don’t you know?
In any case, thanks to
George, my mother would buy a frozen pie and sprinkle the top with sugar before
she put it in the oven and we had cherry pie for dessert. I don’t remember
having many desserts, at least at the kitchen table, so this was very special.
It was delicious; even if it was frozen. I think it is still my father’s
favorite pie. So today when I give thanks to the founding father of our
country, I also give thanks for cherry pie.
Years ago when we bought
our home there was a cherry tree in the back yard. It has long since passed to wherever
cherry trees go when they can no longer show us their delicate pink blossoms. I
though it was a good sign we had a cherry tree and I wish we would plant a new
one. For many years we were blessed with cherries which meant pies and a really
good cherry cobbler. Since its demise I have had to find fresh, sour, pitted
cherries at the farmers market to bring home and freeze. The last few months
have found me subscribing to frugality which means my freezer is quickly being
cleaned out. It was during this discovery process I found enough cherries to
bake one more pie. Thank you George!
(And as a side note I will
tell you that our Skye Terrier is named George. The breeder we bought  from
gave him his name. She also told me she named his sister Martha!)
But back to the pie. When I
discovered the cherries, I also discovered that I was out of butter which meant
I couldn’t make a pie crust. So necessity being the mother of invention (was
that Ben Franklin?) I decided to do a Momofuku. Go look up his cookbook. David
Chang. I love his stuff. He is the one that makes awesome Japanese food and has a bakery where he makes cookies and then crumbles
them all up to make crack pie. It’s good. I made it once. So, you guessed it.
My freezer had cookies, too. These were not my faves which is probably how they
ended up in the freezer. Not that they weren’t good cookies but I tend to like soft,
chewy cookies and these are chewy, but crisp. Luckily, I had a refrigerator pie
crust leftover from God knows when, and I decided to use that as my bottom
crust and crush up my leftover cookies for a really good crumbly top crust. A
bit of a streusel, you say.
Now lest you think you
must go to the trouble and make the cookies for the crust I say, fear not. Use whatever
crust you want for this pie. The refrigerated Pillsbury ones that come rolled
up in the refrigerator aisle will suffice. And I say that crust is good, but in
this case it is the filling that counts! Those cute little tart cherries with a
hint of cinnamon are killer. But if you do decide to bake the cookies they will
be an added bonus because then you can eat cookies AND pie. Yes, the cookie
recipe makes enough for you to have leftovers. I mean leftover cookies, it doesn’t get much better than that. So once
again-thank you George!
A few notes on cherries:
You may be able to find frozen sour cherries in the freezer case, in which case
use them. You can also buy sour cherries in a can. I, repeat after me, do not
like cherry pie filling. Make your own. It is SIMPLE!
A note on crust: Use your
favorite. Make a graham cracker crust. It’s the cherries that count. But I do
love a good crust so we will revisit crust at a later date! 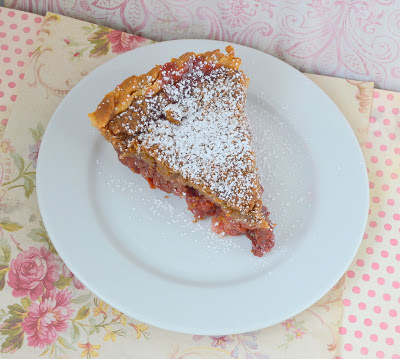 Not My Mama’s Cherry
Pie
Decide on your favorite bottom crust. Make it.
4 c pitted sour cherries drained but save ½ c cherry juice
1 c sugar
1 T flour
2 ½ T cornstarch
¾ t cinnamon (If you like)
2 T cold unsalted butter, cut into small pieces
Preheat oven to 400 degrees.
Put sour cherries and juice in a large mixing bowl and sprinkle in
the sugar, flour, cornstarch and cinnamon. Toss well and place in your choice
of bottom crust. Dot with the 2 T butter.
Top with streusel and bake for about 45 minutes. If top starts to
get too brown (like mine did) cover with foil. You can later sprinkle with
powdered sugar to hide that unsightly too brown streusel!
For the streusel:
Toasted Coconut
Cookies
– (Gourmet Today) Makes about 6 dozen (Don’t worry. Your pie will not taste like
coconut.)
1 ½ c sweetened, flaked, toasted coconut
1 ¼ c all purpose flour
1 t baking soda
½ t salt
1 ¼ c unsalted butter, softened
½ c packed brown sugar
¼ c sugar
1 large egg
1 t vanilla
1 c white chocolate chips (my addition to recipe)
Place rack in middle of oven and preheat to 375 degrees.
Spread coconut evenly on baking sheet and lightly toast in oven,
stirring once, until pale golden, about 7 minutes. Cool.
Stir together flour, baking soda and salt in mixing cup.
Beat butter and sugars in a large bowl with electric mixer until
pale and fluffy. Beat in egg and vanilla. Reduce speed to low and mix in flour
mixture and coconut and chips (if using) until well combined.
Place level teaspoons of dough about 1 ½ inches apart on parchment
paper line cookie sheet. Bake in batches until golden, about 8-10 minutes. Cool
on sheet for one minute.
Freeze 15 cookies to use for streusel.
Streusel Topping
Put your
leftover 15 frozen cookies in a plastic bag and pound them until crumbly.
½ stick
unsalted butter
½ c
unbleached flour
½ t
cinnamon
¾ c brown
sugar
Using a
pastry blender cut butter into cookie crumbs and flour. Stir in cinnamon and
sugar. Sprinkle streusel over unbaked pie.
Click here to cancel reply.

That is one good looking cherry pie! And coconut cookies? Yes please.

Thanks Angie. If you like cherries than this is your pie! You should bake one this weekend! Have a good one!

You just remind me that I haven't baked any pie in ages! The pie looks divine with cookie streusel.Have a wonderful weekend!Angie

Thanks Meirav! I hope you enjoy them!