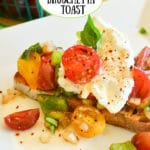 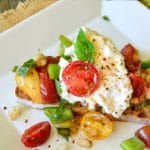 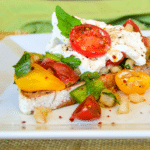 Tomato Bruschetta Toast is a perfect breakfast, lunch or appetizer. Make with every tomato variety you can find. This is amazing! 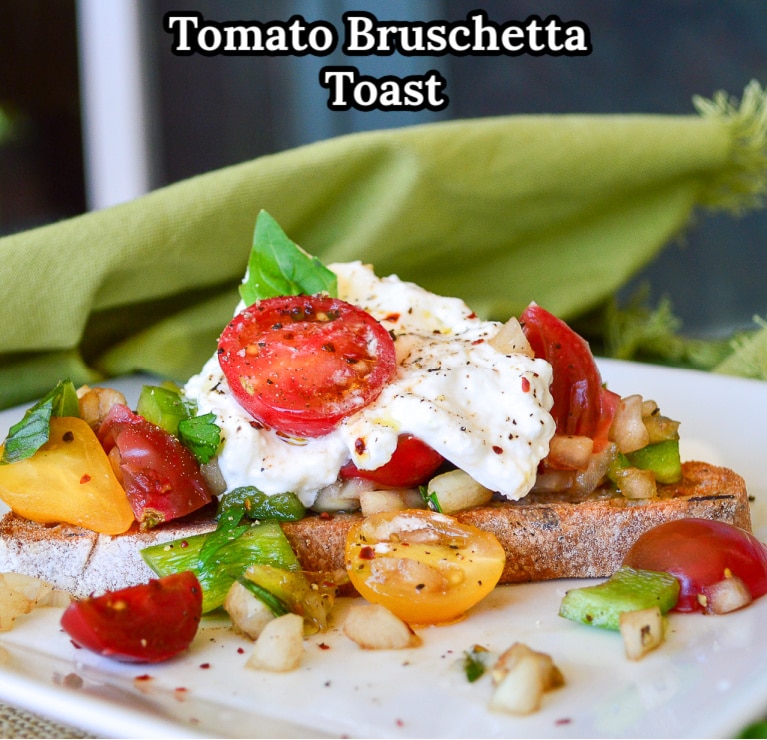 This warm September morning I had this tomato bruschetta toast for breakfast. Yesterday I had this for dinner. And I also had it for lunch.

As a child I hated tomatoes. I did like them in ketchup form and of course, that was way back before I’d even heard of salsa.

So other than eating tomatoes as spaghetti sauce or chili, I really never ate tomatoes. Even tomato soup wasn’t on my radar screen.

My mom did buy tomatoes. I think back then they were the cold, refrigerated kind. Except when it was summer. 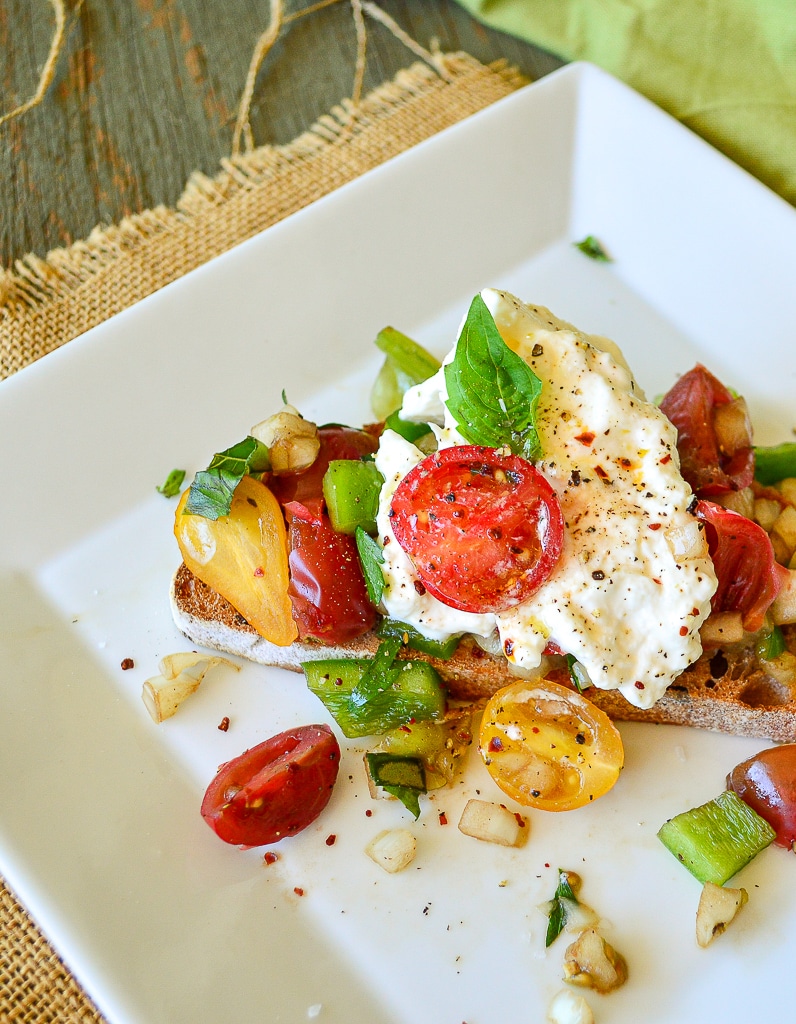 Summer found us at the little farm stand on Court Street with the sand floors. It was always cool inside even though it was an open air stand.

The front door always had bunches of gladiolas in every color of the rainbow to greet you. They came in bunches of a dozen for 99 cents. It was always hard to choose my favorite color.

We also bought fresh corn there. My guess is that they were 99 cents a dozen also, but I don’t remember.

I think the hardest thing and that which took the longest, was when mom chose tomatoes. She would pick up each one and check for bruises. Then she would smell them as if she was choosing her favorite perfume.

Then she would set them aside and get a brown paper bag and start placing them carefully inside. As we got into the car we were always told to, “Watch the tomatoes!” 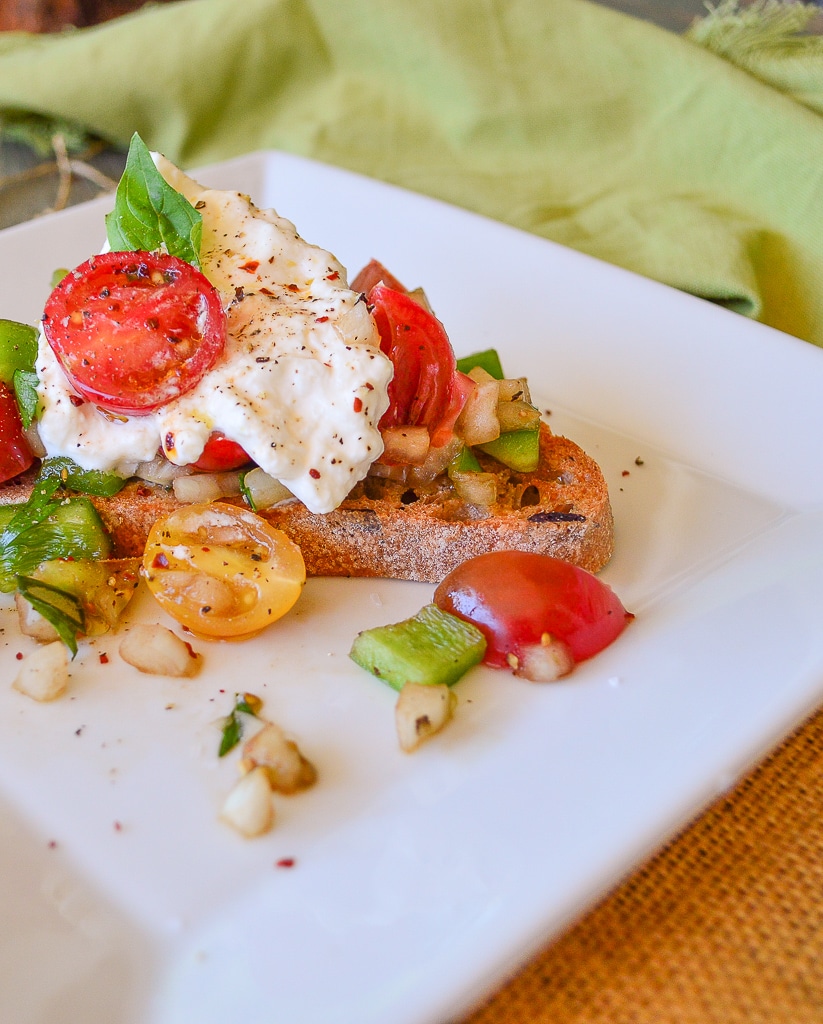 Upon arriving home the tomatoes were gently placed stem down, on the window sill where upon they sat until she sliced them into giant rounds and sprinkled salt and pepper on them.

Sometimes she served them with cucumbers and sliced onions. Sometimes she just ate them straight up. And all this time I wouldn’t eat them. A tomato did not cross my lips.

Even when she started growing them herself, I never ate a tomato. I didn’t even eat fried green tomatoes, which my mom made once a year. I mean really! I didn’t eat something fried?

I am sure that my mother never wanted us to like tomatoes because some things you just want all too yourself.

It really wasn’t until a few years ago that I ate tomatoes. They were probably in the form of a caprese salad. 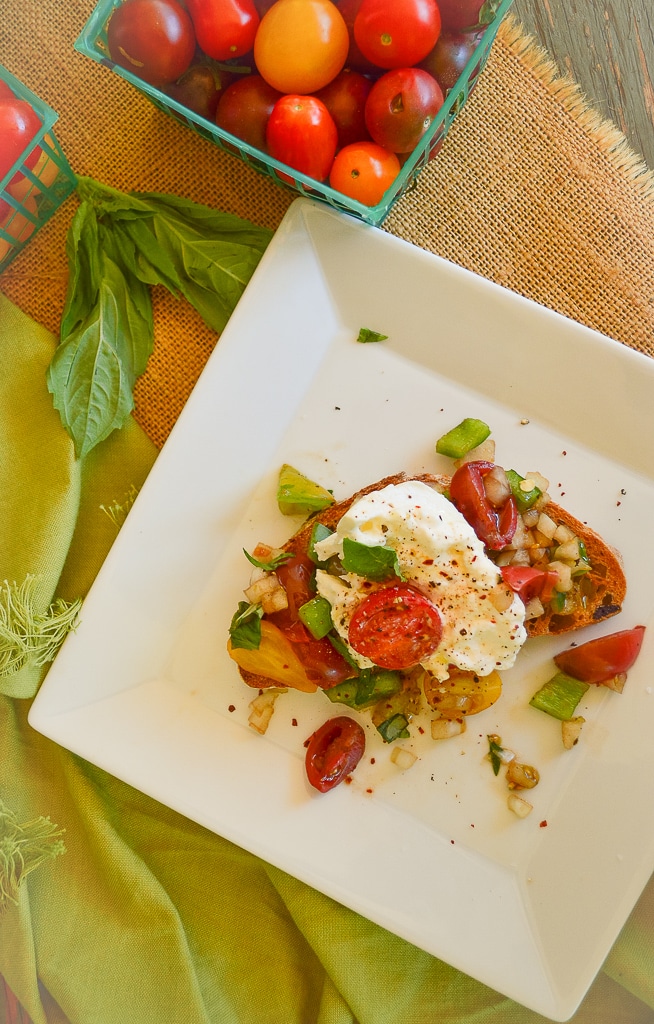 It is hard to resist cheese, even when they are  served with tomatoes. I guess it was all over for me then, as I quickly discovered what I’d been missing for some 50 years.

What’s the difference between tomato bruschetta and tomato toast?

Bruschetta is usually eaten as part of an antipasto (appetizer) platter  in Italy. There are a million ways to eat bruschetta, which is usually defined as grilled bread rubbed with garlic and olive oil. The toppings are numerous but tomatoes are very popular on bruschetta.

Toast is just that. There is no reason not too toast. Unless you want to grill or broil! So yes, the difference between both is negligible in my opinion, unless you want the traditional Italian version.

Can I substitute something for the green peppers?

Now many of you may not like green peppers. I hated green peppers as a child and there was no such thing as red ones back then.

Really. I don’t think I saw a red pepper until I was 23 and in Israel, where I don’t believe they have green peppers! 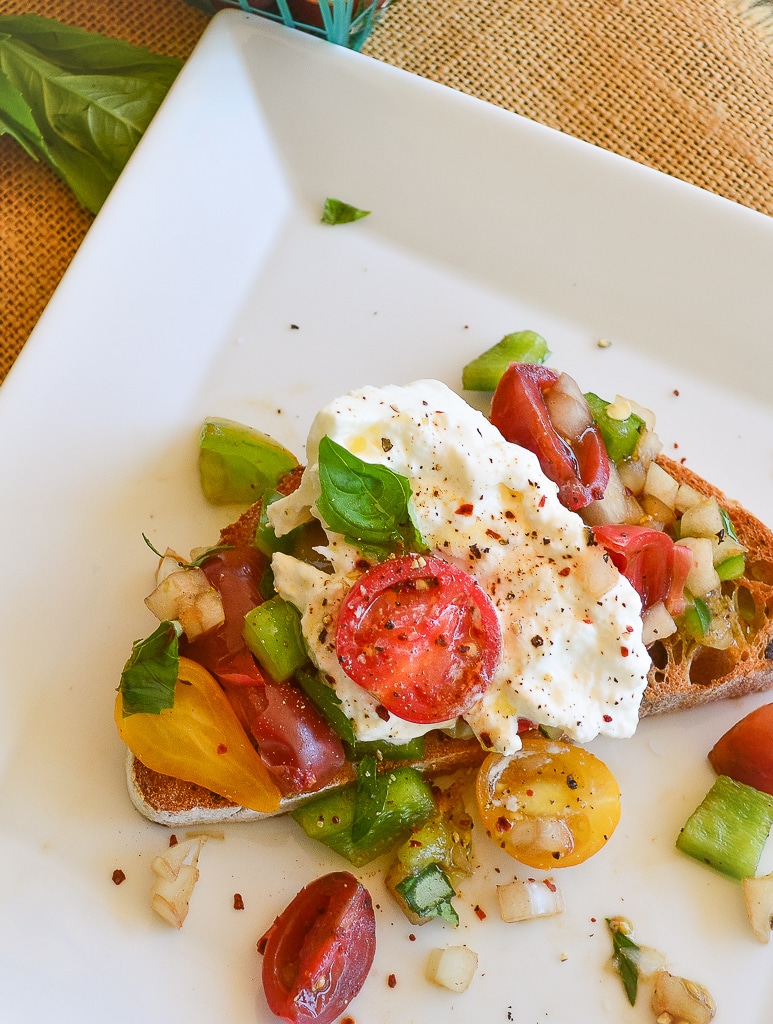 I love the crunch and flavor that the green pepper gives to this simple recipe. However red peppers will work, as would celery.

Still to this day I don’t like green peppers, unless it smells like a green pepper. It needs to smell just picked and pungent and then and only then, will I eat it.

I’ve had good luck this year finding really good green peppers. Just look for that smell. It just may change your mind! My guess is that they are the freshest and the others have probably been refrigerated.

Now is tomato season so make sure to get your fill.  Heirlooms, red and yellow pear tomatoes, green zebras, early girls, romas, beefsteaks, brandywines celebritys, San Marzanos….the list could go on and on.

I even love the names of the tomatoes. They are all so pretty, I hate to eat them. Each has their own individual taste. So get them while you still can. Summer’s bounty will be gone before you know it.

My salad toast is about as simple as it gets. Yes, you could eat this just as a salad, but there is nothing like a good hunk of bread to soak up all that tomato goodness. 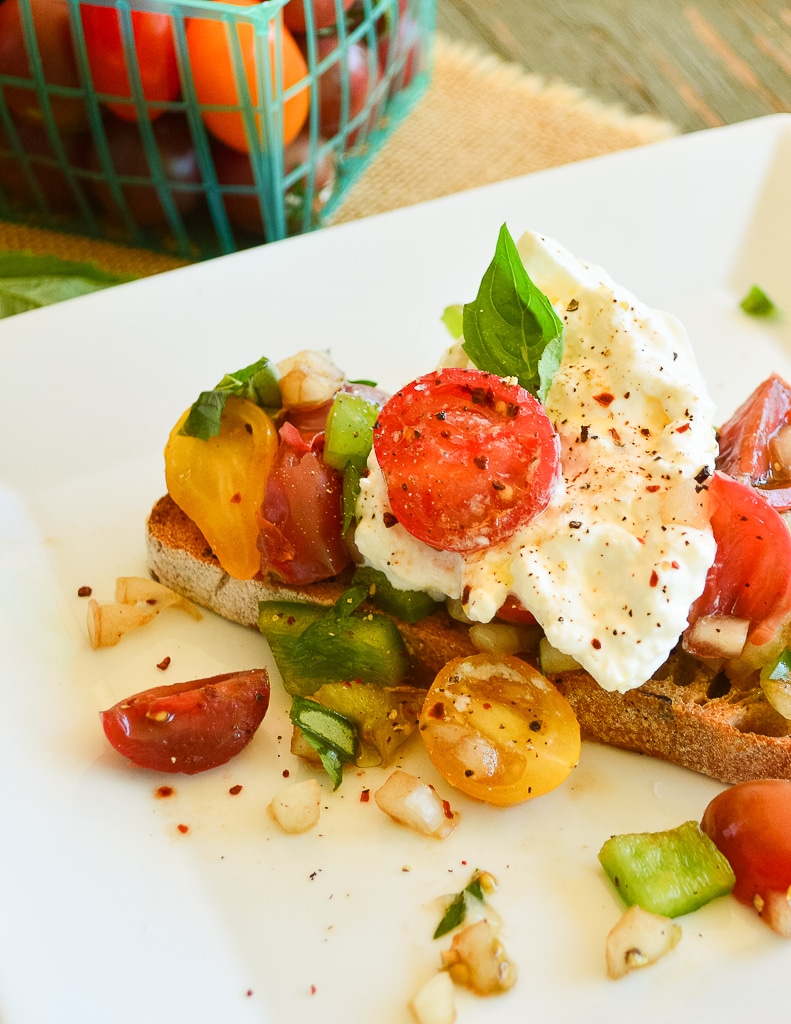 Please make sure all ingredients are at room temperature. Even the cheese!

And please never refrigerate tomatoes. That is a no no!

Make sure you have good artisan bread. This is a salad of flavor and texture and is pleasing to the eye. And we all know we eat with our eyes, don’t we?

A Few More with Tomatoes: 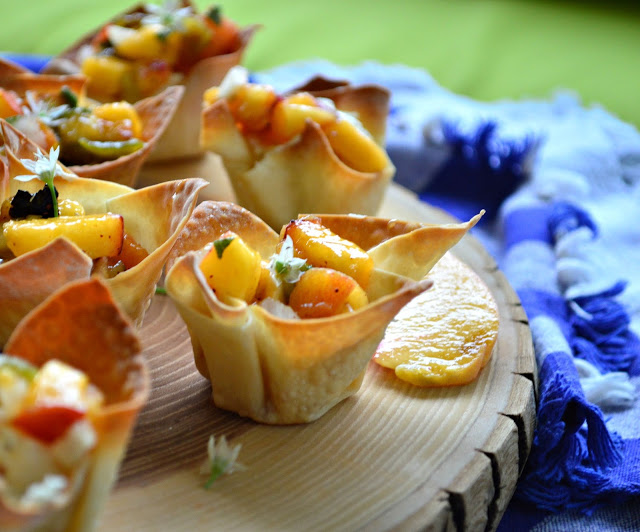 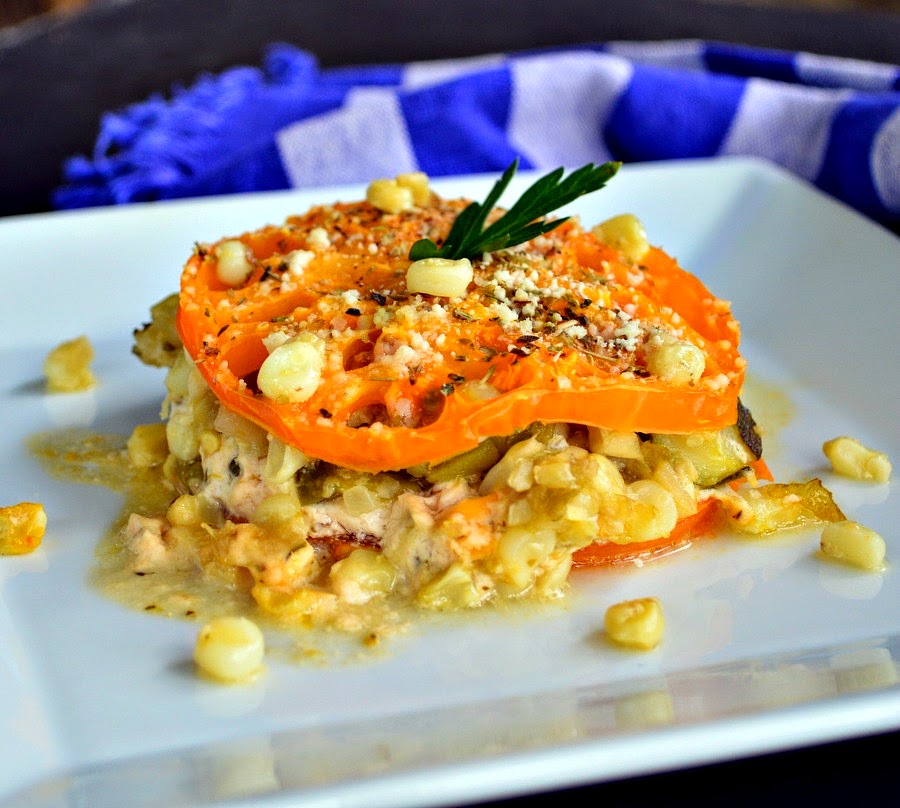 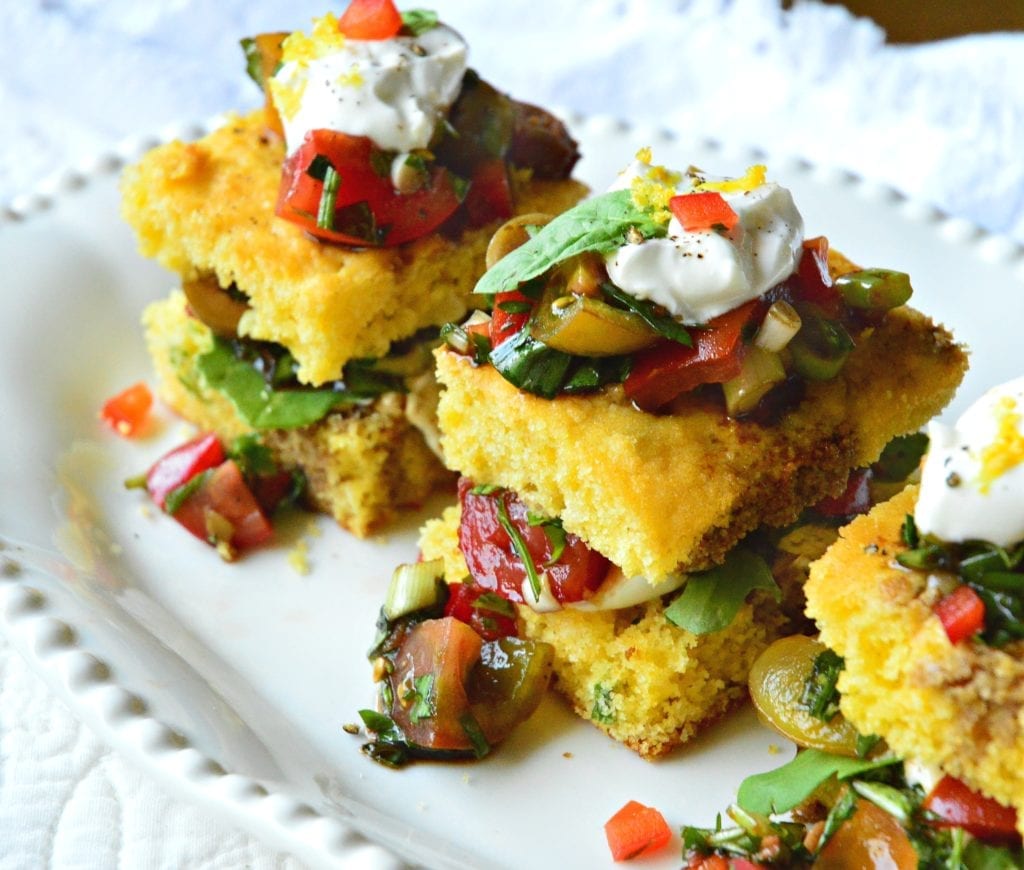 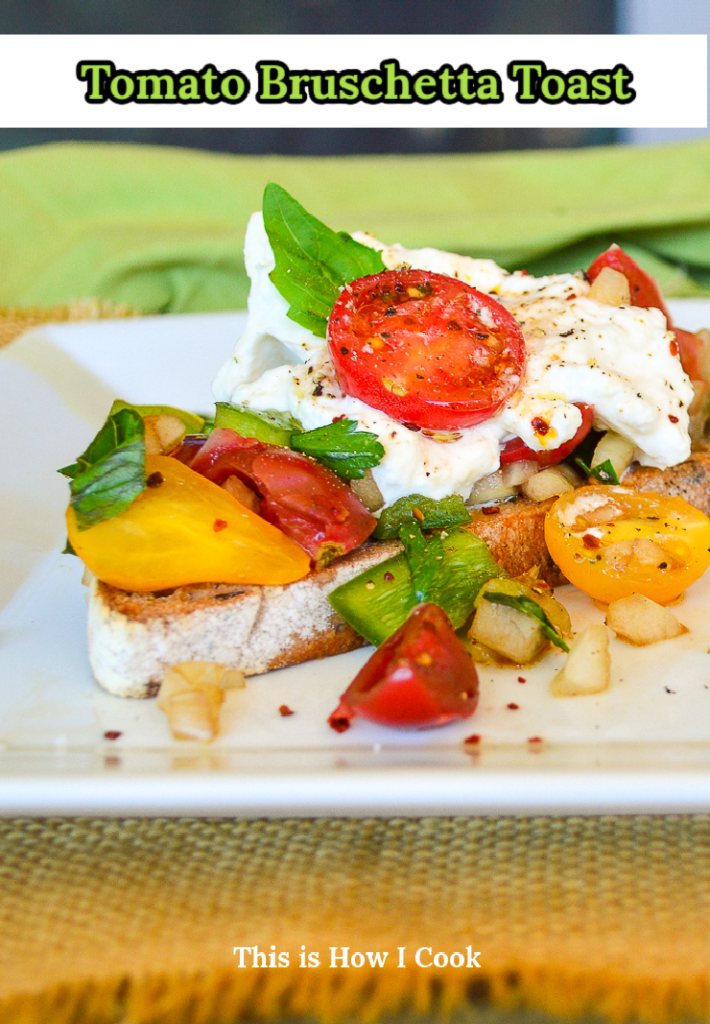 This tomato bruschetta toast is  a perfect summer time breakfast, lunch or appetizer. Use ever variety of tomato you can find.

Olive oil to drizzle
4 slices of artisan bread toast (I use Udi’s Italian wheat.)
2 balls of burrata sliced in half
Pinch of chile flakes, if desired

In a bowl combine onions, green pepper, tomatoes and olives.

By now some of the juices of the tomatoes have collected in the bottom of the bowl. Take a spoonful and drizzle over toast.

Place a large spoonful of tomatoes on top of that. Then half of the burrata ball.

Drizzle with a little olive oil and a bit more pepper. Serve with a knife and fork.

We've been making a similar appetizer recently, but eating it as a meal. We top bread fresh mozzarella pieces and olive oil and then grill it. The tomatoes go on afterwards, and it never lasts long! However, I'm intrigued by this version. Burrata instead of mozzarella! (Genius) And the addition of olives, too. (Even more genius) I'm totally going to have to up our appetizer game with this version, Abbe!

Wow, that is almost a salad! Looks so delicious!

Delicious carefree easy recipe for the summer. With a glass of wine and eating alfresco, this would be sublime. Thinking the Farmers market might be calling us this weekend. Missing some good heirloom tomatoes.

Such a pretty dish! Bruschetta/Toast -- same thing in my book. And in my book, good stuff. :-) Neat recipe, and we're getting great local tomatoes, so this is timely. Thanks!

There’s nothing better than heirloom tomatoes this time of year, and your bruschetta looks amazingly delicious! Hope you are having a good and safe summer!!