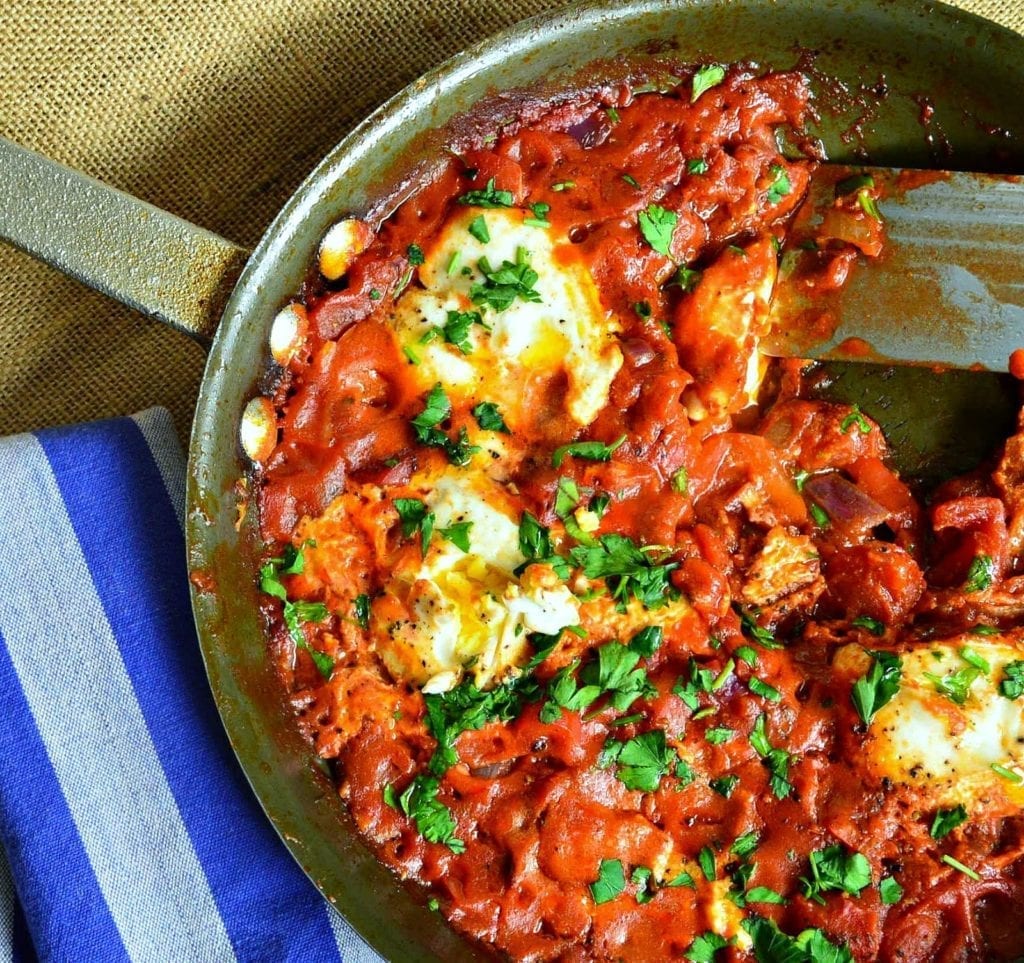 My love affair with Shakshuka began on Thanksgiving. Amidst the chaos of cooking for the big day, my son decided to cook eggs for everyone. Not that there were too many of us around, but I am always a bit stressed until the big meal is ready. And as many of you might know, Thanksgiving does involve a bit of cooking. Breakfast with Alex usually means starting about 11 AM. It means removing everything on the counter to make room for everything HE wants to put on the counter and to put it gently…Alex is a messy cook, though he is a great entertainer. The music is always going and he is so busy talking when he is cooking, that nothing is put away, thrown away or wiped, until long after the meal is eaten; which works well, except on Thanksgiving.

Not that Alex isn’t a great cleaner upper. He is a very good cleaner upper, but well, Alex works on Alex speed and that usually isn’t fast enough for me.  Prep it. Cook it. Eat it. Clean it. Doesn’t always work that way with Al around. But like I said, he does clean up very well and happily; unlike his sister who is always rushing to get somewhere and is a bit of a boss woman when she is ready to go. She knows it!

Thinking back, I must say that taking the time out on Thanksgiving, even with the chaos of the day was very special. And comforting. And fun. Even Manservant came in from smoking the turkey. And damn, those eggs Alex made were good. Really good. So good that I now keep them in my repertoire. So good, that the friend that was over keeps asking for the recipe.  As if he had one. I’m not even sure of where he came up with this because I never made them for him. He called them Eggs Purgatory. Purgatory wouldn’t be a bad place to be, if you could eat these eggs. 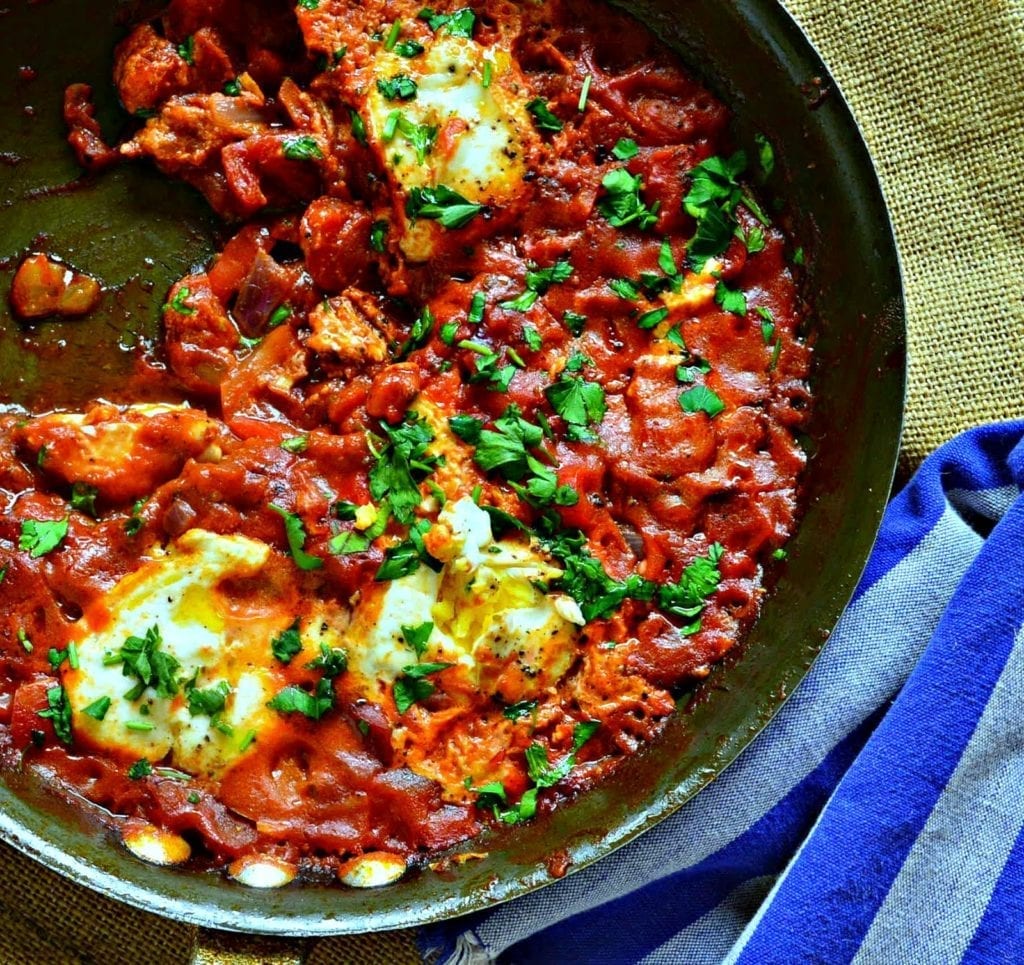 They were earthy and soothing and totally comforting. Add a piece of toast-spread it with tomatoes and dip it in the yolks and you won’t come up for air. You just eat. Quietly. Savoring every bite. Then with a deep satisfied breath you slowly lift your head and ask if there’s more toast. And perhaps-just perhaps- have a swig of beer, and then dive back in again. The mix of eggs and tomatoes and toast-well-who would have thought that this would create such a warm and sultry entree. Certainly this would impress any girl person who so happened to need breakfast in the morning.   Hmmm. Now that’s something Alex may know about.
These eggs would suffice for brunch, lunch, dinner and even I suppose, breakfast. I’m not even a fan of sunny side up eggs, but Manservant sure is. He believes most everything tastes better with a fried egg on top. But I love these eggs. They are best prepared after a very late night out on the town and while wearing only boxers. And though I have no idea what was in Alex’s recipe, I can guarantee that mine taste great, too. But as far as I’m concerned, everything tastes better when Alex is cooking. You’ll just have to take my word for it.

Shakshuka eggs come from Tunisia. Home of harissa and spicy things. They are believed to have made their way north to Italy where they became eggs from purgatory. These eggs probably started as a Jewish dish. You can read the history here and decide for yourself. Truth is, it doesn’t really matter. Just eat the damn things. Feel free to vary the recipe. Add some peppers. Add some chili, some smoked paprika, some cheese. Some cumin, some yogurt. Whatever you have around. Make them yours like Alex made them mine! 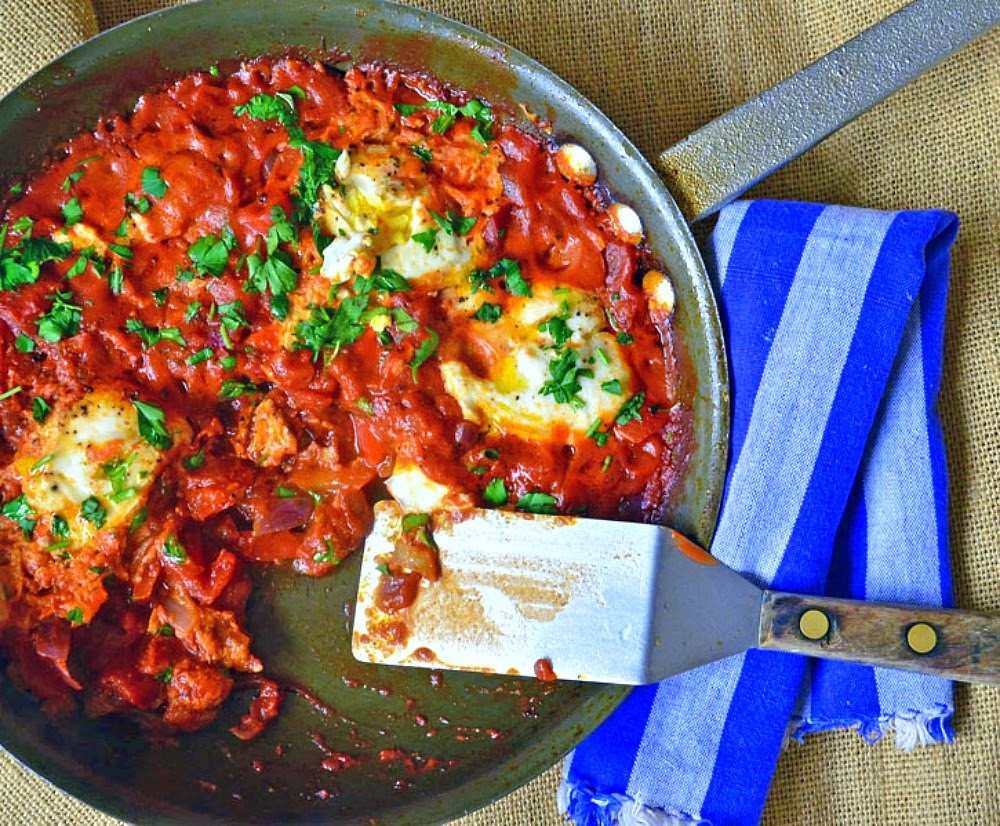 Ingredients:
2 T olive oil
1 chopped onion
1 clove of garlic, minced
1/2 red pepper, chopped
2 t harissa chili paste, sriracha or optional
1 can diced tomatoes, drained
1/2 can tomato sauce
1/2 t marjoram or more if you like
4 eggs at room temperature
6 T ricotta or goat’s cheese
salt and pepper
Directions:
Heat olive oil in a medium to large skillet over medium heat. Add the onions, garlic and pepper. Cook for about 5-8 minutes to allow the veggies to soften and turn lightly colored. Add the chili paste if using, marjoram and the tomatoes. Let this cook at a gentle simmer for about 5-10 minutes so flavors can meld and the mixture thickens a bit. Make 4 wells in the tomatoes and crack an egg into each well. Dollop ricotta or goat’s cheese also into the tomatoes. Cook about 8-10 minutes until the egg whites are set. At this point you could also cover the skillet with a lid and the eggs will cook faster. When eggs are set, remove from heat and let sit for a few minutes so eggs can settle.Serve with good toast! Perhaps a beer. Lots of music. And make your family swoon. 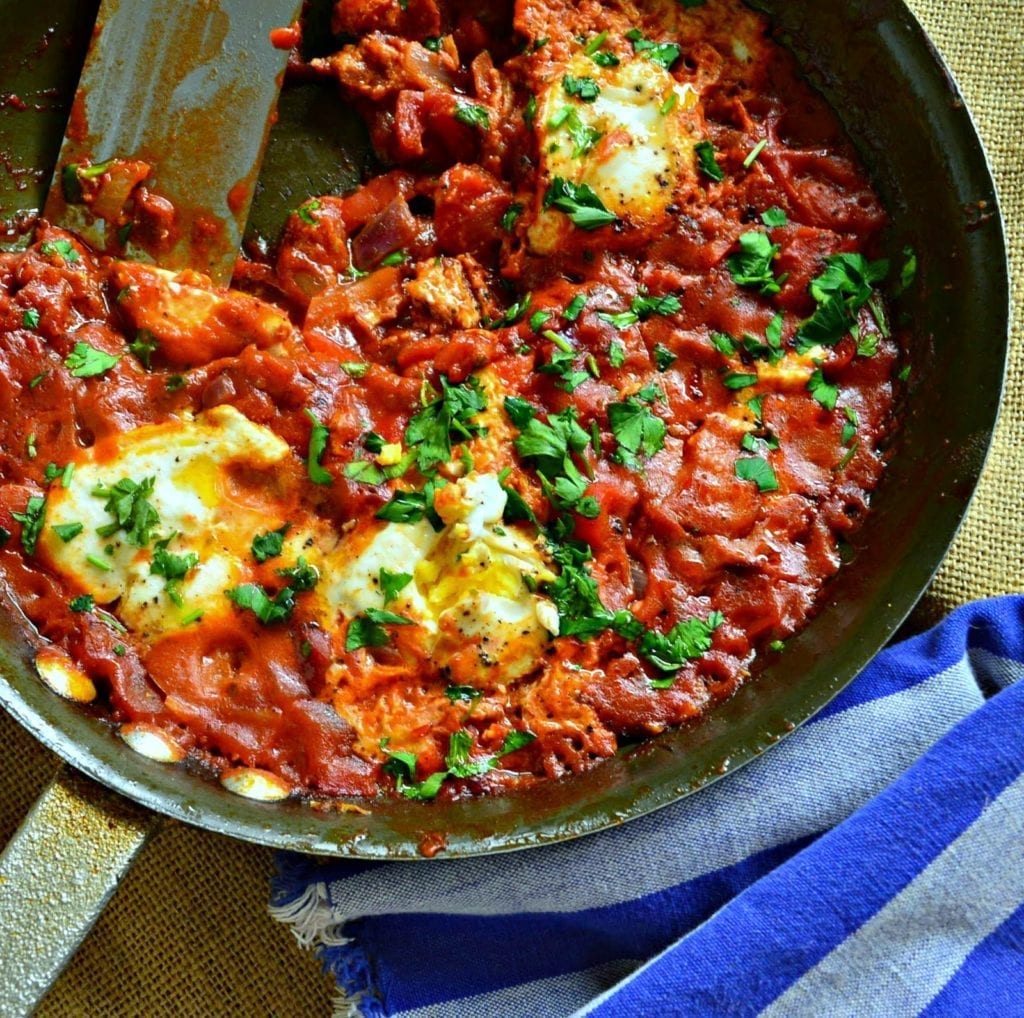 I don't know how I missed this post Abbe. Love me some shakshuka. I was introduced to it by a dear friend in London. I kind of fiddled with her recipe until I came up with a Mexican version that my family loves. I'll have to try Alex's recipe. It sounds fab.

well Shoot! I just got back from the store buying for dinner and tomorrow's breakfast. Or else I would have gotten ingredients to make this. I'll have to pin it for next weekend. My son cooks just like Alex. It's an event, with every dish dirtied, and countertops full.

That looks wonderful! I haven't made shakshuka as such but we have an Indian version my mum used to make and I make that on occasion. There is something about tomato sauce and eggs, mmmm. I missed seeing you today! xx

I have never heard of shakshuka...but had similar dish before...looks delicious Abbe...I want mine with the egg yolk running...Thanks for the recipe, hope you are enjoying your week :D