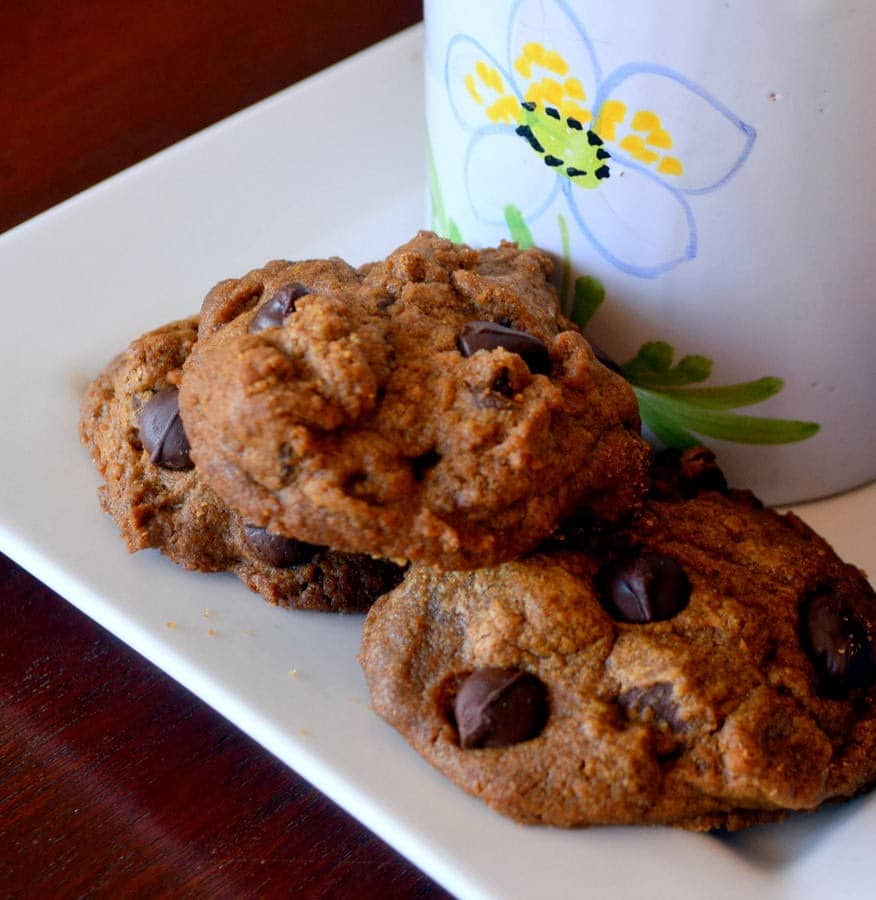 The evening began with the pass off of fudge brownies filled with cookie dough and a bunch of coffee mocha cookies. (I keep my cookies in a giant zip lock bag so they stay moist. I can assure you that when the bag is opened it smells like a just brewed cup of coffee.) A Paul Prudhomme recipe produced these cookies and I have no idea what took me so long to bake them. This is an adult cookie, rich, with a dense, chewy texture, not too sweet and with the addition of chocolate, makes me almost want to call these Frappucino cookies, but I won’t.

Alex Odie San ( a term of respect in Japanese) Odenator is currently working in  Matushisa in Vail. It is a vast, modern restaurant but the sushi bar is quite small and therefore quite quaint, to sit in. Not quaint because of the decor, but because of the close, warm feeling you get from sitting there. The three of us were seated and then the show began. It was a show that deserved about ten standing ovations and I hope to give them at least two every time I go back. 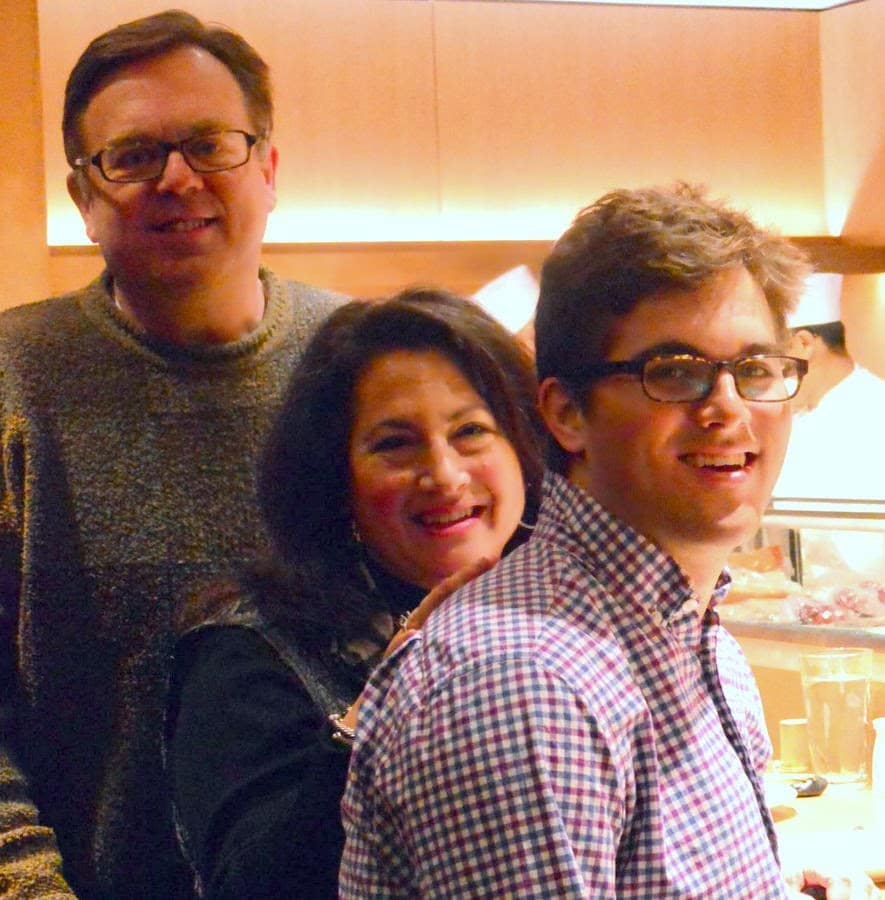 Matsuhisa is a well known Japanese restaurant that combines Peruvian and Argentinian elements into its truly unique cuisine. It also adds a bit of kokoro or heart that can be felt in every dish. Nobu is a classically trained sushi chef who has had enormous influence around the world. Trust me, this man does food like no other. Nobu Matsuhisa has many restaurants around the world that bear the name of either Nobu or Matsuhisa and for the first time, I was able to try fresh wasabi and fresh hearts of palm.

I was able to watch the sushi chefs prepare sushi “new style” which is when they sear the sushi with a torch for a brief few seconds before serving. The results are outstanding.

My mother is a big fan of Nobu. She has enjoyed his food in New York and Las Vegas and on a ship cruising around South America. After reading this I know she will wish that she was with us at the sushi bar. The funny thing is that when I was 14 or so I remember my younger brother choosing for his birthday to eat at a Japanese restaurant in Chicago.(This was when there weren’t Tokyo Joe’s on every corner, no one had even heard of sushi and probably not tempura or teriyaki either! I’m not sure why he chose Japanese other than maybe he was enamored with the Japanese exchange student that stayed with us one summer. One night the students had a get together and put on their kimonos and we were all awed with the gorgeous sight.) In any case, we were seated behind rice paper doors in our own private room. Truth be told I remember walking out of there after what I’m sure was an expensive meal and the first words, as I recall, out of my father’s mouth were something like,”I’m still hungry. Who wants ice cream?”

It took a long time for me to want Japanese food again. Many years later a girlfriend dragged me to lunch and proceeded to teach me the art of eating sushi. From then on I was hooked. And luckily in Denver we have a few really good Japanese places. But not like Matsuhisa; Matsuhisa with a touch of Peruvian spices thrown here and there.

I finally was able to taste Nobu’s signature broiled black cod with miso, but in my humble opinion, it is the sea bass with black bean sauce that I fell in love with.

But then I also fell in love with the scallops with jalapeno relish served over Brussels sprouts. I mean look at these. Love at first sight, right?

There were so many dishes dished out that it is hard to remember them individually. The sake was breathtakingly served in a bamboo pitcher that held the chill. We drank cold sake and ate warm shishito peppers sprinkled with Maldon salt flakes that were a perfect way to begin the evening. And what an evening it was. Later I moved from sake to the gardeners cocktail which combines chili and ginger and lime and cilantro with Hendrick’s gin which I will recreate. The quartet of sashimi plates placed before us were not only gorgeous, but enlightening  to all of my senses. In fact, those were bites I will not soon forget. The sable, the salmon, the mackerel, OMG, the fresh shrimp, were incredible. 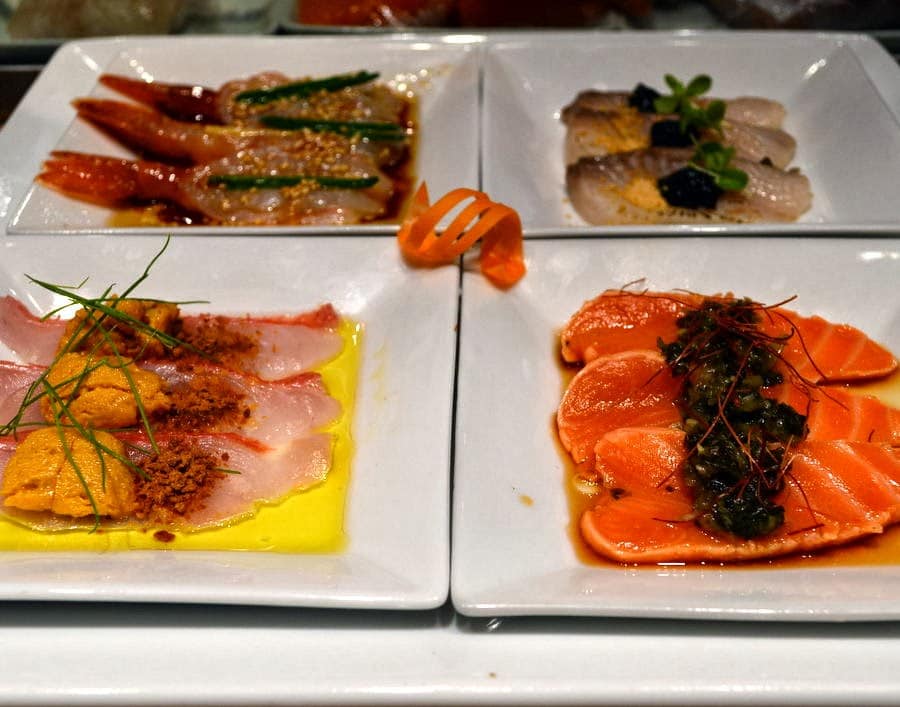 and the tuna miso chips were delectable but Nobu’s cuisine shines in his ability to combine ingredients in a creative way.

The only thing I didn’t partake of, but the boys did, was the oyster shooters with quail eggs. They must have had ten different ingredients in them but I wanted to be sure my appetite held! We were served rock shrimp tempura and King crab tempura and each bite was luscious and savory and sweet and well, there is a reason these dishes are popular.

I even had a slice of the steak seared on a salt block, but not being a beef eater anymore, I let the men finish this one. They were not disappointed.

We loved the live octopus and the maguro and the way our sushi san took care of us. He would have kept preparing for us all night but we just couldn’t take it anymore. At least until dessert was put in front of us. Dessert? You didn’t think they’d let us go without dessert, did you?

Yogurt hibiscus flavored panna cotta with tiny lemon macarons, oh man, partnered with adzuki bean cakes topped with pineapple salsa, bordeaux cherries and whiskey sauce sent us out into the chill of the evening with the need to walk around Vail at least ten times to work it all off. We were champs, we did it in. And then we were done in, but in a good way. 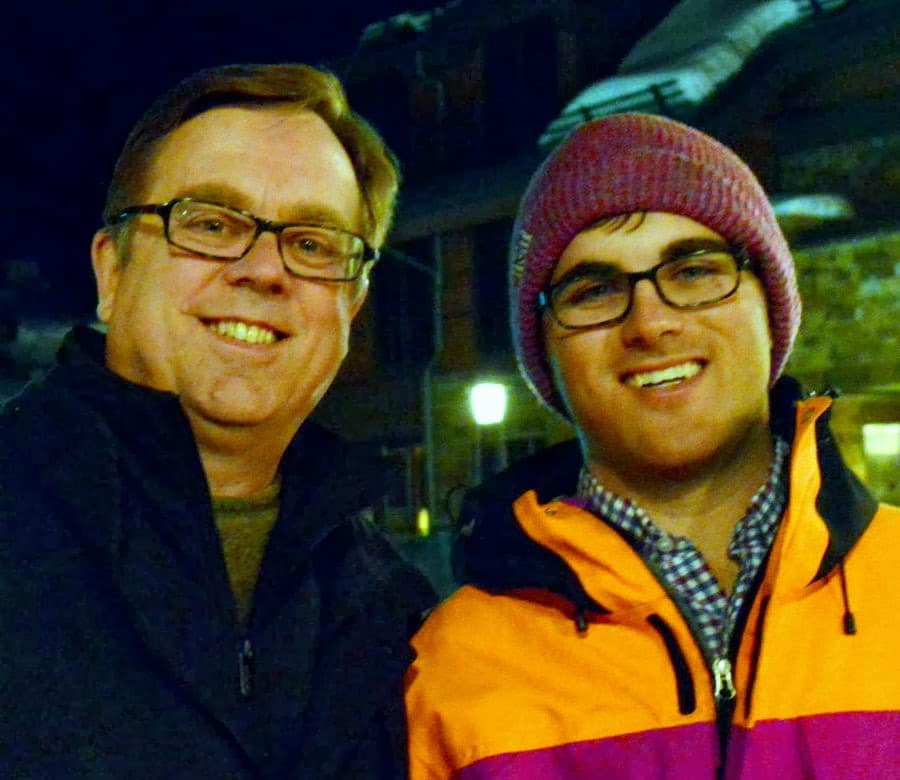 But of course that was when we got the text about some cute little dog barking from some
idiot landlord.

One thing I enjoyed most about the menu was that it gave a simplistic description of each menu item. In other words, surprises await, when you are served. And I love surprises! Be assured though that nothing about this menu is simple. Being able to watch the dedication and perfection of the sushi chefs made it quite clear that nothing was simple, though it was made to appear that way. Walking through the kitchen after dinner was another fun experience. However the walk didn’t take long. This was a tiny kitchen that amazingly has turned out up to 550 dinners during high season when the restaurant holds about 150!

We easily lost track of all the delicacies placed before us. What we didn’t lose track of was the ease with which we were served. I would have happily given each server a hug and more cookies and sent their mothers a note telling them how great they are. Just like they kept telling me how great Alex Odie San Odenator was. And the sous chef-the incredibly young sous chef who graduated from the CIA-yes he was remarkable. And sweet and sooo unassuming. I’m sure he was in charge of the kokoro that  was served with each dish. The loving attention sent our way. The reason the evening will stay in my heart. 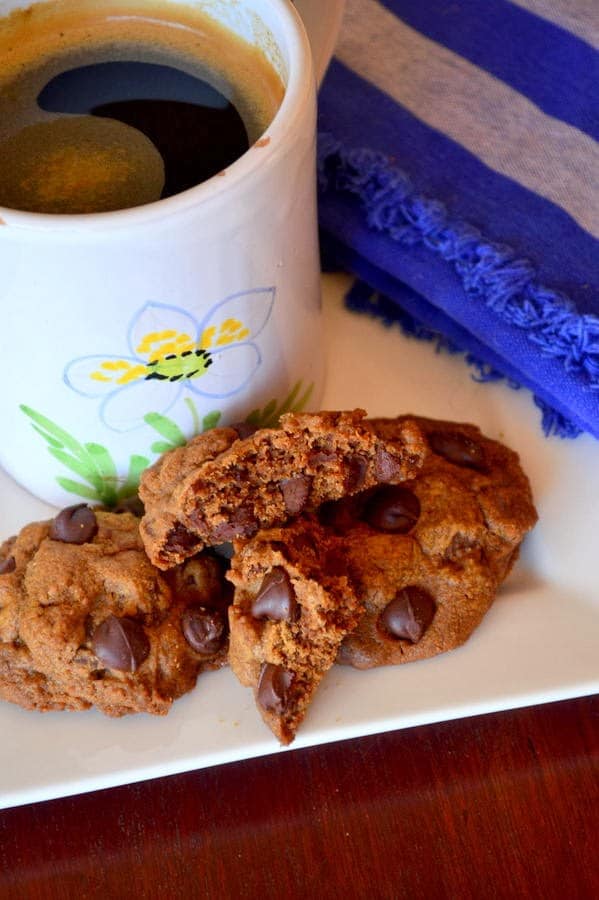 Cream the butter in an electric mixer on high speed, about one minute. Add sugars and beat on high speed until thoroughly blended, about 1 minute. Set aside.

In a large mixing cup, mix the coffee, vanilla and egg yolks until the coffee is dissolved. Add to butter mixture and beat on high speed until well blended and an even color, scraping the bowl as needed. Add flour and mix about 1-2 minutes until flour is incorporated. Stir in the chips.

Drop large teaspoonfuls of batter onto a greased or parchment or Silpat lined cookie sheet and bake at 350 until cookies are very lightly browned on the edges, about 16 minutes. Cool until cookies start to harden, about 3-5 minutes, then remove and finish cooling on a wire rack. Store in an airtight container or a giant Zip Lock bag. The longer these cookies sit, the more intense the coffee flavor becomes. 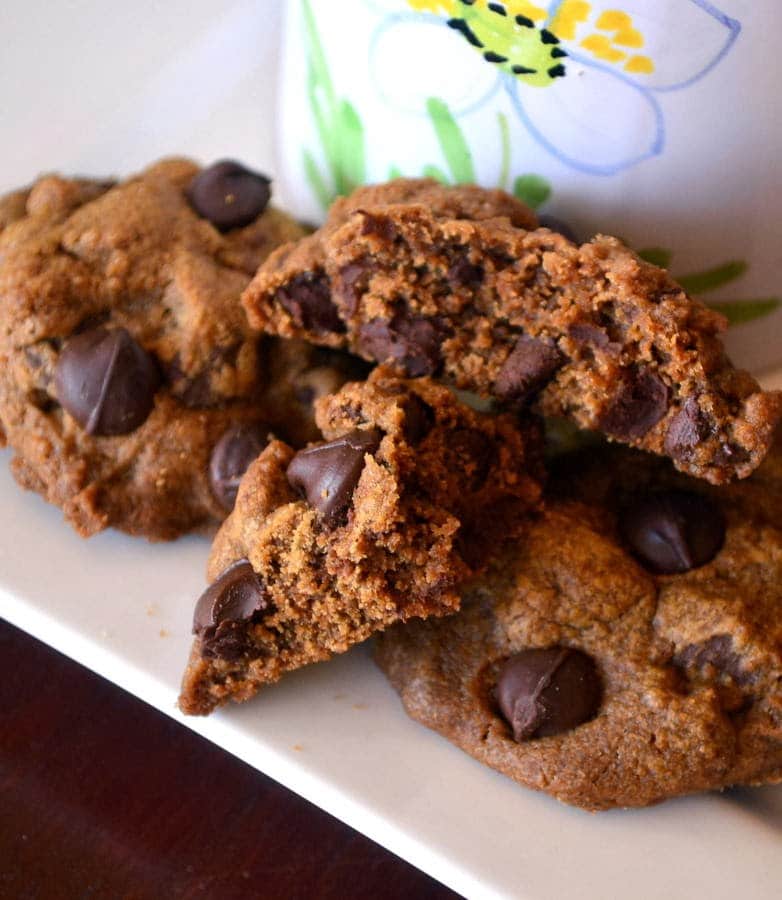 These cookies are definitely for me and my family Believe me - they won't last long..... :)

What a fantastic meal!! I've been to Nobu in NYC and I am sure the caliber of Matsuhisa is up there!! On the other hand, the cookies look even better. Perferct dessert following a nice meal. Thanks for sharing!

I don't know what I like better your cookie recipe or this luxurious dinner. However, life's short eat dessert first so I will go with that motto.