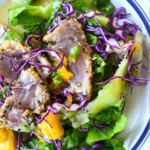 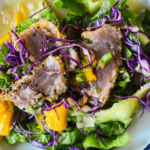 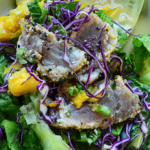 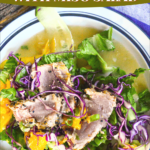 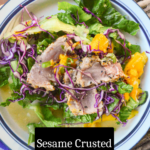 How Many Sesame Tuna Steak Recipes are out there? Probably a lot. My simple method is easy and this post includes 5 ways to eat sesame tuna steak! 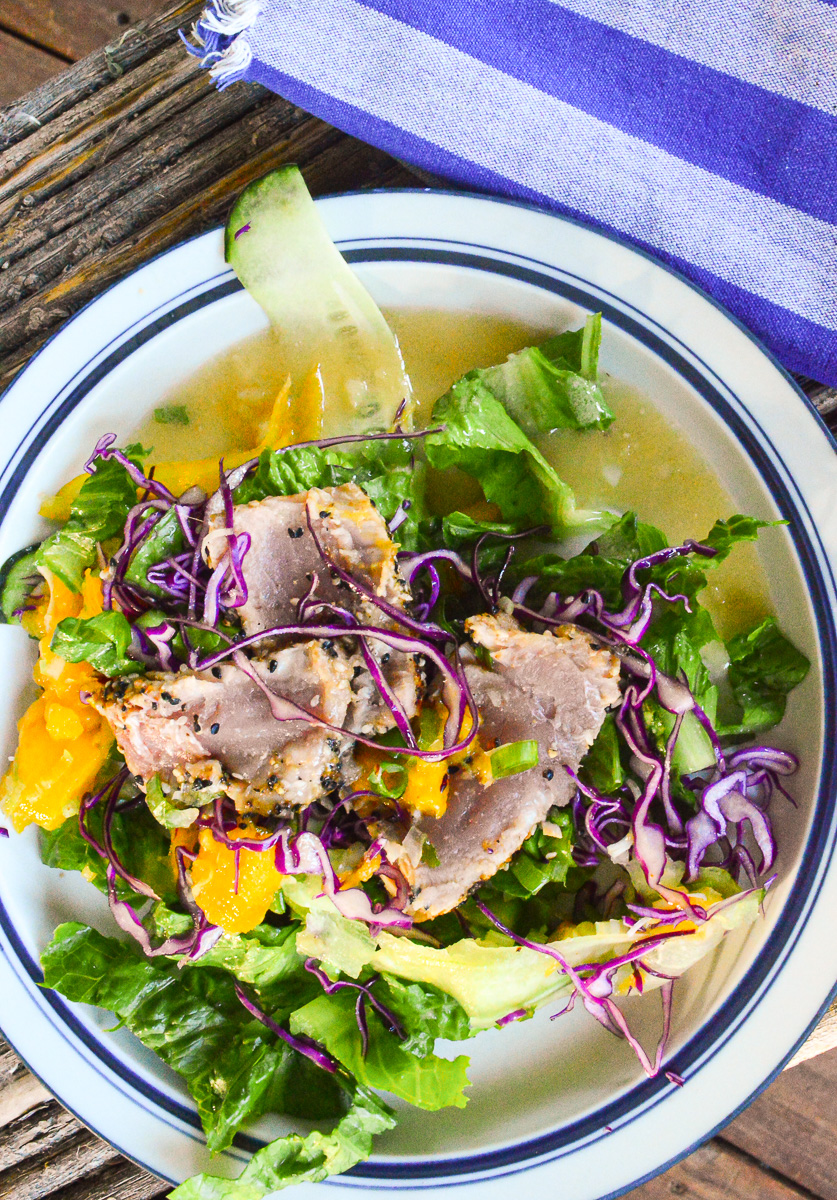 Who doesn’t like a good steak? Well, a lot of folks and I’m one of them.

I was raised on a lot of beef (my grandfather and uncle were both butchers), but for the last 7 years I haven’t eaten moo moos.

No need to go into details, but other than missing burgers, I don’t really miss meat.

I do admit to missing the smell of a good roast in the oven though, especially on the coldest days of winter.

Honestly, one can find a reason to not eat or eat most anything, so I am not one to judge. And I don’t.

I admit to making steaks or burgers for my family, but I choose something else.

Now you know why you don’t see a lot of meat recipes on this blog.

One thing that Manservant loves is tuna. And tuna, I can buy in steak form so that’s close, right?

He loves ahi tuna and as long as it is sustainably caught, I have no problem keeping him satisfied.

He loves seared, rare tuna; much like he does his steak. No problem there.

There are many sesame tuna steak recipes, but this is the one I like. 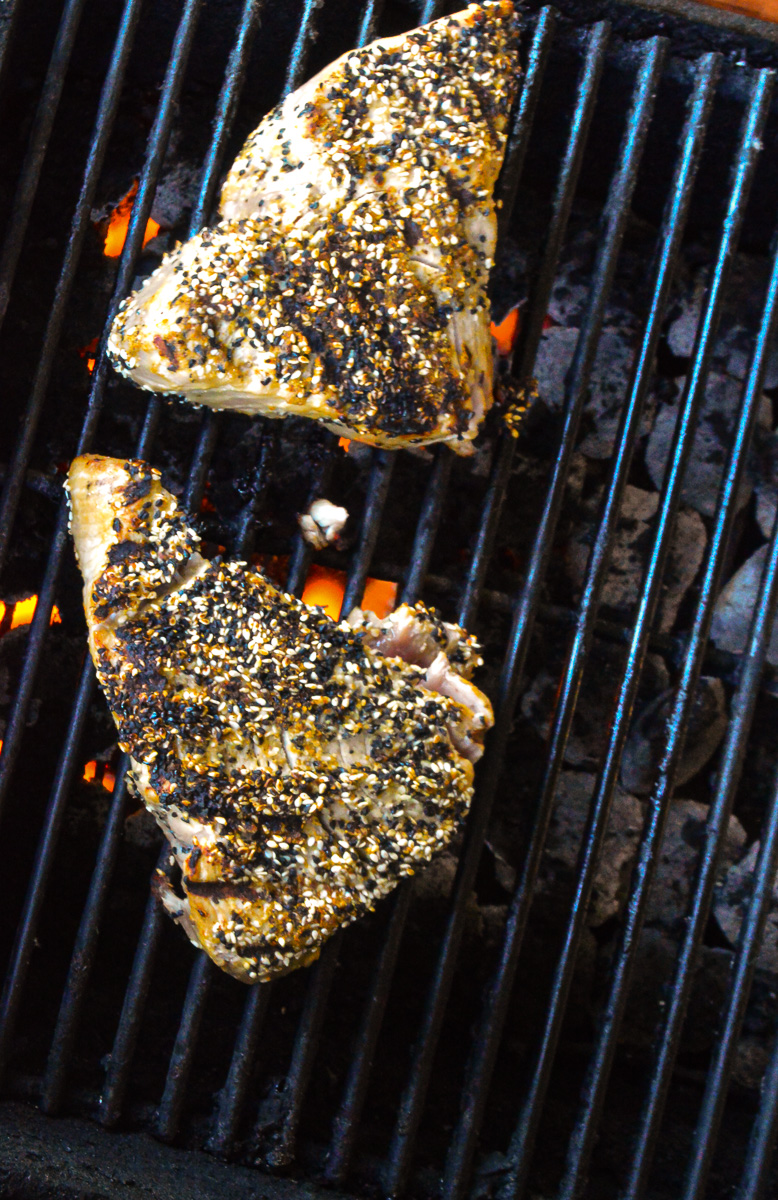 This is such an easy dish to make and the only thing that keeps me from making this more often is the price.

It is good to know that tuna has no waste.

No bones, no fat, just plain tuna and it is lean and good for you.

Well, I’m not one to plan ahead and often don’t decide what’s for dinner until I reach the grocery.

And thank goodness for a well stocked freezer, for the times when I don’t reach the grocery store

You would think that blogging might help me plan ahead, but it doesn’t and this is how I cook.

Really. I am very good at making something from nothing.

But last week I did find myself at the grocer and found some beautiful Ahi tuna steaks.

And nothing is simpler than seared tuna on my gas grill. Of course a charcoal grill also works but I’m too impatient to wait for the coals to heat up.

And yes you can sear the tuna steaks in a hot pan with just a tablespoon of olive oil over medium-high heat.

Placed atop a salad one these crusted tuna steaks is a perfect, nutritious meal. Not to mention tasty. 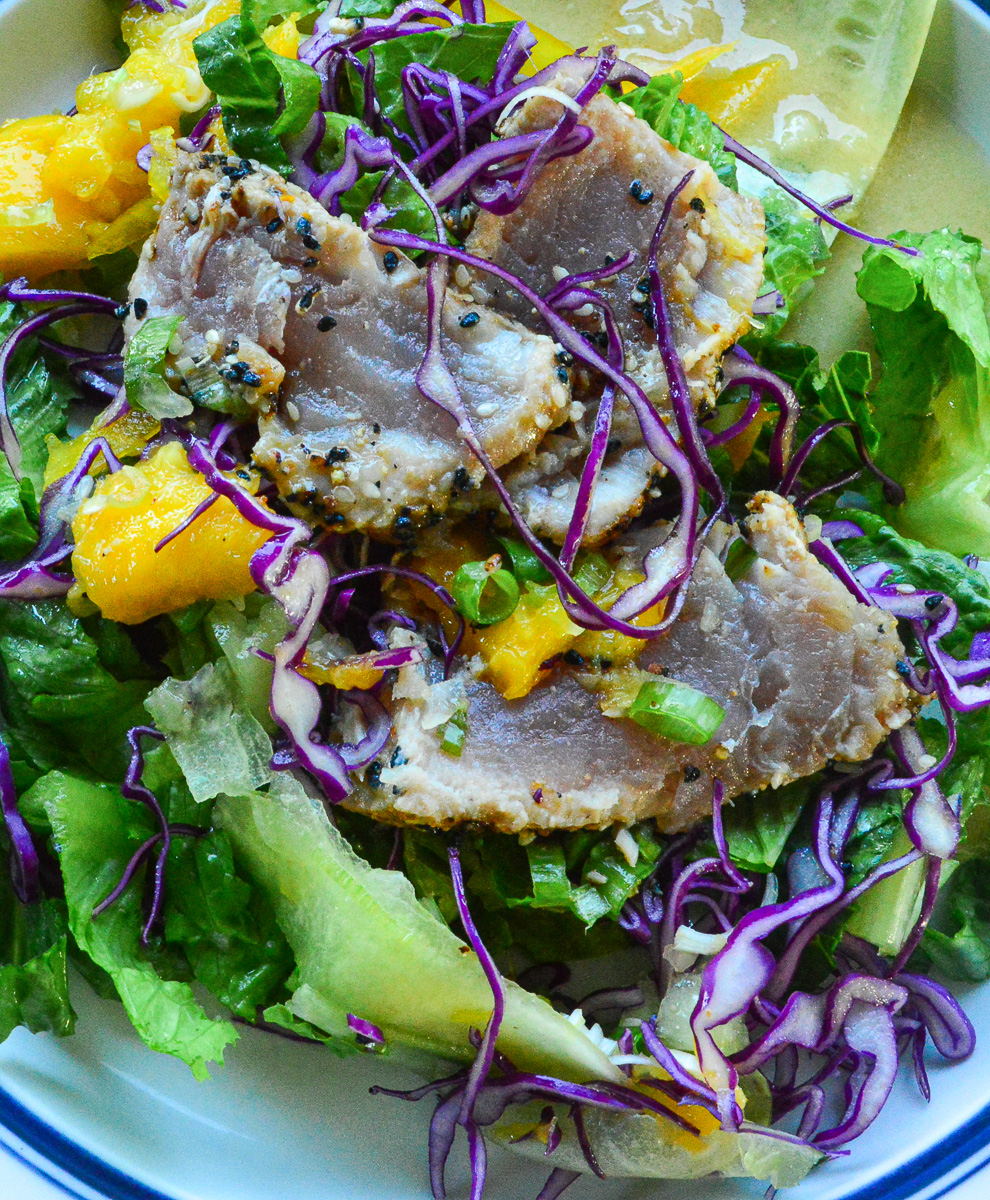 This tuna recipe begins by marinating the fresh fish with just three ingredients.

Be sure to cover all sides of the steak along with the top and bottom.

I served this perfect weeknight meal over salad but if you prefer white rice that works, too!

These sesame crusted tuna steaks with a sesame seed crust are one of Manservant’s favorite restaurant meals.

Honestly though, they are so simple to prepare at home.

The quality of the fish is important so be sure to buy your fresh tuna steaks from a reputable fish store.

The tuna is cooked in mere minutes-at least if you like it rare- so when cooked, place it on a cutting board and let it rest a minute before slicing.

Seared Ahi tuna can be sliced into thin slices or thick slices. If it is cooked until it flakes, it will not be easy to slice.

Do what you prefer as it is personal preference as to how you like your fish cooked.

Just be sure to know that the more this tuna cooks, the dryer it will be.

If you choose to serve this with rice the miso dressing makes a great dipping sauce.

And if serving without greens be sure to sprinkle with green onions for extra flavor and also they make everything prettier! 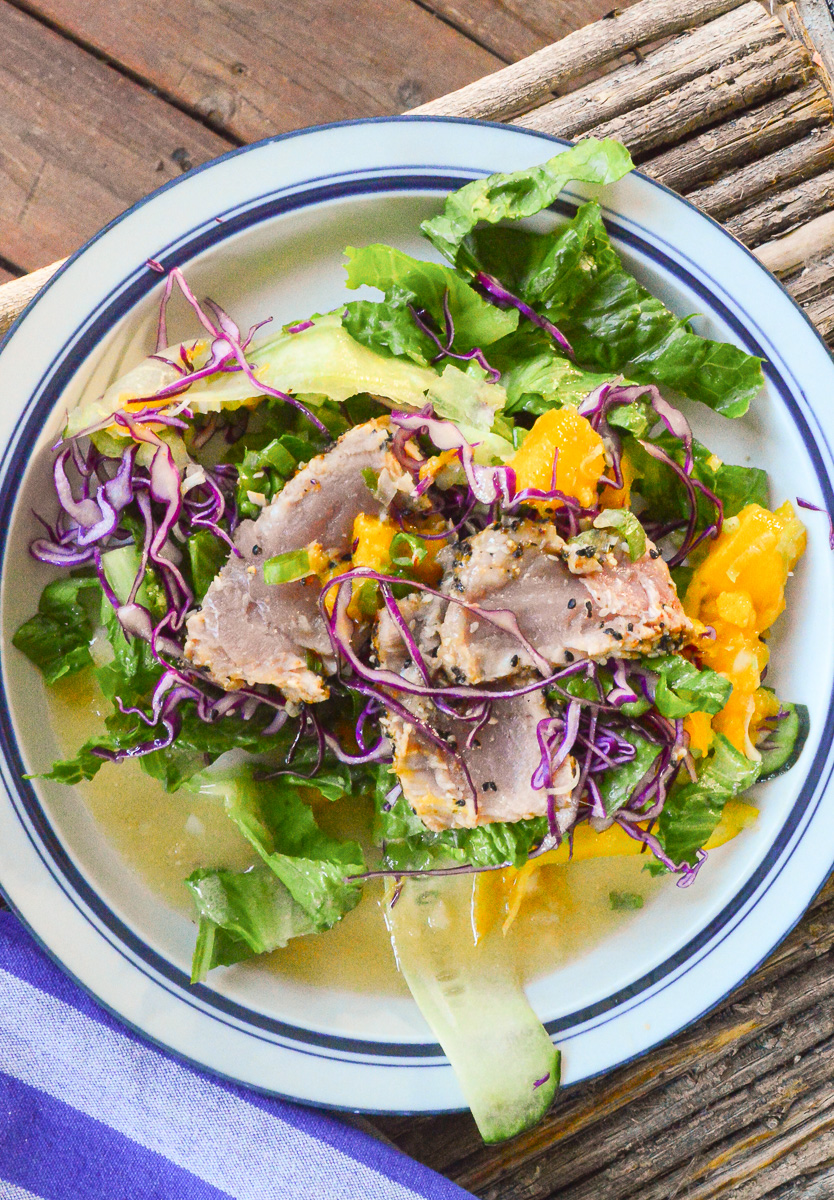 What to do with Sesame Tuna Steak?

There are many versions of sesame tuna steak recipes, but this one means you can have grilled sliced sesame tuna on rice or a salad.

Manservant loves his tuna steak on a bun. That’s five.

Honestly, I could keep going but this sesame seed peppered tuna can be used in many recipes!

Do you need soy sauce?

If you don’t have miso, then soy sauce will work.

Keep in mind though that miso, which is a fermented paste made from soybeans and fermented rice, has the consistency of peanut butter and is richer and slightly sweeter than soy sauce.

It comes in different colors or depths of flavor and is found in the refrigerator section of the grocery.

The good news is it lasts forever and can be used in soup or salad dressing, or added to sauces such as bbq sauce.

Mix it into mayo to add some extra punch to your favorite sandwich and don’t be afraid to make tuna salad with leftovers of this tuna.

If doing this I  like to put the rare tuna into the microwave for about 30 seconds to cook  a bit longer so it is a bit flaky to make the tuna salad with.

Since this isn’t an ad for tuna, I best get to the recipe.

My brain is a bit tired due to the fact that Spirit arrived 4 hours late with Manservant and son.

Which means that I did not arrive home from the airport pickup until about 12:30AM, which makes one a bit tired. Well, it does me. OK. Let’s eat!

Note: If you want a guide to sustainably caught fish from Monterey Bay Aquarium, click here. 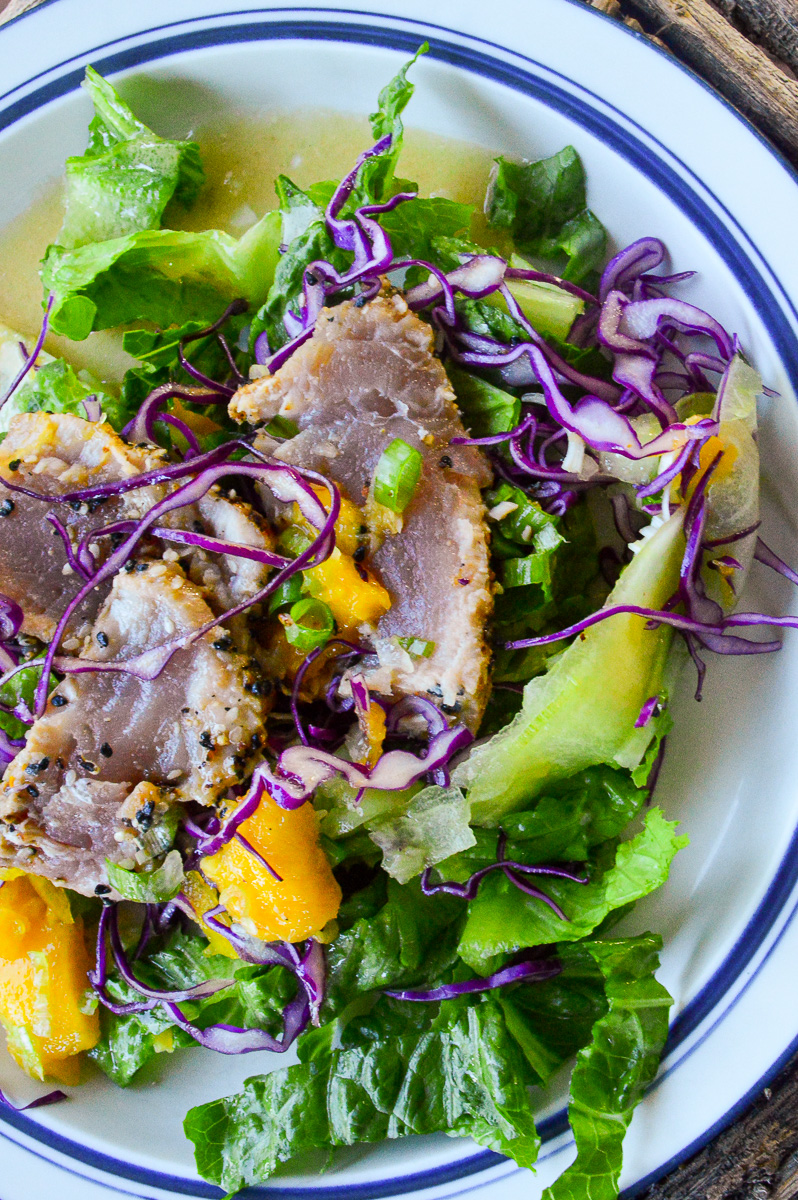 This simple summery meal is not only healthy, it is totally delish. Feel free to use the marinade on chicken and the dressing on any salad. It is also great when making a rice salad!

Place fish in a dish and marinate while getting rest of recipe together.

Make sure both sides are covered in marinade. Keep fish at room temperature.

Mix seeds and peppers together. You will cover both sides and edges of the tuna steaks with this when you are ready to grill.

Prepare salad ingredients so they are ready to be combined when needed.

Prepare dressing by whisking all ingredients together.

Oil the grill grate before placing fish on it so it won’t stick.

Dredge tuna on both sides in pepper mixture. Cook on high heat no more than two minutes per side. You may want only 1 1/2 minutes per side, however if you do not like rare tuna then cook a bit longer. Let rest a few minutes before slicing thinly on the diagonal, or you may end up with flakes of fish and not slices!

Toss salad and dressing together. You may not want to use all the dressing. Or serve dressing on the side.

Place slices of tuna on each portion. Enjoy!

Finding a nice tuna steak is a challenge here, but my husband always checks when he goes by the fish department. I would love to make this salad, so have saved it just in case. Perfect for the summer.

Sesame encrusted tuna steaks are so good- love it the salad with the miso. Hard to come by a good sashimi grade tuna these days but do love it when you can find it.

Nice recipe Abbe - I love a good rare tuna steak myself. I have miso in the fridge so that's a start! Hope you got some rest over the weekend :)

You are good to go, Tricia! No, I didn't get rest and I was quite bummed. We need a trip, you and me. By the beach... Resting!

Great combination of flavors! And, you cooked it to perfection, rare, just the way I like it.

I am a beef eater, but not often. But beef eater or not this recipe is enticing for everyone. The photo really captures the essence of the flavor. Creative recipe for fish. I like it.

Thanks, Carol! This is a beefy recipe for fish lovers. Dos that make sense?