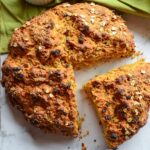 This classic Irish soda bread with raisins is hearty and tender, slightly sweet and perfect with corn beef or Irish stew. For that matter I love it slathered with butter, too! 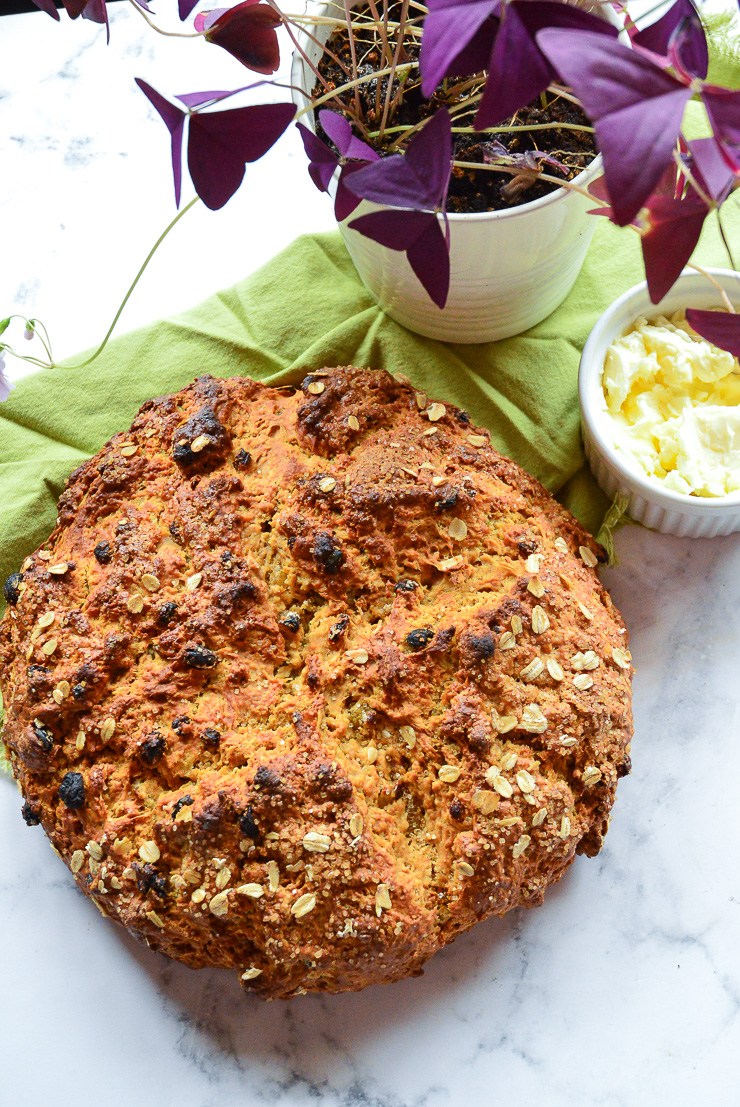 With St. Patrick’s Day approaching, I found myself scouring the bread aisles at my local Kroger’s in search of Irish soda bread with raisins.

I’ve written about this bread before and I love using it for Irish Grilled Cheese. (Not traditional but this grilled cheese sandwich is amazing!)

Guess what though? I think they have changed the recipe and alas, it is still good, but not like I’ve remembered.

So it’s time to finally find a new recipe for this easy quick bread.

Unlike the supermarket version that is a yeast bread recipe, this sweet irish soda bread recipe rises from the interaction of the leavening agent baking soda, and the buttermilk.

A dense, hearty bread; this bread goes well with your favorite corn beef recipe or your shepherd’s pie.

Believe it or not, it is now thought that Native Americans were the first to begin making soda bread.

Pearl ash which is a natural form of soda found in the ashes of wood, was combined probably with sour milk, to create a soda bread. 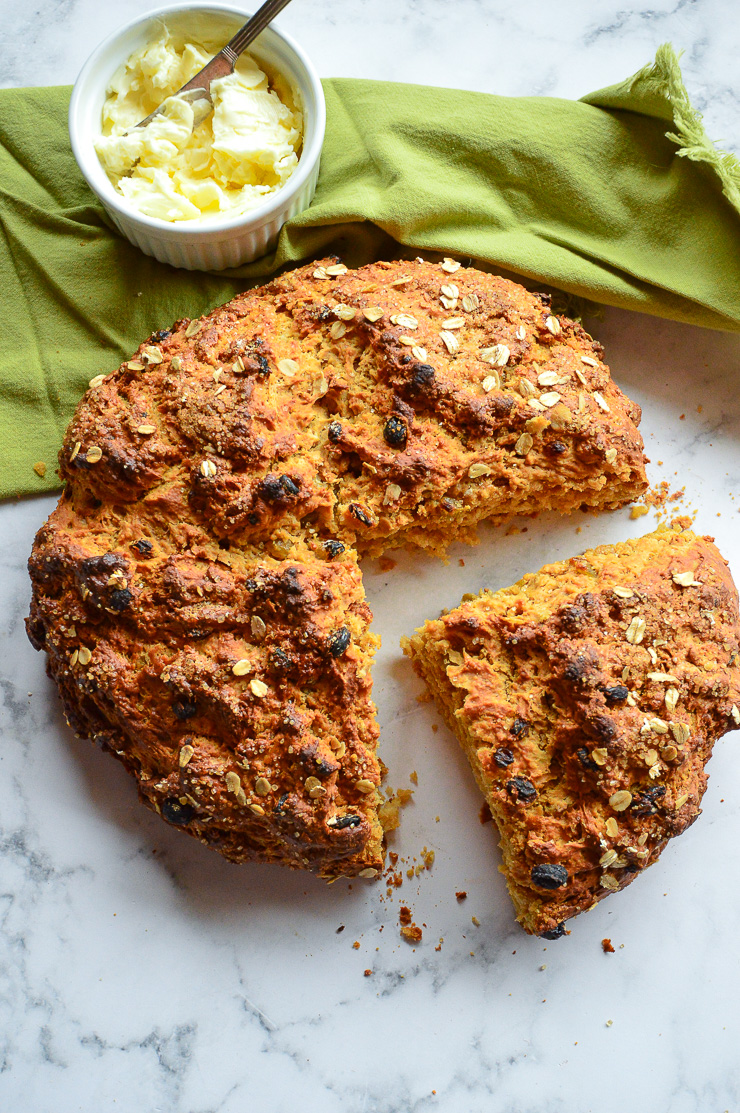 How the Irish discovered this is a bit unclear to me but in the late 1830’s baking soda was introduced to Ireland.

With the famine going on and yeast being out of reach for many, this simple bread became a staple in Irish homes.

It was also easily baked in a pot over the fire as most homes did not have ovens.

As the Irish became more prosperous, the addition of butter and eggs became more common in this easy soda bread recipe.

Parts of Ireland did incorporate seeds into their bread and it is thought that is how caraway seeds became part of Irish soda bread.

Personally, I am not a caraway lover so I leave them out.

There are so many versions of Irish soda bread and this one is the only one I’ve found that contains molasses.

I’m guessing that in Ireland treacle was most likely used to add some sweetness, but in the States treacle is harder to find.

As one who prefers a slight sweetness in bread, (well, in most anything), I loved the addition of molasses. 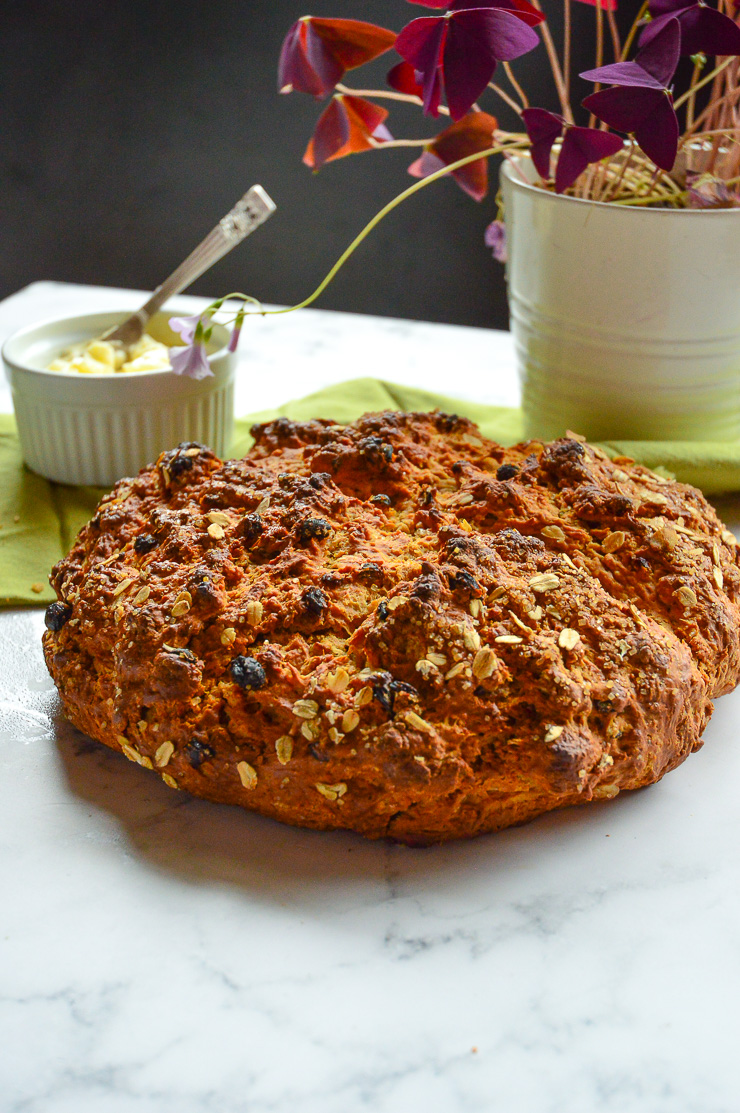 The golden raisins also add great flavor and keep in mind that the raisins can be left out and any raisin variety can be used.

For that matter any dried fruit may be incorporated, though it would be a deviation from the traditional version.

In addition to the molasses I also added some brown sugar, because I wanted more sweetness!

And though it looks like this bread might be made with whole-wheat flour it is the color it is because of the molasses.

You could sub in some whole wheat flour for the all purpose flour, but in that case it becomes Irish brown bread!

Now if you have about 15 minutes, we can start this Irish soda bread baking!

If you have a baking stone or pizza stone, this is a great way to use it. Preheat it at 425 in your oven with the rack set in the middle.

A heavy baking sheet can also be used or a cast iron skillet.

Sift the dry ingredients- flour, baking soda and salt into a large bowl.

No sifter? Just use a fork to loosen everything up.

If you choose to add the brown sugar, mix it in also. 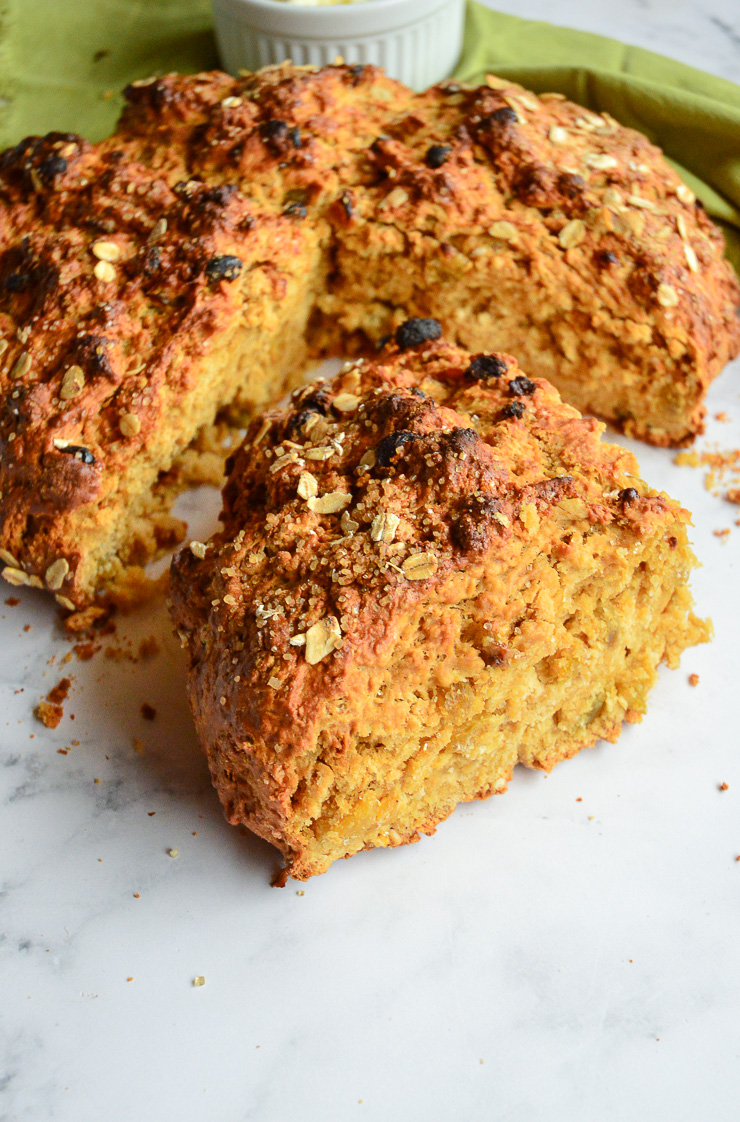 Add in the cold butter with a pastry blender or I use my grater and grate it in.

Make sure it is very cold or even frozen if you try that, otherwise the butter will melt in your hands.

Now is the time to stir in the raisins and caraway seeds if you are using them.

Make a well in the center of the dry ingredients and pour in the buttermilk, egg and molasses.

No buttermilk? No worries.

Let this sit for about 5 minutes, and then pour it in!

Mix everything up with a wooden spoon. It will be sticky.

Now with a little bit of white flour on your hands, form it into a round loaf, on a floured surface, about 8 inches across.

I find it easiest to place the dough onto parchment paper before sliding it into the hot oven.

Using a sharp knife, slash an x or a deep cross, onto the top of the dough.

Brush the top of the bread with a bit of heavy cream and sprinkle with oats and some raw sugar.

Bake until golden brown or until the bread sounds hollow when thumped.

Remove from oven and cool on a wire rack. 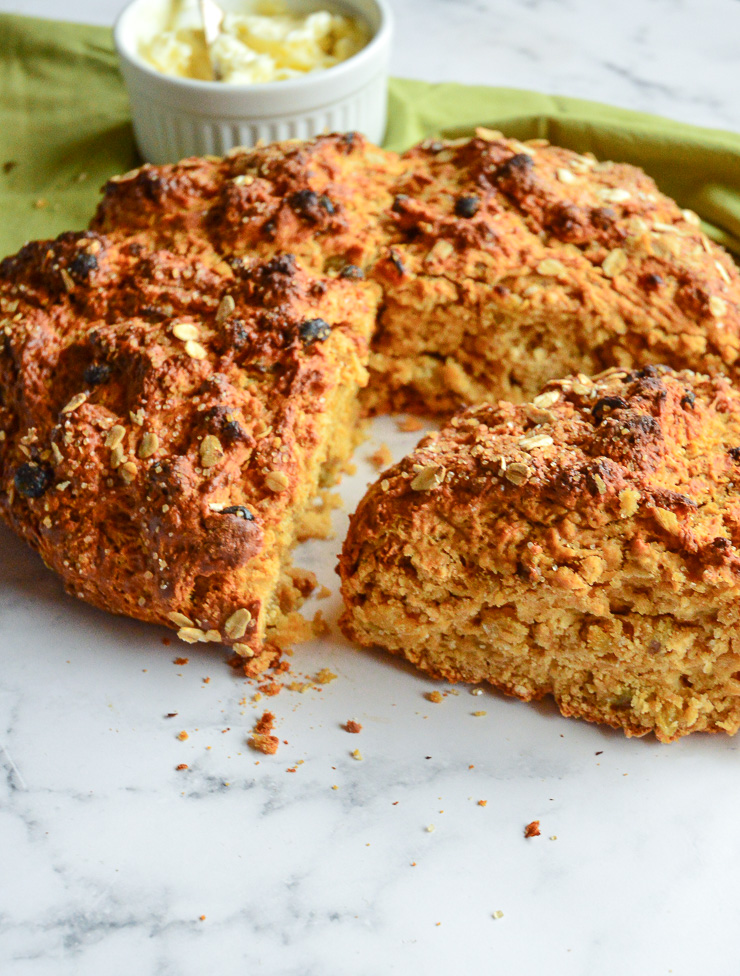 This sweet soda bread is delicious warm and can easily be torn into wedges.

It is moist and a bit crumbly and is meant to be eaten in a few days.

Make sure to use lots of soft Irish butter to spread on each slice.

In fact, I think this bread is what butter was intended for!

However it’s also super good when sliced with a serrated knife, toasted and then spread with butter and of course, lots of jam!

This isn’t the first time I’ve made an Irish soda bread, but this is the best Irish soda bread recipe I’ve come across and the one that most resembles my favorite loaf from the grocery store.

Give this easy Irish soda bread recipe a try and let me know what you think.

I love this sweet bread and have been eating it every morning with my yogurt.

But it would go just as well with a bowl of soup or Irish stew.

And from start to finish, this Irish soda bread recipe with raisins can be in your tummy in about an hour!

Not much wrong with that! 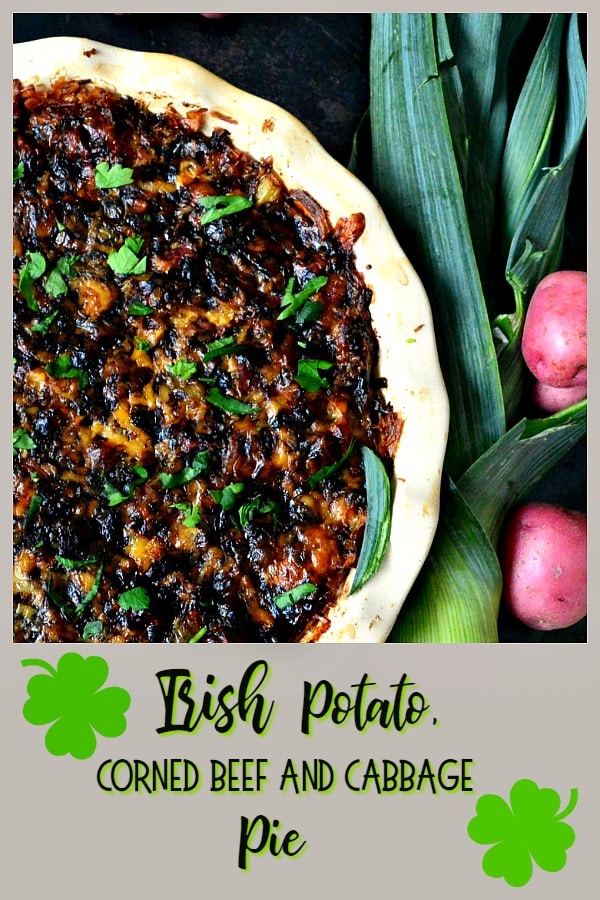 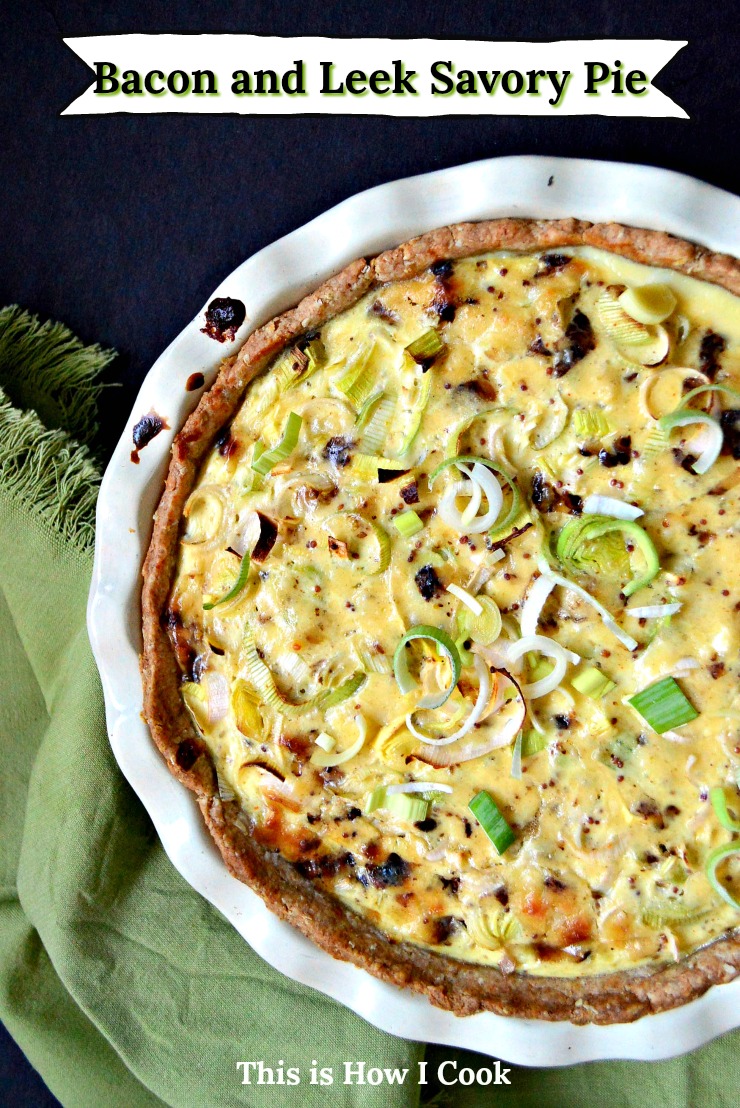 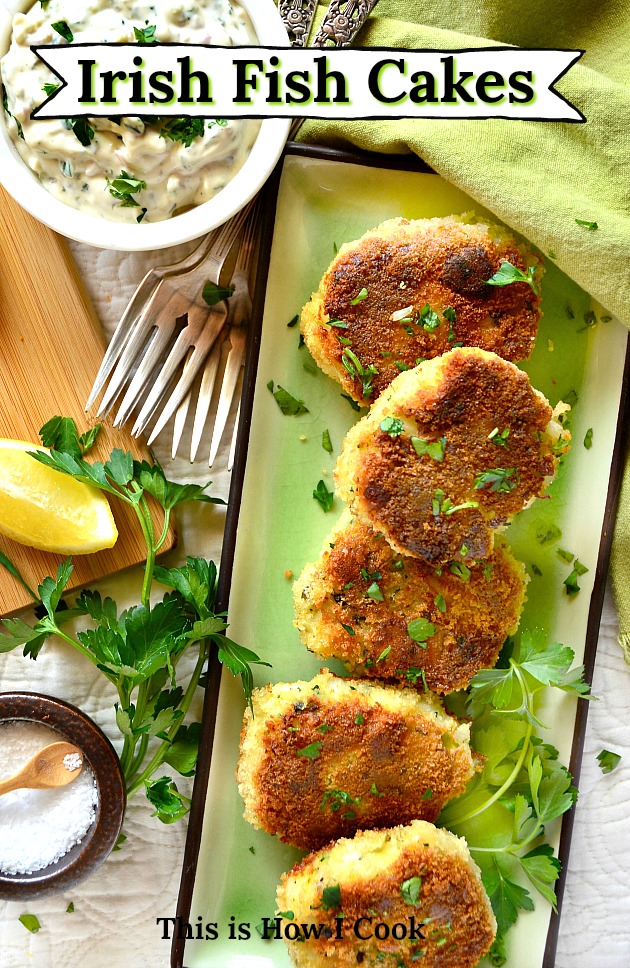 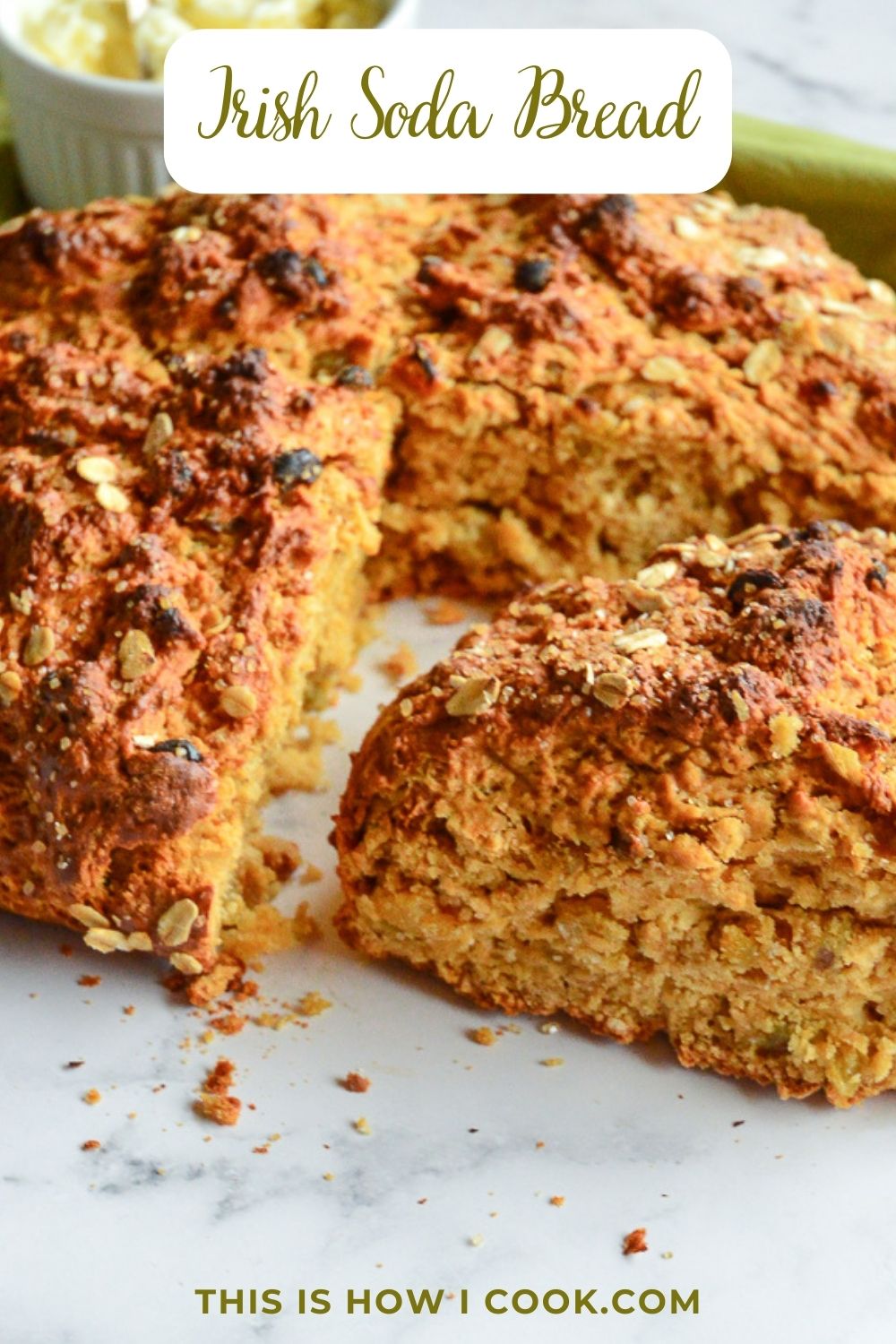 This classic Irish soda bread with raisins is hearty and tender, slightly sweet and perfect with corn beef or Irish stew. For that matter I love it slathered with butter, too!

1 c raisins (I used golden raisins) Make sure they are nice and plump.

1 T heavy cream or half and half

If you have a pizza or baking stone, use it. If not a cast iron skillet or a heavy baking sheet will work, too.

With oven rack in the middle of oven, preheat oven to 425 with your choice of cook ware inside it.

Combine flour, baking soda , salt and brown sugar (if using) in a large bowl. Stir in the raisins and caraway seeds, if using.

Form a well in the middle and pour in the buttermilk, egg and molasses. Stir with a wooden spoon until mixture comes together. Using floured hands, turn out onto a floured surface. Knead just a bit to form into an 8″ round. Place on parchment paper to transfer to oven

Before you transfer, using a sharp knife, slash a deep X across the top and then brush with heavy cream and sprinkle with oats and sugar.

Transfer to oven and bake for 35-40 minutes until golden brown and bread sounds hollow when thumped.

Serve hot or warm or at room temperature, cut into wedges or torn into chunks.

From: A Real American Breakfast

I love the idea of adding molasses for some extra sweetness plus the dark color is lovely and unexpected with soda bread. What a yummy St. Patrick's Day treat!

I used to bake Irish soda bread with the children at school. We had so much fun. I have to try your recipe.

My sister raves about Irish Soda Bread, but I've never made. I was thinking about giving it a go this weekend. Because I love molasses, especially in bread, your recipe is right up my taste buds. And after looking at the Irish Grilled Cheese, this bread is even more tempting. Thanks for sharing.

this looks good abbe. yes definitely slather it with butter when eating. :-)

Irish soda bread is always a HUGE hit in our house whenever I bake one. Yours looks GRAND, Abbe.