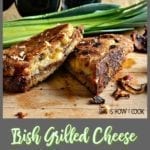 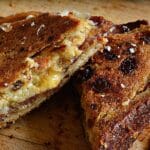 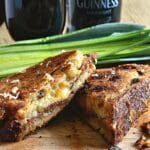 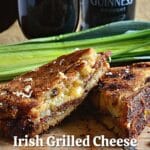 This sublime Irish grilled cheese sandwich recipe  begins with bacon that has been caramelized with Guinness, then spread with a paste of jam, Guinness and mustard. Add some Irish cheese and two slices of Irish soda bread and you have a grilled cheese masterpiece! 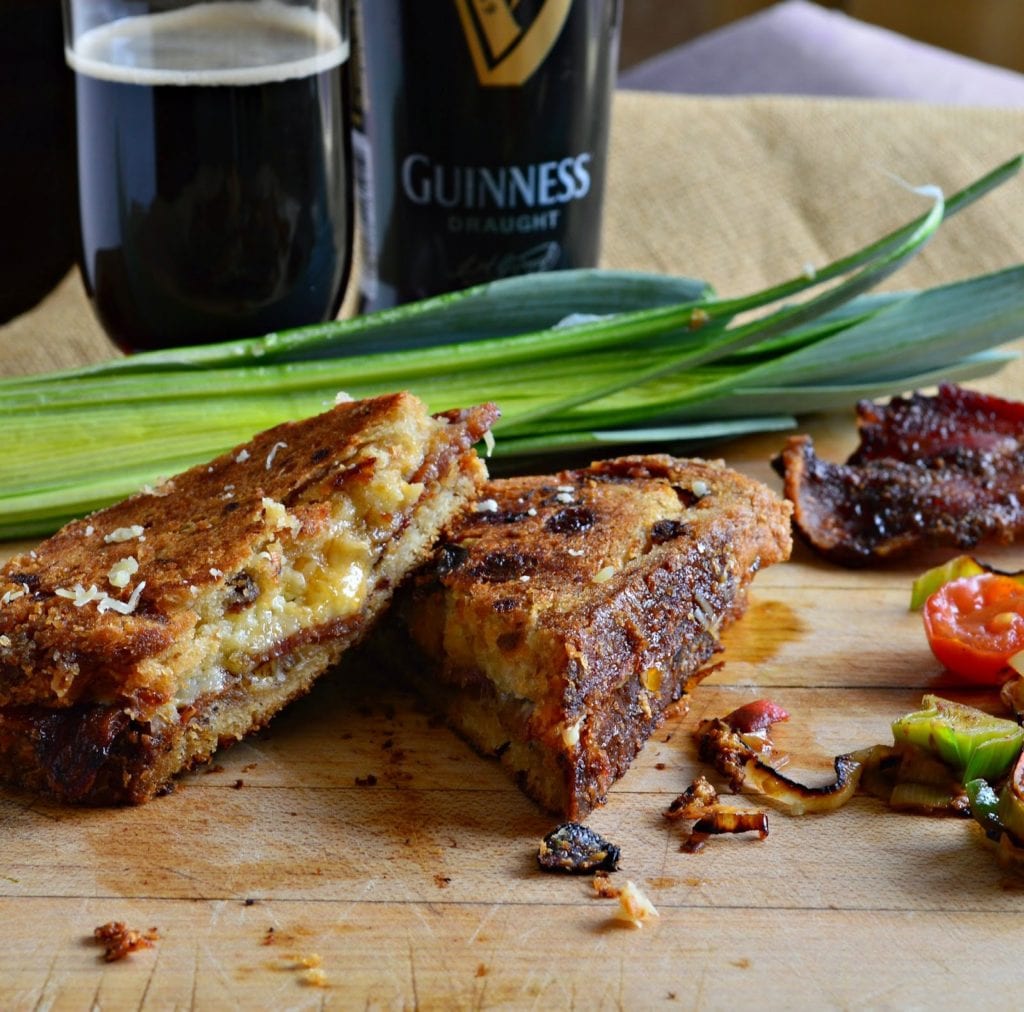 The problem with some people is that when they aren’t drunk they’re sober.–William Butler Yeats

This Irish grilled cheese sandwich recipe is perfect any time of day, but it makes a sublime breakfast sandwich and is a great way to start the day.

Or end it, for that matter. And if you’ve been swilling beer all day, this Irish grilled cheese sandwich is ideal to counteract all that liquid in your tummy!

The weird thing is  I hated toasted cheese sandwiches when I was a kid. Perhaps it was because there were only three cheeses in our home.

Mom always bought those orange plastic American slices that I never liked, however I  remember my brother peeling off the plastic and shoving them into his mouth, one slice at a time.

I remember sliced Muenster that my Dad would melt on toast for breakfast. And I remember Colby-which is a cross between Cheddar and Monterey Jack.

I never ate cheese on sandwiches. I never ate it on burgers. (Yes, I ate burgers back then.) I didn’t eat Mac n’ cheese. I didn’t even sprinkle the cheese from THE can on my spaghetti. 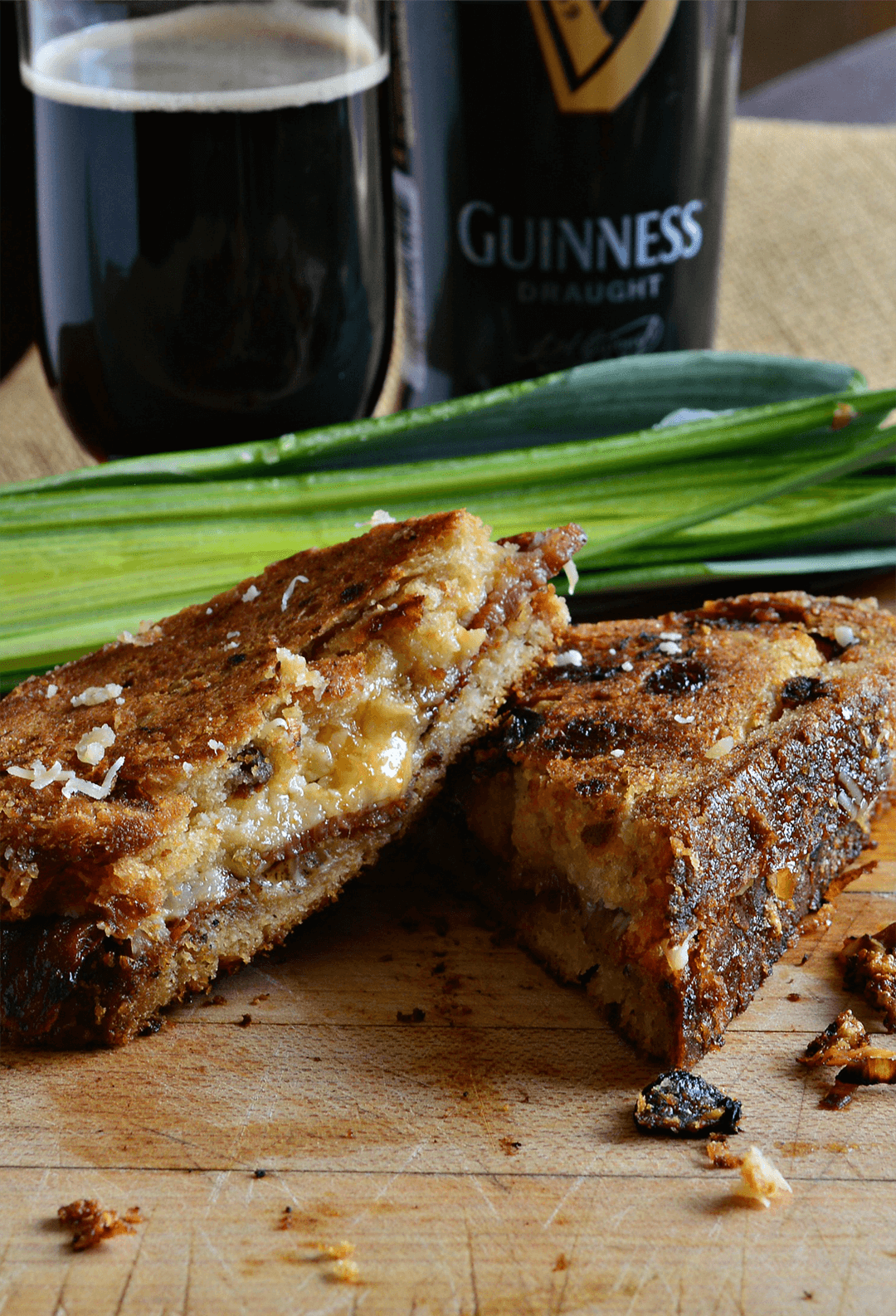 It was just last year that I bought my first loaf. I’d never eaten Irish Soda Bread before that. I then went home and made a loaf from a James Beard recipe and I couldn’t believe it, but I loved the store version more.

I admit to not liking that I couldn’t pronounce half the ingredients, but really people, this is good bread. Maybe it isn’t really Irish soda bread, but it tastes as Irish as any soda bread I’ll ever eat. 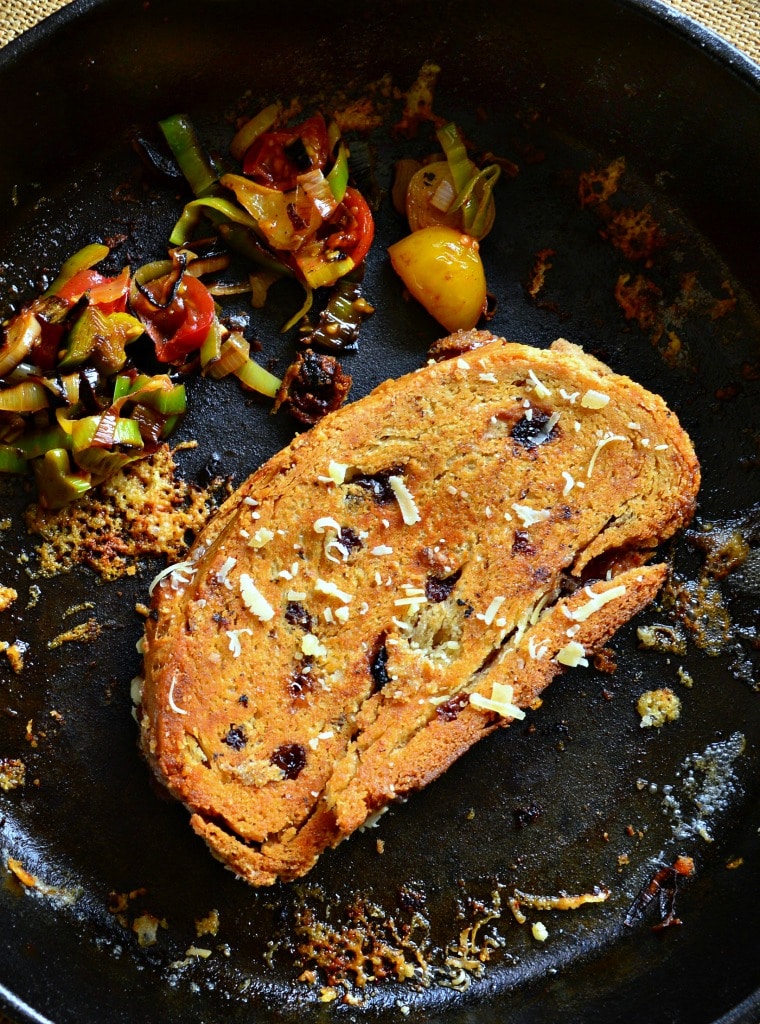 So the bread. Damn, the bread. The next time I go to the store I am going to buy like 5 loaves and freeze it, because I’ve only found it in March! It is dense. It is slightly sweet, And it has raisins in it. Oh. I almost forgot. It has Demerara sugar sprinkled on the outside of the loaf.

This is a very good thing and I’ll tell you why. When you make the best Irish grilled cheese sandwich ever (Hence the name!) the sugar on the outside starts to melt a bit. It starts to even burn a little bit. And it gets all caramelly on the outside. And the aroma? So enticing. And well, I’ll let you guess how good that tastes.

But I kind of veered off track and forgot to tell you about the cheese. It is so easy to do when drinking Guinness in the middle of the day. I think one good reason to make this grilled cheese sandwich recipe is because it lets you start your day off with beer. (Well, I didn’t want to waste it!)

But back to cheese…Being close to St. Patrick’s Day, the store was featuring Irish cheese. I love cheese and honestly, I’ve not eaten a lot of Irish cheese.

Well, I came home with three kinds. An Irish whiskey cheese that was mellow and rich. Probably tastes a lot like you’d feel after tipping a few.

I came home with a Dubliner stout, which was very fragrant with the aroma of stout. Probably like you’d smell after tipping a few; stouts, that is! And last but not least, I arrived home with a simple sweet Irish cheddar, which is probably what you’d be like after not tipping any! (But that’s not fun!)

So no, this isn’t a post about corned beef. Or potatoes. Though there’s nothing wrong with either.

This is a post about Irish cheese. And good soda bread. And bacon. I did vaguely mention that, didn’t I? Glazed baked crispy bacon with Guinness and pepper that magically becomes spicy and sweet. Well, since my original thought was to make this an Irish breakfast sandwich, I thought bacon would work. Now Irish bacon doesn’t get good and crisp, which is the only way I like my bacon by the way, but you decide; how you like your bacon, that is..

So just make this Irish grilled cheese sandwich with bacon. It could be the best part of your day! 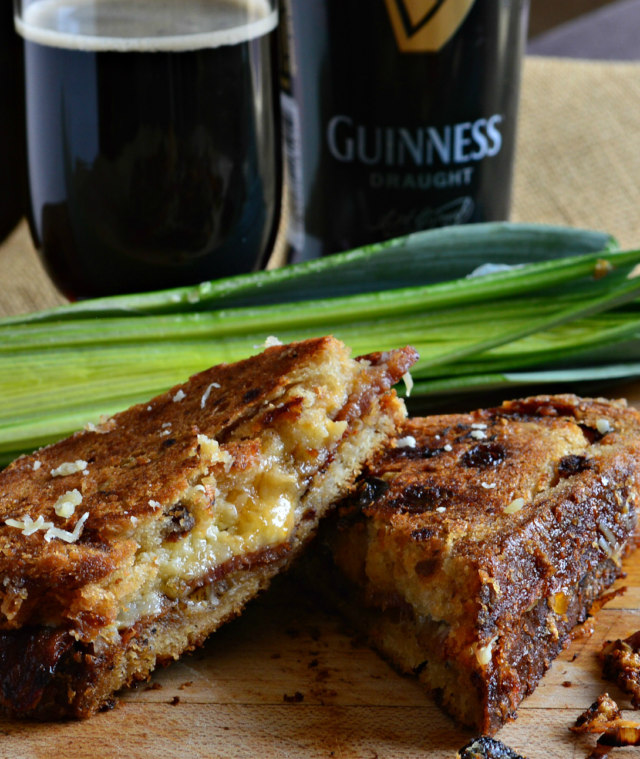 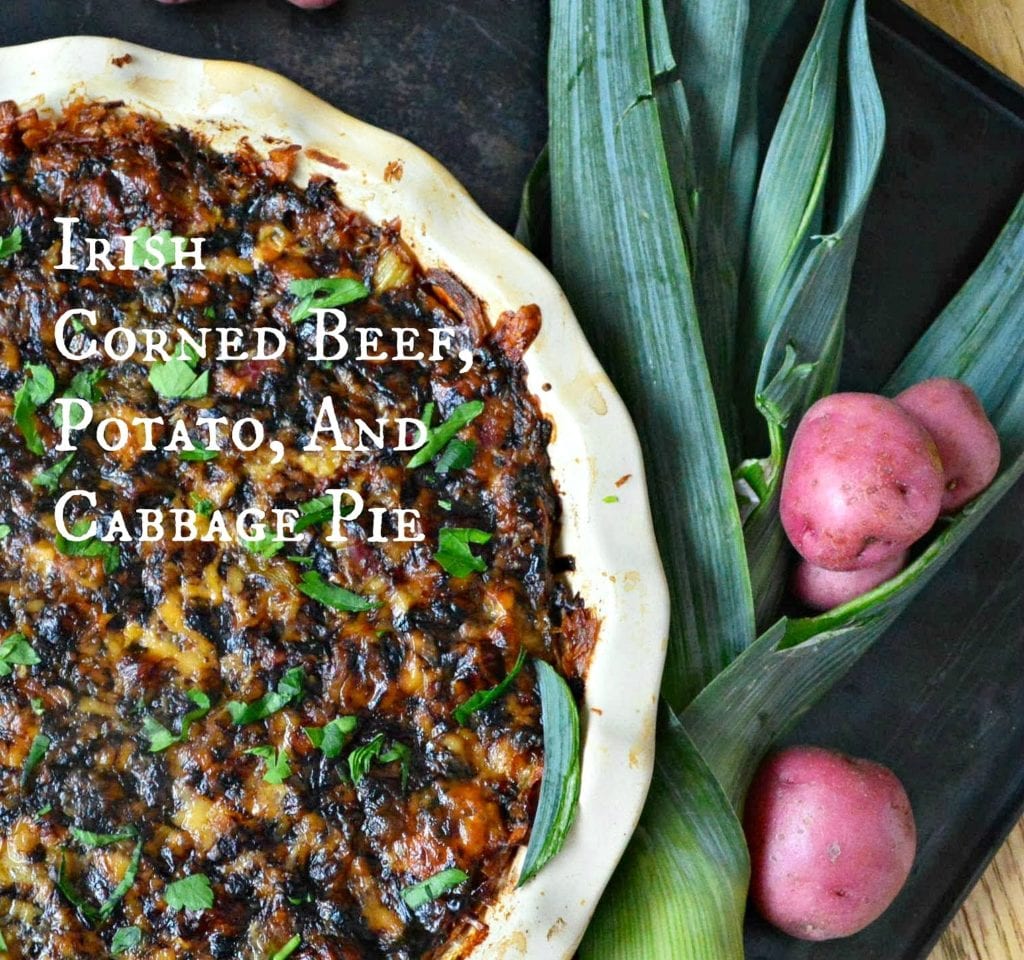 I love it when you share and pin the food! 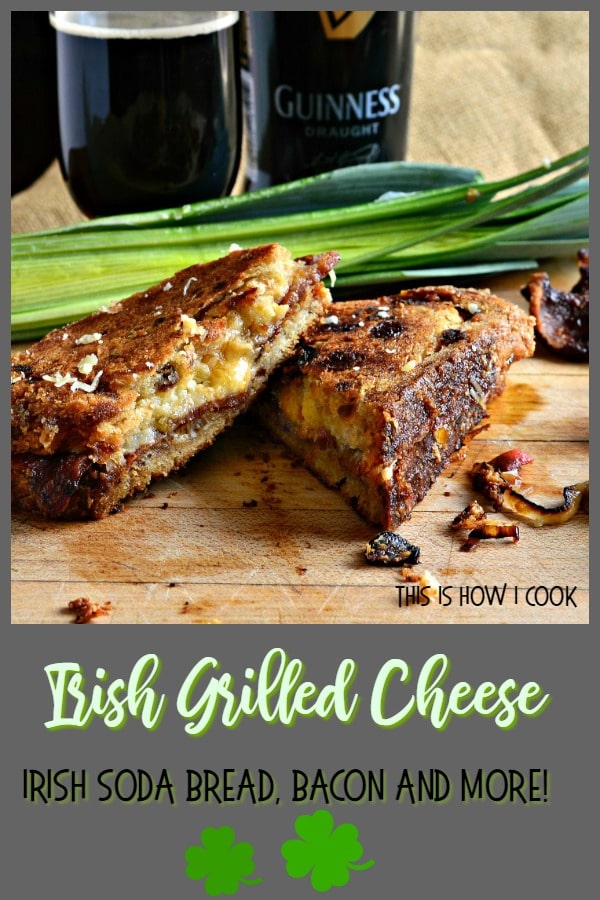 This sublime Irish grilled cheese sandwich begins with bacon that has been caramelized with Guinness, then spread with a paste of jam, Guinness and mustard. Add some Irish cheese and two slices of Irish soda bread and you have a grilled cheese masterpiece!

(I used a convection oven to bake my bacon. It will take longer in a regular oven. But it may not. Because I like my bacon crisp and you may not. Got that?)

Preheat oven to 350. Line a baking pan with foil. Place rack on top of that. Place bacon slices on the rack.

Make a paste of the pepper, sugar and Guinness. Smear it on the bacon.

Bake for about 30 minutes or until bacon is as crisp as you want it. It will crisp up a bit after removing it from oven. Now have a swig of Guinness while you grate your cheese.

In a small bowl mix the cheese with mustard, jam and Guinness.

Get out your favorite cast iron pan. Melt 1 T of butter in the pan over medium heat. Have another swig, and remove pan from heat because your bacon probably isn’t ready.

Now take the 4 slices of bread and put 1/4 c of cheese mixture on each slice. When bacon is ready, put 2-3 slices on two slices of the bread. (If you are nice give the one extra slice to the dog and eat the other.) Now carefully place the cheese topped bread slice without the bacon, on top of the slice with the bacon and cheese. Got that?

Now get that pan hot again and place both sandwiches in skillet. Take a piece of foil and place it over the top of the bread and using your hands smush the bread towards the bottom of the pan. Not too hard, as you don’t want the cheese all over the bottom. A little won’t hurt though, because that part tastes so good!

Cook about 2-3 minutes and then add 1T of butter to pan and flip your sandwiches. Replace your foil and smush again. I always keep my pan covered as the heat retained in the skillet helps the cheese melt. Now take another swig of that Guinness. Open another. And flip that grilled cheese onto a plate.

This is the best way to start St. Paddie’s Day!

Omigosh, that is like the yummiest sandwich I have ever seen, Abbe. You are really good at making all of us drool! ^.^

I try Sharon! Hope all is well!

I try Sharon! Hope all is well!

Damn delicious, i wish i had that on my lunch [email protected] Chef

OMG that caramelized crust --- this is calling my name!!

It sure called mine, Sue!

Abbe, i have been scrolling past this picture for DAYS now in my feed, and it's literally all i can think about now. It looks so delicious! we did a similar deal for st. patty's this year with corned beef and irish cheddar and it was incredible, just as comfort food should be. Love this!

Every now and then I get a good picture. I admit it makes me want to make it again! Thanks Shannon!

Every now and then I get a good picture. I admit it makes me want to make it again! Thanks Shannon!

Have no idea why your posts are not getting to me....I have signed up ..and everything..

I'll see what I can do. This happens all the time to me! Some I got forever just stopped coming! Mysteries of the universe, I guess! Did you verify?