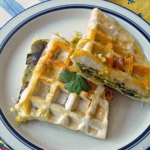 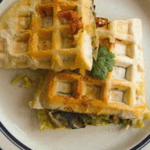 Waffle Iron Quesadillas are so easy to make. The  tortilla gets crispy on the outside and the cheese is melty on the inside. Stuff in some green chiles and cheese and you have an incredible combination! 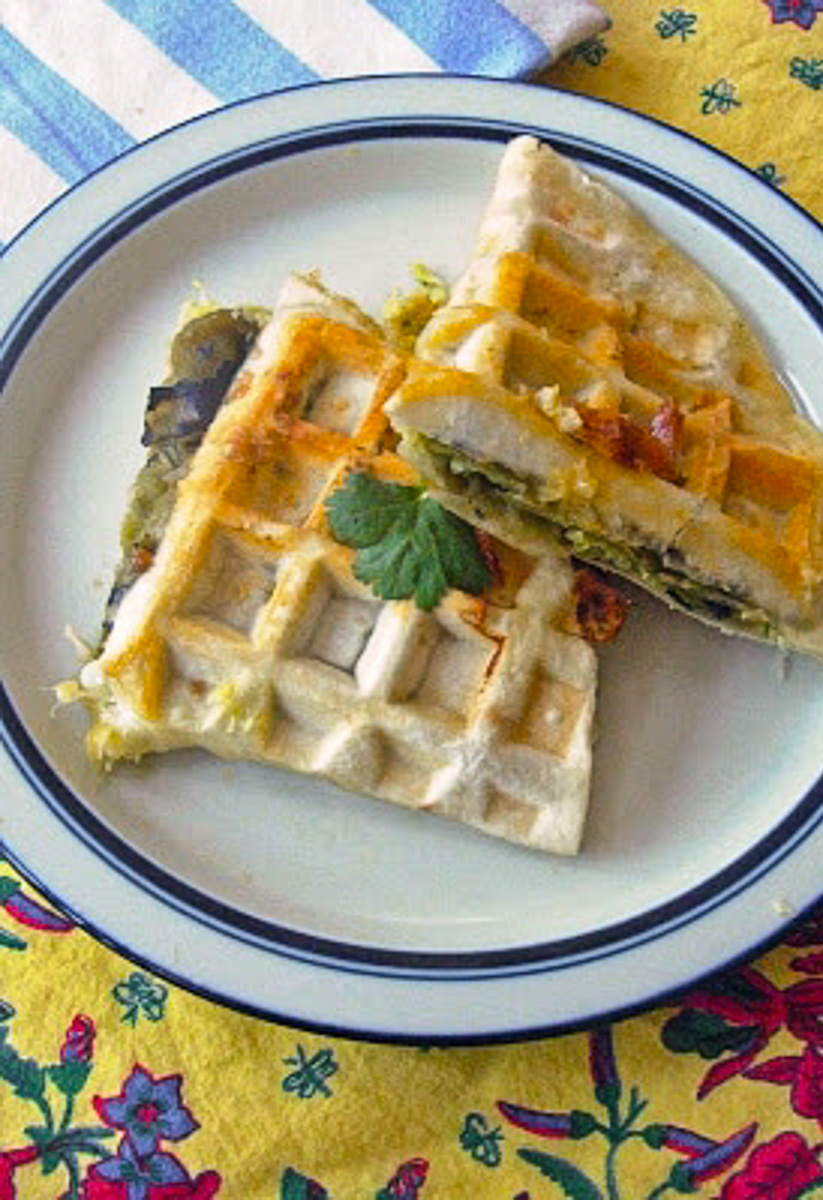 I discovered quesadillas during my first year of college in Arizona.

In Illinois Mexican food was virtually unheard of unless you bought those crisp taco shells that came in the package.

Never liking those made me think I didn’t like Mexican food.

Plus I had a father who claims and still does, that all Mexican food looks alike so it doesn’t matter what you order.

Guess what? He is wrong but Mexican food just ain’t his thang.

Anyway in Arizona I had a Mexican friend who quickly turned me on to the delights South of the border.

My first discovery was a chimichanga (which is a giant deep fried burrito) that at this restaurant was rolled in guacamole and then sour cream. I mean what was not to like?

My second discovery was the cheese crisp which is really just a giant tortilla toasted with lots of cheese that we ate at a place somewhere in Scottsdale called Dr. Munchie’s.

Yes, that was the real name. I think it went up in smoke a long time ago. 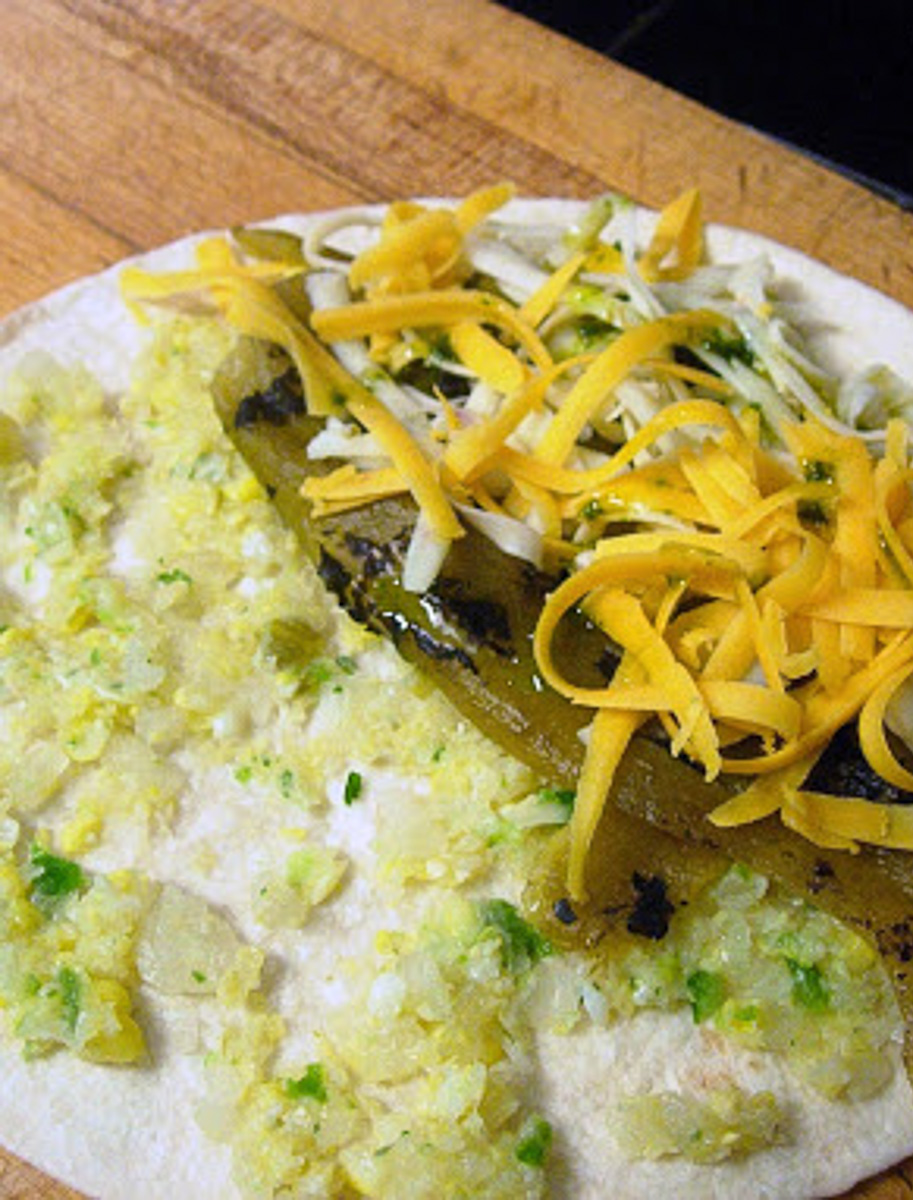 Well, a cheese crisp is really another way of making a quesadilla which I quickly became a fan of.

A quesadilla makes a great meal with a salad and they are also a great way to use up any leftover tidbits you may have in your fridge.

I often make them for my family and also for appetizers when company comes.

Generally, I make them on the grill which I preheat to low and then cook the tortillas until they are crisp and the cheese is gooey.

I fold them half way over after the tortilla has softened and then use tongs to flip them so that both sides are good and crisp.

Vegies include onions, mushrooms, peppers, green chilies, corn and potatoes. Potatoes are yummy on a quesadilla.

All varieties of cheeses can be used and one combo that I’ve often enjoyed is Brie with mangos and chorizo.

I often set up a Topping Bar, similar to a salad bar and let everyone design their own.

You can top with salsa or use salsa as a base like tomato sauce on pizza.

We put them on paper plates and then when it is your turn we slide them on to the grill to cook.

This is a quick fun way to make anyone happy. 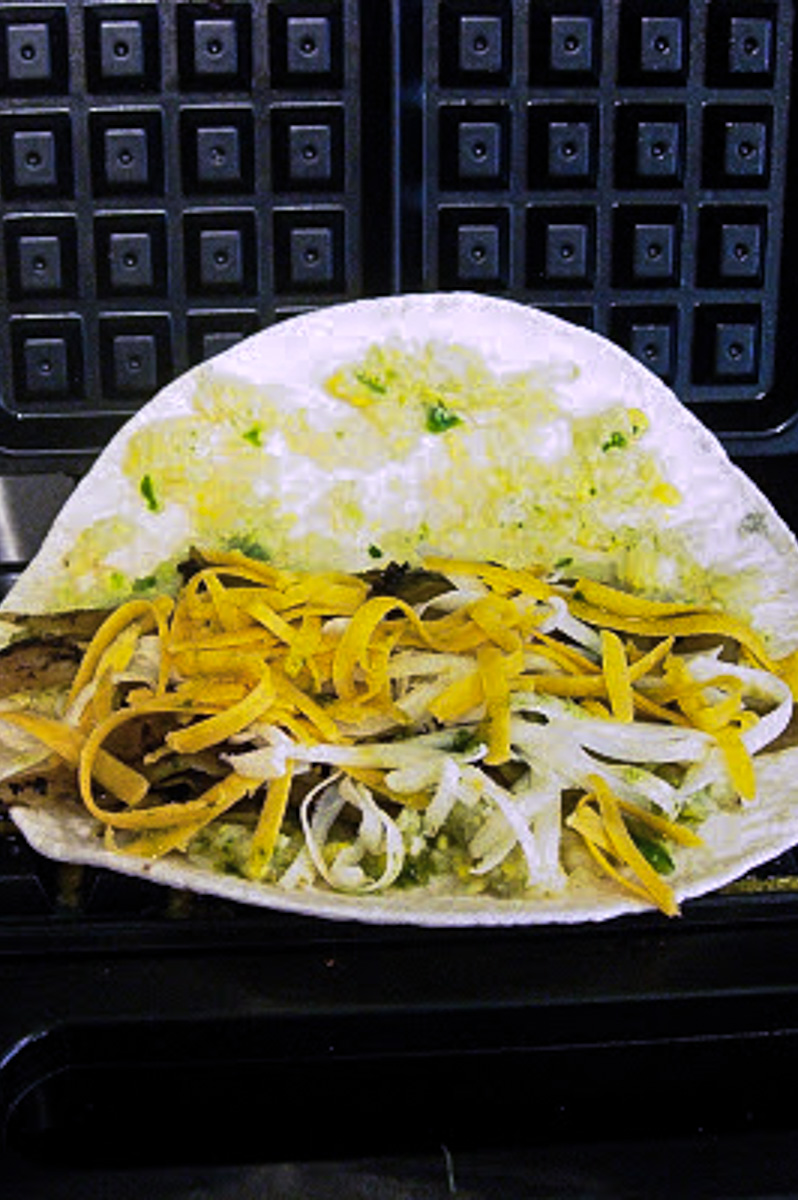 You can also cook them on the stove or under the broiler or in a convection oven.

The idea is to get them crisp on the bottom and baking them tends to make the bottoms a bit soft.

Recently I discovered something new. Well, at least it was new to me.

Quesadillas are great cooked in a waffle iron. Another use for a gadget so seldom used.

They get all toasty and instead of needing to buy a panini press, well – this is the next best thing.Plus it makes all these cute little pockets that can hold more hot gooey cheese. See for yourself.

Anyway – when I discovered I had all that corn leftover from yesterday’s Avocado Corn Soup– well I knew I would use it to make quesadilla or two.

Now you don’t need these to make a quesadilla as a few corn kernels and chilies and onion would be just fine, but I don’t like anything to go to waste.

If you can’t find Hatch green chilies and you want green chilies on your quesadilla pick up a few fresh Anaheims at the grocery and roast them on the grill until the skins are almost black.

Let them steam in a plastic bag until they are cool. You can then slide the skin of the chile right off.

Don’t forget to slice off the stem and take the seeds out. Once you do this you will be a chile convert, meaning you will never want to eat canned chilies again. 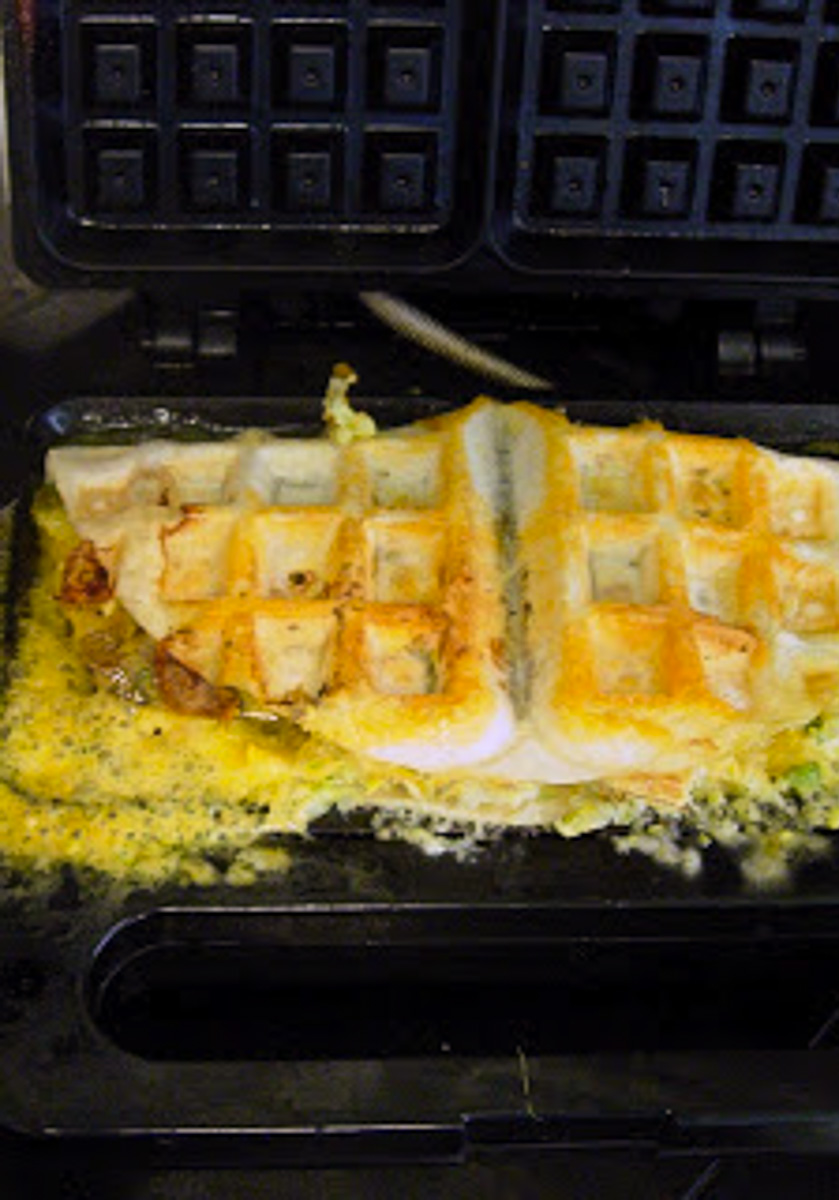 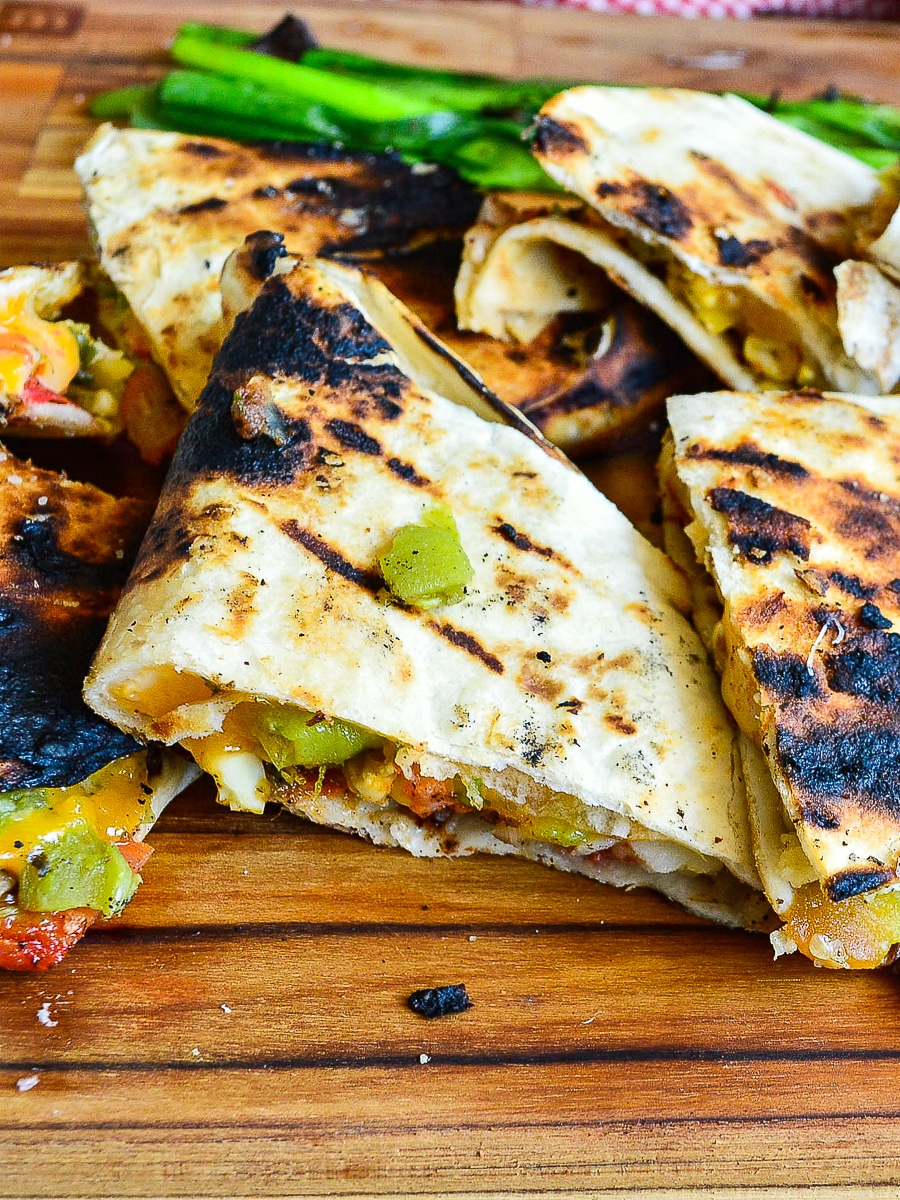 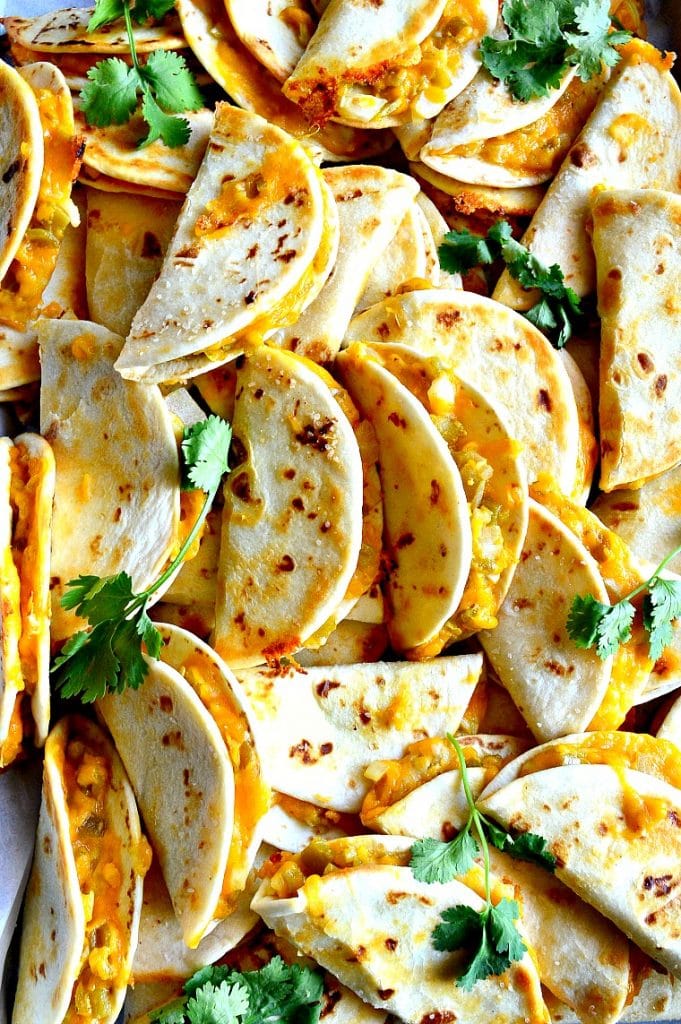 A simple green chile and corn quesadilla is so good. In fact this simple version is my favorite kind! And made in a waffle iron? What a fun way to jazz things up!

Place green chilies on one half. Top with grated cheese.

Place on heated waffle iron and fold in half. Close iron and let cook for about two minutes.

Now you can top with salsa and cilantro or sour cream or just eat this the way it is. These are so good I’m ready to make one for dinner. The first was my breakfast!

I'm very glad that I found your blog. There are a lot of recipes for all occasions for holidays and usual family dinners. I really like simple recipes because I do not always have enough time to cook a chic dinner. Thanks for the photos and the detailed recipes.

Looks appetizing. You take the original recipes and add your creative. I love your blog because here you can always find many useful tips.

Just wanted to let you know that I have nominated you the One Lovely Blog Award! I've been a fan of your blog for quite a while now! Your creations are all to-die-for!

I think we've had it a good twenty years...about time I started using it! Thanks for commenting!

Cool dish! We don't have a waffle iron and I sometimes think we should get one. I'm not sure why - we don't even eat that many pancakes - but I see all these nifty things you can do with one. Like this! I like free form recipes like this - it's the way I do my day-to-day cooking. Fun post - thanks.