Skip to Content
Jump to Recipe
The cheese crisp may look like a quesadilla, but it is not. Never folded and always crisp, found mostly in Arizona…you need to know about this! 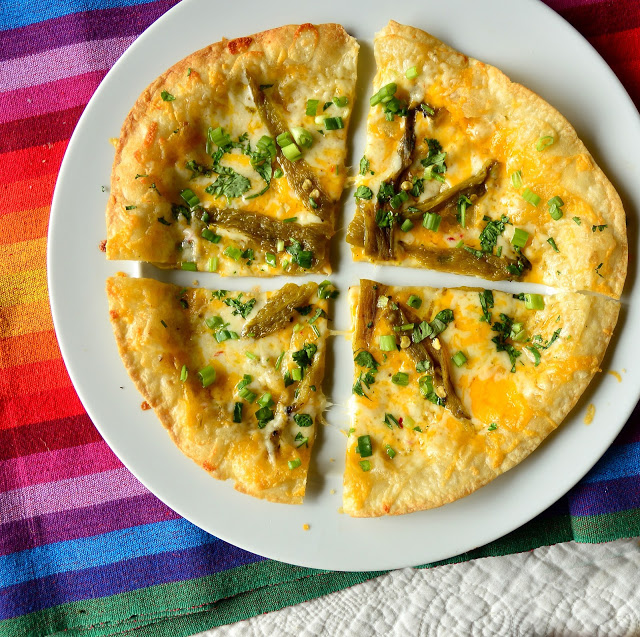 I’ve made a lot of quesadillas over the years…a grilled version, a party version and this waffle version. You might say I like cheese sandwiched between tortillas.

A few days ago I served Manservant a cheese crisp for lunch and he said…Oh. Quesadillas…We haven’t had those in a long time.

Except that of course, he was eating a cheese crisp and not a quesadilla. Semantics, one might say, however there is a difference.

The cheese crisp is said to have been invented in Tucson at El Charro’s Restaurant. I wasn’t there but I can tell you that I had many a cheese crisp in the short time I spent at ASU, many years ago.

Not having ever been exposed to Mexican food, you might say that the cheese crisp was a perfect introduction. I mean who wouldn’t like gobs of cheese melted on top of a giant, crispy, golden tortilla? I know no one!

And therein is what the cheese crisp is. Usually a 14 to 16″ tortilla on its own metal pan is set before the diner. It looks like a giant pizza with not much else except cheese.

It is even cut like a pizza and the first bite into the crispy crust  slays everyone. This is certainly one reason to head to Arizona, because not many places outside of Arizona serve them. I know not why. 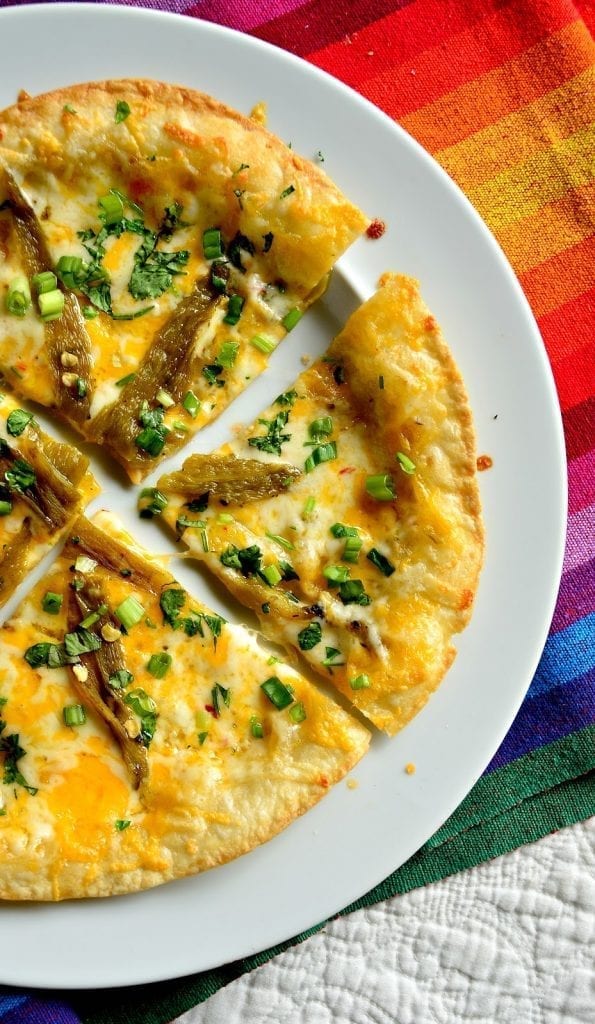 I believe the first place I had one was at Rosita’s. It is still there, which I did not know until about a minute ago. This knowledge may make me plan a visit to Tempe, next time I see my parents. Look what I found:

The second thing I found was that the chimichanga that I first had there slathered in guacamole from head to toe is also still on the menu. Definitely driving to Tempe!

So the cheese crisp should be made with the skinniest and largest in diameter tortillas that you can find. Skinny, so they become good and crispy, and large…just because!

They look better that way. I tried layering smaller tortillas to make a big giant pizza pan covered in cheesy tortillas, but IMO because they were layered in part, the tortillas just didn’t get crispy everywhere.

Not only that when you sliced the crisp into wedges – just like a pizza – the middles stuck underneath didn’t have any cheese. Sad, sad, sad. 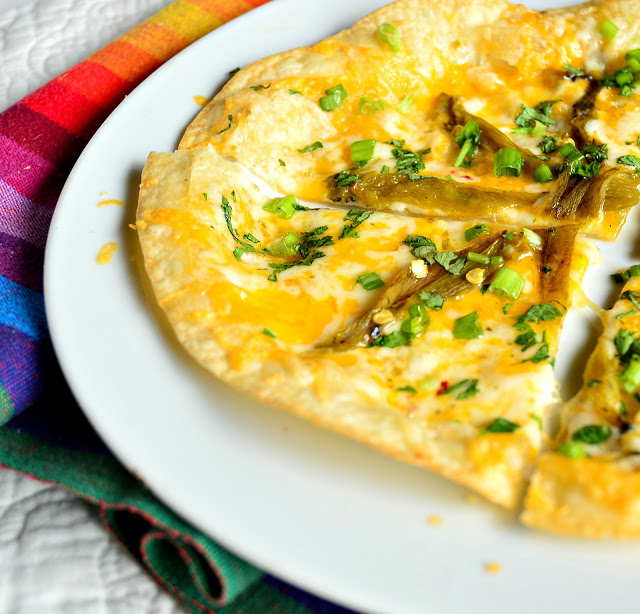 So IMO, the best cheese crisp recipe is one giant single tortilla.

One that shines on her own, topped with gobs of cheese, a sprinkle of green chiles and a touch of scallions. I have ovenproof dishes, so I just baked mine on a dinner plate. And it became the perfect lunch! 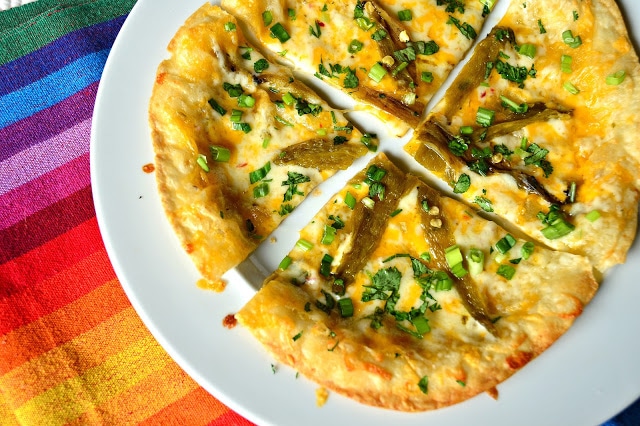 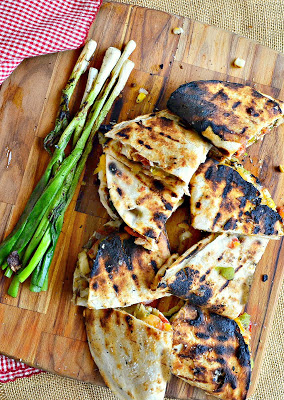 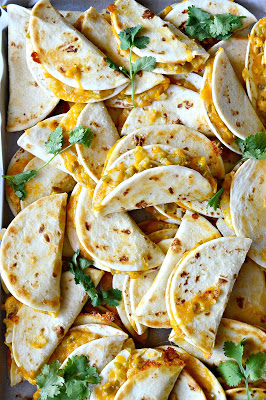 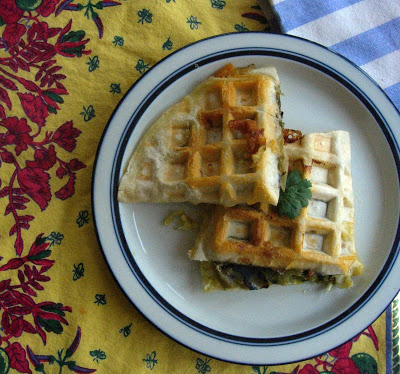 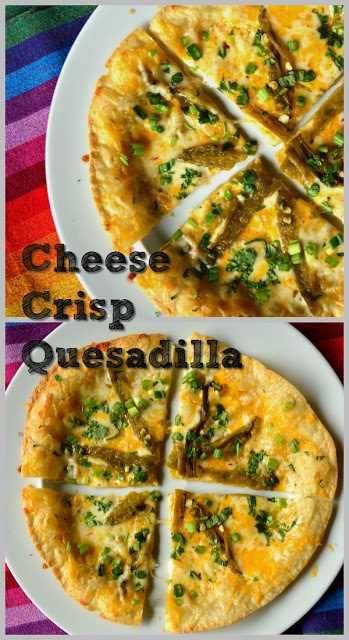 The cheese crisp may look like a quesadilla, but it is not. Never folded and always crisp, found mostly in Arizona…you need to know about this!

I have family in Arizona, and in recent years, I have been introduced to new (to me) regional food every time I visit. I have not heard about cheese crisp quesadilla. They will be added to my list of things to seek out the next time I'm there, so for now, I'll have to make them myself. Pinning.

I lived in Phoenix for 40 years, my favorite thing to order was always a cheese crisp! Don't find them her in CA either. I try to make them at home, but they are not the same, so I am going to try your recipe for sure. Thanks!!

I could eat one of these every, single day for lunch! So yummy!!

Yum! I make tortilla pizzas, very similar. I guess again, just semantics. But whatever you call them, they're good! And your version with the green chiis sounds wonderful!