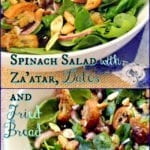 This simple spinach salad with a za’atar vinaigrette tells you everything you need to know about how to make a salad! 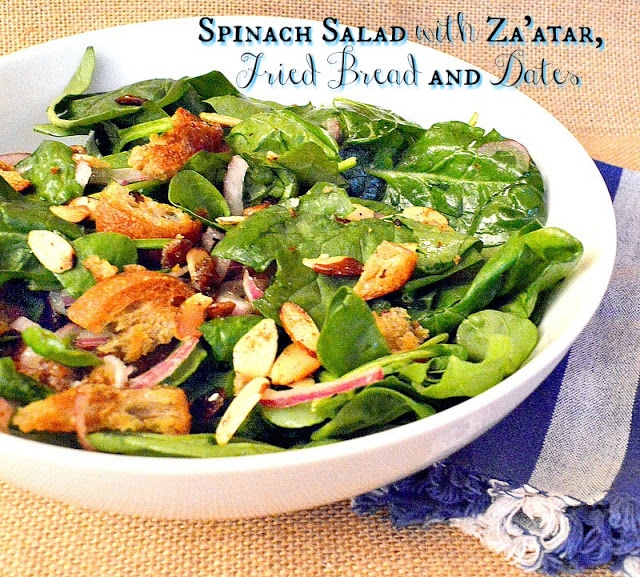 The salad is not often given  much respect.
Bags are ripped open – processed dressing from a jar poured on – boxed croutons…People, we can do better.
Growing up, bottled dressings or Good Seasons or buttermilk ranch from the packet were the norm. Now we have so much more to work with!
I  remember my mom making a vinaigrette that she doused her head lettuce salad with. And I do mean doused.
My mom was always a bit heavy on salad dressing, in my opinion. But I give her credit; at least it wasn’t out of a bottle.
And though the lettuce usually consisted of head lettuce only, as that is all I remember being able to find at the grocery, she did add ( or I should say, I added under her direction, as this was the kids’ job), tomatoes  and cucumbers and green onions.
Maybe some radishes or a green pepper. It was fresh and we had one every night.

Thank goodness our produce departments have become WAY so much better.

Salad can now be the star of the meal and I love those that are. I’m always on the lookout for something new, but in general, I make a pretty good salad.

I will tell you though, that manservant always “saves” his salad to the end of the meal.

Salad isn’t his thing, though he does always eat it, and if there are too many extra veggies in it, there is always a neat little pile on the side of his plate.

His favorite salad is a Caesar and that is easy to explain, given the fact that veggies aren’t really his thing.

He, of course, would tell you that he really doesn’t mind eating veggies as long as they don’t interfere with the main ingredient on his plate, which usually is chicken or fish. 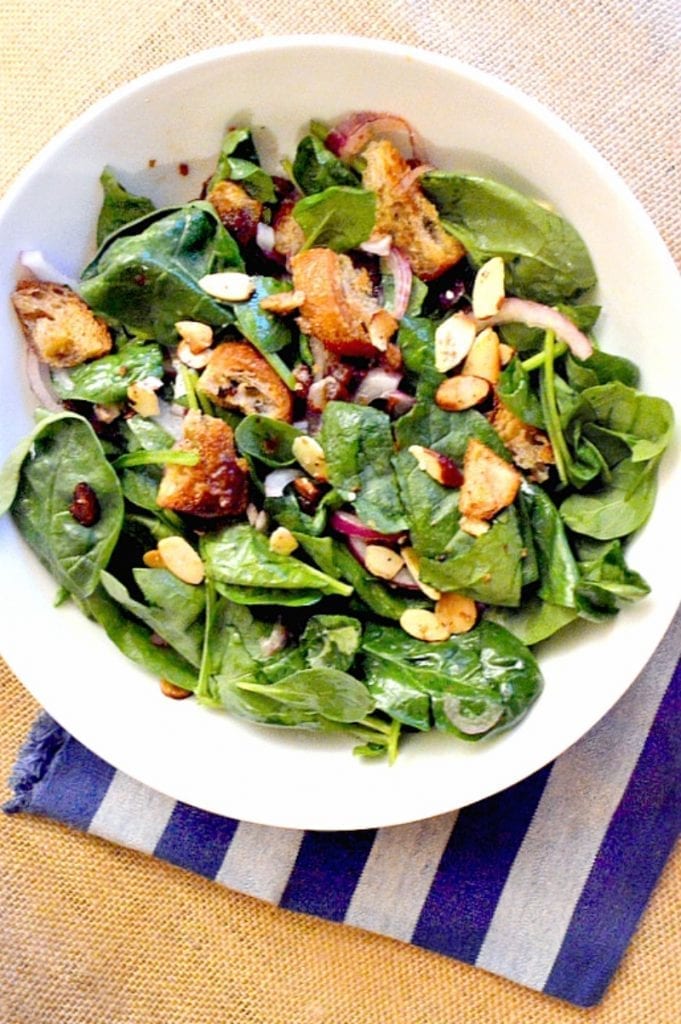 How To Make a Salad:

1. The greens – I like to vary these from night to night, but I love arugula, romaine, baby lettuces and spinach and kale. Manservant hates kale so I only buy the baby kale. Every now and then I throw in bibb lettuce. I don’t usually mix these lettuces, but by the end of the week, it is good to do that.
2. Veggies – these often consist of peppers, cukes, tomatoes, onions of any variety , beets, roasted squash, radishes, peas, and whatever else seems to go with the main course
3. Cheese – Not always, but I love a bit of cheese in my salad; but only if the main course does not have cheese in it.
4. Crunch  – This could be nuts or croutons, olives, pepperocini, sun dried tomatoes, capers, pasta, rice. Yes, I know all of these aren’t quite crunchy, but they give a lot of texture to a salad.
5. Other meats – Often I add a little pepperoni or chicken sausage that comes in a variety of flavors, I like to use a spicy chicken chorizo with Spanish dishes, for an example.
6. Fruits – Salad is great with apples, and berries and dried fruits. I love dried apricots or raisins, currants or dates. A salad feels positively luxurious when dried strawberries or dried cherries are thrown in. Dried fruit gives great texture and flavor to any salad.
7. Dressing – Usually a basic vinaigrette that I vary in flavor with different vinegars, mustards, honey, brown sugar or maple syrup, and even different oils.

Hopefully, by thinking of a salad as the sum of its parts, one can see that with a little imagination the salad can become one that everyone will talk about AND consume with gusto.

Recently, I made this spinach salad that I really fell in love with.

It is another Ottolenghi adaptation and one that I’ve already made several times, because I like it so much.

It contains za’atar, which  is a spice mix that consists of toasted sesame seeds, thyme or hyssop, ground sumac and some salt.

I love the flavor that it gives and I love this all by itself  on bread drizzled with a bit of fruity olive oil.

One must be careful when buying za’atar as I’ve seen some concoctions that contain cumin and other ingredients that aren’t standard for za’atar.

One thing is for sure- the above is a great take on how to make a salad. And this salad is very worth making! 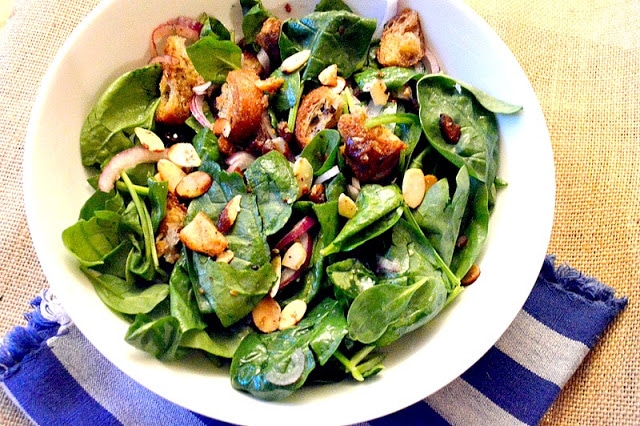 This is a great spinach salad. Every ingredient is important and if you have never had za’atar you will love it!

Put the vinegar, onion and dates in a small bowl. Add a pinch of salt and mix well. Leave to marinate for at least 20 minutes.

Heat butter and 1/2 the olive oil in a medium frying pan over medium heat. Add the pita or bread and cook for up to 10 minutes, until bread is gold and crispy. Add sliced almonds at end of cooking time to brown them, just a bit. Remove from heat and mix in the za’atar, chili flakes, and 1/4 t salt. Set aside to cool.

Toss spinach leaves with the bread mixture in a large salad bowl. Add dates and red onion mixture, the remaining olive oil, the lemon juice, and another pinch of salt. Taste for seasoning. Serve and Enjoy!

Keywords: how to make a salad, za'atar, spinach salad

I have never heard of some ingredients, but the salad looks absolutely beautiful and flavorful !

This is such a wonderful salad packed with an abundance of flavour. Thanks for sharing!

I agree, the markets are way better in carrying wider variety of fresh produce. I love your simple and flavorful salad. :)

I am going to have to try that seasoning, I think I would love it. I am with you on salads, the more things to the party the better! Fruit, nuts, craisins. My husband loves the wedge salad though - 1/4 head of lettuce, blue cheese dressing, and if he's feeling saucy, some croutons! So glad you joined the healthy FB page Abbe!