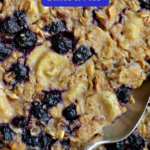 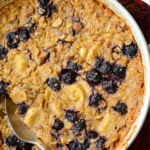 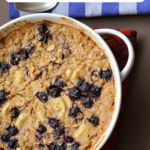 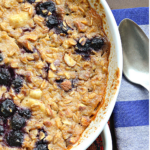 This blueberry baked oatmeal is a delicious way to start your day. Made with bananas, blueberries and applesauce, this nutty oatmeal is loaded with fiber! 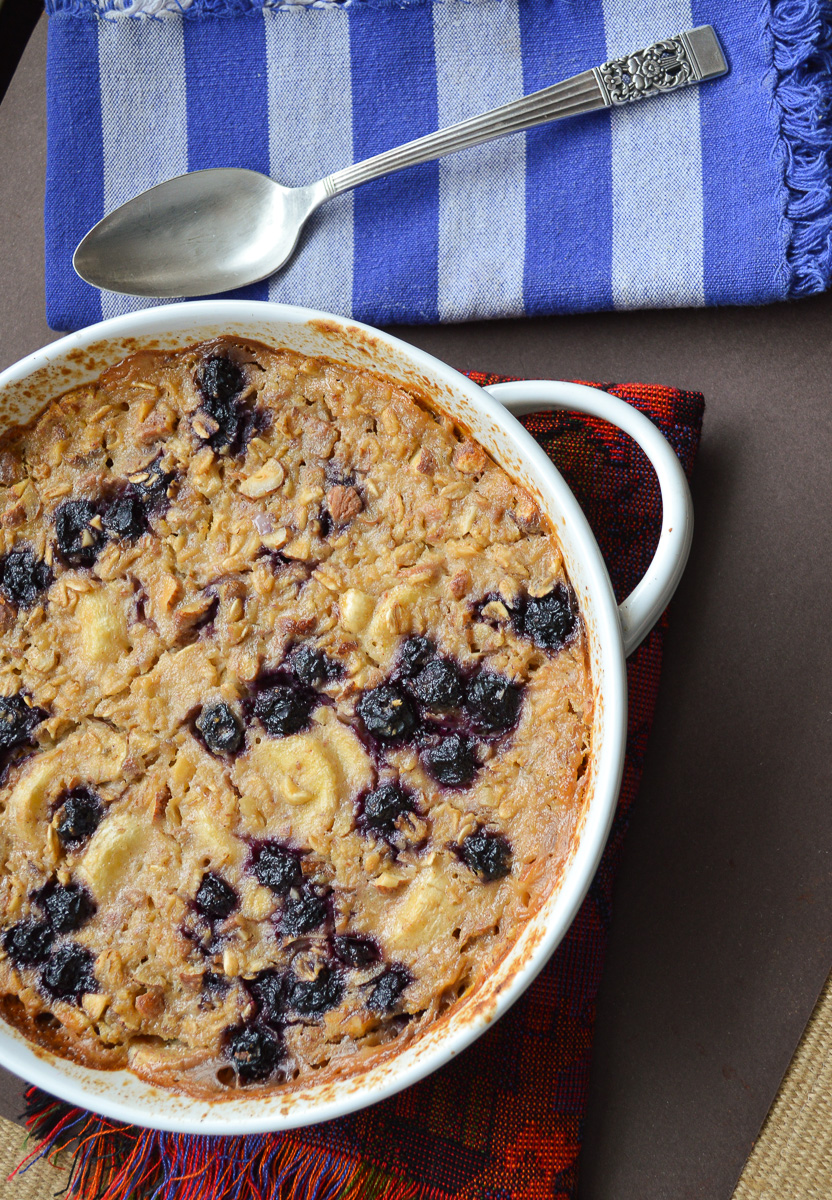 I love breakfast. I love hash browns and scrambled eggs and bacon. I love French toast and pancakes. And I love oatmeal. It didn’t start out that way.

As a child I remember eating Oscar Meyer liver sausage on toast with little dried minced onions on top. Yuck.

And I remember my father making pancakes or fried eggs on Sunday morning.

(He let my mother sleep in because this was always on a Sunday morning before Sunday school.)

My father was a cook in the army, we were often reminded.

I remember him telling us about the SOS dinner. He called it shit on a shingle. I am quoting here.

It was, I believe dried shaved corn beef in white gravy over toast.

Luckily I never had to partake in that.

But now that I’m thinking of it we did eat a lot of those Buddig shaved meats that come in plastic packages.

I think I might have had those on toast, too. 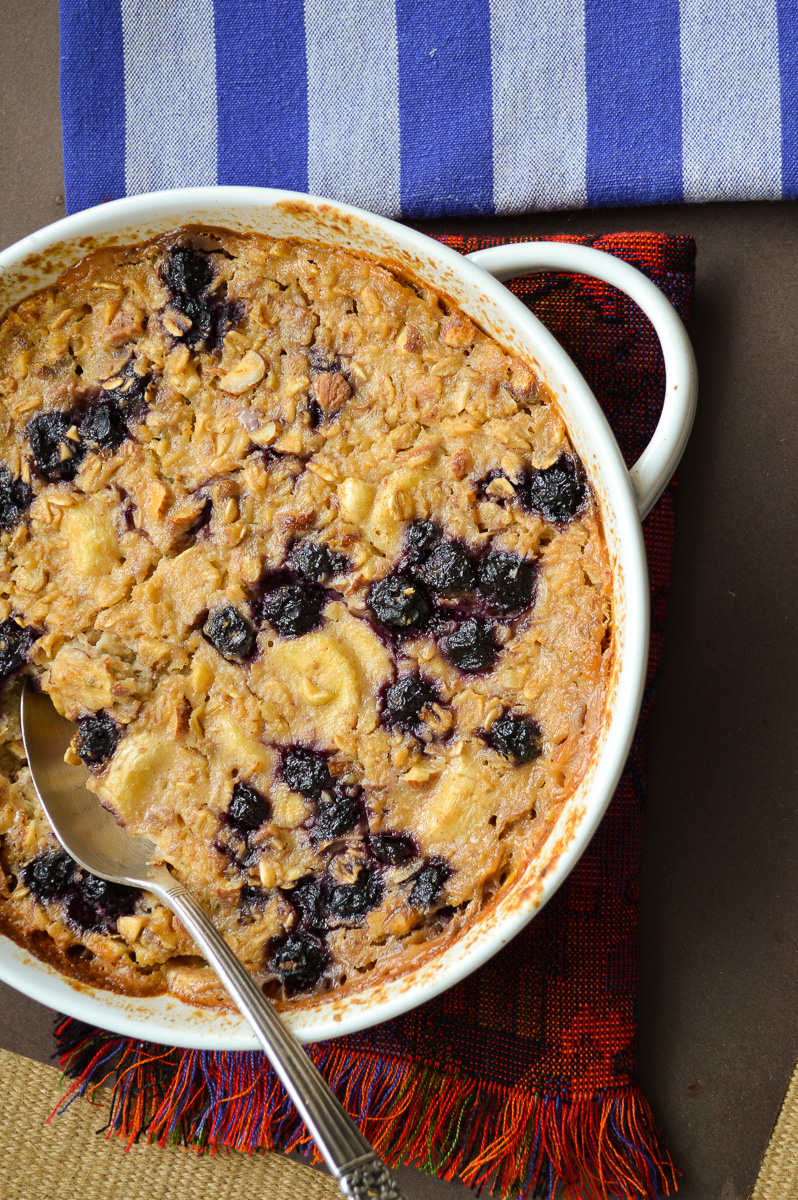 But back to oatmeal. I was not a fan of it growing up.

I remember my brother eating oatmeal. It never looked good to me.

It was soupy and lumpy and tan. It was not this healthy oatmeal bake!

He sprinkled poured sugar over the top, salted it, put on lots of butter, no it wasn’t butter because I don’t remember butter in my house, only margarine, or that stuff that was in a tub, (which was
probably margarine, too) and then he poured milk over it.

No fruit or nuts so no oatmeal bananas thing going on.

Just soupy, lumpy oatmeal topped with sugar and salt and that yucky margarine that always for some weird reason had a coconut taste to me.

But then again, he probably didn’t like liver sausage.

Well, it took me a long time to make oatmeal. I think I was on a diet when I first tried it.

And guess what?  I discovered I liked it. 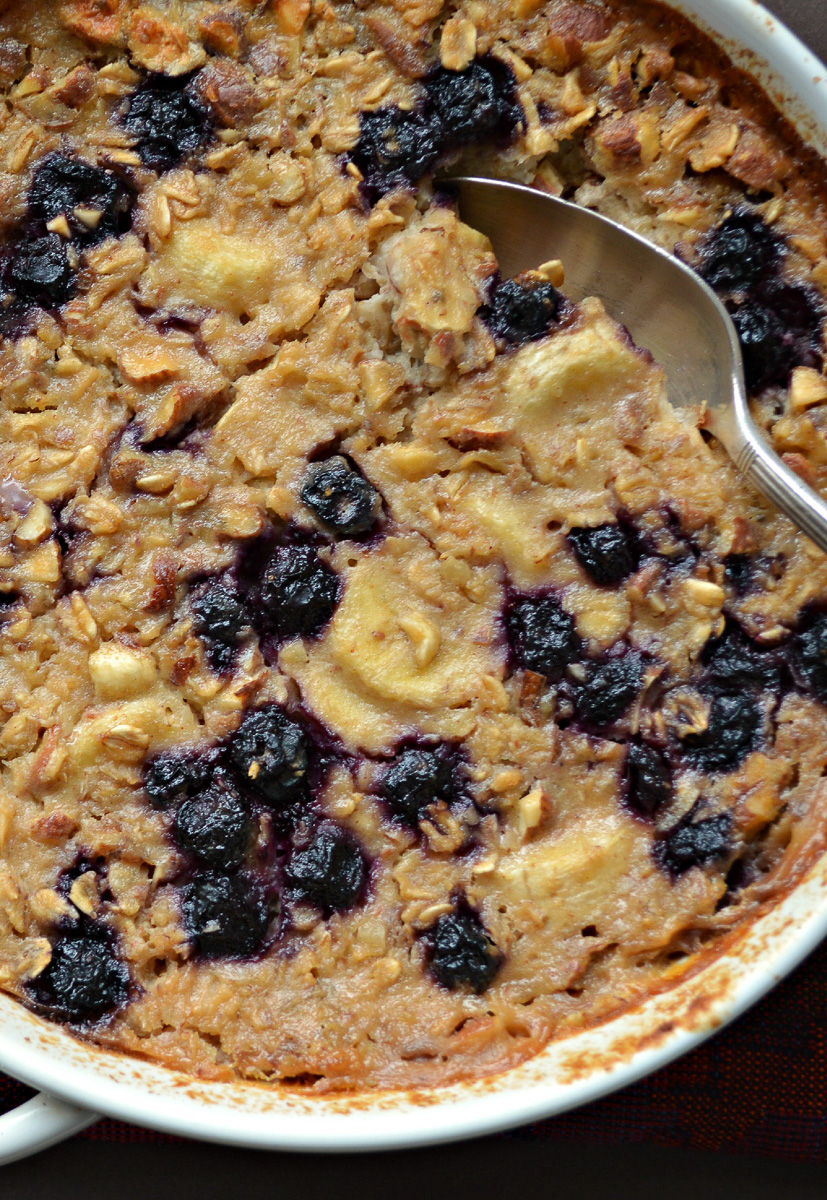 Maybe it was because granola was popular and I was getting use to eating toasted oats that I then decided I could cook them. Whatever.

I am now very happy to eat oatmeal.

I thought it sounded good but more complicated than I wanted to do first thing in the morning. So I simplified it.

My husband eats oatmeal every day and I don’t like his version.

It is thick and gloppy and tasteless.

And when he is kind and makes it for me, I try to be polite, but I know when my daughter says to me, “Dad made you oatmeal” and she hasn’t put her spoon in it first, well, you get the picture, don’t you?

Maybe next time when he wakes up before me he’ll pop some of this into the oven.

Because that is what it is good for.

Get your dish out. Mix it up in a bowl. Put it in your greased dish to bake while you shower.

Get dressed. Walk back to the kitchen where you are greeted with this sensuous smell of bananas and cinnamon.

Whether you made it or he made it won’t matter.

You will just be glad that you have a great way to start your day! 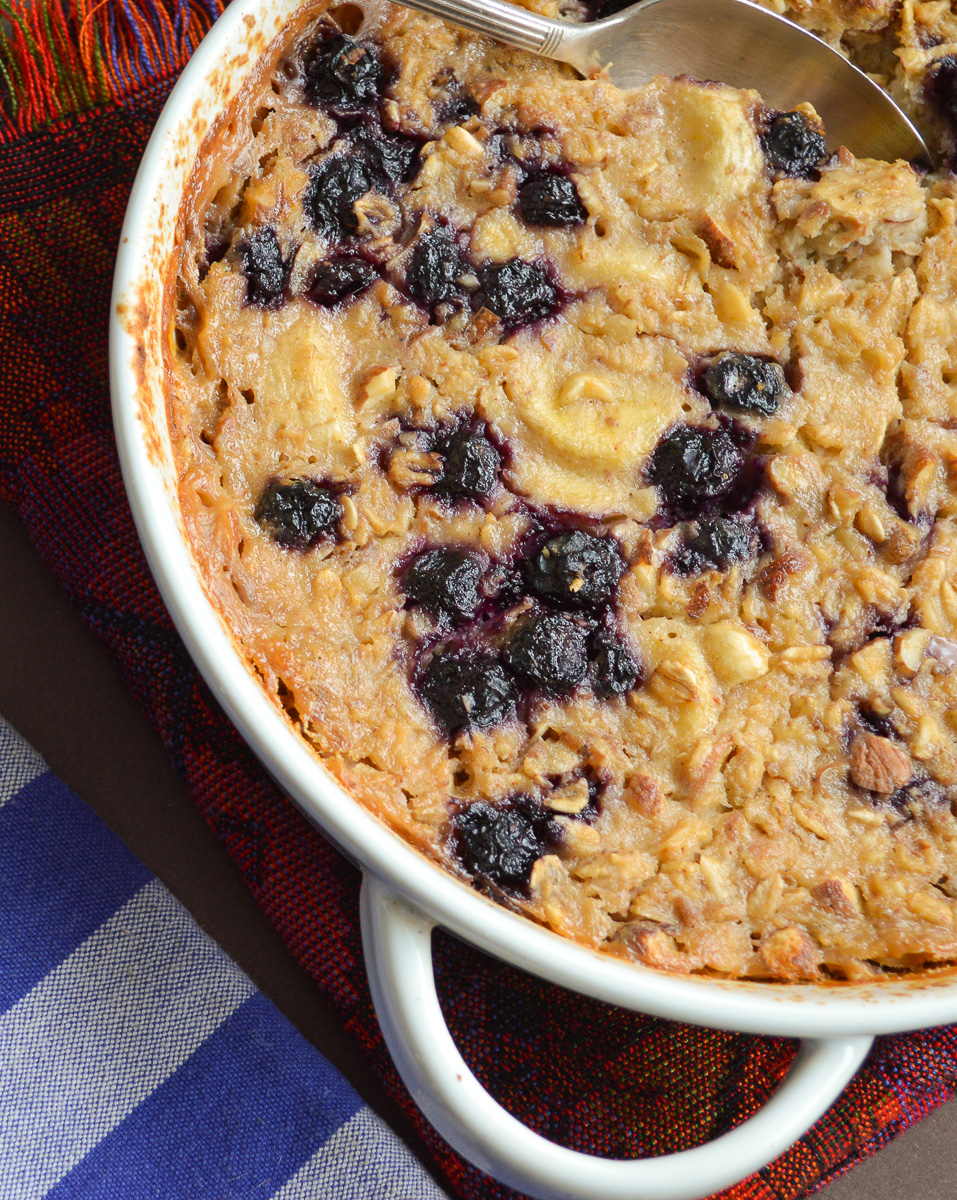 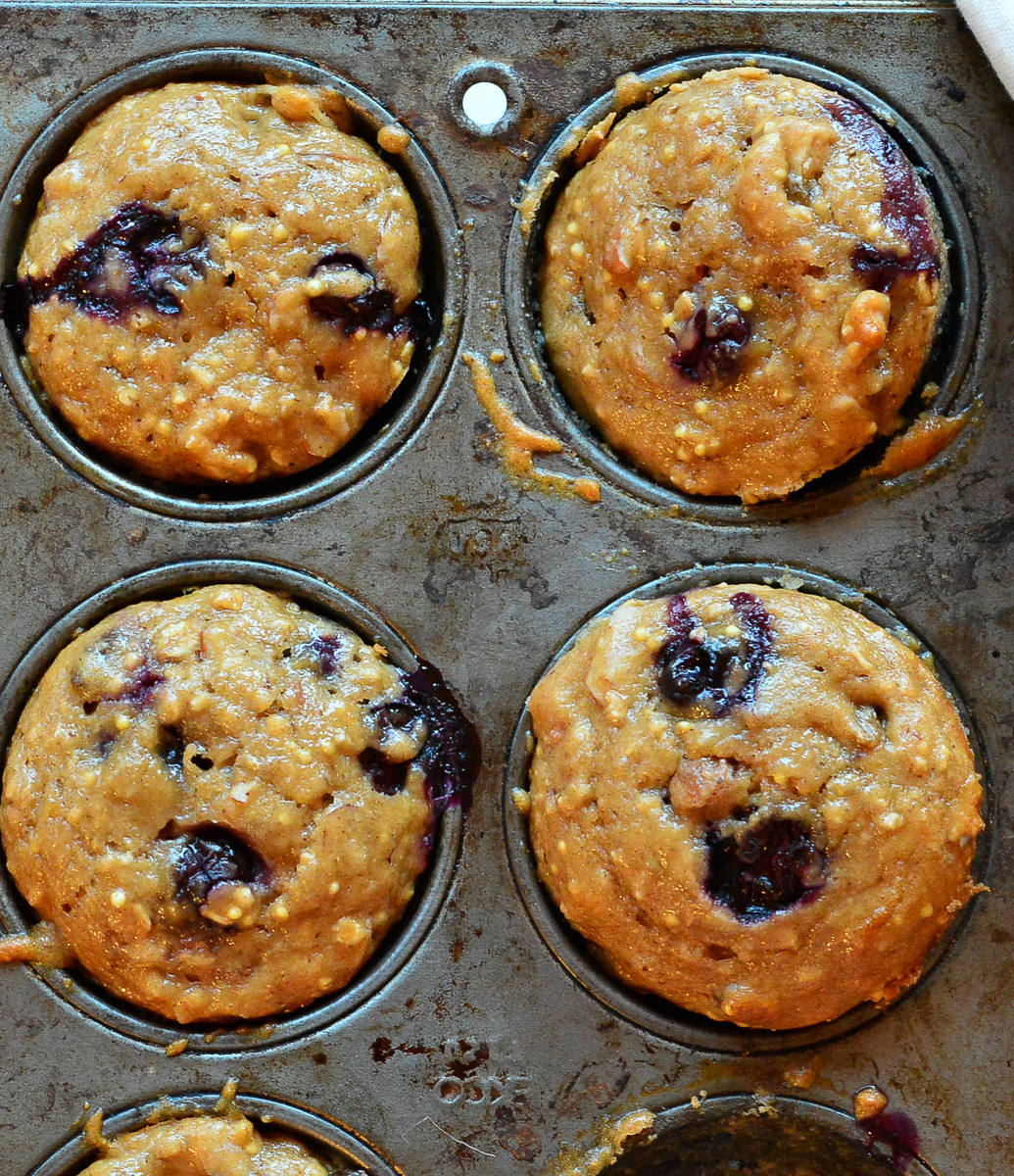 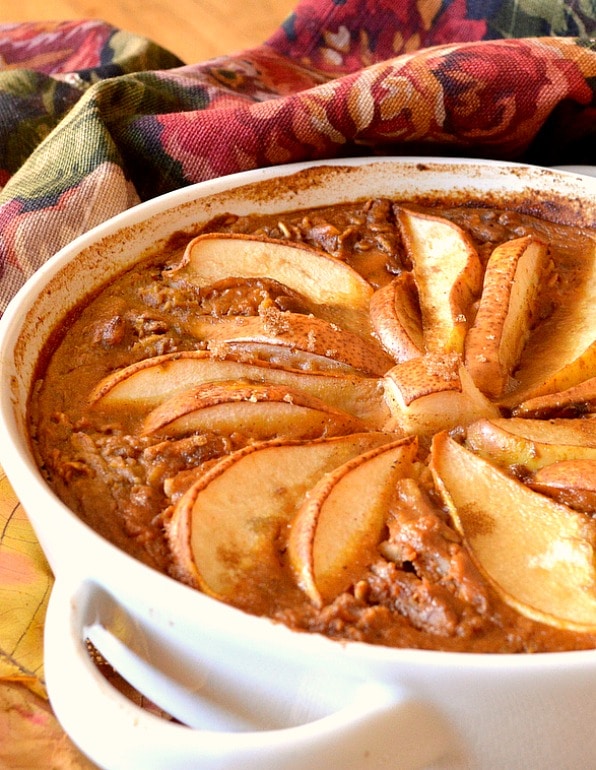 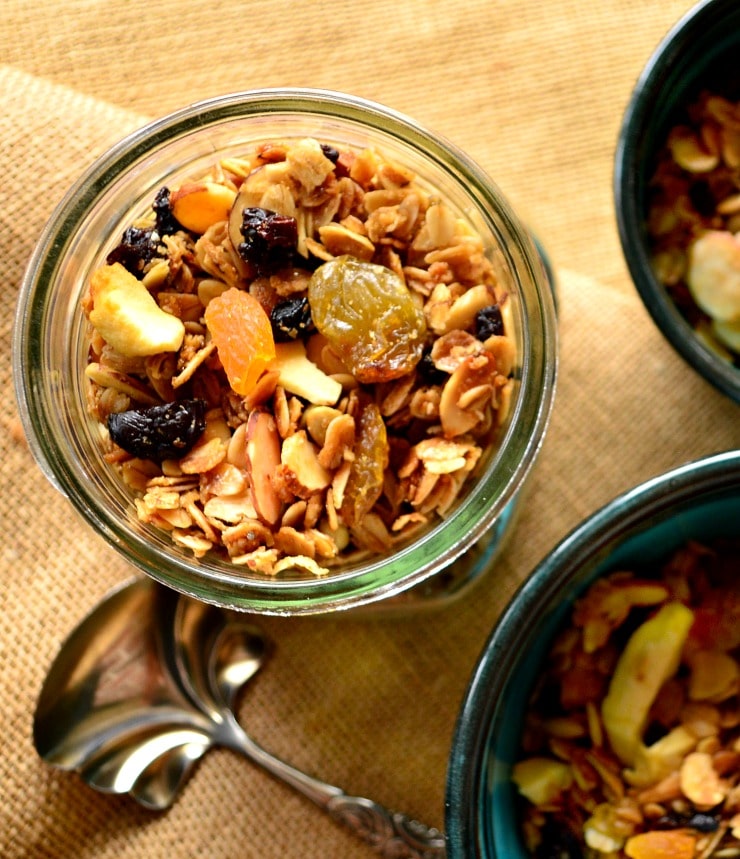 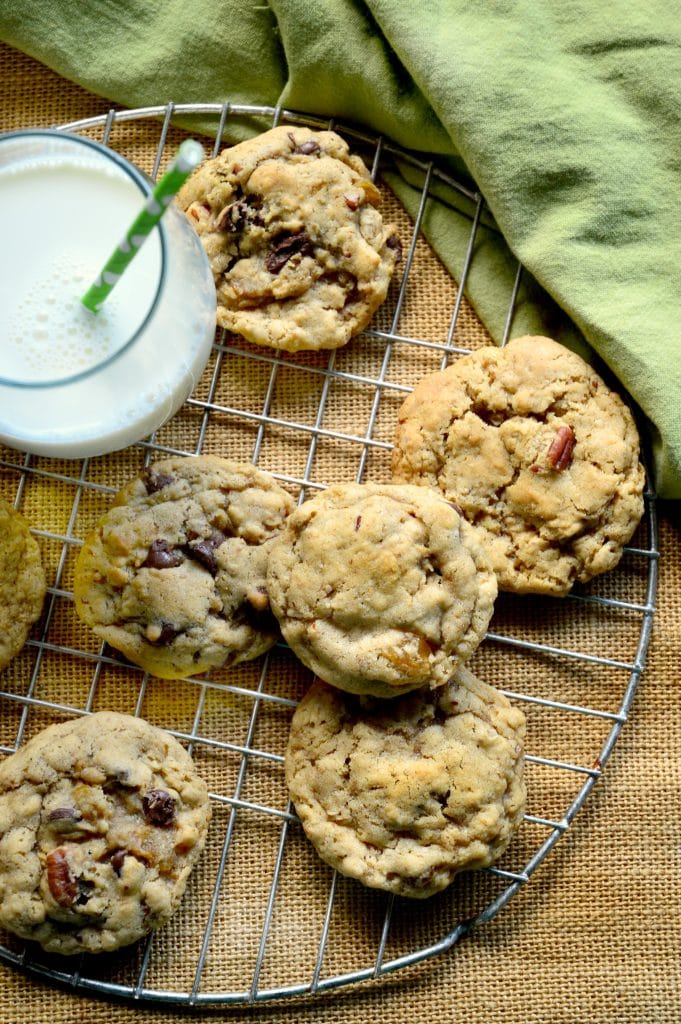 This blueberry baked oatmeal with applesauce and nuts is one great way to start your day.

Mix all ingredients in a bowl.

Spread in a greased dish.

Bake for about 45 minutes.

Pour more milk over top if you want. Eat and enjoy.

Oatmeal can be reheated the next day and it can also be eaten cold.

I'm so glad you liked it!

Great with oatmeal!!!! Looks so tempting with blueberry

This looks crazy delicious!! Exactly what I need to start my day off.. I'm from London and apple sauce is not really a staple in our supermarkets, is it a crucial ingredient or is there a substitute? Have a great day! Manu

Manu, other than pureeing whatever fruit you prefer, you need something to thicken this. Since applesauce isn't available do they have other fruit sauces like pear, perhaps? If you don't use it, it will just be a bit thinner.

The bananas are the best part Cake Whiz, but chocolate oatmeal sounds pretty good to me! Natalie, this sounds right up your alley. I know you will enjoy it!