These crispy, roasted Brussels Sprouts are a great side dish and a great appetizer. In fact, keep reading because it seems like almost anything can be done to a Brussels sprout! 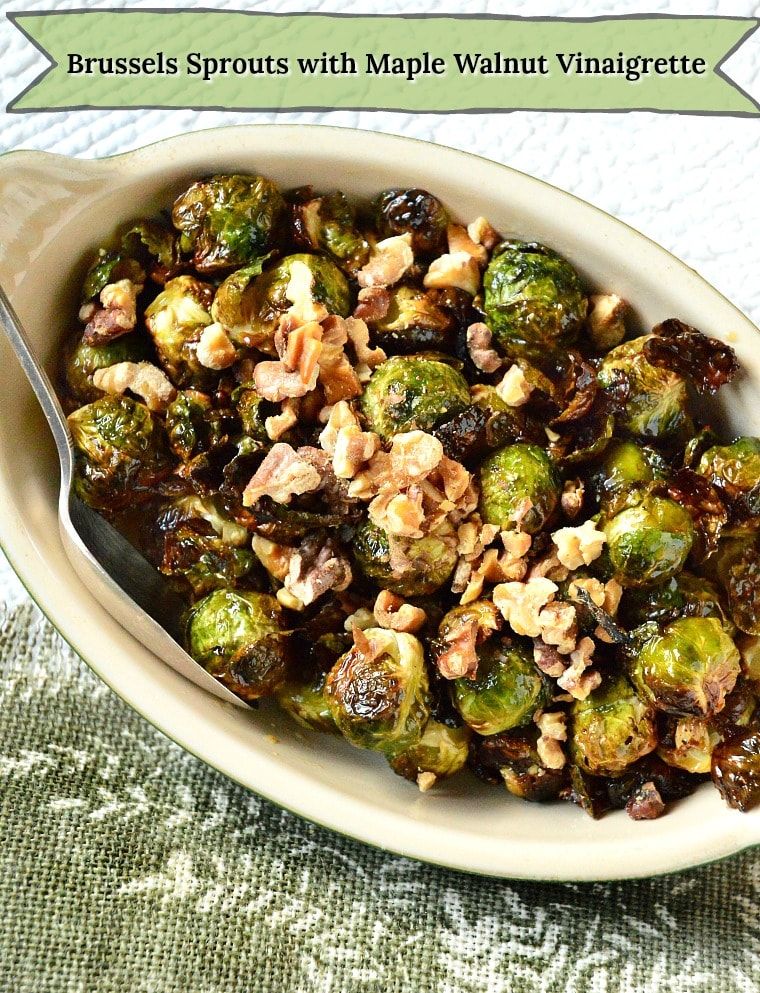 I’m trying to get myself excited to write about Brussels sprouts. Specifically how to cook Brussels sprouts. It seems eating them is no problem. Well, at least it isn’t now. As a child there was a BIG problem because there was no way I was putting one of those tiny green cabbages in my mouth. It appears tastes do change, which is what I always told my kids when they were wee ones.

Perhaps this funny vegetable was one I did not like, because I didn’t even like cabbage. And perhaps because I remember my mother boiling most every vegetable that came into our home; but that might be because they were all in frozen packages labeled Birds Eye! It was hard to find many fresh vegetables way back then!

Well, it appears Brussels sprouts are having their time in the sun. They have made it onto the center stage and are basking in curtain calls. Brussels sprouts are a great veggie that can be grilled, roasted, braised, sauteed and steamed. They can be used freshly shaved in salads. It appears there is almost nothing this baby cabbage can’t do. So let’s start by answering some of the common questions about Brussels sprouts, shall we?

Are Brussels sprouts and cabbages related?

Well, I guess they are considering they are in the same family. With the cabbage we eat the head and with Brussels sprouts we eat the buds. I’m sure you’ve all seen the tall stalks with the buds attached that are in the groceries this time of year. 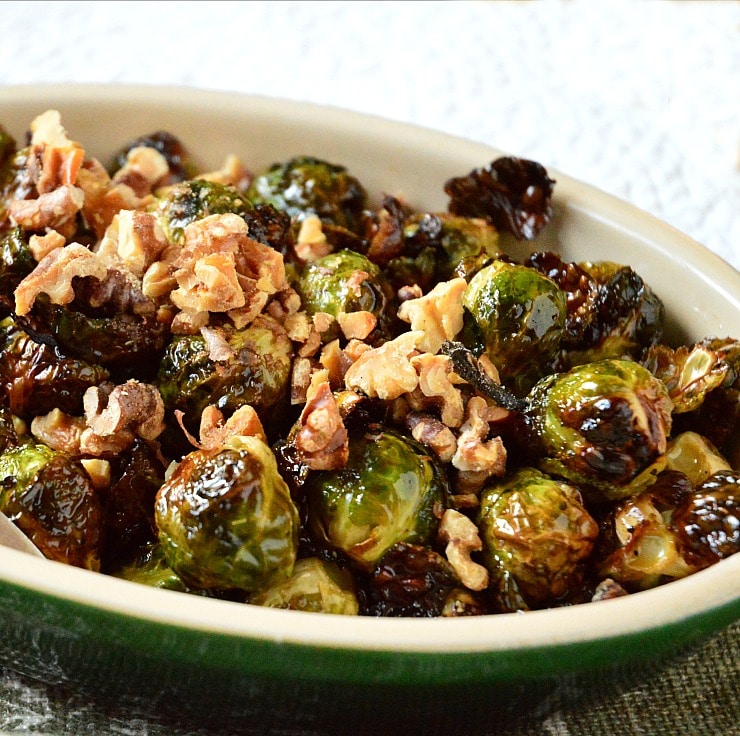 Do Brussels sprouts come from  Brussels?

Yes, actually they do. Brussels sprouts were first cultivated around Brussels in the 16th century. They do well in cold climates and have a long growing season. And really, I’d be disappointed if I’d found out the answer was no!

What happens when Brussels sprouts are overcooked?

For starters, your house probably smells bad. And the Brussels sprouts probably taste worse than your house smells. So don’t overcook them. PLEASE! If you don’t like Brussels sprouts I must tell you that scientists have found  some people have a Brussels sprout gene tasting receptor on their tongue, which apparently makes them taste bitter. Maybe it’s the same one that makes people think cilantro tastes like soap. I do not have either gene, in case you were wondering.

Are Brussels Sprouts good for you?

Does this really matter? I think you know they are. Think of all that fiber. All those minerals. But really in my mind all that matters is they taste good! 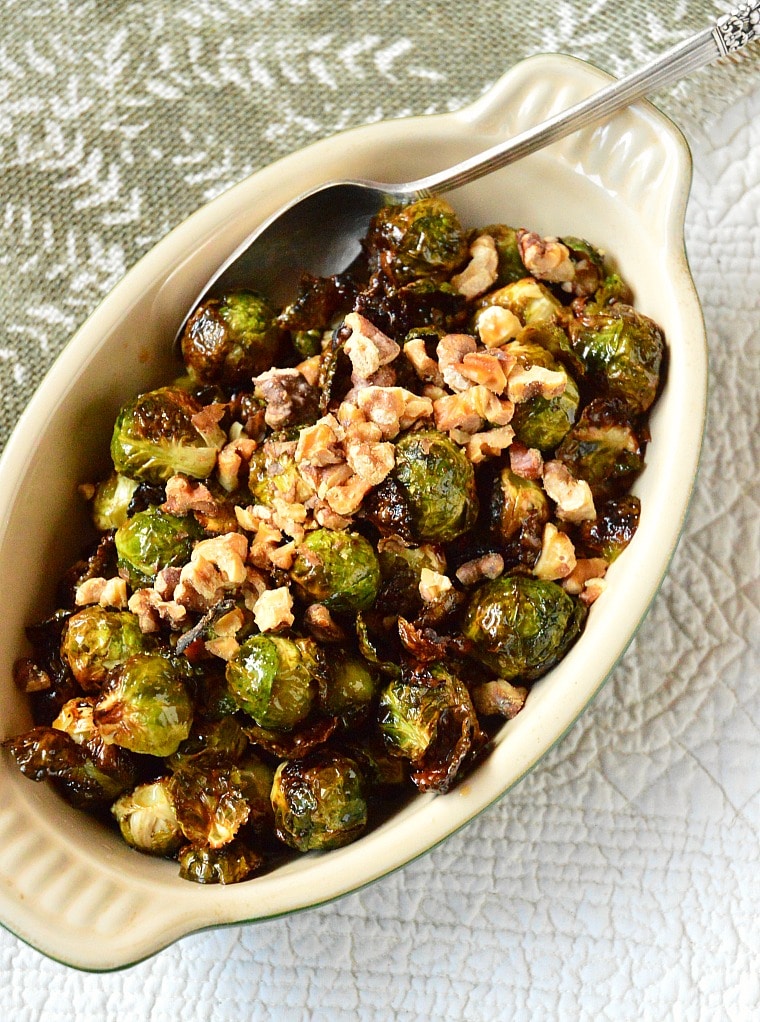 How do you choose fresh Brussels Sprouts?

Make sure they are green. Make sure they are firm. Really, not slimy. Not gray. And the sprouts should be tight. Sometimes I think grocers shave the little buggers and those are old, bad sprouts. Try to buy the ones you can choose yourself. Not the ones in the plastic bags.

So enough about sprouts.

And a few notes about this recipe…

Cook your sprouts however you prefer. Some like to steam them. Some steam and then grill. I prefer roasting. It still gives me that crispy texture. If your sprouts are big, slice off some of the extended bottom and make an x in the bottom to assure they will cook all the way through. I however, do not do this. I just roast them straight up by tossing them with a bit of oil and throwing them on the baking sheet.

The vinaigrette for this recipe requires a nut oil such as hazelnut or walnut oil. I love both. They are pricey, but go a long way. If you don’t want to use them, a high quality olive oil will taste great also.  Nut oils are generally not used for cooking since heating them causes them to lose their flavor and also makes them bitter.

Any nut oil should be stored in the refrigerator because they go rancid quickly. A little goes a long way for flavor! You may have leftover vinaigrette and this is perfect on any green salad. Store in the fridge until you are ready to use it. 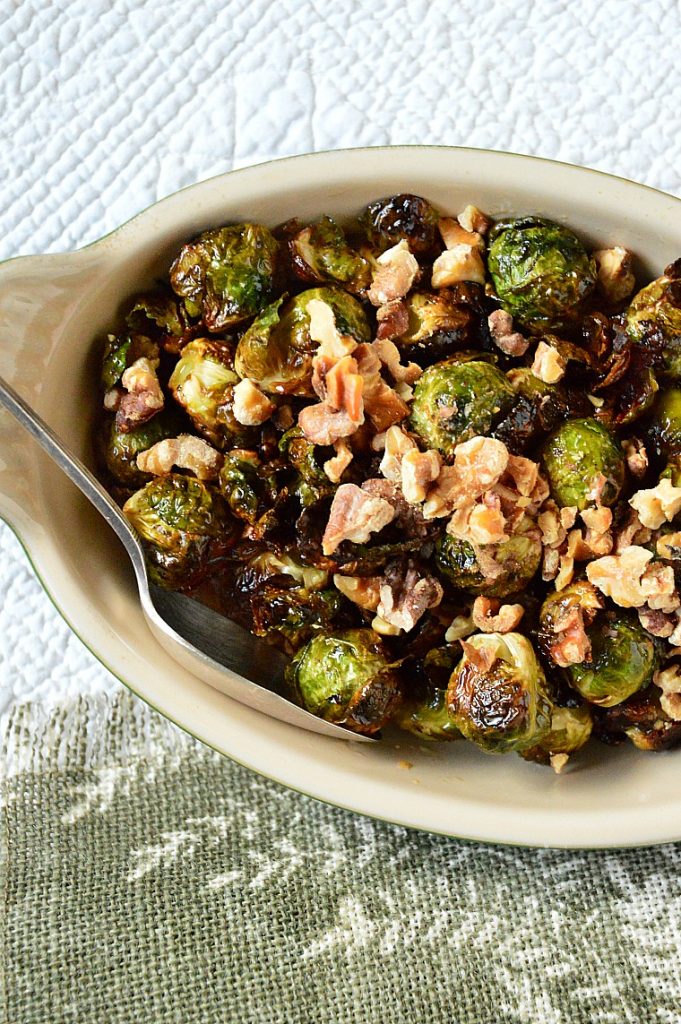 Roasted Brussels sprouts, particularly this recipe, can be embellished with dried cherries or cranberries. Lime zest would be awesome. Want to make this Brussels sprouts recipe more hearty? Throw in some goat cheese or feta. You could also toss in some roasted baby cippolini onions. What I’m trying to say is that these spectacular little green nuggets of joy are an artist’s canvas.

And now I better shut up. I have exhausted my words on Brussels sprouts!

Need a few more ideas? I love this shredded Brussels sprout salad with cranberries and pistachios from Dara at Cookin Canuck’.  I’ve made a similar salad and even Brussels sprouts haters said it was great! Here’s an air fryer recipe for the little green gem. I haven’t tried it but I sure do love my air fryer. Check out Stephanie’s recipe at CopyKat. That about does it. Have fun with Brussels sprouts!

Want to pin this and try it another day? I’d love it if you do! 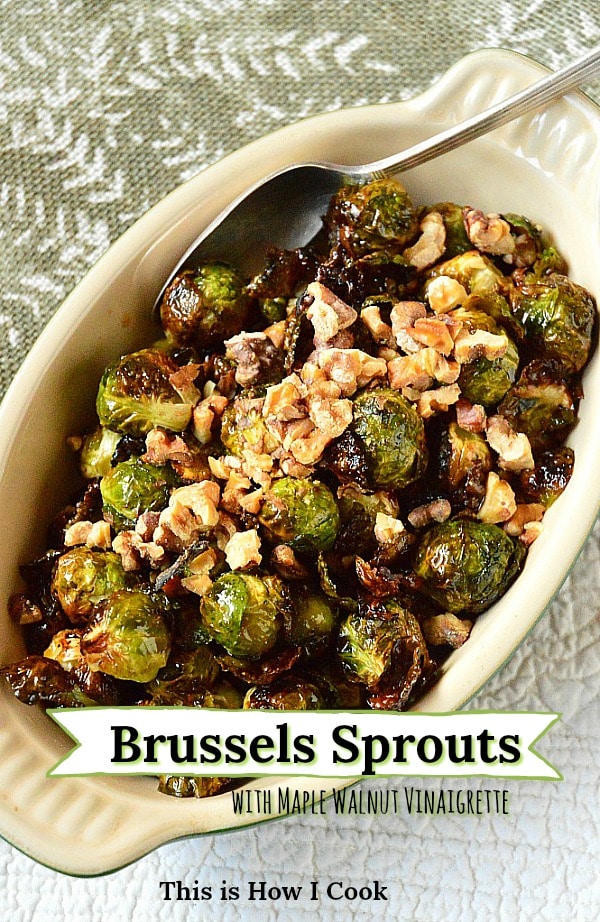 These crispy, roasted Brussels Sprouts are a great side dish and a great appetizer. In fact, there is almost nothing one can’t do with a Brussels sprout.

Salt and freshly round black pepper

Salt and freshly ground pepper as needed for vinaigrette

Toss Brussels Sprouts with 2 T canola oil and salt and pepper. Place on an ungreased baking sheet with space between the sprouts. This allows them to roast. Too close and they will steam. Cook until crispy for about 15-20 minutes. They should be golden and crispy when done with tender insides.

Toast the walnuts or hazelnuts on a separate baking sheet or in a pie time, in the same oven. Watch carefully so they don’t burn. 400 degrees is a bit hot to toast nuts, but I only have one oven. Shake them around a few times while they toast. This should only take about 5 to 10 minutes. The minute you smell them, they are done.

While sprouts are roasting, make the vinaigrette. This may be more than you need so save some for a green salad. It is delicious!

In a large measuring cup, whisk the vinegar, maple syrup and mustard together. Gradually whisk in the oil. Season with salt and pepper.

Toss the vinaigrette with the hot Brussels sprouts and most of the walnuts. Leave some for garnish. Serve immediately.

Need a few more side dishes? 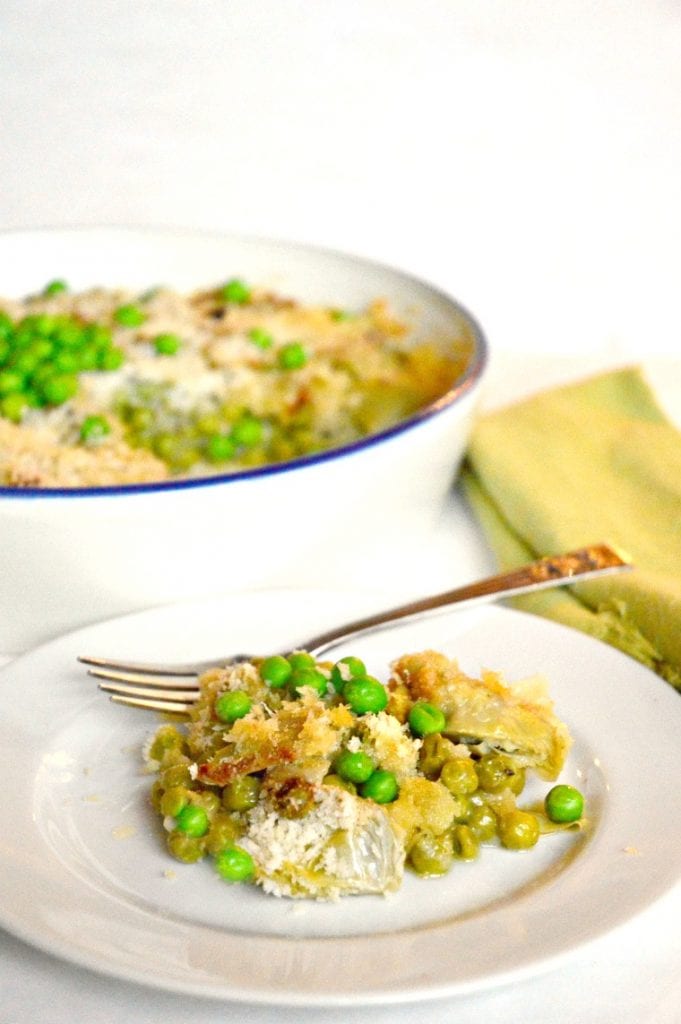 Roasting is one of the only ways I can get my husband to eat Brussels sprouts! I love it when the edges start to get crispy and the center is tender! Makes my mouth water.

Such a great description. I love roasted veggies!

Just over the past couple of years have Bobby and I learned how we like Brussel sprouts and that roasted. So I can't wait to try this recipe! Love those dark brown leaves. Those usually don't make it to the plate. :)

The dark brown crispy ones are my faves!

We hated BS as kids too. But love them now and your recipe for Brussels sprouts sounds amazing! We need a new recipe and so glad you shared this one Abbe!

It's all in the crispy. And the vinaigrette is great on salad, too!

YUM! I have yet to roast any Brussels sprouts this season, but I'll be checking out the produce department and get these on the menu soon!

Never ate them as a kid. So happy my daughter convinced me to try them!

So smart. I just made a cranberry maple vinaigrette yesterday, and I almost used walnut oil in it, but then decided to stick with olive oil. Walnut oil is not cheap! But to actually add the walnuts to the Brussels sprouts? Brilliant!!!

Olive oil works! Just not quite as complex but still delish!