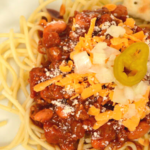 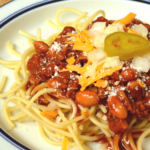 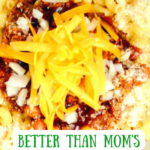 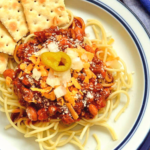 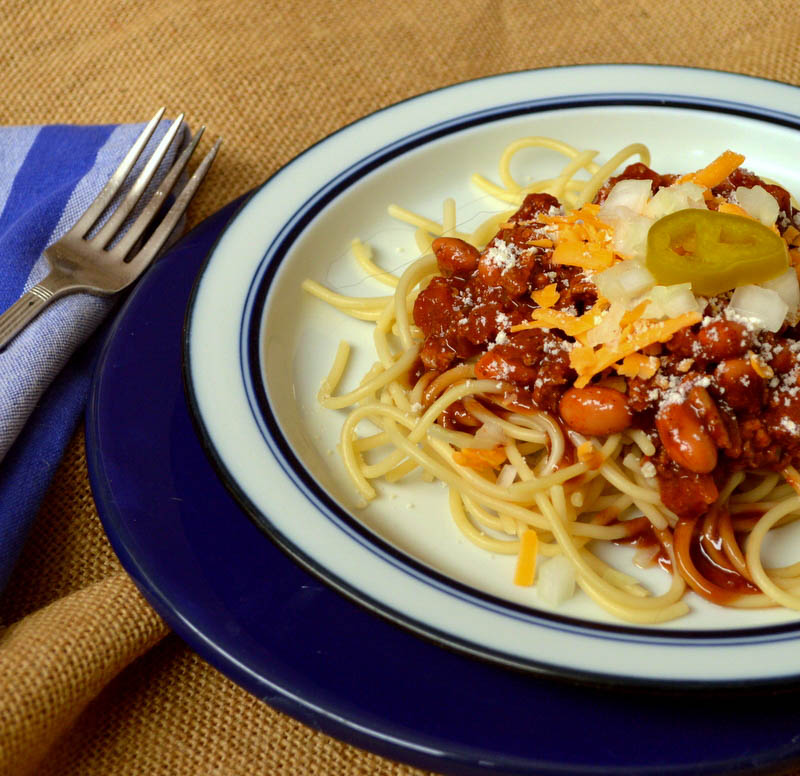 He loves Texas chili; the kind with hunks of meat and deep, dark chipotle, ancho seasoning. He loves it made with hamburger meat, too. And chorizo. 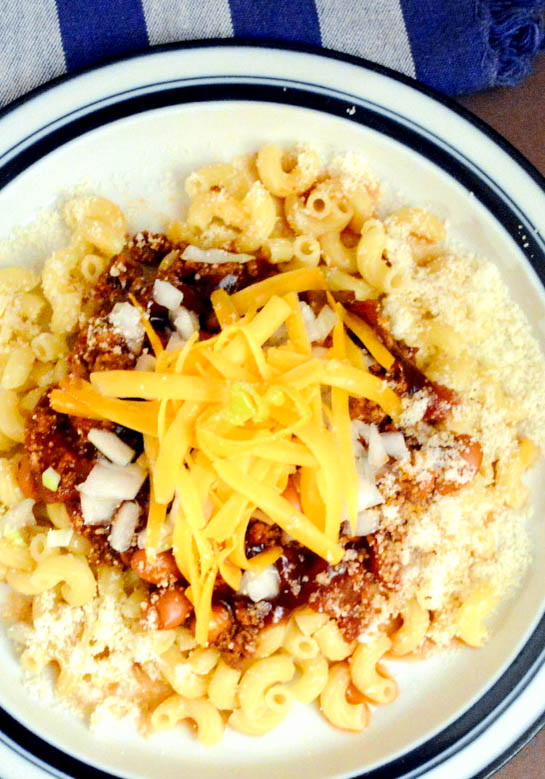 He loves it over cornbread and especially over Fritos. He adores it over hot dogs.

I’ve never seen him eat it over tuna fish but I suspect he might… Well, maybe not, but he does love tuna fish with green chiles.

I, on the other hand, grew up in Illinois. We didn’t eat chili like THAT. 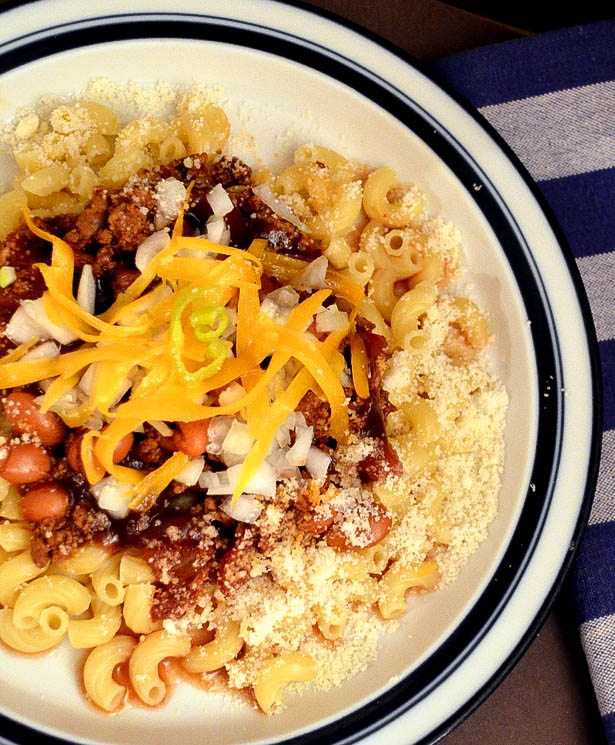 I do not remember cheese or onions served on the side.

But I do remember my mother ordering chili mac three ways whenever we went to Kankakee’s version of Steak and Shake – Wally’s.

This diner was named Wally’s. I don’t know who Wally was but Wally had very good taste in all things diner.

I liked their thin, crispy burgers and my brother loved the pork tenderloin.

We all liked their shakes and thin, crispy, fries.

My father probably had the jello that was always on the counter cut into neat little red or green cubes with a squirt of probably fake whipped cream. 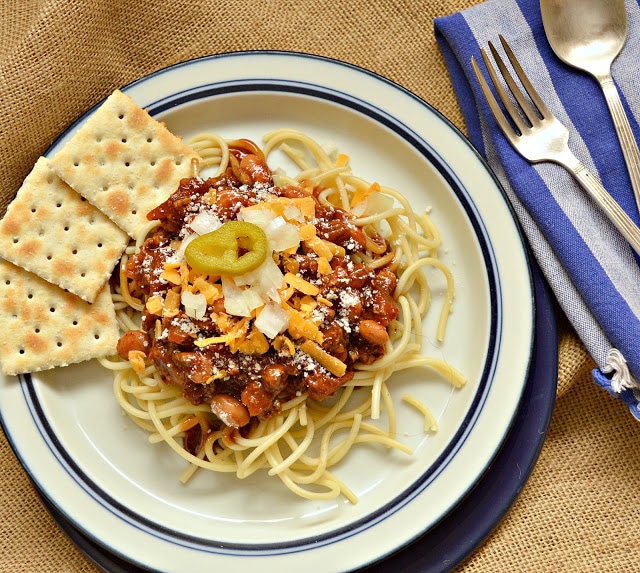 Whatever. I remember this chili mac recipe. I never ate it.

Never had a bite that I can remember. But I did eat the saltines. It always came with a lot of saltines.

And my mother gave us each a package.

But back to chili. I get tired of chili. I wanted a new way to make chili.

One that wouldn’t burn my mouth with heat.

Well, Midwest chili is not known for its heat, at least that I know of. And that is when I remembered my mom’s chili mac that was really Wally’s chili mac.

She always ordered it so I figured it must be good.

And no this isn’t Wally’s chili mac recipe, because Wally probably keeps that hidden.

So I invented this and frankly, it migh be even better than Wally’s! 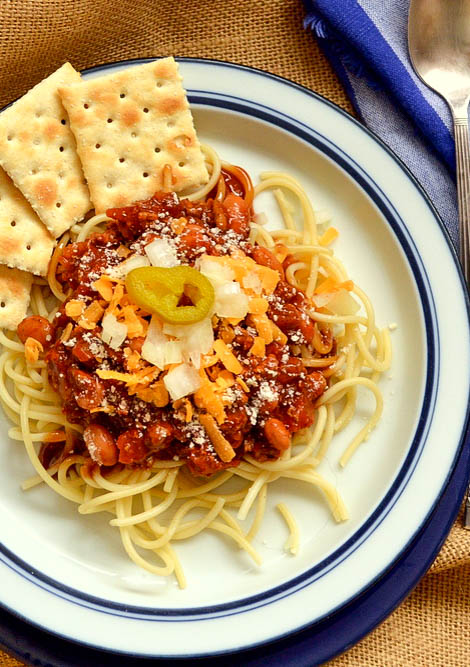 In any case what is featured below is probably not my mama’s chili mac.

But I will tell you that it is really, really good.

And I like this better than Texas chili but let’s not start a fight or anything.

A few notes on making this chili mac recipe:

Begin by making the chili. This is more of a Midwestern chili.

I like to add my own seasonings and create my own chili powder-more or less.

If you only have chili powder on hand and not different varieties of chili powder, that’s OK.

I love the umami flavor that Lipton’s onion soup has and if you use half the packet throw the rest into some sour cream and create some onion dip.

That way you have something to munch on while the chili is cooking.

Pinto beans are optional and sometimes I don’t even mix them into the chili.

Toppings are my favorite part.

Chopped onion, grated cheese, parmesan cheese from the can and pepperoncini, pickled jalapenos-whatever you want.

Diner style means serving this with a packet of Saltines or oyster crackers and a can of dried parmesan on the side, but that is up to you.

Spaghetti or elbows? The choice is yours. I prefer spaghetti!

BBQ Sauce? Yes, that might confuse you and though it isn’t essential, to me it is.

I love the tinge of sweetness that this gives to the chili mac.

Top everything off and mix it all up until you have a messy plate.

Dive in. This chili mac recipe is comfort at its finest!

I love tis diner style chili mac recipe. So good, and not too spicy!

1 can pintos, drained and rinsed

Canned Parmesan cheese at your discretion

Brown turkey over medium heat and crumble it as it cooks.

Add onion and garlic and cook for about 2 minutes. Push to side and add chili powders, oregano, allspice, and paprika. Cook for a minute or so until spices are toasted. You will smell them.

Add can of tomatoes, cocoa, onion soup mix, ketchup, mustard and Frank’s hot sauce. Let simmer a few minutes until liquid has disappeared by about half.

Stir in can of beans. Now stir in water and let simmer about 10 minutes. It should still look like a thick gravy but not be so thick as to not have liquid. If you let it sit a bit too long and it gets too thick just add a little more water. It can take it!

Mix ingredients together and shake or stir until sugar dissolves.

Place a serving of pasta on a plate. Top with several spoonfuls of chili. Spread the chili with 1 T  of BBQ sauce or to taste.

Top with some spoonfuls of diced onion and then the grated cheddar. Feel free to use the Parmesan out of a can. And just for good measure I topped my chili off with a few pepperoncini slices, but you could use jalapenos. If you like saltines-go for it!  Crumble a package of oyster crackers on top or some Saltines straight from the cellophane!

Abbe I grew up a few blocks from Wallys. they had great food and I remember the chili and jello. Thank you for the recipe and a lot of great memories. oh and the building is still there it is a Mexican food restaurant now.Jim from Bradley, il.

A magical dish of comfort ! I still go to the Steak and Shake when we are back in Illinois to eat this. And I order it with no beans ! Thanks for your version, abbe. I'm going to make it with my gluten-free spaghetti. Love, Mom

Shut Up and Cook | The Attainable Gourmet

Can you say comfort food? This sounds fantastic! Sign me up!

Natalie, I have to confess that since I came up with this I've made it twice. It really is addicting...Try it with spaghetti. I liked that best!

You just paired two of my fave comfort meals into ONE magical meal, this looks AMAZING.