These chocolate chip cookie dough brownies are so real! They are perfect for the days when you can’t decide between brownie or cookie! 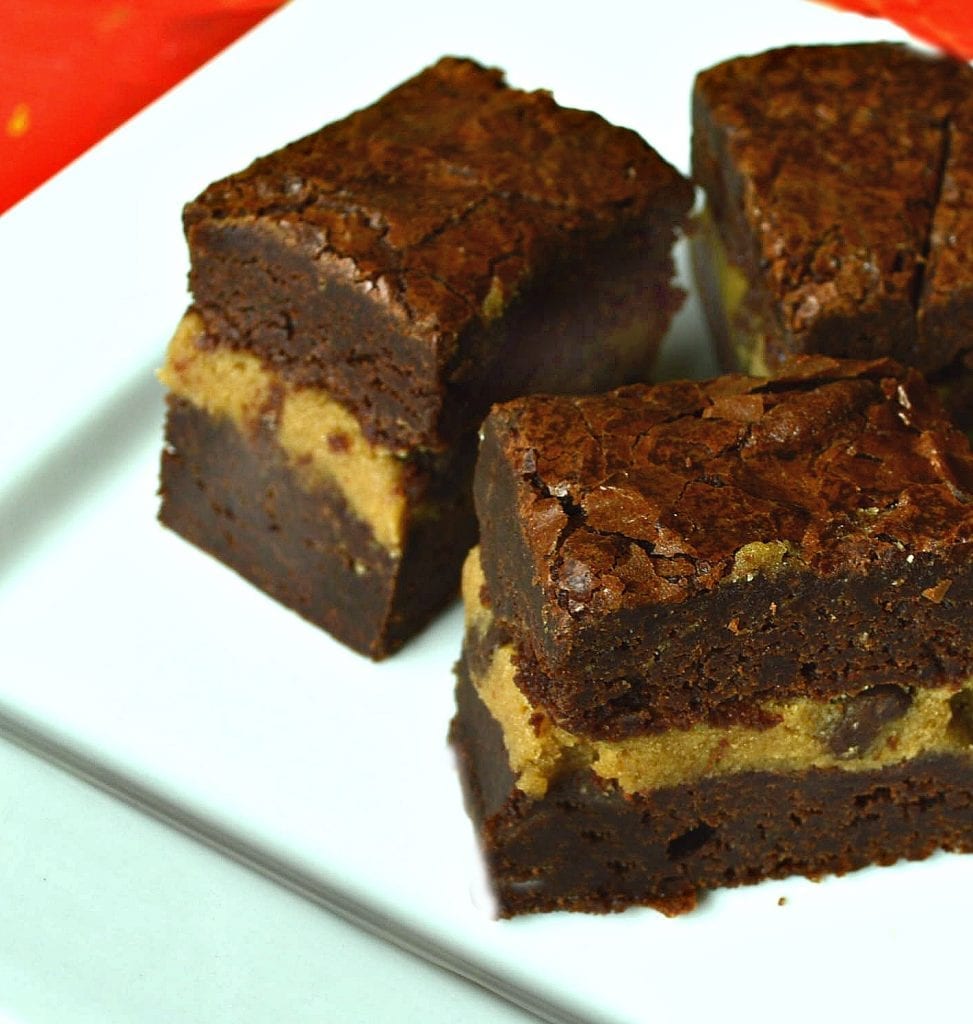 The weekend was supposed to find us watching Alex ski joring in Minturn outside of Vail. Due to mysterious reasons the event was canceled and we didn’t get to see Alex on skis, being towed by a galloping horse, all the while going over small jumps and collecting large rings on his arms. Another event is scheduled next weekend in Leadville which we won’t be able to attend. I will have to find someone else that can feed this horse carrots and apples and stroke his nose, and tell him to gallop carefully and straight while pulling my crazy son behind him.

In any case, we decided to still drive to Vail and see Alex Odie San Odenator or whatever name he is currently going by, because, we, well, we miss him. So Sunday afternoon found us packing Freddie in the car along with coffee mocha cookies and cookie dough filled fudge brownies and other alcohol related goodies, and driving to see Alex. As you must know by now there is never a dull moment when Alex Odie San Odenator is around. And this weekend did not disappoint.

After seeing his current accommodations which are quite unique and located in the center of Vail Village with parking and laundry, don’t you know, the parental units gave their stamp of approval. Alex Odie San Odenator scored again.

That is if little Freddie didn’t get him kicked out by barking when we went out for three hours for dinner. Apparently, the landlord doesn’t approve of cute little dogs even if they only stay for three hours.

And it is apparent that said landlord does not approve of much except intimidation. He can contact my attorney as text messages to my son with four letter words in them don’t solve anything. And besides anyone that knows anything, knows that using four letter words is a sign of someone that doesn’t have a very good vocabulary. Or much class. But we won’t go there. 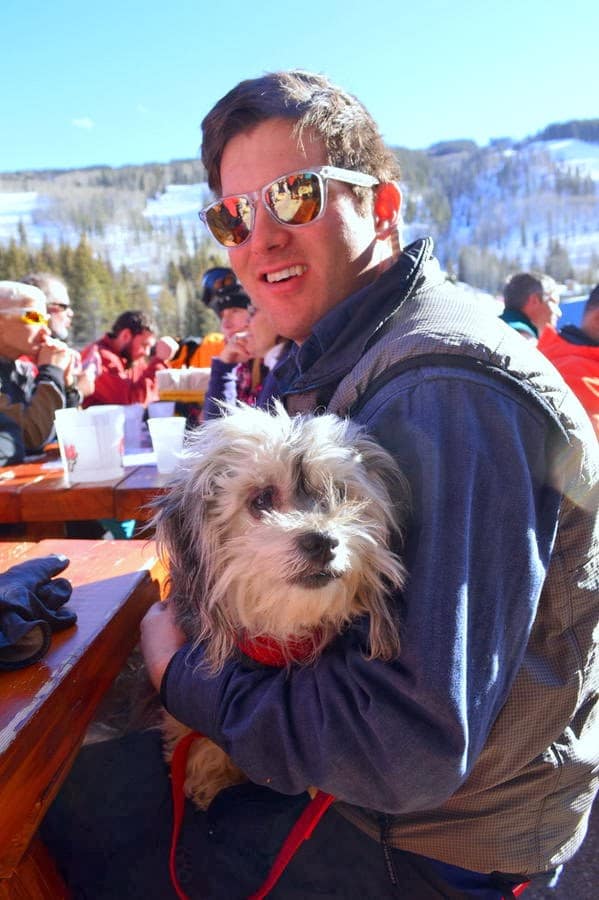 Well, Sunday night found us dining at Matsuhisa that Alex Odie San Odenator works at. Only last night he wasn’t working. He was dining in fine style accompanied by his loving parents. And what a treat we three had.

After handing over a fine mix of fudge brownies and coffee mocha cookies we were led to the sushi bar in this enormous restaurant. The sushi bar is small and quiet and fun and we were able to visit with the sushi chefs as they worked. It was also one way to the kitchen where numerous friends of Alex Odie San Odenator emerged and popped by to say how good these treats were. And also to say how great Alex Odie San Odenator is. Besides basking in the glow of the awesome food coming our way I was certainly basking in the glow of having such an awesome son. And it wasn’t even Mother’s Day! (Motto: Always bring cookies!)

I can’t wait to tell you about the amazing delicacies we ate at Matsuhisa, but that will have to wait until tomorrow.

My guess is you’ll want the recipe for these fudge brownies. If you are the cakey type, you won’t. I baked these brownies in a 15×10 pan on parchment paper in order to be able to cut the brownies in half and stack them after filling. These can also be baked in a 13×9 pan which will give you a thicker, more substantial brownie. One need not fill these. One could just eat the filling without the brownies. (You know who you are, don’t you?) Or the brownies without the filling. Any way you choose you can’t go wrong. 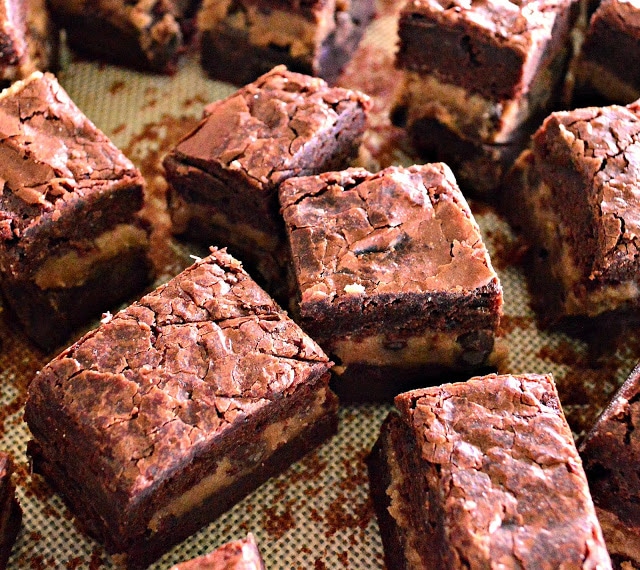 The brownies on their own are quite amazing. Chilling them after cooling produces a great fudge texture. So if you can hold off, definitely go for the chill. Of course, you could also fill them with the butterscotch from the preceding recipe. The possibilities are endless. I made them like this because Alex Odie San Odenator loves cookie dough and brownies. Being the kind person that I am, I try to accommodate.

Being the unkind person that he is-meaning the above mentioned landlord- well, Alex Odie San Odenator is under strict orders to not share. Especially with those who use four letter words about very cute little dogs.

Tune in tomorrow for more about Matsuhisa and our incredible meal. And also get the recipe for some insanely simple coffee mocha cookies. Paul Prudhomme approved-no less! Yes, we are moving into Cajun week!

So, on a need to know basis-who would you not give cookies, to? This is between you and me, OK? 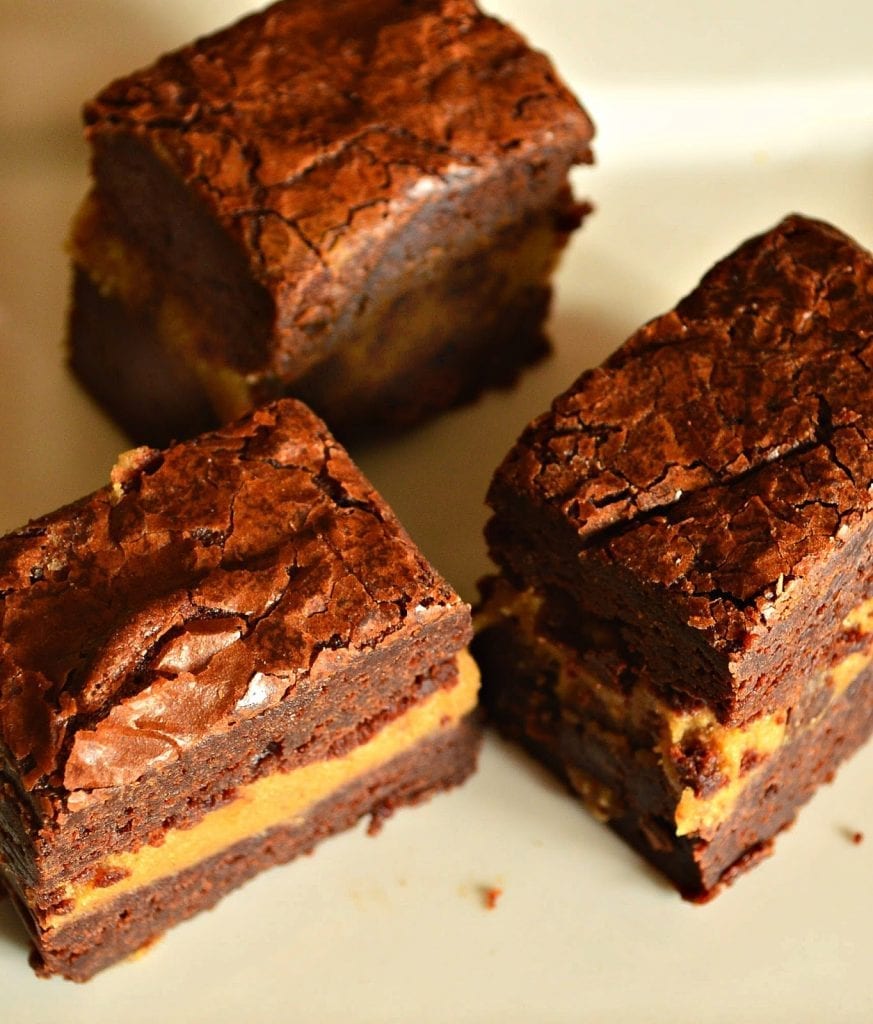 These fudgy brownies are made even better with the addition of cookie dough filling. Rich and so, so good!

Preheat oven to 350. Line a 15×10 pan with parchment paper. You could also grease with butter and dust with flour but it is easier to cut the brownies if you can lift them out of the pan.

Melt chocolate and butter over low heat while stirring to avoid scorching. Let cool in pan to room temperature.

Beat in eggs and salt until yolk is incorporated. If you want a lighter, brownie, beat this mixture until light and fluffy, but I like a dense, chewy, fudgy brownie!

Stir sugar and vanilla into the cooled chocolate mixture. Then add flour and fold until gently combined.

Spread batter into prepared pan and smooth the top. Bake about 20 minutes. If you stick a toothpick in it will come out with batter on it. Just make sure that the batter is well set before pulling from oven. The top should be shiny and puffy.

Let cool on counter and then refrigerate over night.

Mix butter and brown sugar until sugar and butter are one. Add vanilla and salt. Stir in.

Now slowly stir in powdered sugar and chips until well combined. This should be spreadable and not too thick. Do not eat out of bowl with fingers or there will not be enough for the brownies!

Assembly:
Take pan of brownies from fridge. (You didn’t rush this, did you?) Remove  from pan by lifting parchment and placing on counter. Now slice in half down the center of the pan width wise. You should have two sides about 7×10. Spread filling on one half. Top with other half up, shiny side up. Press down a bit and slice into small bars. This is rich, people!

*Does not include chilling time 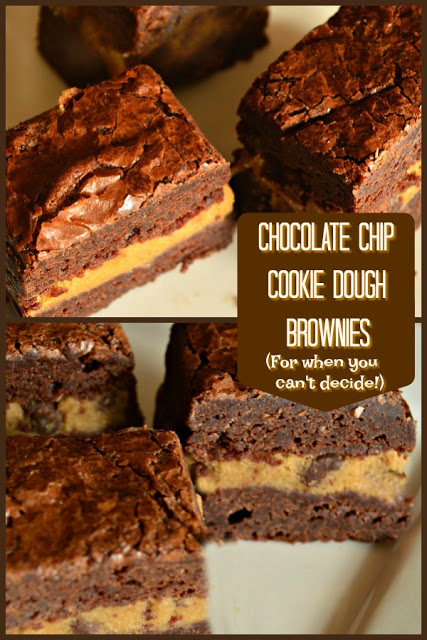 Great story and this brownie looks so decadent I don't think I could just stop at one. I have never of this sport before ski jouring. Thanks for the nice post.

Another great recipe Abbe! And, we love your stories!