Skip to Content
Jump to Recipe
This Mexican chicken stew is made with jarred salsas and beer. Add in some garlic, chicken stock and cilantro and you have a great meal for a chilly day! 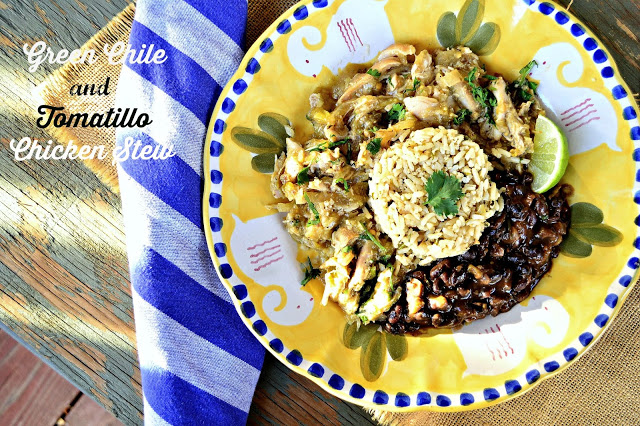 Friday night found me with Manservant arriving home late. Well, that is nothing new especially when he is dependent on an airplane.

He flew in from Plano, (how exciting!) and barely made it out before the rains came forth.

Anticipating this and his need for a real meal, I decided to make this stew, that was actually called a mole, but I think stew is more appropriate.

It worked out perfectly, because it reheats perfectly in the microwave. Understand this kitchen closes by 8, and I prefer all dishes stashed by then. He made it by 8:45, and his plate was waiting.

It was a quick weekend of packing and repacking, and now he should be in Korea, though I haven’t received the phone call.

He will be there this week, then he will fly to China and see Alex OdieSan. I am not happy that I am not on this trip!

Manservant has explicit instructions to take pictures of Number 1 son’s apartment and to take his roommates out for dinner. He best comply or else!

Said trip also includes a visit to an old friend of his in Shenzhen, where he tells me he will take Alex for the best spa treatment ever.

I feel I deserve the same, only mine will probably cost a lot more than both of theirs! 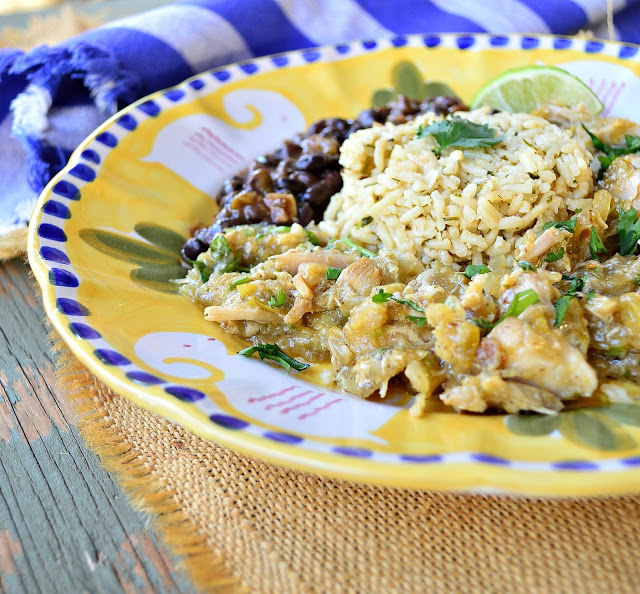 Halloween will find me at a friend’s house, which is good. I always get a bit forlorn when I remember the special ‘Ween’s of the past.

We live in a small neighborhood, but we always got together on Halloween. The older kids would take the younger ones around treating, as the adults ate and talked and maybe drank.

We would then always get first dibs on the best candy they brought home, if we were lucky. Of course we never got lucky!  Usually that meant getting a teensy Mound’s bar, but no Hershey’s or Reese’s!

There is one other reason that it may not be best to be here for Halloween. It seems my pumpkin is quickly disappearing. 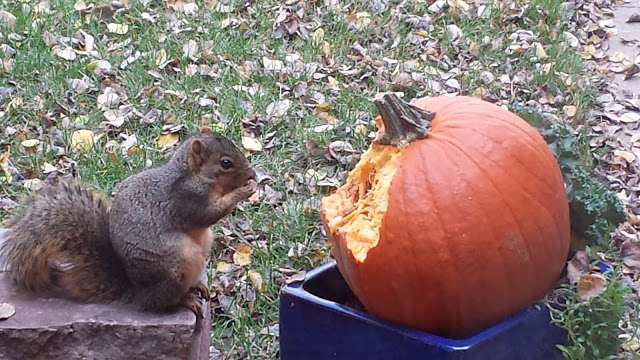 My remarkable and quickly growing puppy, has taken up residence on the table behind the couch, and getting quite agitated every time Mr. Squirrel comes in for a bite.

Of course I am getting quite agitated, keeping him off the couch!

And P.S. I just learned there are more Siberian tigers in the world than Skye terriers! 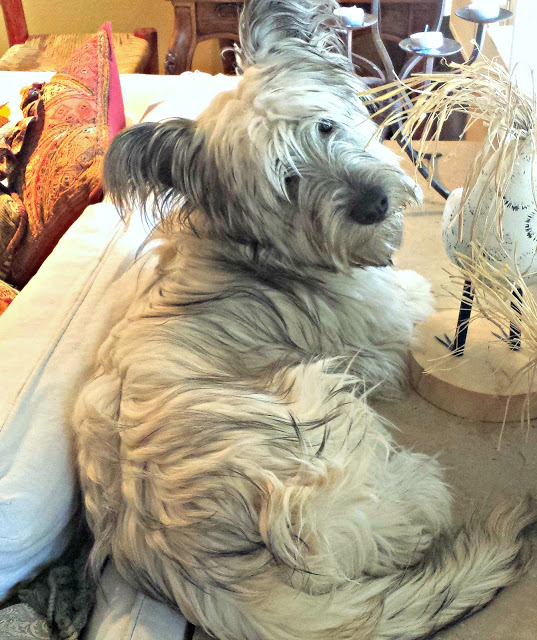 How To Make Mexican Chicken Stew:

But back to this Mexican chicken stew. I decided spur of the moment to make it and it required tomatillos.

Not being near the grocery that had them and being too lazy to go and get them, I kind of punted.

It was a good punt and I scored. Instead of tomatillos I used two jars of salsa.

One was a green chile salsa and the other a tomatillo. What a simple way to do business! The chicken could also be substituted with turkey. Yes, that season will soon be upon us!

This would be a perfect meal  for Halloween. It reheats very well, keeps a long time on the stove top or even in the oven, and isn’t too spicy for the little ones.

This is great as tacos, but we enjoyed it as is, with beans and rice. A squeeze of fresh lime gives this an extra punch.

I’ve been munching on it all week and it even gets better as the flavors have a chance to meld together. Buying a rotisserie chicken will save you several steps and a lot of time.

I did brown and stew my own chicken, but no worries. Buy the chicken if you want and just remove the skin and bones and add the meat to the stew.

Have a great holiday and don’t let the squirrels get your pumpkin! Those little goblins have big teeth! 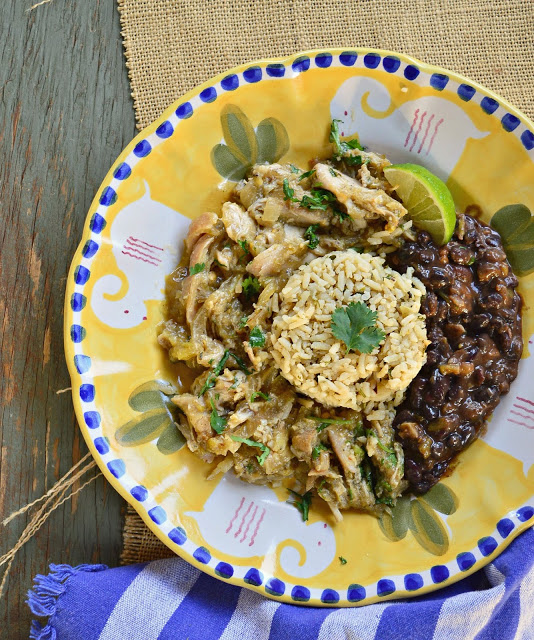 Save and Pin to Make Later:

This easy Mexican chicken stew really satisfies on a cold day. It has to simmer until the chicken falls off the bone, but it is so worth it!

Preheat oven to 300. In a large Dutch oven, heat oil over medium high heat. Season chicken on all sides with salt and pepper. Sear, without crowding pot, until golden brown on all sides. Reserve on a platter.

Reduce heat to medium and add the onion, and garlic to the pot and cook until brown, about 7 minutes.

Deglaze Dutch oven with the beer and bring to a simmer. Then add salsas and chicken stock.

Return to a simmer and add the chicken and cilantro stems. Cover and place on the middle rack in oven. Cook until the meat is tender and falling off the bone, about 2 hours.

Remove chicken from the sauce and let cool until you can handle it. Remove the cilantro stems and discard.

Place Dutch oven over medium heat and simmer uncovered until the liquid is reduced by almost half. This should take about 20 minutes.

Remove from heat and stir in the cilantro leaves and lime juice. Adjust seasoning as necessary. Once the chicken is cool enough remove the skin and meat from the bone. Shred and place back in the sauce. Rewarm chicken in the sauce and serve.

You know that I'm in heaven with this dish! WOW! Love this green chile chicken stew!!!!

Love a good chicken stew! Your stories are so funny- you crack me up!

Great stew Abbe! Though I can't find tomatillos here, I always hope they will appear in the market one day, just like kale finally did. Your stories always make me laugh, and that dog gets cuter by the minute!

I love your Dog! Prize pic with the squirrel even though he was being mischievous okay maybe annoying.The stew looks like THE best. Perfect for fall. Well actually it would be perfect for me any time.

Now you just hold your horses about Plano! It has a Ruth's Chris, a Chuy's and P.F. Chang's. It doesn't get more exciting than that! — I'm submitting your name to become an honorary Mexican. This recipe is more authentic than you might know. And it looks great!